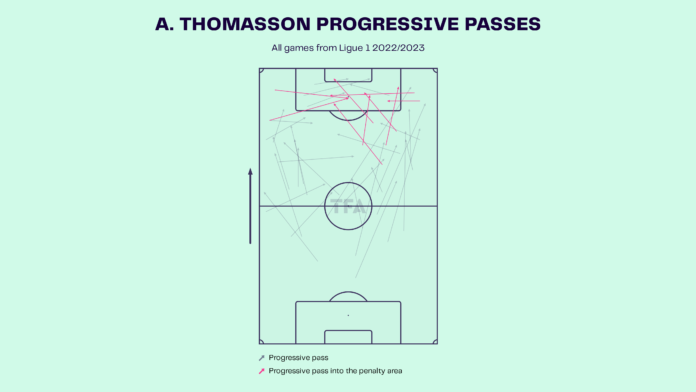 Adrien Thomasson is a French professional footballer who plays as a midfielder for Ligue 1 club Lens. Thomasson began playing youth football with local club Evian before turning professional with the club’s senior side. He plays as a central midfielder, and on January 12, 2023, Thomasson signed for Lens on a three-and-a-half-year contract. He was previously playing for Strasbourg and provided strength in the midfield. He made 15 appearances for Strasbourg in Ligue 1 in 2022/23 and also provided two assists. In the previous season, Thomasson scored eight goals for Strasbourg, having made a total of 31 appearances. He has the ability to play as a box-to-box midfielder and offers much-needed control for his team. His ability to move the game forward is much more beneficial for his side, and his ability to provide defensive support is also one of the reasons behind Lens’ interest in the player. Below are some of the stats for Thomasson from Ligue 1 over the seasons. 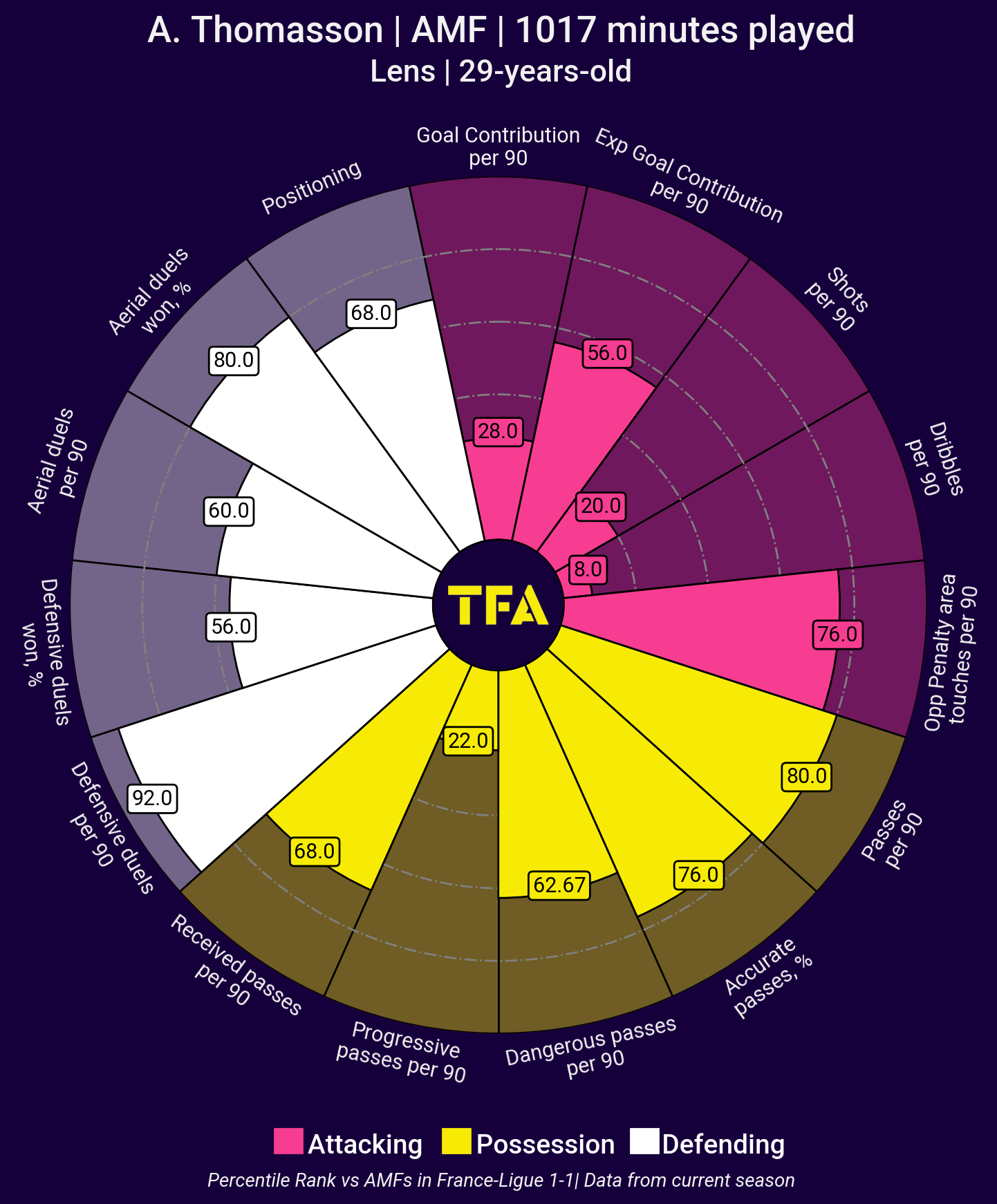 The above viz shows his percentile rank compared to the other midfielders in Ligue 1. Thomasson’s defensive stats are excellent for a midfielder. He is ranked highly for winning aerial duels. The player’s ability to attack has been decent. He is ranked fairly for shots and dribbles. He has also maintained decent possession stats and ranks well in passing abilities.

Display on the pitch 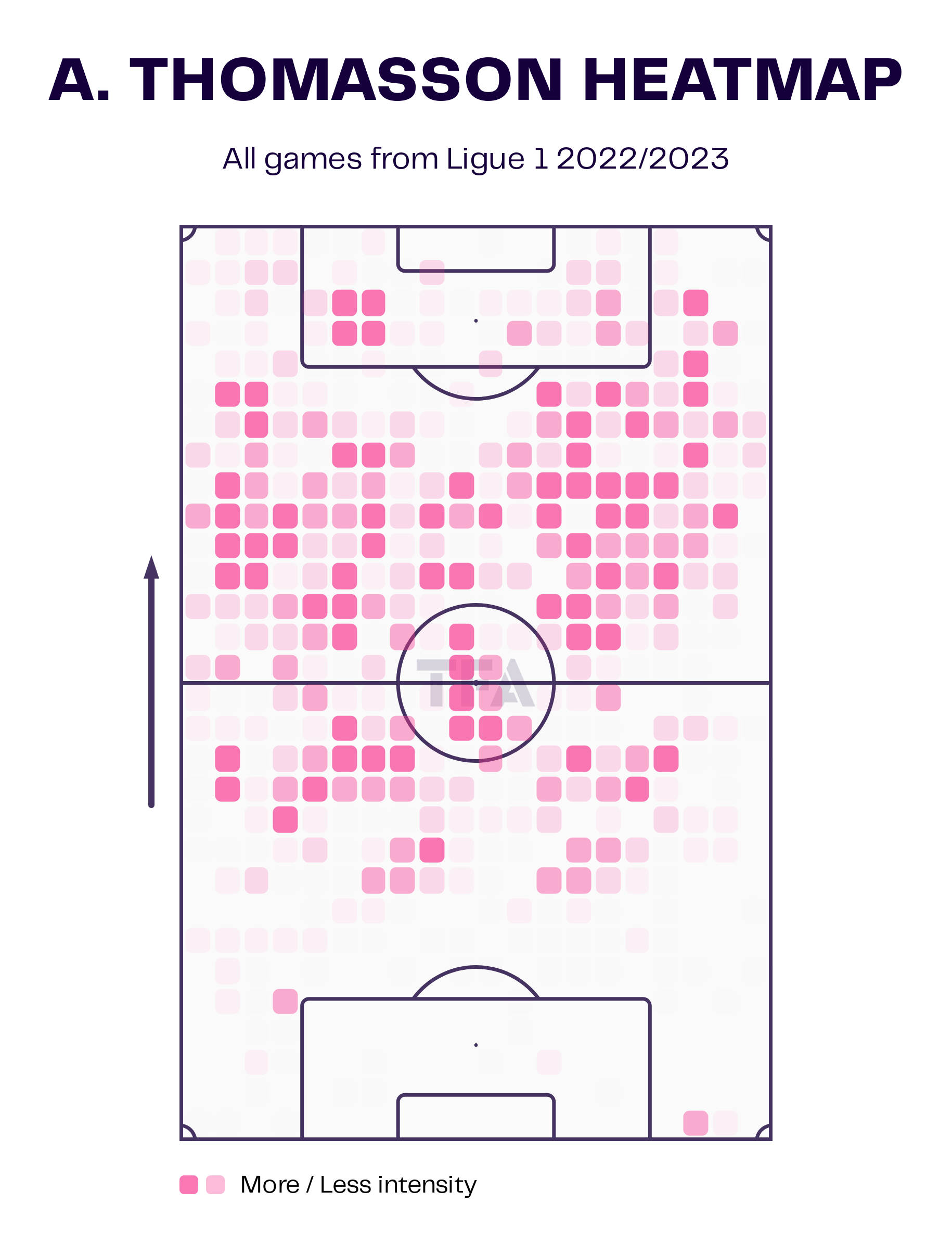 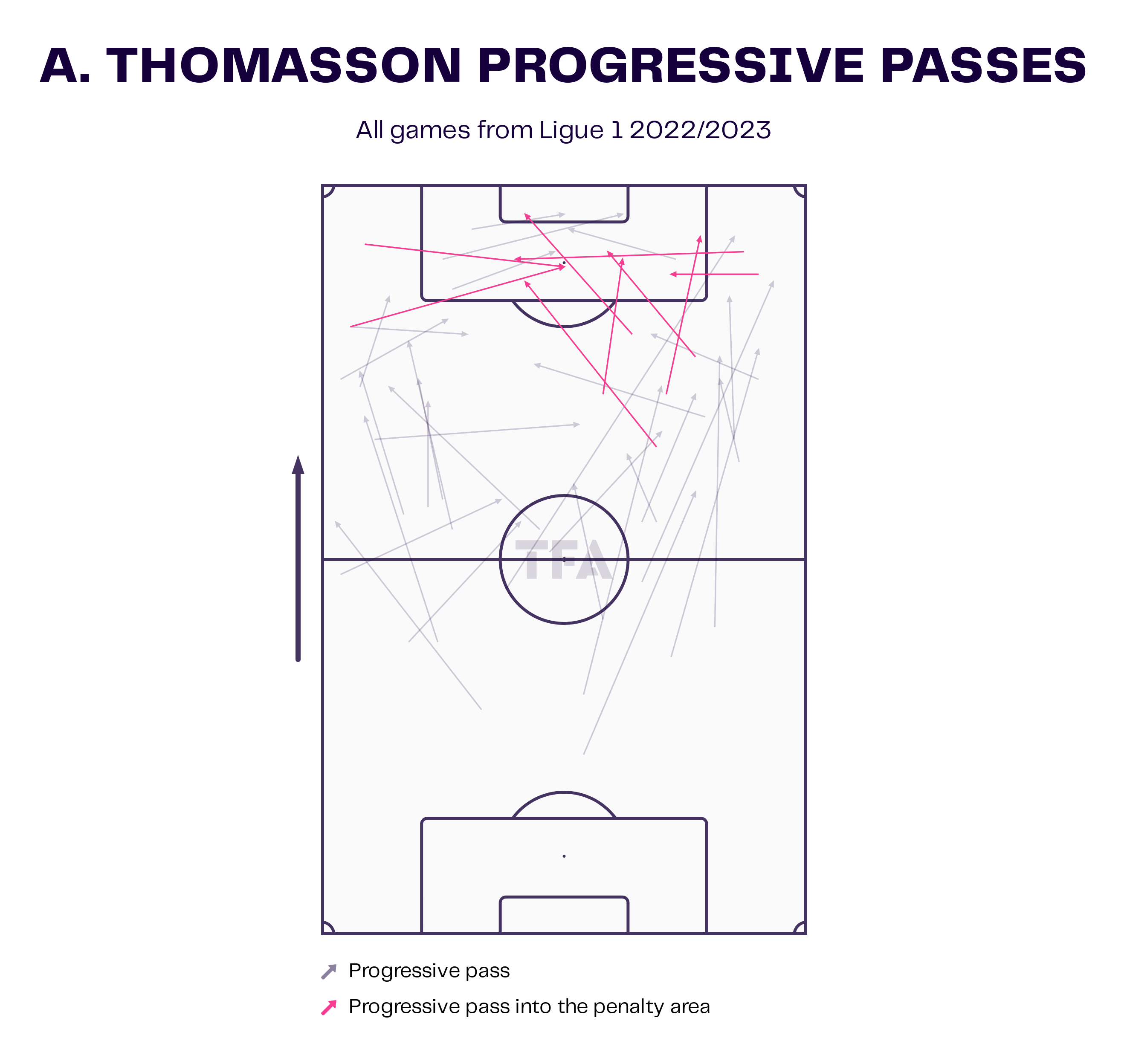 Adrien Thomasson covers the entire midfield area in the middle third for Lens. He is primarily a holding midfielder who likes to maintain possession and provide a passing option. He also performs defensive duties, and most of his intensity can be seen in the middle of the pitch for his team. Adrien usually plays in the centre of the midfield and makes movements up the pitch in order to create an attacking threat and receive the ball in dangerous areas. Adrien makes 44.7 passes on average per 90, with a completion rate of 84.3%. It can be seen that the player makes many forward passes, averaging 11.42 per match, and makes 4.16 passes to the final third per 90 minutes. 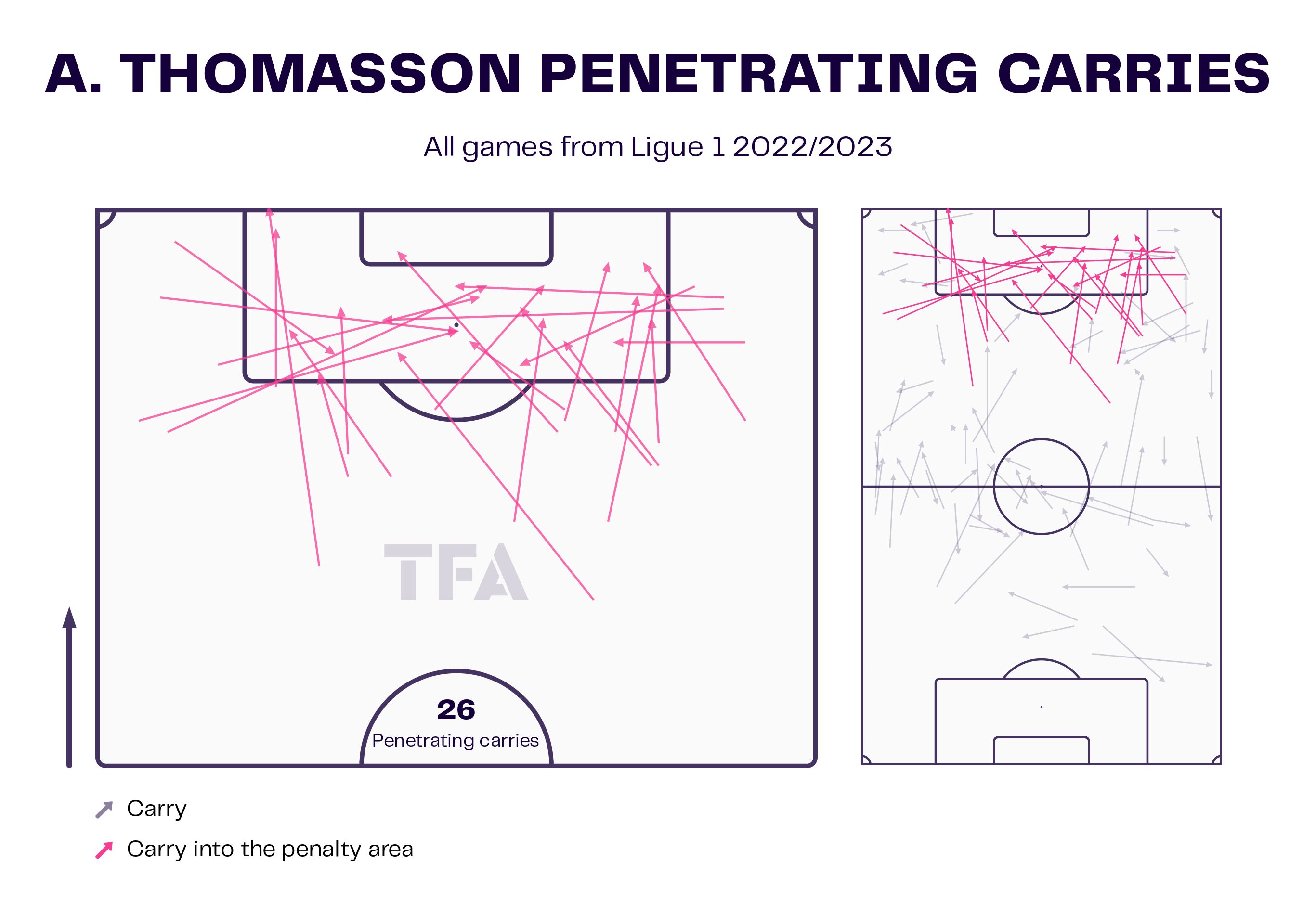 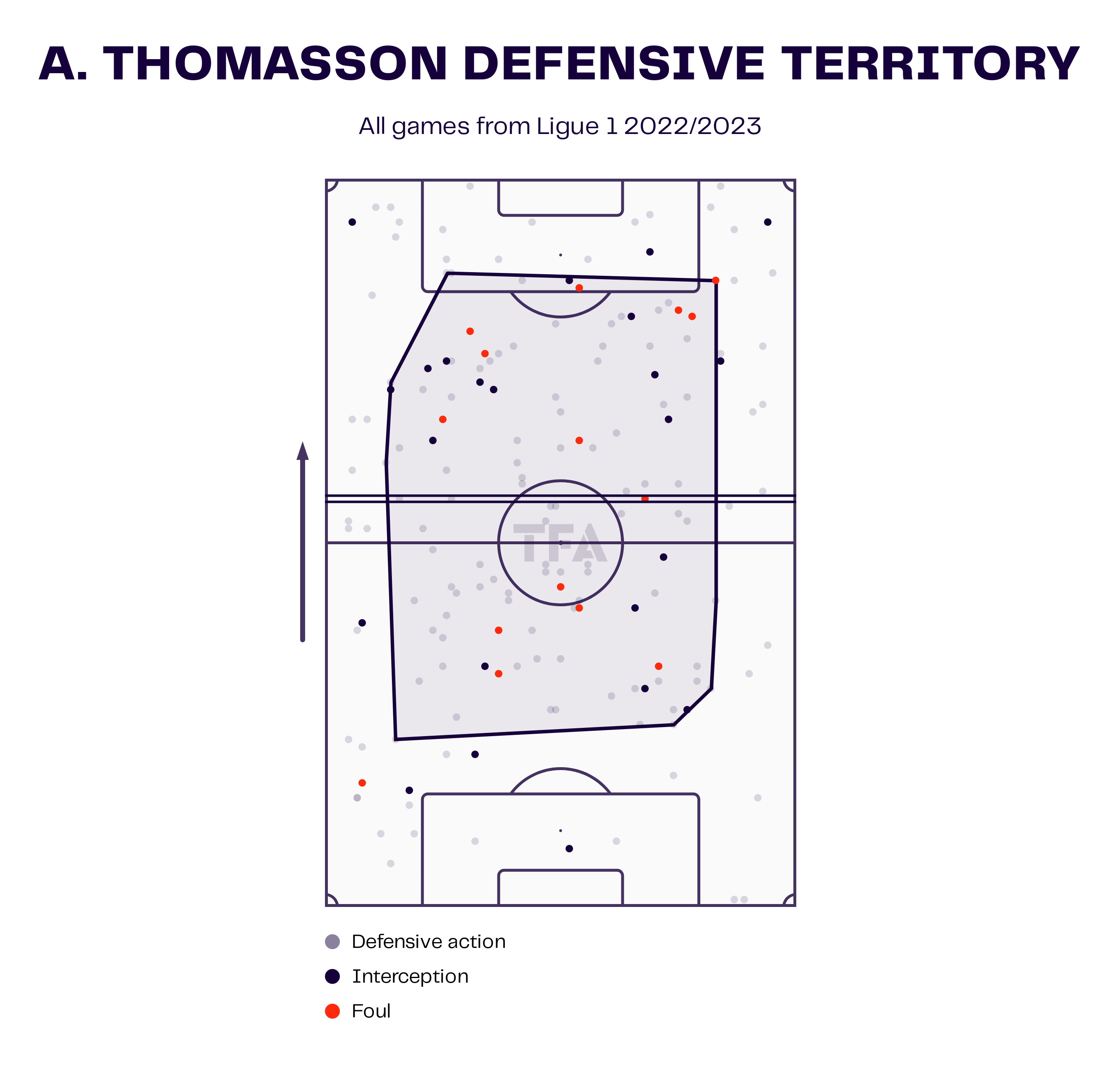 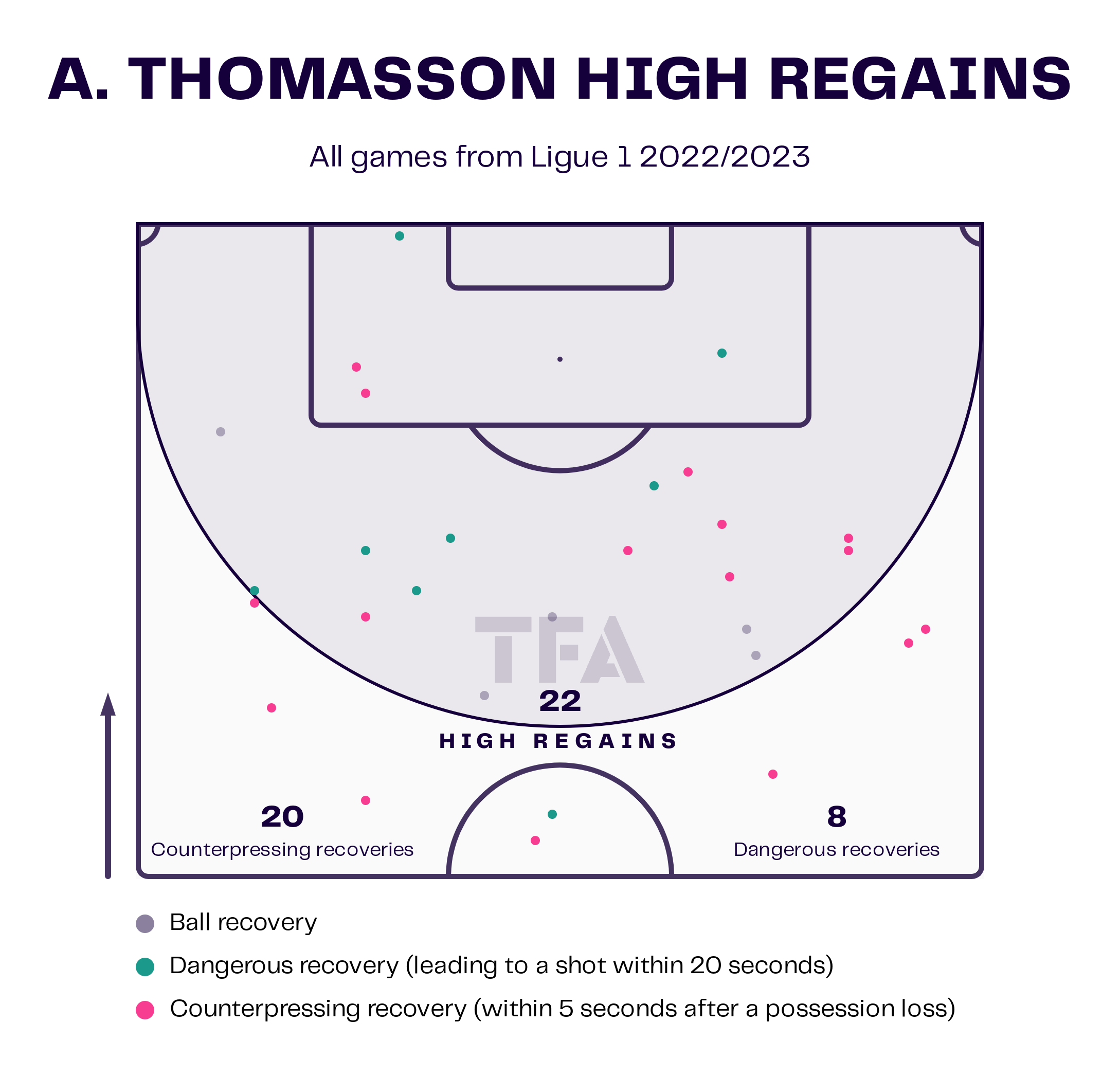 The above viz shows the defensive territory and various high regains of the player for Lens in Ligue 1 2022/23. It indicates that Adrien is involved in a lot of defensive actions in the defensive third and makes interceptions near the defensive and middle thirds. It can be observed that the player has not given up many fouls and has averaged only 1.8 fouls in the current season. Overall, he has an average of 21.9 duels per 90 and a 44.8% win rate. Adrien averages 3.1 interceptions per 90 minutes and makes a lot of movement in the opposition’s half in order to put high pressure on the opposition’s midfield and final third. He makes 6.02 successful recoveries in the opposition’s half per 90.

In front of the goal last season 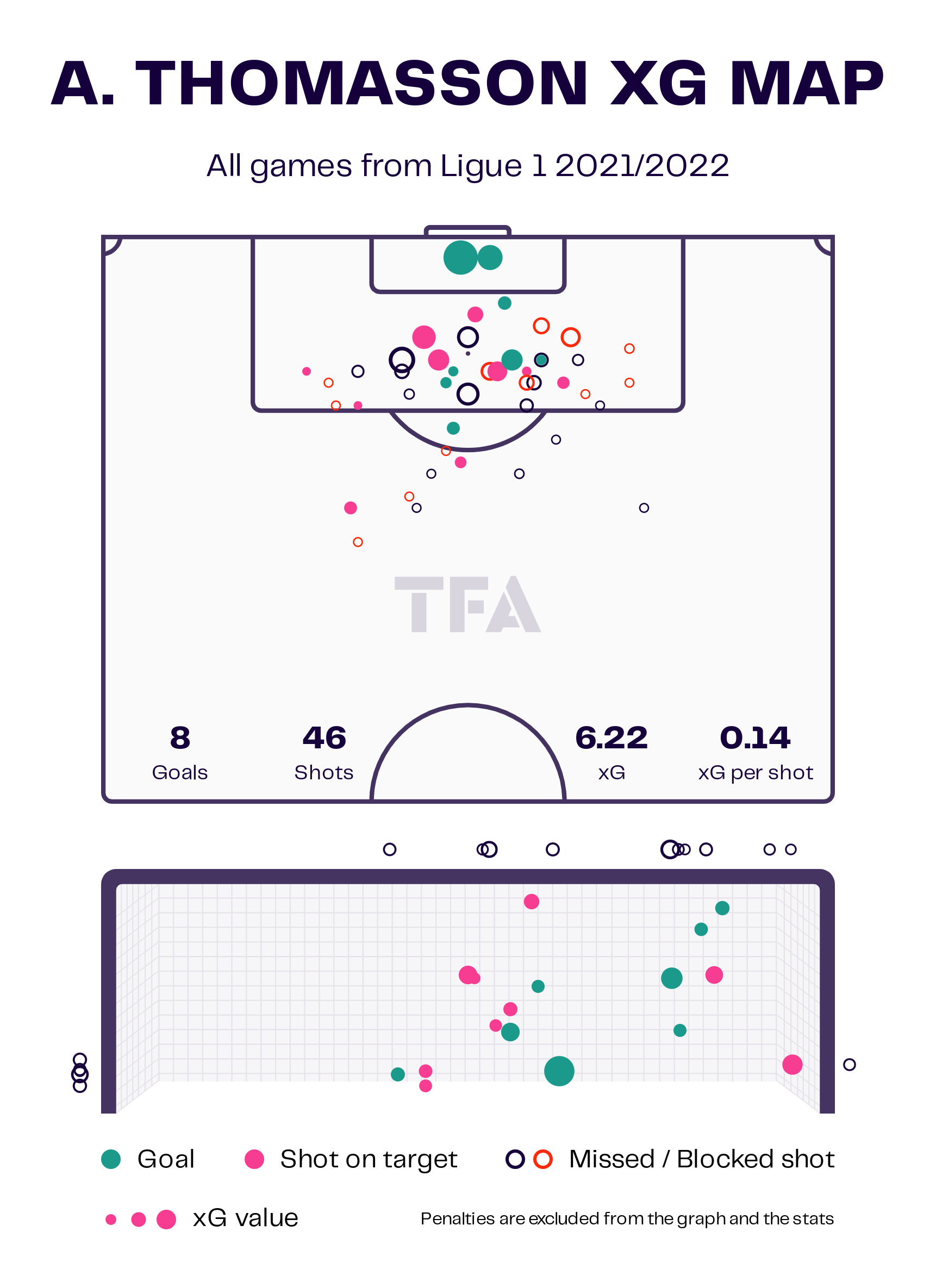 The above viz shows the shot map for the player in the last season. Adrien is decent in front of the net and scored eight goals last season from a total of 46 shots. He got the majority of them from inside the box, with one long-range attempt. He ended the season with an xG of 6.22 and an xG per shot of 0.14. His ability to grab goals when needed is also a huge boost for Lens. 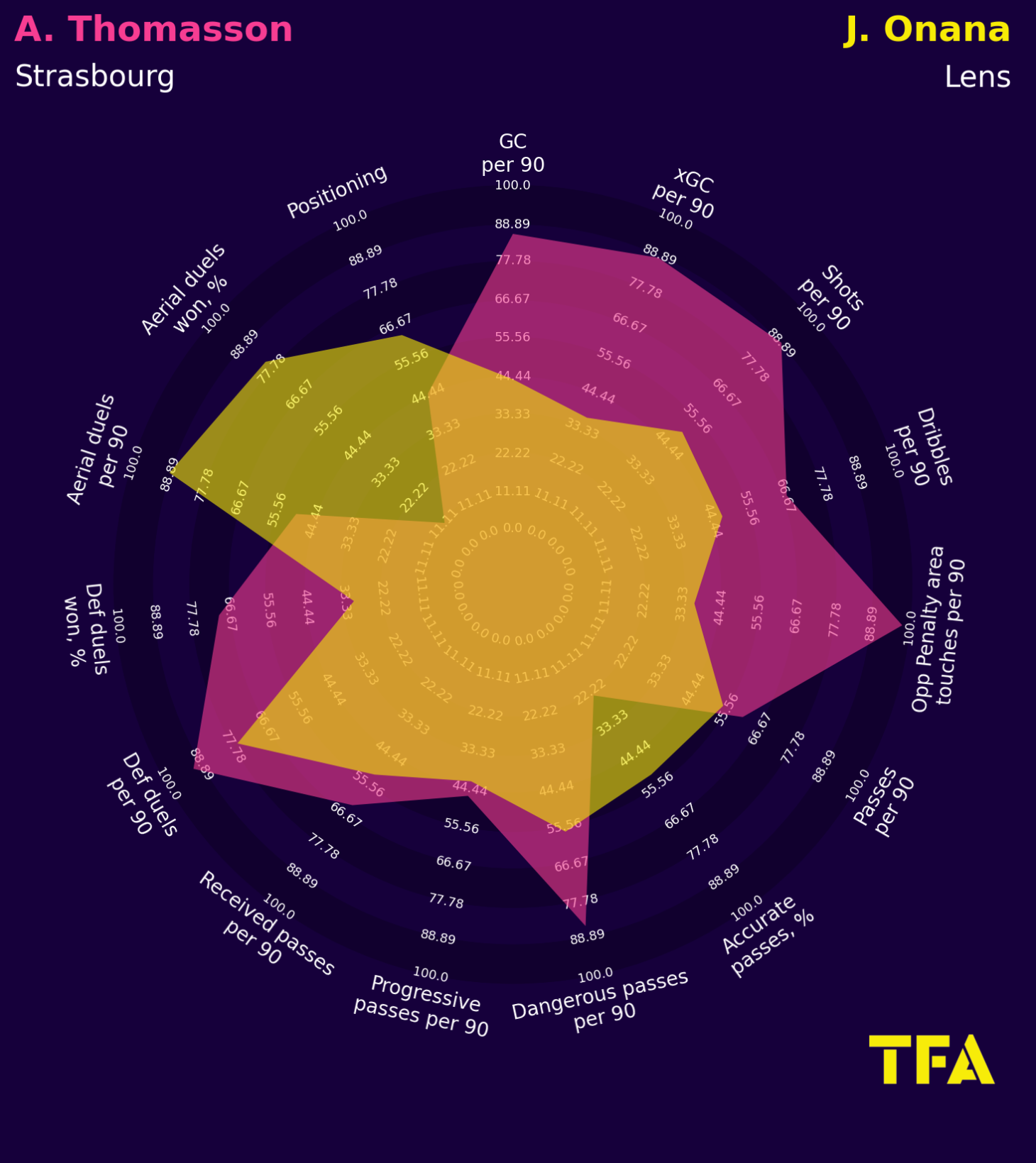 The above viz is a comparison between Thomasson and Onana for the matches played for their teams, respectively. Thomasson has done well in attack and has better numbers in terms of offensive plays and expected goal contributions. Onana, on the other hand, does not have an advantage in attacking areas. Thomasson has impressive dribbling abilities and has made more successful dribbles, as well as fares well in defensive duels. Thomasson will be an excellent replacement for Onana, who is more defensive when the team is in need of some attacking firepower.

Overall, Adrien Thomasson has been performing his duties in the middle of the park and is a diligent player who likes to act as a calming presence in the midfield. He is a player with extremely high quality and precision and has been brought in for his overall effectiveness on the pitch. He is a valuable asset for his team and provides additional defensive strength on the pitch. His role is well-defined, and he executes his game perfectly while on the field.

Transfer Analysis: What Ruslan Malinovskyi could bring to Marseille’s midfield

Under the microscope: How a move to Ligue 1 has benefited...