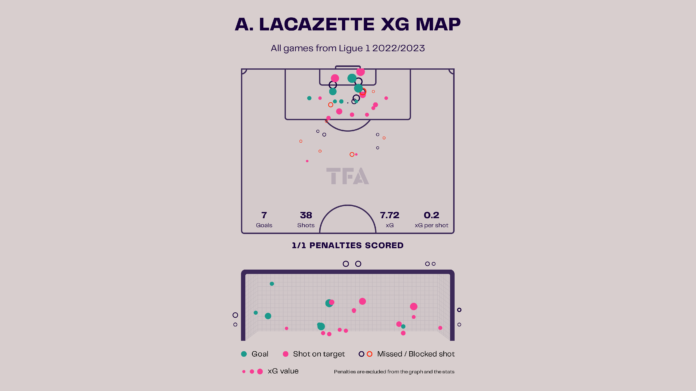 Alexandre Lacazette made his move to Lyon in the summer of 2022 for a free deal. He joined Arsenal in the 2017-18 season and went on to score 54 goals for them. There were plenty of good moments for the striker, as the 2018-19 season saw him win player of the season. The Frenchman scored only 14 goals, which was his high-scoring tally in his first season. It was very little for a striker who cost the club 46.5 million euros.

Lacazette completed his move back to Lyon. Lacezette came through Lyon’s academy. The Frenchman began training at the CentraTolaVolage, the club’s training center. While in the training process, he was gaining a lot of attention from the media and coaches, as many considered him to be the rising star of French football. He made his debut season in 2009-10.

Lacazette’s breakthrough was in the 2011-2012 Ligue 1 season, as he played 29 Ligue 1 games, notching up 2 goals. and thus receiving a regular first-team starter spot.

This season he has returned to Lyon and is happy in Lyon. He has already scored eight goals and provided three assists. It seems that he was a shadow of himself while he was at Arsenal. 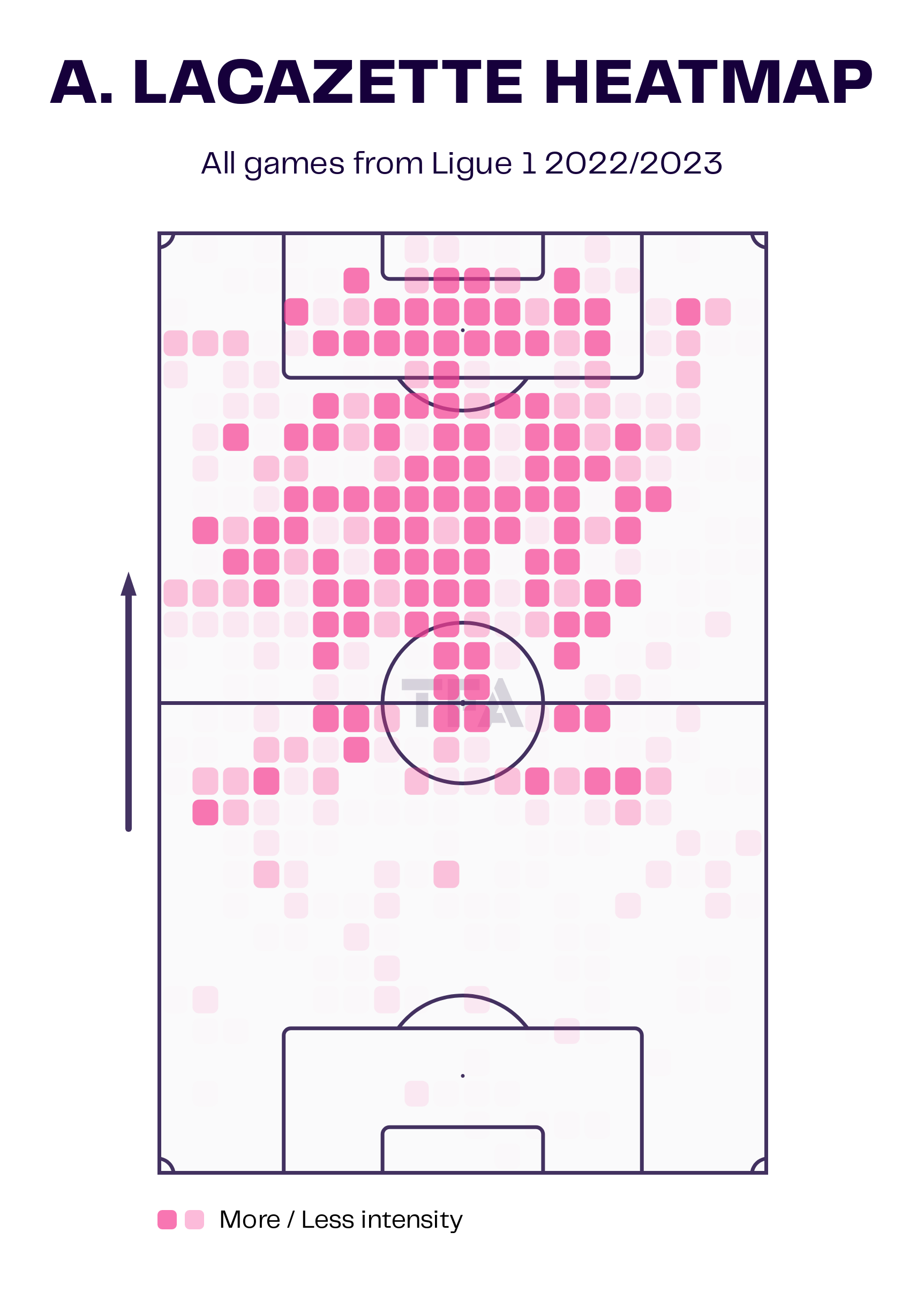 Looking at this season’s heatmap, we can see that Lacazette is an all-rounder, as he can play as a striker, he has an eye for goal, and he is a fox in a box. 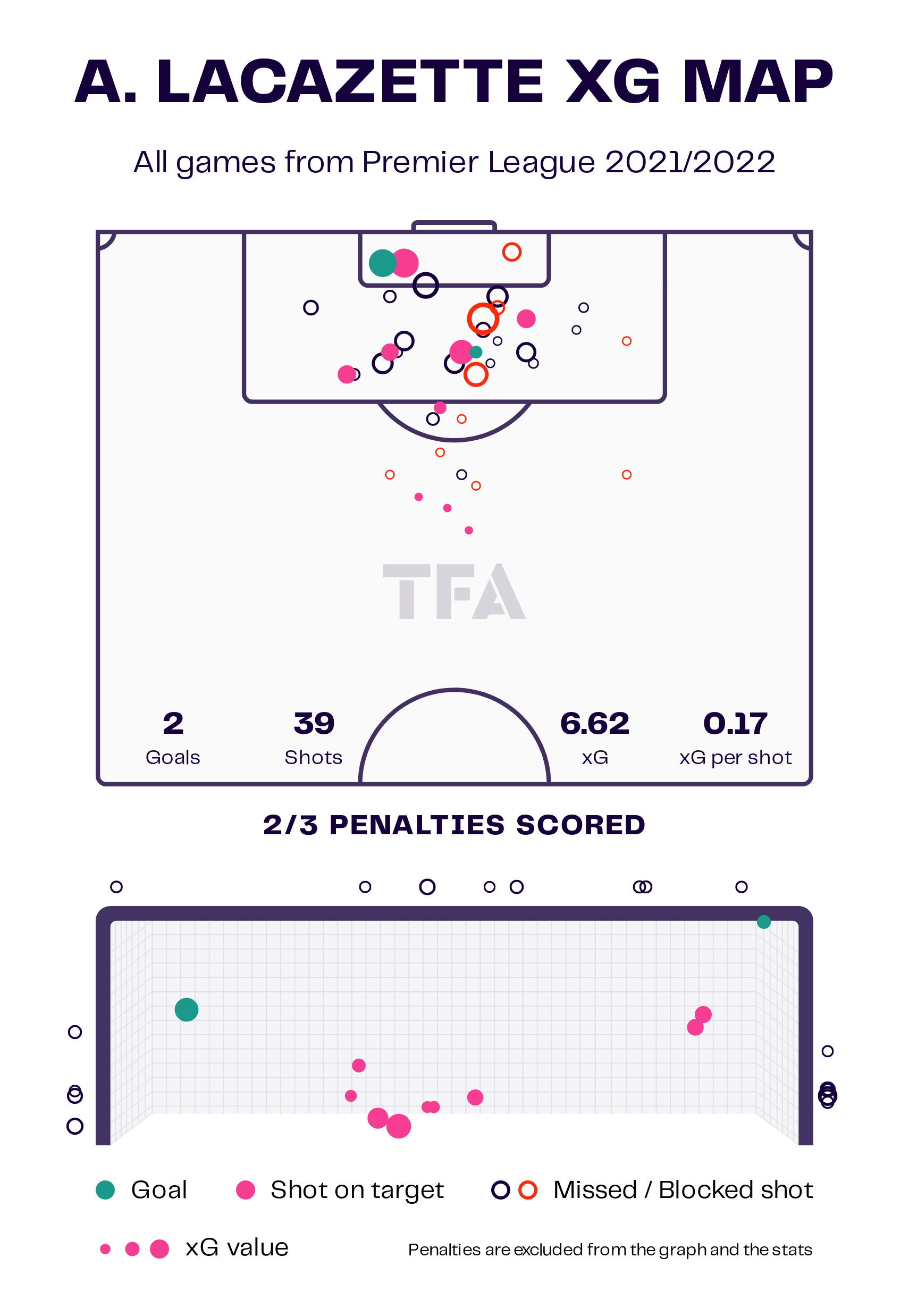 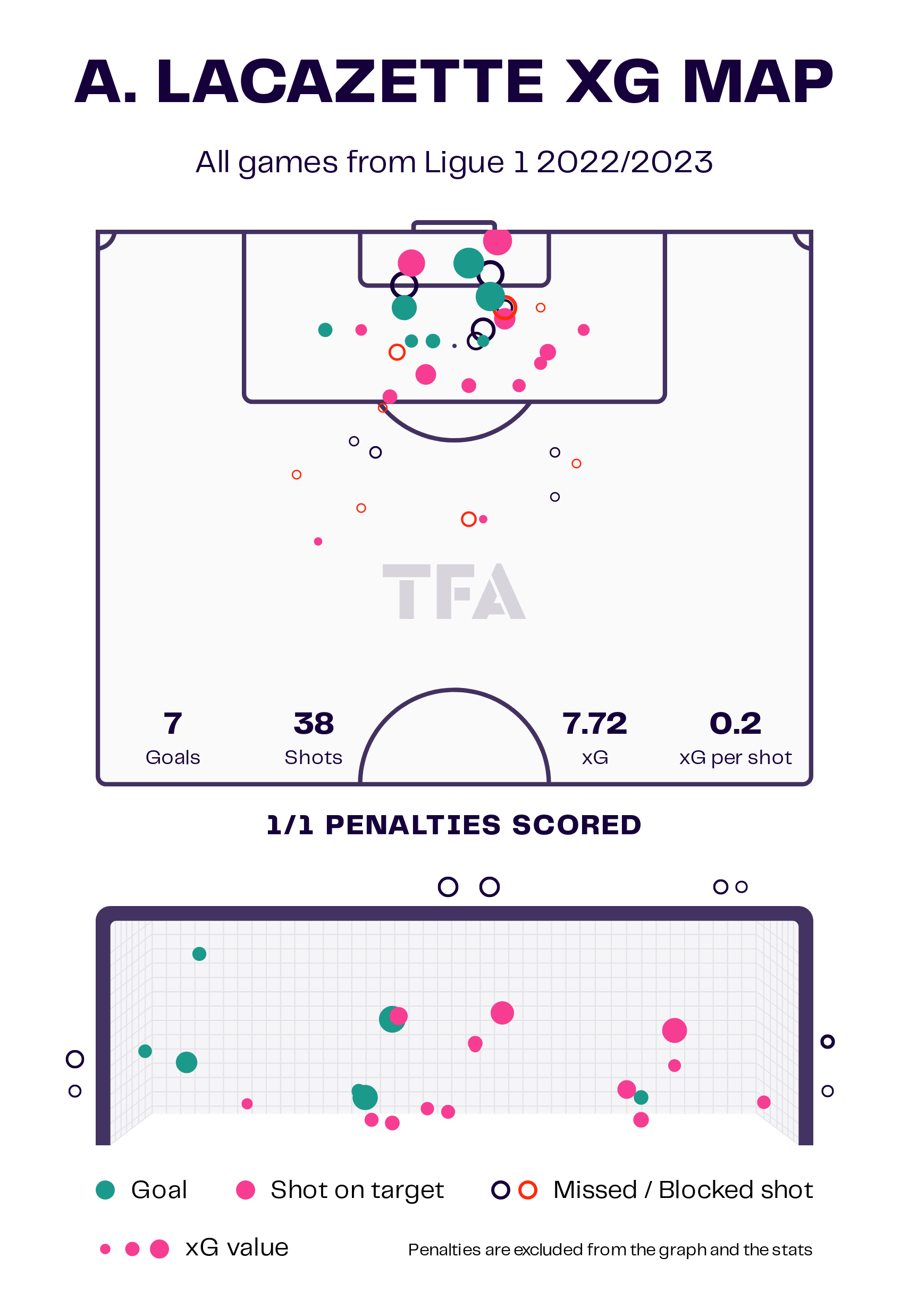 Lacazette is a poacher, or he is a fox in the box, as he converts the ball into the net with ease. It doesn’t matter whether it’s through his feet or through his head; it’s a sure shot to go inside the goal. He has converted one penalty too. In total, he has eight goals to his name. He has a shot accuracy rate of 58.5%. The Frenchman had taken 43 shots, with 20 on target. He had an xG of 6.62. His goal tally has already doubled what he scored the entire season with Arsenal. He had four goals to his name, with two out of three spot kicks taken. He had an xG of 7.72. He had a shot on target of 35.8%. He took 43 shots, with 12 on target. 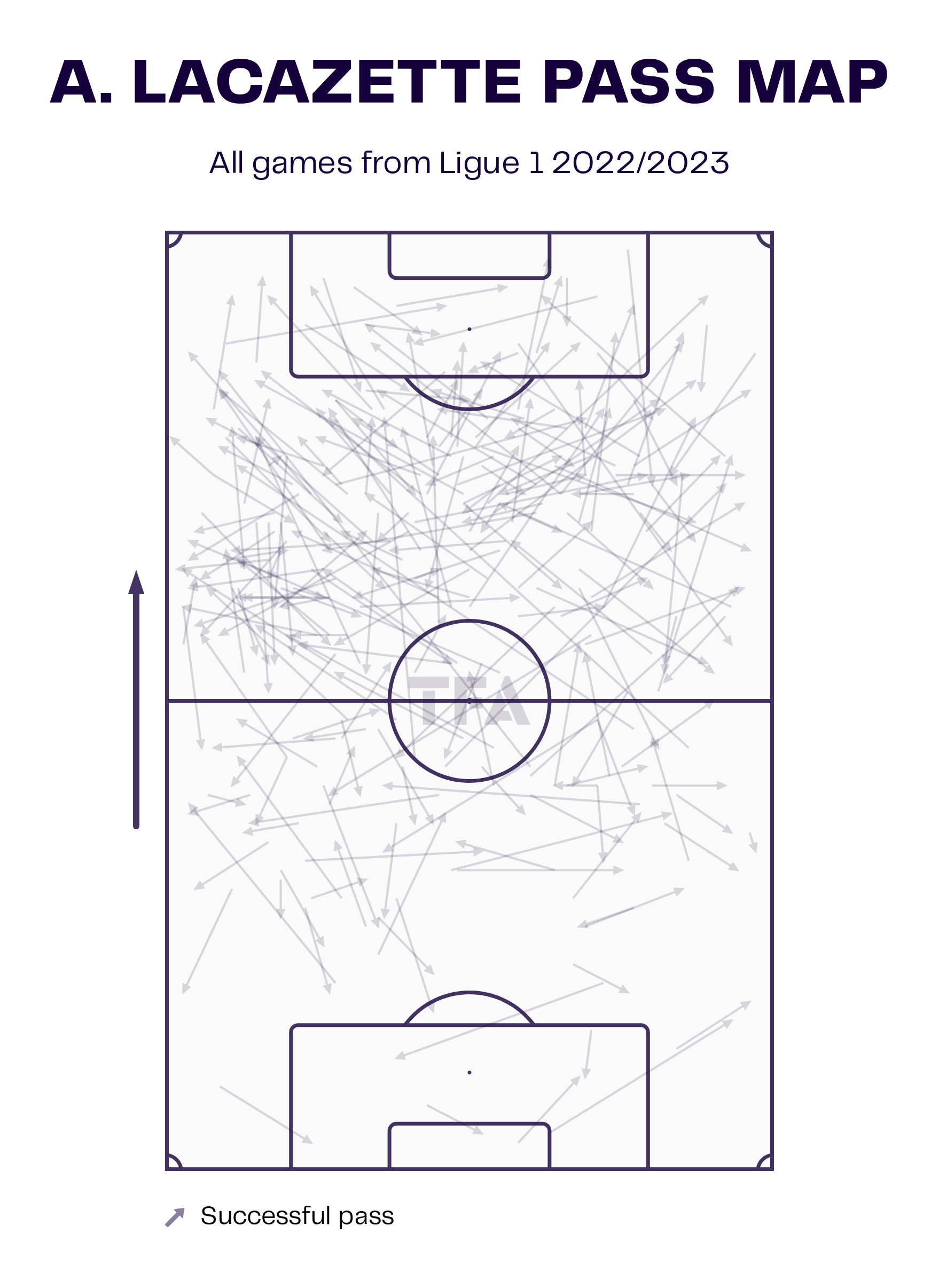 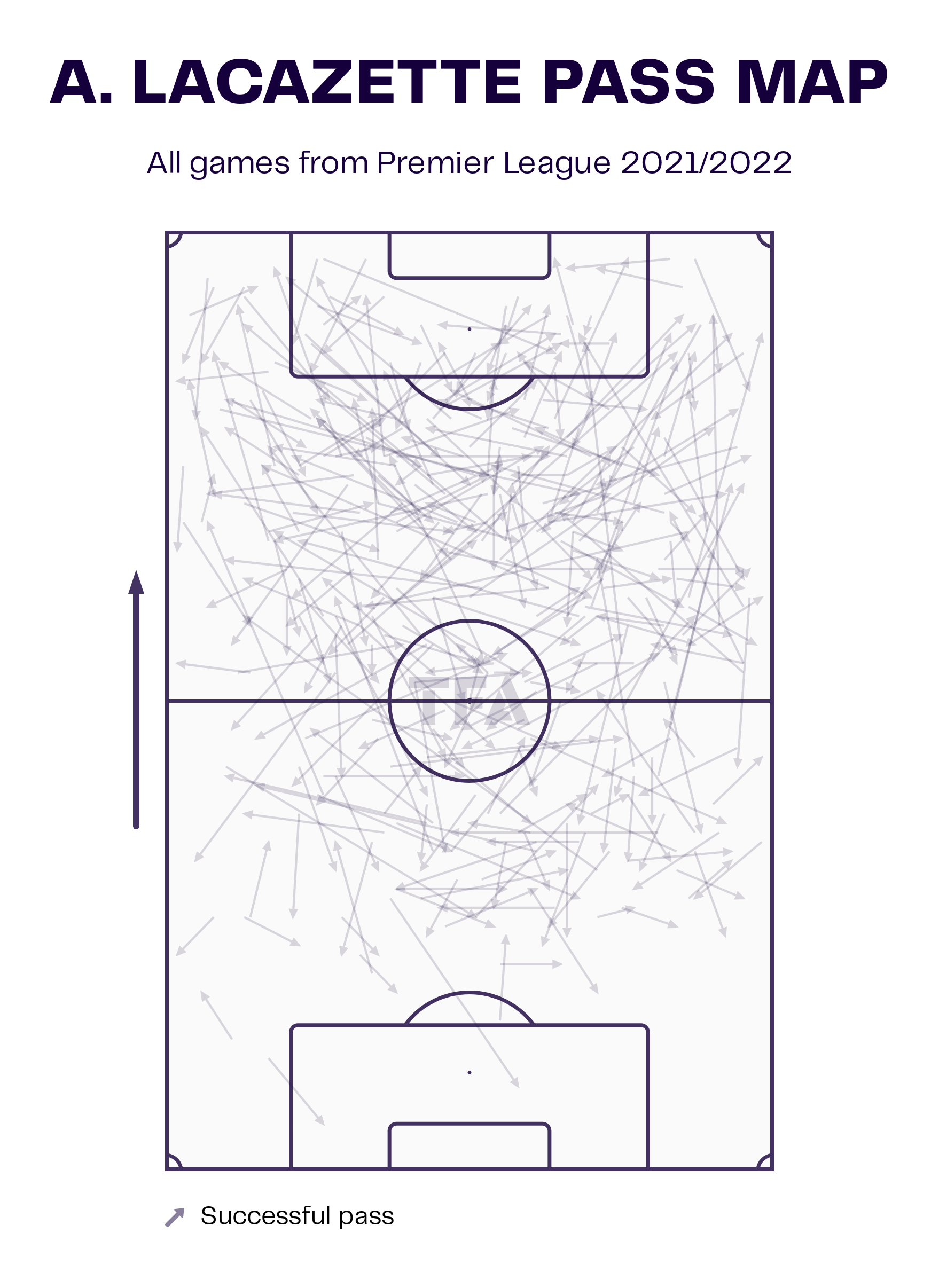 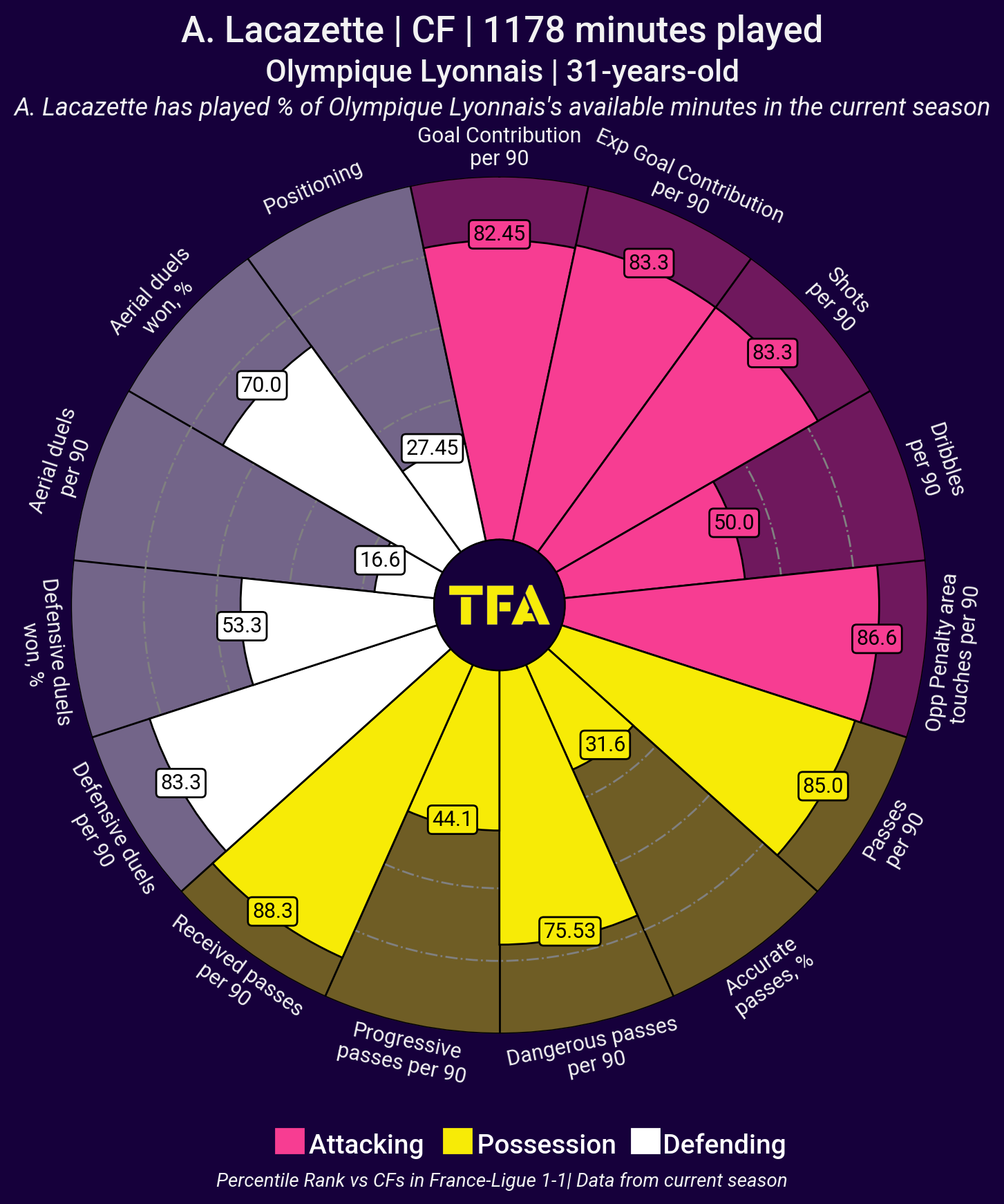 From his pizza chart, we can see the percentile rank of the player in comparison to the other centre forwards and that he has increased his goal contribution to 82.45%, courtesy of his eight goals. He likes to position himself like a poacher inside the box, wait for a pass or goal-creating chance, and then take the shot. Lacazette has 83.3 %, which is decent for a 31-year-old man. He created big three goal-scoring chances for his team. He had taken 86.6% inside the penalty box. One aspect he could improve in his attack will be his dribbling, which is only 50%.

Lacazette seems to have to find the form he once had during his younger Lyon days. The season is long, and we expect the Frenchman to score more goals and take his team to the top of the Ligue 1 table.