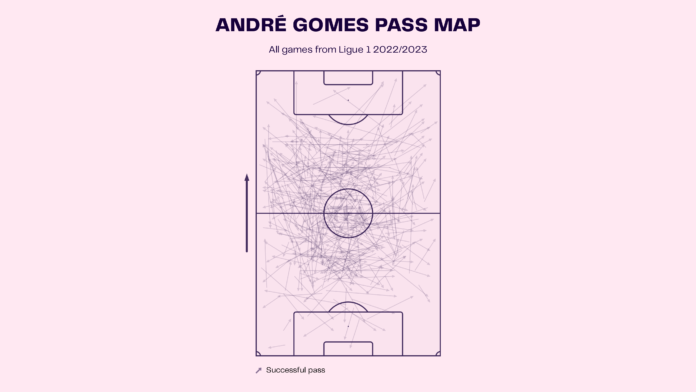 Andre Gomes is a Portuguese professional footballer who plays as a central midfielder for Ligue 1 club Lille, on loan from Premier League club Everton. Andre Gomes, along with many others, came to Everton with a lot of fanfare and seemed to indicate a new era where the Toffees could disrupt the top six. However, not all has gone according to plan, or perhaps even how the player expected things to go. The Portuguese player came with an excellent pedigree. He was a prestigious talent from the fabled Benfica Youth Academy and was then snapped up by Barcelona after spending two seasons with Valencia. However, his metronomic style could not adapt well to the English Premier League.

Gomes doesn’t fit into any of the attacking categories, with his game more predicated on dictating the tempo, maintaining possession, and keeping a possessive-based side ticking over. His move away from Everton was the only way to re-establish his football career, and he has done so in Ligue 1 while playing for Lille. He has been able to adapt well to the football in Ligue 1 given that Lille’s tactics suit Gomes’ style of play. Below we have a look at his stats in order to analyse his performances on the pitch. The above viz shows his percentile rank compared to the other midfielders in Ligue 1. Gomes’ offensive stats are excellent for a midfielder. He is ranked poorly for winning duels. The player’s ability to defend has been poor. He is ranked well for shots and dribbles. He has also maintained excellent possession stats and ranks well in passing abilities. He ranks well in terms of dangerous passes and provides a threat in the midfield due to his ability to make dangerous passes. Additionally, he completes many passes per 90 indicating the progression of the game through him in the midfield. His ability to dribble and control the ball is also excellent as he protects the ball in the middle of the pitch.

Poor form in front of the goal 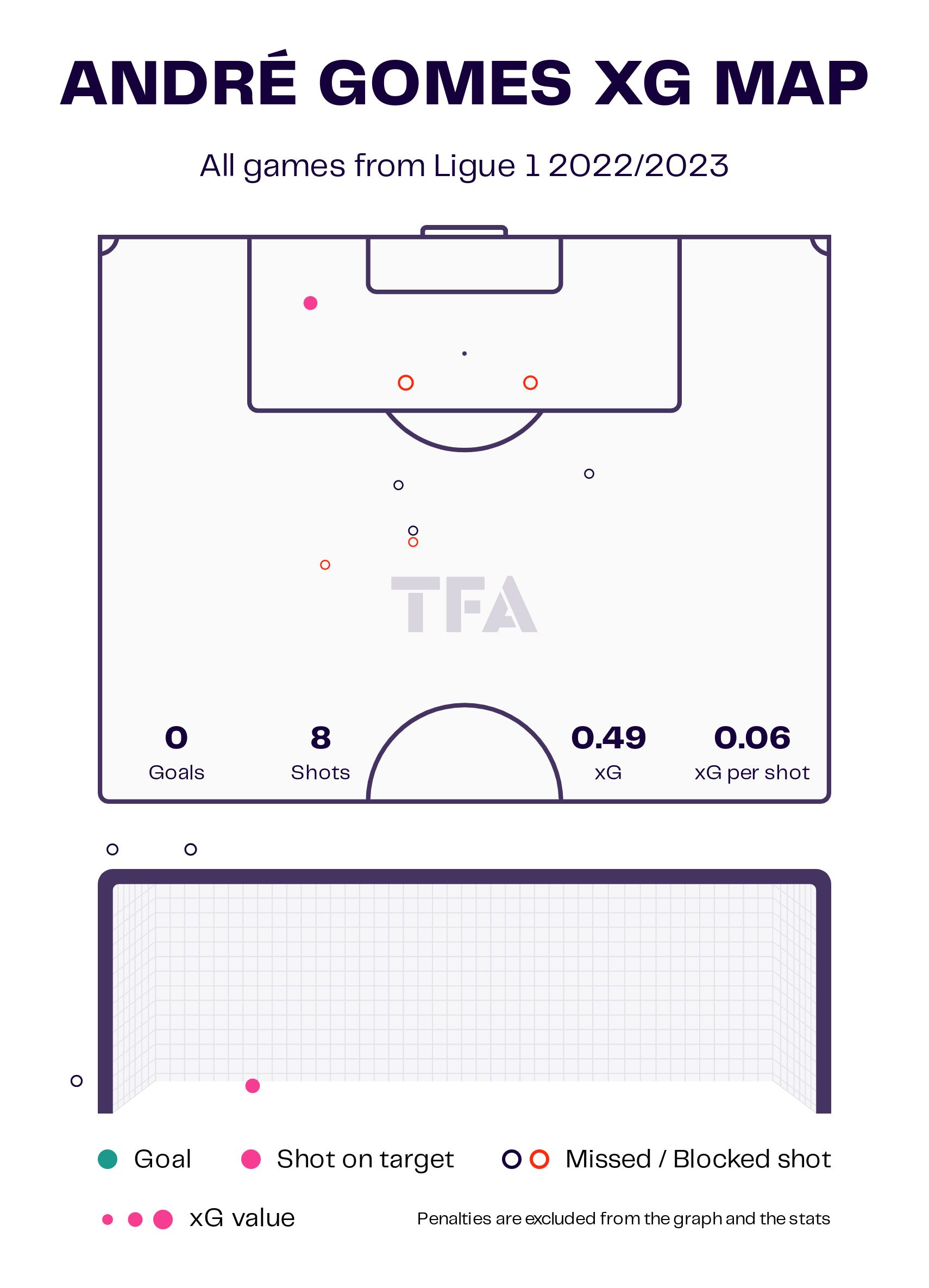 Composure in the midfield 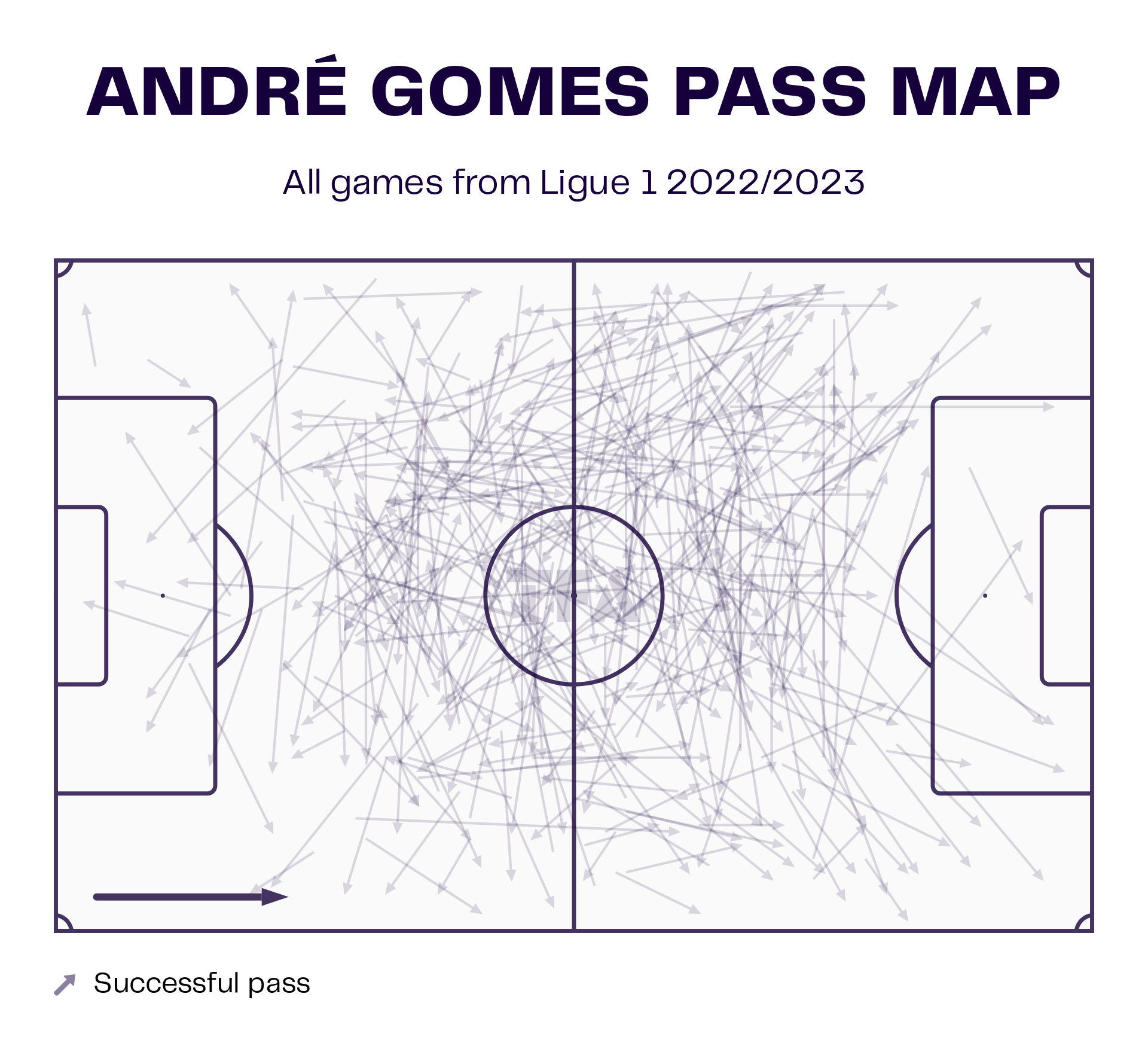 Andre usually plays in the centre of the midfield and makes movements up the pitch in order to create an attacking threat and receive the ball in dangerous areas. He makes 61.21 passes on average per 90, with a completion rate of 86.3%. It can be seen that the player makes many forward passes, averaging 19.11 per match, and makes 8.78 passes to the final third per 90 minutes. Gomes is a player who likes to provide control for his team and maintain possession. He shines in a setup where possession is the way to progress and offers good support to the team. 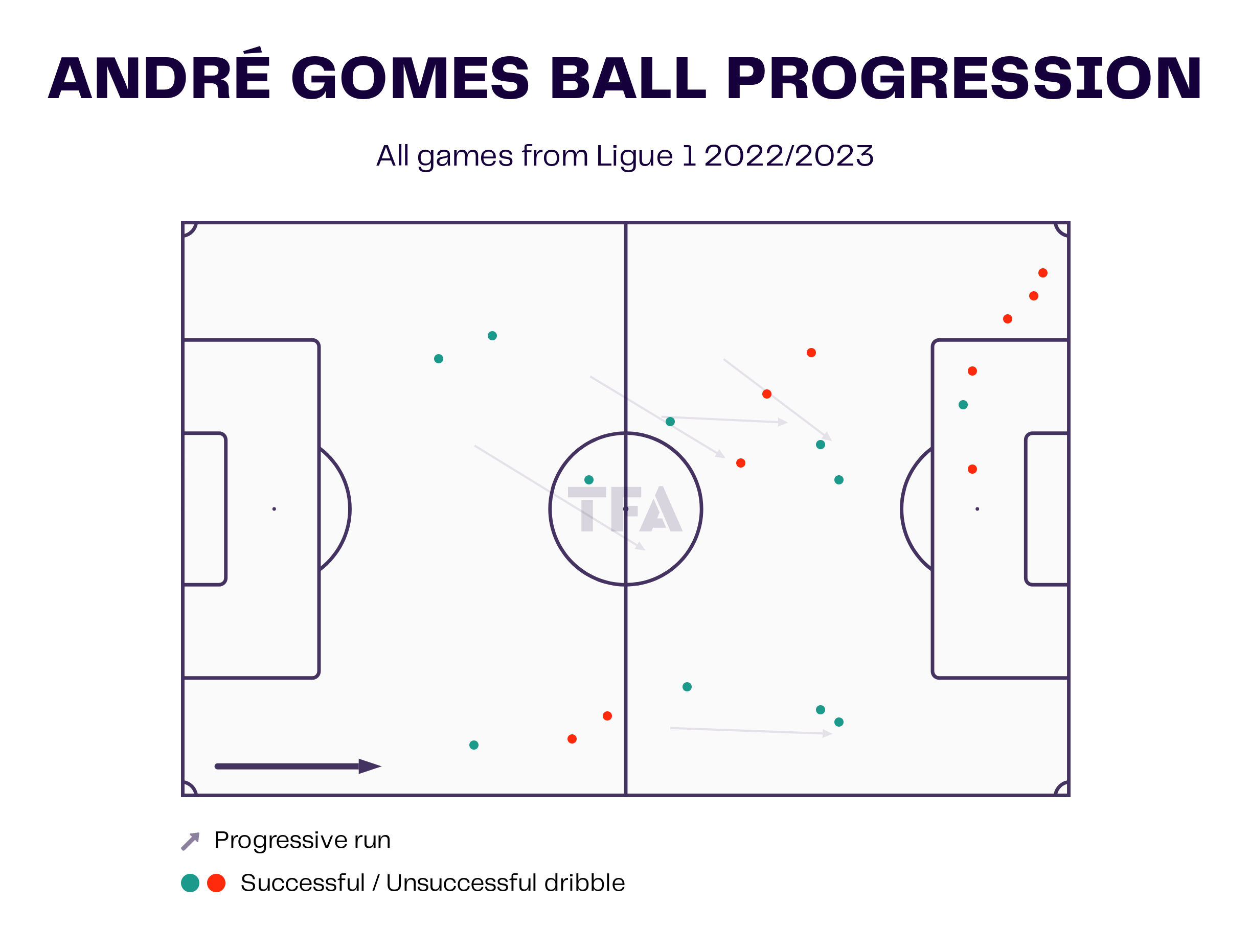 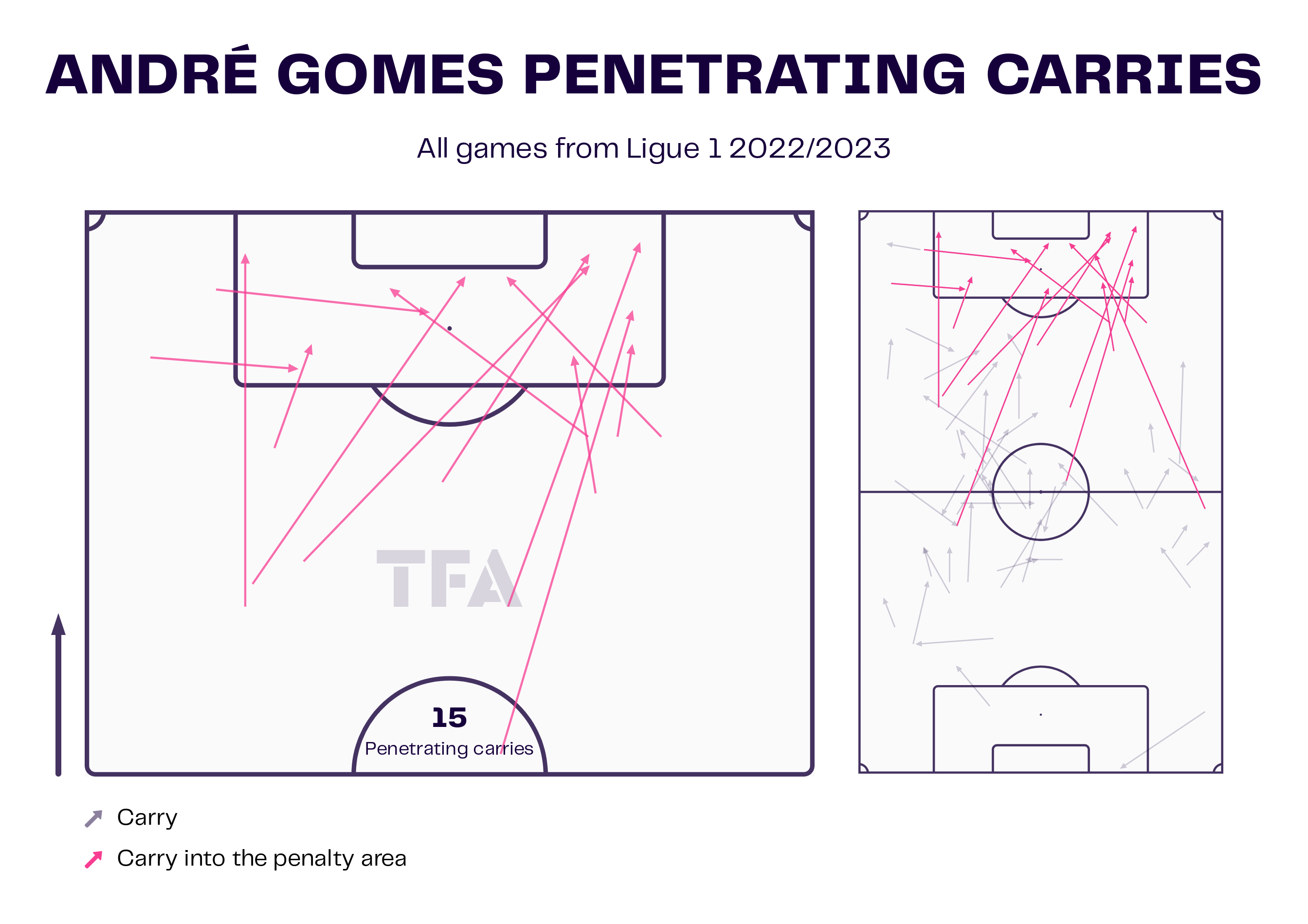 Andre Gomes likes to play possession football through the middle of the pitch. He attempts 2.71 dribbles per match, with 52.4% of them being successful. Most of his action is in the middle and final third of the pitch. His confidence and ability to keep hold of the ball are what make him worth more and are one of the reasons behind his success. The above viz depicts the player’s penetrating carries during the current season. He has made a total of 15 penetrating carries into the penalty box. The player has an average of 0.65 touches in the penalty area per 90. Additionally, he makes 0.65 progressive runs on average. 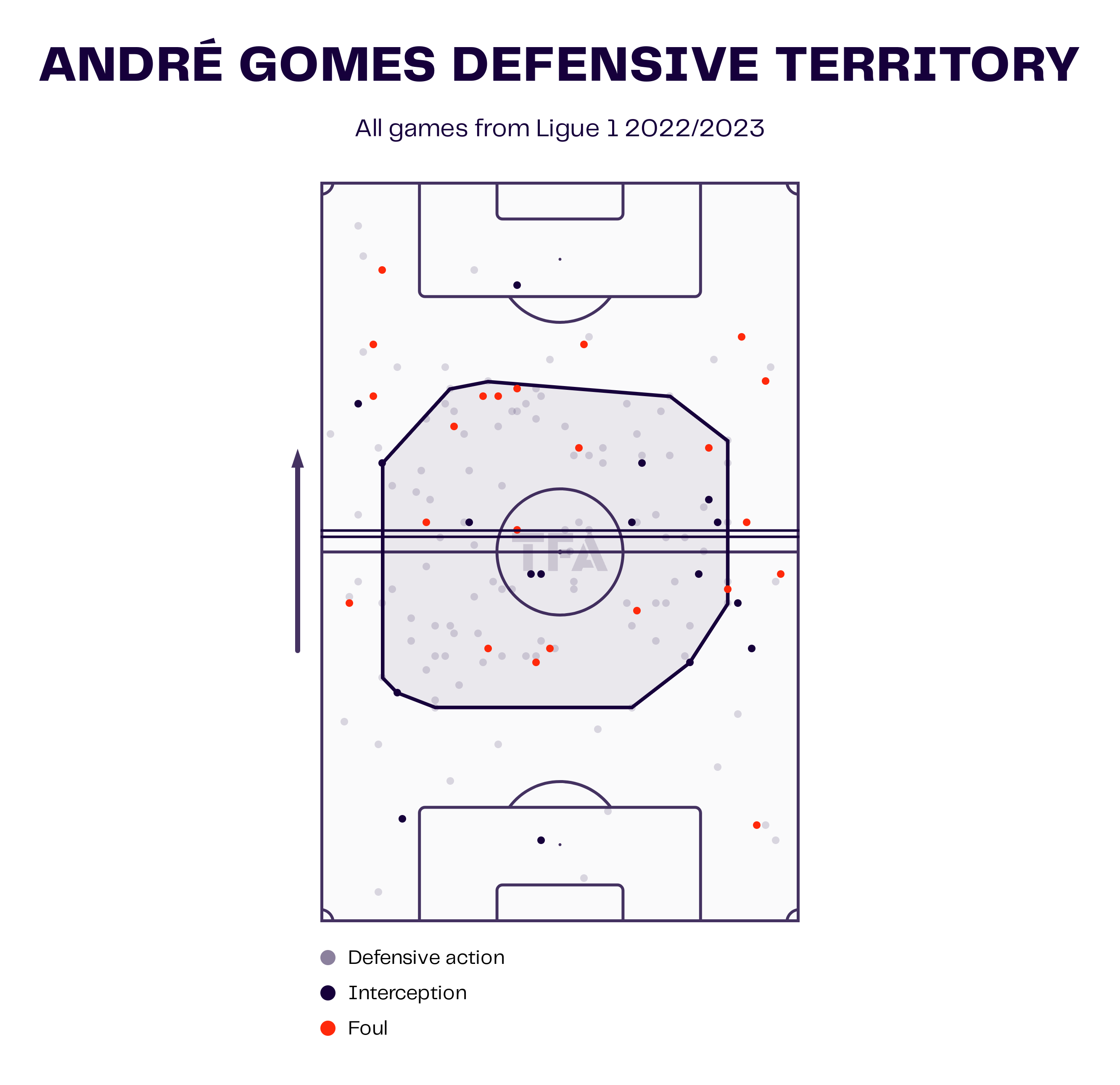 The above viz shows the defensive territory of the player for Lille in Ligue 1 2022/23. It indicates that Andre is involved in a lot of defensive actions in the defensive third and makes interceptions near the defensive and middle thirds. It can be observed that the player has given up many fouls and has averaged 2.97 fouls in the current season. Overall, he has an average of 23.11 duels per 90 and a 43% win rate. Andre Gomes averages 4.52 interceptions per 90 minutes and makes a lot of movement in the opposition’s half in order to put high pressure on the opposition’s midfield and final third. He makes 9.56 successful recoveries in the opposition’s half per 90. 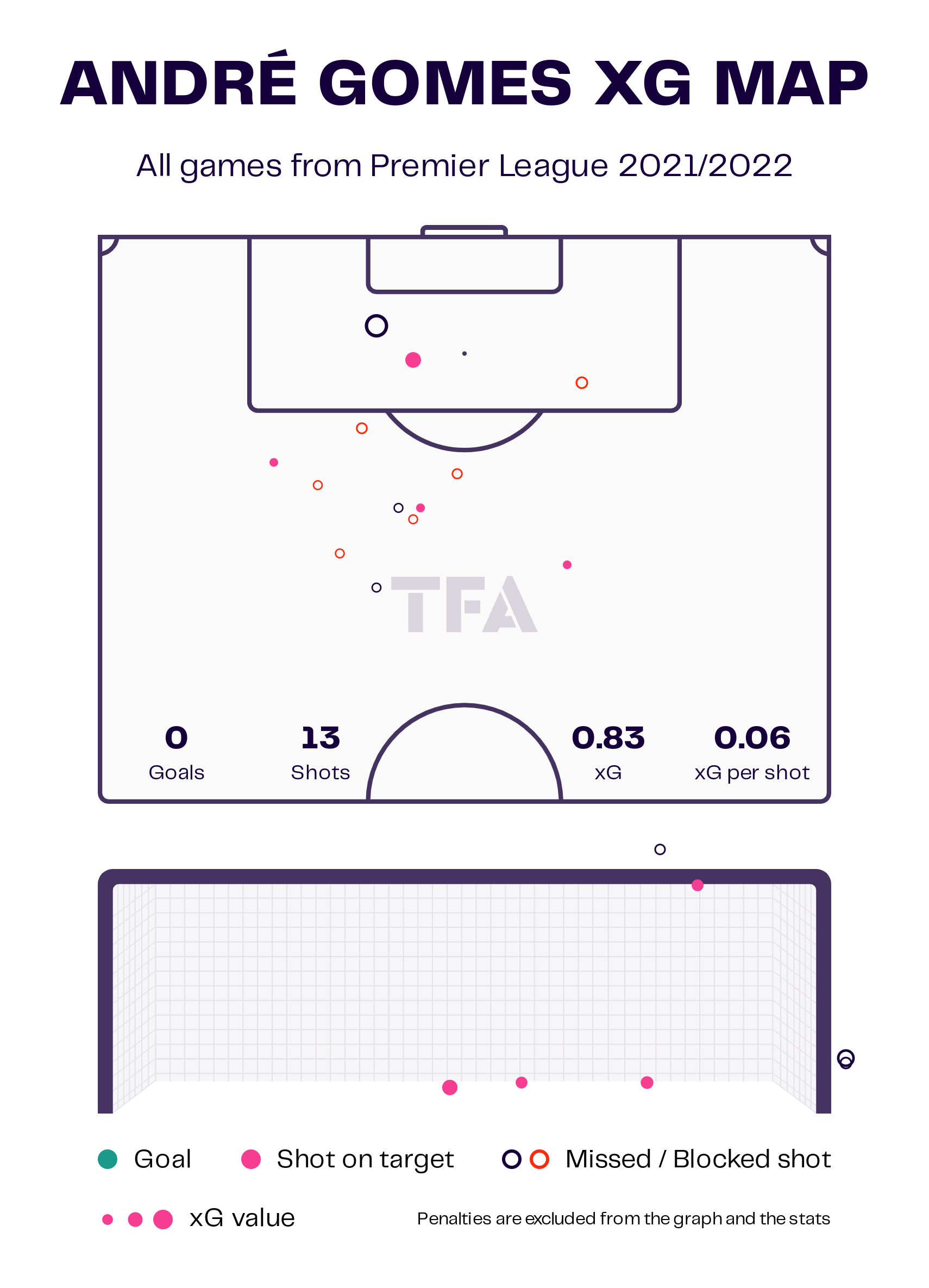 The above viz is a shot map for the player for all games in the Premier League 2021/22 season. That season, he made 14 appearances for Everton. Again, it can be seen that he lacks accuracy and conversion. He is the player who provides efficiency in attack and transitions. He has attempted 13 shots in the 14 matches (0.83 xG) and has an xG per shot of 0.06. He takes 1.67 shots per 90 and has an accuracy of 30.8%. As a matter of fact, Gomes has scored only one goal in four seasons for Everton in the Premier League, having played a total of 88 matches.

Overall, Andre Gomes has provided strength in the midfield for whichever team he has represented. He provides stability and control in the midfield and helps the team progress up the pitch. His awareness of positioning and making dangerous passes is key to his success on the pitch. Lille will be satisfied with his services so far, and the player will look to help the team secure European qualification by the end of the season.

Rennes vs PSG Preview: xG per 90, recoveries and key players

Under the microscope: How the former World Cup winner has settled...