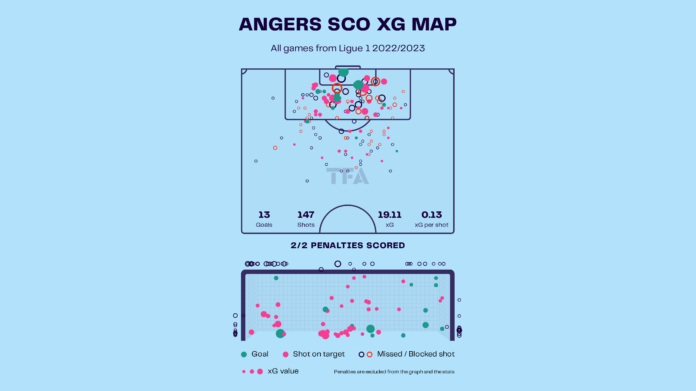 This season in Ligue 1, Angers’ form is very poor overall, with two wins, two draws, and 11 losses. This performance currently places Angers SCO at 20th out of 20 teams in the Ligue 1 table, winning only 13% of matches. Angers SCO’s home form is not up to par with the results being one win, one draw, and six losses. And their away form is considered poor as a result of one win, one draw, and five losses. Angers has scored a total of 15 goals this season in Ligue 1. Angers has conceded a total of 34 goals this season in Ligue 1. It will be a difficult second half of Ligue 1 for the club and based on their current situation, they may be fighting to stay in the top tier till the last matchday. Below are some stats looking at their current season in Ligue 1. 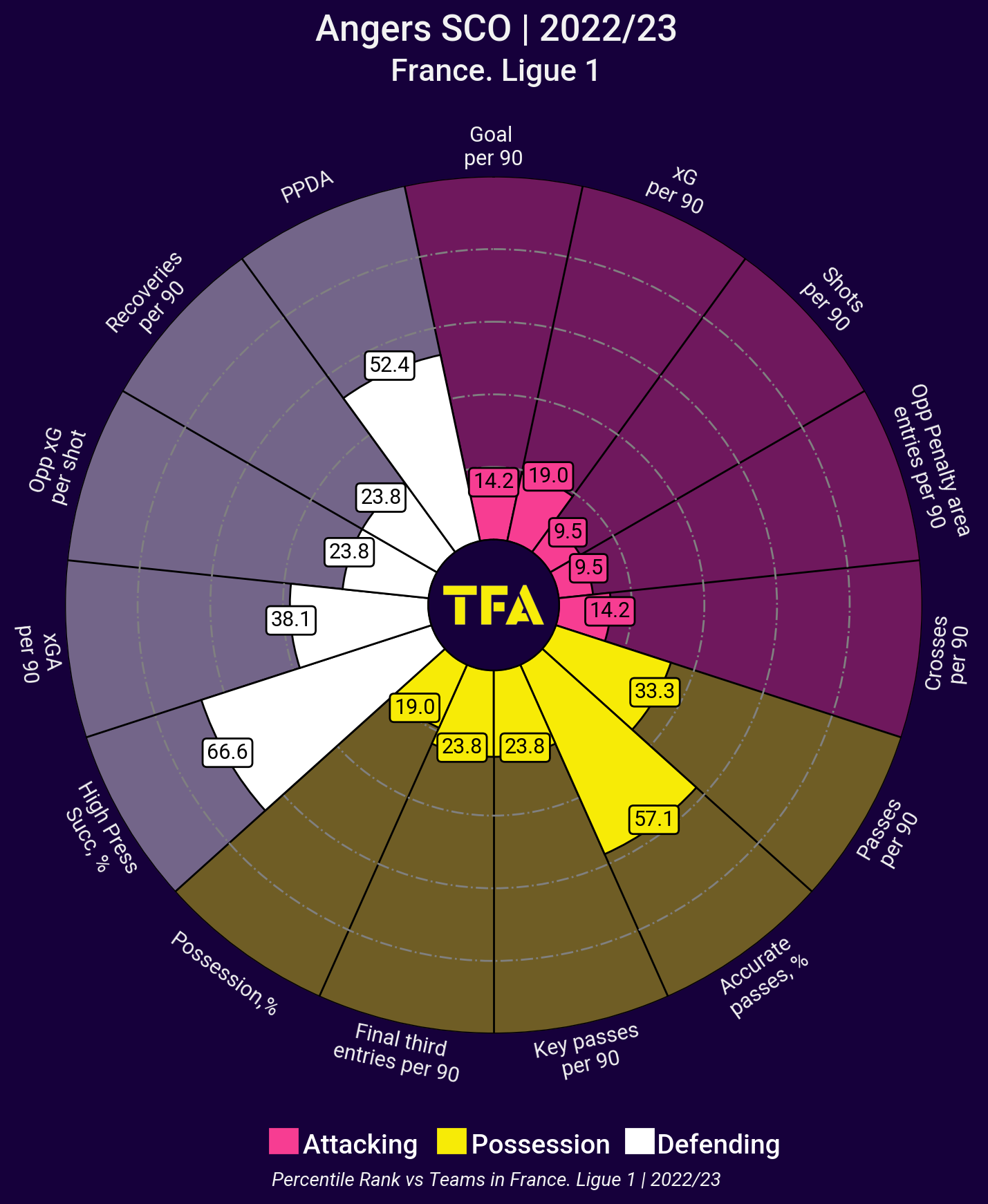 The above viz shows the percentile rank of the team in comparison to other teams in Ligue 1. It can be observed that Angers are the lowest-ranked team in the division. They are struggling in attack with barely anything to show for it. In terms of defence, Angers are somewhat successful in putting high pressure on opponents. In the possession department, they are again struggling to maintain possession and only have accurate passes to count as compared to other teams. 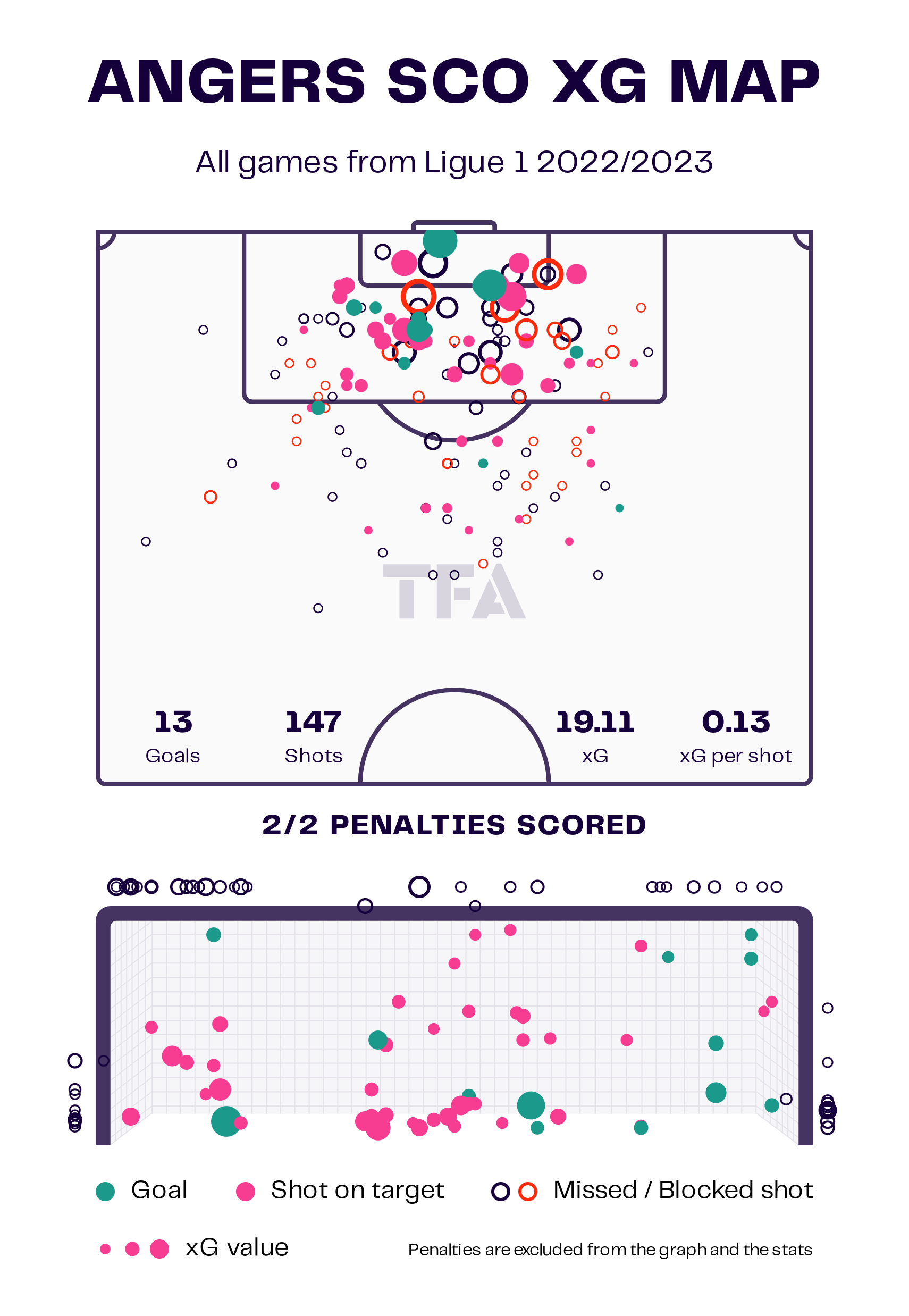 Angers are currently in 20th place in the 2022–23 French Ligue 1, with eight points from 15 matches played. They have won two matches, drawn two, and lost 11. They have scored 15 goals (18.6 expected goals (xG)) and conceded 34 goals (25.4 expected goals against (xGA)). In the above viz., it can be seen that they have made many attempts at goal from the six-yard box. They also have shots on target from well outside the box. On average, they attempt 10.19 shots with 36% accuracy. 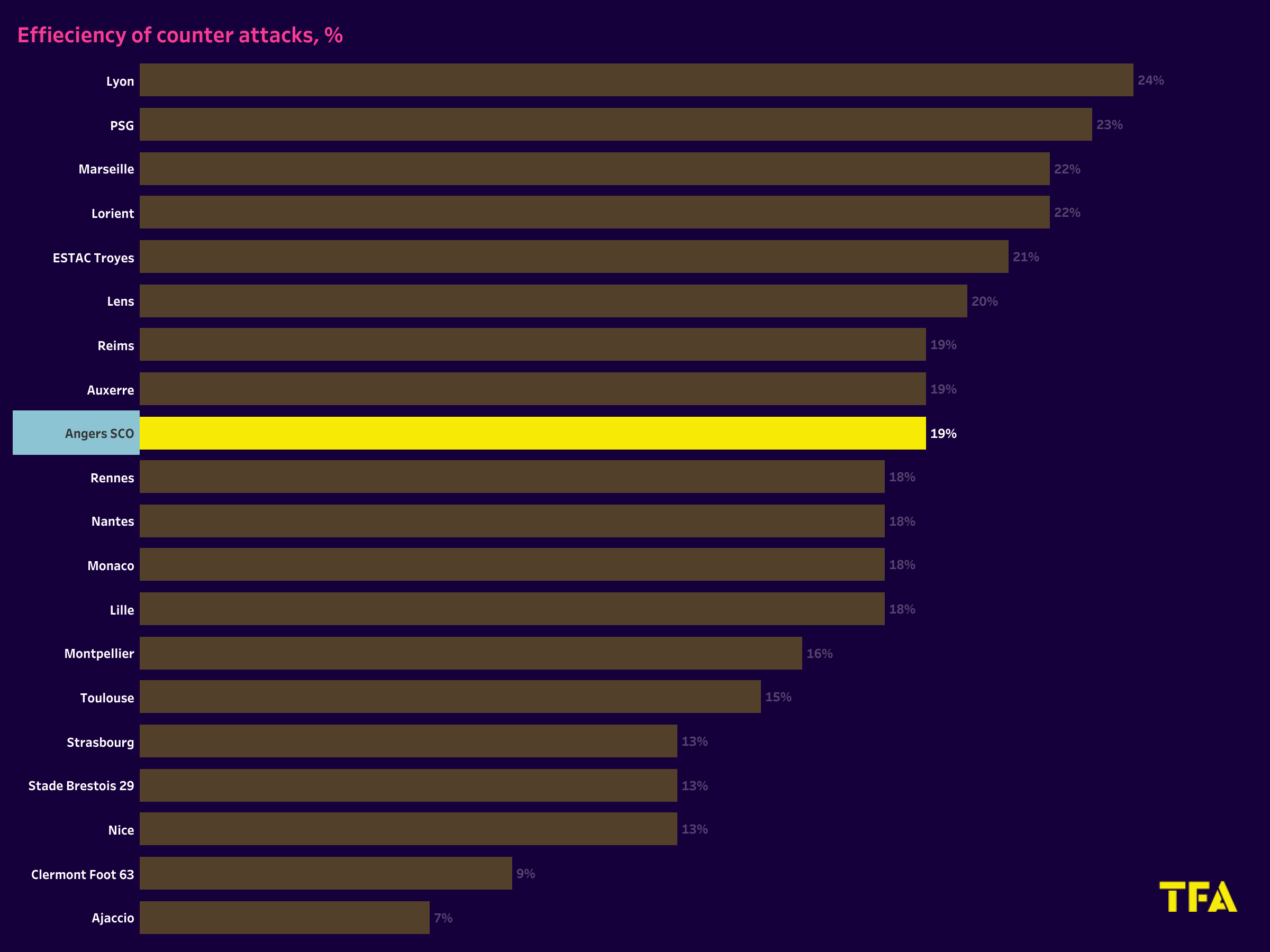 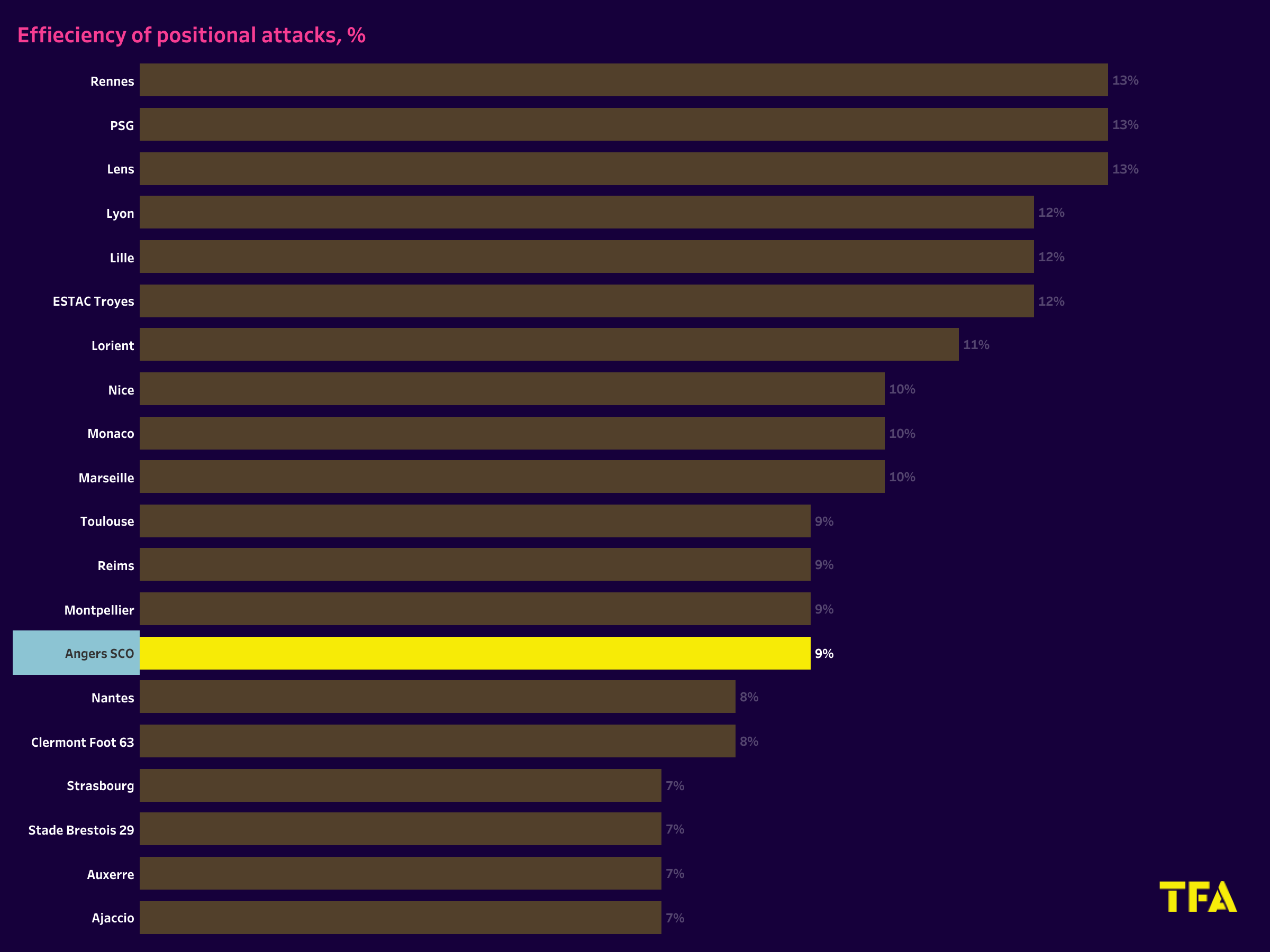 Angers attacking efficiency has been somewhat lacking this season. They have 19% efficiency in terms of counterattacks and 9% efficiency in terms of positional attacks. They average only 1.53 goal-creating actions per 90 and have an 80% pass completion rate per 90, with 371.3 passes on average per 90. Additionally, they have 9.8 successful dribbles per 90 minutes as a unit. Angers makes 13 crosses out of every 90. All these numbers are very low compared to all the other teams playing in Ligue 1 this season. On average, they make 26.69 positional attacks with shots taken in 21.3% of them and 1.81 counterattacks with shots taken in 44.8% of them. 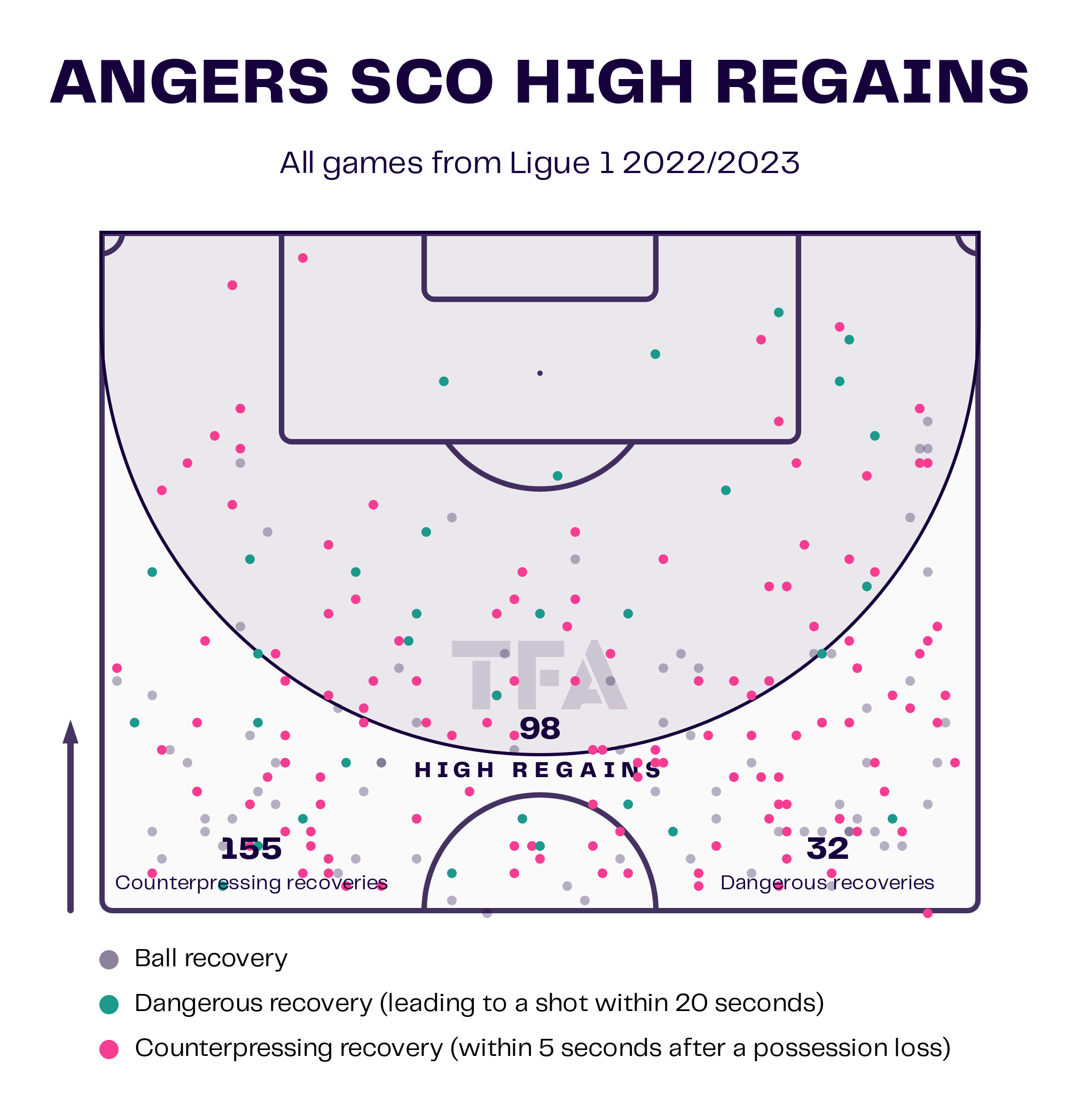 The above viz is a representation of the high regains made by the team in the current season. Angers have made a total of 155 counter-pressing recoveries within five seconds of losing the ball. They have also made a total of 98 high regains in the final third of the pitch. In addition to that, they have made 32 dangerous recoveries leading to a shot within 20 seconds of getting the ball. Angers are at the 66.6 percentile for high press success rate in the league, which is decent. They average 1.67 tackles per 90 in the attacking third, 7.60 in the middle, and 8.80 in their defensive third. In addition, they average 53.06 recoveries per 90. 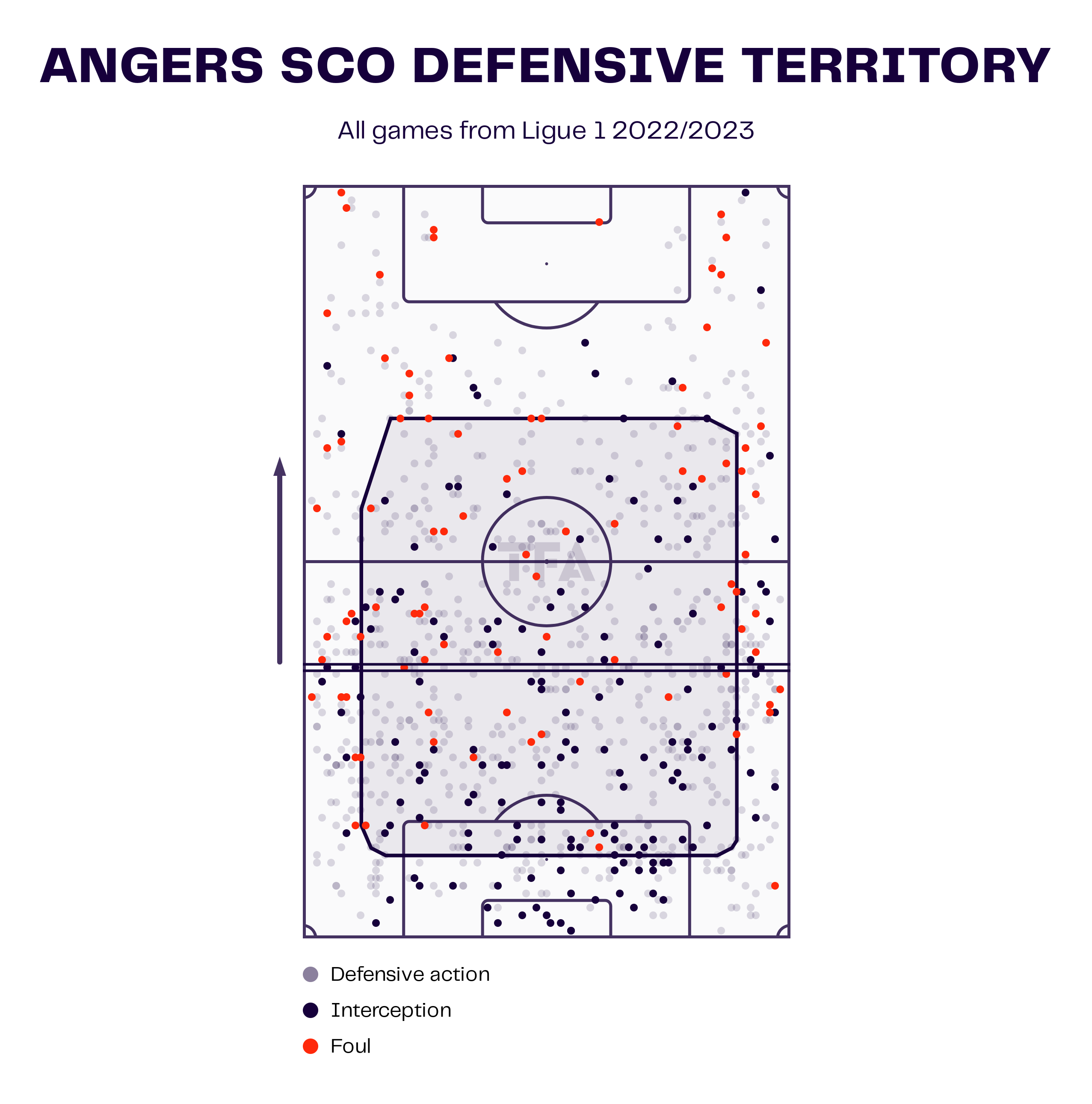 Angers defence has been a disaster this season, having conceded 34 goals already this season. The above viz shows the defensive territory of the team. It indicates that Angers were involved in a lot of defensive actions in the defensive third. They make only 26.9 interceptions per 90 and 10.3 blocks per 90. Angers wins 50% of the aerial duels contested per 90. They make 1.63 tackles per 90 in the final third and average 47.49% possession in the current season. They have made three fouls inside the box and average 12.31 fouls.

Hunou from the mid 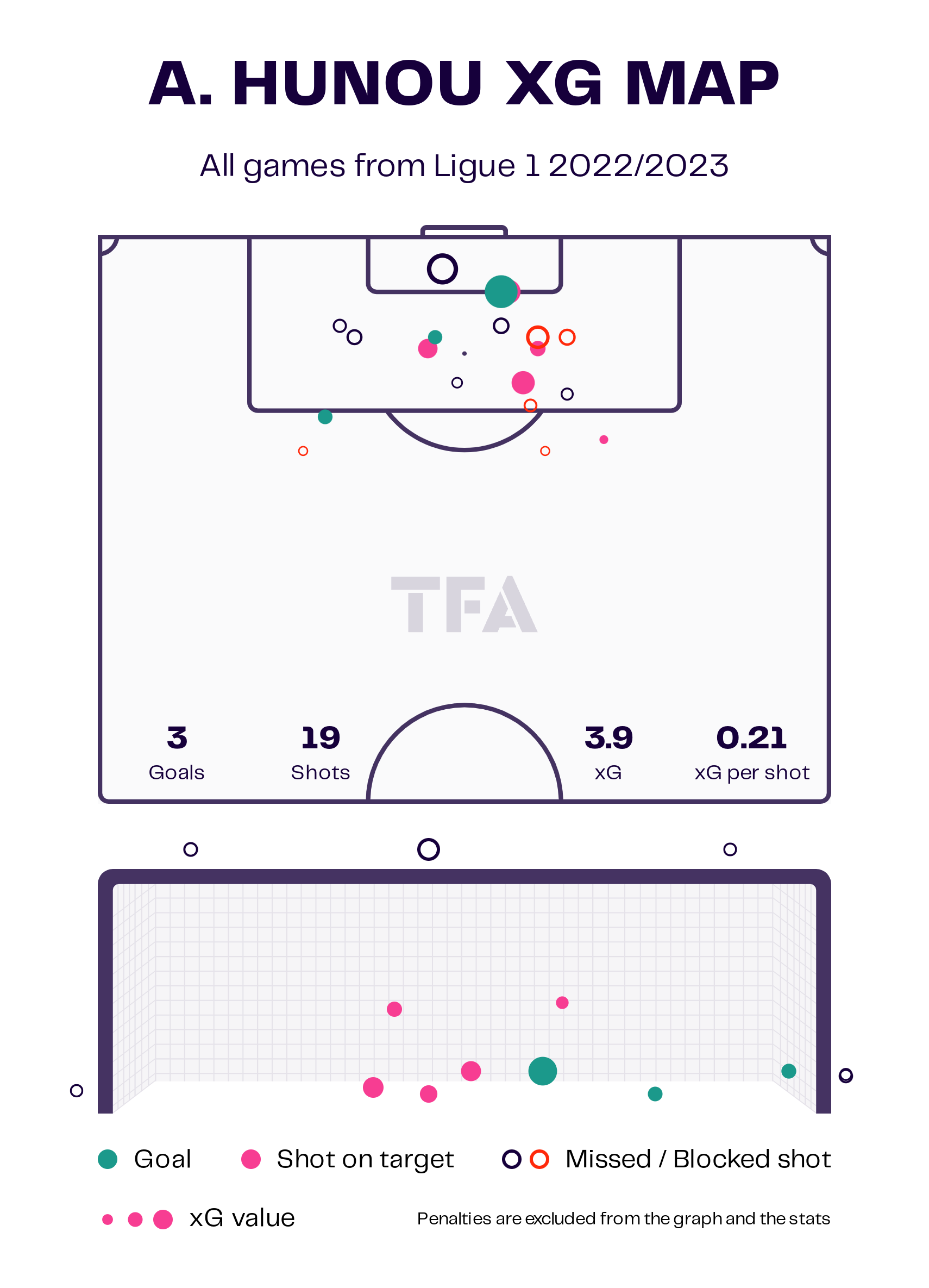 It will be a difficult season for the club going forward. The last match for Angers was against Ajaccio in the French Ligue 1, and the match result was a 1-0 Angers away loss. Last season was a similar situation for the club, where they struggled similarly in attack and defence. They finished 14th last season and had a negative goal difference, but managed to avoid relegation by just nine points. Angers will play their next fixture on January 1, 2023, against Lorient at Stade Raymond-Kopa in the French Ligue 1. They will be hoping to start racking up the points in order to continue their legacy in the top division for seasons to come.

Under the microscope: How Alexandre Lacazette’s return to Ligue 1 has...