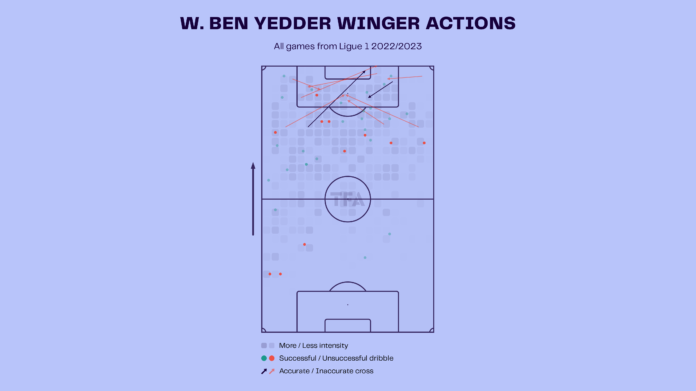 Wissam Ben Yedder is a French professional footballer who plays as a striker for Ligue 1 club Monaco and the France national team. Having enjoyed a career-best campaign with 20 league goals in 2020/21, Ben Yedder went five better the following year. With 32 goals across all competitions, the 32-year-old was hitting his peak and was France’s best-performing domestic central striker. Ben Yedder scored 25 league goals in 2021–22, runner-up to Mbappe’s 28 goals. This included a hat-trick in the penultimate game, a 4–2 comeback home win over Brest. Monaco attacker Wissam Ben Yedder has played in most of the team’s Ligue 1 matches in 2022–2023, making 15 appearances overall. Recently, Monaco rescued a late draw through Wissam Ben Yedder after a quickfire double from Lorient looked to have secured the victory for Régis Le Bris’ side. Below are some stats for the player in Ligue 1. 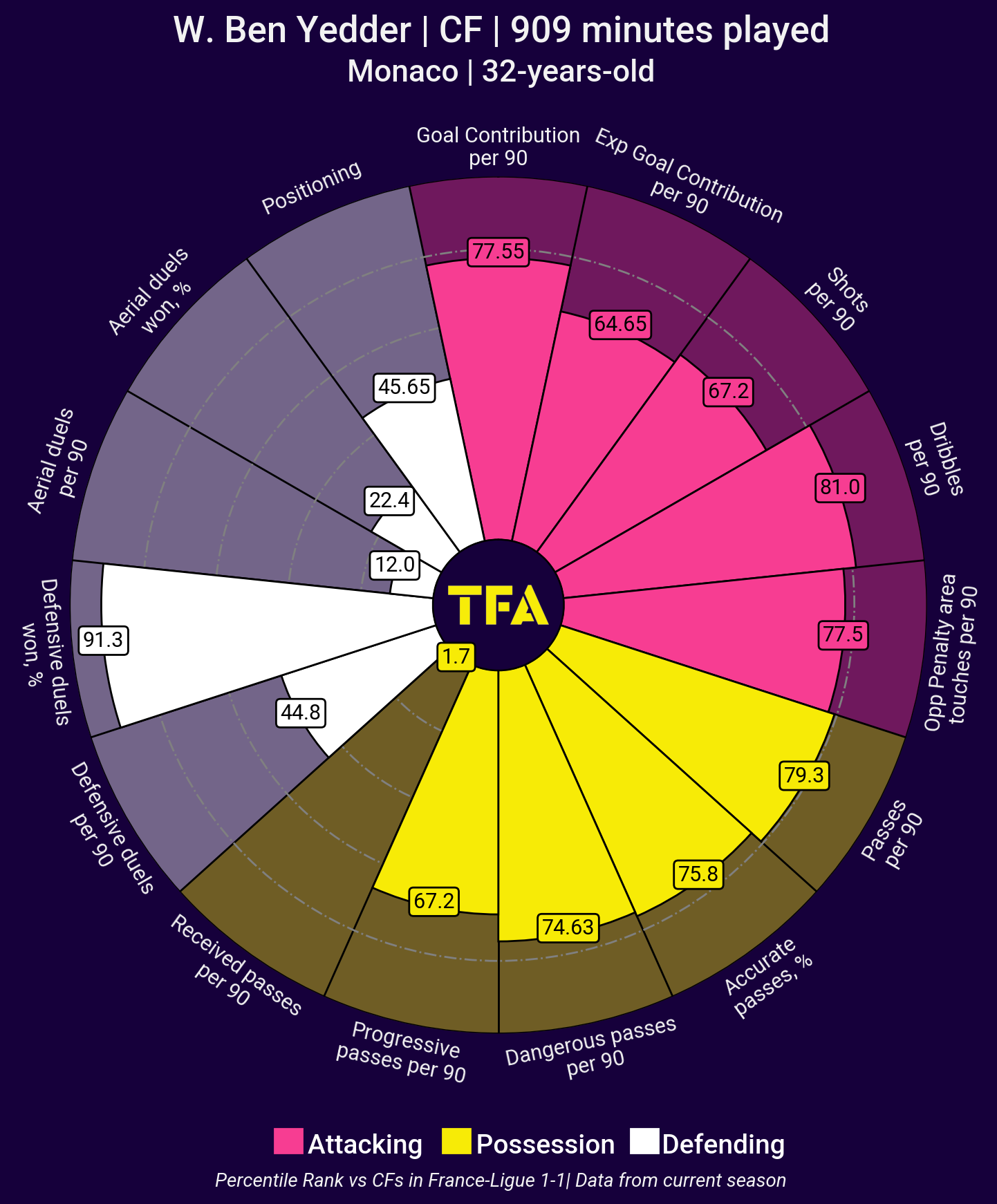 The above viz shows the percentile rank of Ben Yedder in comparison to other centre-forwards in Ligue 1. Since his early days, Ben Yedder has been a big threat in front of goal owing to his lethal quality. Similarly, in Ligue 1 this season, he has been a threat and ranks among the top for goal contributions, averaging 0.77 goals in the league. Overall, he ranks highly in expected goals per 90, dribbles, and touches in the opposition’s penalty area per 90, which has come in handy for the Monaco team. Ben gets 4.59 touches in the opposition’s penalty area per 90 minutes. 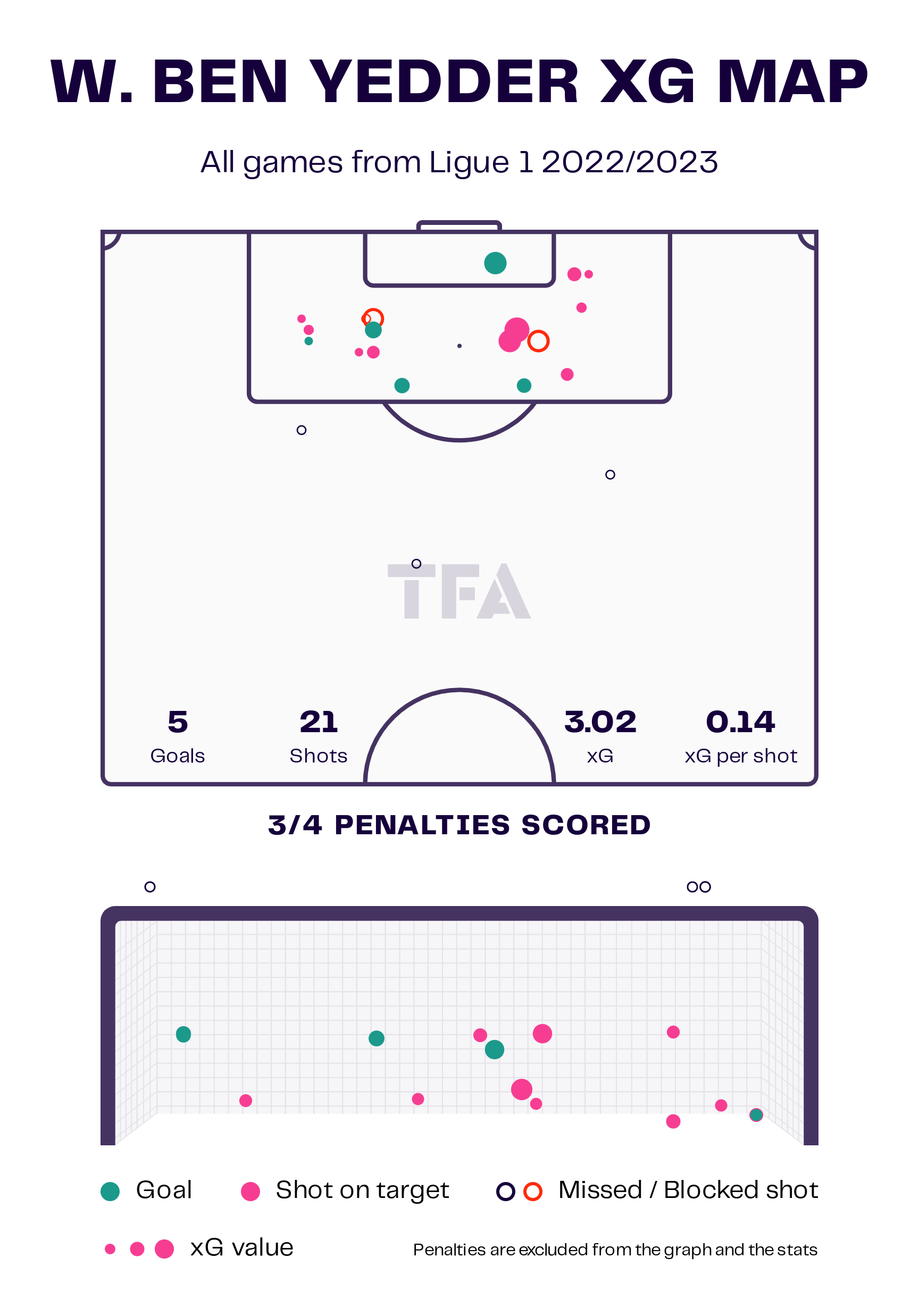 Ben Yedder last featured in the competition on January 11 for Monaco versus Lorient. He scored a goal for his club in that 2-2 draw. He has scored seven Ligue 1 goals in 2022–2023, making him the side’s second-top league scorer, and registered two assists. Ben has 18 shots on target from a total of 22 and has scored eight goals (5.95 xG). Ben averages 18 passes per game and has an 80% pass completion rate. All of his goals have come from inside and around the six-yard box. He averages 2.39 shots per 90 minutes with 76% accuracy.

Yedder among the top last season 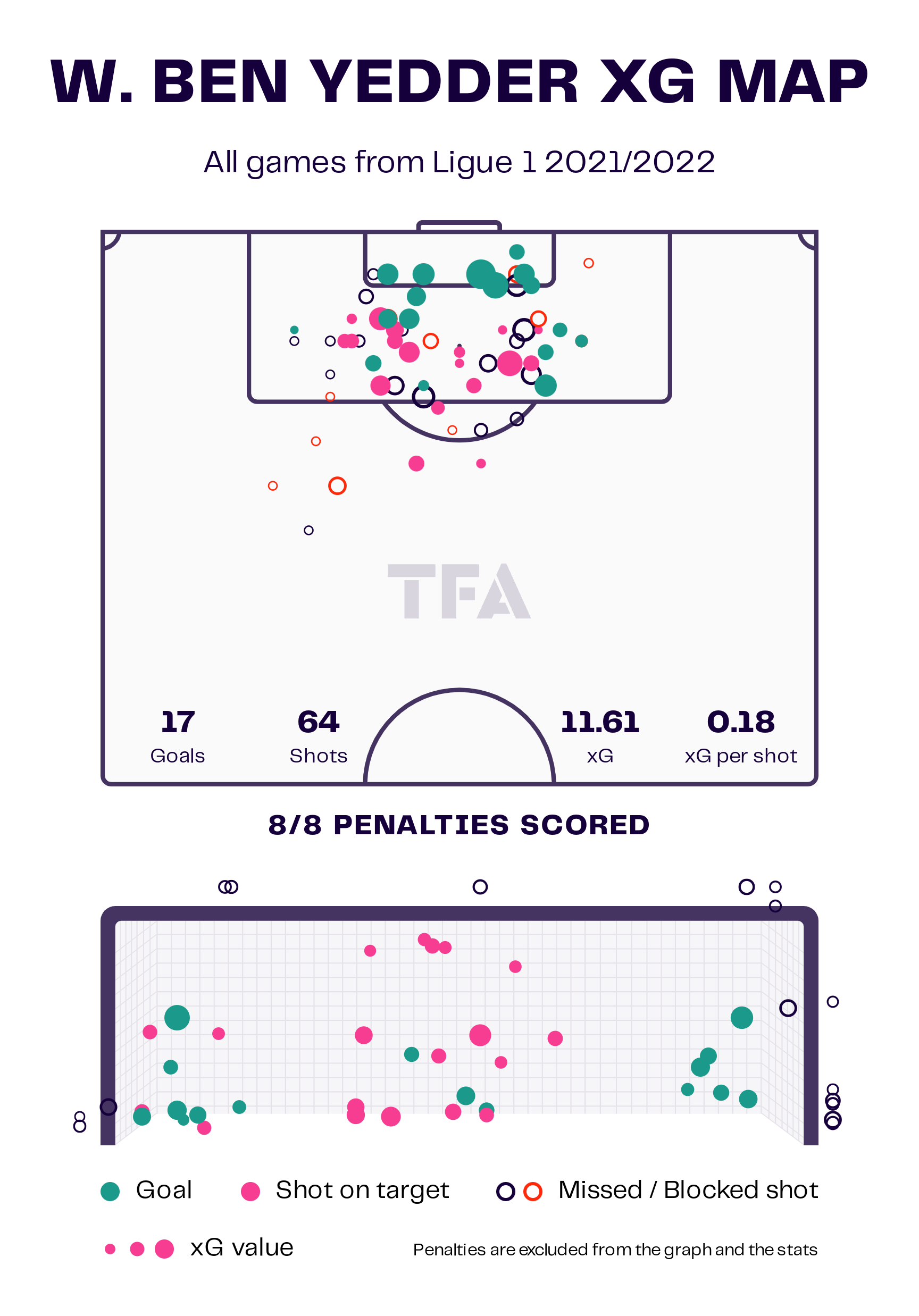 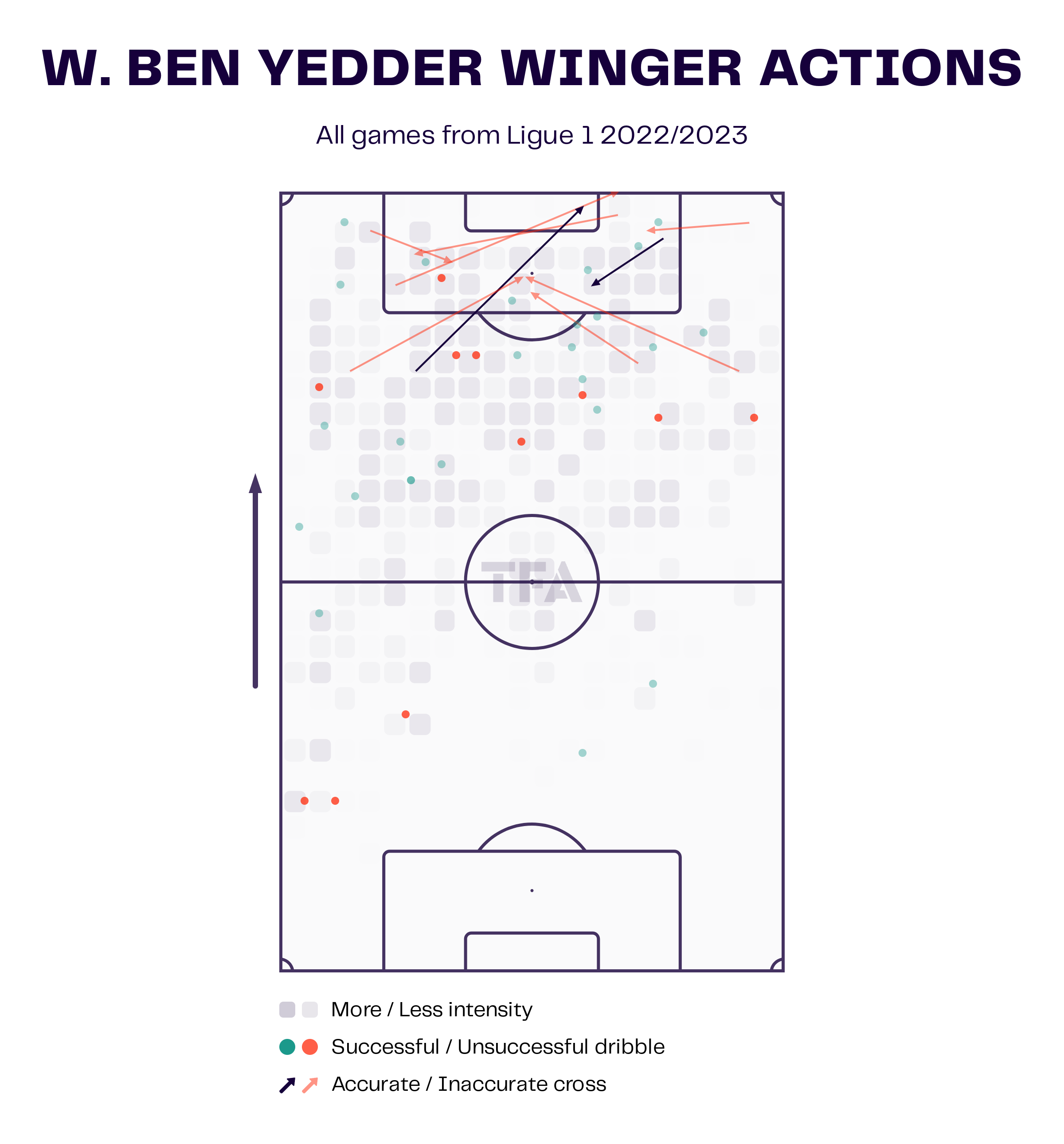 The above viz depicts Ben Yedder’s winger actions in the current Ligue 1 season. He attempts to dribble inside the final third. There are many attempts to cut inside from the flanks on the right wing and in the penalty box. Additionally, he makes 1.43 progressive runs on average and completes 3.44 successful dribbles per 90. Ben also makes 5.74 forward passes with a 70% rate of accuracy. 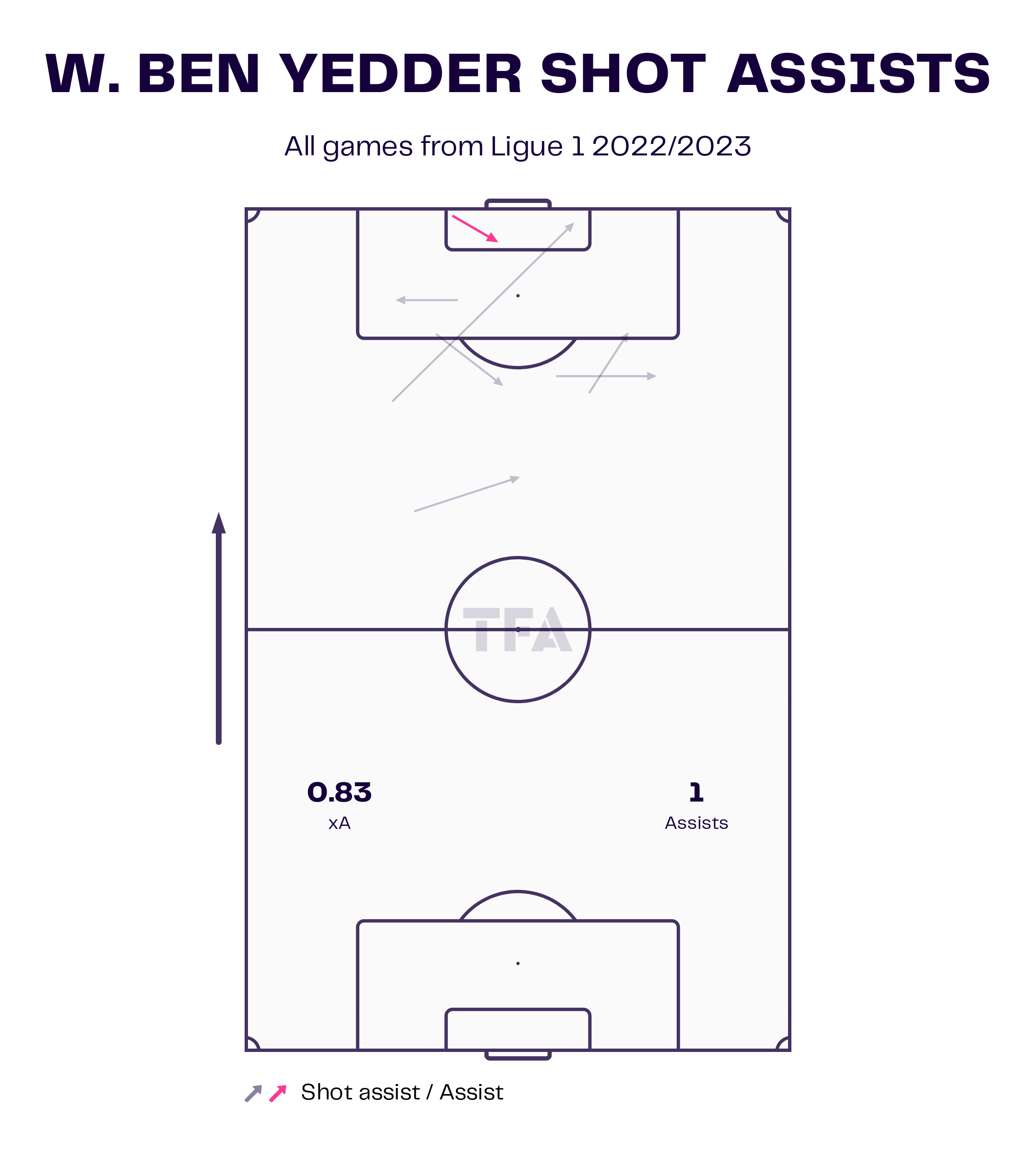 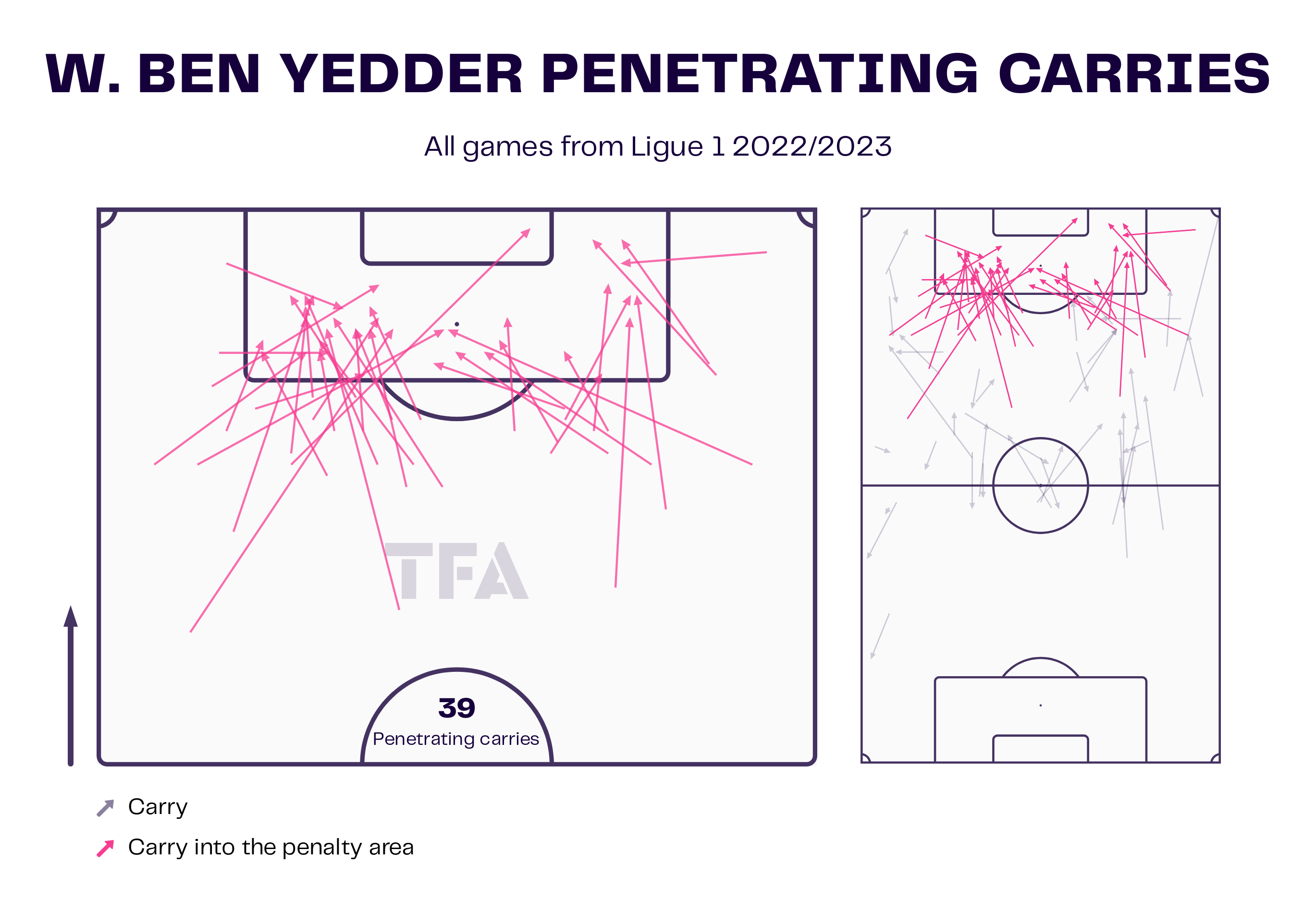 The above viz is a representation of shot assists for Ben Yedder. With two assists, Yedder has an xA of 0.08 for the matches played. He averages 0.1 assists in the current season and makes 0.19 second assists per 90. Most of the actions have been taken inside the box, with some in the final third. He makes 2.58 passes into the final third per 90 with an accuracy rate of 60%. Overall, he makes 24.94 passes on average with 80.6% pass accuracy.

Ben Yedder is an instrumental player for Monaco and has proven his worth as a player of many abilities in the form of skills and agility. He did the same for his Spanish club in La Liga and showed many why he is a player who can wreak havoc on the opposition’s defences. The above viz depicts the player’s penetrating carries during the current season. He has made a total of 39 penetrating carries into the penalty box. The player has an average of 4.59 touches in the penalty area per 90. 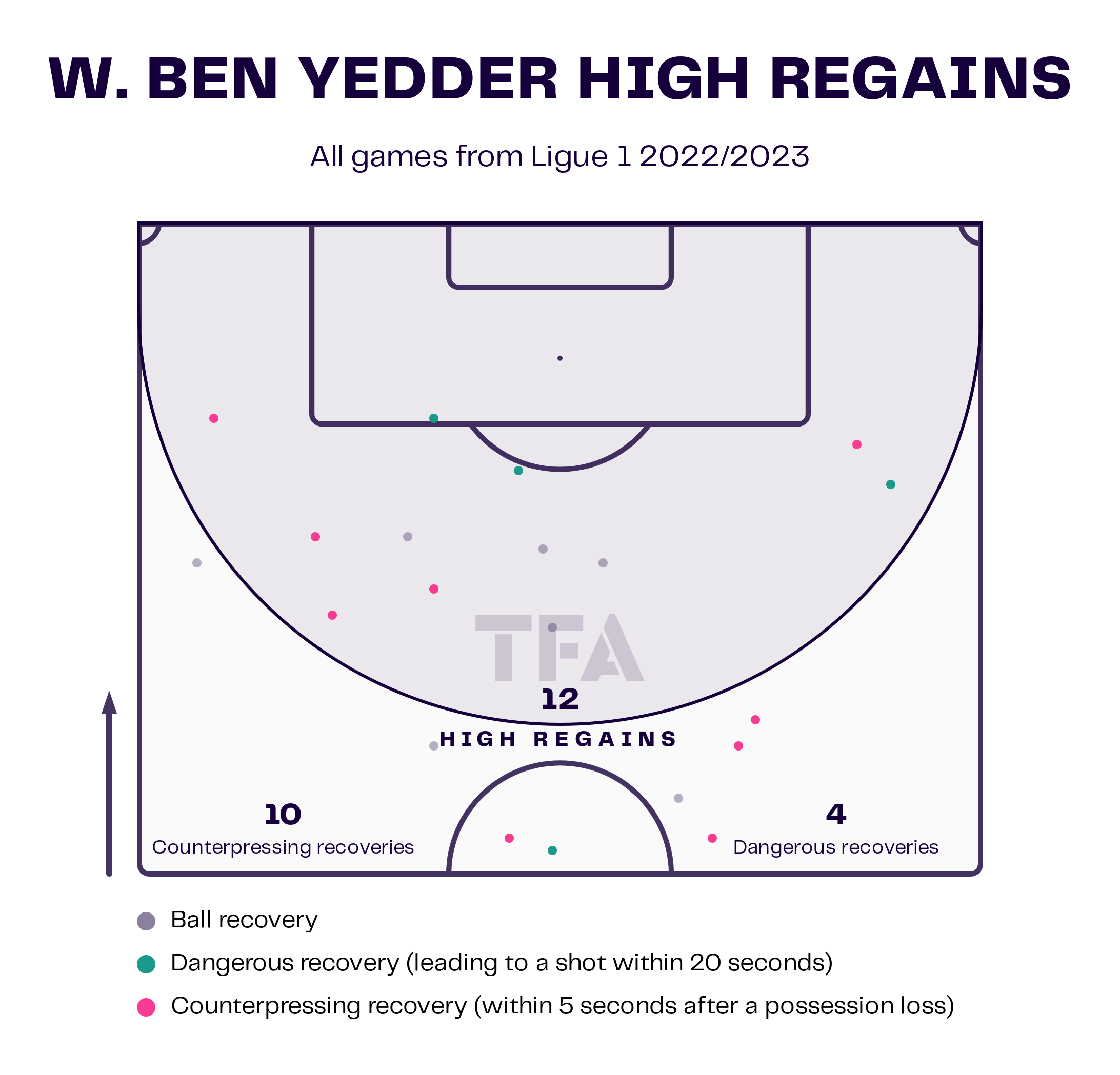 The above viz represents various high regains made by Ben Yedder for Monaco in the 2022–23 season. It can be seen that he has made 12 high regains, ten counter-pressing recoveries, and four dangerous recoveries. He makes 3.16 recoveries in the opponent’s half and 1.34 interceptions per 90. Additionally, he is successful in 64.1% of the defensive duels contested on average. Ben Yedder has the ability to put pressure on the opponent’s backline and is skilled at doing so.