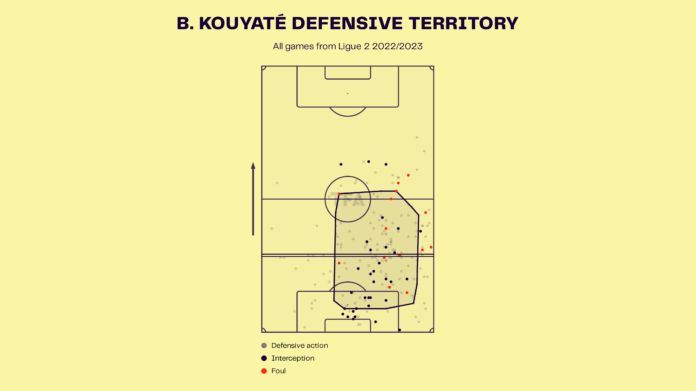 Boubakar Kouyate is a Malian professional footballer who plays as a centre-back for Ligue 1 club Montpellier and the Mali national team. Coming from FC Metz, he has just officially signed his contract with Montpellier for a period of three and a half years. Kouyate, as a defender, has conceded eight goals and kept five clean sheets in 12 matches in the Ligue 2 2022/2023 season. That means when Kouyate is on the pitch, his team concedes a goal every 118 minutes.

Montpellier have chosen to strengthen defensively this winter because, with 40 goals conceded in 19 matchdays, they have one of the worst totals in Ligue 1. Kiki Kouyate is therefore the choice of the Montpellier leadership to change course. The 25-year-old is considered athletic and very good at positioning on the pitch. In the past, Kiki Kouyate played two seasons in Ligue 1, before being relegated to Ligue 2 at the end of last season. Let’s now take a look at some of the stats from his recent performances. 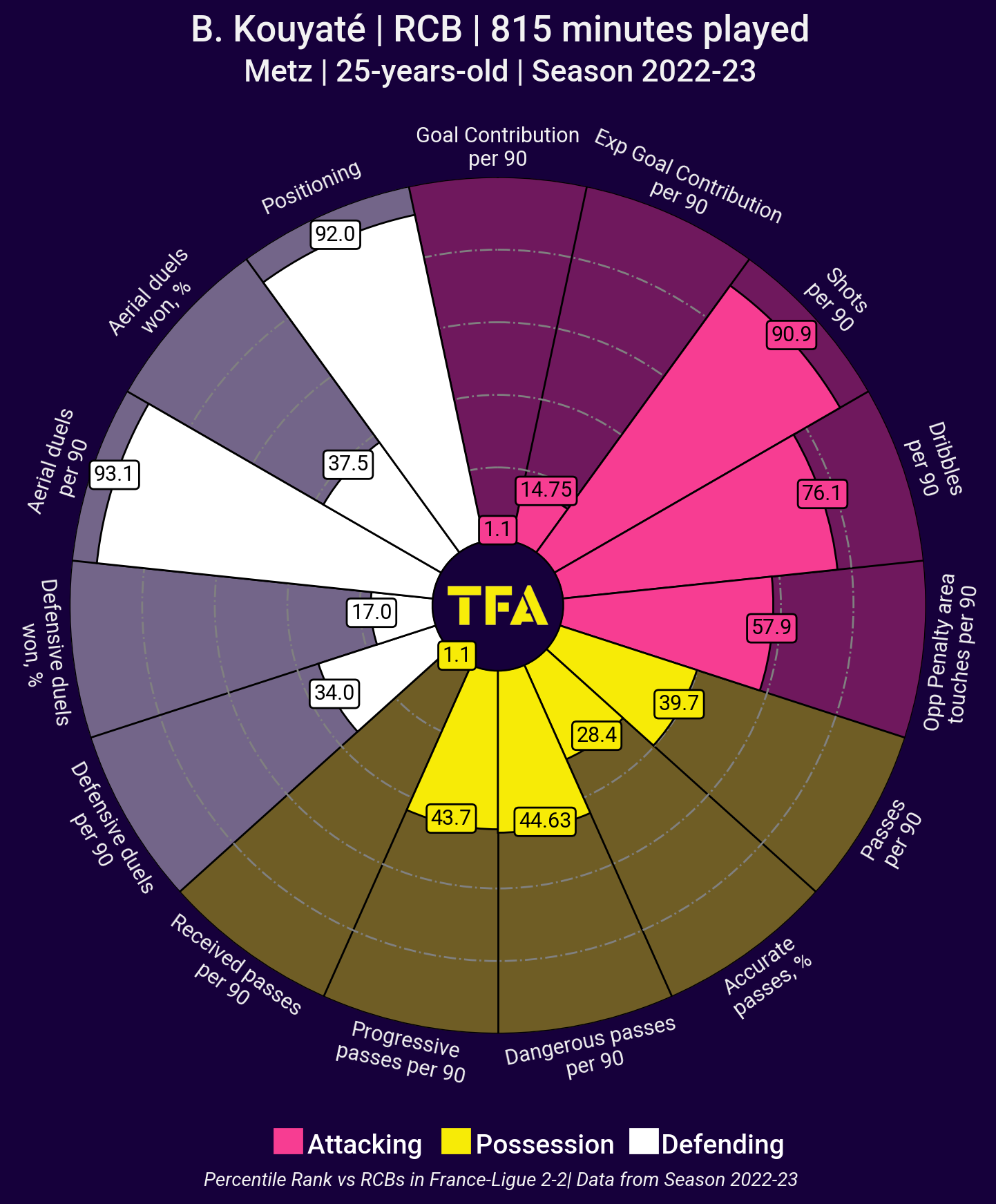 The above viz shows the percentile rank of Kiki Kouyate in comparison to the other centre-backs in Ligue 2 for all matches played by him in Ligue 2 in 2022/23. Kouyate’s defensive capabilities have been significant for Metz. He is ranked highly for dribbles and shots per 90 minutes. Defensively, he has done well and has great numbers compared to other centre-backs in Ligue 2. He ranks high in terms of aerial duels contested per 90, but he does not have much success in them. Kiki has a keen sense of positioning and is efficient in providing options to his teammates. 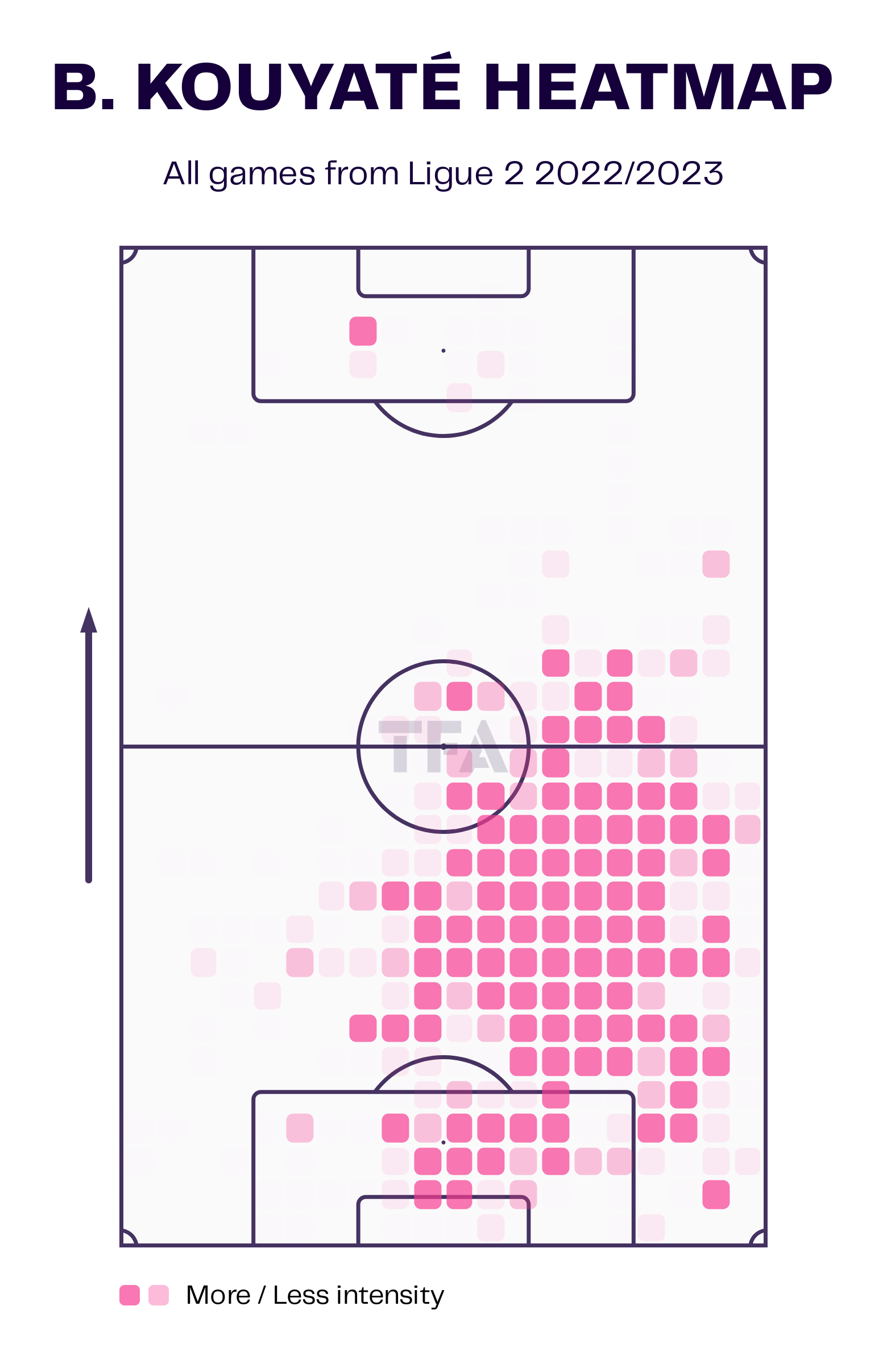 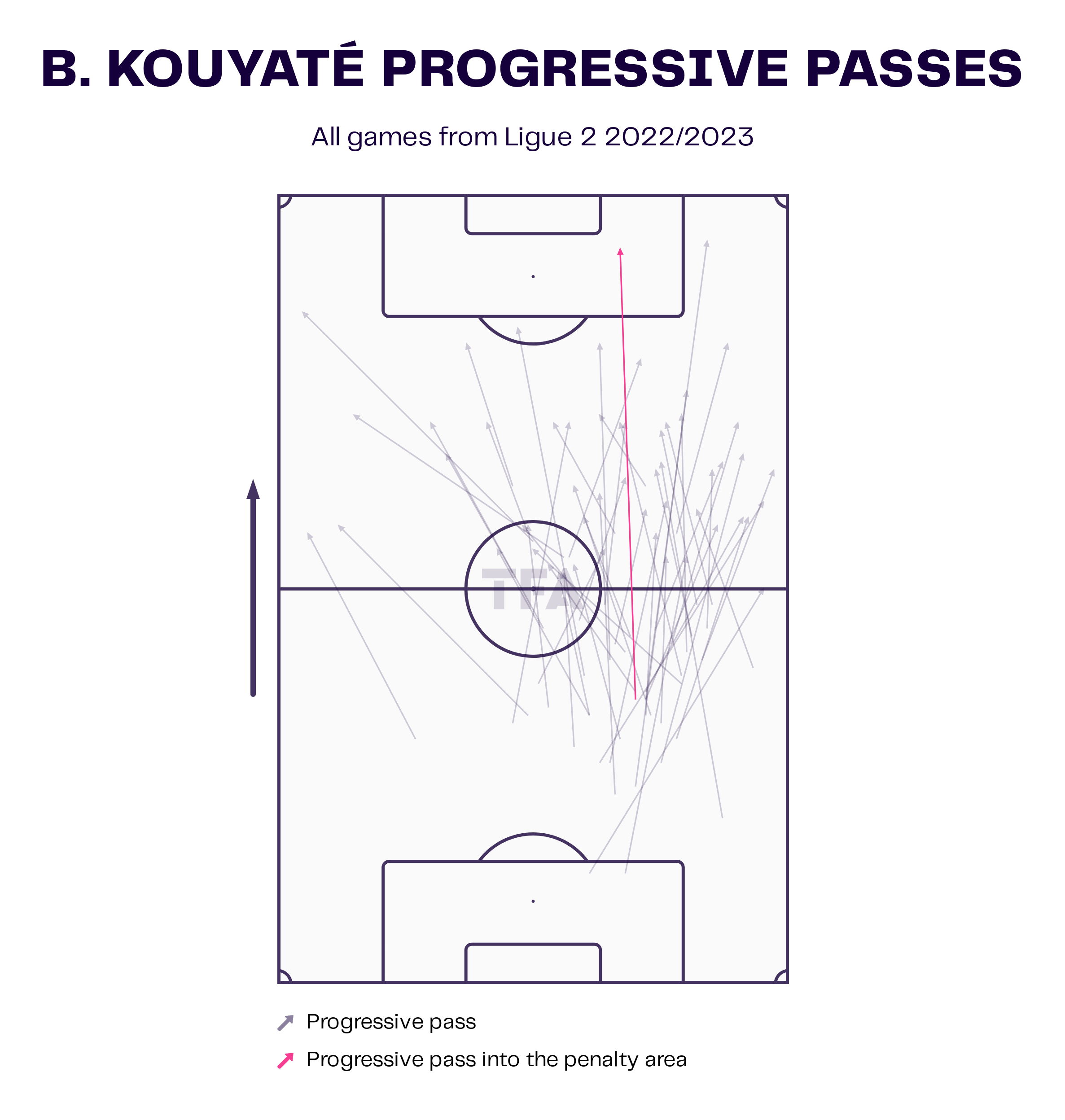 Boubakar Kouyate covers the central defensive area in the defensive and middle thirds for Metz. He performs defensive duties as a centre-back, and most of his intensity can be seen in the defensive third of the pitch for his team. Kiki averages 45.18 passes per match with a pass accuracy of 85% for the 12 matches played in the Ligue 2 2022–23 season.

He makes 0.92 progressive runs per 90 minutes and mostly prefers to release the ball into the midfield or wider areas, averaging 18.89 forward passes per 90 minutes. Additionally, he manages to make 5.6 passes to the final third area per 90, having 60.2% accuracy. 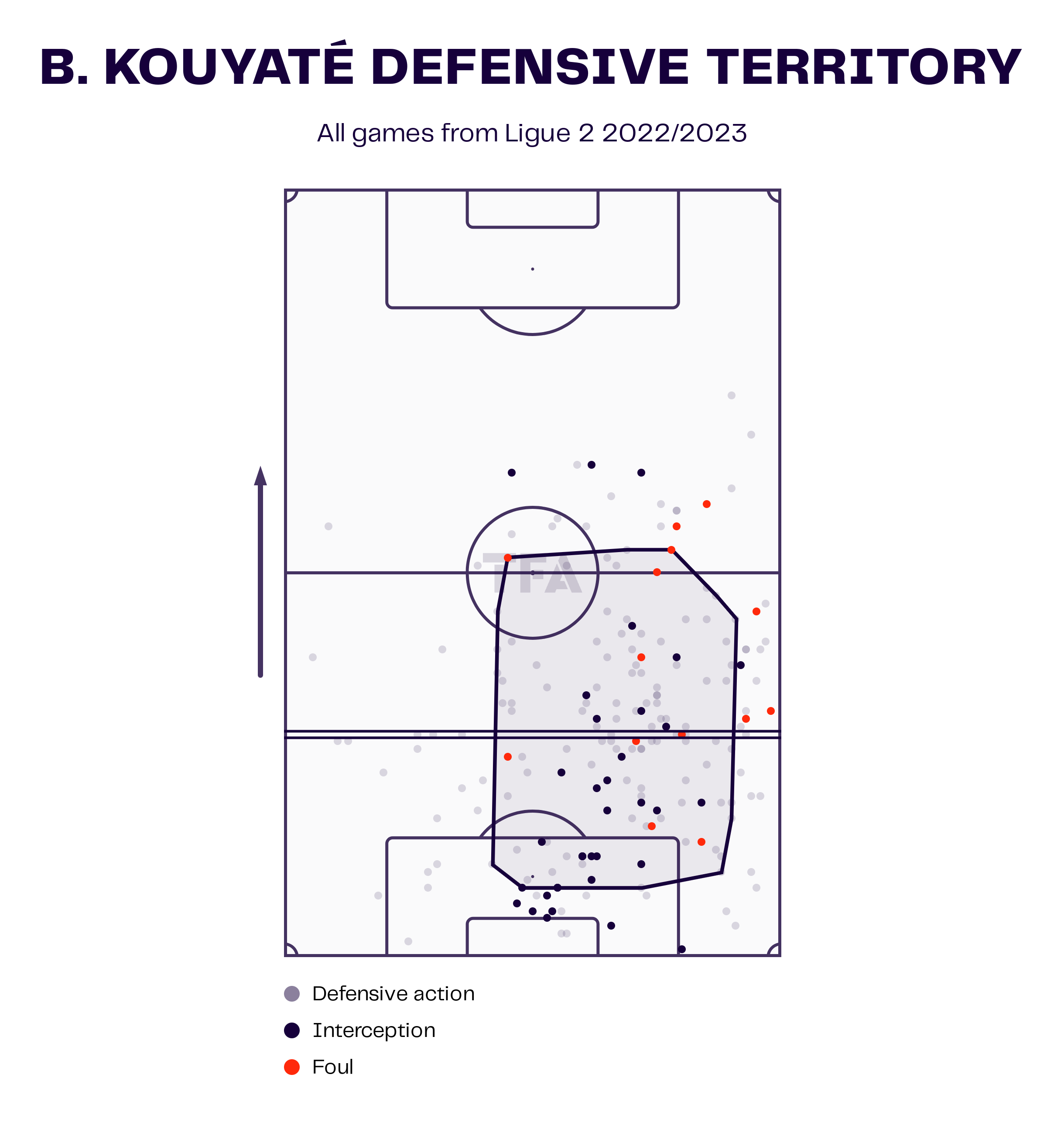 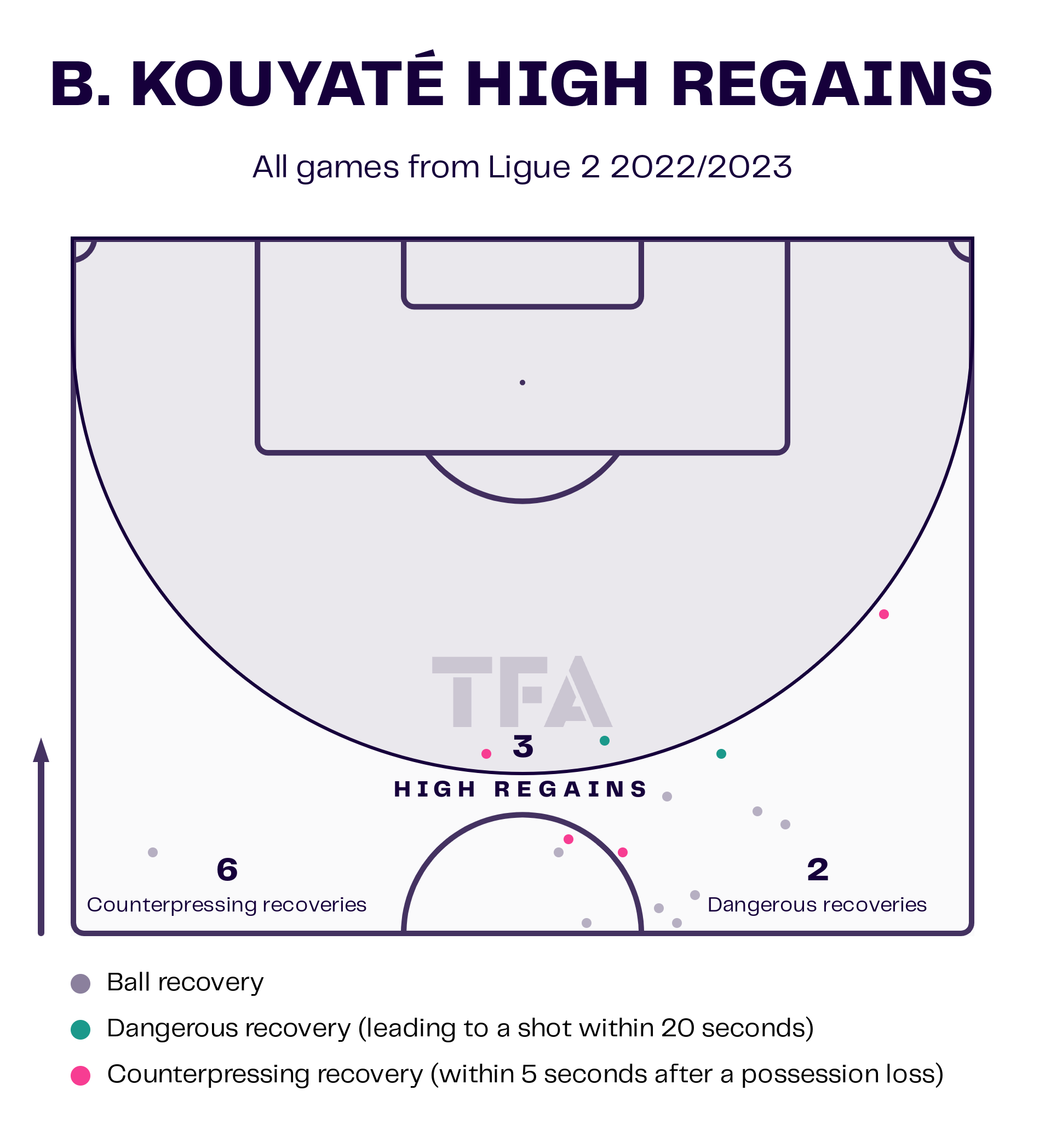 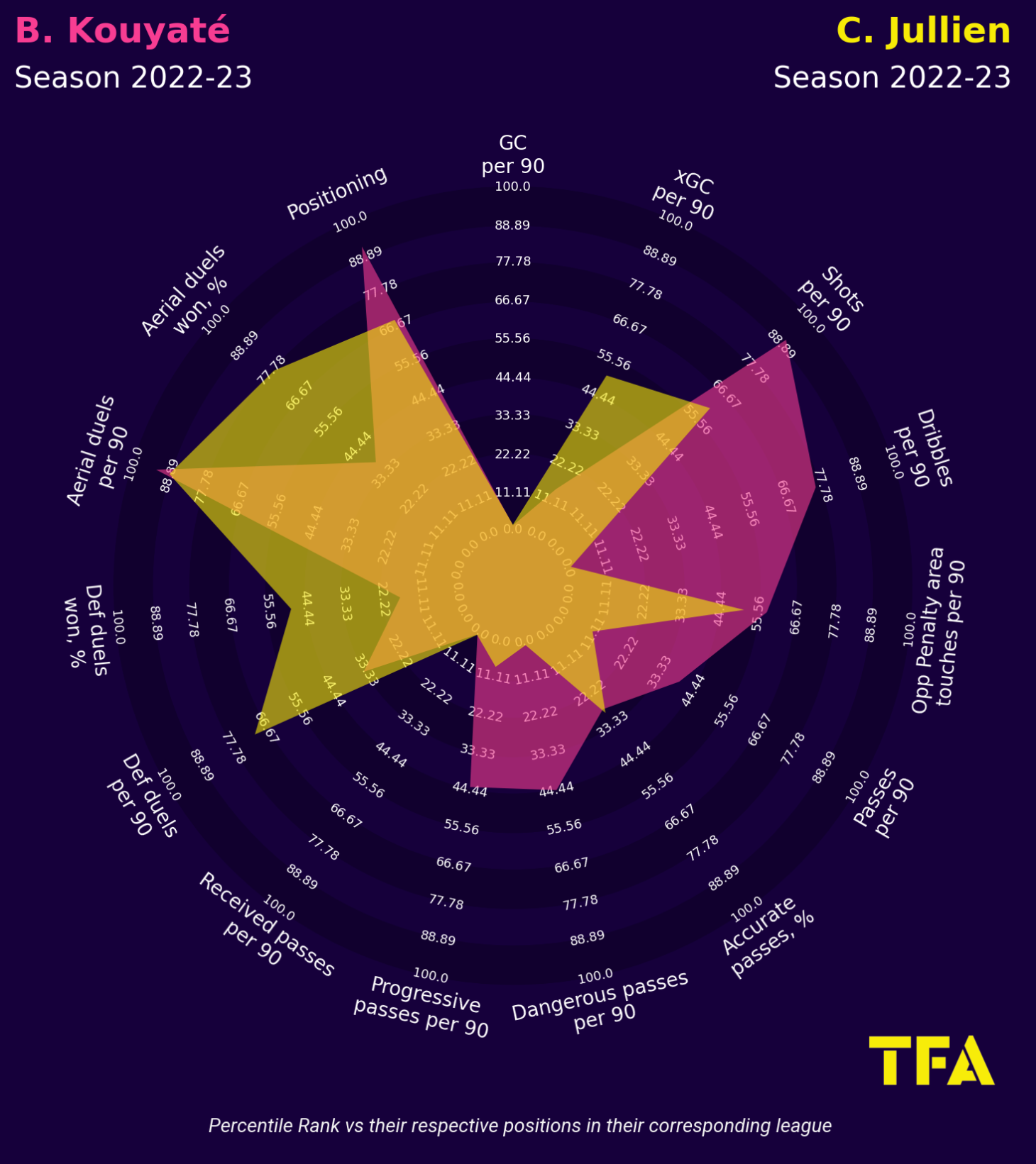 The above viz is a comparison between Kouyate and Jullien for the matches played for their teams, Metz and Montpellier, respectively. Kouyate has done well in defence and has better numbers in terms of aerial duels won. Jullien, on the other hand, has fared much better in terms of winning defensive duels. Kouyate has impressive passing abilities and has made more accurate passes as well as fared better in progression and positioning abilities.

Overall, Kouyate is a player who played in the top division for a while before being relegated. He helped Metz keep five clean sheets in twelve matches played in the second division and will be looking to add many more to his current squad. Montpellier are in 16th and conceded the second most goals currently. Kiki will be keen on preventing his current side from relegating him by proving his worth as a defender in Ligue 1 this time around.

Under the microscope: How Rennes’ skipper is leading the team with...