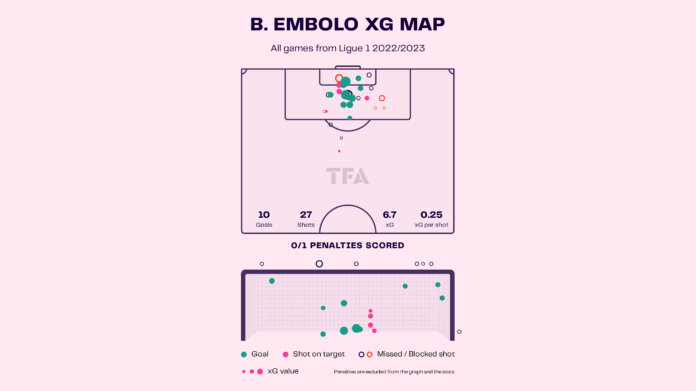 Breel Embolo is a professional footballer who plays as a forward for Ligue 1 club Monaco and the Switzerland national team. Breel Embolo has scored ten goals in 19 matches so far in the Ligue 1 2022-2023 season. Six of his ten goals came at home, while the other four came on the road. Overall, Embolo’s total goal contribution (goals plus assists) is 12. His contributions in front of the goal have been monumental for Monaco, as he has helped his team sail through matches. He joined Monaco from Bundesliga club Borussia Mönchengladbach in May. He was impressive in the German top division and made his move to France on a four-year deal. Breel Embolo appears to be the player who will help Monaco finish high in Ligue 1 this season. Below are his stats from the current season in Ligue 1 for Monaco. 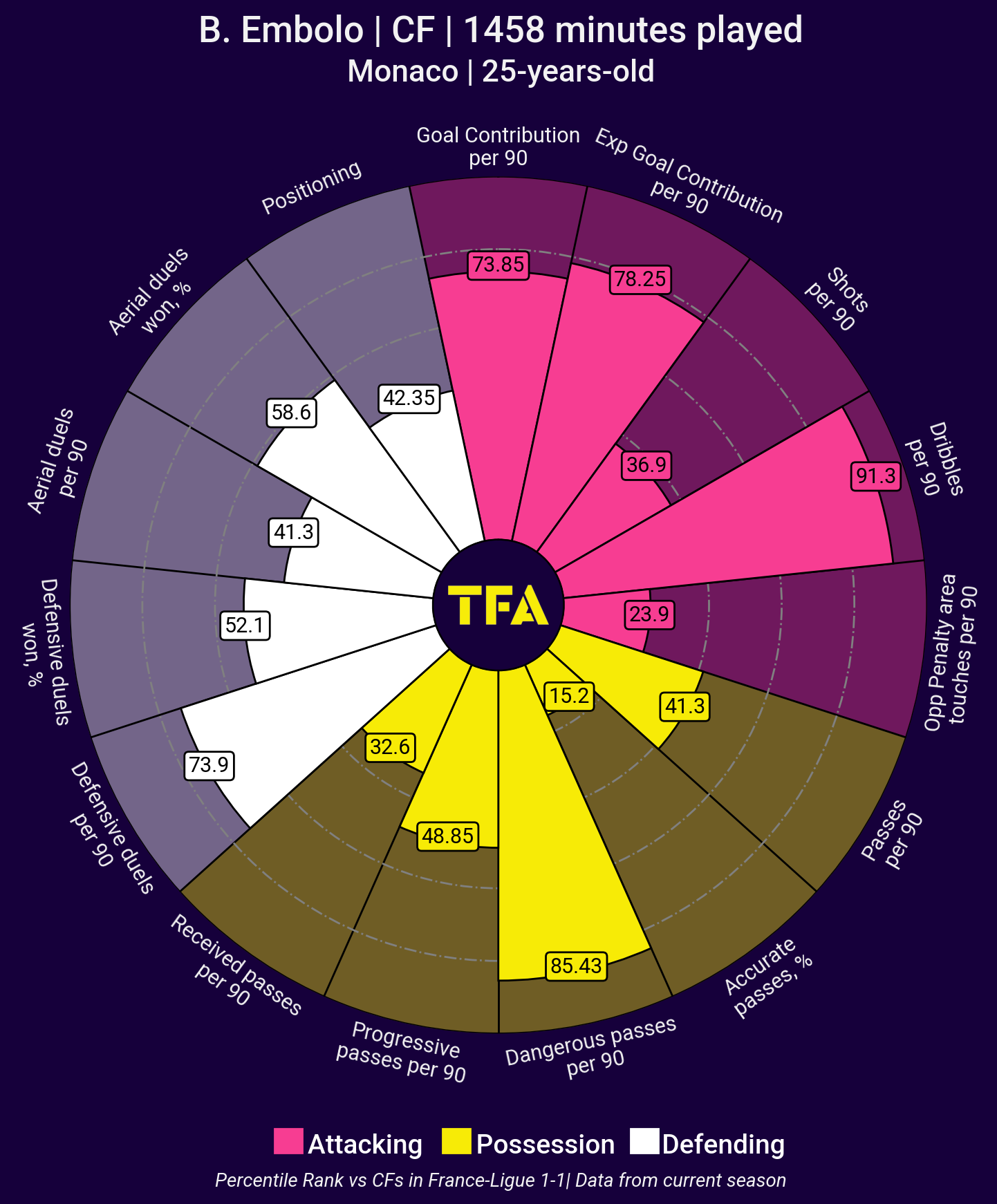 The above viz shows the percentile rank of the player in comparison to other players in Ligue 1. Breel Embolo is a big threat in front of goal and ranks among the top for goal contributions, averaging 0.6 goals in the league. Overall, he ranks highly in expected goals per 90, shots, and touches in the opposition’s penalty area per 90, proving to be an extremely efficient resource for the team. Embolo gets 3.22 touches in the opposition’s penalty area per 90 minutes. 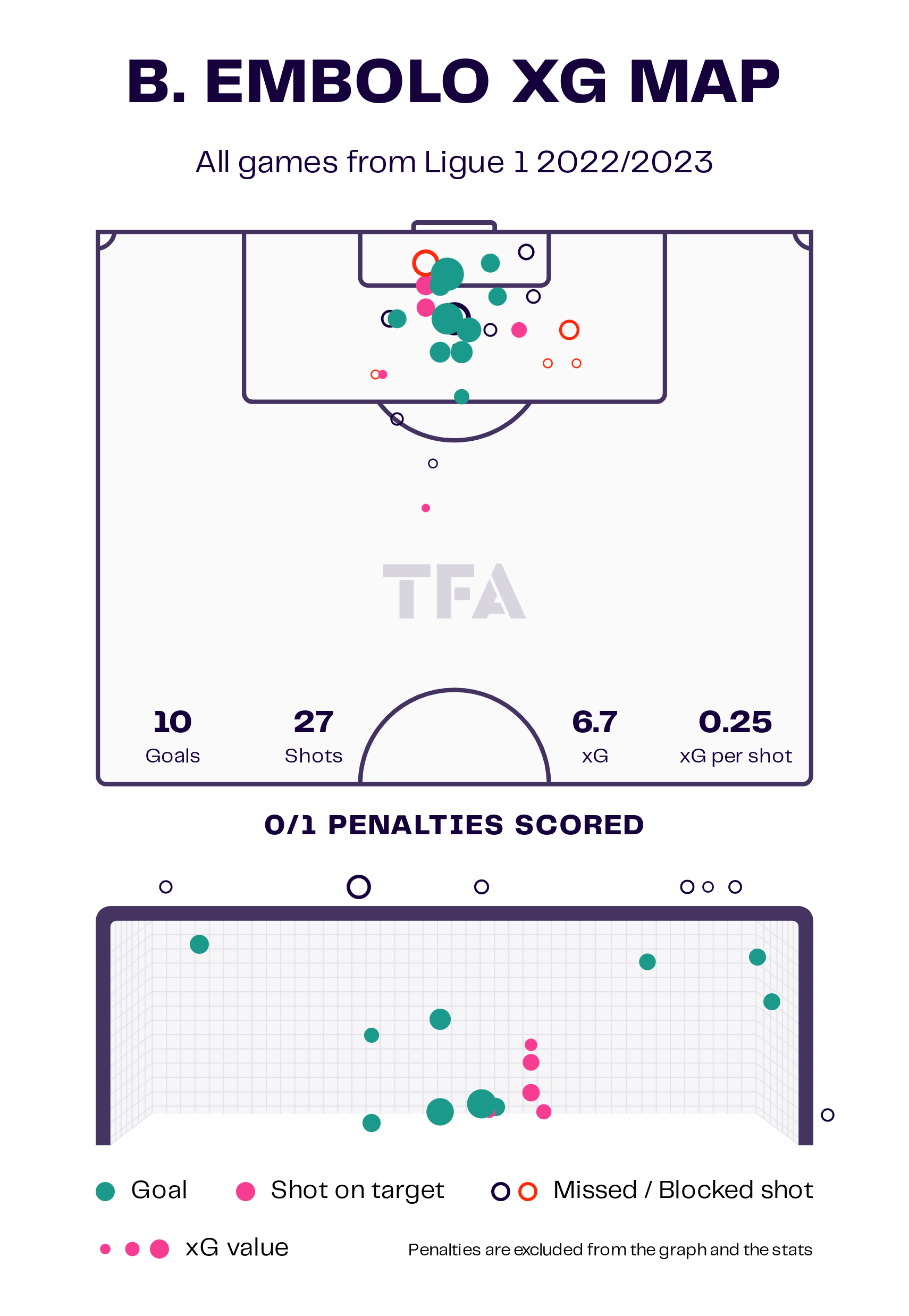 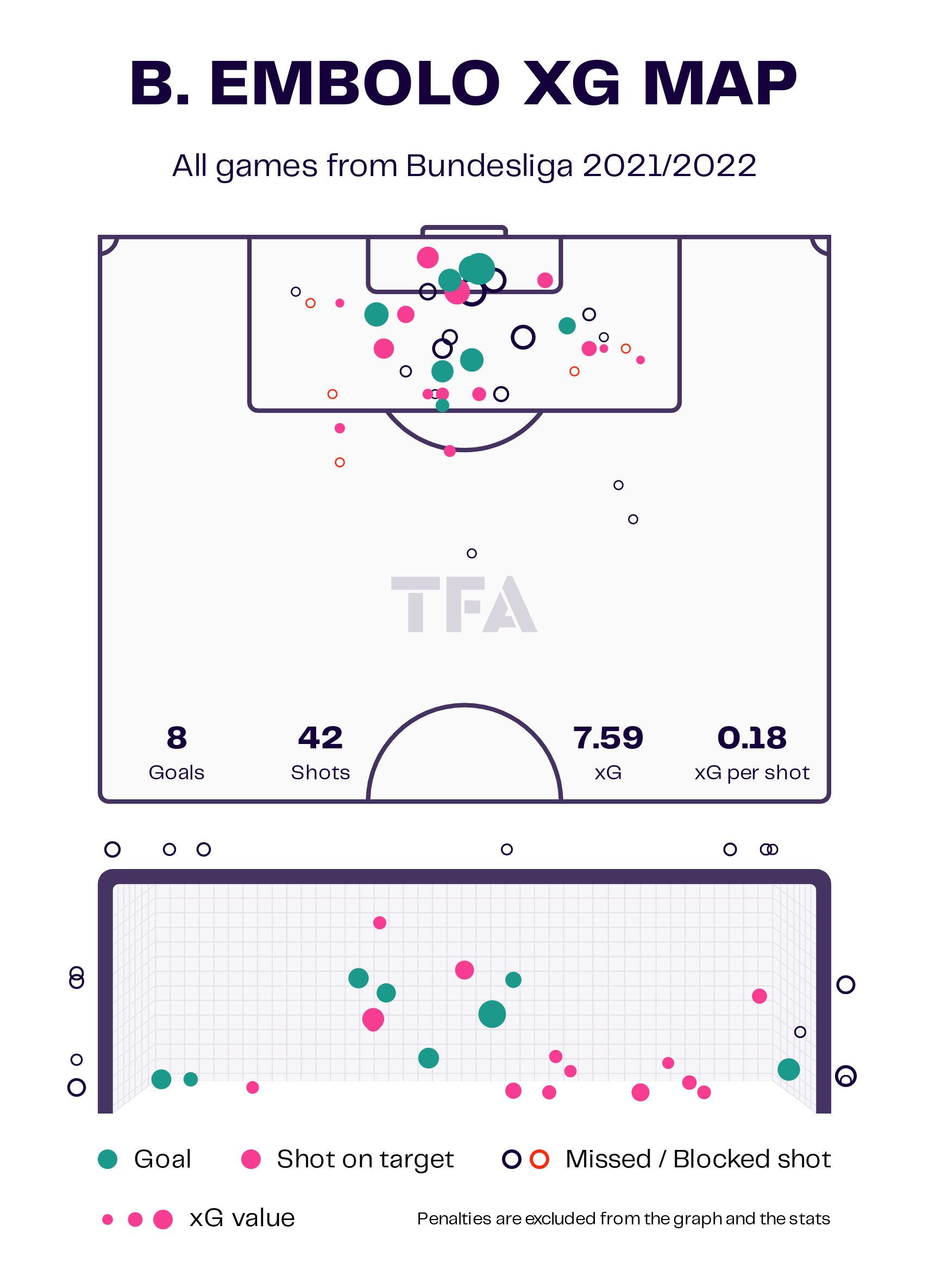 Embolo is pumping goals for Monaco and is a crucial part of their attack. In the 2022–23 French Ligue 1, Embolo has played 19 matches. Breel has 22 shots on target from a total of 27 and has scored ten goals (6.7 xG). He averages 22 passes per game, has an 84% pass completion rate, and has two assists. All of his goals have come from inside and around the six-yard box, along with a few attempts on goal from outside the box. He averages 1.73 shots per 90 minutes with 57% accuracy. He has already bettered his record from last season, as seen above. He will look to double his tally this season with almost half the season remaining. His goals will play a crucial role in Monaco’s battle for Europe. 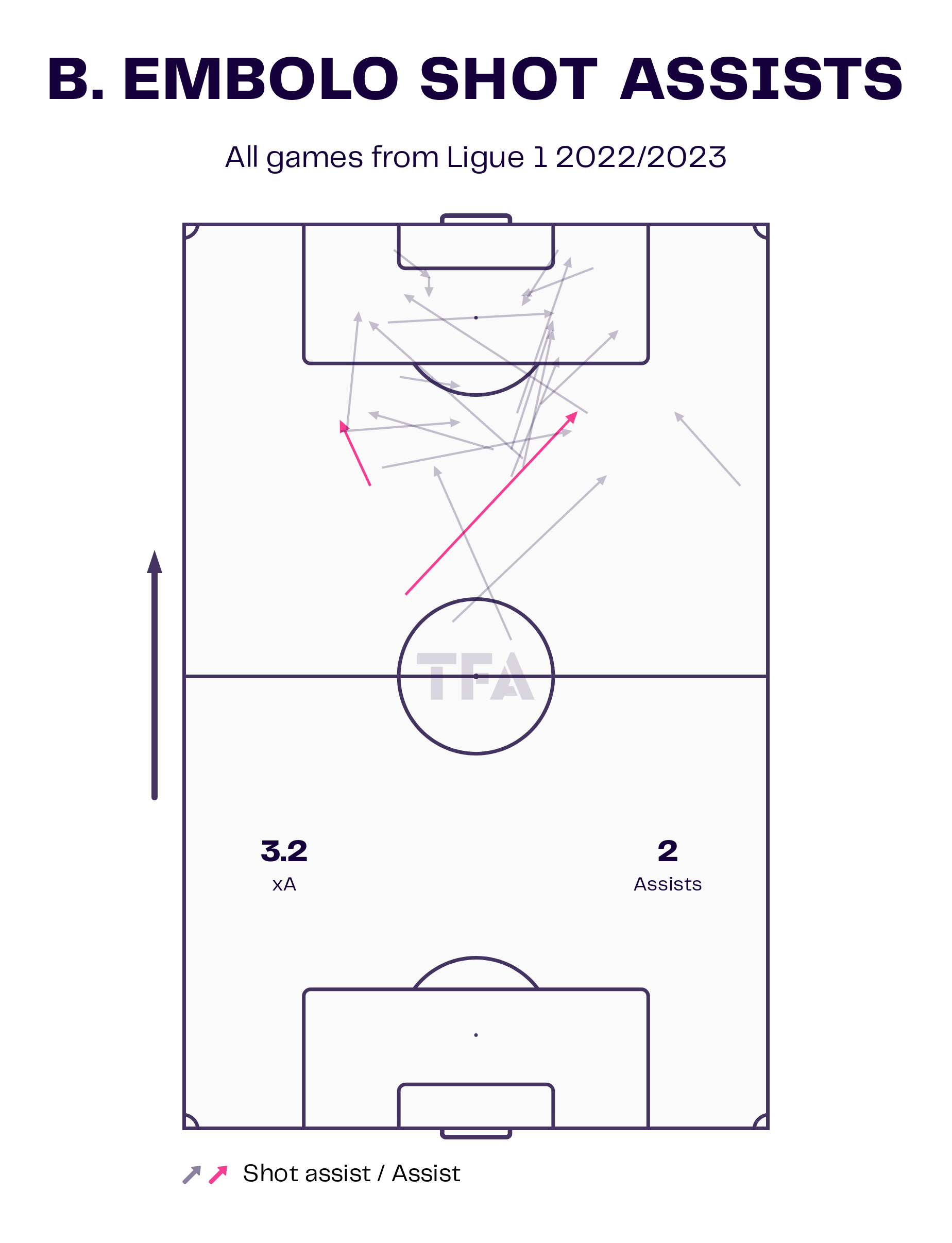 The above viz is a representation of shot assists for Breel Embolo. With two assists, Breel has an xA of 3.2 for the matches played. He averages 0.12 assists in the current season and makes 1.23 shot assists per 90. Most of the actions have been taken inside the box, with some in the final third. He makes 2.1 passes into the final third per 90 with an accuracy rate of 61.6%. Overall, he makes 17.9 accurate passes on average. 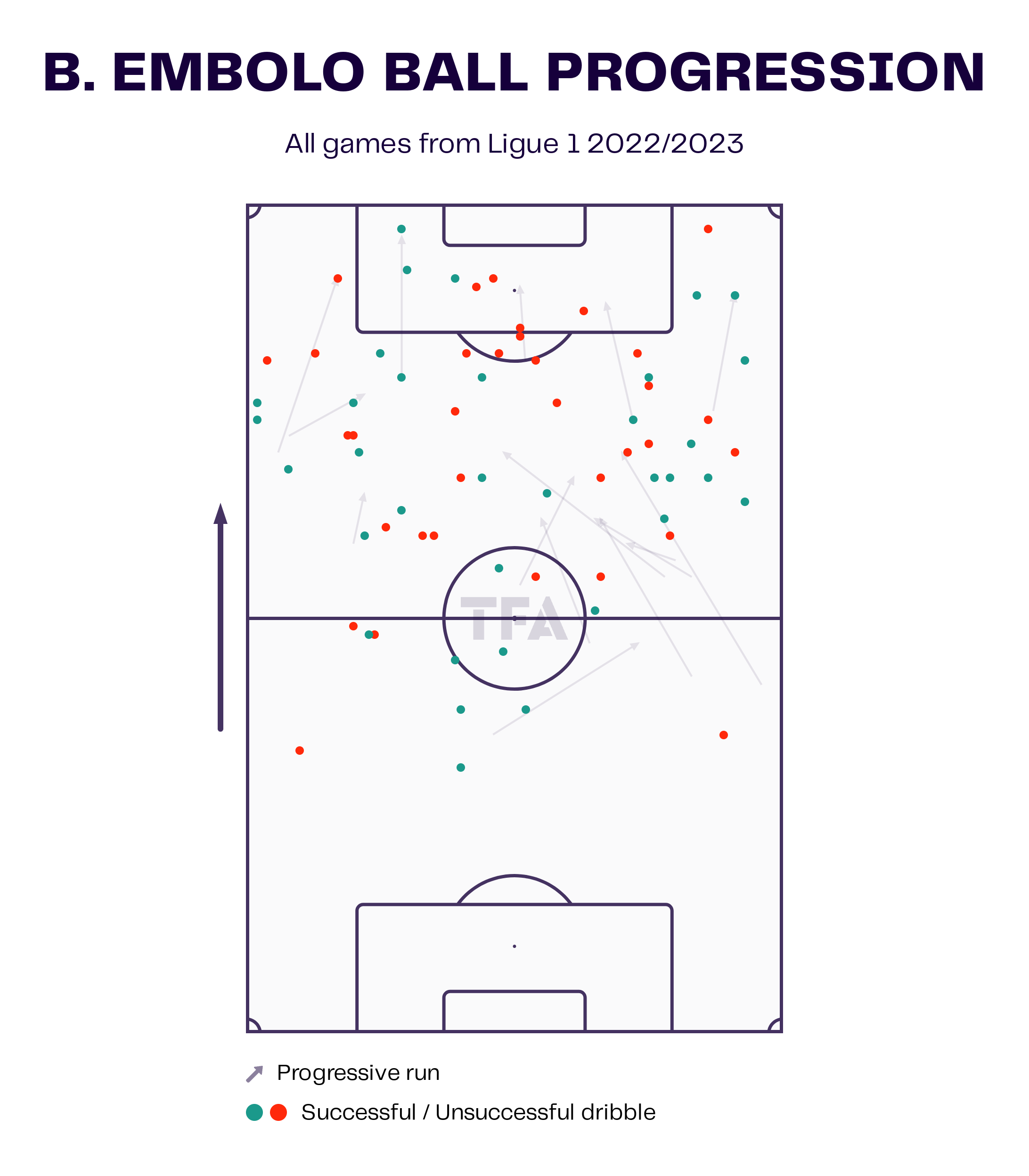 Embolo is an instrumental player for Monaco and has proven his worth as a player of many abilities in the form of skills and agility. He did the same for his nation this time around and showed many why he is a player who can wreak havoc on the opposition’s defences. The above viz depicts the ball progression made by the player this season. He makes 1.2 progressive runs on average and completes 2.4 successful dribbles per 90. Breel also makes 3.89 forward passes with a 66.2% rate of accuracy. 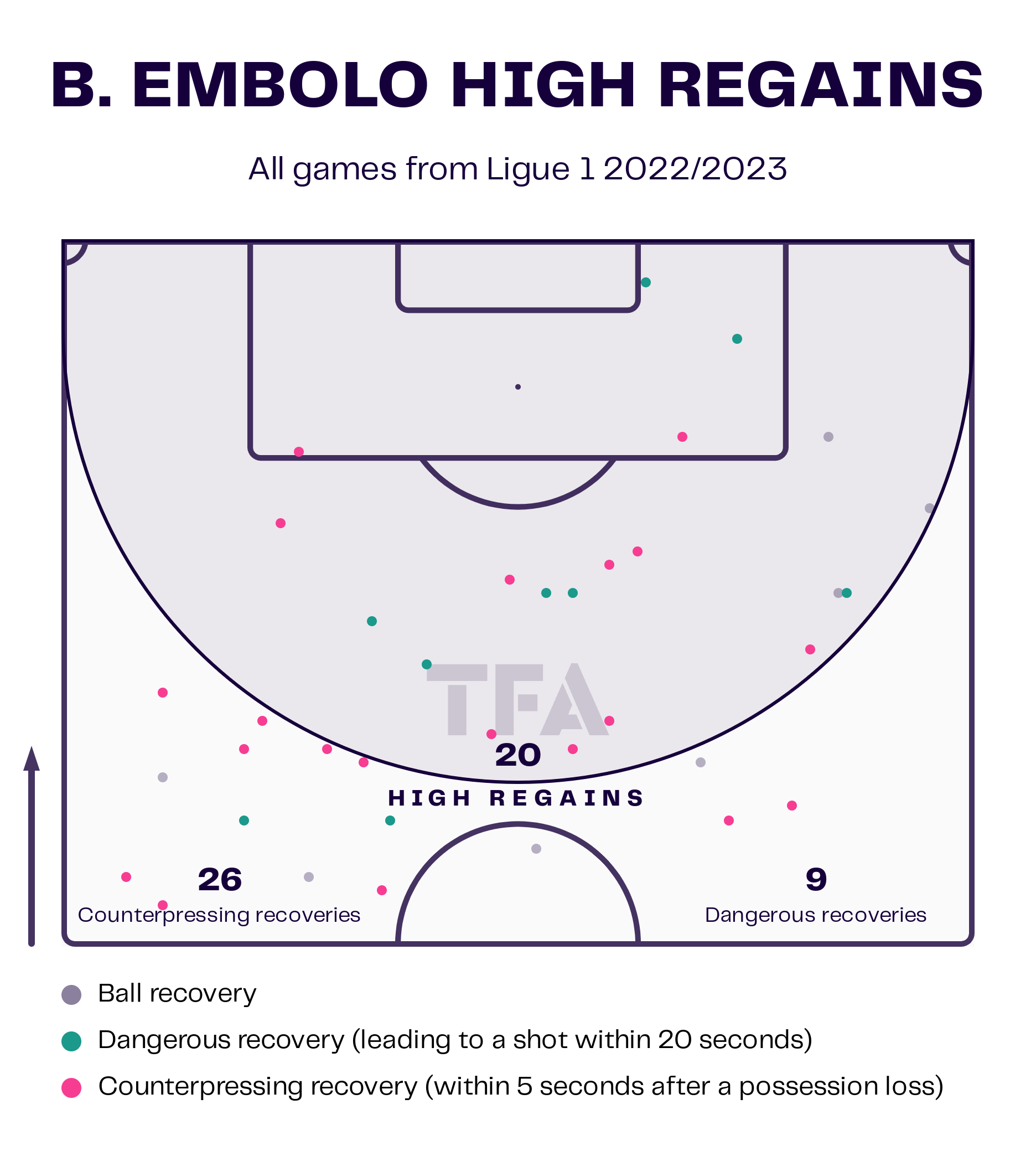 The above viz represents various high regains made by Embolo for Monaco in the 2022–23 season. It can be seen that he has made 20 high regains, 26 counter-pressing recoveries, and nine dangerous recoveries. He makes 3.15 recoveries in the opponent’s half and 1.2 interceptions per 90. Additionally, he is successful in 53.4% of the defensive duels contested on average. He has the ability to put pressure on the opponent’s backline and is skilled at doing so.

Breel Embolo will look to continue his form going into the second half of the season. His team is sitting in European positions. They will be looking to win more games in the second half and climb the league table. Embolo will be the key man for Monaco in their race for European football.

Transfer Analysis: Why the versatile Evertonian defender could be heading to...