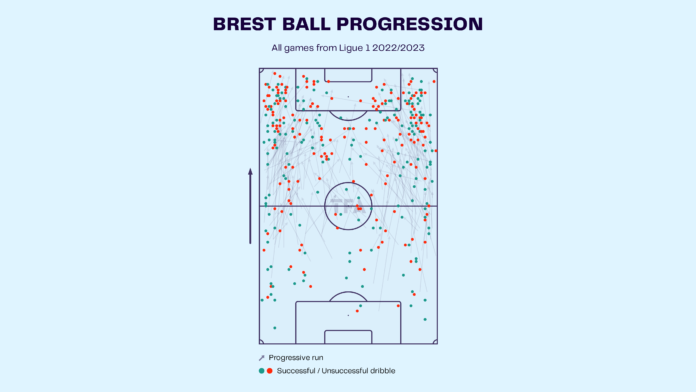 Stade Brestois 29, or simply Brest, is a French football club based in Brest. Following the 2018–19 season, the club has played in Ligue 1, the top division of French football. They finished 11th in the 2021/22 Ligue 1 season. Brest is currently 16th on the table and have played 15 matches in the Ligue 1 2022/23 season. The French side has won just two of their last 13 games, including friendlies, losing eight. The current Ligue 1 season resumes in a week, and Brest have a task in hand, which is to stay out of the relegation zone. As one of the bottom half’s more expansive teams, and as their 7-0 drubbing by a counter-attacking Montpellier proved, Brest can be exposed defensively. Despite finishing eleventh last season, only the bottom five teams conceded more than Brest’s tally of 57. For Ligue 1 teams with an additional relegation spot, this season is even more difficult than last. We now look at some of the stats that show how Brest have performed so far this season. 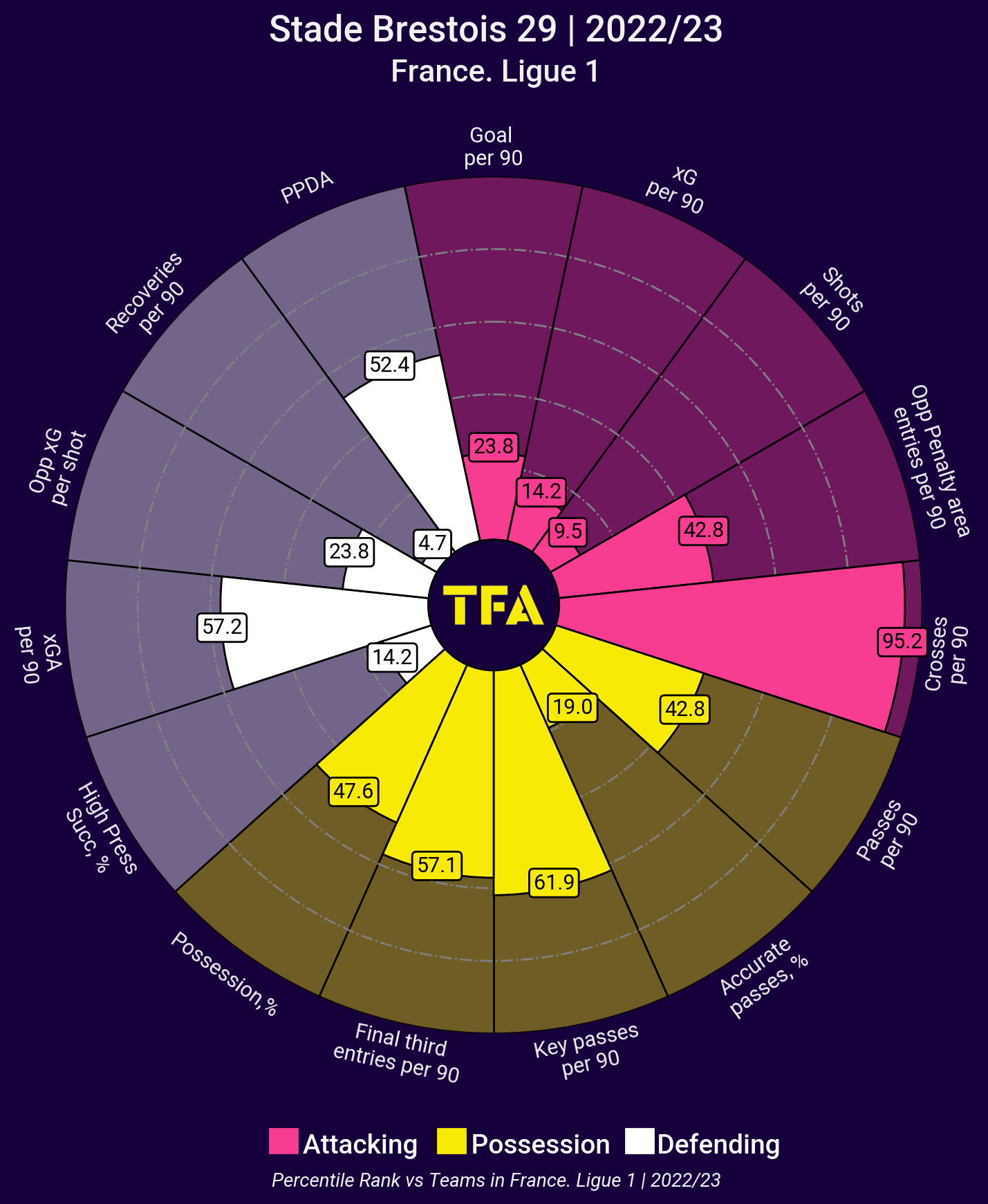 Brest is currently 16th in the Ligue 1 table with 13 points. They have scored only 16 goals and conceded 24 in all matches played. The above graph shows the percentile rank of the team in comparison to the other teams in Ligue 1. It shows that Brest have a very low percentile rank in all the departments except for crosses per 90. They are the highest-ranked team in terms of crosses per 90. The French side has been unable to dominate in most of the games and has failed to make any impactful performances that could guarantee safety this season. They are lacking in passing, possession, and defensive abilities. 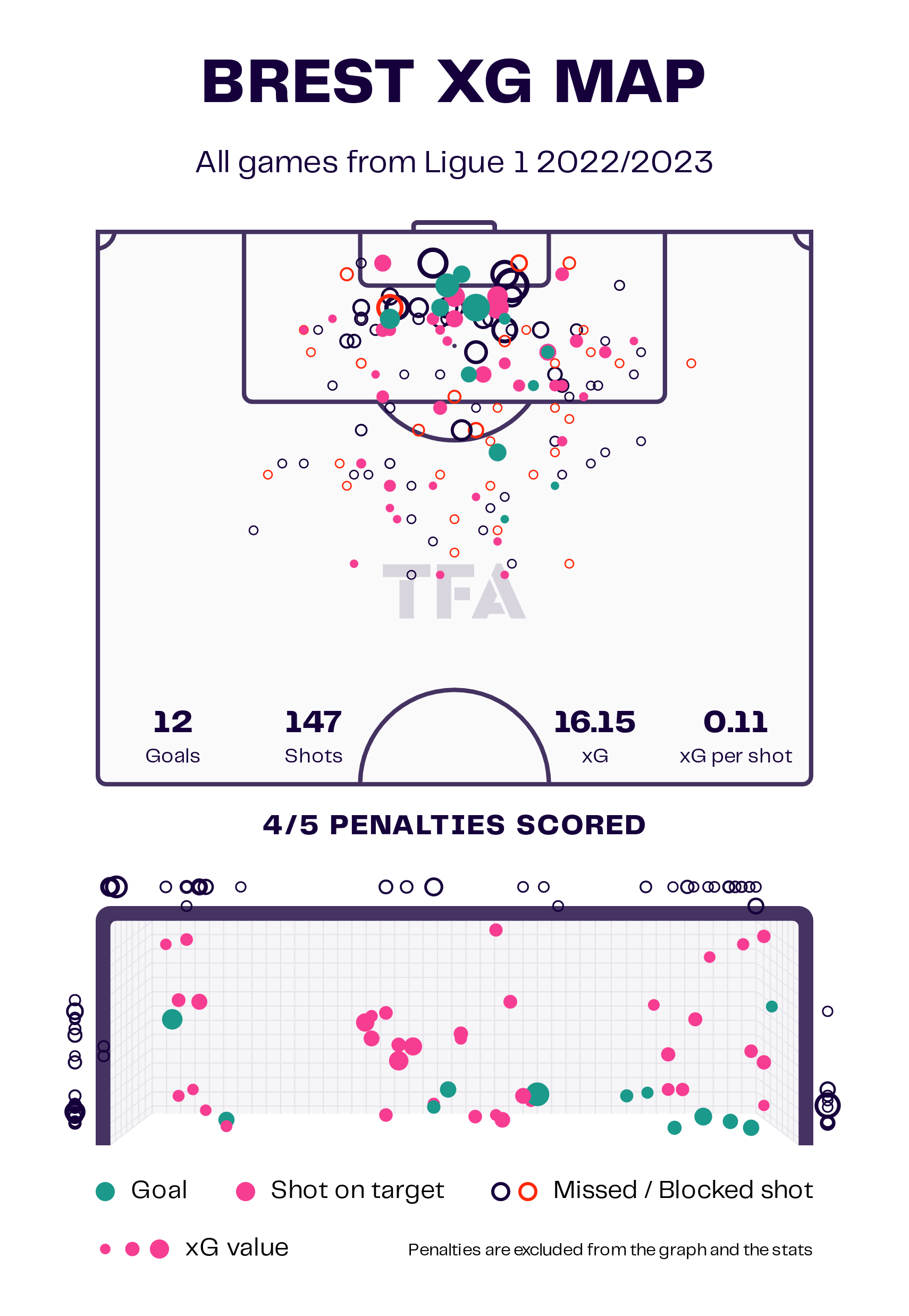 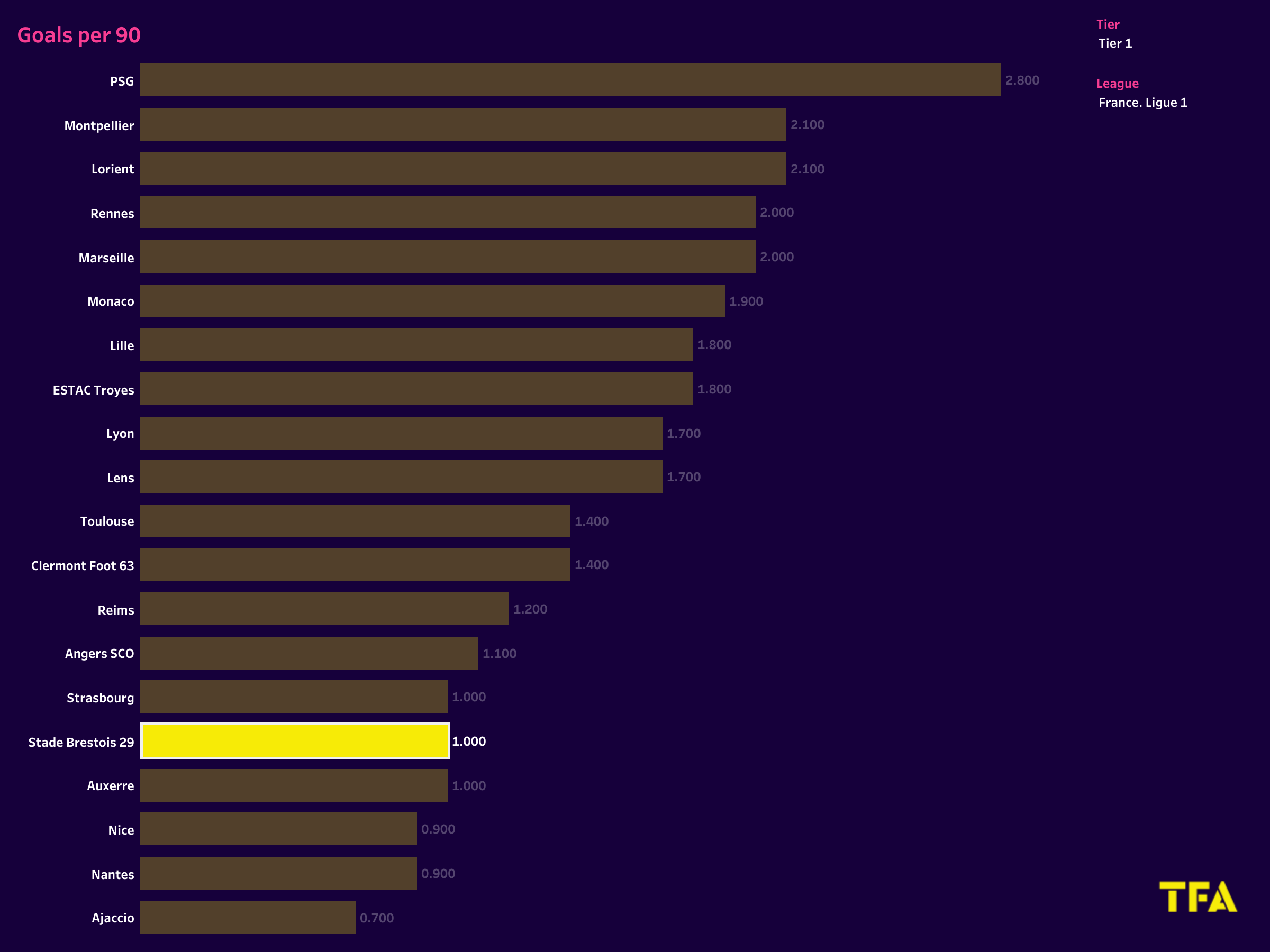 Movement up the pitch 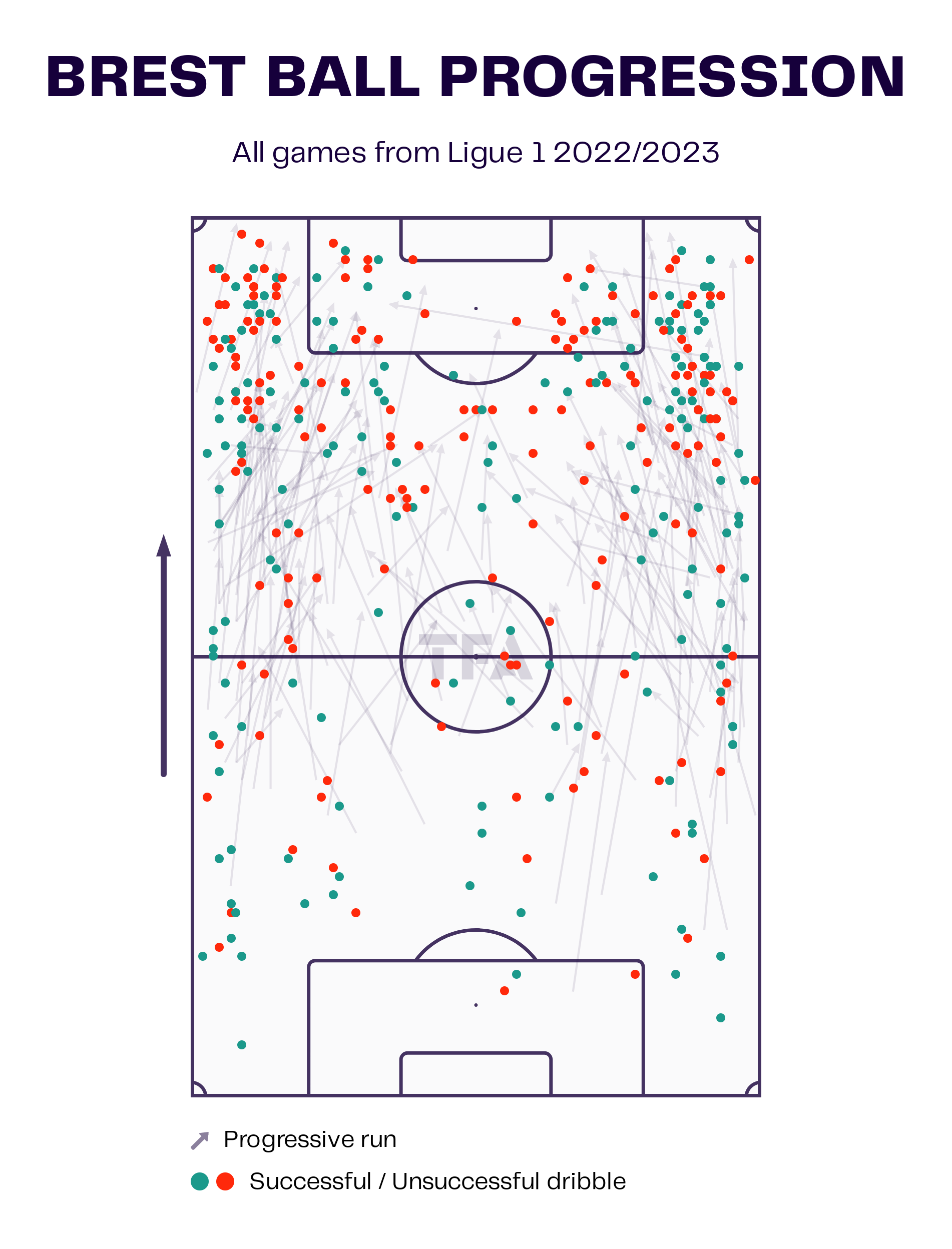 The above viz is a representation of ball progression made by the team in the current season. It can be observed that Brest does not use much of the central attacking line and instead prefers to move up the pitch using wider areas. They also heavily depend on crosses into the box in order to generate an attacking threat. Brest have a success rate of 27 per cent for crosses in Ligue 1, which is the fifth highest in the league. 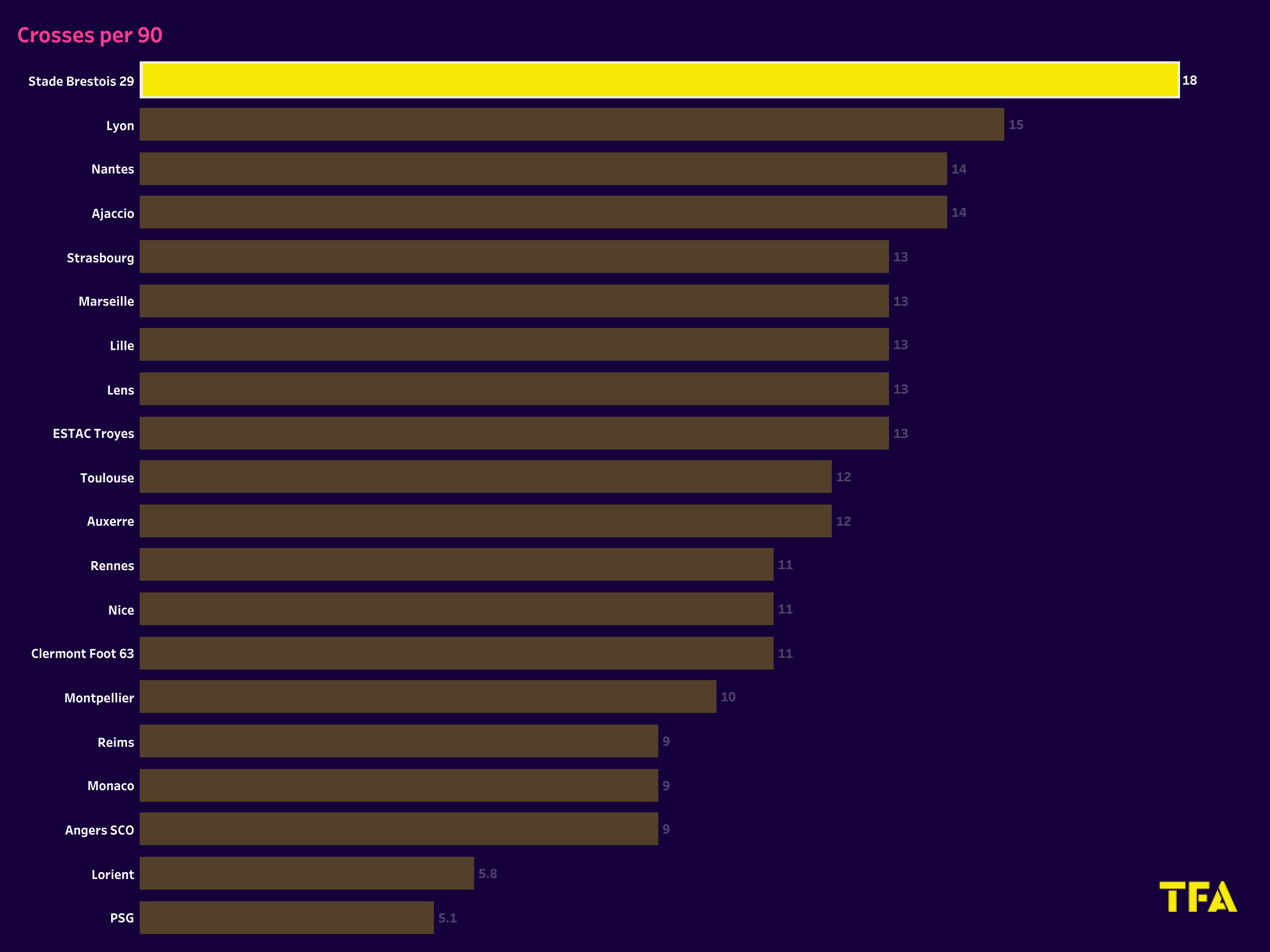 Most teams resort to putting constant crosses into the box in the final and dying minutes of the game especially when they are trying to find a goal or rescue points. Brest is the team with the most number of crosses per 90 currently in the 2022/23 Ligue 1. This sort of strategy may result in lethal counterattacks and is a high-risk and return strategy. 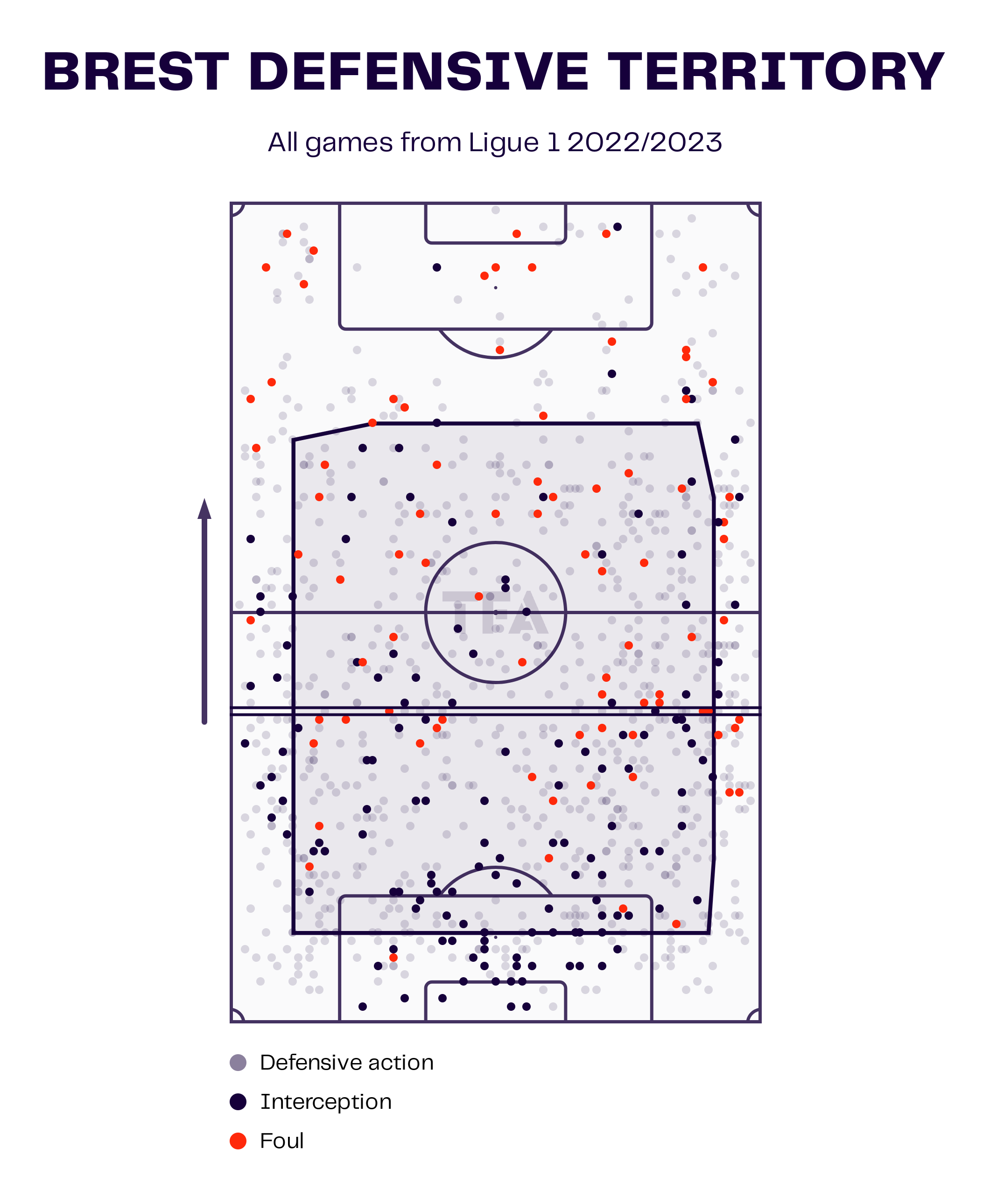 Brest will play their next fixture on December 28, 2022, against Lyon at Stade Francis-Le Blé in the French Ligue 1. Both teams are playing to grab rather lucrative spots at the table. Brest requires a complete overhaul and a boost in morale in order to remain in Ligue 1 for an extended period of time.