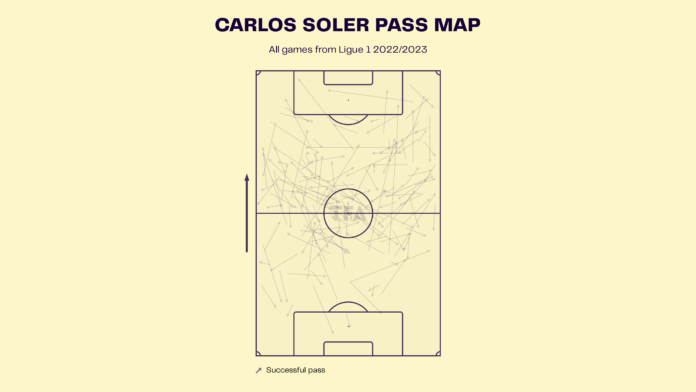 Carlos Soler is a Spanish professional footballer who plays as a central or right midfielder for Ligue 1 club Paris Saint-Germain and the Spain national team. He joined PSG in the summer of 2022 from La Liga side Valencia. Currently, PSG are on top of the table and are soon going to face 19th-place Strasbourg on their return. It will be interesting to see if Soler makes the starting eleven. As of now, Soler has played seven matches for PSG in Ligue 1, scoring two goals and grabbing one assist. Below are some stats indicating why Carlos Soler can be relied on by PSG in the midfield. 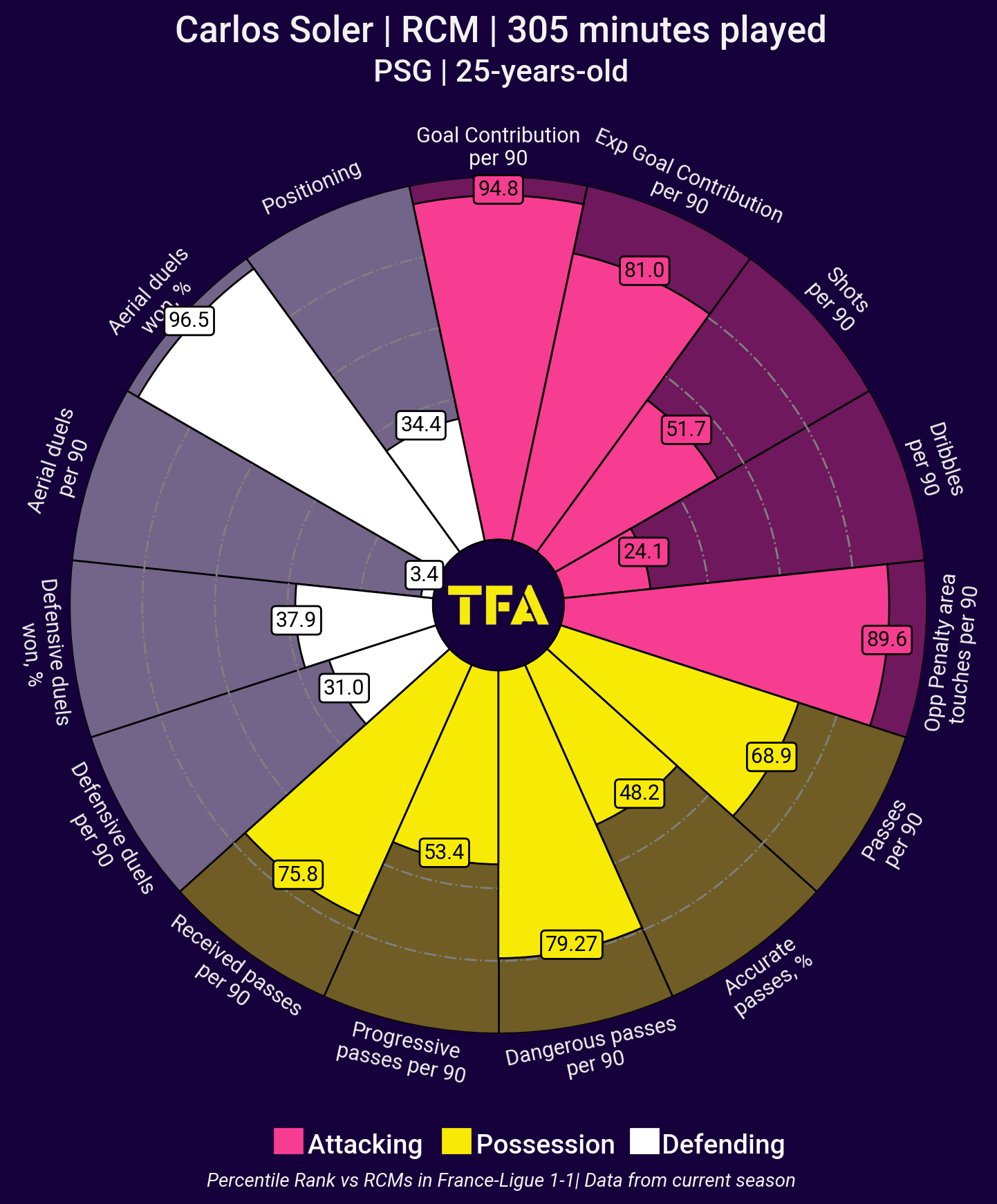 The above viz shows the percentile rank in comparison to the other right central midfielders in the league. Carlos Soler’s attacking stats are in a good range for a midfielder. He is ranked highly for goal contributions, expected goal contributions, and touches inside the opposition penalty area for PSG. The player’s ability to defend has been extraordinary. He is ranked high for aerial duels won, and this has been a crucial advantage for the player and his team. Soler has also maintained impressive possession stats and ranks well in terms of dangerous passes per 90.

Contributions in the attack In the 2022–23 French Ligue 1 season, Carlos Soler has played four matches (plus three as a sub). They have two shots on target from a total of three shots and have scored two goals (0.99 xG). Carlos Soler averages 24 passes per match with a pass completion rate of 86% and one assist. These are indeed impressive numbers given the amount of time he has played for the team. 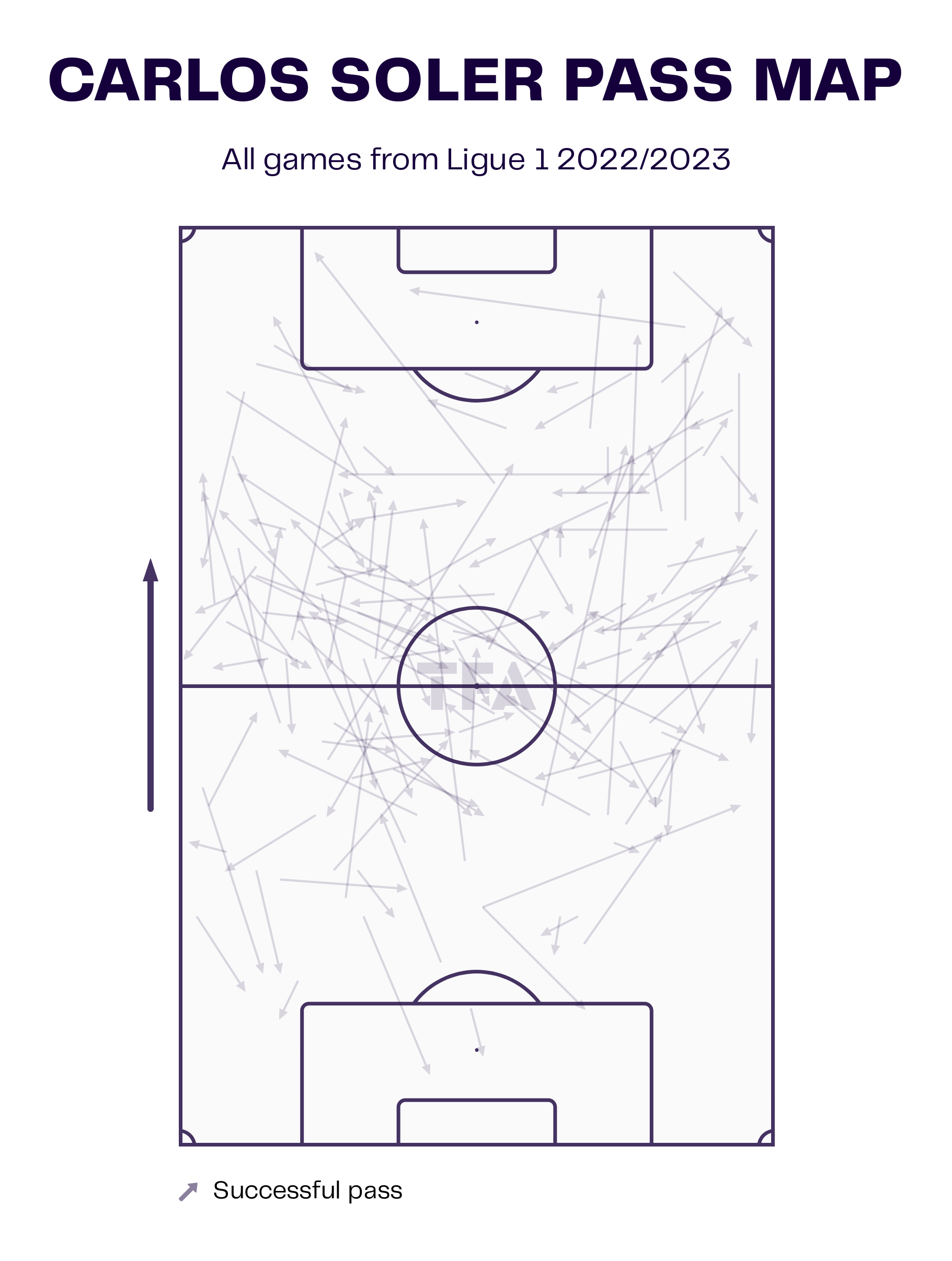 Carlos Soler usually plays on the right side of the midfield and makes movements up and down the pitch in order to create space and receive the pass. Soler makes 49.28 accurate passes on average per 90. He has a passing completion rate of 87% per 90. It can be seen that Soler makes many passes back towards the backline or centre-backs, indicating his tendency to maintain possession for the team. 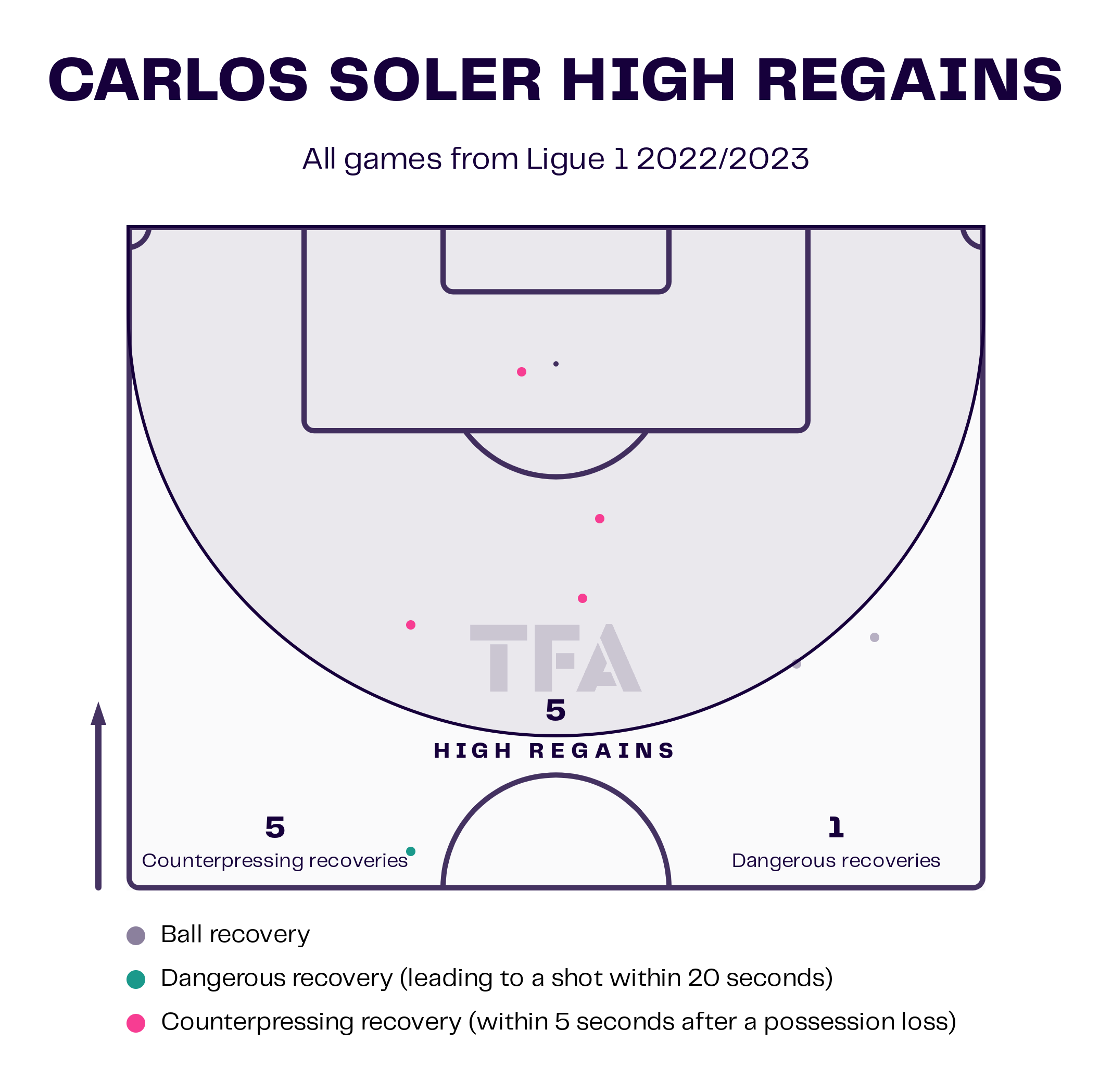 Soler makes a lot of movement in the opposition’s half in order to put high pressure on the opposition’s midfield and final third. The above viz represents various high regains made by Soler for PSG in the 2022–23 season. It can be seen that he has made five high regains, five counter-pressing recoveries, and one dangerous recovery. PSG does not tend to lose much of the ball, and Soler has very little playing time under his belt; hence, given more chances, the overall numbers are most likely to go up. 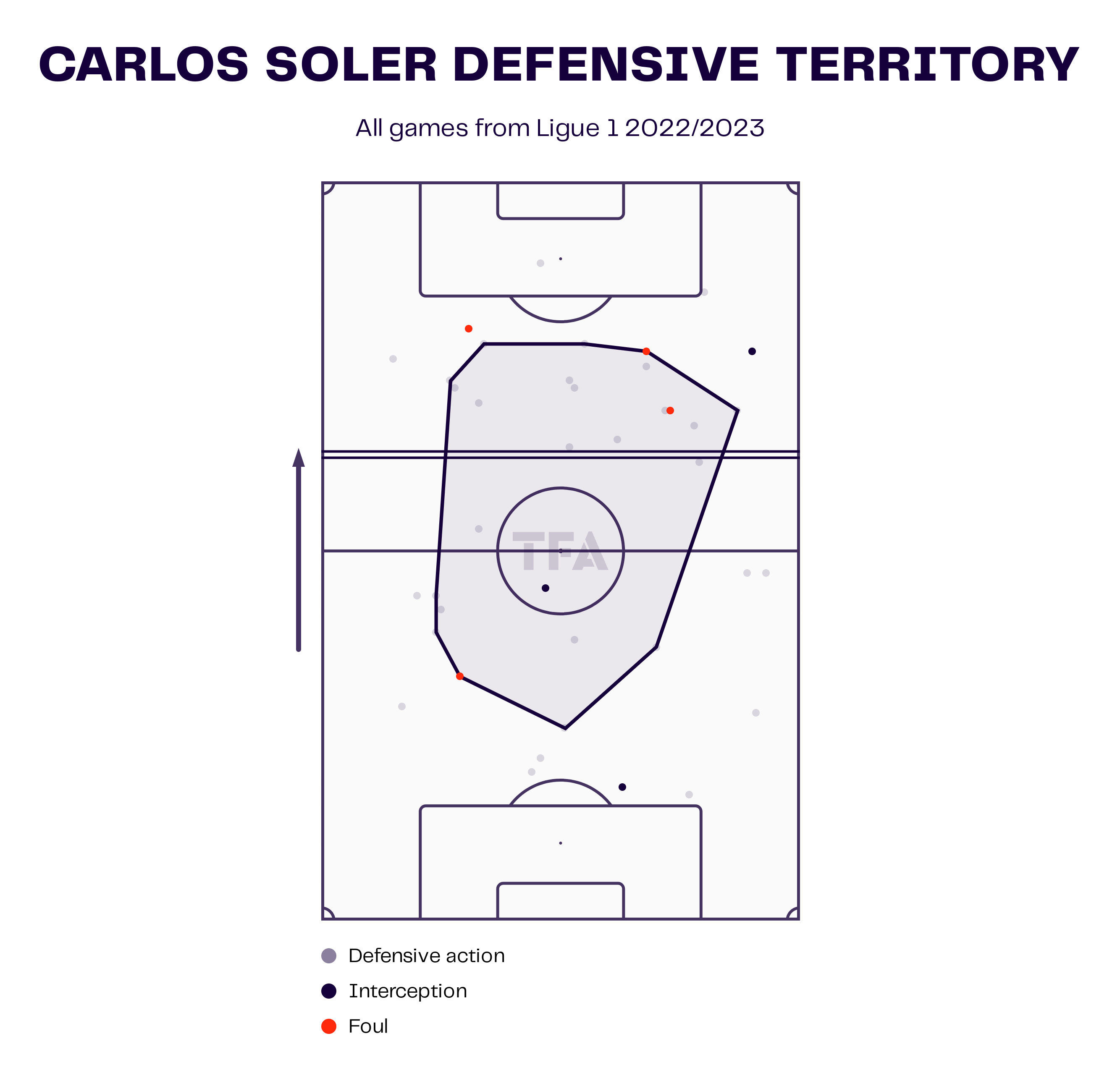 PSG play with an extremely high backline; they tend to put pressure close to the middle and final third. The above viz shows the defensive territory of the player. It indicates that Soler is involved in a lot of defensive actions in the middle third. Overall, he has an average of 15.67 duels per 90 and a 47% win rate for defensive duels. Carlos averages 2.07 interceptions per 90 minutes. The above viz is a comparison between Carlos Soler and Renato Sanches of PSG. Recently, Soler started against Auxerre and scored one goal and had one assist. Later on, he was replaced with Sanches, who also went on to score in the match. It can be observed that Soler performs better in defensive and aerial duels. Soler is also performing better in terms of goal contributions per 90, xG per 90, and shots per 90. Sanches is performing better in possession and passing stats as well as dribbles per 90.

All in all, Carlos Soler is a player with plenty of potential. He is another one of those players in the PSG squad who, if given the chance, can control the match and be a decisive player. It will be interesting to see if the PSG coach uses the player more often in the remaining half of the season. Looking at the stats it is evident that Soler is a player of high quality who means business while on the pitch for any team.

‘The new Kanté’ – Santamaría has been immense for Angers