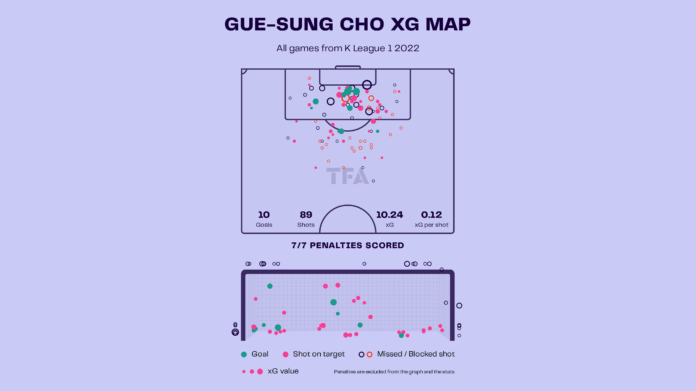 South Korea’s match against Ghana has produced some bright spots for struggling South Korea in the FIFA World Cup in Qatar. One of them is the rediscovery of Cho Gue-sung. He scored two goals against the Black Stars during his team’s 2-3 loss, marking the first time a Korean has ever scored more than once in a single World Cup match. The 24-year-old K-League player’s stellar performance in his first World Cup start appears to be drawing the attention of teams outside South Korea. One of the clubs impressed with Cho’s performance is Ligue-1 side Rennes. Currently, in the third position in Ligue 1 2022/23 standings, Renne’s are looking to achieve success by qualifying for the European stage. We now look at some of the stats that show why this French side have shown their interest in the young Korean. 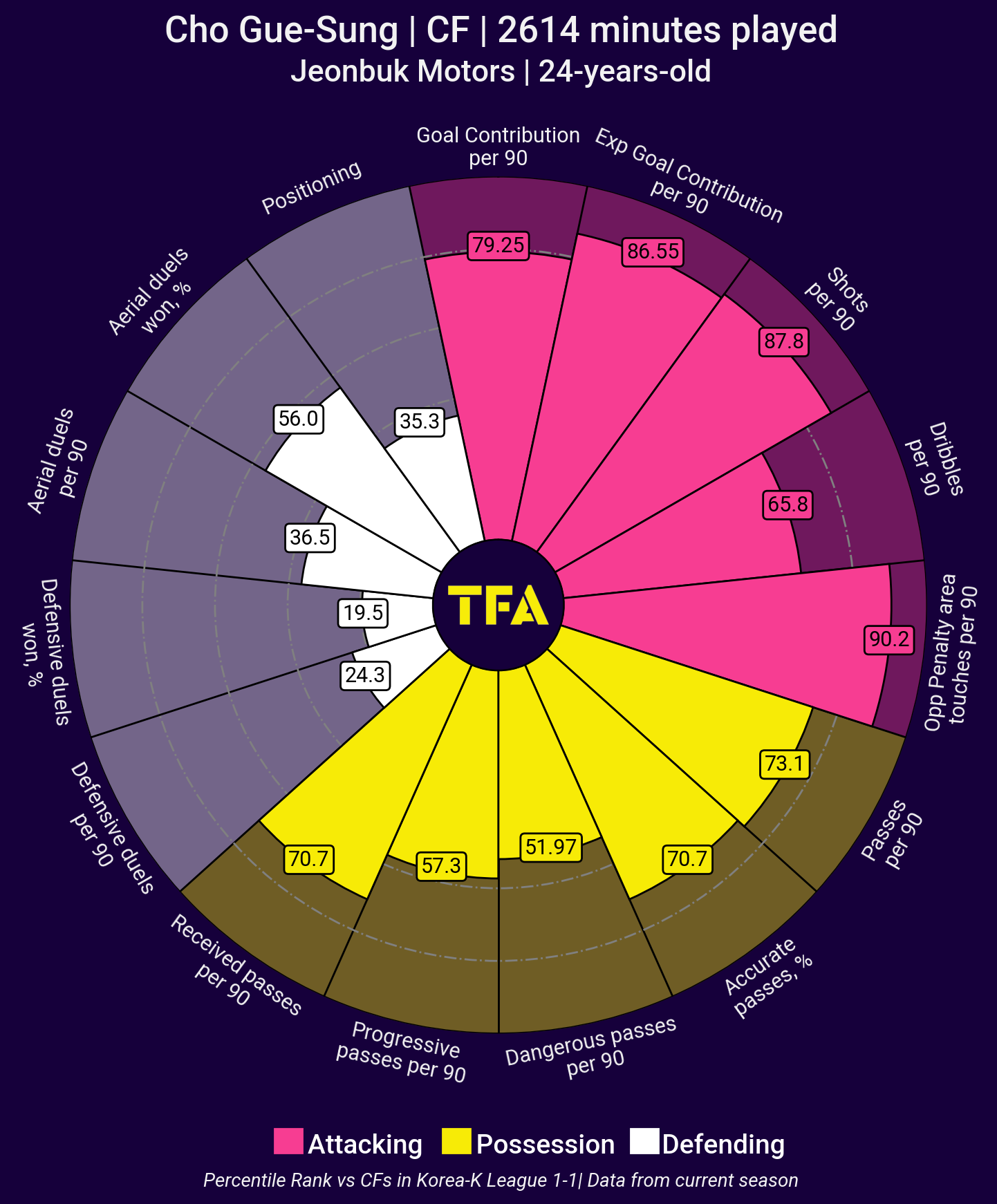 Cho has repeatedly demonstrated his presence on the field. His main position is at centre forward. He played a crucial role in Jeonbuk Hyundai Motors winning the K League championship and the Korean FA Cup in 2020. In 2022, he was named to the K-League Best XI and was the league’s top scorer. Cho has made 26 appearances in the K-League, scoring 14 goals and providing six assists. The above viz shows the stats of the player in comparison to the other players featured as centre forwards. It can be observed that Cho has dominated the attacking statistics. Cho is among the leading goal scorers in the Korean top division. He has a 90.2 percentile for touches in the opponent’s penalty area. He is also dominating the stats for shots per 90 and expected goal contribution per 90. 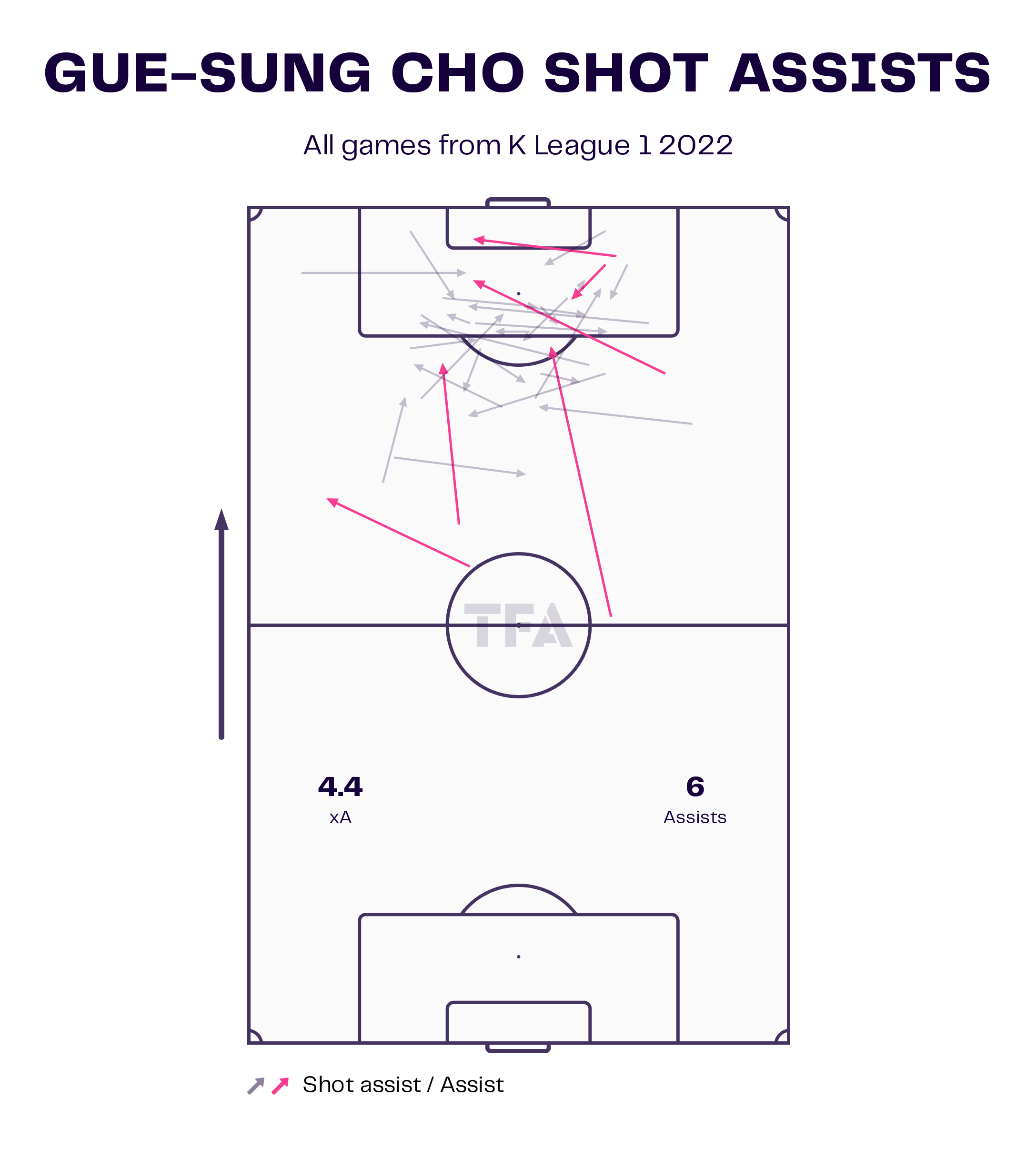 The above viz depicts Cho Gue-Sung’s shot assists and assists from all games in the K-League 2022 season. As a centre forward, Cho has been able to contribute centrally to the game, making much of the play towards the central area of the pitch. Cho is a right-foot dominant player, and the direction of his assists shows that he prefers to find half spaces near the left-wing areas. 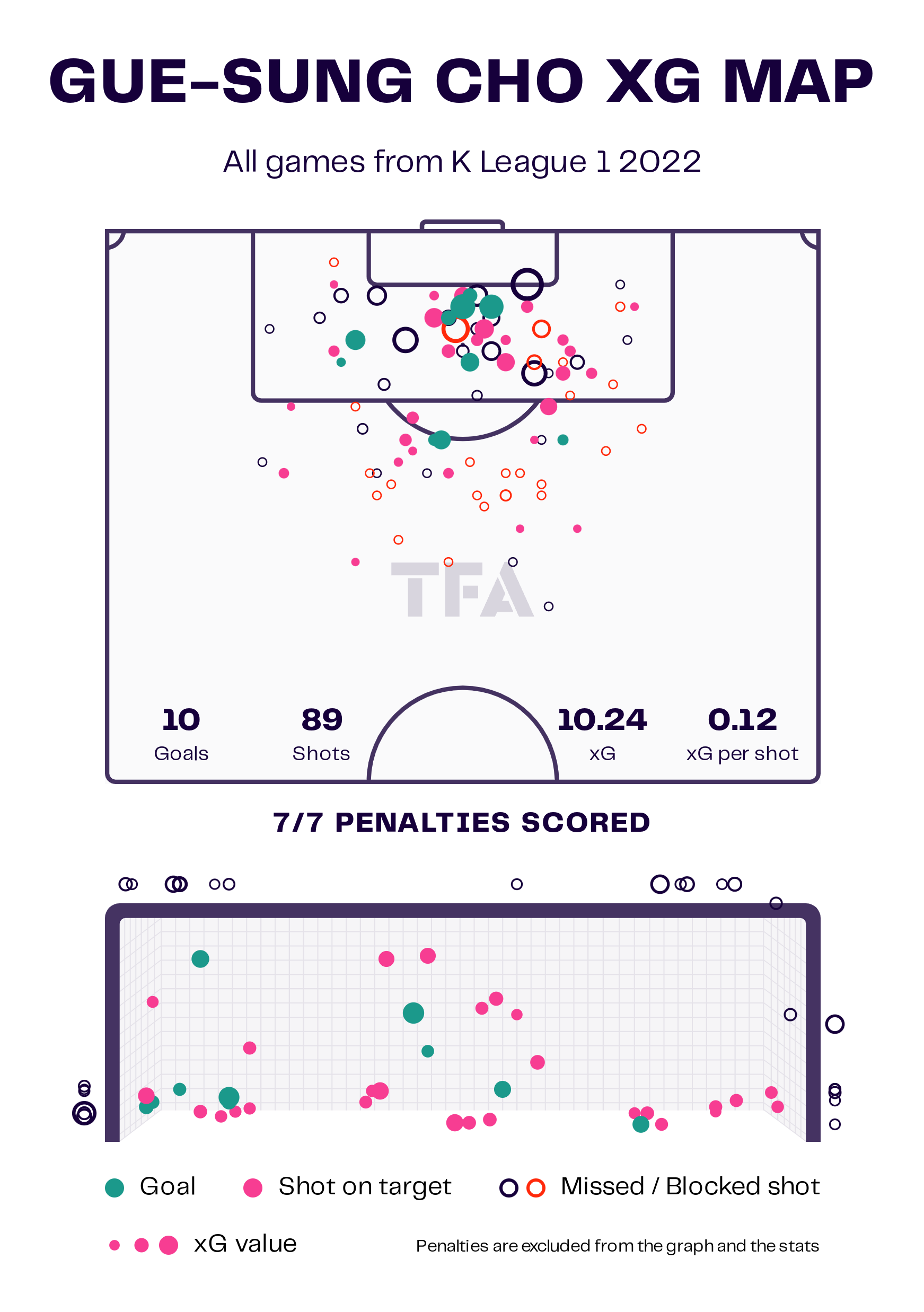 Cho has an xG of 10.24 for all games played in K-League 2022. Most of his goals came from inside the box. Cho has a knack for scoring goals and does not shy away from trying a shot from distance. Cho Gue-Sung has an xG of 0.54 per 90, the third highest in the K-League. Cho has not missed at all from the spot, scoring seven out of seven. Cho has 0.59 goals per 90 minutes, which is the fourth highest in the K-league. It can also be observed that Cho has attempted many shots on target from outside the box. 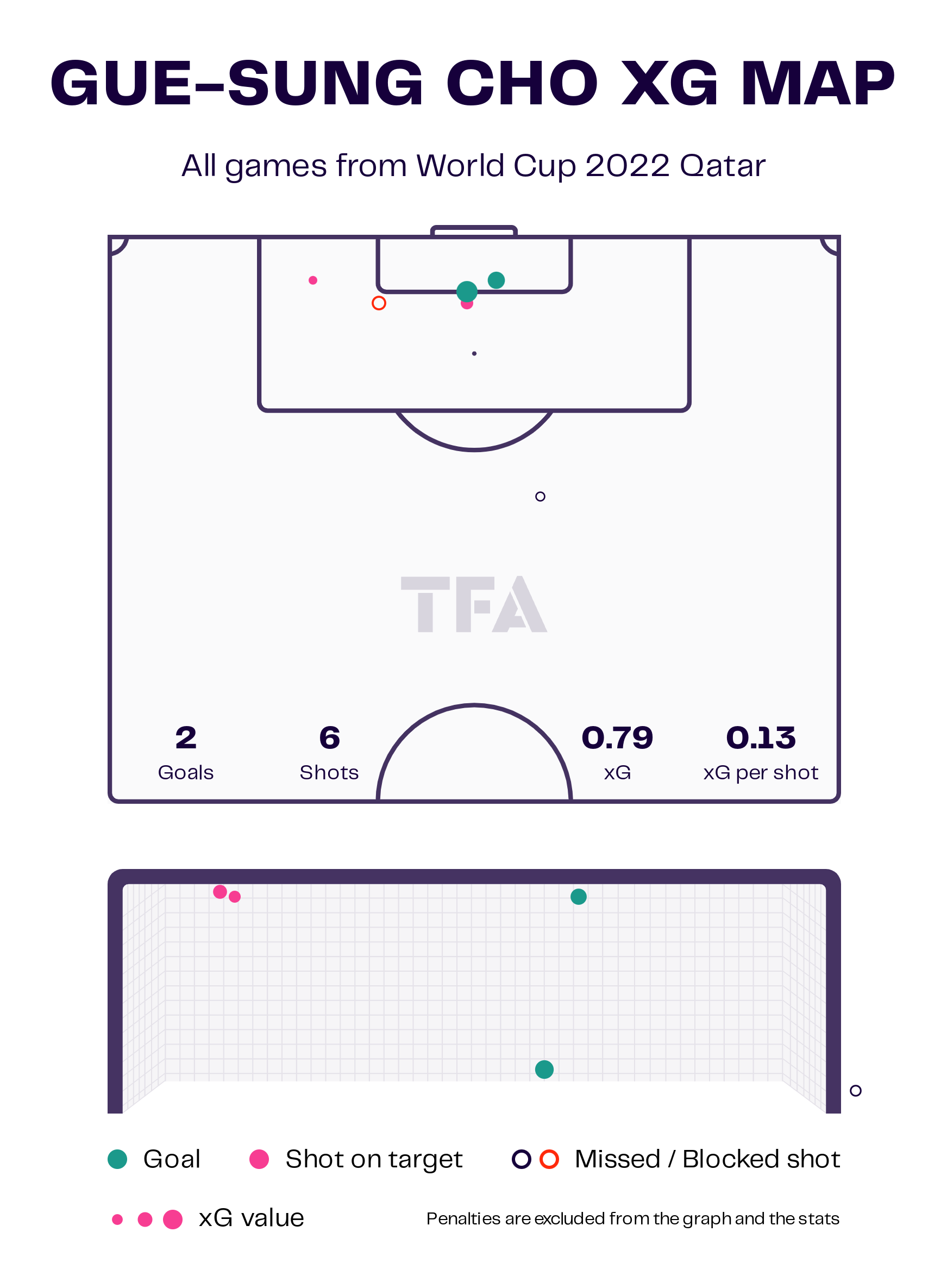 In the Qatar World Cup 2022, Cho Gue-Sung played three matches (plus one as a sub). They have five shots on target from a total of six and have scored two goals (0.79xG). Cho Gue-Sung averages 16 passes per match with a pass completion rate of 66%. He has one missed shot and one blocked shot. For the amount of pressure on a nation and player in a World Cup, Cho Gue-Sung’s Qatar stats are impressive enough to attract a lot of European attention.

Ball retrieval up the field 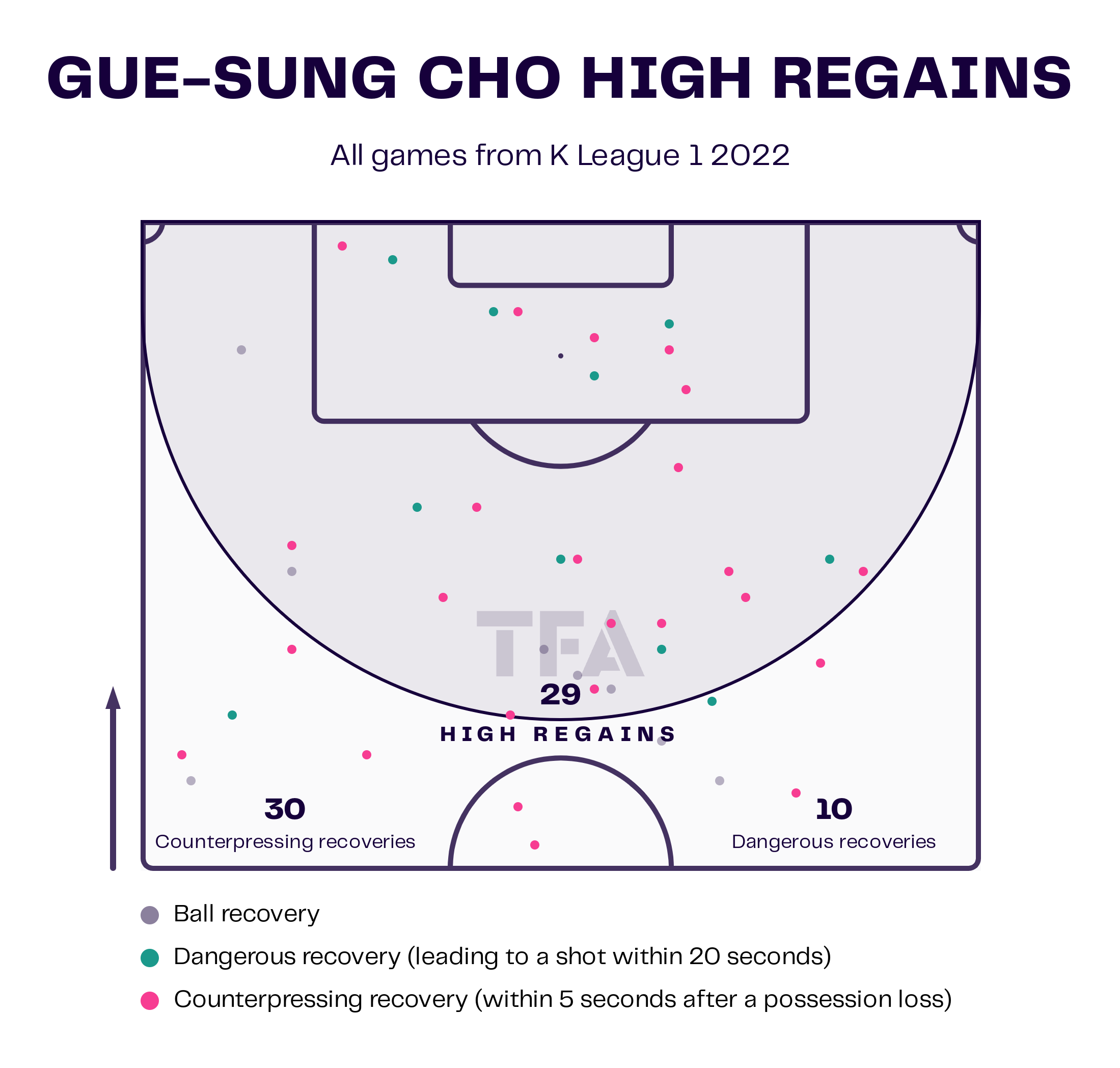 The recovery of the ball in dangerous areas adds another threat up the pitch. Cho Gue-Sung has made a total of 29 high regains. Ten of these have come into the opponent’s box. Out of these ten, four have been dangerous recoveries leading to a shot within 20 seconds. An overall total of ten dangerous ball recoveries have been made by Cho in the opponent’s half, leading to a shot within 20 seconds of the recovery. This attribute of Cho can come in handy for Rennes, especially in Ligue 1, owing to the fast-paced nature of football being played in Ligue 1. Another important stat is the counter-pressing recoveries made by Cho, which is an indicator of his hunger for possession of the ball. 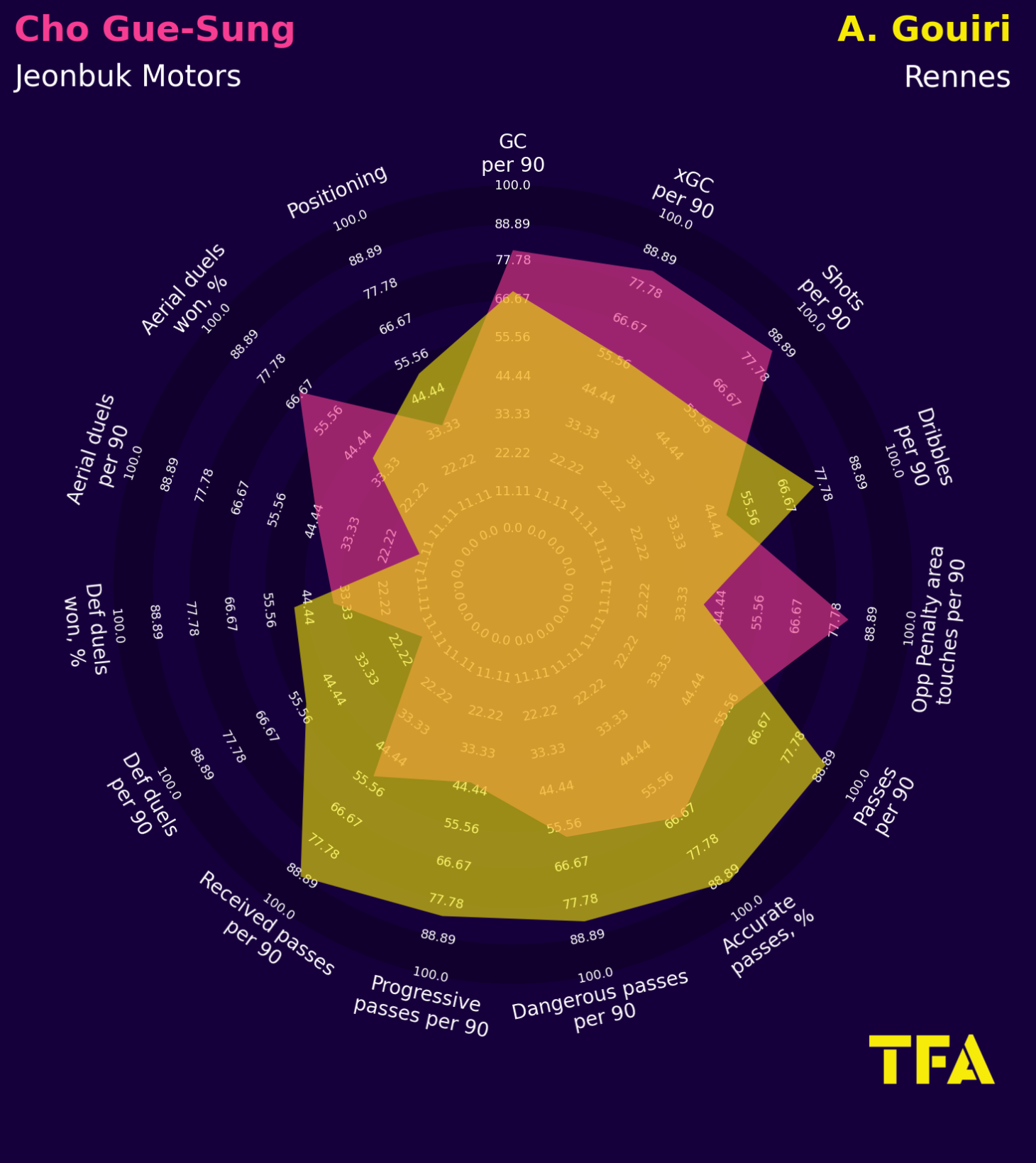 Amine Gouiri is a striker for French Ligue 1 club Rennes. Amine Gouiri joined Rennes in September 2022. In the 2022–23 French Ligue 1, Amine Gouiri has played 13 matches. They have 13 shots on target from a total of 23 and have scored 5 goals. Amine Gouiri averages 22 passes per game with an 81% completion rate and 1 assist. The above viz is a comparison between Cho Gue-Sung and Amine Gouiri. It can be observed that the Korean is ahead of the Frenchman in terms of expected goals and goals per 90. Cho is also ahead of Gouiri in shots taken per 90, touches in the opponents’ penalty area per 90, and percentage of aerial duels won. Gouiri, on the other hand, has received more passes per 90 and made more progressive and dangerous passes per 90.

Rennes have been at the top of their game this season, and adding more firepower might just help them gain European glory. Cho Gue-Sung’s impressive World Cup performance has just been seen by the whole world. Rennes, a French club, appears to be hopeful of receiving some assistance from the Koreans. It is evident from the analysis that Cho Gue-Sung is potentially a key player for any team he plays for, may it be in the K-League or the Korean national team.