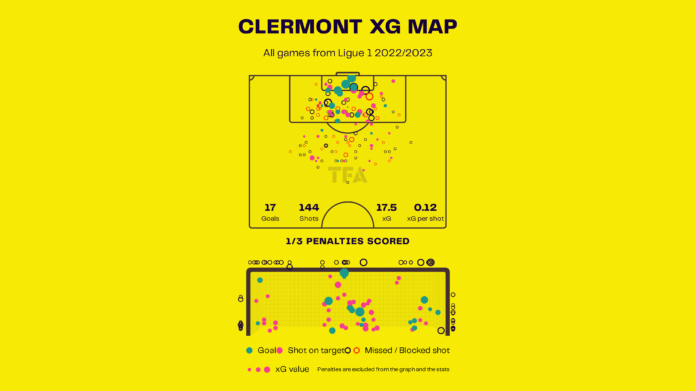 Clermont are currently in 9th position in Ligue 1 2022/23, with 22 points from 17 matches played. They have won six matches, drawn four, and lost seven. They were winless in their last six league encounters, and Pascal Gastien’s men failed to score in a domestic fixture since defeating Auxerre 2-1 in early October. Clermont returned to winning ways recently, defeating Lyon 1-0. Despite their struggles, they have put themselves in a decent position to remain in the top flight for another campaign, currently nine points above the relegation line. The Lancers will try to avoid dropping near the relegation zone by trying to increase their overall goal difference. Having scored 20 and conceded 25 so far this season, it is the only way to rack up points on the board. Below is an analysis of various stats for Clermont in Ligue 1 this season. 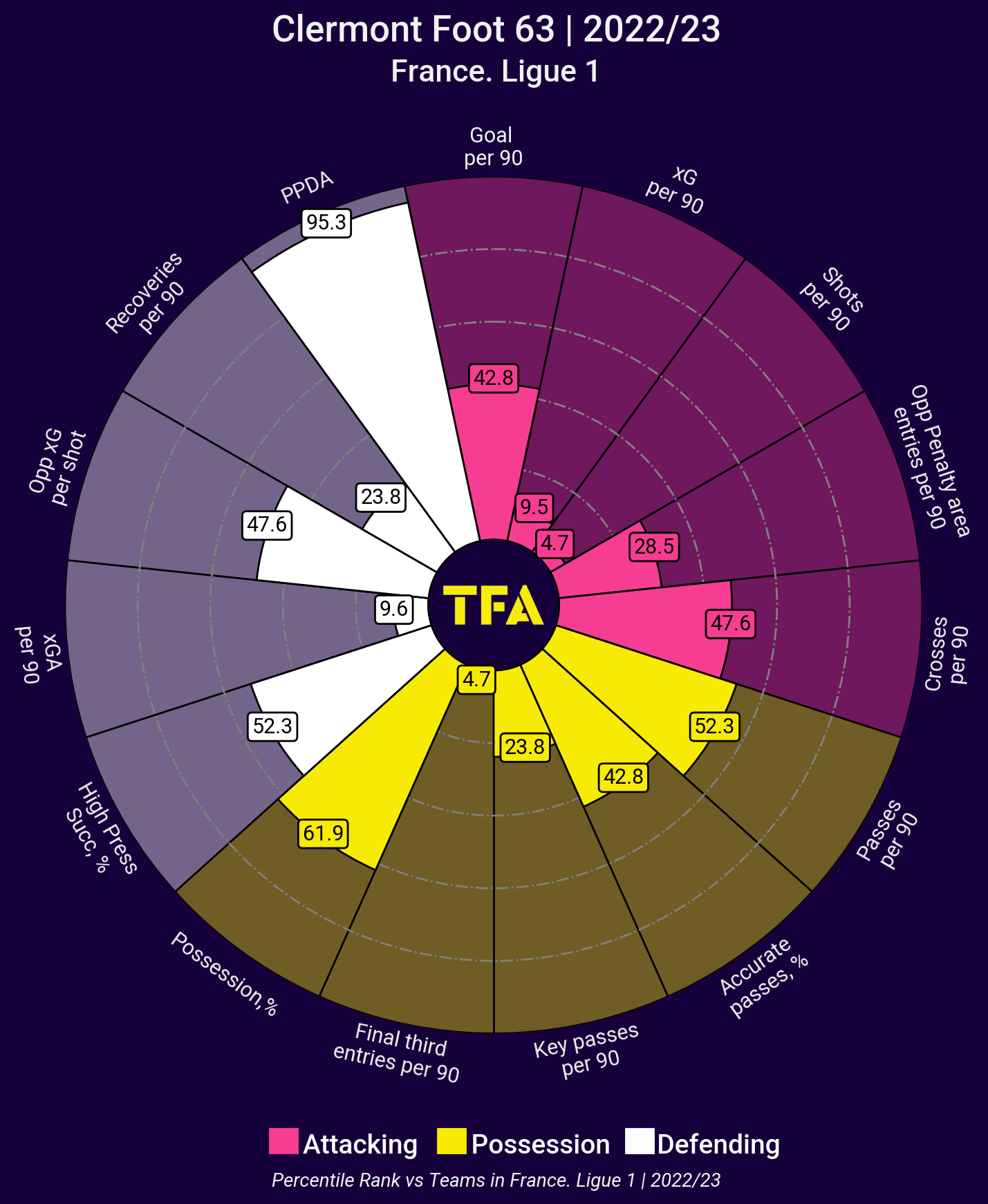 The above viz shows the percentile rank of the team in attacking, defensive, and possession stats compared to other teams in Ligue 1. One of the major highlights is that Clermont is among the top 95.3 percentile for PPDA (pass per defensive action). They have a PPDA of 5.8, which indicates their intent to win the ball back as soon as possible after losing possession. They rank poorly in all other departments and are facing some tough times in terms of xG and shots per 90 minutes. 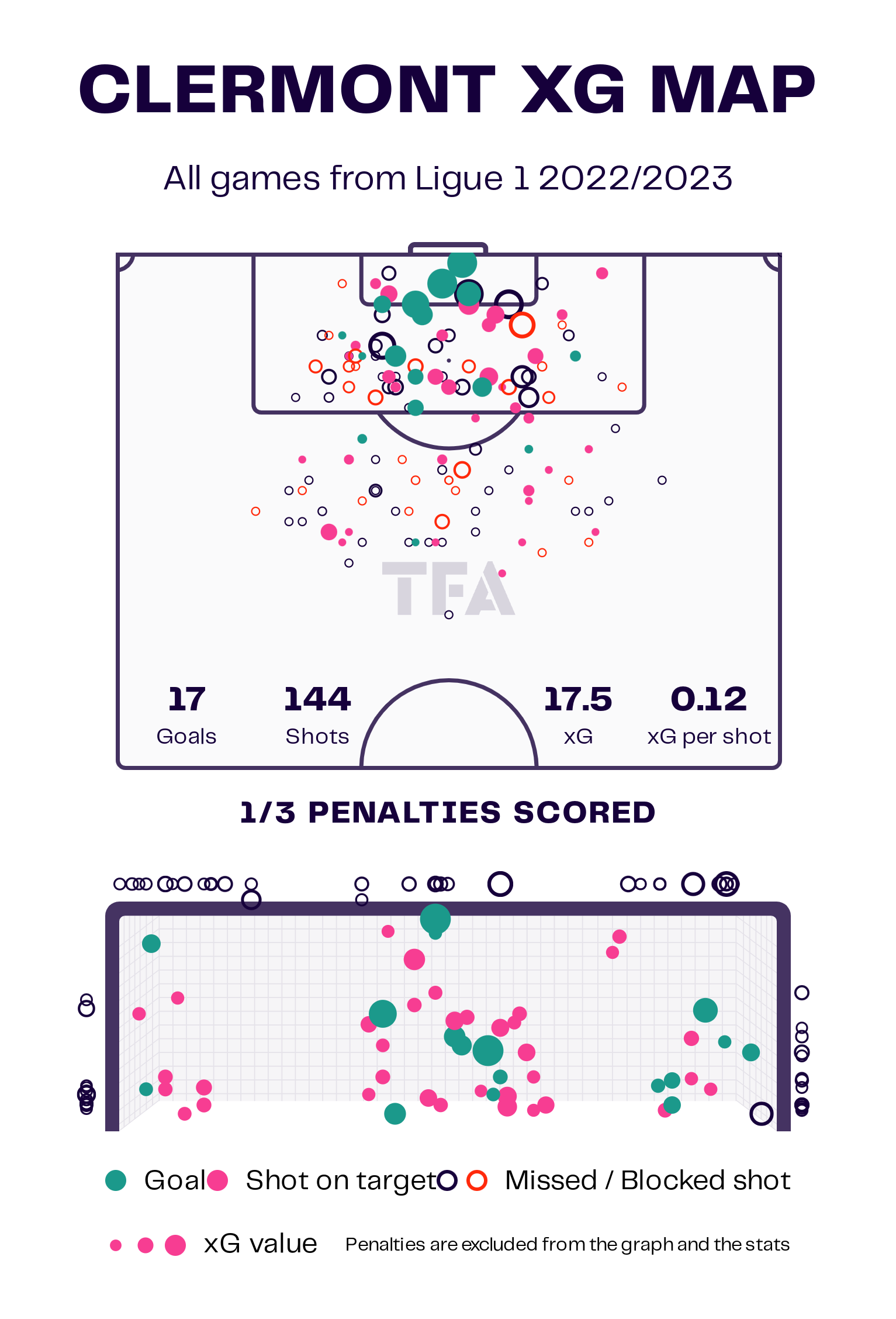 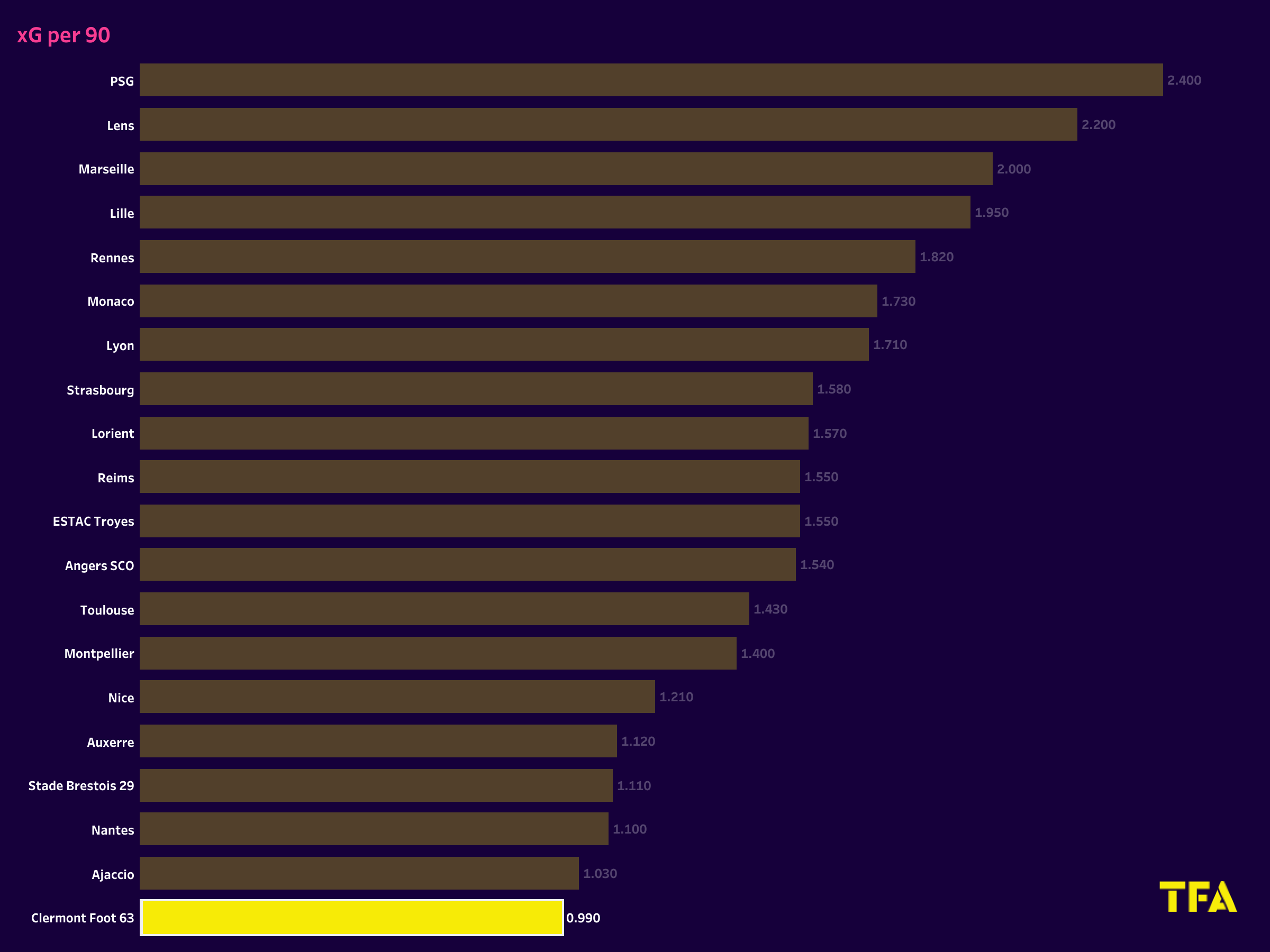 Clermont have scored 20 goals with an average of 1.40 goals per match. They create 24.5 positional attacks and 1.56 counterattacks on average per match. The above viz shows the shot map of the team in the current season. It can be observed that the Lancers have scored most of their goals from just around the 6-yard box. They have the lowest xG per 90 in Ligue 1, which is below one. 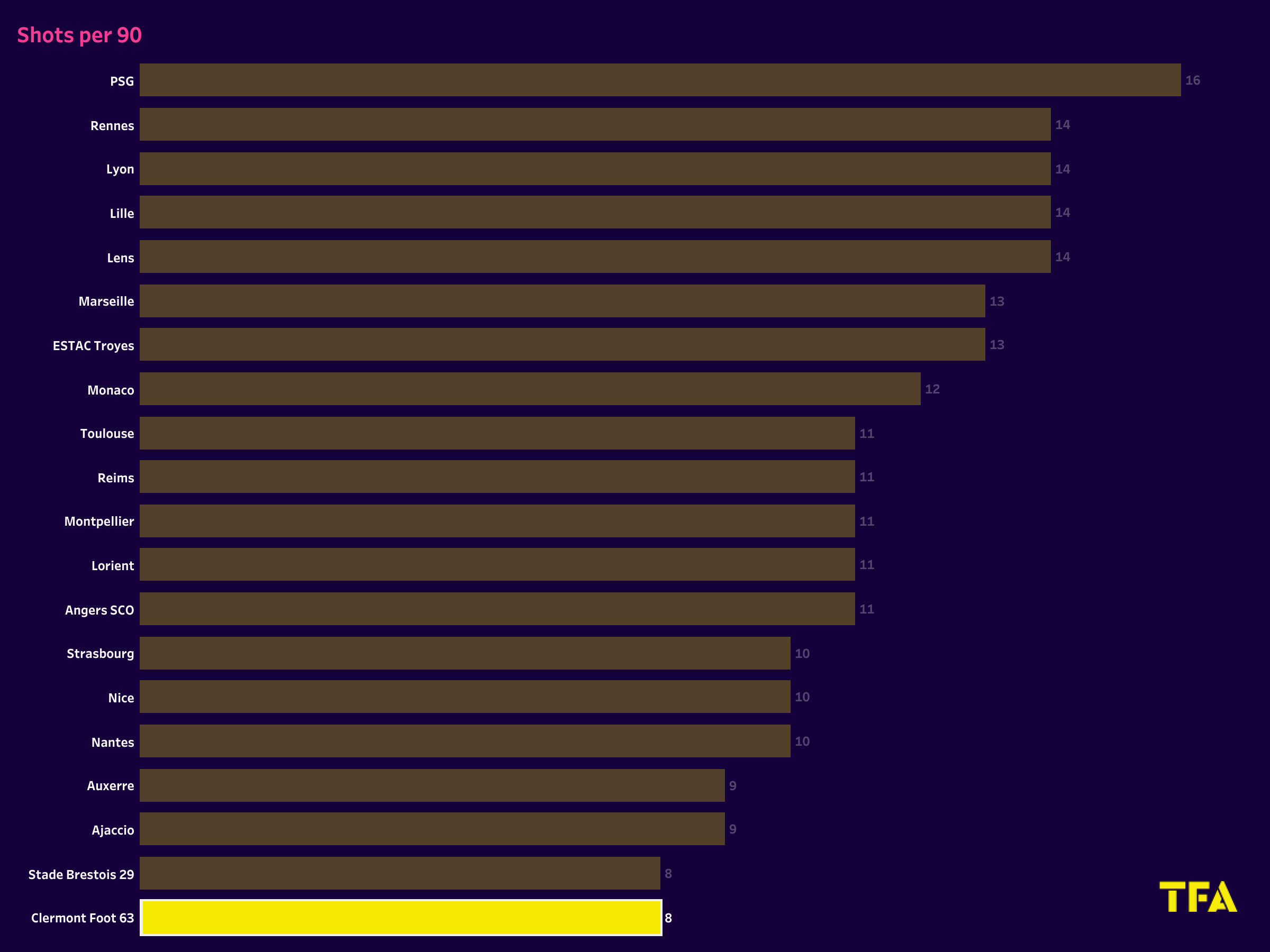 One of the main areas the team can improve in is attempting more shots and creating more chances. Clermont are ranked lowest for shots per 90 minutes. They completed only 22% of positional attacks with shots and only 24% of their counterattacks end with a shot attempt on goal. With a shot accuracy of 37.4% per 90 minutes, the team is lacking in this area and it has been a tough time in attack for Clermont this season so far.

Dribble all the way 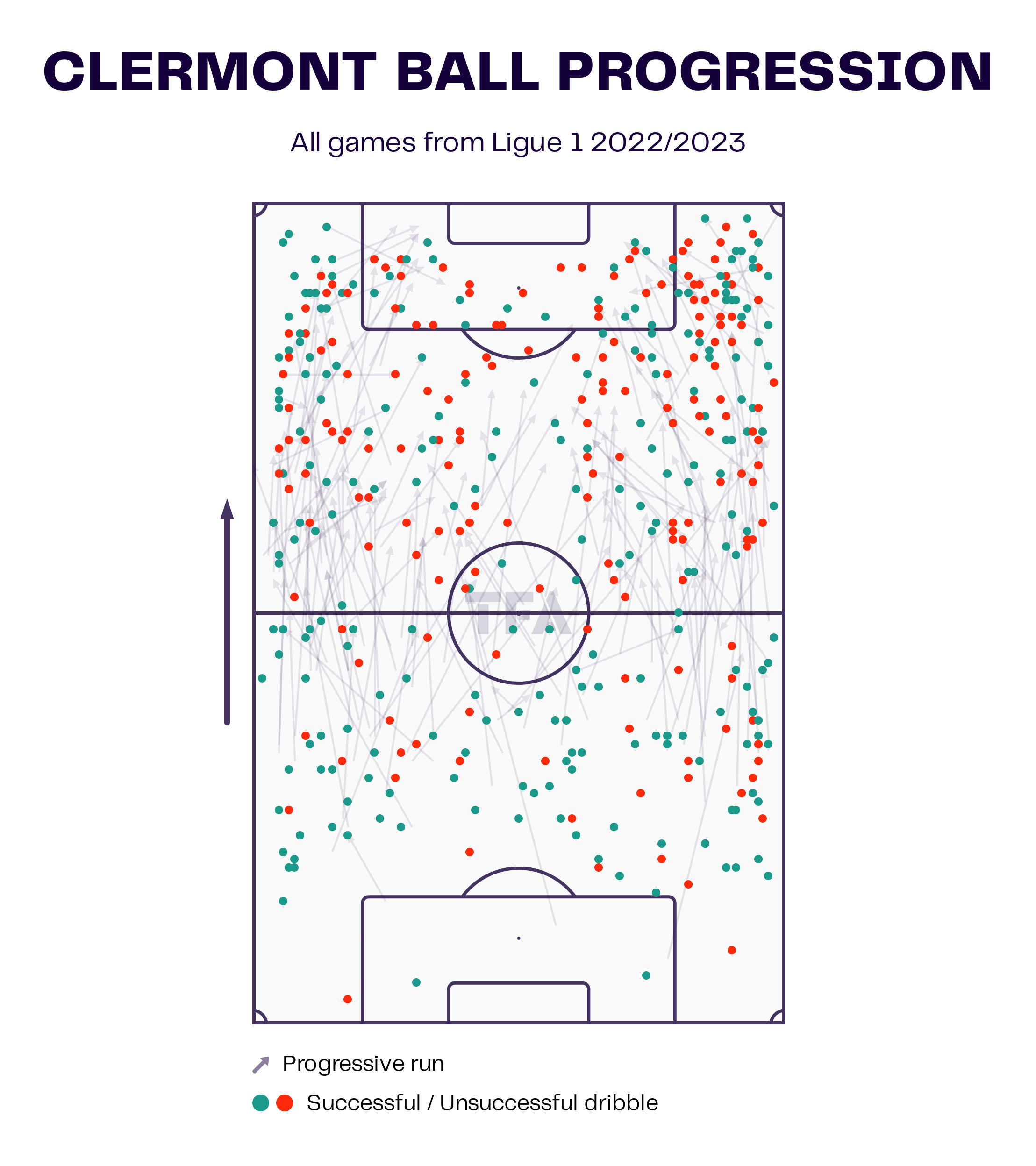 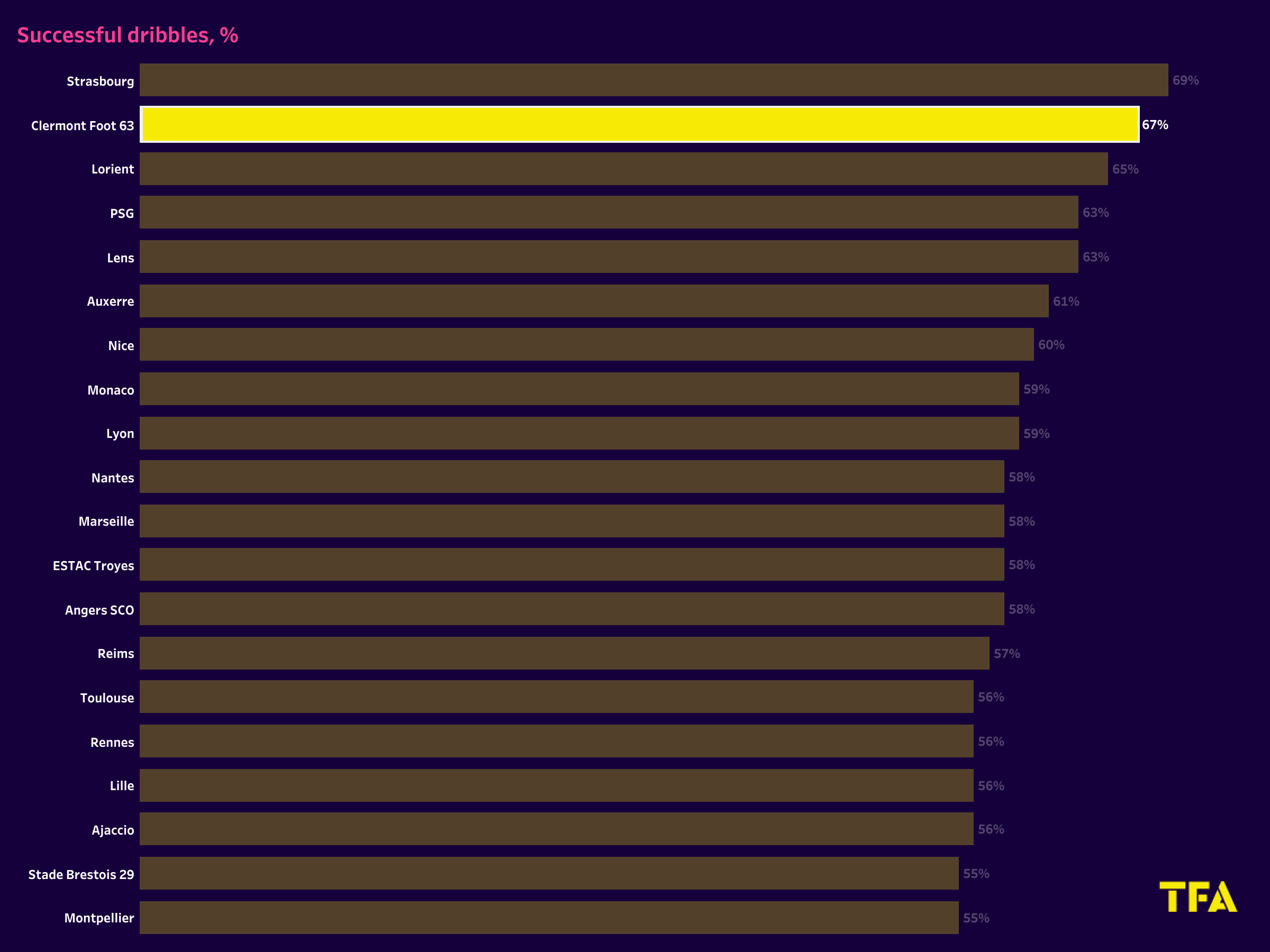 The above viz is a representation of ball progression made by the team in the current season. It can be observed that Clermont uses much of the central attacking line, making 21 attacks, and also tends to move up the pitch by using wider areas. They also heavily depend on dribbling into the box in order to generate an attacking threat. Clermont attempts 25 dribbles per 90 minutes and has a success rate of 67 percent for attempted dribbles in Ligue 1, which is the second-highest in the league. This is an indication of the potential that the team can exploit in the remainder of the season in order to try and achieve more success. 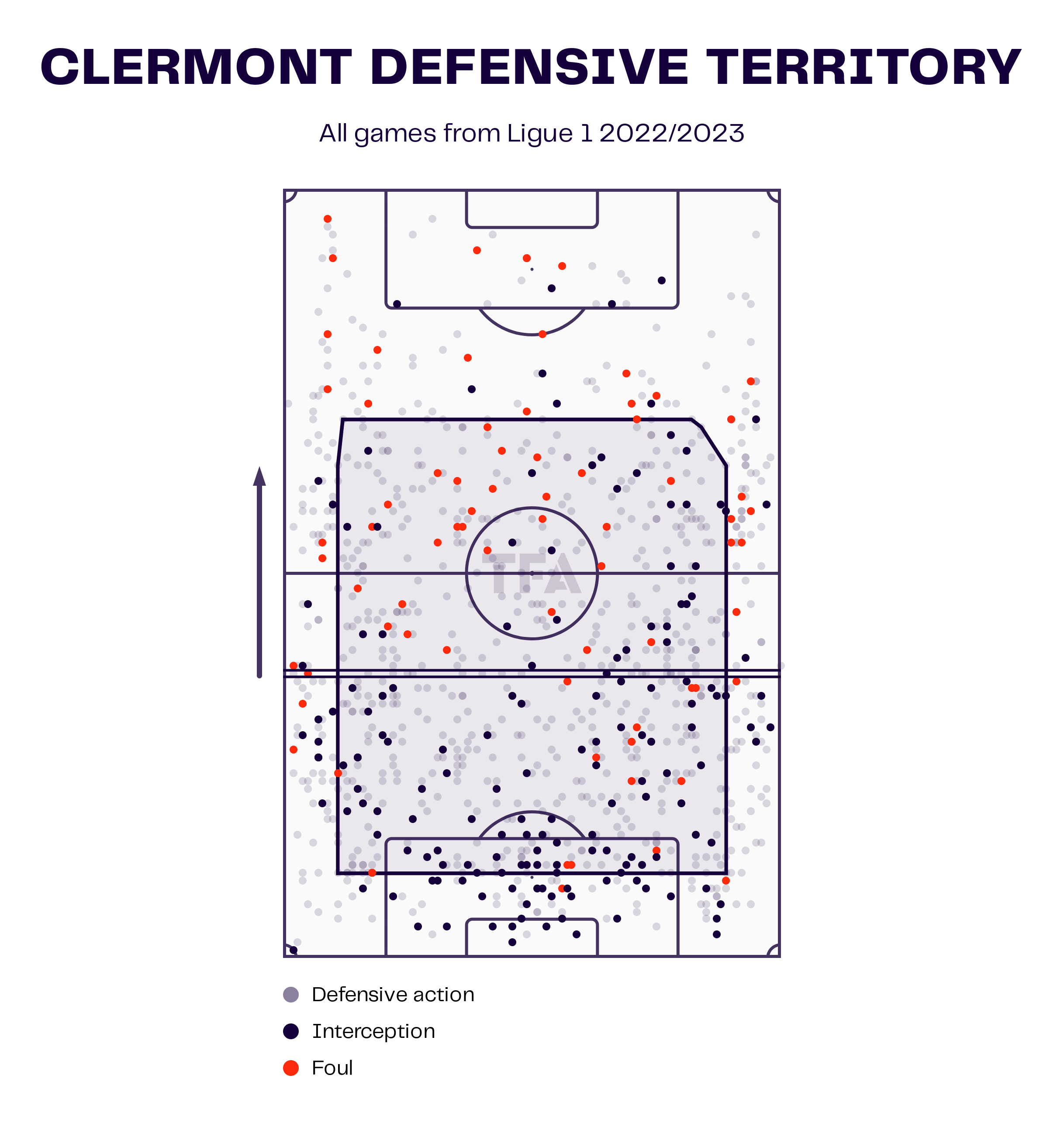 The above viz shows the defensive territory of the team. It indicates that Clermont are involved in a lot of defensive actions in the defensive third, and the team makes 43.75 interceptions per 90. They have committed numerous fouls in their half, including a few in the box, and make 10.44 fouls on average. Clermont have also made many fouls in the opponent’s box. The team makes 78.94 recoveries and attempts 201.88 duels on average with a win rate of 50.1 per cent. These stats definitely make the team’s defensive intentions clear, which is to maintain high pressure.

It has been a tough season for Clermont, even though they have the overall ability to finish more matches in the league. They do not face any immediate threat in terms of relegation, but would surely love to push for a European spot at the end of the season.

Under the microscope: How the former World Cup winner has settled...

PSG vs Strasbourg Preview: Shots per 90, efficiency in attacks and...

Transfer Analysis: What Joao Felix could bring to a high-scoring PSG...