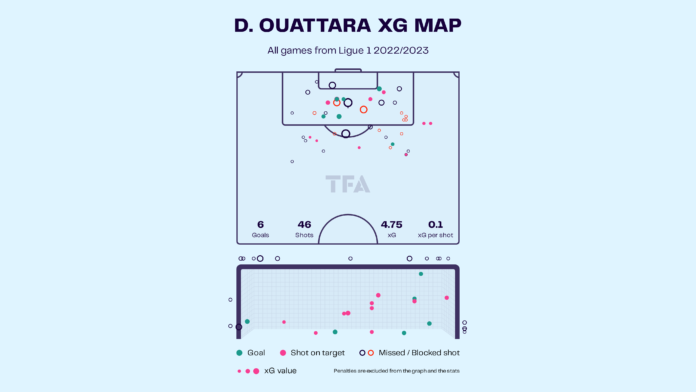 Dango Ouattara is a professional footballer who plays as a forward for Ligue 1 club Lorient. He has scored six goals in 19 matches so far in the Ligue 1 2022-2023 season. Additionally, he has provided six assists for his team so far this season. His contributions in front of the goal have been crucial for Lorient, as he has helped his team through matches. Dango Ouattara seems to be the player who has helped Lorient reach seventh in Ligue 1 this season. Below are his stats from the current season in Ligue 1 for Monaco. 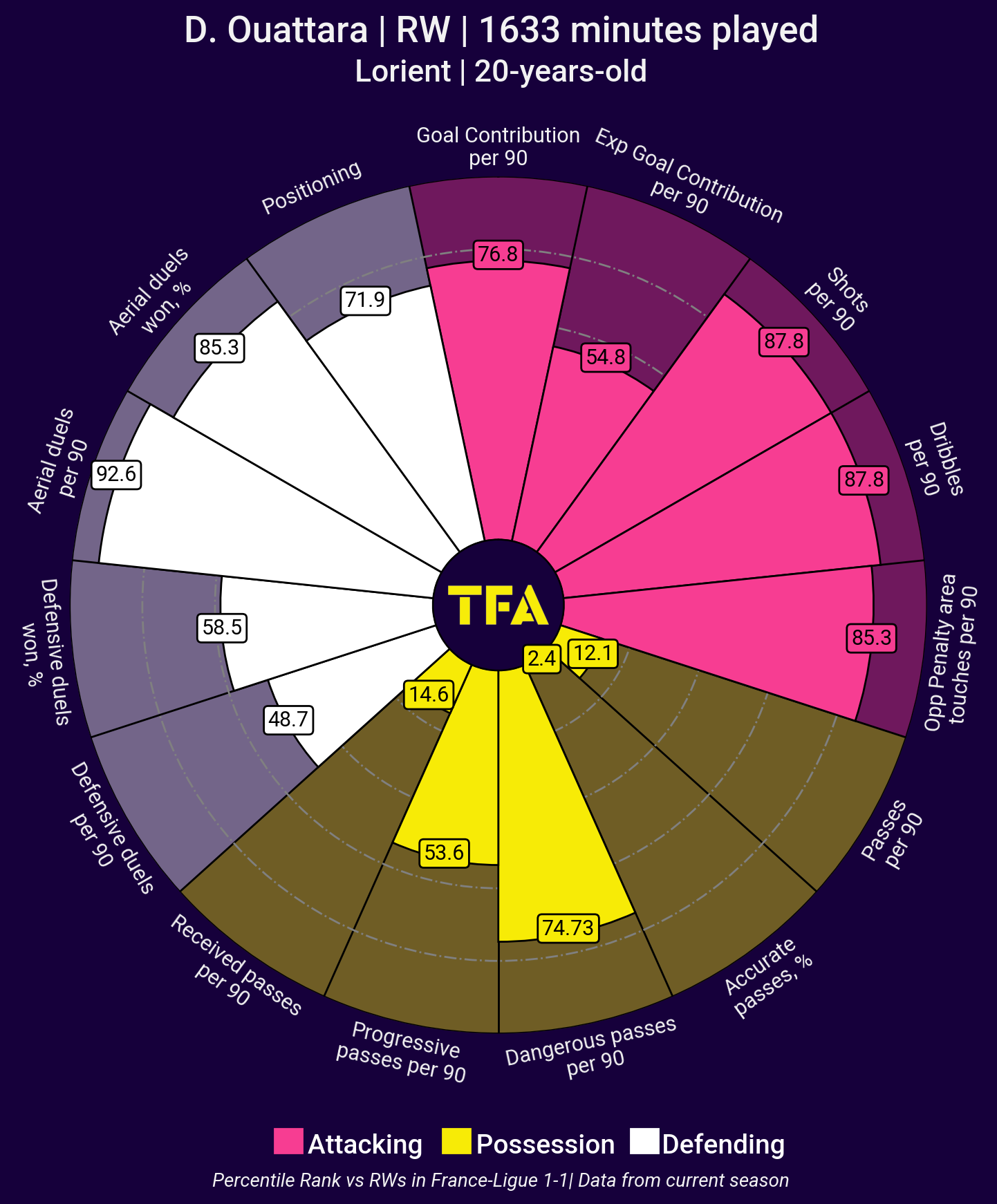 The above viz shows the percentile rank of the player in comparison to other players in Ligue 1. Dango is a threat in front of goal and ranks among the top for goal contributions, averaging 0.6 goals in the league. Overall, he ranks highly in expected goals per 90, shots, and touches in the opposition’s penalty area per 90, proving to be an extremely efficient resource for the team. 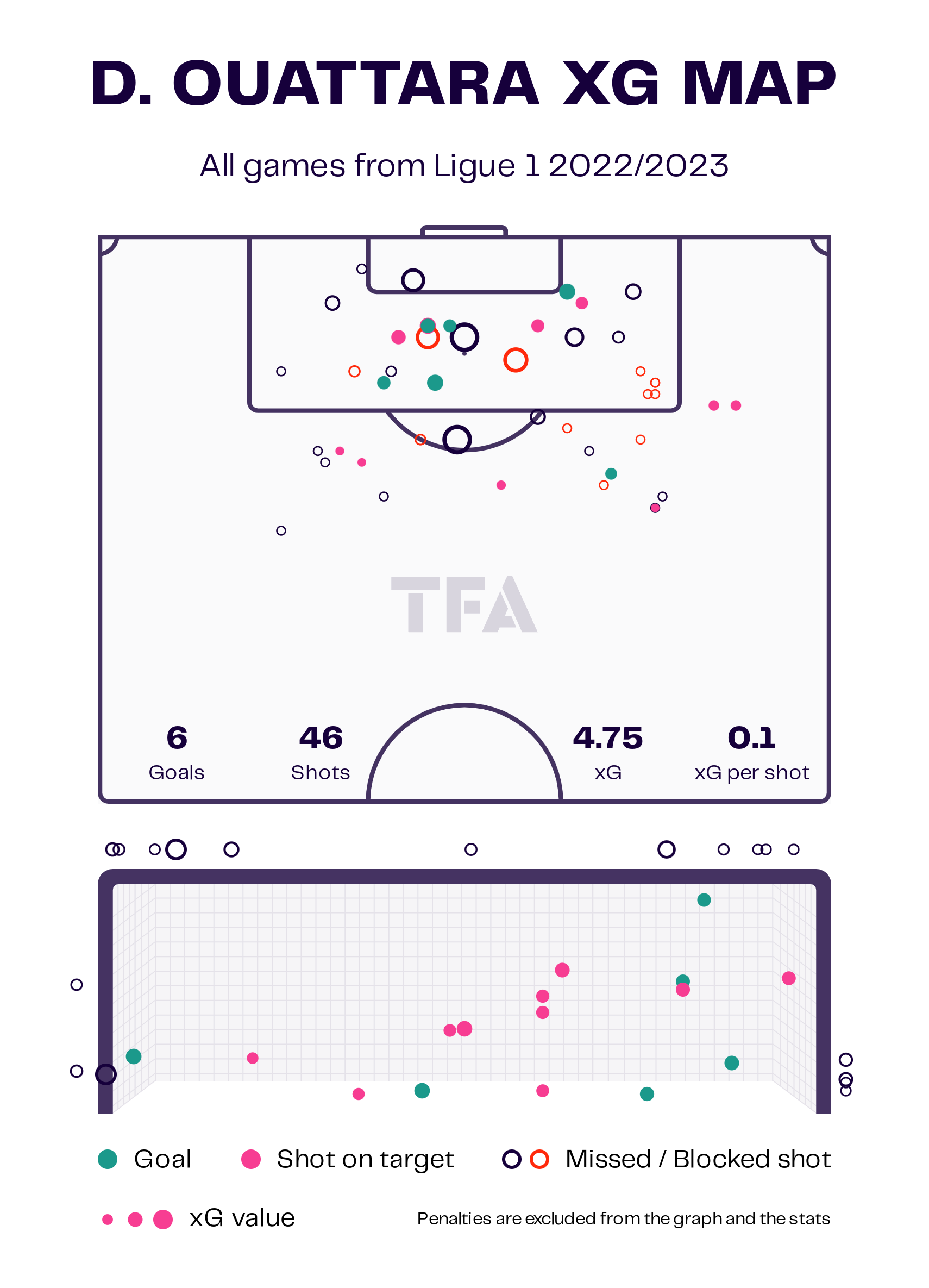 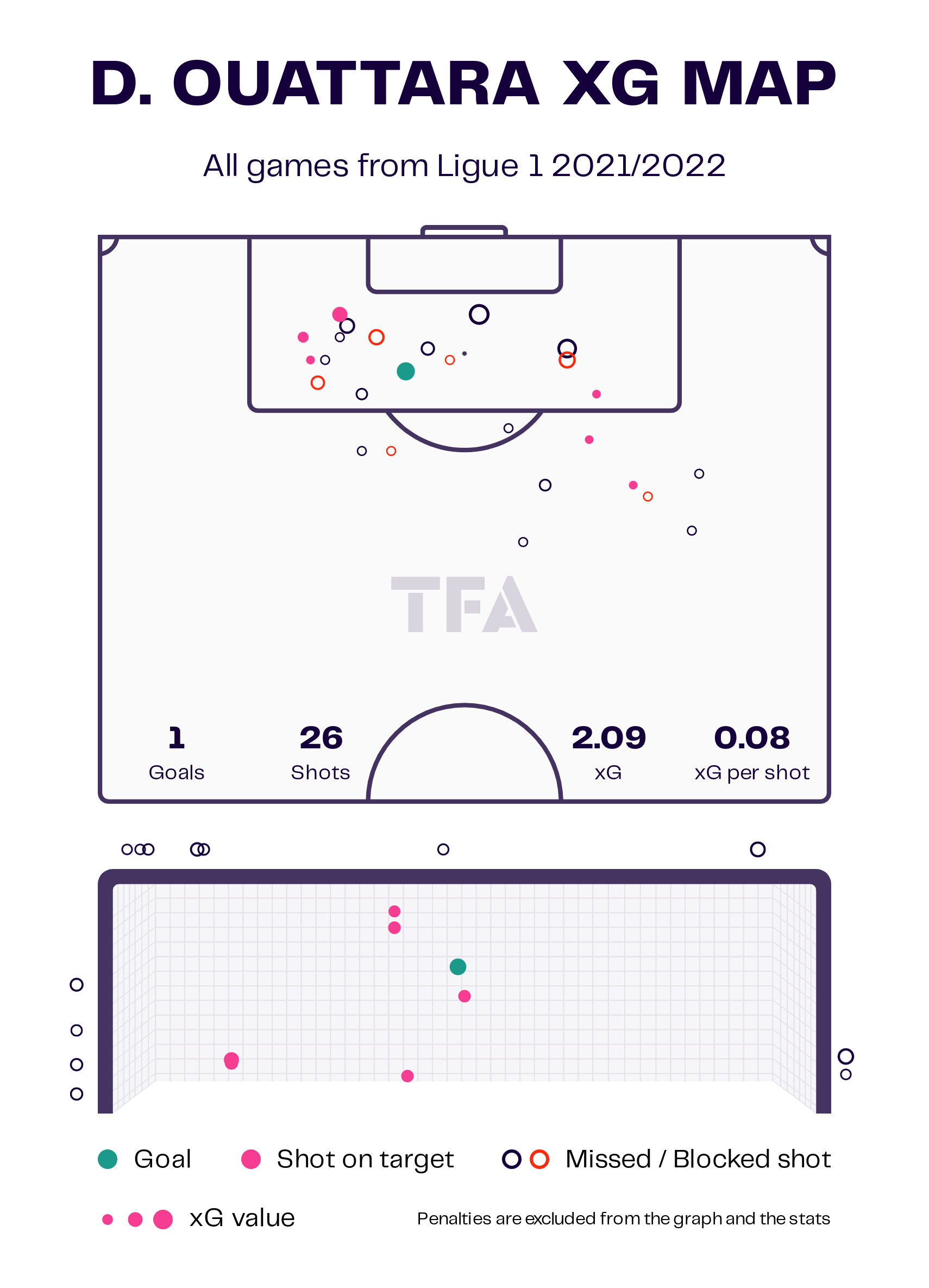 Dango is a crucial part of Lorient’s attack. In the 2022–23 French Ligue 1, Dango Ouattara played 18 matches. He has 17 shots on target from a total of 46 and has scored six goals (4.75 xG). Dango Ouattara averages 23 passes per game, has a 65% pass completion rate, and five assists. All of his goals have come from inside and around the six-yard box, along with a few attempts on goal from outside the box. He averages 2.54 shots per 90 minutes with 34.8% accuracy.

He has already shown much improvement from last season, when he scored one goal from 26 shots in all. He finished last season with an overall xG of 2.09 and an xG per shot of 0.08 per match. His improvement in terms of attack has been significant, and he has contributed much more than goals to his team this season. 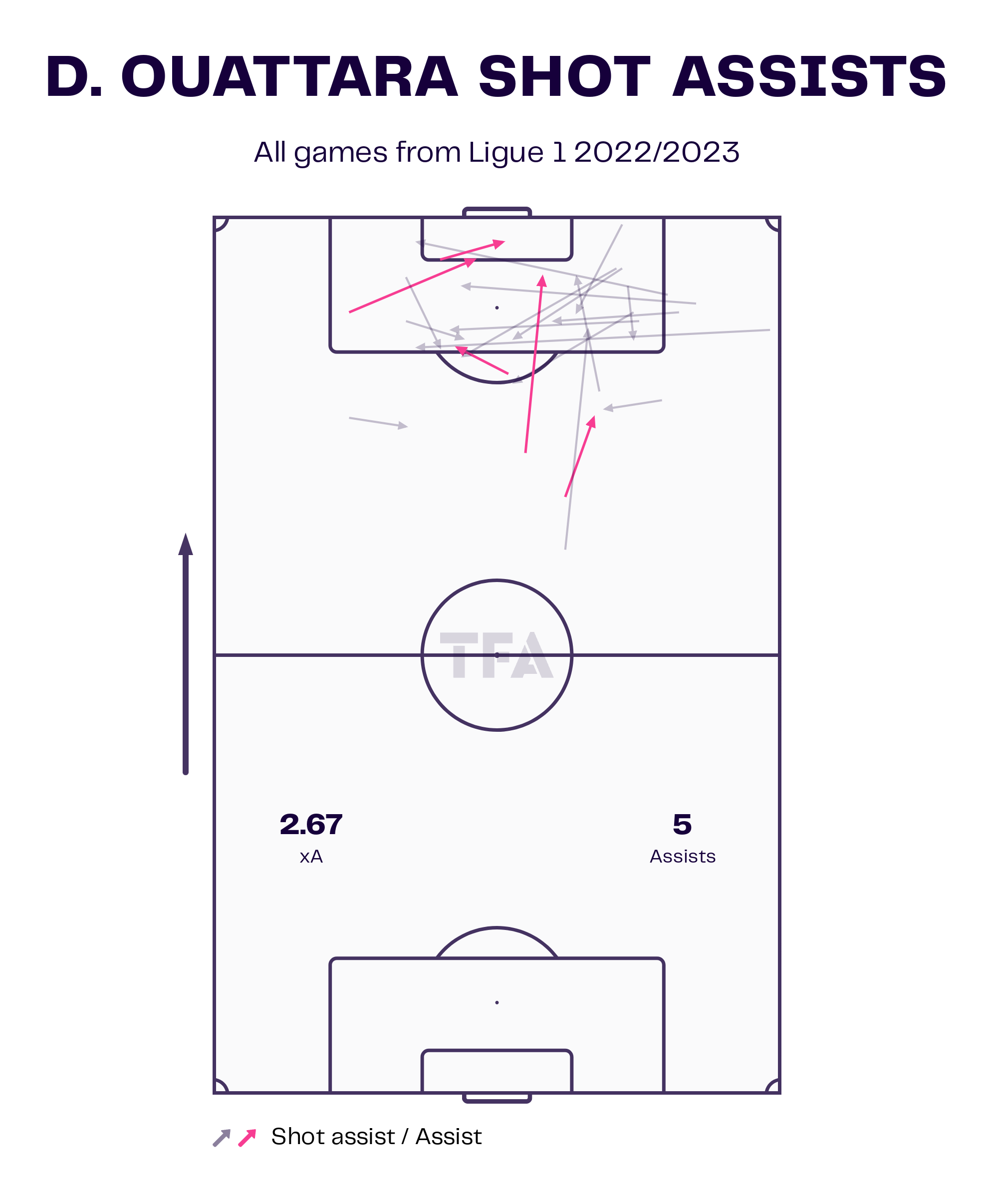 The above viz is a representation of shot assists for Dango Ouattara with five assists, he has an xA of 0.15 for the matches played. He averages 0.28 assists in the current season and makes 0.06 second assists per 90. Most of the actions have been taken inside the box, with some in the final third. He makes 1.8 passes into the final third per 90 with an accuracy rate of 45.5%. He averages 2.59 passes into the penalty area with a pass accuracy of 59.6%. 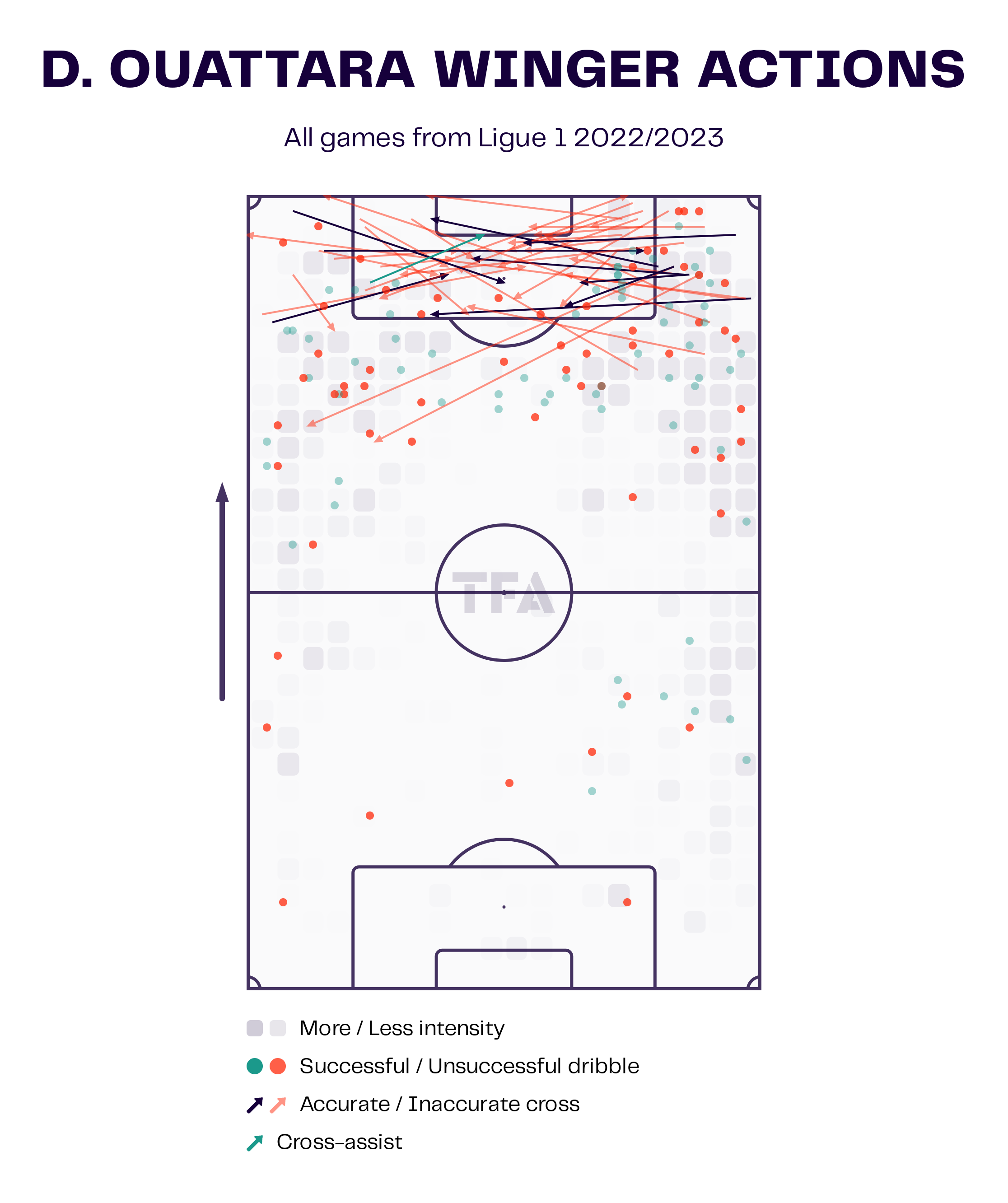 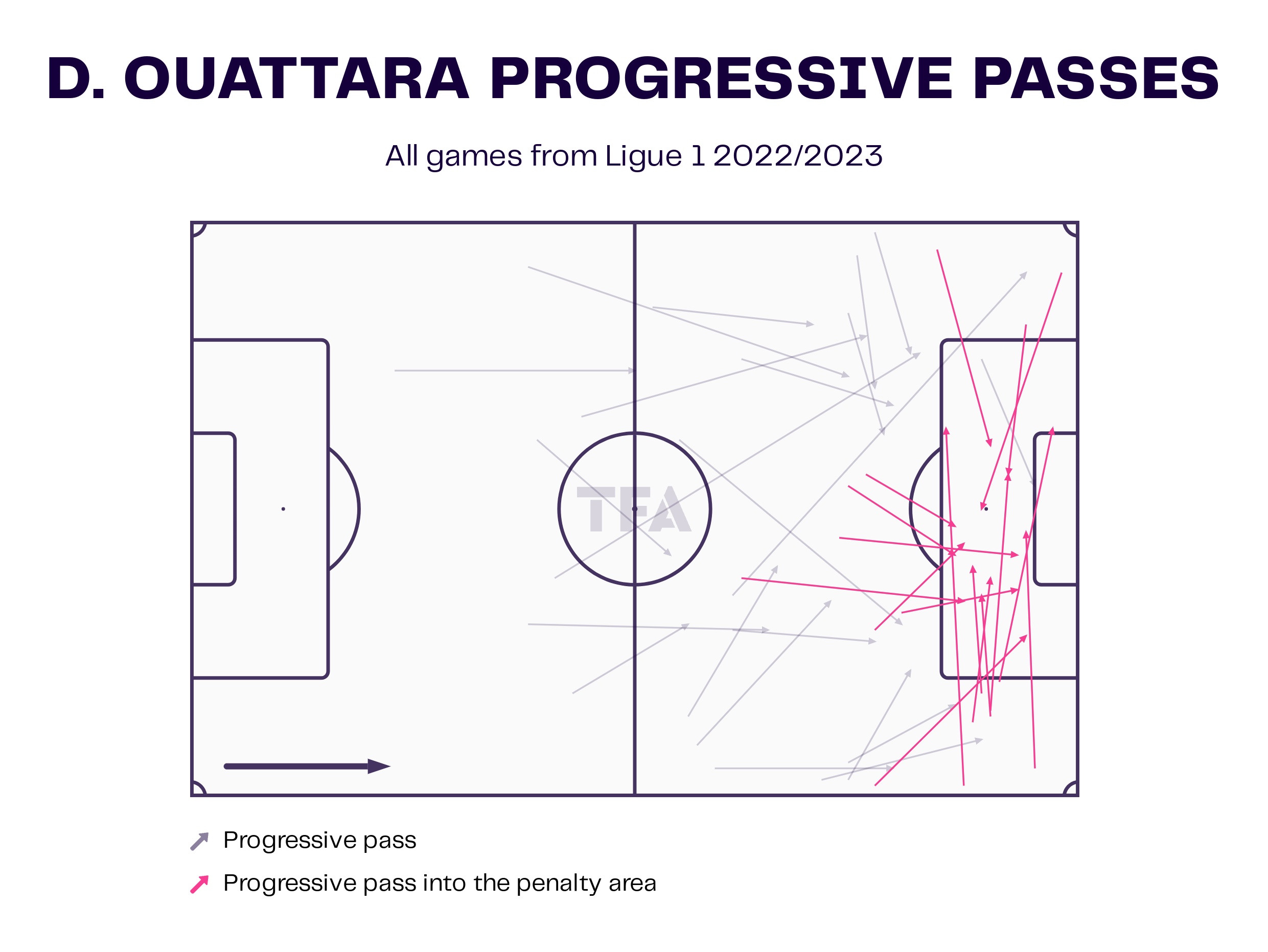 Dango is an instrumental player for Lorient and has proven his worth as a player of many abilities in the form of skills and agility. The above viz depicts the winger actions made by the player this season. He makes 3.09 progressive runs on average and completes 7.3 successful dribbles per 90. Dango also makes 5.29 forward passes with a 49% rate of accuracy. Additionally, he makes 2.65 crosses per match. 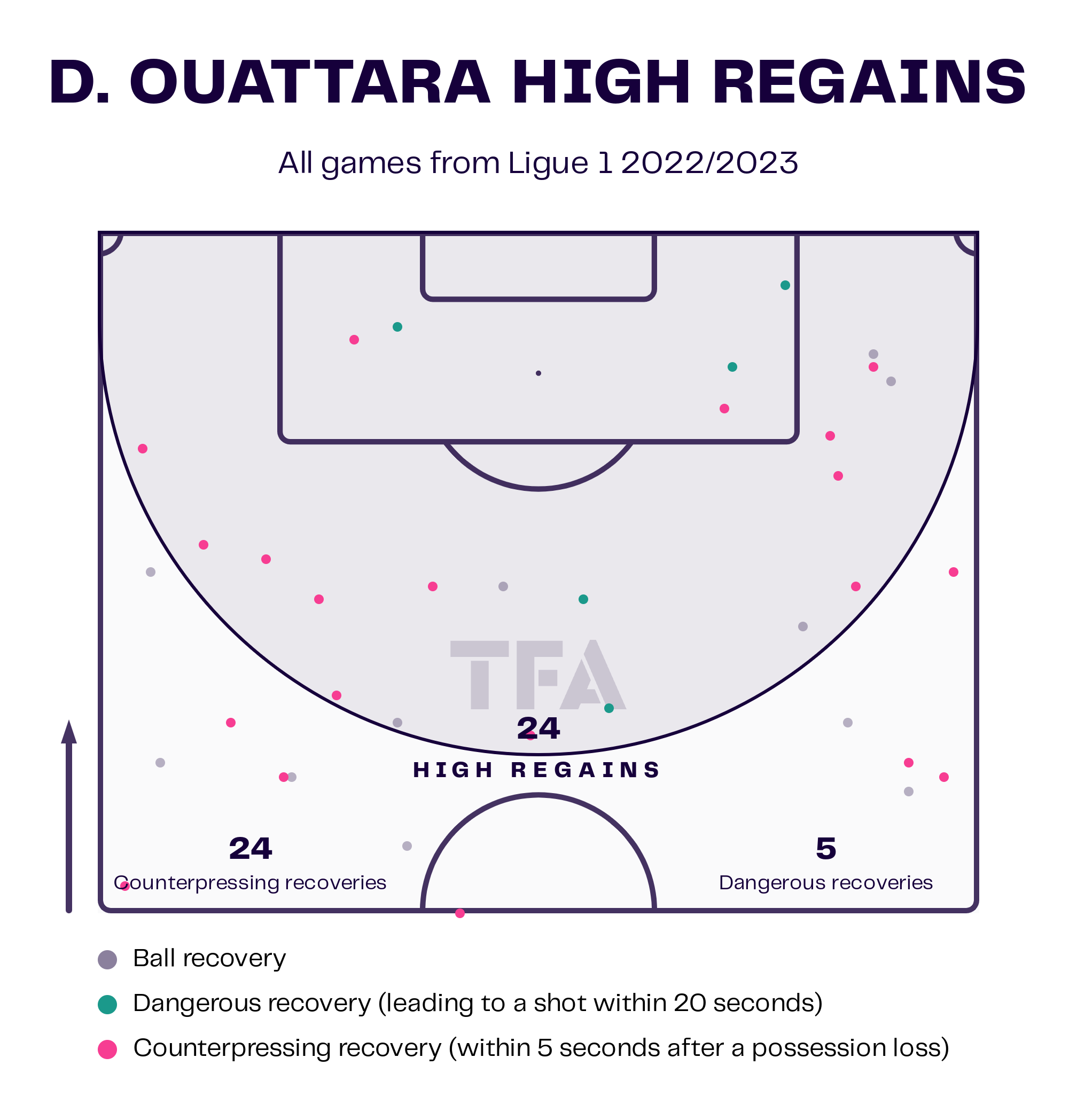 The above viz represents various high regains made by Dango for Lorient in the 2022–23 season. It can be seen that he has made 24 high regains, 24 counter-pressing recoveries, and five dangerous recoveries. He makes 6.34 recoveries in the opponent’s half and 4.19 interceptions per 90. Additionally, he is successful in 54.7% of the defensive duels contested on average. He has the ability to put pressure on the opponent’s backline and is skilled at doing so.

Dango Ouattara has been a regular performer for Lorient and has helped the team over the course of the season with his performance on the pitch. He performs well in the final third and also provides his team with high pressure up the pitch. He has been setting an example on the pitch and providing the necessary firepower in attack for Lorient.

‘Real goalscorer’ – Lille star could be another Luis Campos masterclass

Under the microscope: How Lille have fared this season as compared...

Under the microscope: Why Reims are looking stagnant in the second...

PSG superstar in the first big dip of his career as...