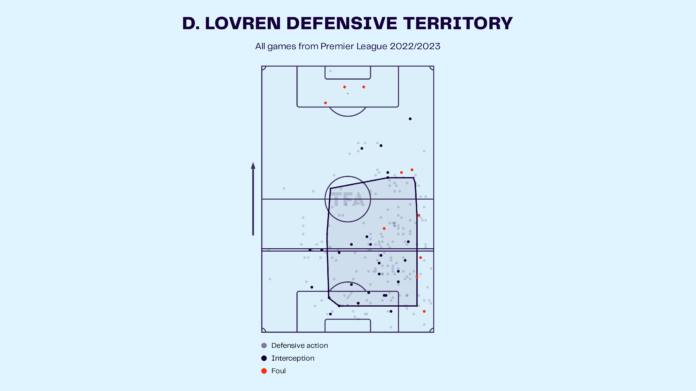 Dejan Lovren is a Croatian professional footballer who plays as a centre-back for Ligue 1 club Lyon and the Croatia national team. Having previously played for Lyon for three and a half seasons, he has returned to the club from Russian Premier League side Zenit FC, where he spent two seasons. He has already played two matches for Lyon since coming in and has helped the team keep one clean sheet. He is a versatile defender who tends to move up at times in order to take a shot. Dejan Lovren has taken 14 shots in 15 matches for Zenit in 2022/23 with 35% accuracy. He is good in defence and wins duels for his team. He has been a key figure in Croatia’s success in recent times and has tonnes of experience under his belt. Let’s look at some of his stats in recent times to assess how the Croatian will provide strength to Lyon’s backline. 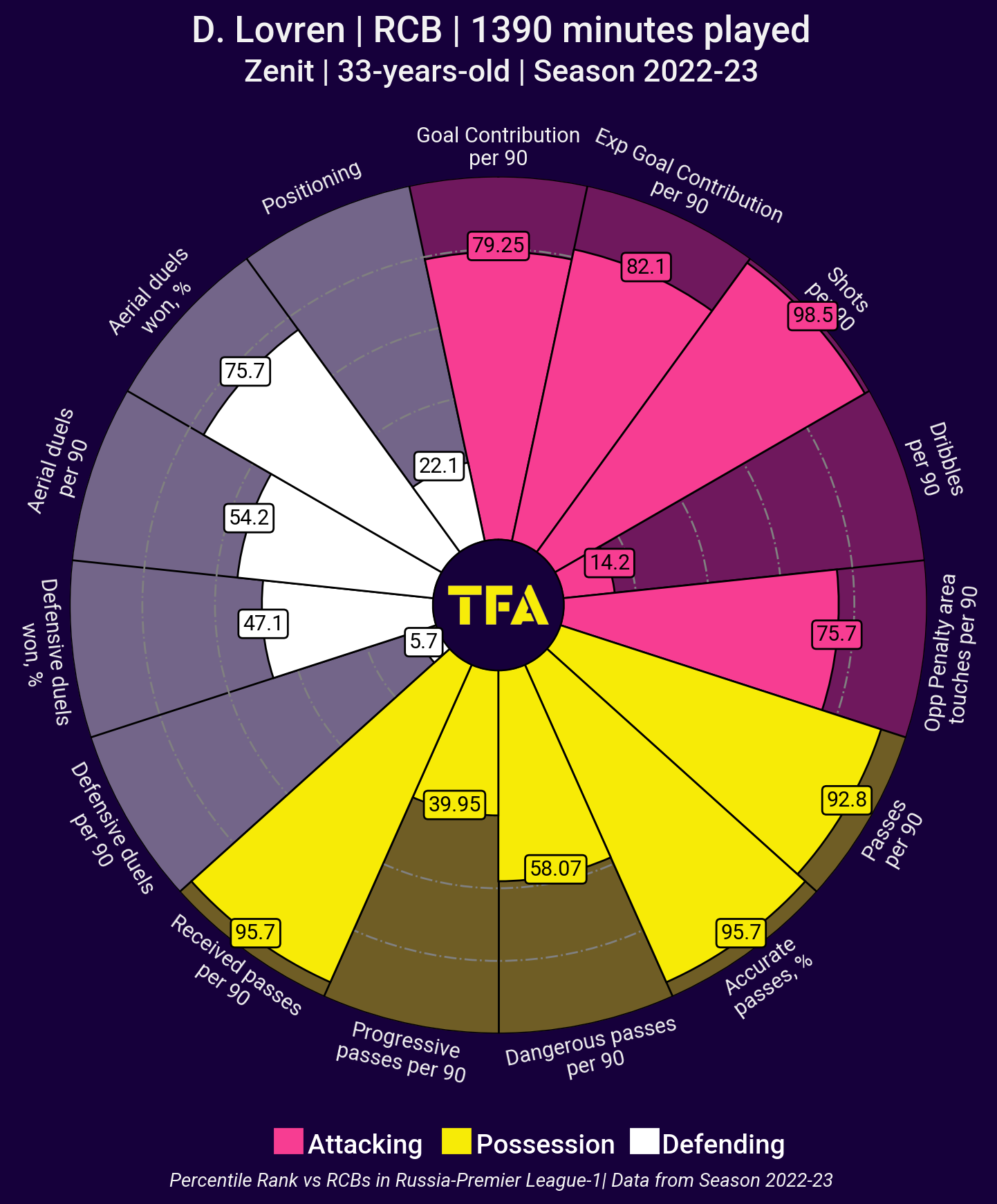 The pizza chart above depicts his percentile rank in comparison to the other centre-backs in Russia’s top flight. His offensive capabilities have been significant for his team. He is ranked high in terms of shots per 90 minutes. Lovren is ranked high for accurate passes and passes per 90, and this has been a crucial advantage for the player and his team. Defensively, he has fair numbers compared to other centre-backs and performs well in aerial battles. He is a versatile player, and his ability to adapt to multiple positions brings a lot to the team. 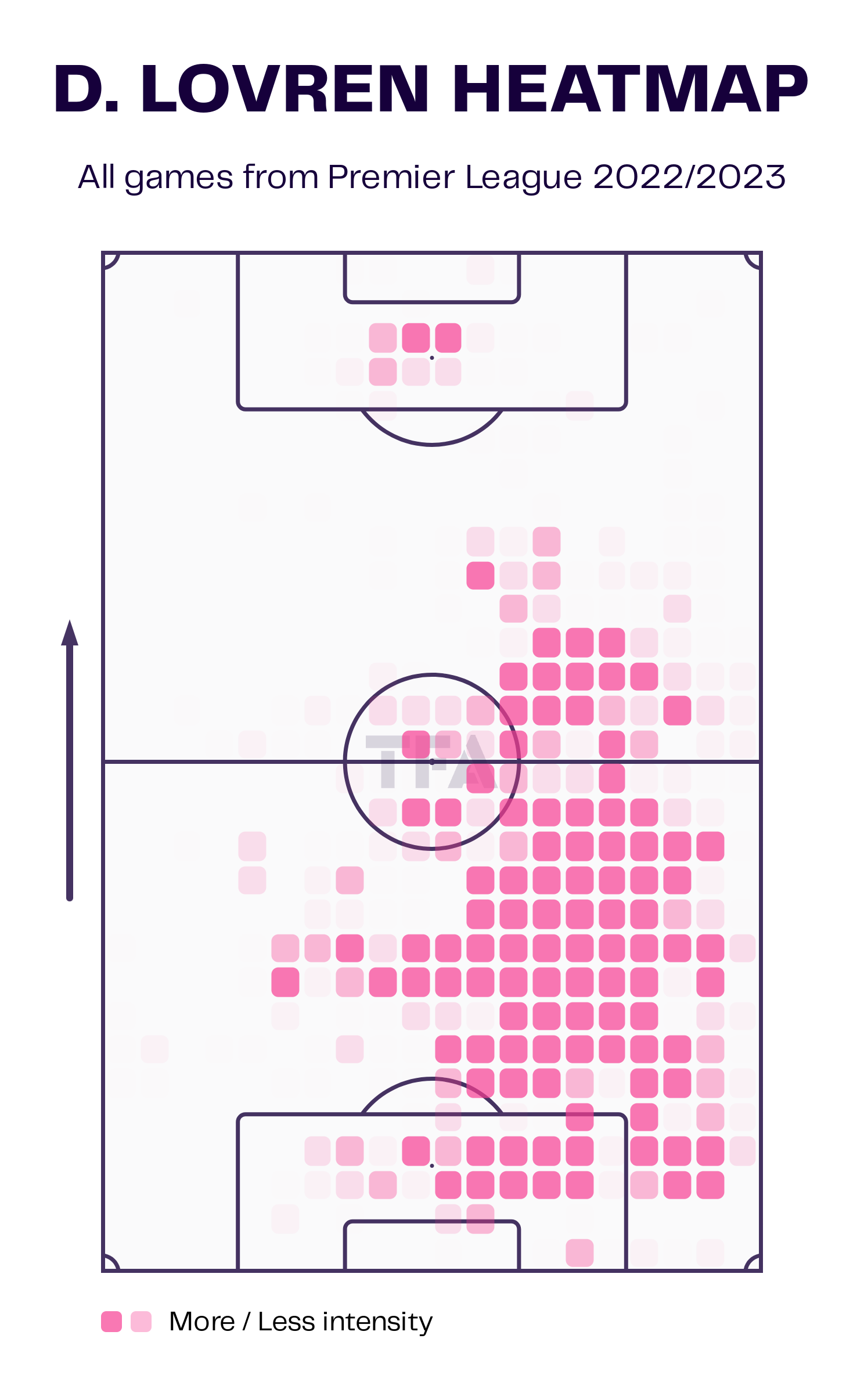 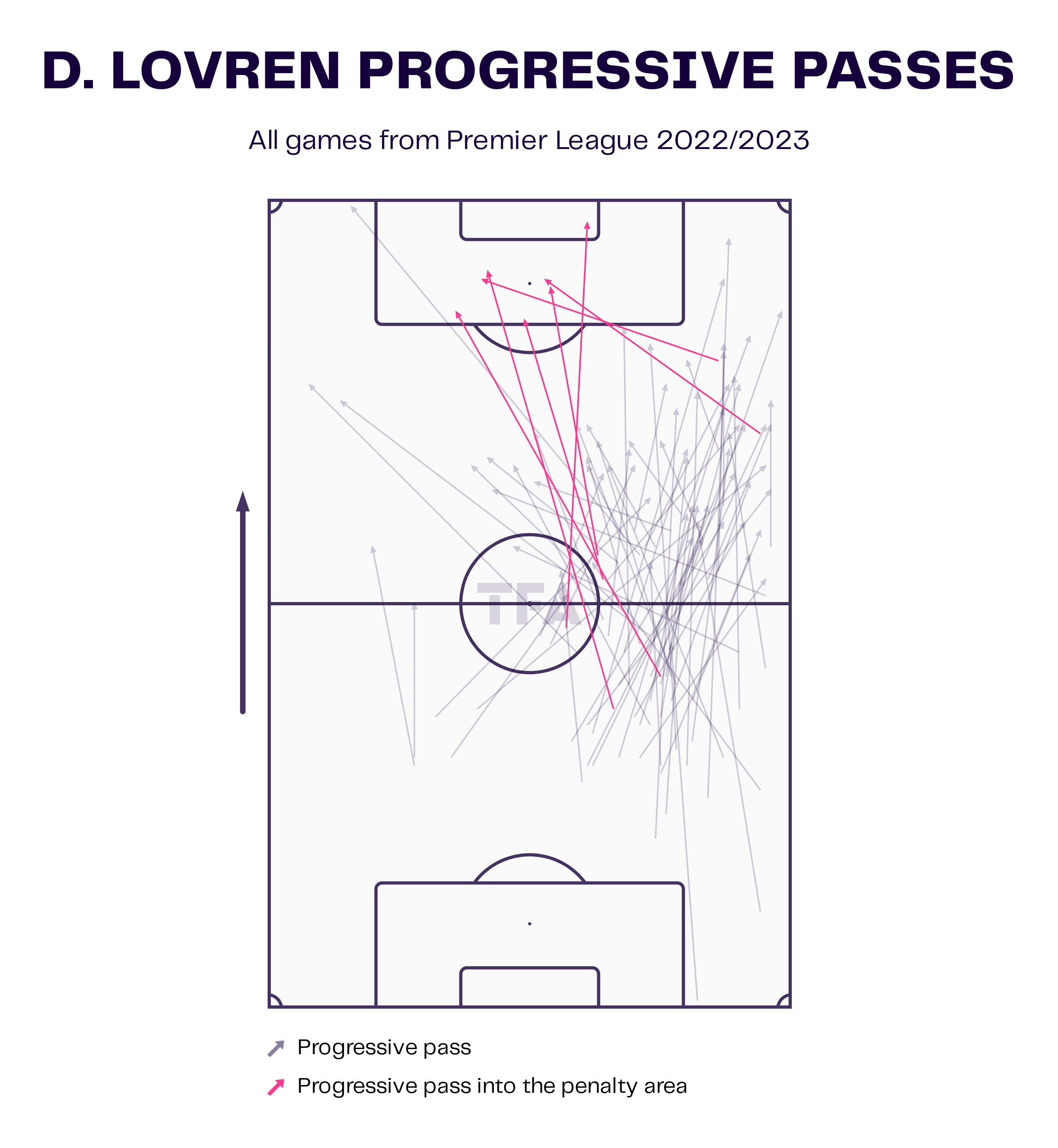 Dejan Lovren covers the central defensive area in the defensive and middle thirds for his club. He performs defensive duties as a centre-back, and most of his intensity can be seen on the right side of the defensive third of the pitch for his team. He makes 0.32 progressive runs per 90 minutes and mostly prefers to release the ball into the midfield or wider areas, averaging 17.48 forward passes per 90 minutes. Additionally, he manages to make 1.02 passes to the penalty area per 90, having 43.4% accuracy. 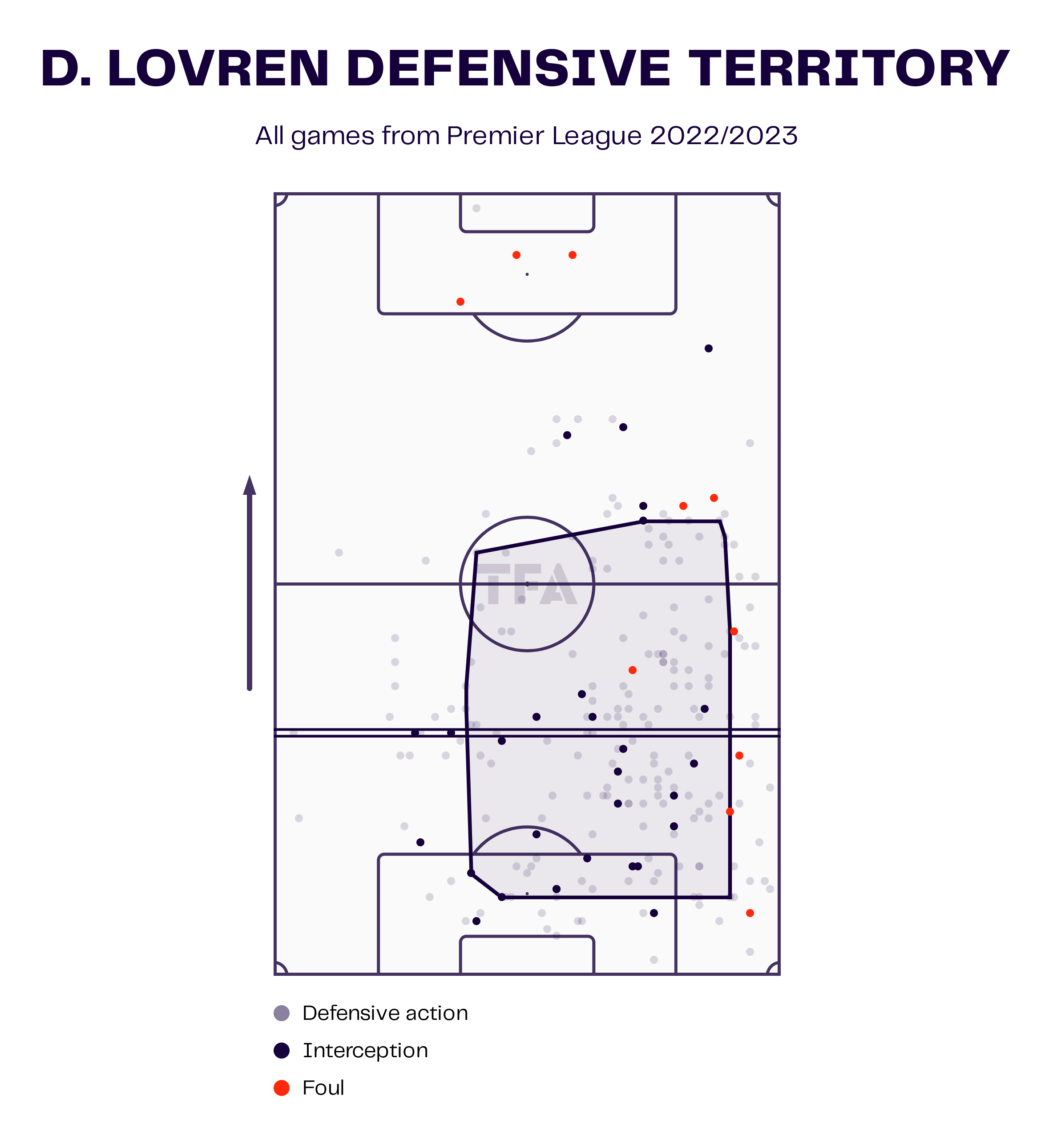 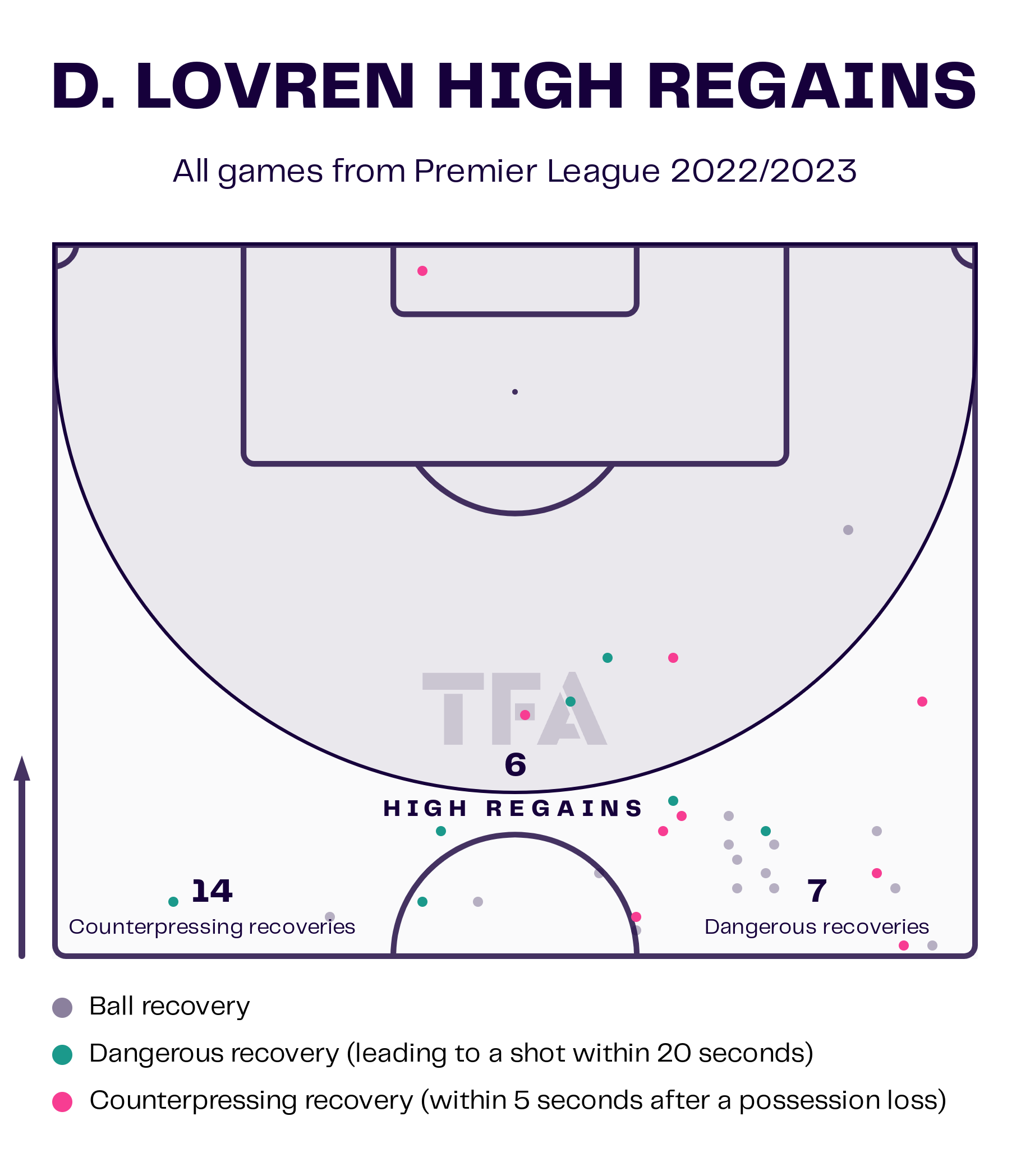 Lovren makes occasional movements in the opposition’s half in order to put high pressure on the opposition’s midfield and final third. The above viz represents various high regains made by the player for his Zenit in the 2022–23 Russian Premier League Season. It can be seen that he has made six high regains, 14 counter-pressing recoveries, and seven dangerous recoveries. Overall, he is a player with a good ability to press forward as well as halt the opposition from transitioning into an attack. He makes 11.2 recoveries in the opposition half per match. 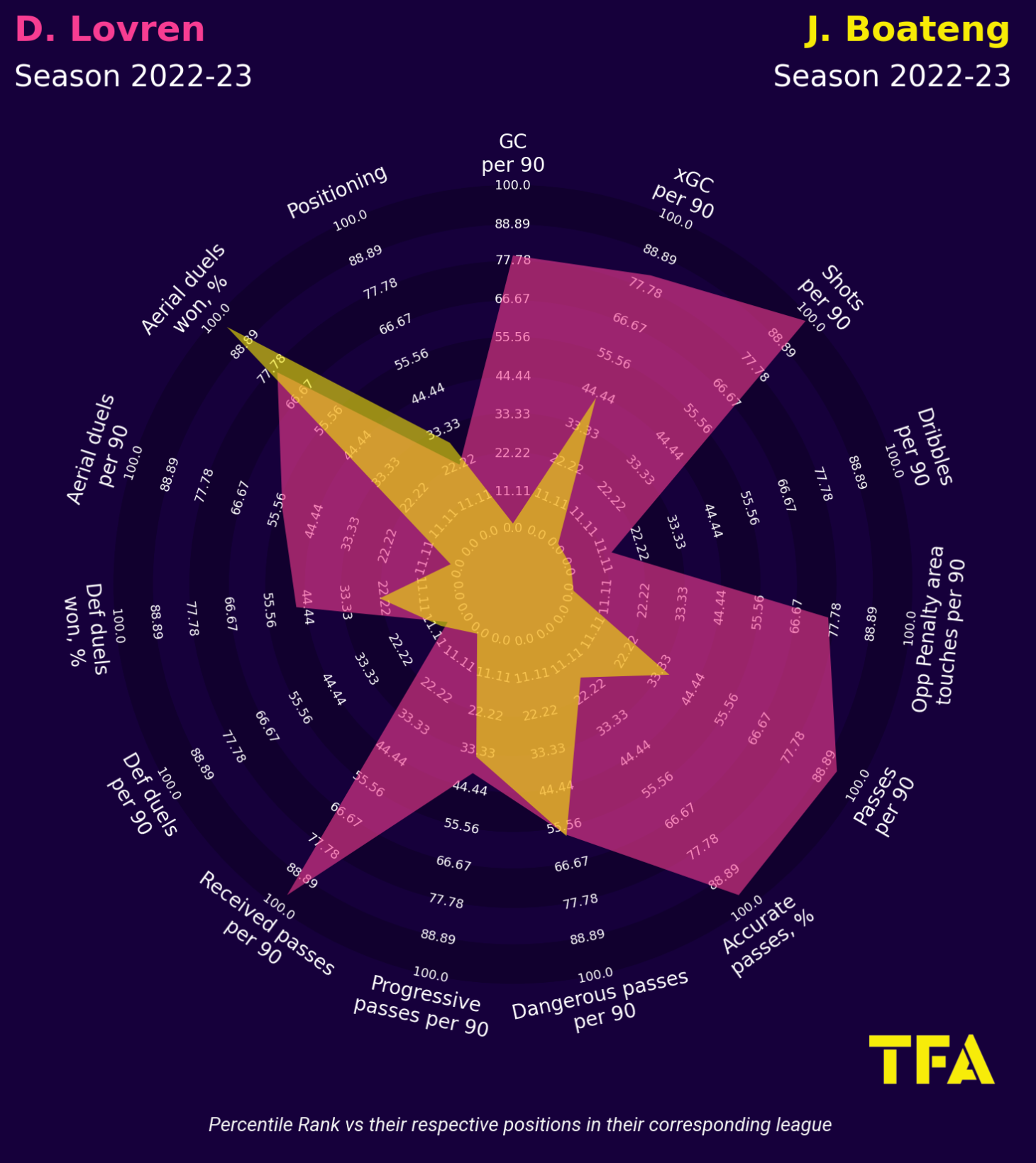 The above viz is a comparison between Dejan Lovren and Jerome Boateng for the matches played for their teams, respectively. Lovren has done well in defence and has better numbers in terms of defensive duels and aerial duels won. Boateng, on the other hand, does not have any advantage in any of the areas. Lovren has impressive passing abilities and has made more accurate passes, as well as faring extremely well in attack as well. Additionally, the player attempts 0.97 shots per 90, with a shot accuracy of 26.7% for attempted shots. Lovren will be an excellent replacement for the deteriorating Boateng, who is not in his peak form anymore.

Overall, Lovren is a player with tonnes of experience under his belt and can provide the necessary help in defence. He has the ability to guide the backline and is a good leader at the back. He is skilled with the ball and knows his way around the field. Lyon will be pleased to have him back on board, and Lovren will be looking forward to his return to Ligue 1.

‘Changed as a player’- International midfielder still has a future at...