Florent Mollet is a French professional footballer who plays as a midfielder for Ligue 1 club Nantes. He made his professional debut for Dijon in Ligue 2 in 2012, and some years later, he joined Ligue 1 side Montpellier. He went on to make a total of 126 appearances for Montpellier in Ligue 1 from 2018–2022 and then made a brief move to the Bundesliga, where he played for Schalke and made only nine appearances in the Bundesliga in 2022–23. He plays in the middle of the park and provides support in all areas of the middle third for his team. His 2021/22 season was extremely impressive, which is why Schalke added him to their midfield in 2022. Unfortunately, his move to the Bundesliga did not go as expected, and the player has returned to France after a brief spell in Germany. He is back in Ligue 1 and will look to find the form he left in. Below, we look at some of his stats from his 2021/22 season in Ligue 1 and see what he will bring to the Nantes midfield. 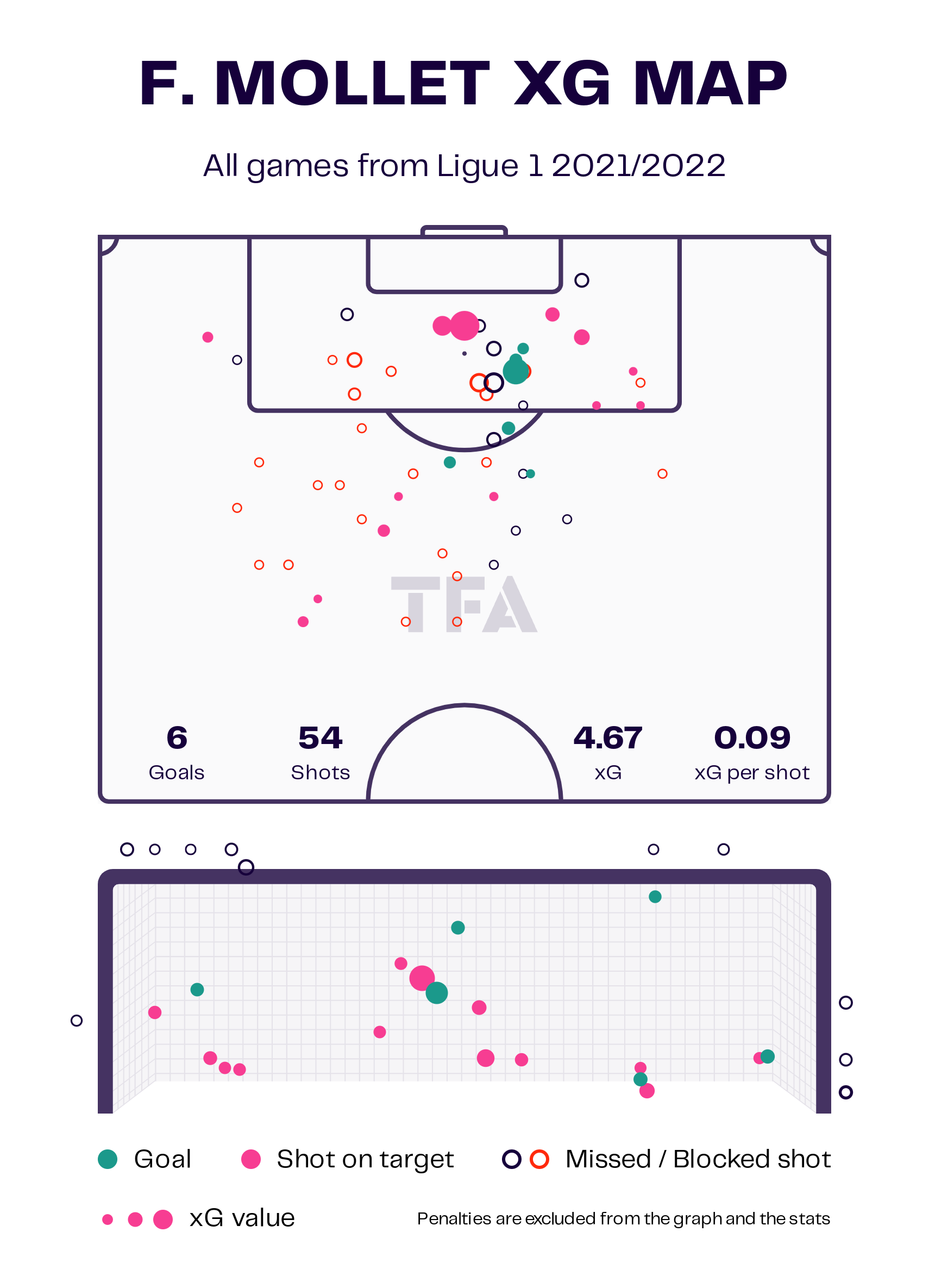 Florent usually plays in the centre of the midfield and makes movements up the pitch in order to create an attacking threat and receive the ball in dangerous areas. The above viz is a shot map for the player for all games in Ligue 1 2021/22. He made 35 appearances for Montpellier during the season. Mollet has the ability to score goals, and he has found the back of the net six times this season. He attempted 54 shots in the 35 matches (4.67 xG) and an xG per shot of 0.09. He takes 1.76 shots per 90 and has an accuracy of only 35.2%.

Progression up the pitch 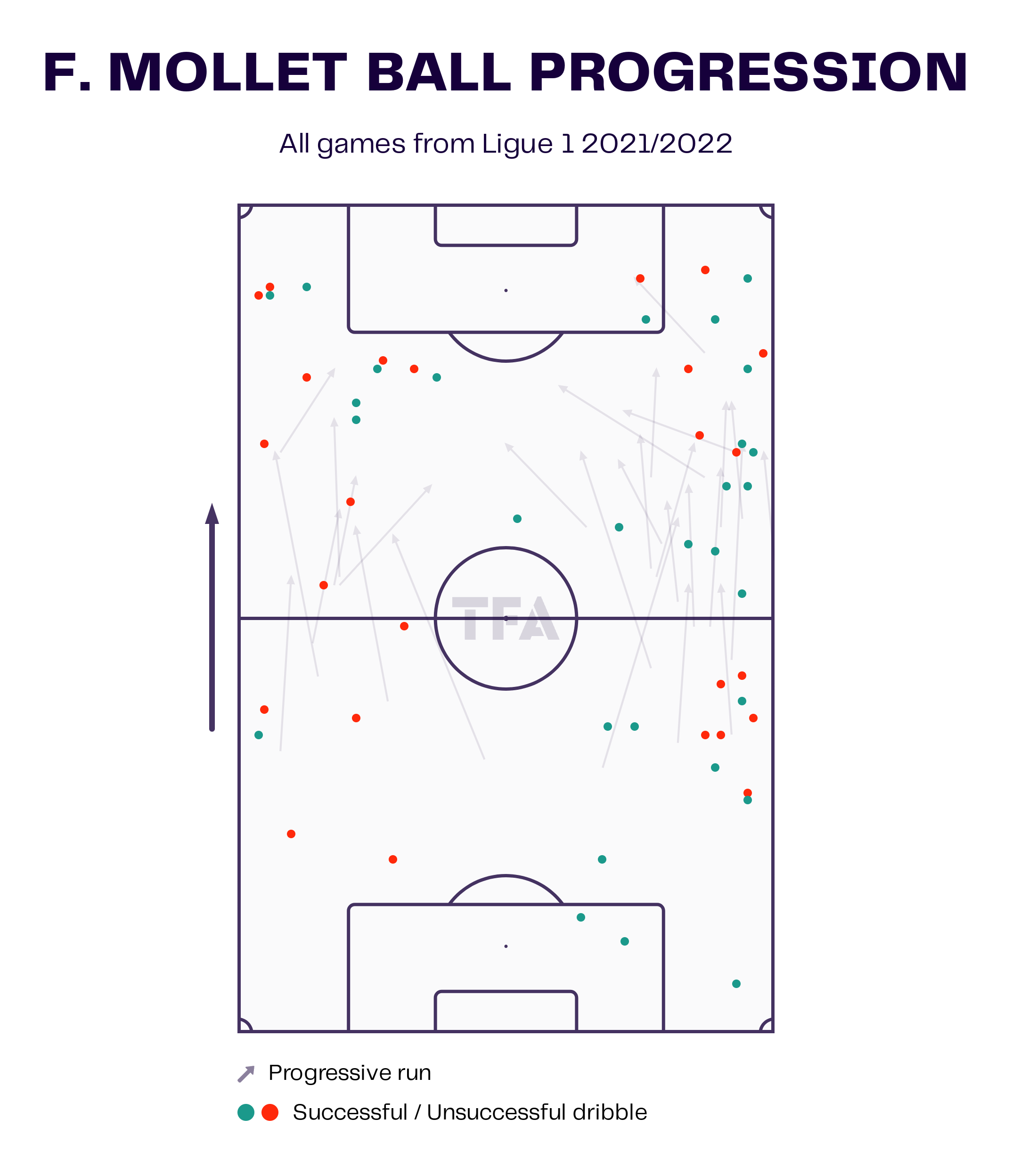 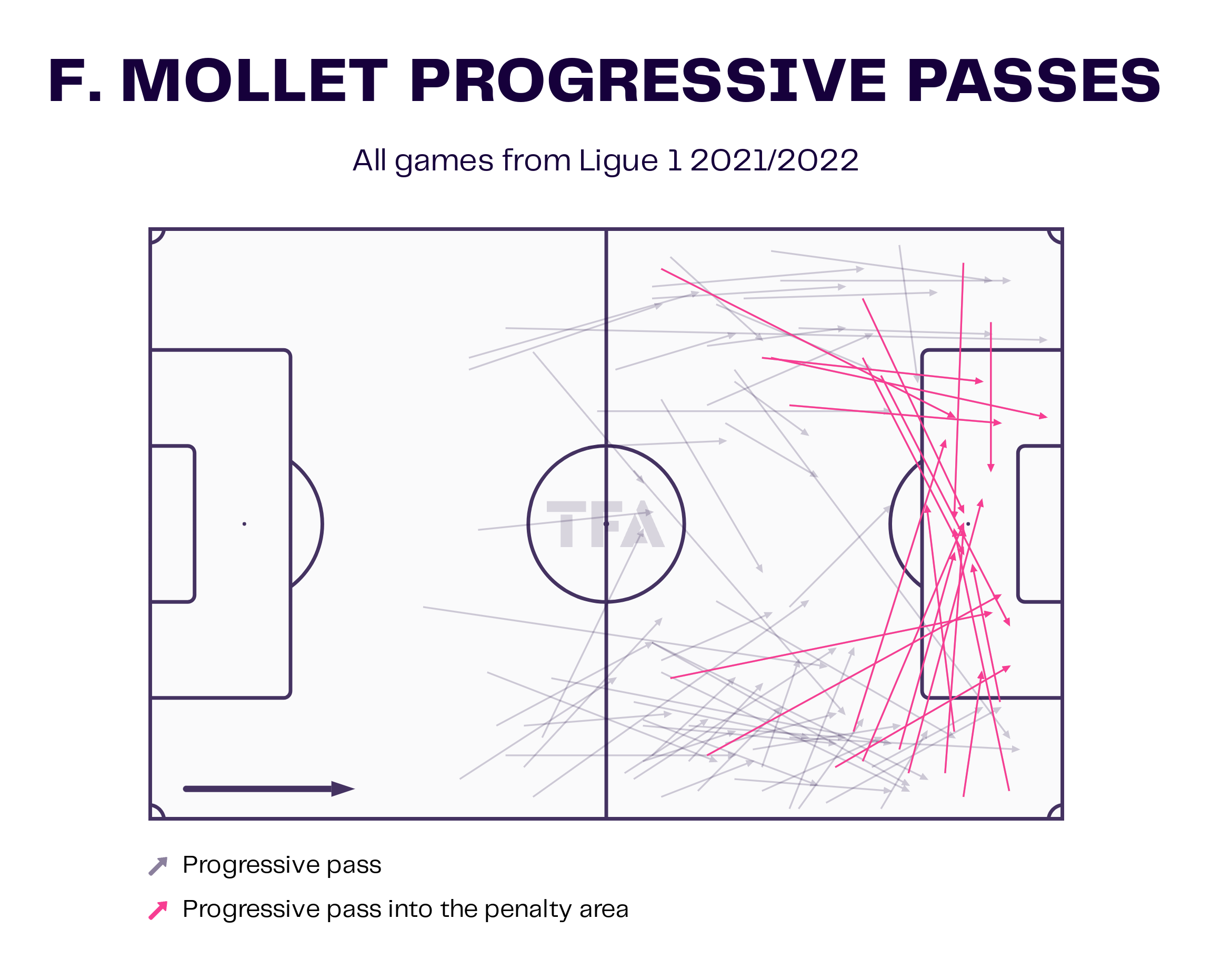 Florent Mollet likes to play football through the middle of the pitch. He attempts 1.76 dribbles per match, with 53.2% of them being successful. Most of his action is in the middle and final third of the pitch. His confidence and ability to advance the ball are what make him worth more and are one of the reasons behind his success. The player has an average of 2.02 touches in the penalty area per 90. Additionally, he makes 0.91 progressive runs on average.

He makes 34.26 passes on average per 90, with a completion rate of 86%. It can be seen that the player makes many forward passes, averaging 7.8 per match, and makes 3.3 passes to the final third per 90 minutes, next to 1.95 passes into the penalty area. 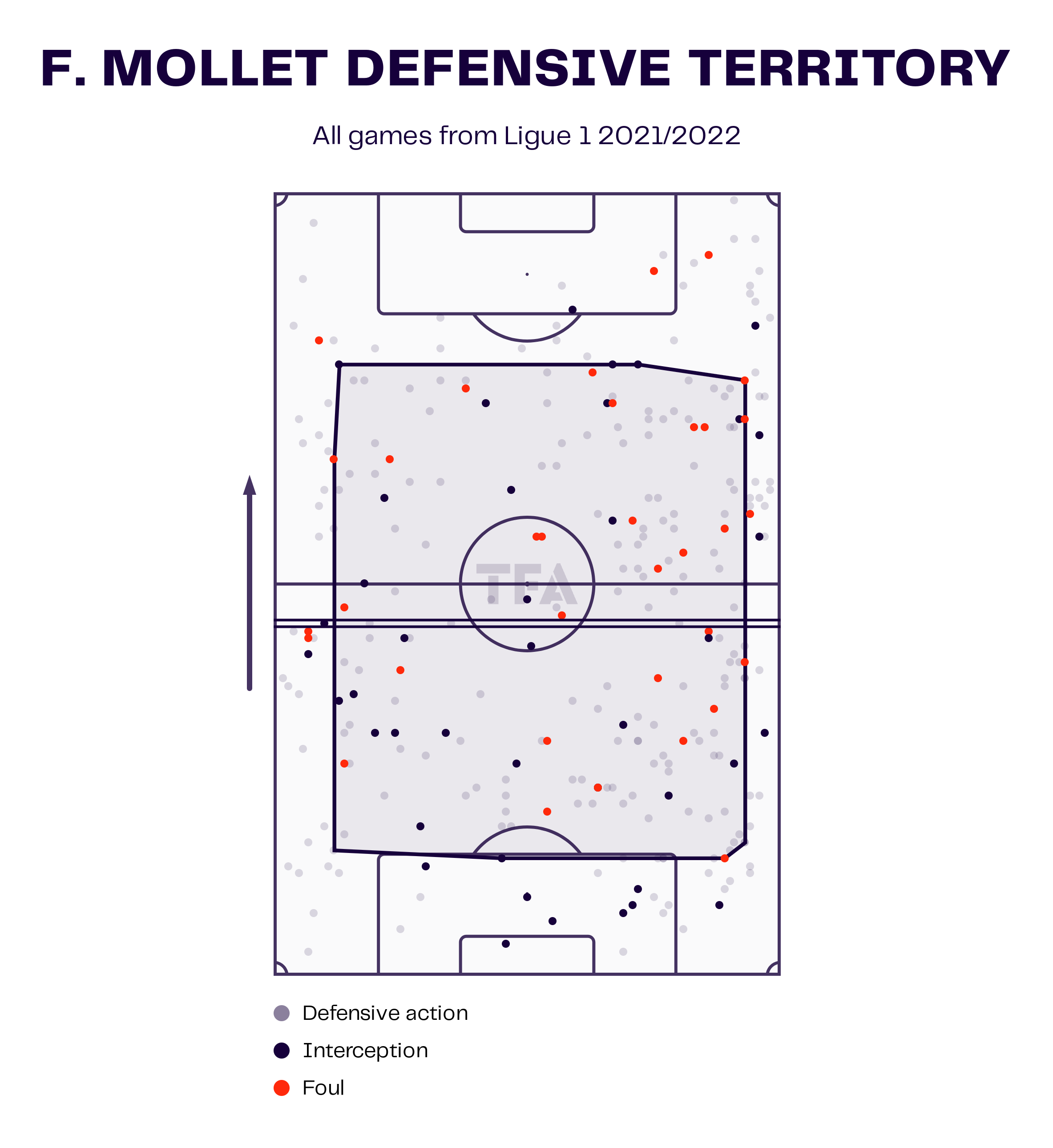 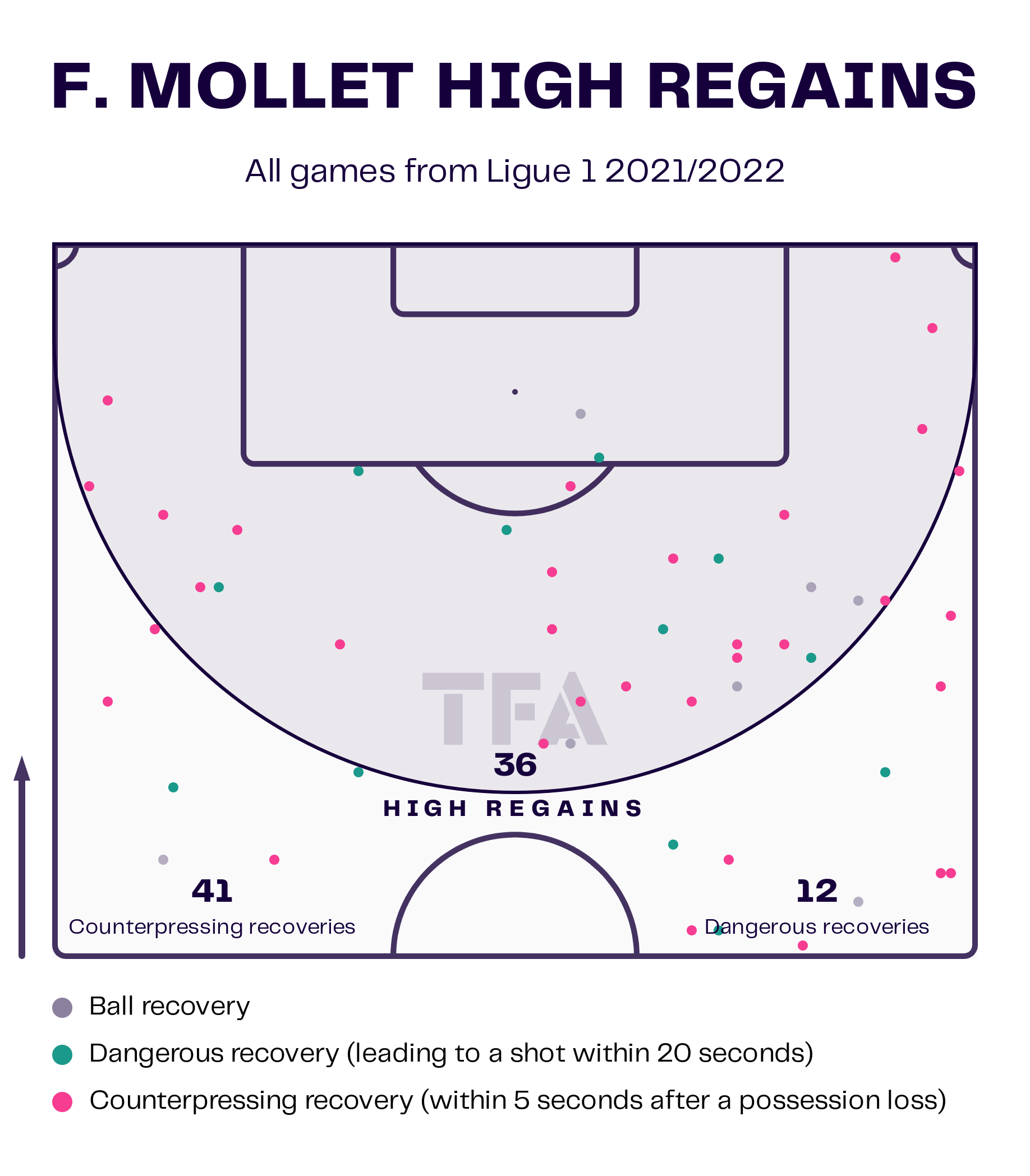 The above viz shows the defensive territory and various high regains of the player for Montpellier in Ligue 1 2021/22. It indicates that Mollet is involved in a lot of defensive actions in the defensive third and makes interceptions near the defensive and middle thirds. It can be observed that the player has given up some fouls and has averaged 1.11 fouls for the season. Overall, he has an average of 14.4 duels per 90 and a 31.1% win rate. Mollet averages 3.25 interceptions per 90 minutes and makes a lot of movement in the opposition’s half in order to put high pressure on the opposition’s midfield and final third. He makes 4.1 successful recoveries in the opposition’s half per 90, compared to more than 35 high recoveries, 40 counter-pressing recoveries, and 12 dangerous recoveries.

Overall, Florent Mollet has provided strength in the midfield for whichever team he has represented. He provides stability and control in the midfield and helps the team progress up the pitch. His awareness of positioning and making dangerous passes is key to his success on the pitch. Nantes will be looking forward to his contributions, and the player will look to help the team secure a decent position by the end of the season.

Transfer Analysis: Why are Strasbourg in pursuit of the Moldovan full-back?