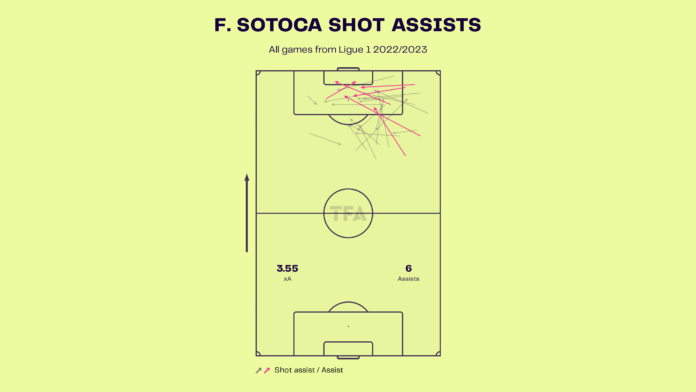 Florian Sotoca is a striker for French Ligue 1 club Lens. Florian Sotoca joined Lens in 2019 and has become a veteran with plenty of experience for Lens. Florian Sotoca comes from France, and his current age is 32 years old. Florian Sotoca is a Forward who has appeared in 18 matches this season in Ligue 1, playing a total of 1498 minutes. Florian Sotoca scores an average of 0.36 goals for every 90 minutes that the player is on the pitch. The player has scored a total of six goals so far this season in the league, which places him second on the Lens squad’s Top Scorers list. Beyond his scoring, his assists have also been vital to Lens’ strong form, again displaying his intelligence and, at times, sheer audacity. Having formerly played on the wing, he is able to use his strength and mobility to pull defenders out of position, freeing the team’s quicker attackers to get closer to the goal with regularity. Indeed, in this way, his becoming the creative hub of the team has lent them much-needed dynamism. Below are a few stats for the player’s performance from the current season. 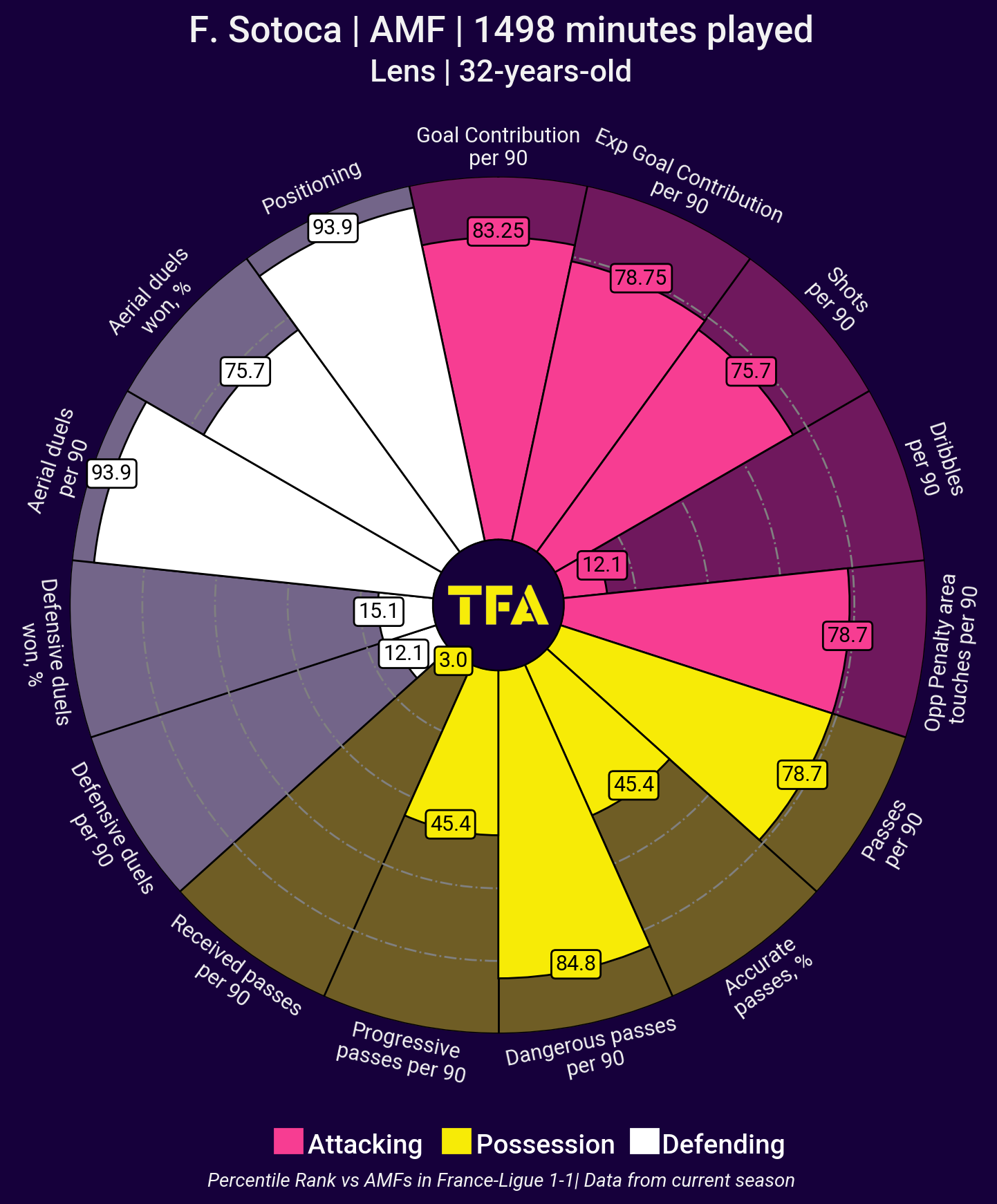 The above viz shows the percentile rank of the player in comparison to other players in Ligue 1. Sotoca is a veteran in the midfield, a big threat in front of goal, and ranks among the top for goal contributions, averaging 0.34 goals in the league. Overall, he ranks highly in expected goals per 90, shots, and touches in the opposition’s penalty area per 90, proving to be an extremely efficient resource for the team. Sotoca gets 4.12 touches in the opposition’s penalty area per 90 minutes. 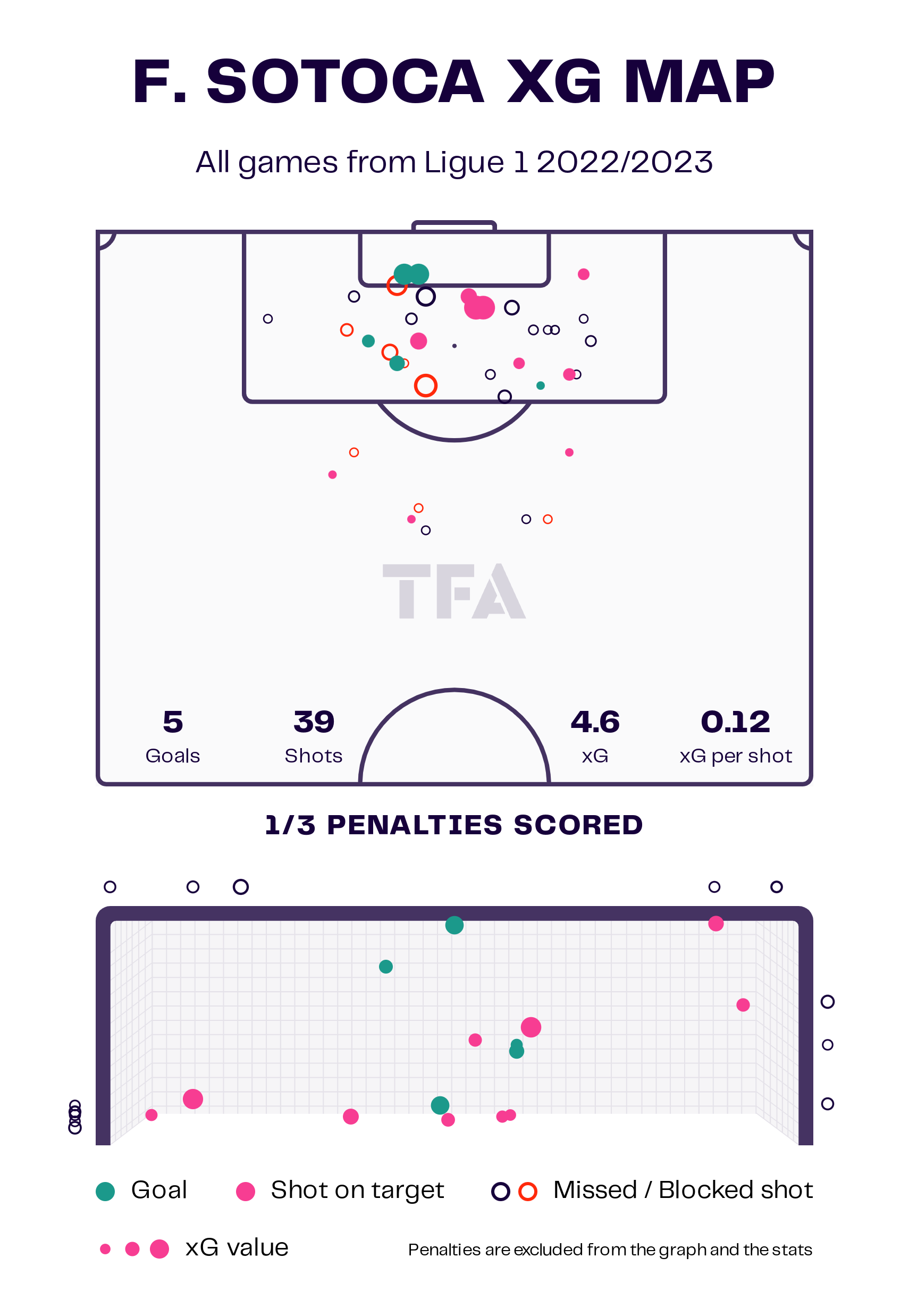 Florian Sotoca is racking up goals for Lens and is a crucial part of their attack. In the 2022–23 French Ligue 1 season, Florian Sotoca has played 17 matches (plus one as a sub). He has 20 shots on target from a total of 39 and has scored six goals (5.84 xG). Florian Sotoca averages 41 passes per match with a pass completion rate of 81% and has six assists. All of his goals have come from inside and around the six-yard box, along with a few attempts on goal from outside the box. He averages 2.37 shots per 90 minutes with 42.9% accuracy. 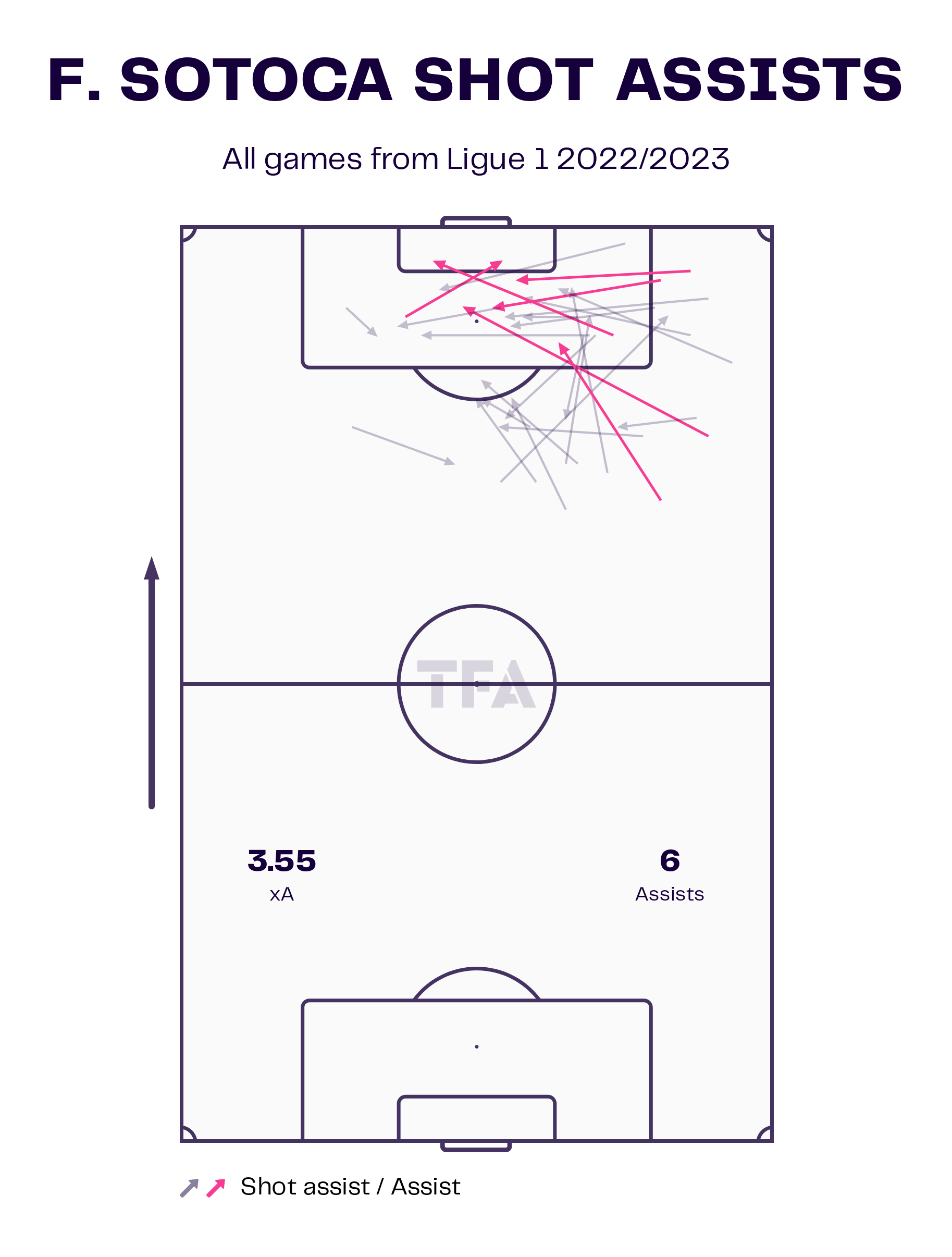 The above viz is a representation of shot assists for Florian Sotoca. With six assists, Florian has an xA of 3.55 for the matches played. He averages 0.34 assists in the current season and makes 1.47 shot assists per 90. Most of the actions have been taken inside the box, with some in the final third. He makes 5.71 passes into the final third per 90 with an accuracy rate of 77.2%. Overall, he makes 41.3 passes on average with 80.3% pass accuracy. 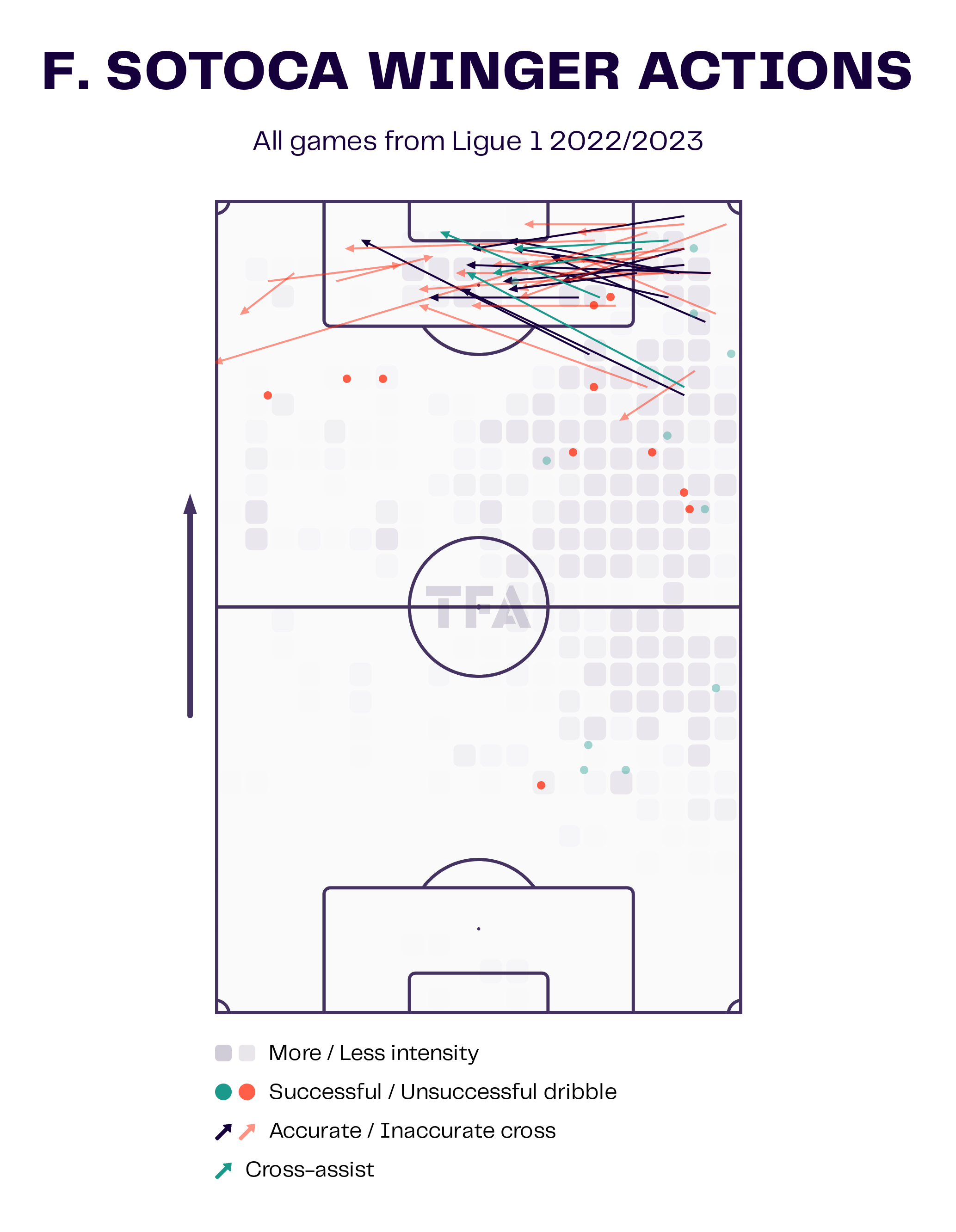 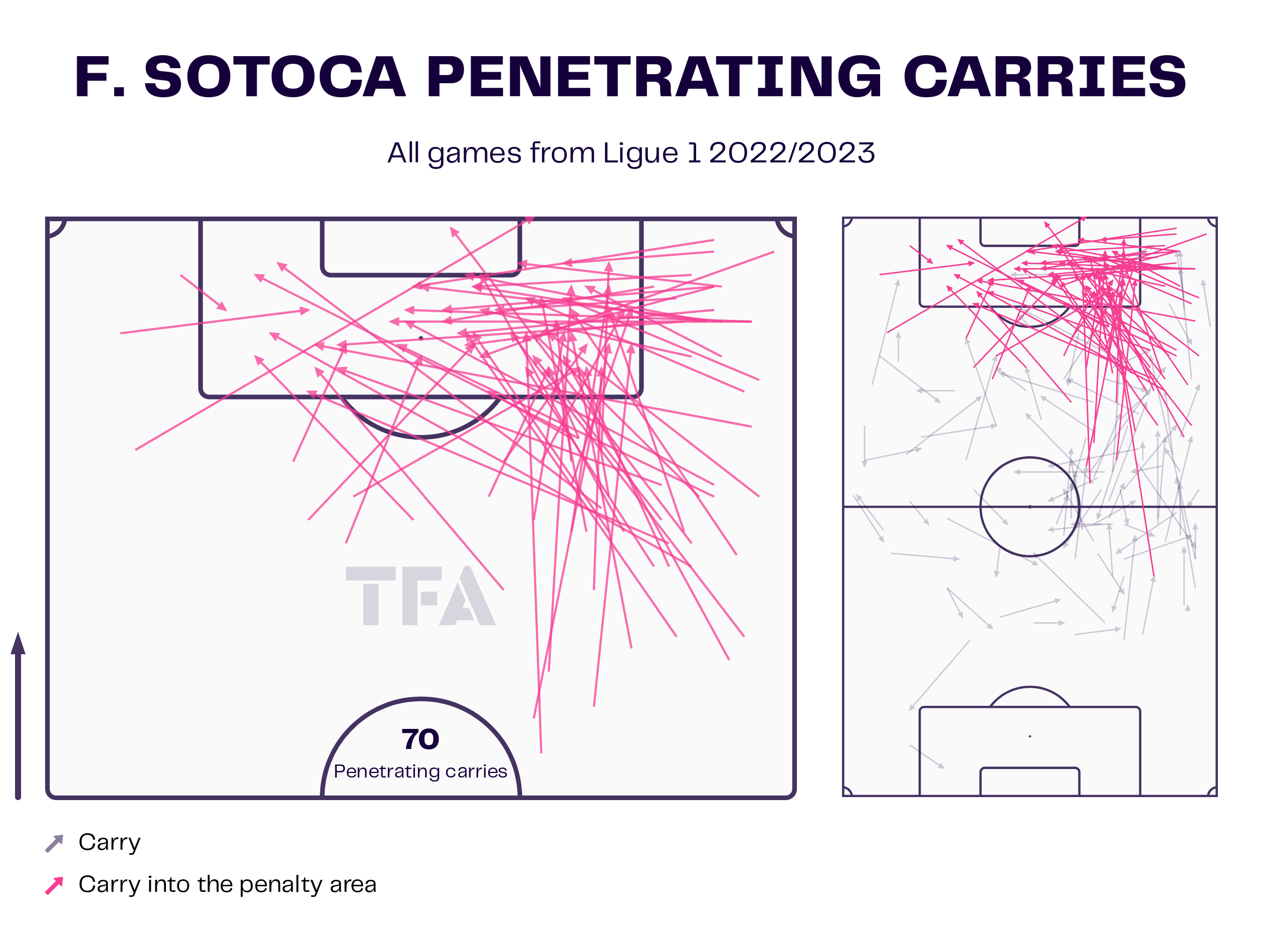 The above viz depicts Sotoca’s winger actions and penetrating carries in the current Ligue 1 season. Florian attempts to dribble in the middle third as well as the final third. The number of successful dribbles is decent in the midfield and goes on to increase in the final third. There are many attempts to cut inside from the flanks on the right wing as well. Additionally, he also makes 2.54 crosses per 90 with 42.2% accuracy.

Florian Sotoca likes to play direct football through the middle of the pitch. He attempts 1.58 dribbles per match with 53.6% successful dribbles, and this has been a crucial advantage for the player and his team. Most of his action is in the middle and final third of the pitch. His confidence and ability to move the ball forward in the final third have been a major threat for opponents this season. He averages 1.13 progressive runs per match and makes penetrating carries into the penalty area. Sotoca has made an astounding total of 70 penetrating carries for Lens in Ligue 1 this season. 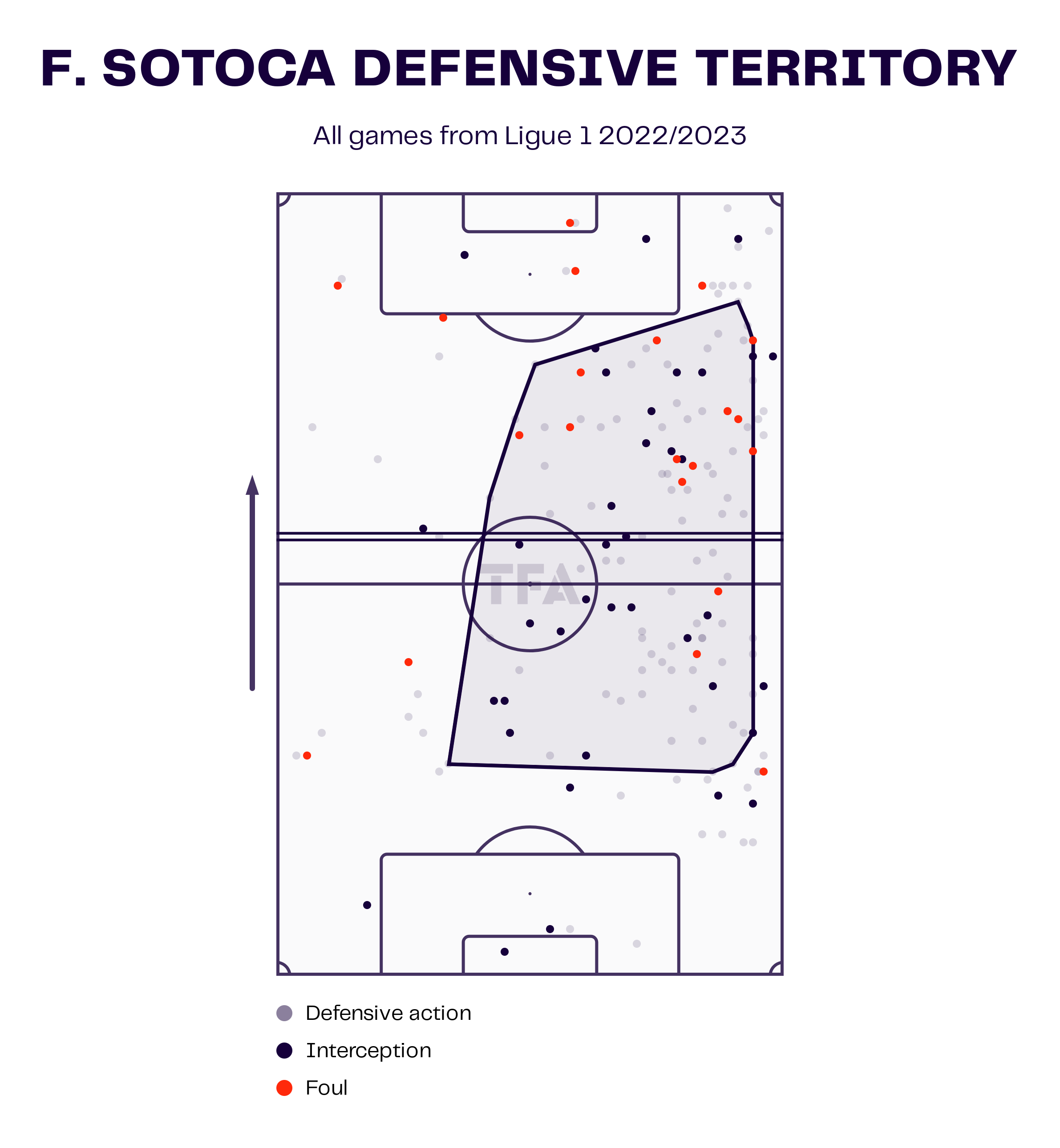 The above viz shows the defensive territory and various high regains of the player for Lens in Ligue 1 2022/23. It indicates that Florian is involved in a lot of defensive actions in the middle third and makes interceptions near the middle and final thirds. It can be observed that the player has given up frequent fouls and averages 1.19 fouls in the current season. Overall, he has an average of 14.63 duels per 90 and a 44.8% win rate. Florian averages 4.46 interceptions per 90 minutes and takes on 4.18 defensive duels, winning 44.2% of them per 90 minutes. 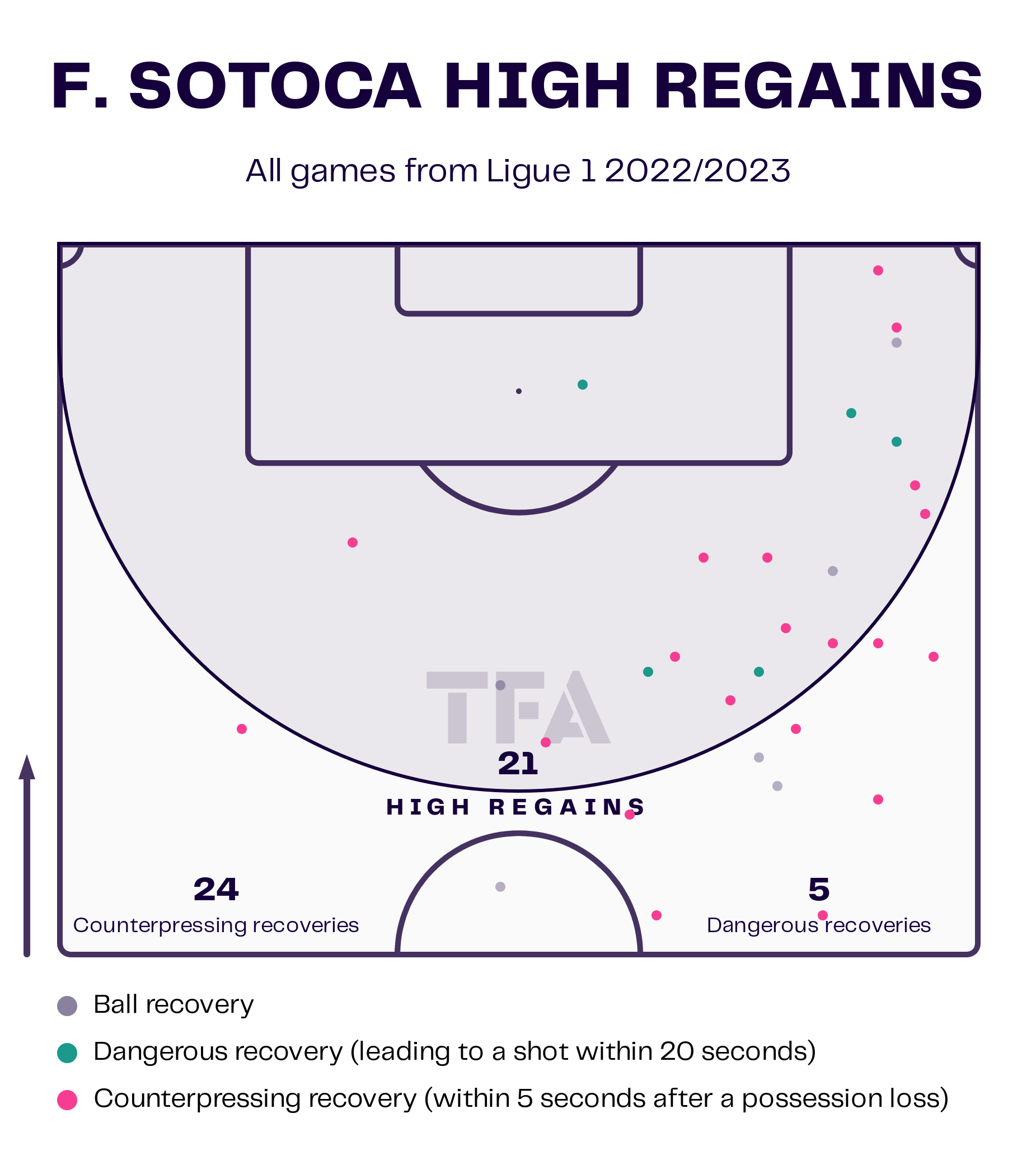 Overall, Sotoca has provided much-needed experience on the front. Now 32, it’s probably too late for Sotoca to follow in the footsteps of the likes of Giroud or Cabella and earn a big move abroad, but if things continue as they have, it should be great entertainment to see him battling in the Champions League come next season.

PSG vs Bordeaux : 1st vs Last