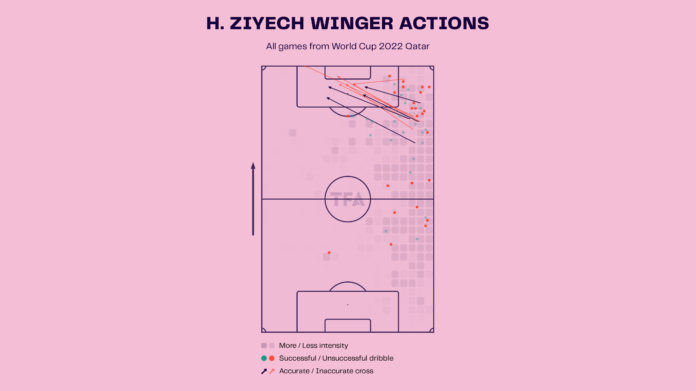 Hakim Ziyech is a professional footballer who plays as an attacking midfielder or winger for the English Premier League club Chelsea and the Morocco national team. He is nicknamed “The Wizard,” a title given to him by Ajax supporters. Hakim Ziyech’s outstanding performance at the World Cup has attracted interest from various clubs. Notably one of them is Ligue 1 side Marseille. Despite his World Cup performances, it is not a guarantee that the Moroccan forward will be selected for Chelsea’s starting lineup.

Despite playing very little for his club in the English Premier League this year, the 29-year-old had a big impact on the Atlas Lions in Qatar as they became the first African team to get to the World Cup semifinals. Ziyech has played just 148 minutes so far for Chelsea and made his only start of the campaign under the previous manager, Thomas Tuchel, back in August, having been linked with a move away from Stamford Bridge in the summer. Below are some stats with respect to Ziyech’s impressive World Cup, suggesting why he has gained interest from various clubs throughout Europe. 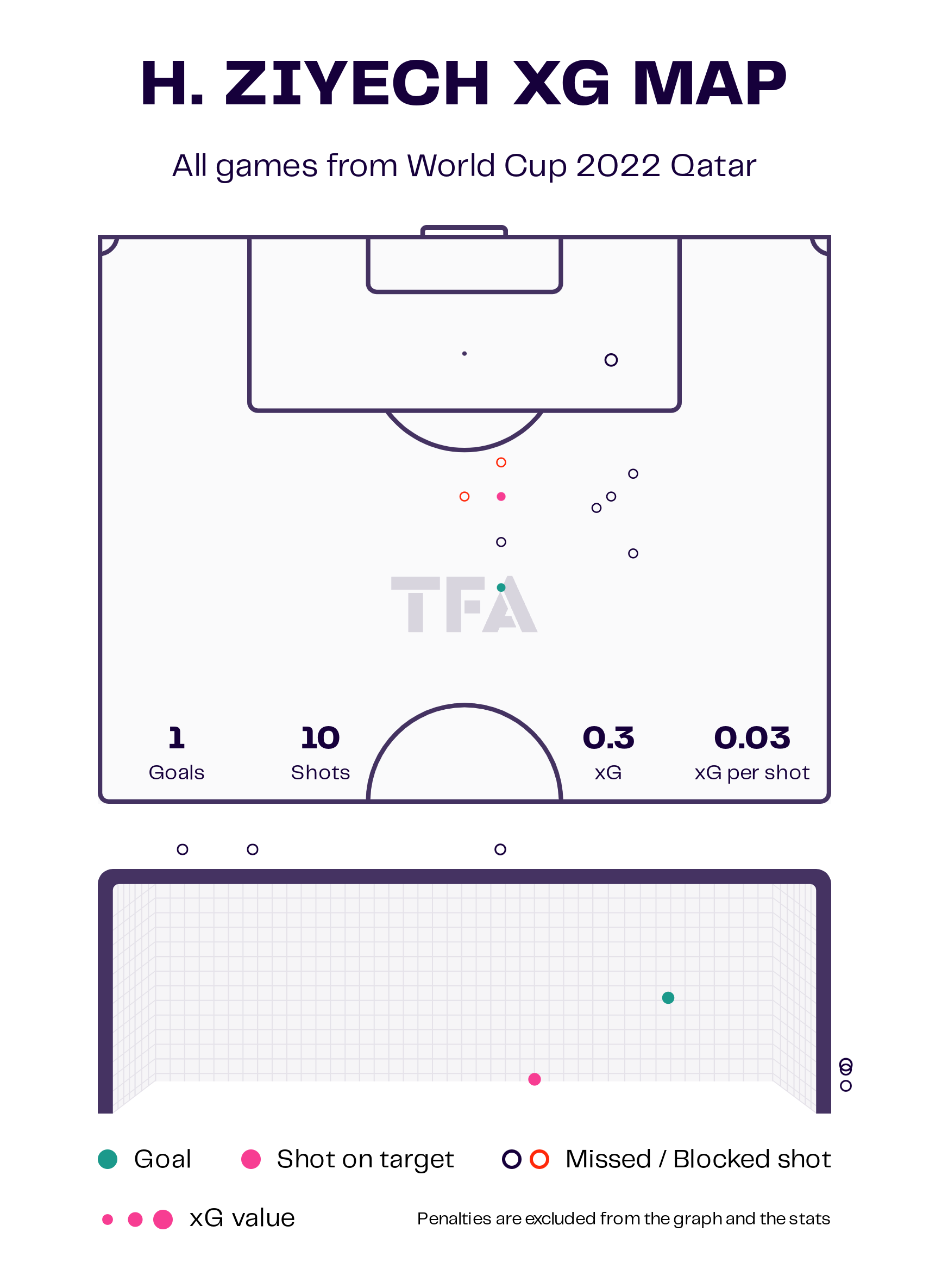 Over the years, Ziyech has been a prolific attacking option for Ajax, as well as Chelsea more recently. In the 2022 World Cup season, Hakim Ziyech played seven matches. They had three shots on target from a total of ten shots and scored one goal (0.55 xG). Hakim Ziyech averaged 39 passes per match with a pass completion rate of 78% and had one assist. 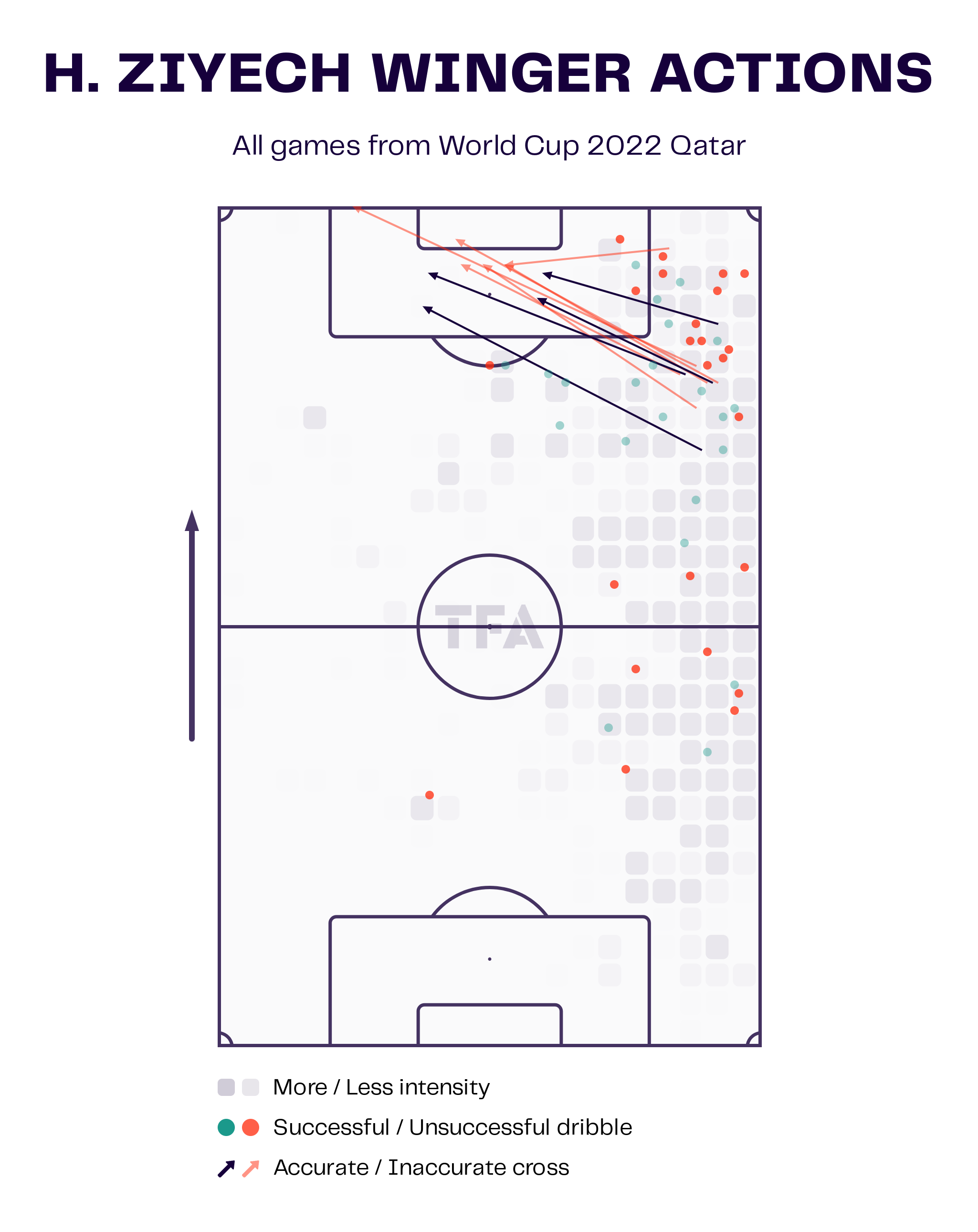 The above viz depicts Hakim’s winger actions during the 2022 World Cup. Ziyech attempts dribbles inside his defensive third as well as the final third. The number of successful dribbles is decent in his own half and goes on to increase in the final third. There are many attempts to cut inside from the flanks on the right wing. Additionally, he makes 4.85 crosses on average per 90 with a 37% success rate. In terms of dribbles, Ziyech completes 6.01 dribbles per 90 with a success rate of 49.2%. 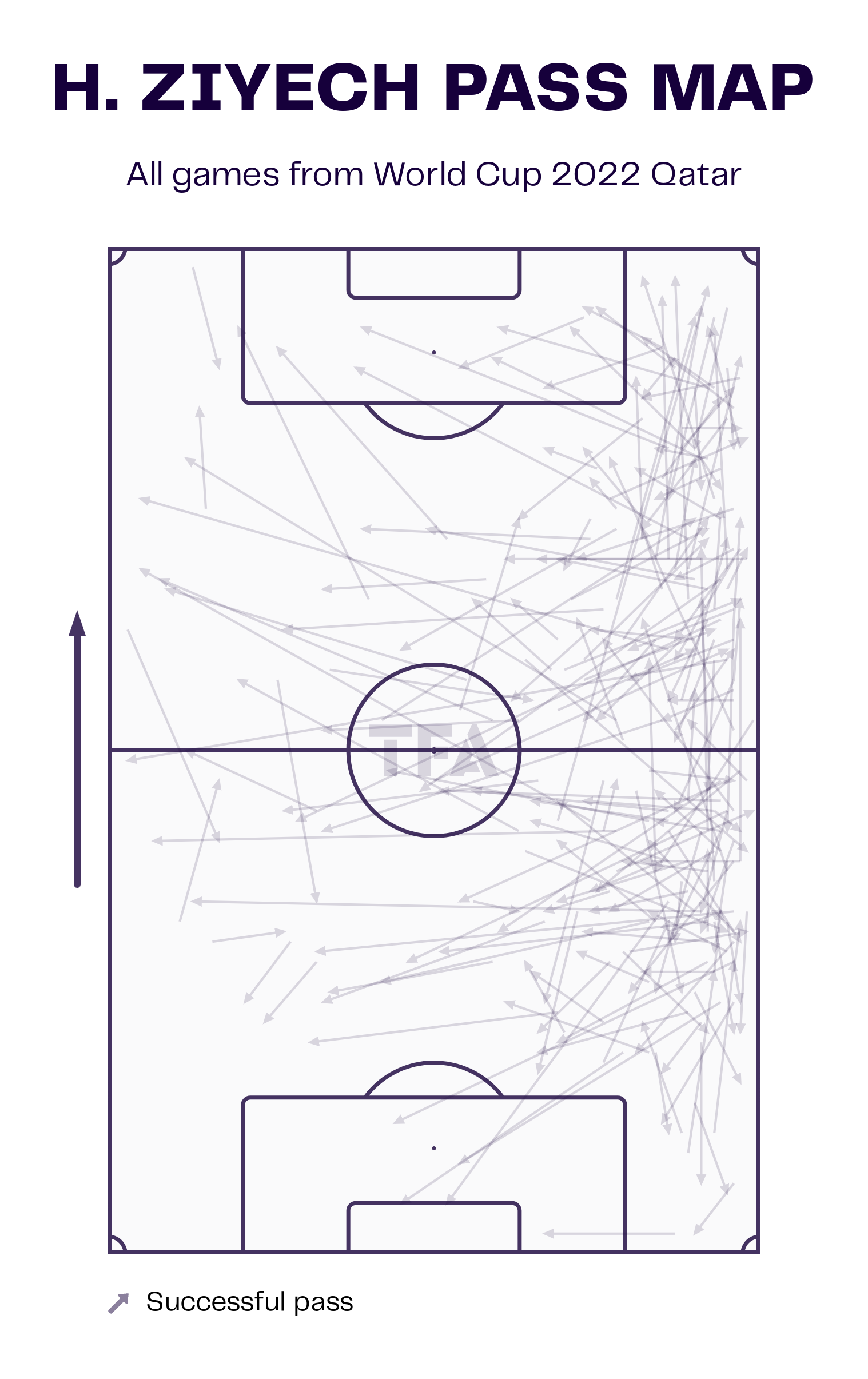 Hakim Ziyech makes most of his movement on the right flank. He is a constant attacking threat on the right wing and constantly positions himself in dangerous positions. The above viz is a representation of the passes made by the player in the World Cup. It can be observed that there are many successful passes into the box as well as cutbacks from wider areas. Hakim Ziyech averages 12 passes per match with a pass completion rate of 84%. 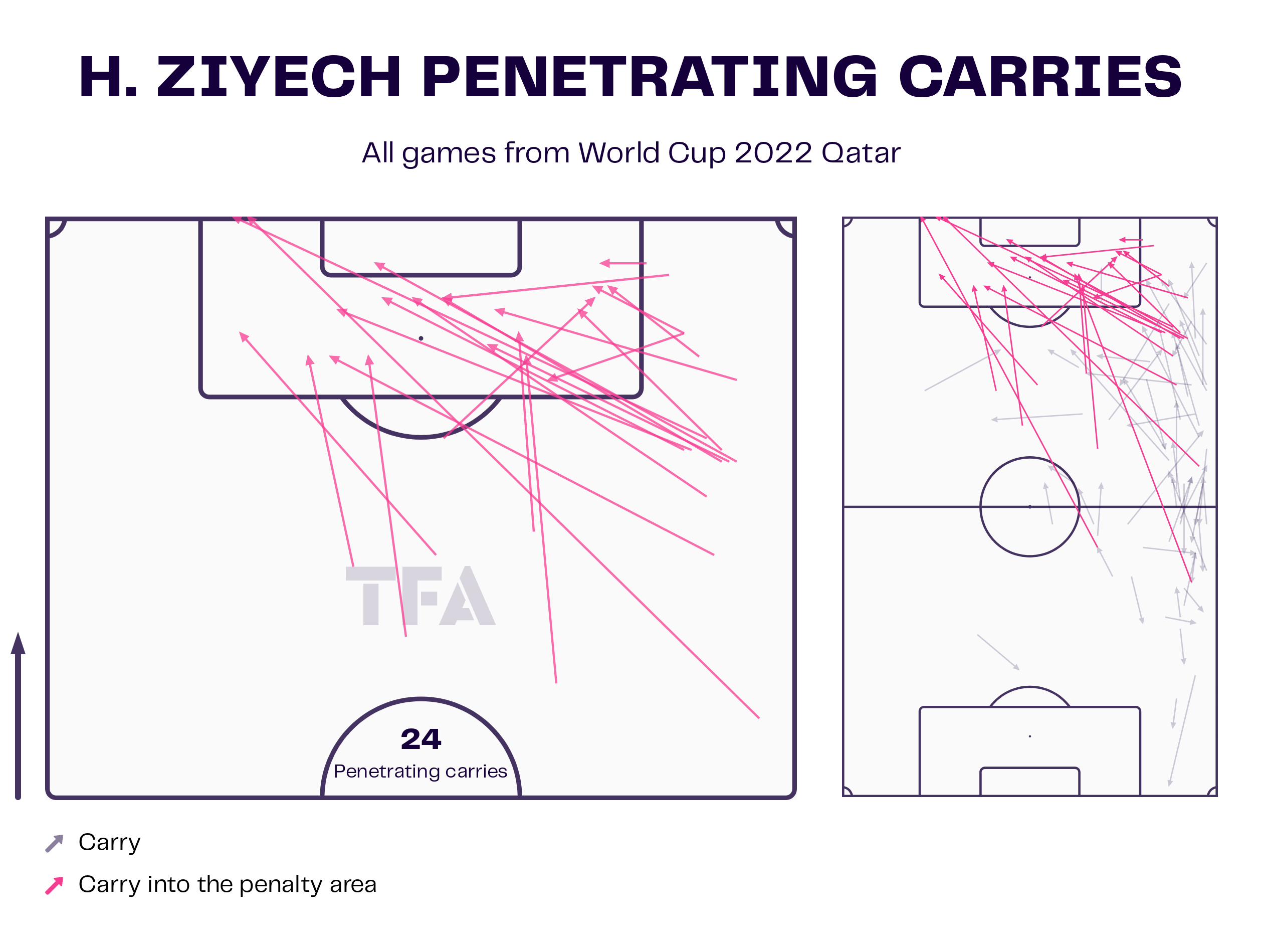 Hakim Ziyech was an instrumental player for Ajax and proved his worth as a player of many abilities in the form of skills and agility. He did the same for his nation this time around and showed many why he is still a player who can wreak havoc on the opposition’s defences. The above viz is a representation of penetrating carries made by the player in the world cup. He has made a total of 24 penetrating carries into the penalty box. The player has an average of 0.92 touches in the penalty area per 90. 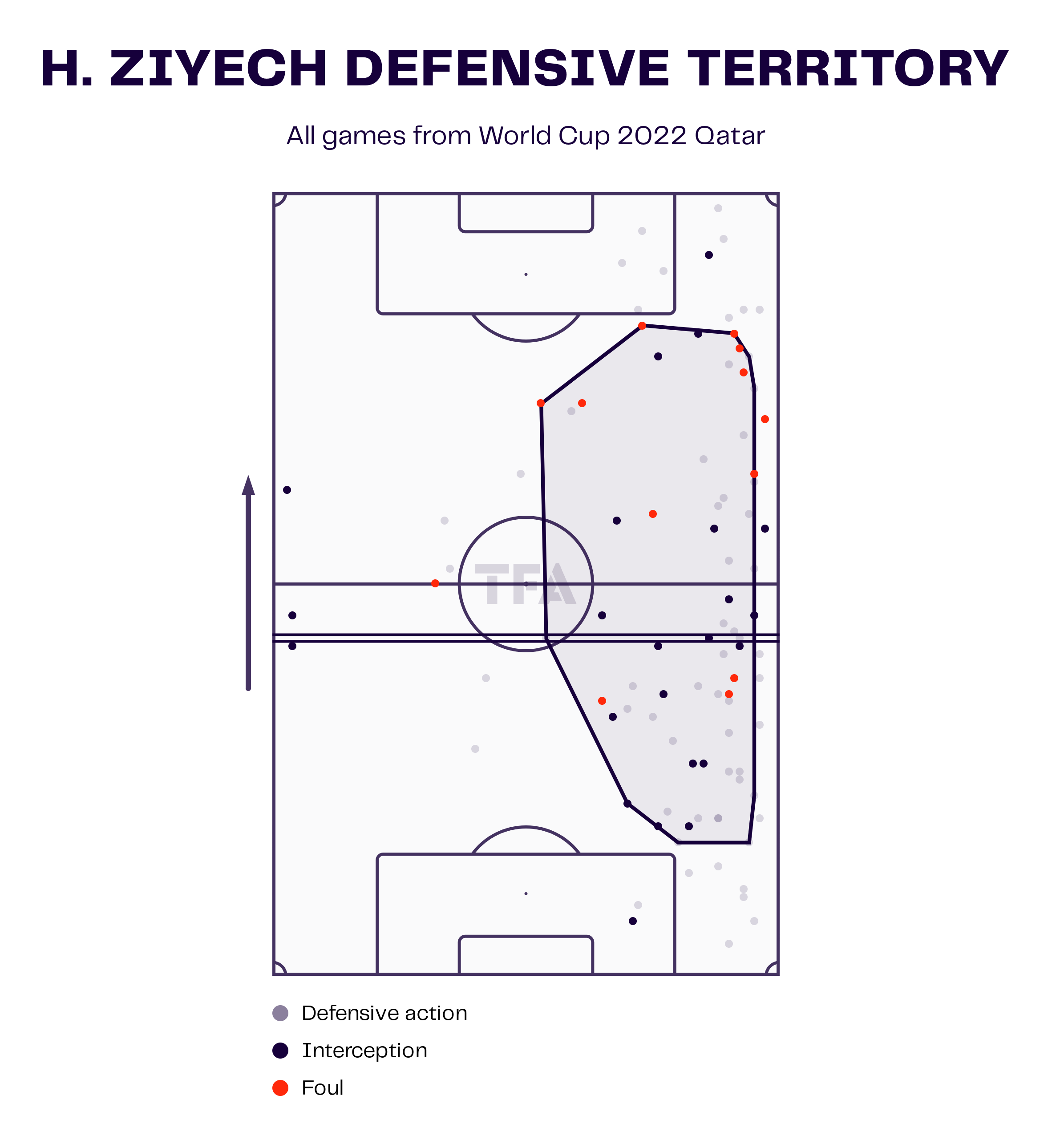 The above viz represents the defensive action made by Ziyecch in the world cup. He moves up and down the flank and has a good work rate. He has made interceptions in his own half as well as near the final third. He has 11.43 duels per 90 with a success rate of 37.9%. He has also given away a few fouls, averaging 1.3 fouls per match in the World Cup of 2022.

The Chelsea attacker is seemingly surplus to requirements at Stamford Bridge and could be allowed to leave in January. His creative abilities this World Cup have gained plenty of attention. It will be interesting to see which club signs him. A move to Ligue 1 may well be on the horizon, with Marseille being the possible destination.