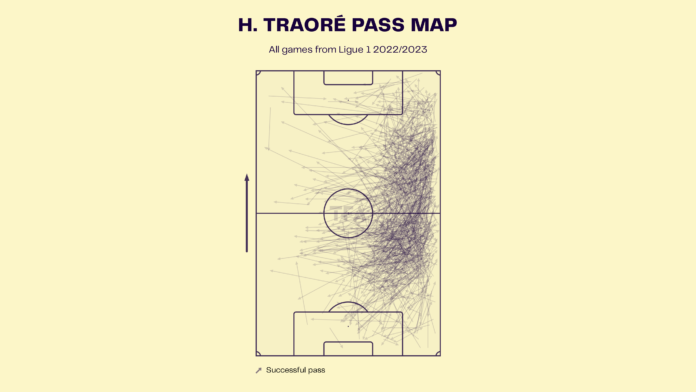 Hamari Traore is a Malian professional footballer who plays as a right-back for Ligue 1 club Rennes, of which he is the captain and the Mali national team. The Mali international has been one of Ligue 1’s best right-backs, at least since swapping Stade de Reims for Rennes in 2017. Since making the move, Traore has gone from strength to strength. He shone as Rennes beat PSG to the Coupe de France in 2019. Since then, he has enjoyed a ten-assist season in 2021/22. Traore has played more than 200 games for Rennes and is a huge asset to his side on both sides of the ball. The skipper struck the only goal of the game on matchday 19 against PSG at Rennes’ Roazhon Park. He led his team by example and gave an exceptional defensive display on the pitch, along with scoring the winner. In the 2022–23 French Ligue 1 season, Hamari Traore made 18 appearances. Below are some stats for Hamari from his current Ligue 1 campaign. 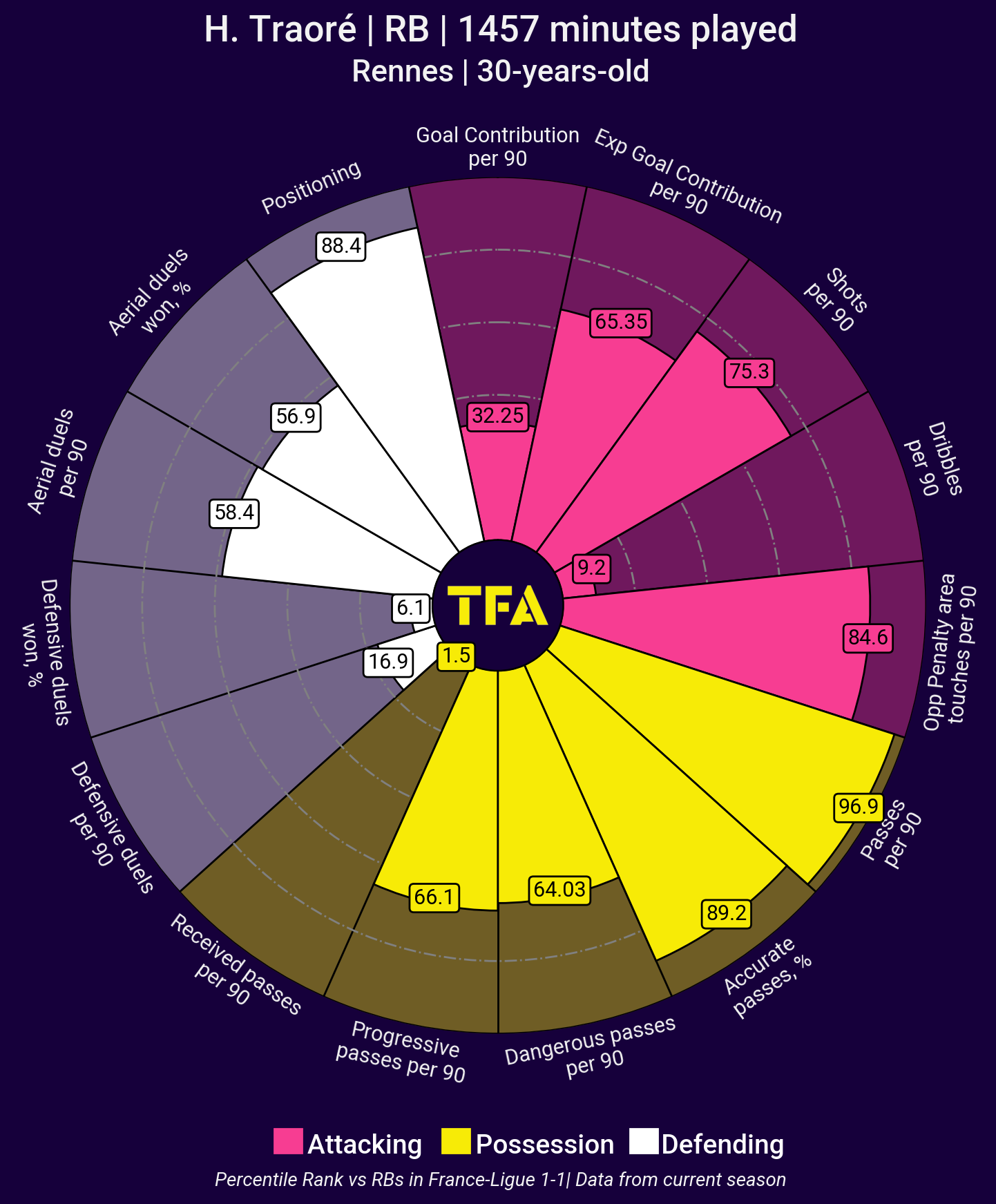 The above viz shows his percentile rank in comparison to the other right-backs in Ligue 1. Traore’s offensive capabilities have been a significant advantage for his team. He has efficient positioning and ranks among the top for passing abilities. As a right-back, he shines in aerial duels and is highly rated for his ability to move the ball around. He ranks highly for touches in the opposition’s penalty area. He ranks fairly well in most of the departments and has a complete profile, which rightfully sets him apart from his teammates. 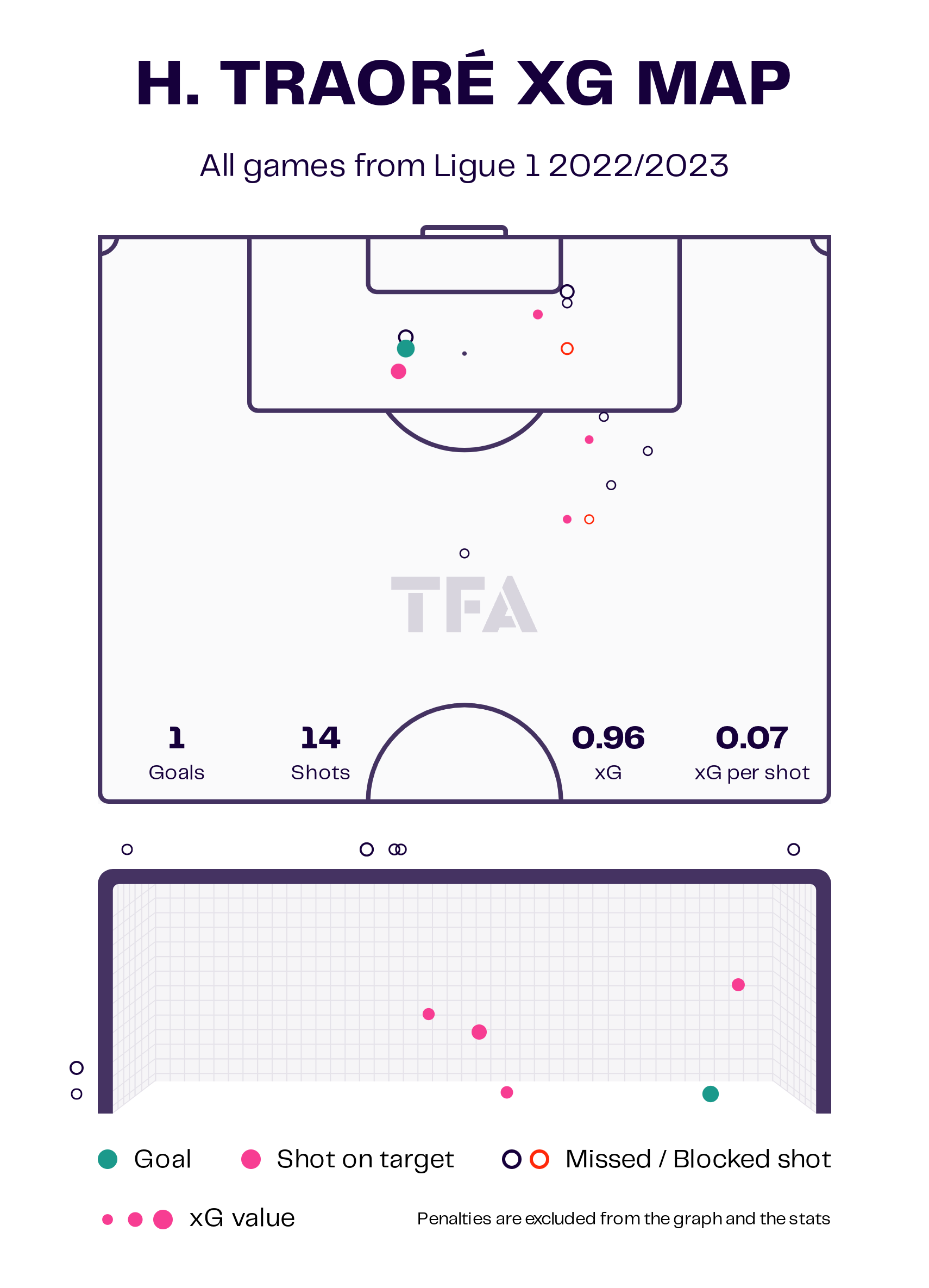 In the 2022–23 French Ligue 1 season, Hamari Traore has played 17 matches (plus one as a sub). He has five shots on target from a total of 14 shots and has scored one goal (0.71 xG). Although he has scored only one goal, Hamari shows intent to take a shot at goal, averaging 0.76 shots on goal per match. He puts plenty of intent behind his shots, which acts as an example for his teammates. As a right back, it is a rare skill to be able to find shots on target, which Hamari Traore possesses. 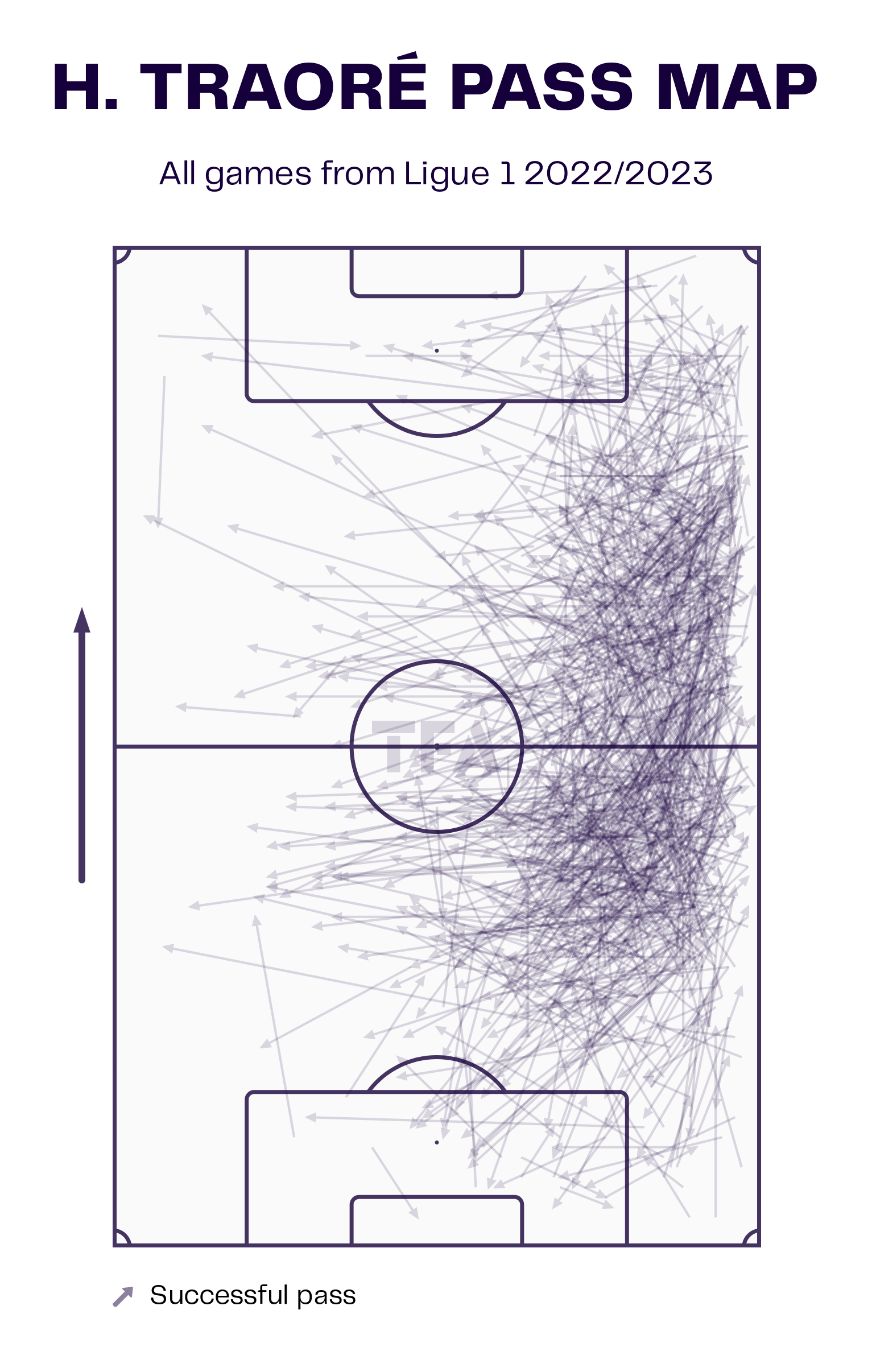 Traore covers the entire right flank of the pitch as a right-back. Looking at his passing aspect of the game, Hamari passes the ball roughly 57 times during a game with a pass completion rate of 87%. He also plays 7.8 passes to the final third each game, which leads to significant scoring chances. He has one assist so far this season and makes 2.4 passes into the penalty area on average. Overall, Traore’s xA output is 0.09 per 90 minutes. 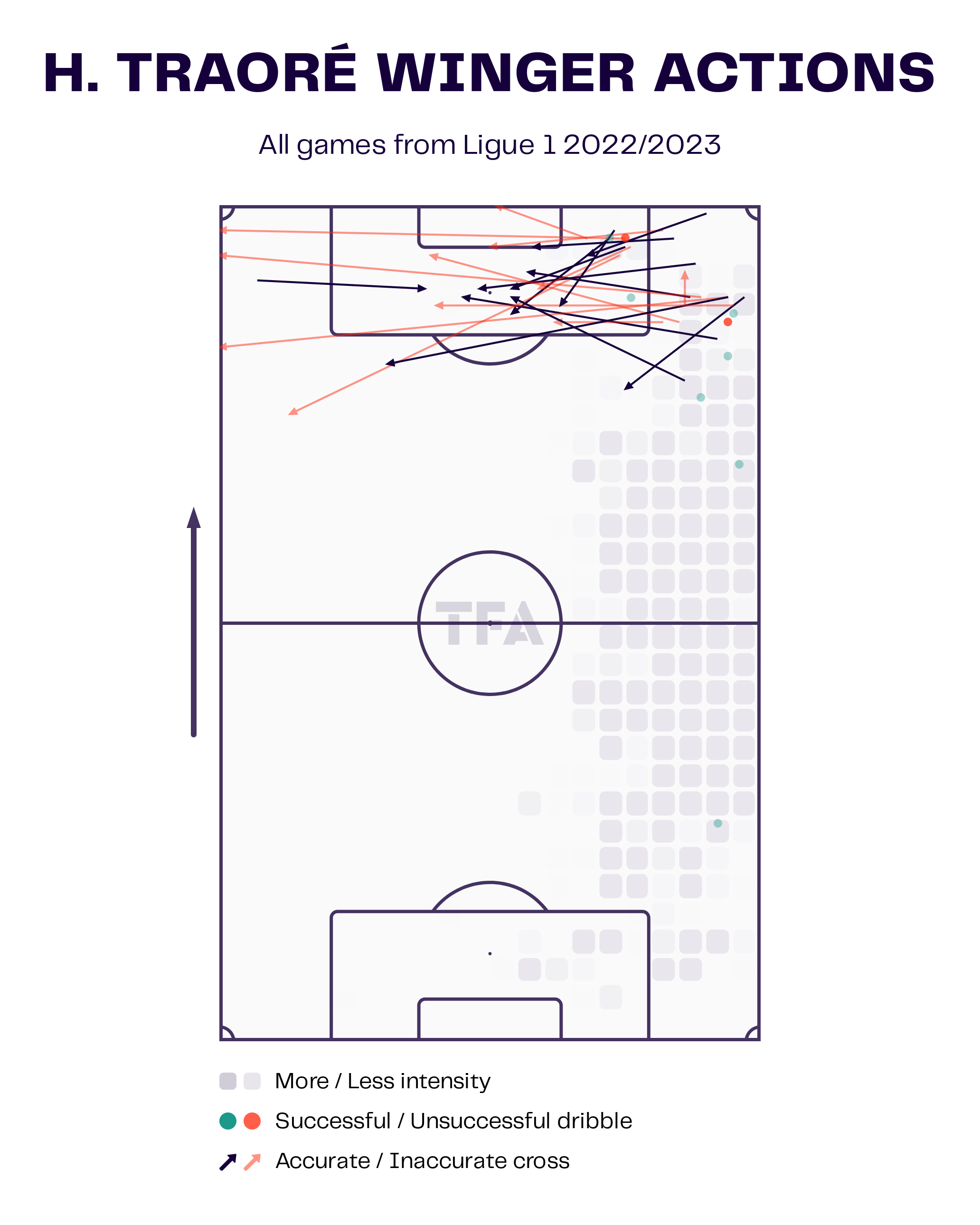 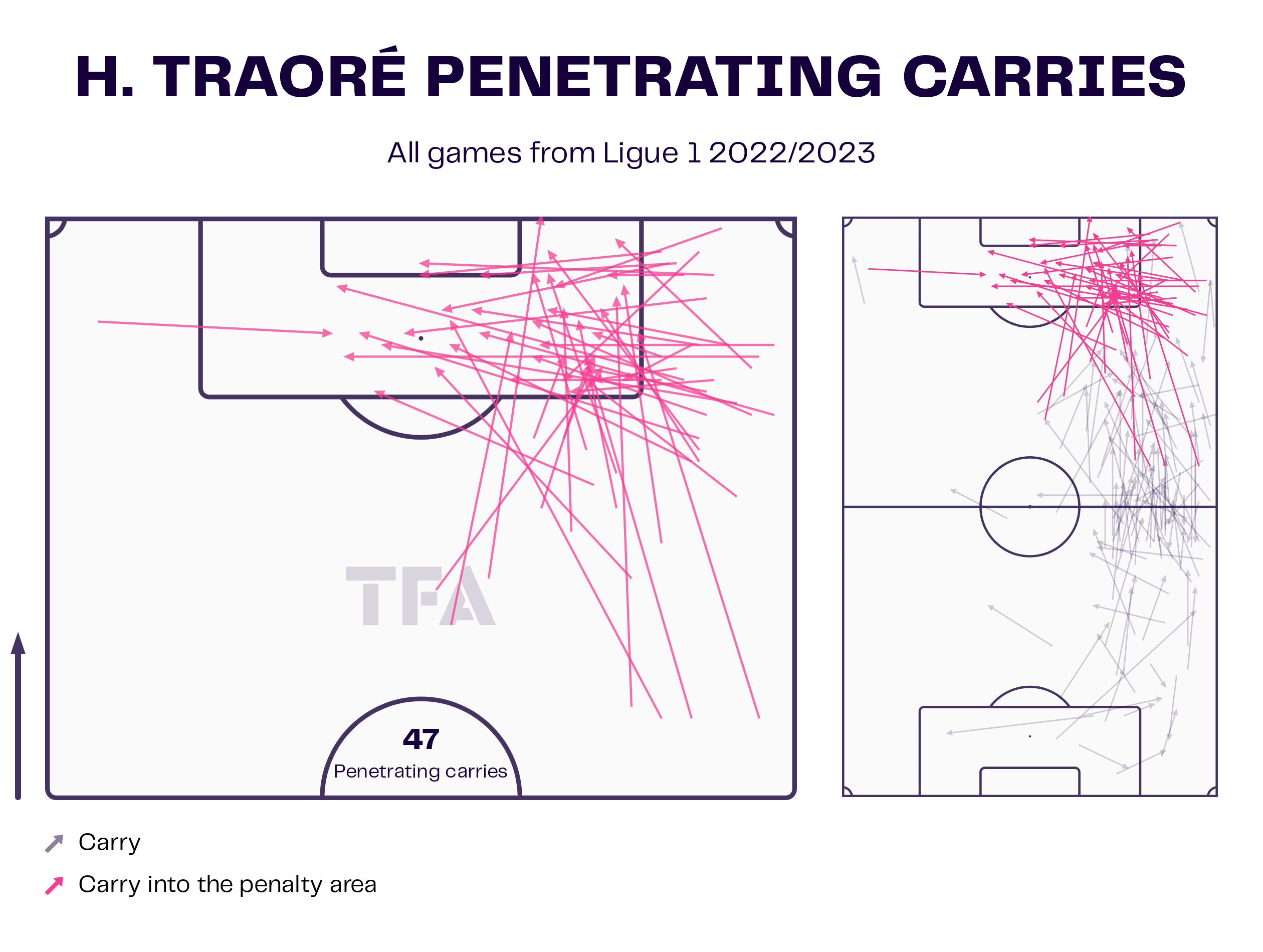 Hamari Traore is an experienced right-back, which makes him a very valuable asset for the team. He is extremely quick with the ball, which makes it difficult to keep up with him. His tendency to attempt dribbles in the final third causes damage to the opponent. Traore tends to either cut inside or send in a deep or even a short cross into the box. The above viz shows his winger actions in Ligue 1 in 2022/23. It can be observed that most of his intensity is on the right flank of the middle and final third. The number of successful dribbles on the right flank of the final third is very high. His tendency to take frequent crosses and his ability to deliver them accurately is also demonstrated, and he makes 2.29 accurate crosses on average. Traore has made 47 penetrating carries so far this season and makes 1.69 progressive runs per 90. 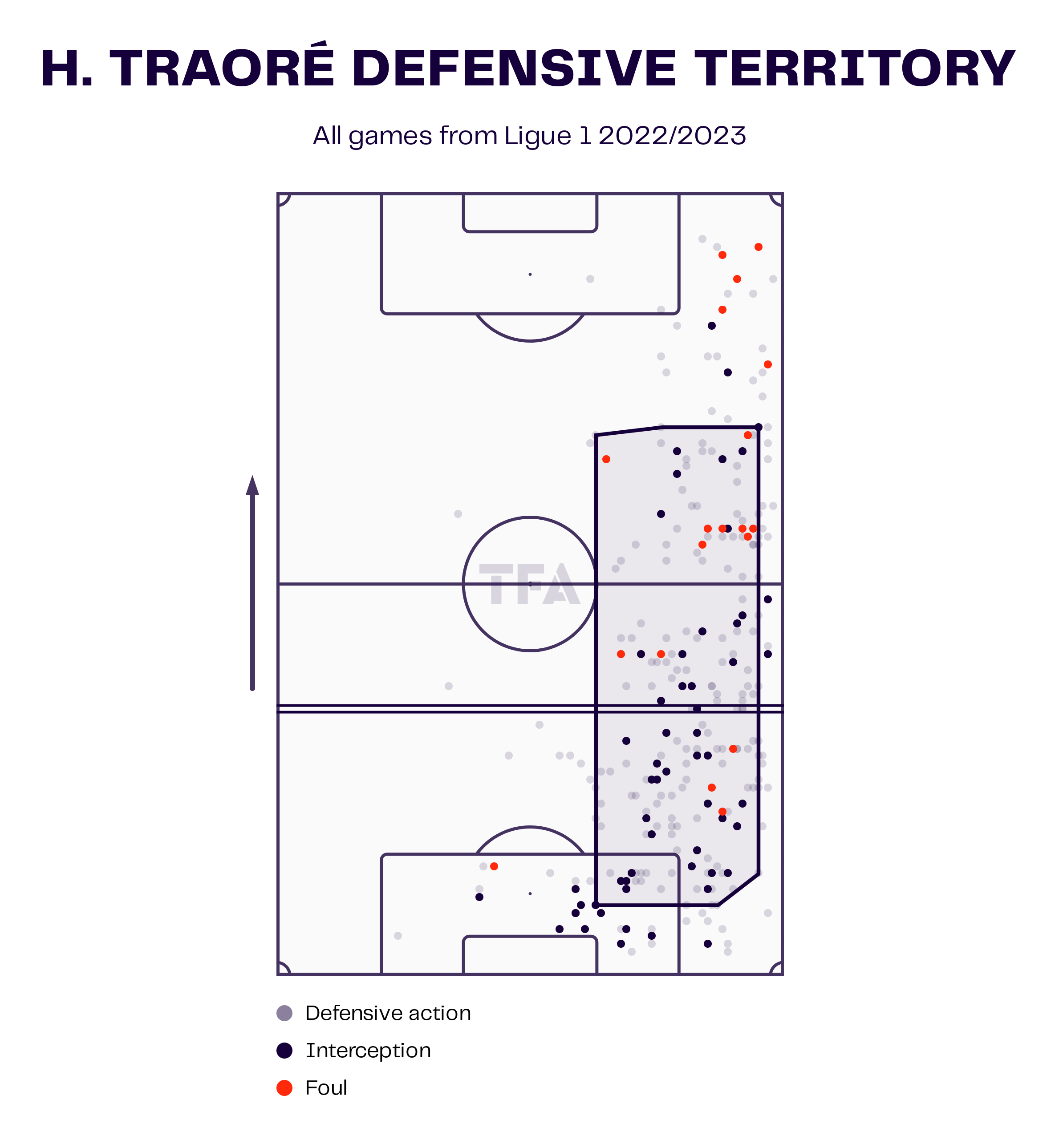 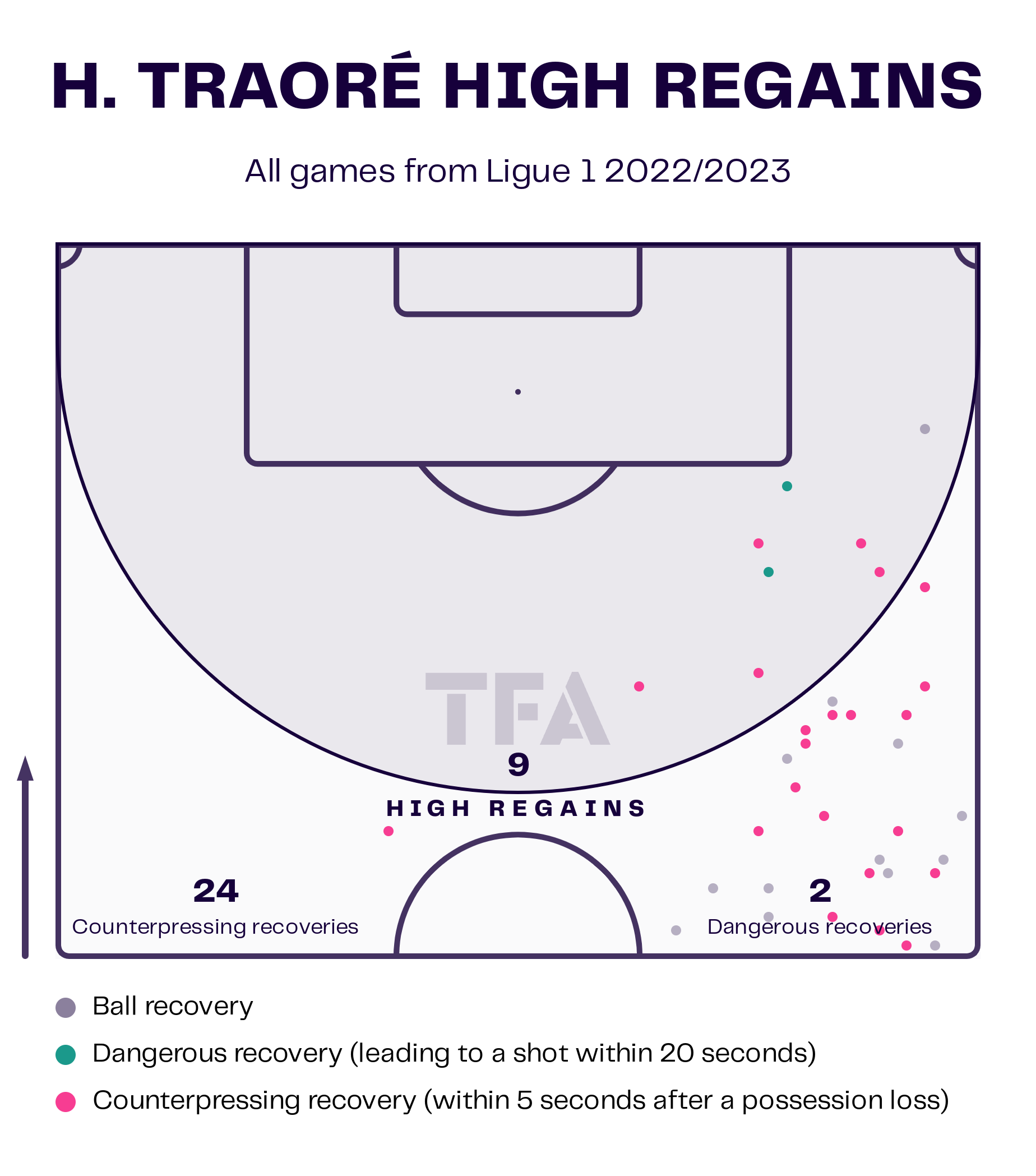 Overall, Traoré is a huge asset to his side on both sides of the ball. His turn of pace and reading of the game help him snuff out opposition attacks quickly, but he is also adept at getting forward down the right flank. His overall tendencies make him the right fit as Rennes’ skipper as well as the right-back who does it all for the team. He is leading Rennes’ charge for a European spot, as the team currently sits in fifth place.

Under the microscope: How Rennes’ impressive attacking stats could take them...