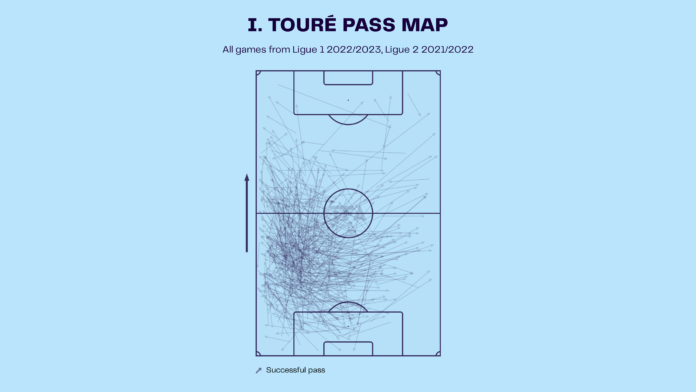 Isaak Toure is a French professional footballer who plays as a defender for Ligue 1 club Marseille. Isaak Toure joined Marseille in the summer for €5.5 million, turning down a substantial offer from English Premier League giants Manchester City in favour of a 5-year contract in France. Isaak Touré has only made five appearances thus far this season, being played more often than not out of position in the wing-back position by manager Igor Tudor. In his five appearances, he has performed exceptionally well for a young centre-back. In all, he has only played a total of 65 minutes in the top flight this season.

Thus, Marseille are looking for a loan deal to see the player receive more game time at what is a vital stage of his development at the age of 19. Auxerre of Ligue 1 is one of the potential suitors. Toure has impressed in Ligue 1 this season and has proven his worth to play in France’s top flight.

Let’s now look at some of the stats for Isaak for his current and previous seasons in French football. 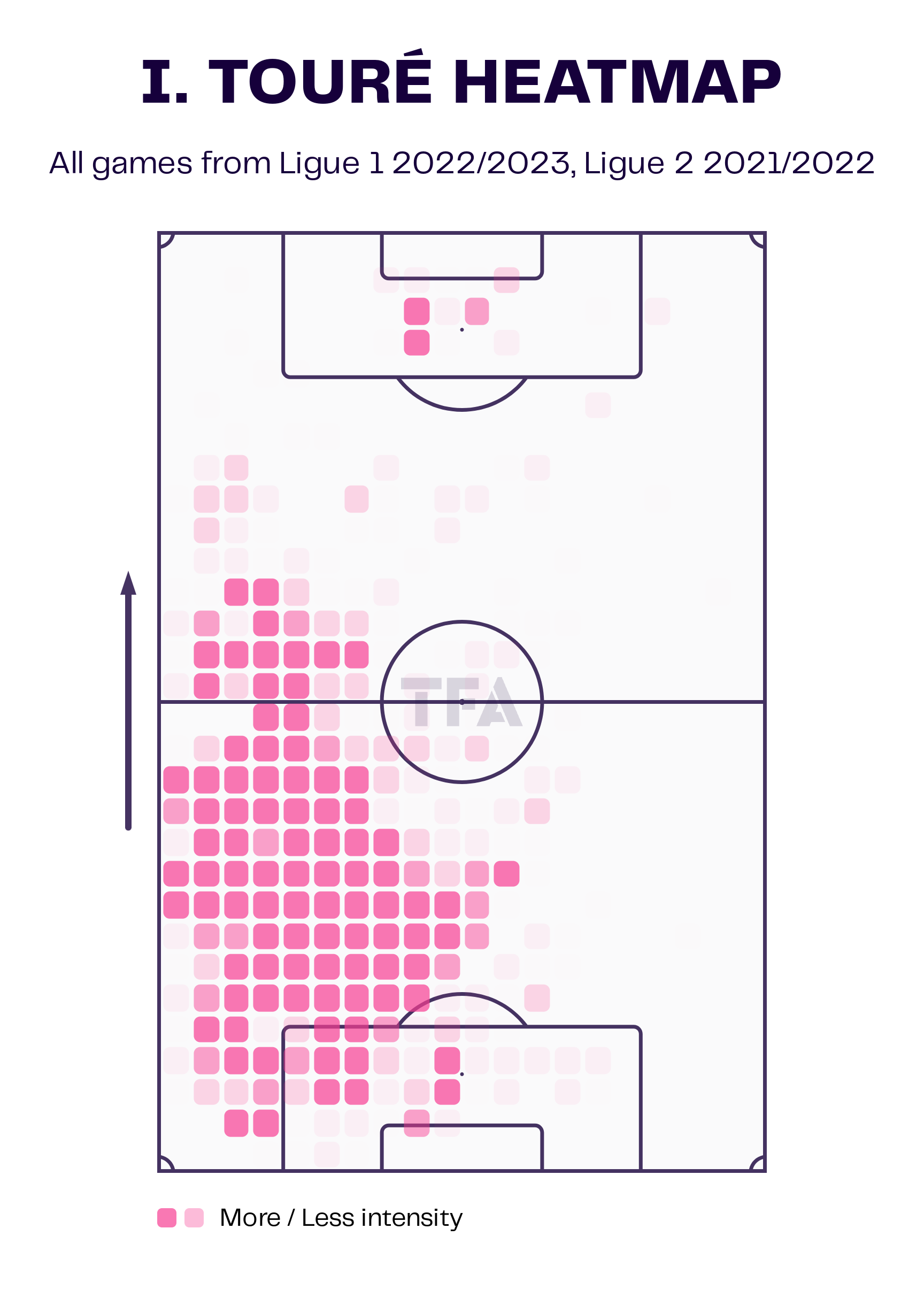 Isaak Toure is a centre-back who prefers to play on the left side. Most of his playing intensity comes in the defensive and middle thirds of the pitch. Auxerre is a team that tends to sit back while defending and play man-to-man at the back. His young age means that he possesses the physical requirements to push through entire games against possession-dominant teams. We will now look at his passing stats and abilities, which can be an advantage to Auxerre. 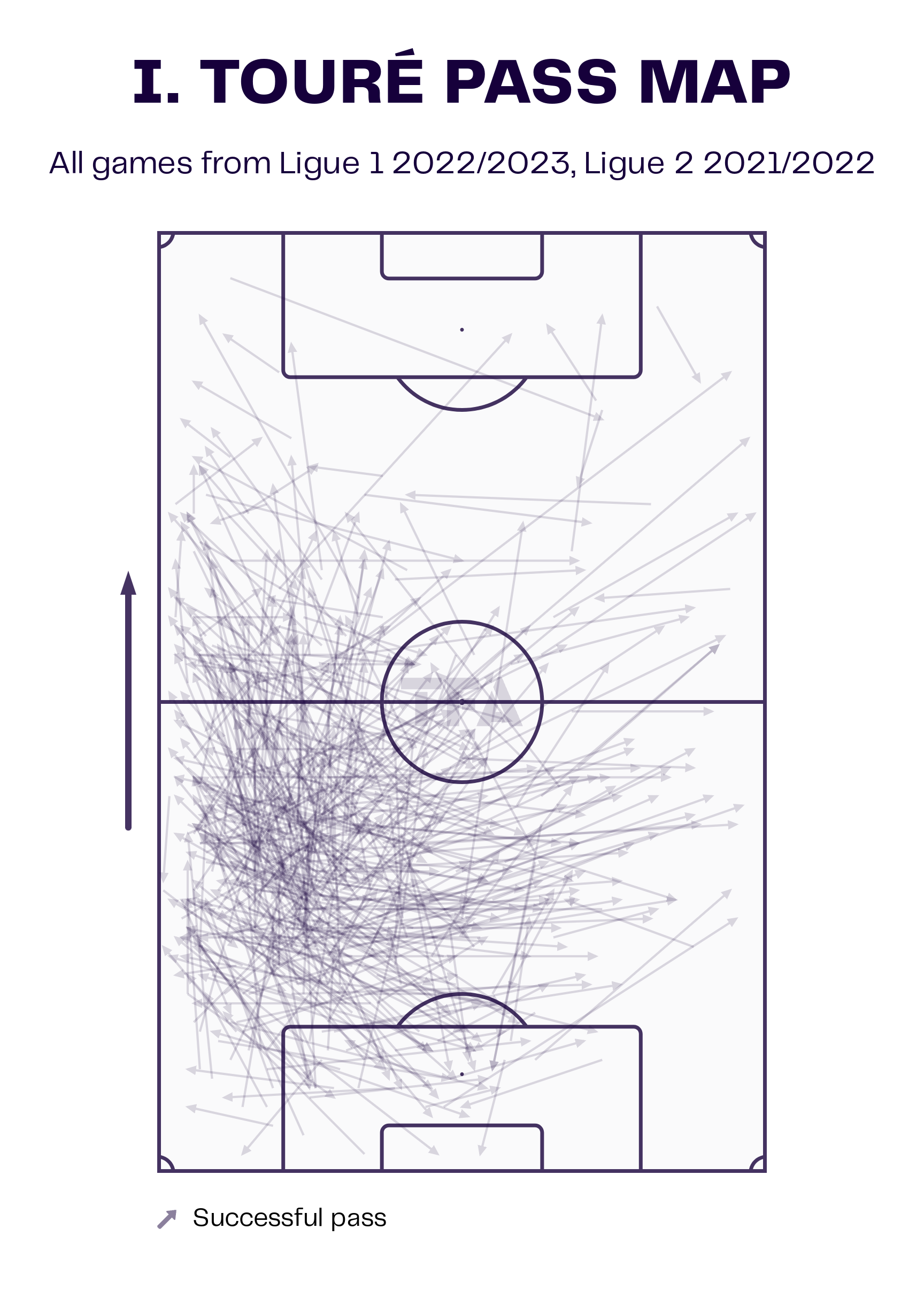 The above viz is a representation of the passes made by the player. It can be seen that most of his work rate is again on the left side of the defence and in the middle third of the pitch. The player makes 45.08 passes per 90 with 89% accuracy. Additionally, he makes 3.9 passes into the final third on average. Isaak makes 19 forward passes with 81% accuracy per 90 minutes. Isaak possesses fine passing ability in terms of passes attempted and pass accuracy. He provides a trustworthy option in defence at a young age and tends to show maturity on the pitch beyond his years. 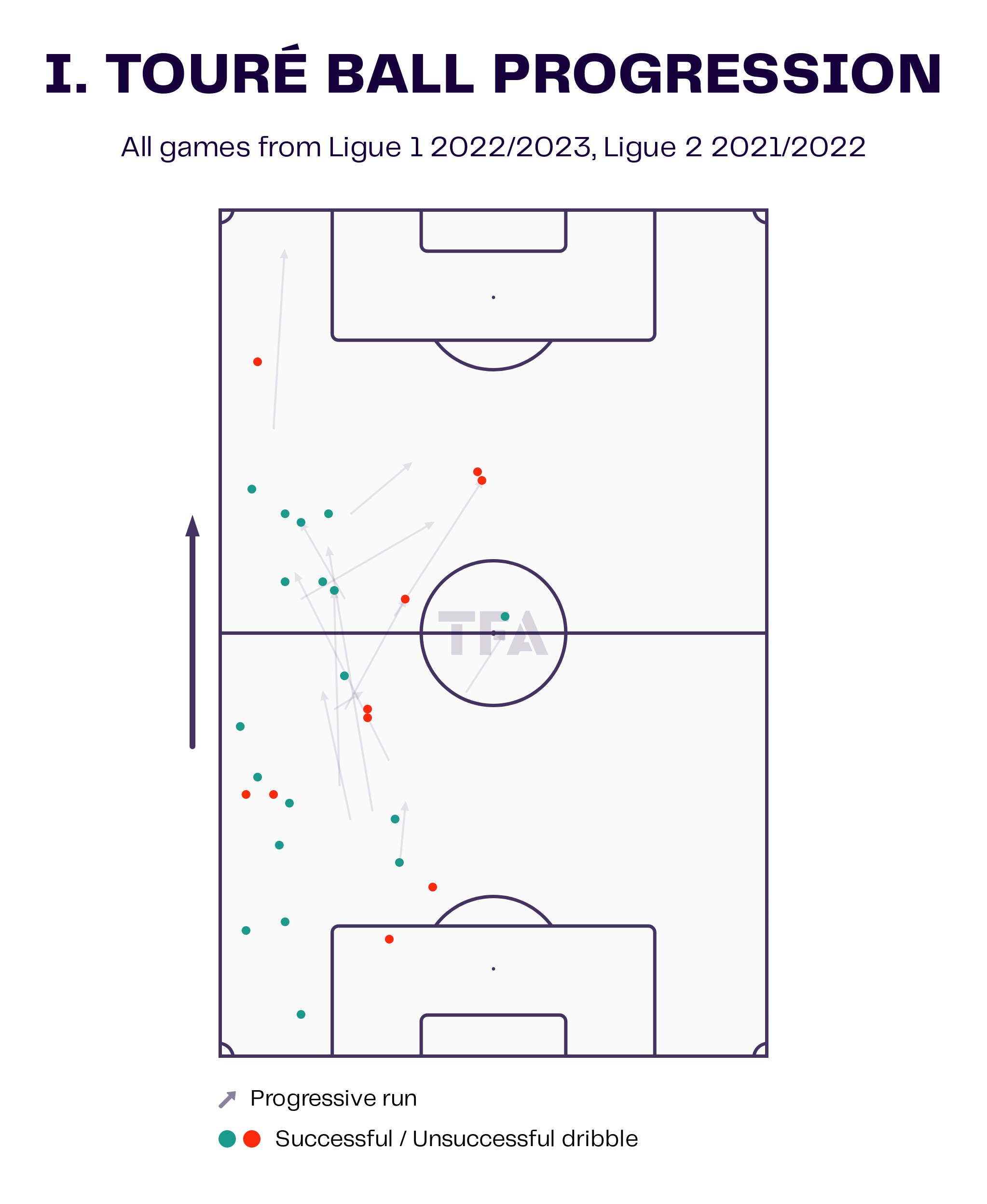 The above viz displays the player’s ball progression map along with successful and unsuccessful dribbles attempted. Isaak makes 2.97 dribbles with a 66.7% success rate per 90. Most of his attempts have come in the defensive third, along with a few successful attempts in the middle third. Being a young player, he is full of confidence and does not hold back to push upward while facing the opposition. 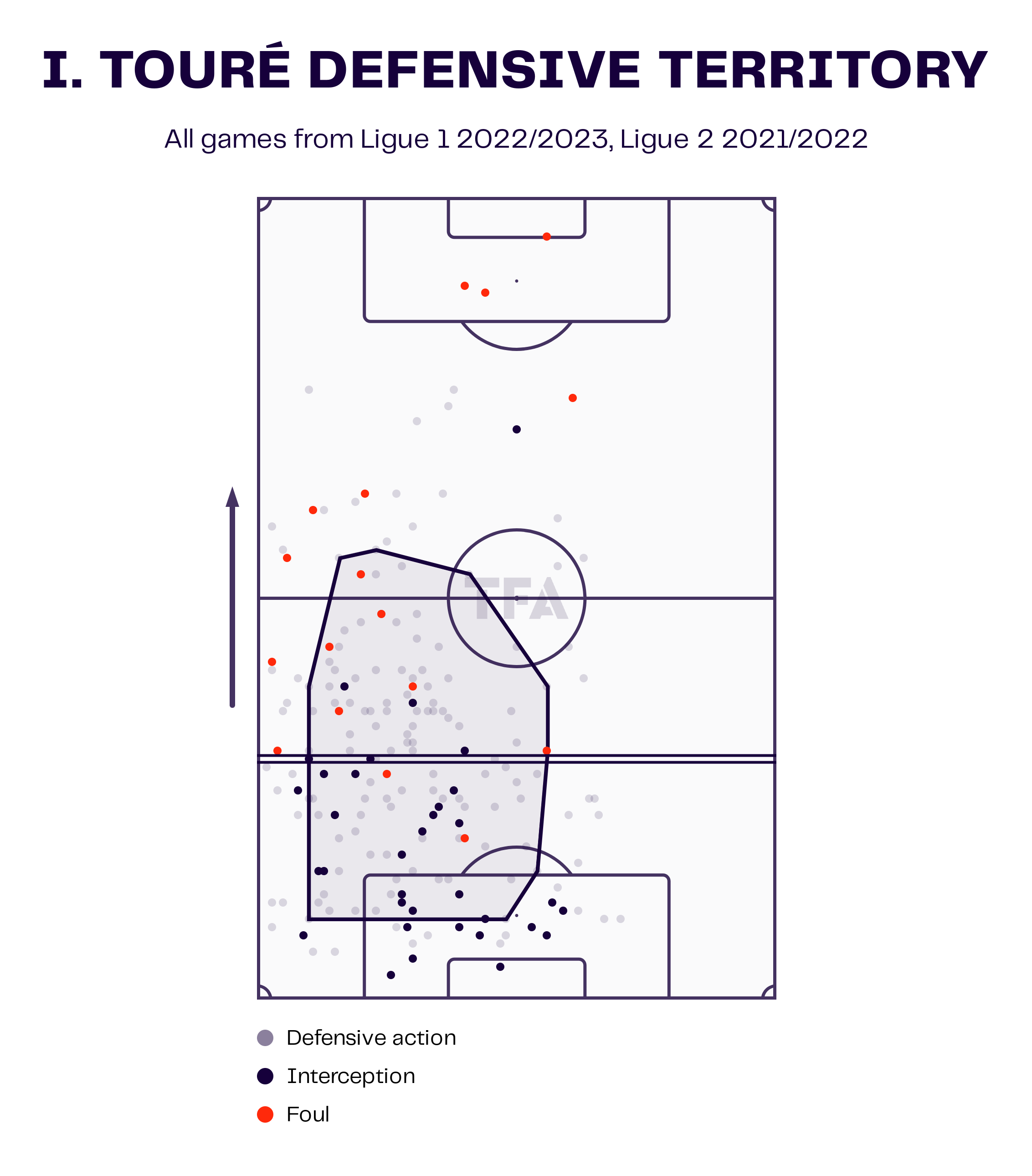 Isaak Toure is a versatile player and, due to his young age, adapts quickly to various positions in defence mainly at centre back and full back. He has been used as a left-back by his manager in certain matches in Ligue 1. The above viz shows the defensive territory of the player. Isaak makes 4.67 interceptions per 90, with most of them inside his own box and the defensive third. He competes in 4.7 defensive duels and 3.7 aerial duels per 90, with a success rate of 64.8% and 58.7%, respectively. Additionally, the player makes 9.89 recoveries in the opposition’s half on average. 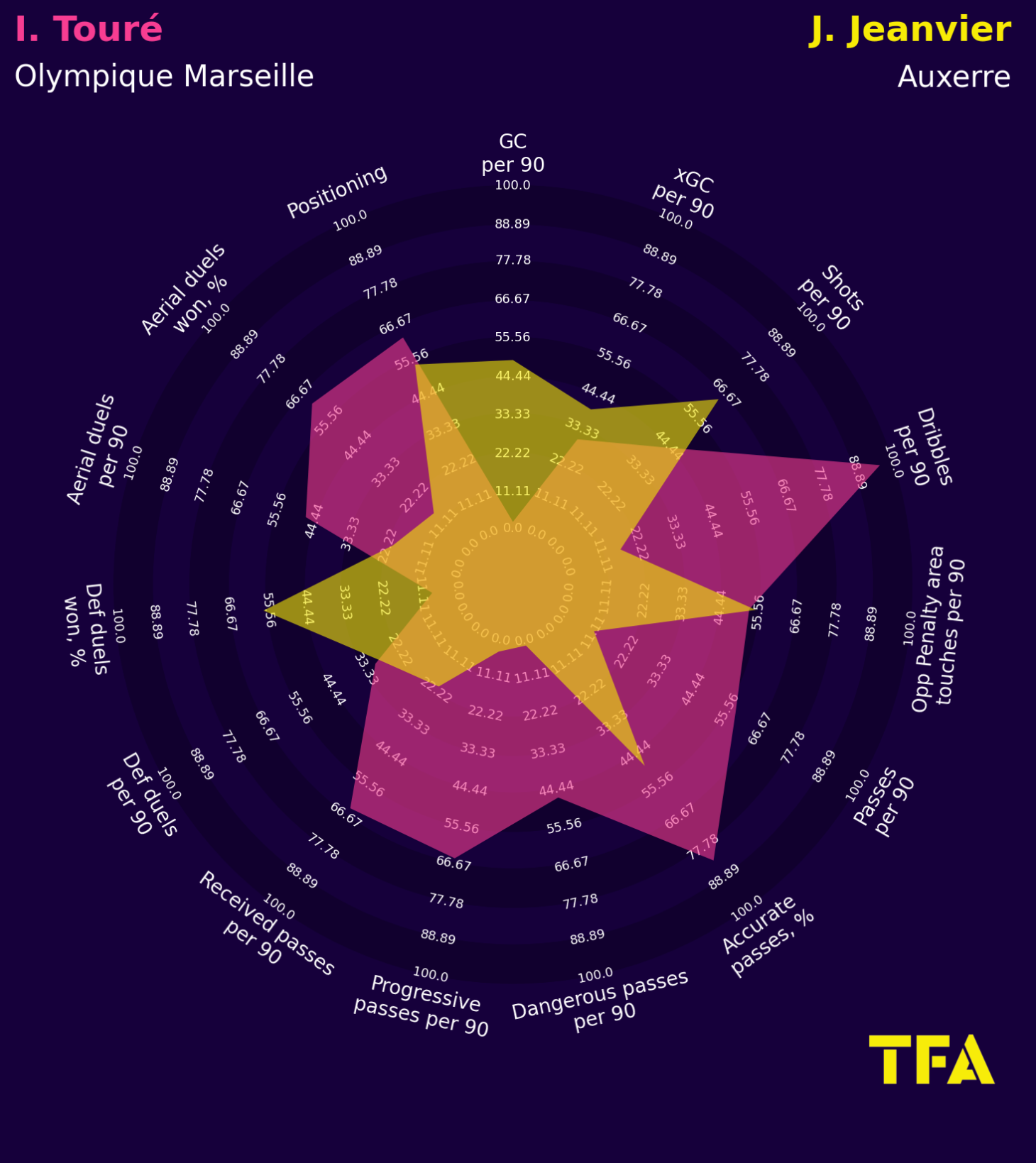 The above viz is a comparison between Toure and Jeanvier. Currently, 30-year-old Julian Jeanvier plays as a central defender for Auxerre. It can be seen that Toure has better numbers compared to Jeanvier in most of the stats. Given the age of Toure and the amount of potential he possesses, he will serve as the perfect replacement for Jeanvier in the Auxerre backline.

Overall, Isaakk Toure is on the outlook for more playing time, and joining Auxerre will be the most suitable option for the player. Both the team and the player are compatible with each other, and Auxerre may be the best destination for Toure. The young age, high versatility, and maturity on the pitch possessed by Isaak Toure are the perfect combination for both Isaak and Auxerre.

Under the microscope: How has Marseille picked up the pace in...

Under the microscope: How Jonathan David has been a one-man army...