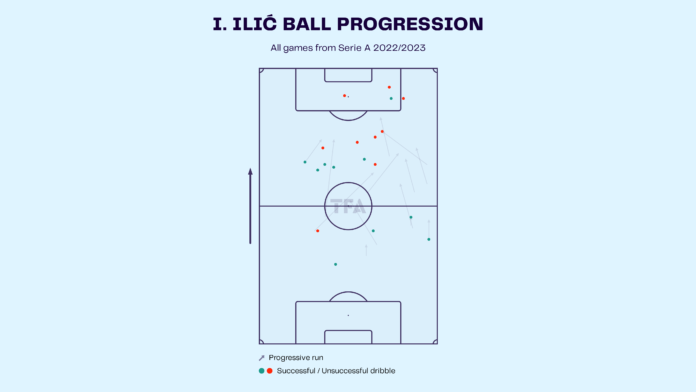 Ivan Ilic is a Serbian professional footballer who plays as a midfielder for Serie A club Hellas Verona. Ilic has many eyes on him this summer, with the likes of Premier League and Serie A clubs already interested in the player. Ilic was a young player at Manchester City, and Ilic was a talent as a kid. Now a regular in Serie A and for his country, Ilic is growing into a quality player. The Serbian defensive midfielder Ilic, who represented his country at the World Cup, is only 21 years old and has a long way to go.

French Ligue 1 side Marseille are interested in his profile, and Igor Tudor wants to reunite with him after having him under his orders last season. The Champions League spot contenders are looking to reinforce this winter, having already brought in Ruslan Malinovskyi. Ilic can provide the necessary intensity in the middle of the pitch due to his agility. He is mature, and his awareness of how to read the game effectively has been an advantage for him. Below, we look at some of his stats from Serie A. 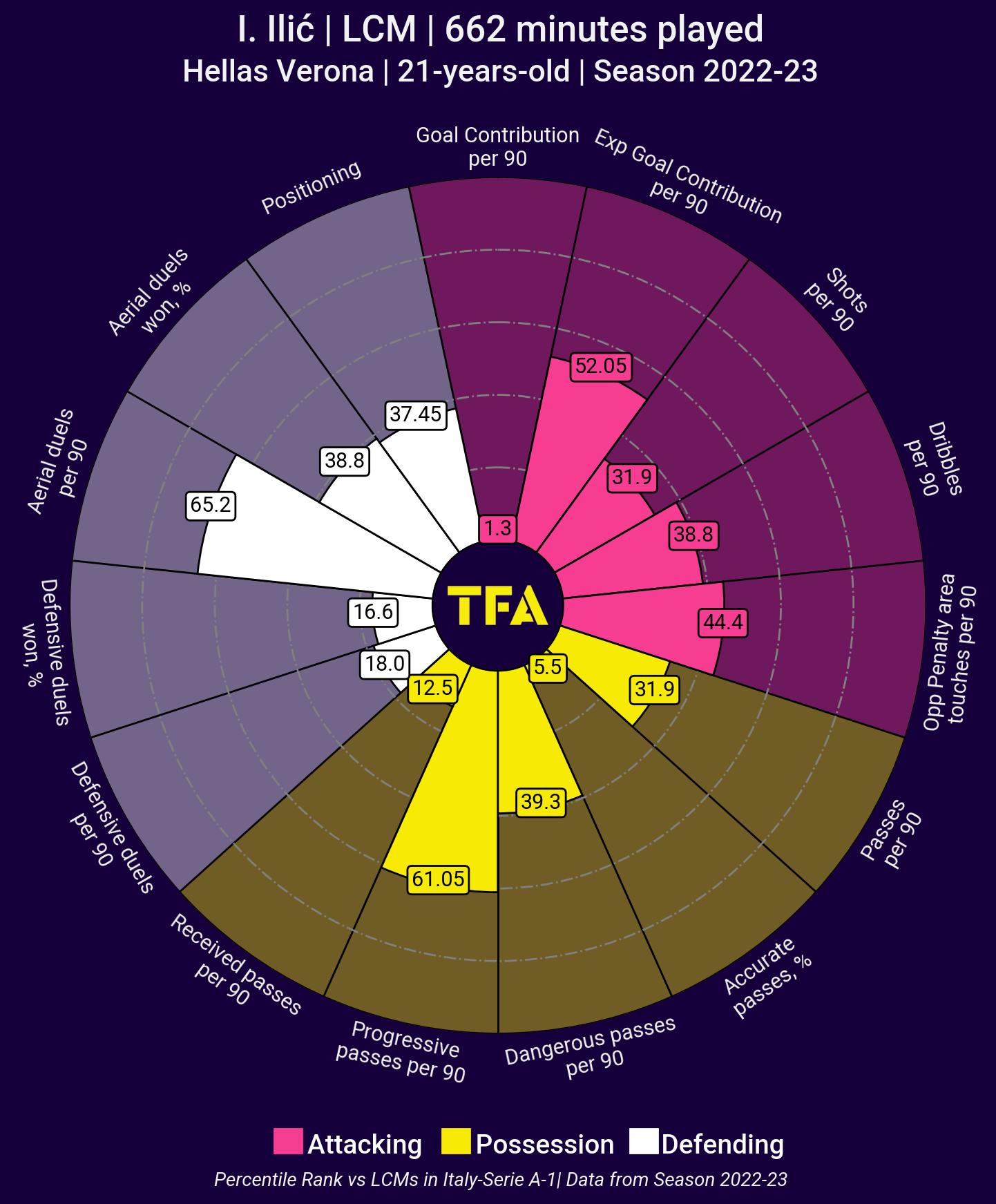 The above viz shows Ivan’s percentile rank compared to the other central midfielders in Serie A in 2022/23. Ilic has played 11 matches in the 2022/23 Serie A season. He is ranked highly for contesting aerial duels. The player’s ability to attack has been decent, with a fair number of expected goal contributions. He ranks well in passing ability. Ivan’s overall numbers are decent in the league, and he ranks average in most of the stats. One of the reasons behind it being less amount of playing time.

Ilic in Serie A last season 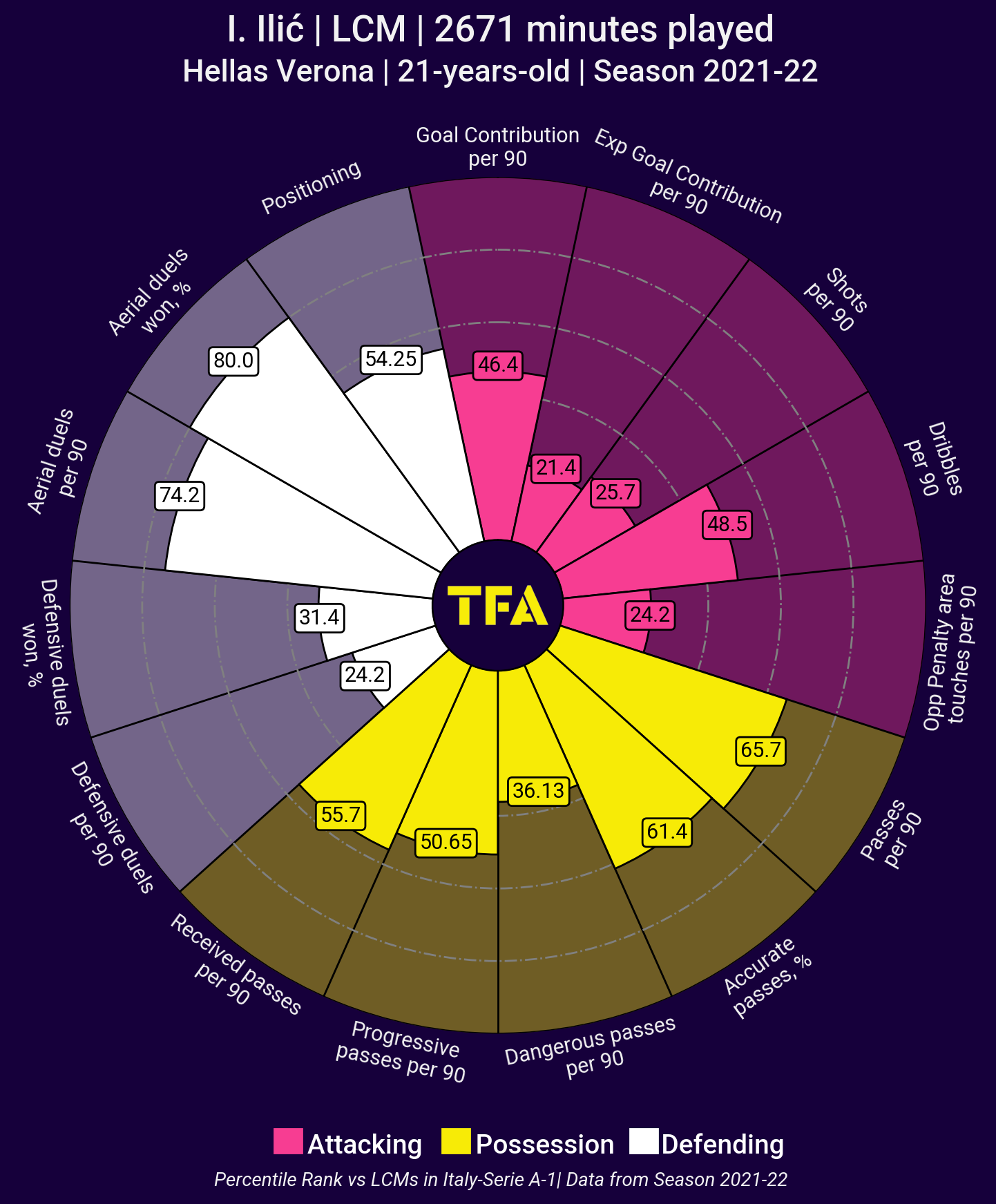 It can be seen that in the 2021/22 season, Ilic saw much more playing time for Hellas Verona and ranked well as compared to other midfielders. He appeared in 32 matches for Verona in the 2021/22 Serie A season. He ranked well for winning aerial duels. He has also maintained decent possession stats. One of the major differences between the two seasons is seen in his expected goal contributions. Ilic has been able to contribute more offensively to the team in recent seasons.

In front of the goal 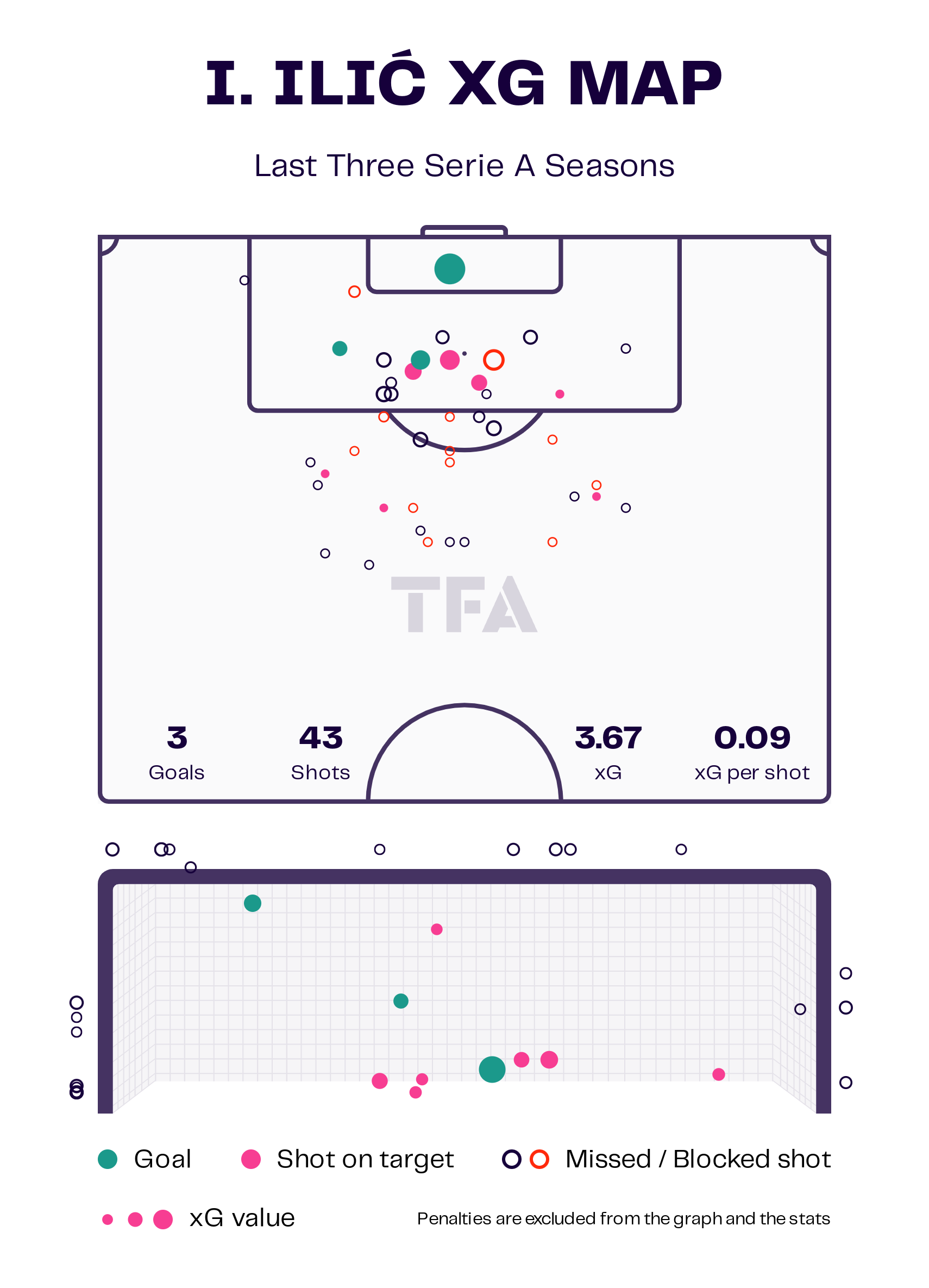 Ivan Ilic has scored three goals from 43 shots for Hellas Verona in Serie A over all his seasons with the club. Overall, his goals scored per 90 minutes are 0.09. Moreover, Ivan has provided five assists in this period. He has been more of a holding midfielder who plays box-to-box and gives the team support and composure. He has an overall xG of 3.67 and has attempted shots on target from outside the box on a couple of occasions. He takes 0.7 shots per 90 with 25% accuracy in Serie A. 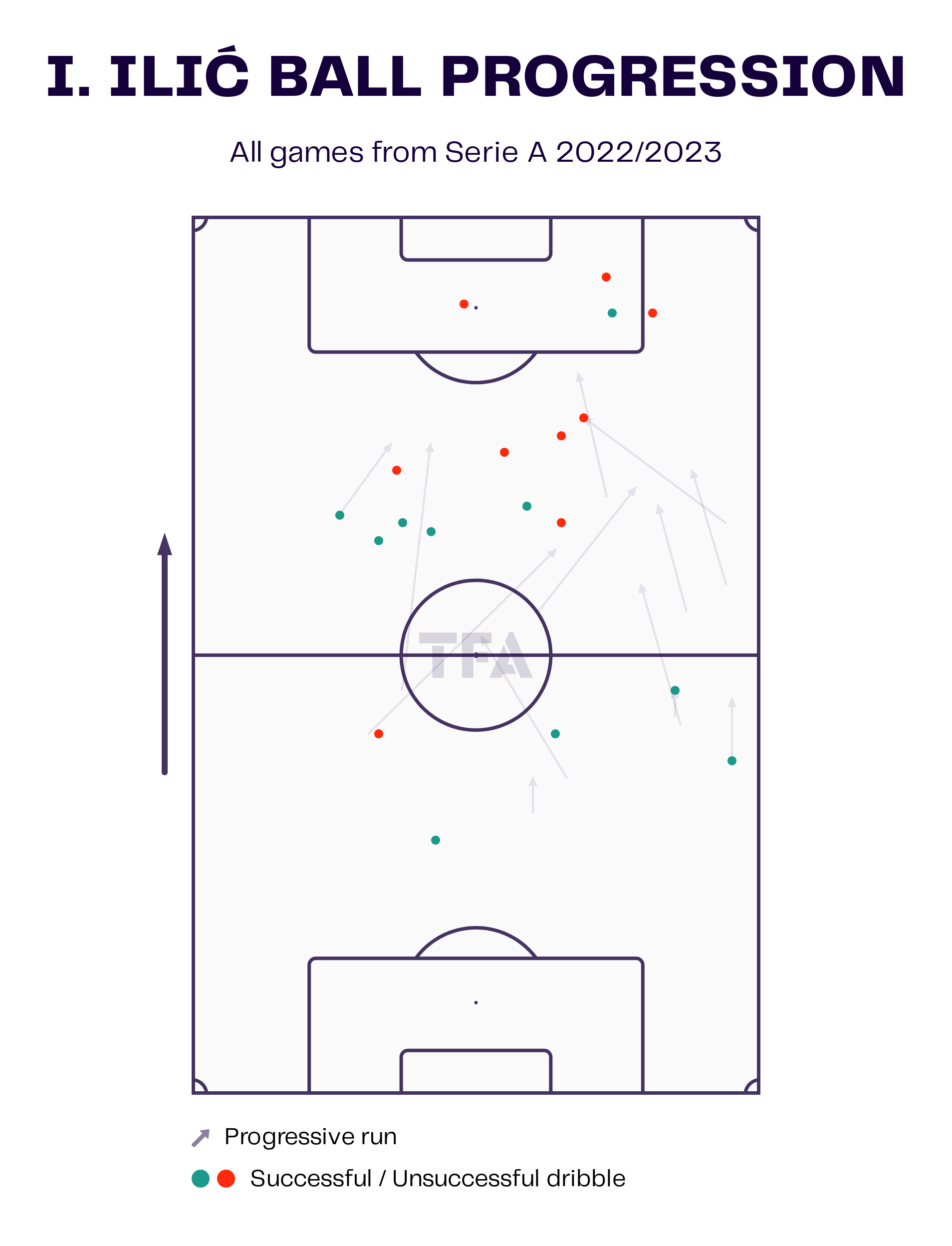 Ilic likes to play possession football through the middle of the pitch. He attempts 1.84 dribbles per match, with 52.6% of them being successful. Most of his action is in the middle and final third of the pitch. His confidence and ability to keep hold of the ball are what make him worth more and are one of the reasons behind his success. He averages 1.26 progressive runs per match and makes penetrating carries into the penalty area, averaging 0.97 touches in the opponent’s penalty area. 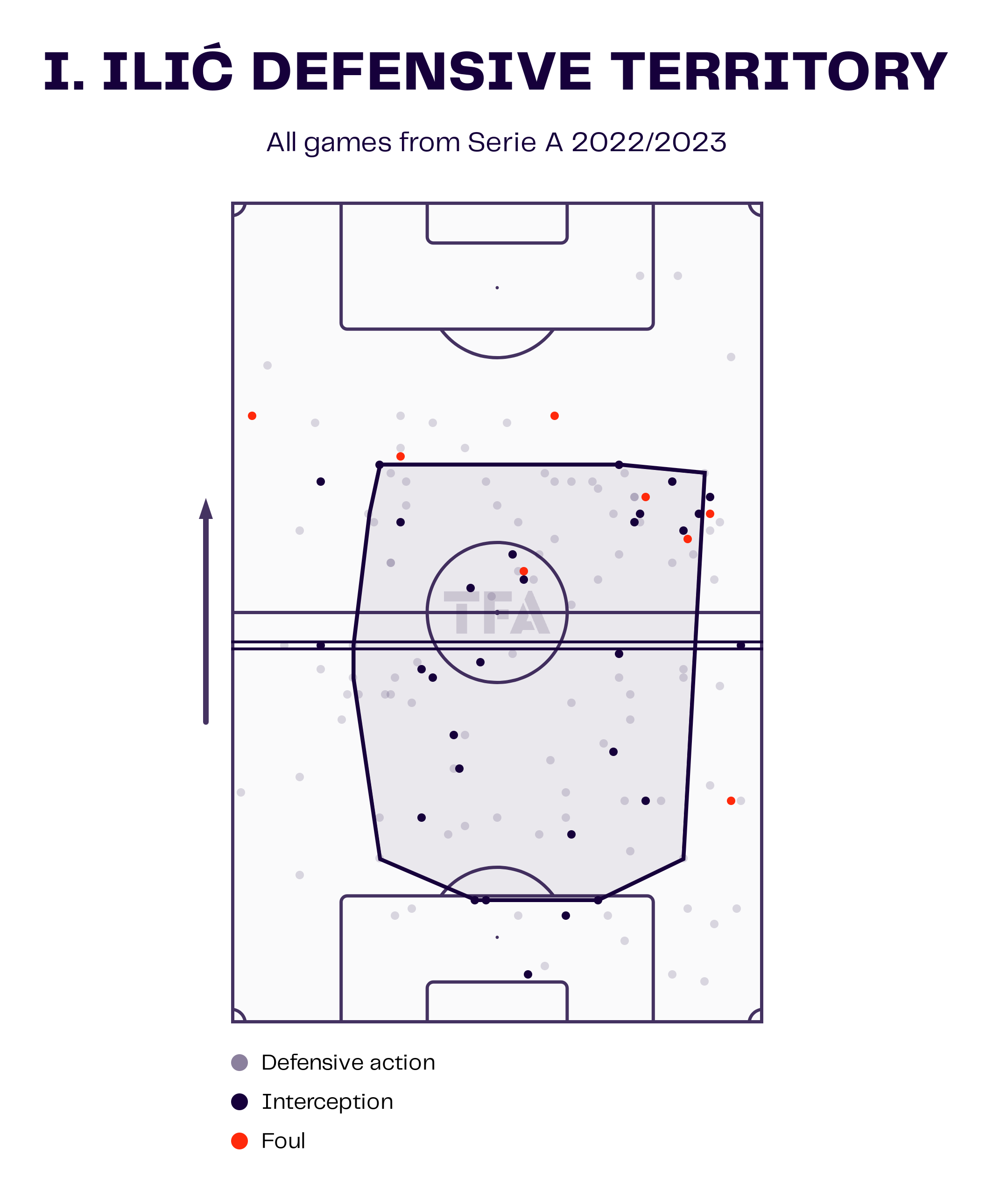 The above viz shows the defensive territory and various high regains of the player for Hellas Verona in Serie A 2022/23. It indicates that Ivan is involved in a lot of defensive actions in the defensive third and makes interceptions near the defensive and middle thirds. It can be observed that the player has not given up many fouls and has averaged only 0.78 fouls in the current season. Overall, he has an average of 14.27 duels per 90 and a 45.6% win rate. Ilic averages 4.56 interceptions per 90 minutes and makes a lot of movement in the opposition’s half in order to put high pressure on the opposition’s midfield and final third. He makes 9.13 successful recoveries in the opposition’s half per 90. 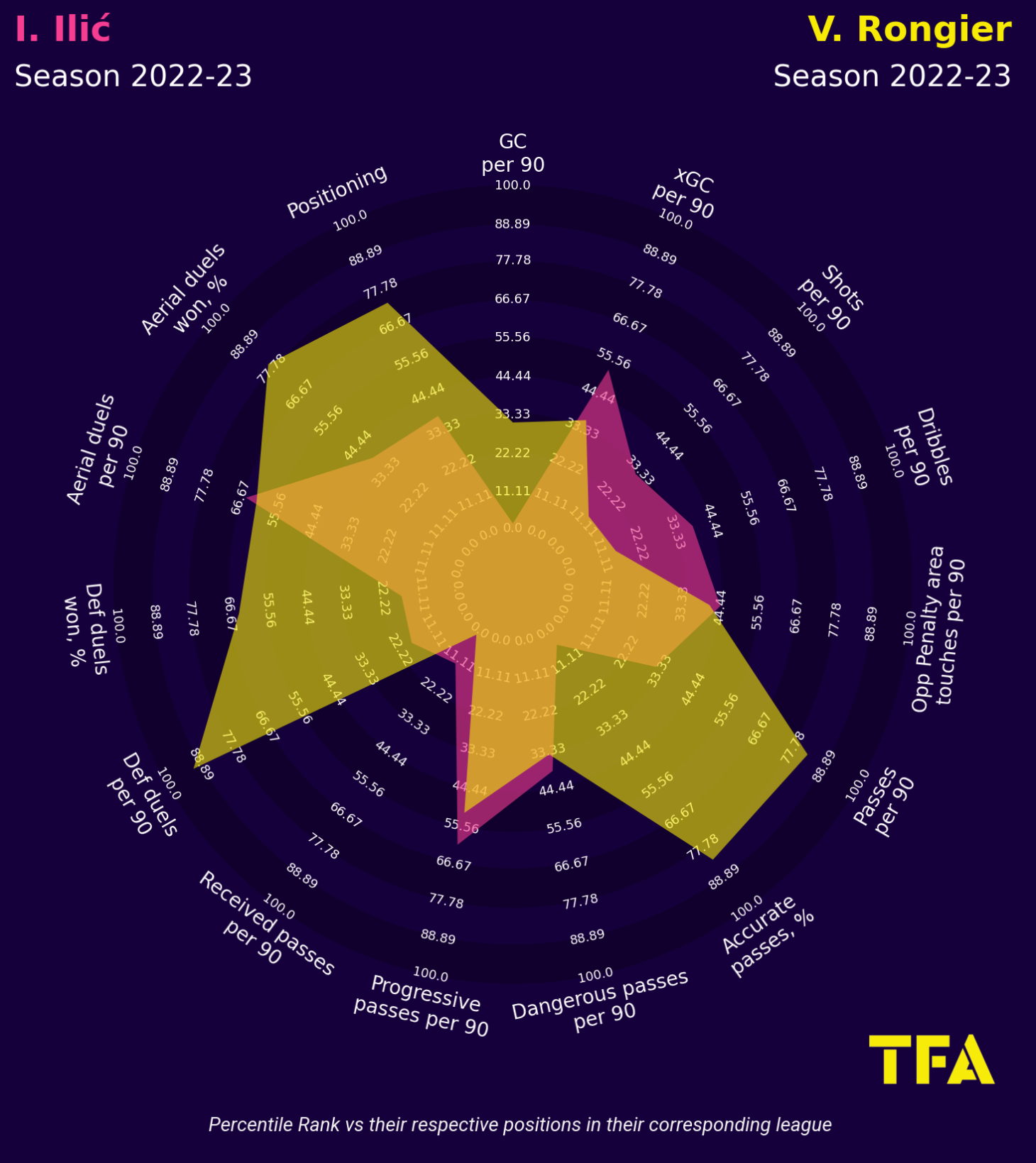 Ilic would most likely replace Valentin Rongier at Marseille. The above viz is a comparison between both players. It can be seen that Ilic is performing better in terms of defensive numbers. Valentin has the upper hand in defensive stats. Ilic is making more progressive passes per 90 as compared to Valentin. Overall, Ilic is much younger and provides extra intensity in the middle of the park.

Ivan Ilic has the maturity and a sense of efficiency uncommon among other midfielders of his age, and his ability to escape traps and even two-versus-one situations around the centre of the pitch is respectable. His strength in duels makes him a valuable asset in any defensive line or situation, and he is comfortable running the pitch forward to press or retreating to form a middle block. Ivan Ilic has a great set of skills and seems ready to offer his services in the Marseille midfield.