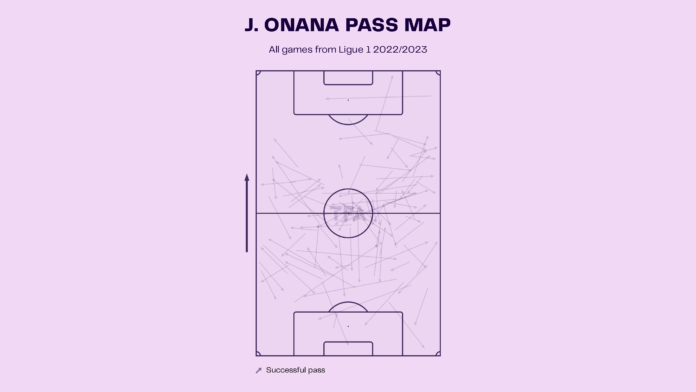 Jean Onana is a Cameroonian professional footballer who plays as a midfielder for Ligue 1 club Lens and the Cameroon national team. So far in his Ligue 1 career, he has played 33 matches in the competition, with three goals and two assists. Lens’ Jean Onana has played in a substantial number of the team’s Ligue 1 games in 2022/2023, making nine appearances overall. He has started three of these appearances across their 17 fixtures and has been mostly used off the bench on six occasions. He came off the bench against PSG and provided control and support to the Lens team at a time when PSG were at their most dangerous and trying desperately to get two goals back. Onana displayed maturity and understanding of the game beyond his years in the match against PSG. He will be a crucial part of the team going forward as well, and he will see much more game time in the remainder of the Ligue 1 season. Below are some of the stats for Jean Onana for his current season and most recent outing.

Onana for Lens so far this season 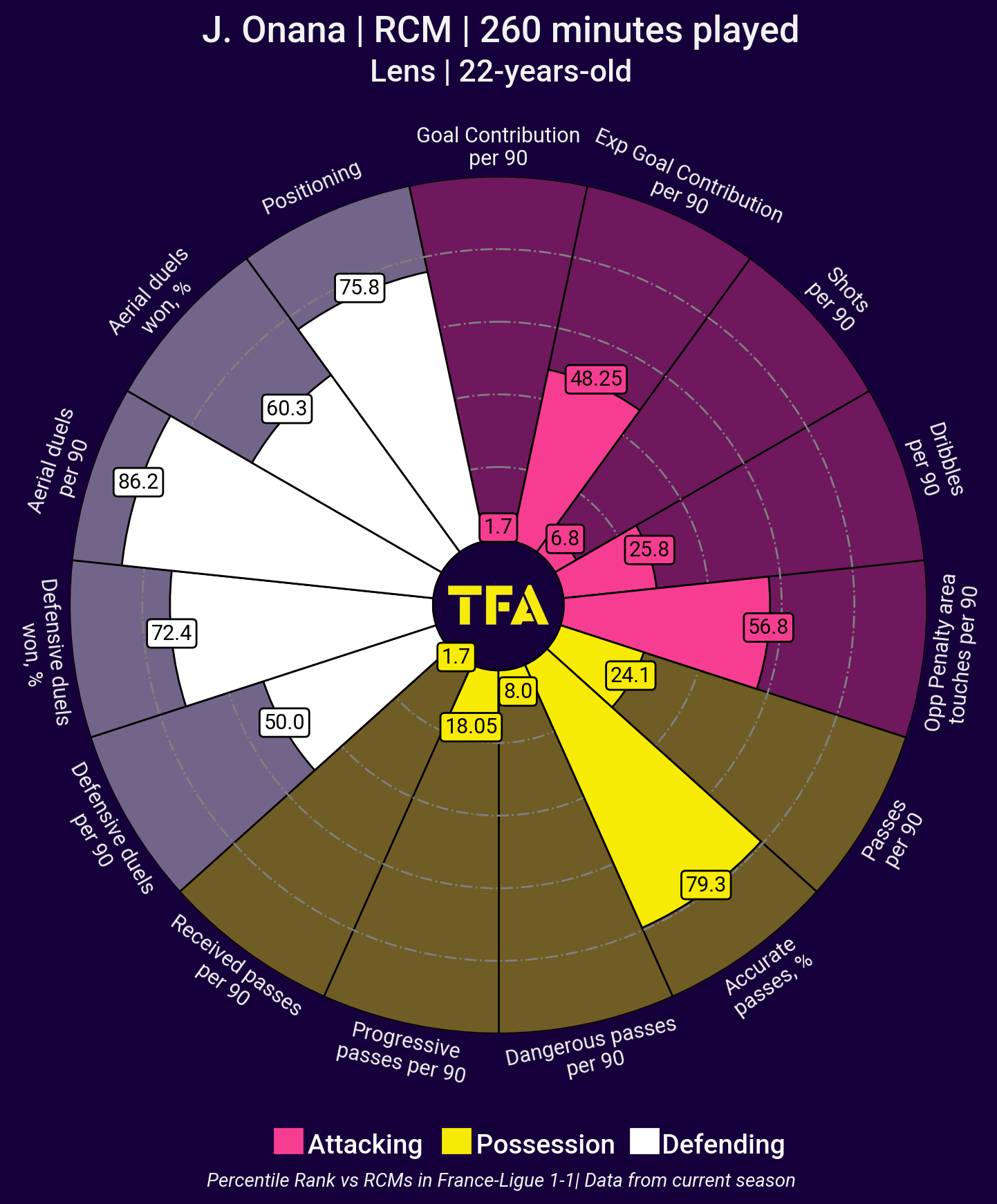 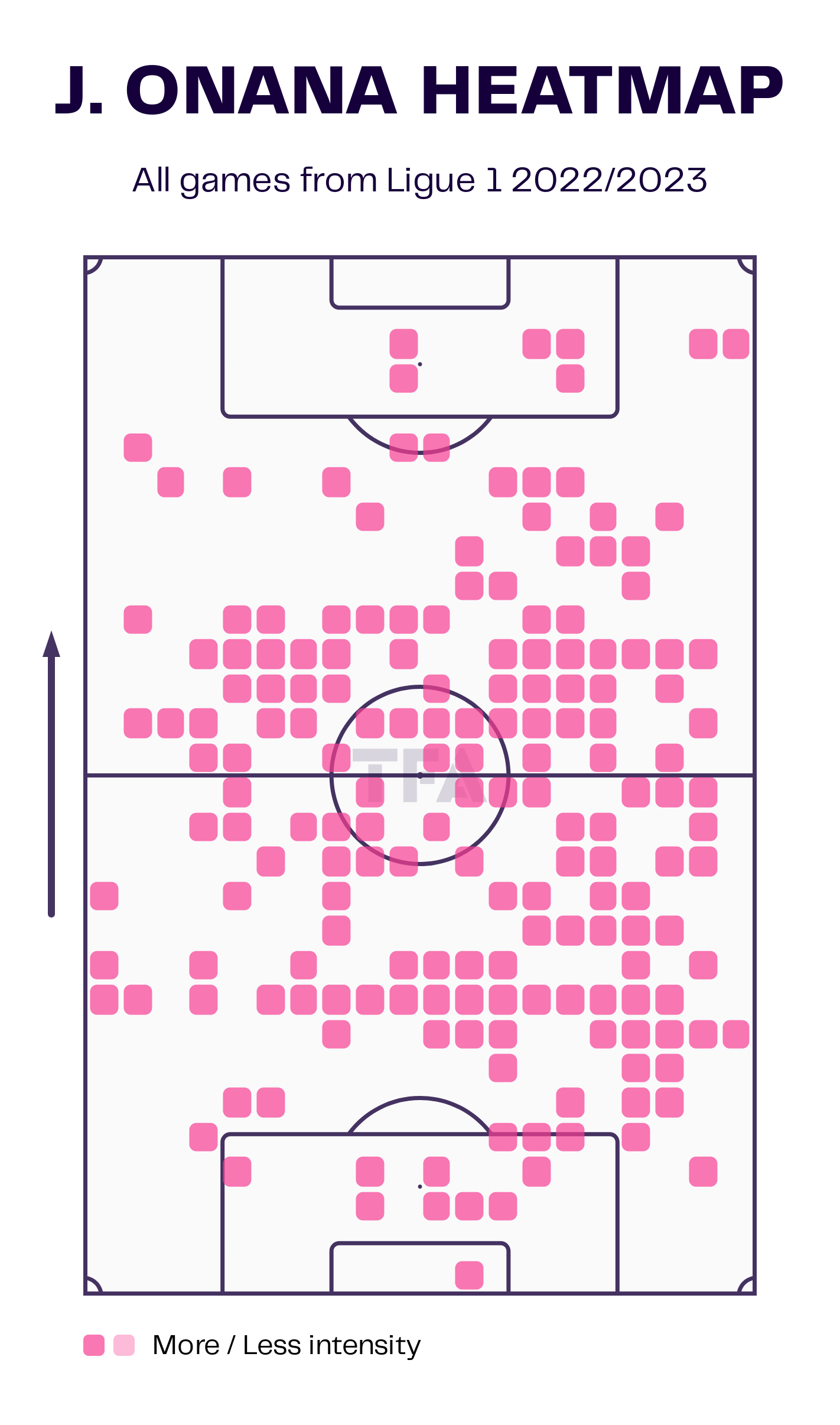 The above viz shows the percentile rank in comparison to the other right central midfielders in the league. He has appeared in nine games, mostly from the bench, and was used as a player to help the team regain control late in the game. He ranks highly for positioning, and his movement and positioning in the matches played have been exceptional for a player of his age. The player’s defensive stats are in a good range for a midfielder. He is ranked highly for accurate passes and has a pass accuracy of 91.6%. The player’s ability to defend has been extraordinary. He is ranked high for defensive and aerial duels won, and this has been a crucial advantage for the player and his team.

Onana performs offensive and defensive duties as a midfielder, and most of his intensity can be seen in the middle and final third of the pitch for Lens. He makes 1.04 dribbles and gets 1.04 touches in the opponent’s penalty area per 90 minutes. The player tends to position himself in the midfield, helping to bring the game under control and maintain possession. 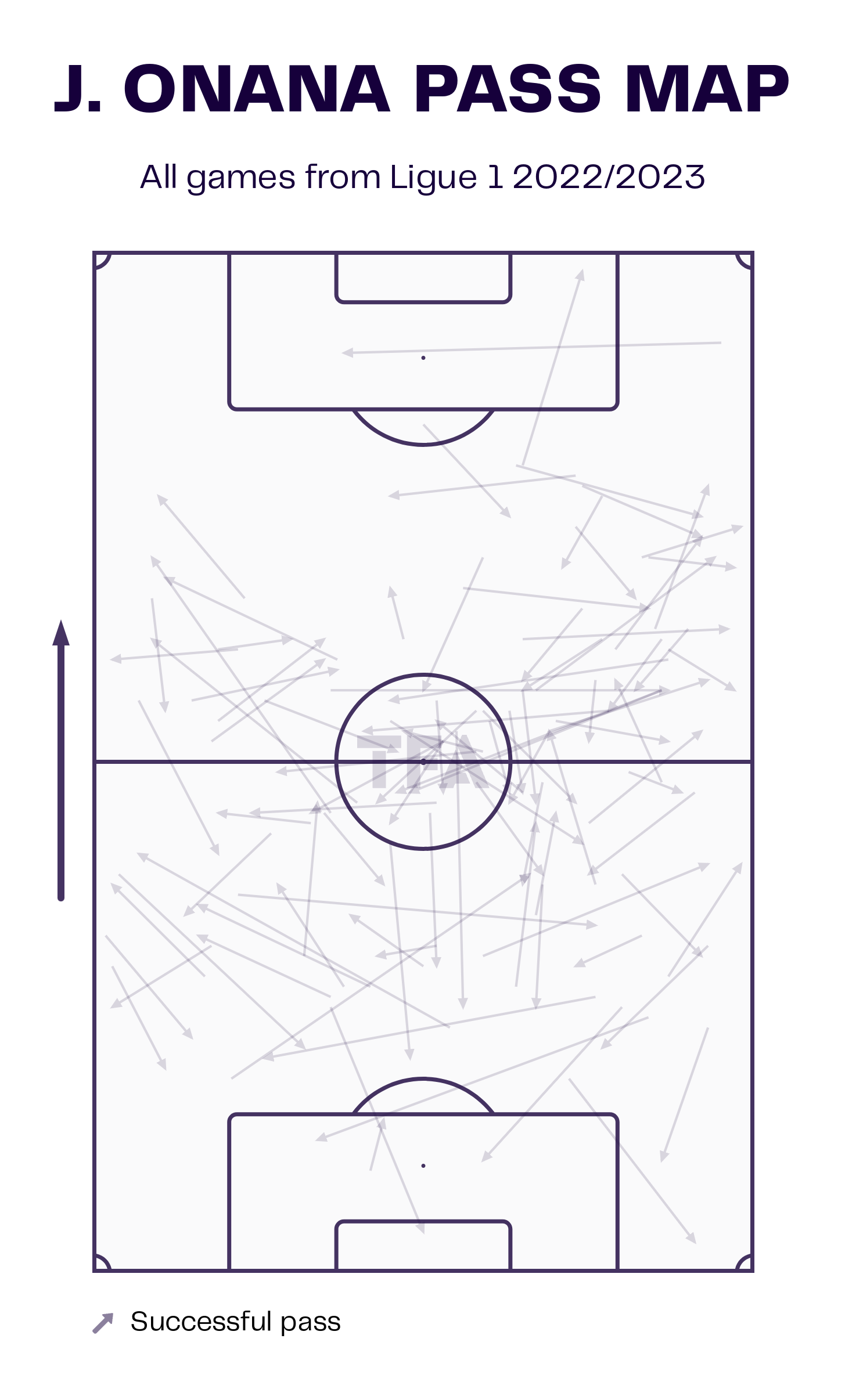 Jean Onana averages 37.04 accurate passes per 90 with a 91.6% accuracy. It can be seen that the player makes many passes back toward the backline or centre-backs, indicating his tendency to maintain possession for the team. He makes 3.46 passes to the final third per 90. Additionally, the player makes 6.92 forward passes and 10.38 backward passes on average. The trend suggests that his role is to provide support to the team by bringing control to the game since he makes more back passes per 90.

Controlling the game vs PSG 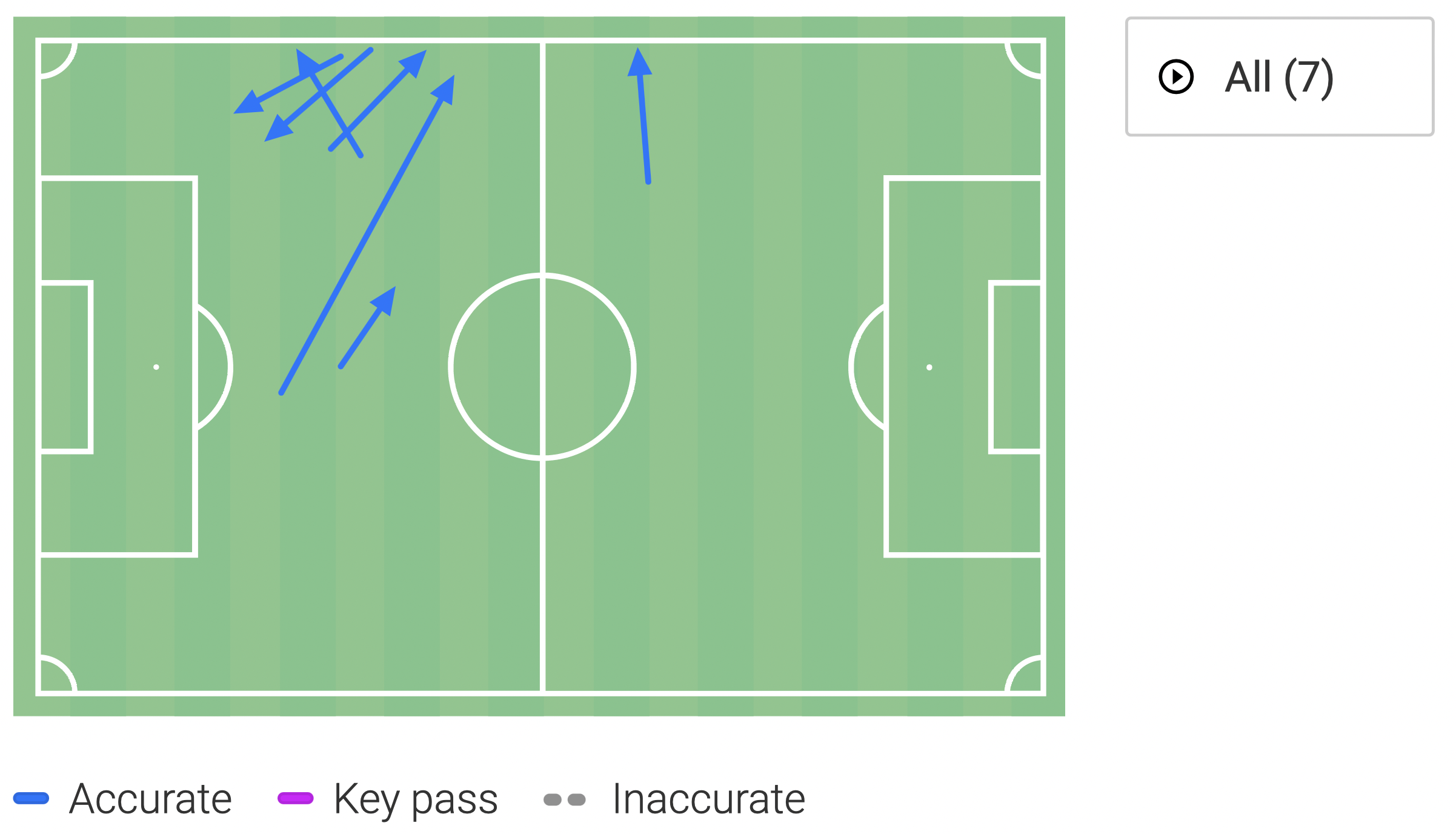 In his most recent match against PSG, Onana entered the match in the 73rd minute when Lens were leading three goals to one. It was the period of the game where PSG were putting maximum pressure on Lens in order to retrieve the ball and create positional attacks. In the above map, it can be seen that Onana had 100% success for passes attempted and completed seven out of seven passes. He played one long pass, two forward passes, and four back passes. His presence on the pitch was crucial in the late stages of the match since he contributed by positioning and also defending important runs from the opposition.

Crucial actions against the leaders 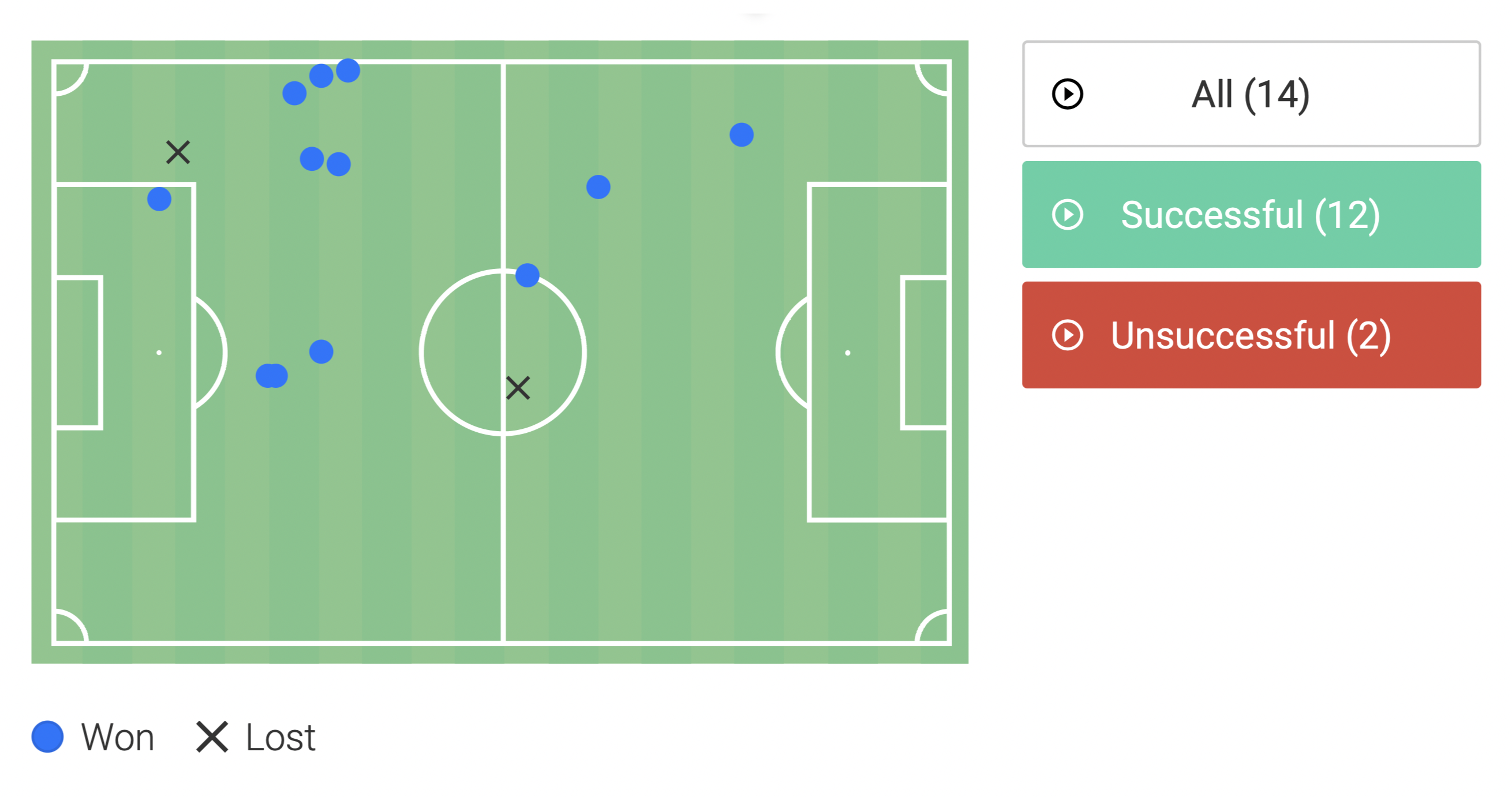 Onana won 12 out of 14 defensive duels in the match and was important in stopping dangerous attacks from PSG during the final quarter of the match. His presence on the right flank meant that he stopped PSG from attacking from their left and using Kylian Mbappe as often as possible. This again highlights his positioning awareness and ability to contribute defensively to the team and bring composure to the match. 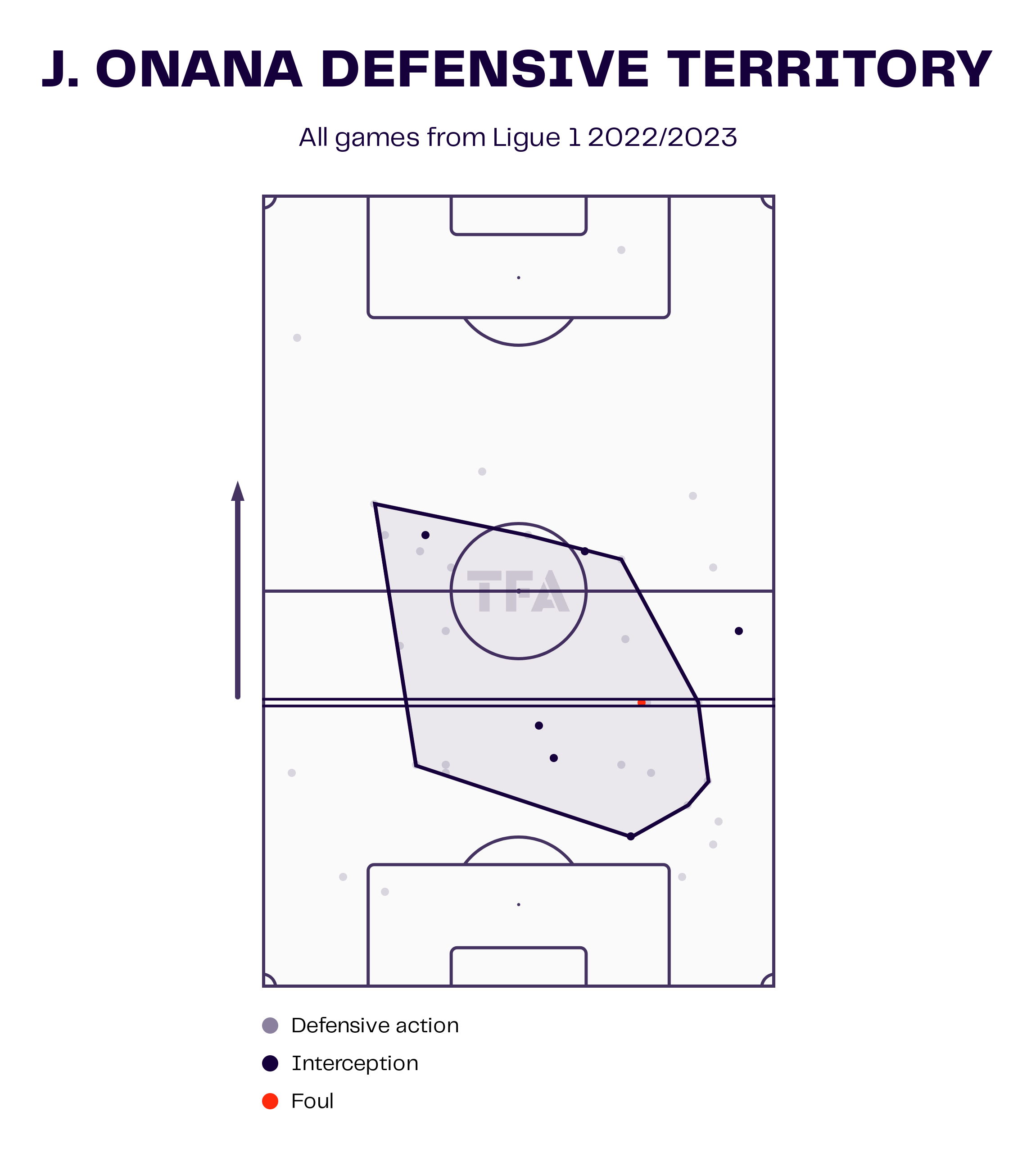 Lens plays with a high backline; they tend to put pressure close to the middle and final third. The above viz shows the defensive territory of the player. It indicates that Onana is involved in a lot of defensive actions throughout his own half and makes interceptions all around the defensive and middle third. It can be observed that the player has not given up many fouls and has averaged only 0.35 fouls in the current season. Overall, he has an average of 7.96 defensive duels per 90, with 62.3% success. Onana averages 3.46 interceptions per 90 minutes. In terms of aerial duels, he averages a win rate of 55.6% out of 3.12 contested on average. Additionally, the player makes 5.88 recoveries in the opponent’s half per 90 minutes in the current season.

Overall, Jean Onana has been a stronghold for Lens, especially off the bench. He has been used as a player to bring precision to the game, which is much needed in the dying minutes of the match. He has been performing his duties in the middle of the park and is a diligent player who likes to act as a calming presence in the midfield. He is a player with extremely high quality and precision and is a crucial part of the current Lens team. He is a midfield prodigy in the making and given that Lens are performing well this season, the world will soon see this talent shine more often in Ligue 1.

Under the microscope: How Lorient are in the battle for a...