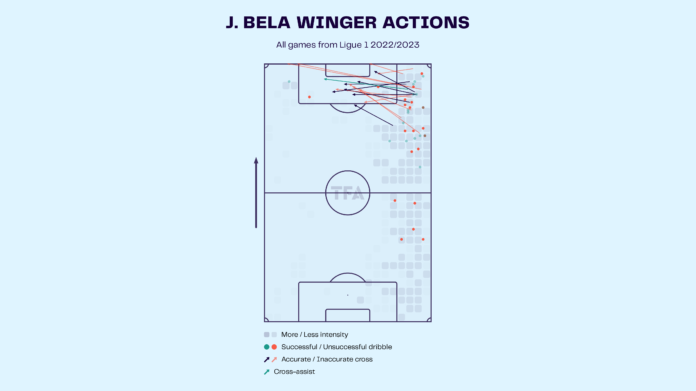 Jeremie Bela is a professional footballer who plays as a winger or forward for Ligue 1 club Clermont and the Angola national team. He has played for Lens, Dijon, Albacete, and Birmingham City. He usually plays on the right wing and sometimes switches flanks with players on the left flank. He has appeared in 13 matches for Clermont this season and provided one goal and one assist. His performance has been decent for the team, and he has been a good pillar of support in attacking from the right flank. Clermont are currently in 8th place in Ligue 1 and can qualify for Europe if they find success in the remainder of the season. Bela will be keen on helping his side push forward. Below are some stats of the player for the current season playing for Clermont.

Bela in front of the goal 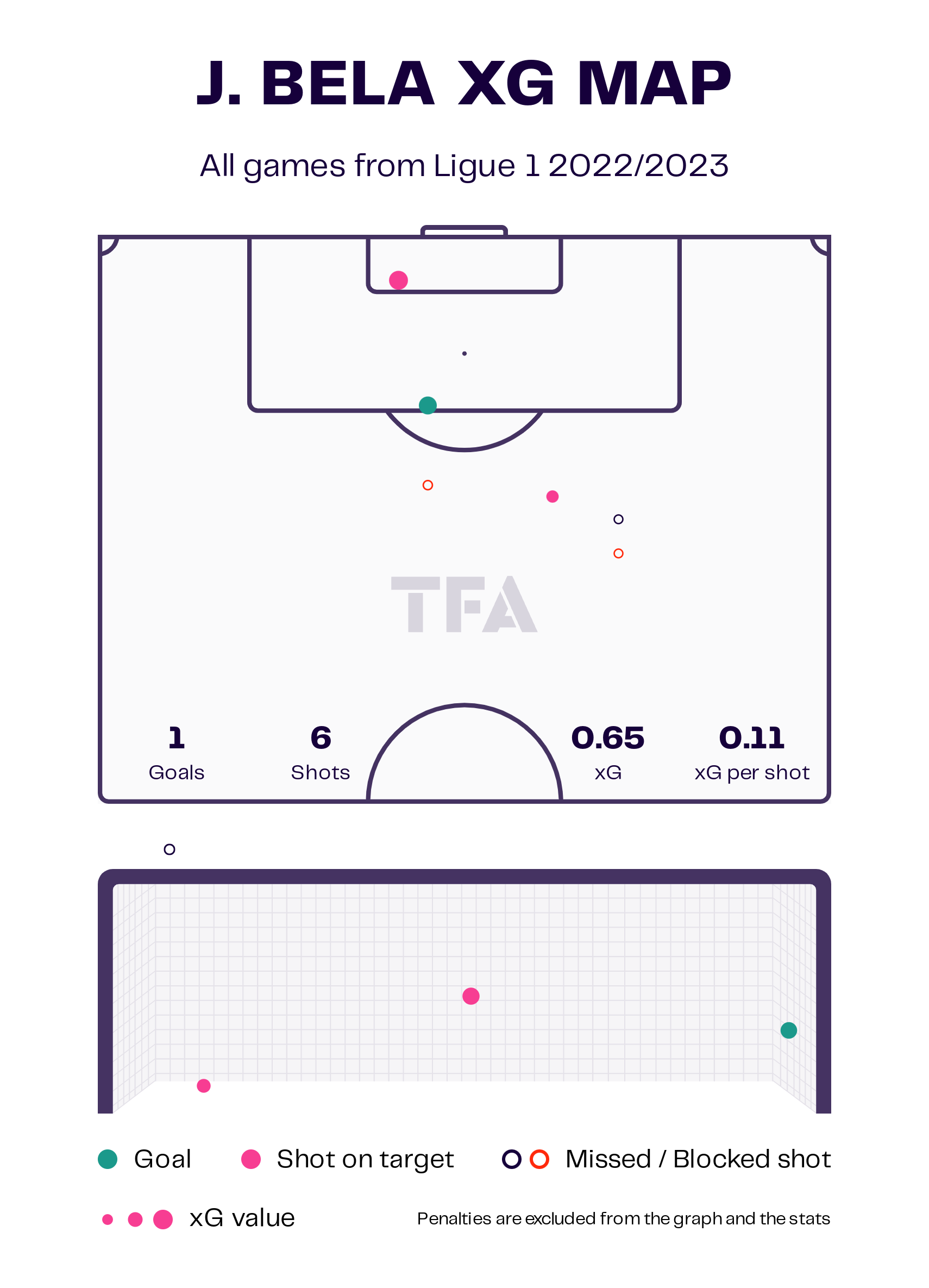 In the 2022–23 French Ligue 1 season, Jeremie Bela has played seven matches (plus five as a sub). He has three shots on target from a total of six and has scored one goal (0.65 xG). Jeremie Bela averages 13 passes per match with a pass completion rate of 74% and has one assist for Clermont this season. He likes to take shots from long range and has scored his goal from just on the edge of the box. Overall, he has made four long-range efforts. He takes 0.85 shots per 90 minutes, with 50% shot accuracy. 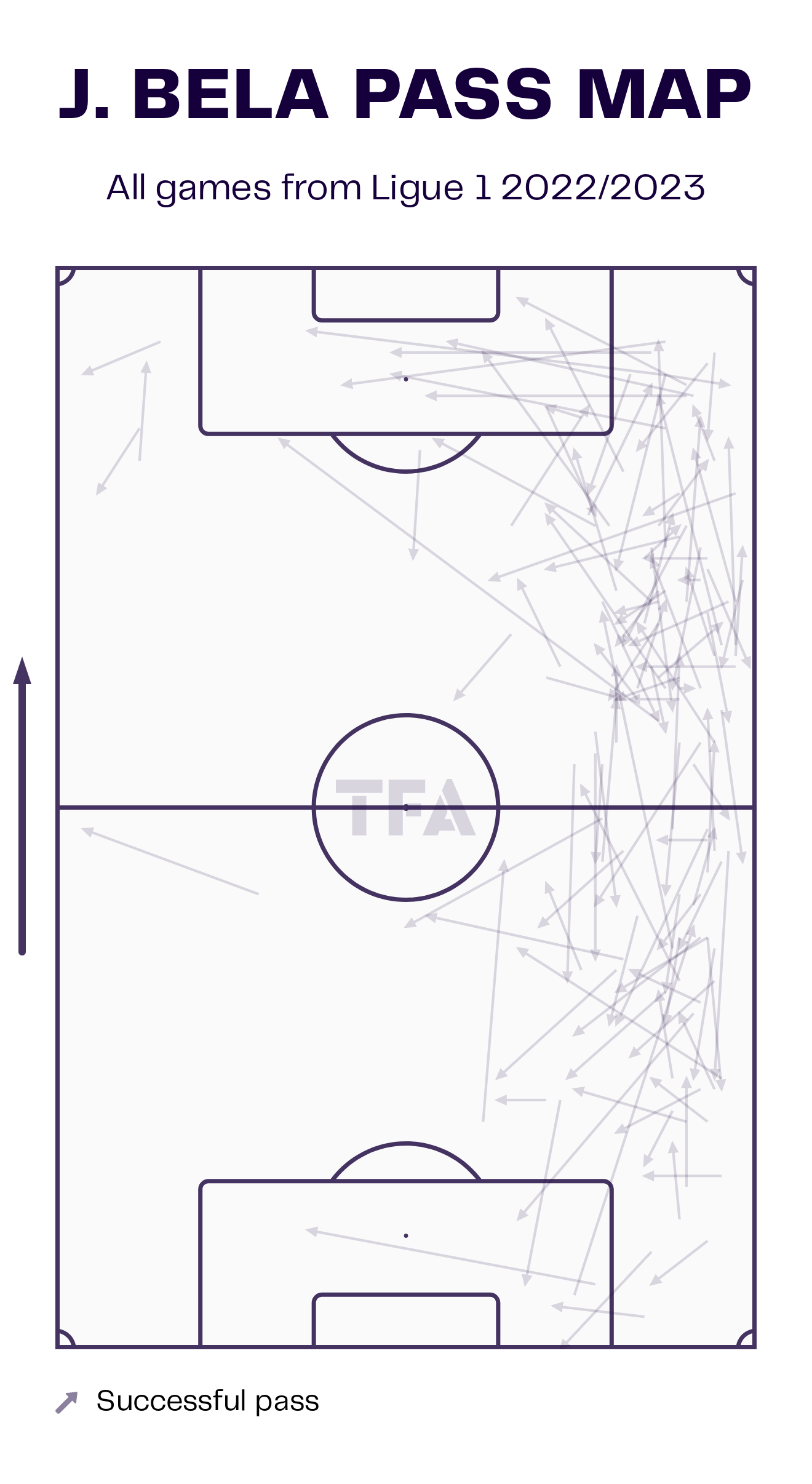 Bela makes most of his movement on the right flank. He is a constant attacking threat on the right wing and constantly positions himself in dangerous positions. The above viz is a representation of the passes made by the player in the current Ligue 1 season. It can be observed that there are many successful passes into the box as well as cutbacks from wider areas. Jeremie Bela averages 24 passes per match with a pass completion rate of 72%. Additionally, he makes 2.6 passes to the penalty area per 90 minutes played.

Bela from the wings 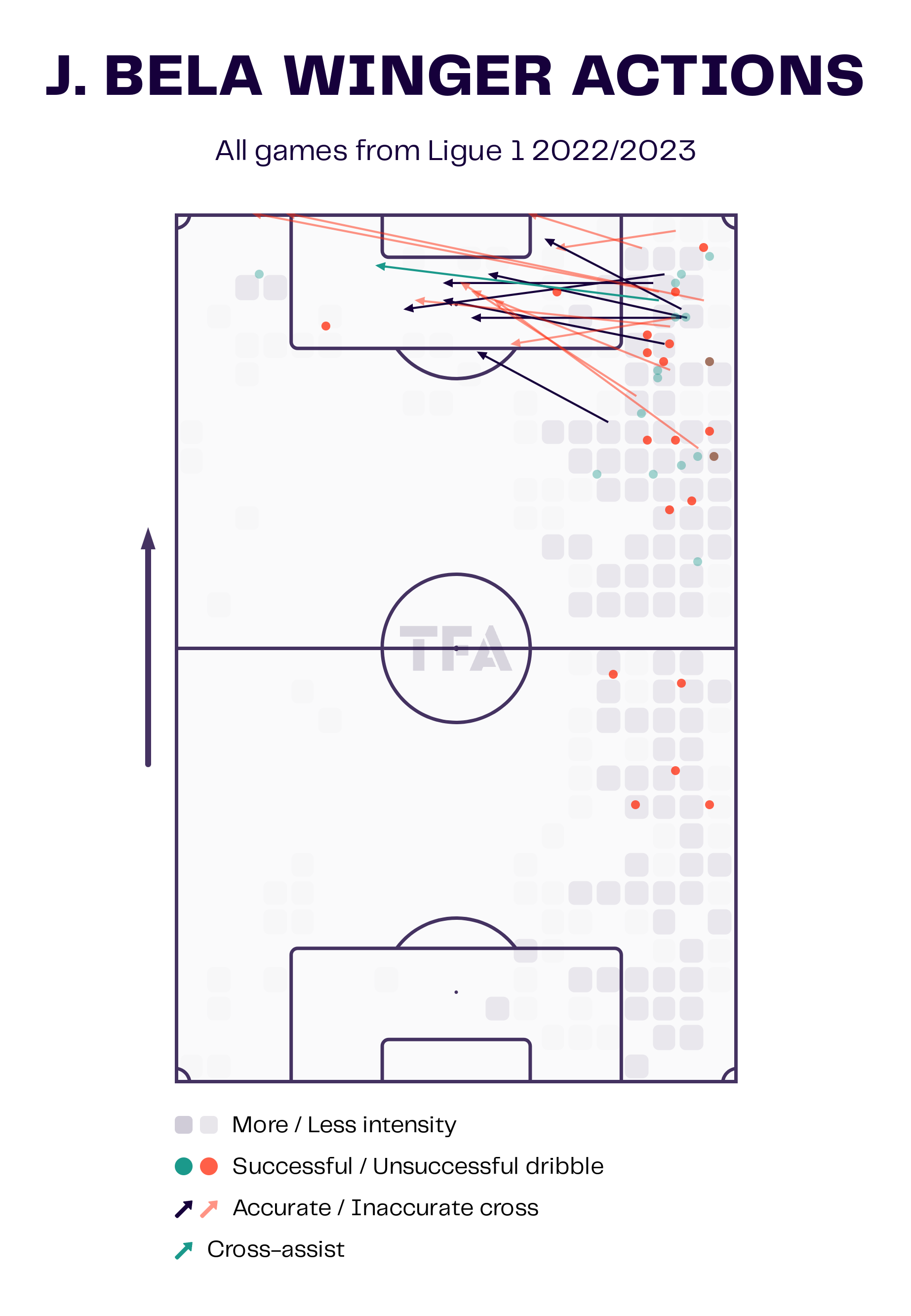 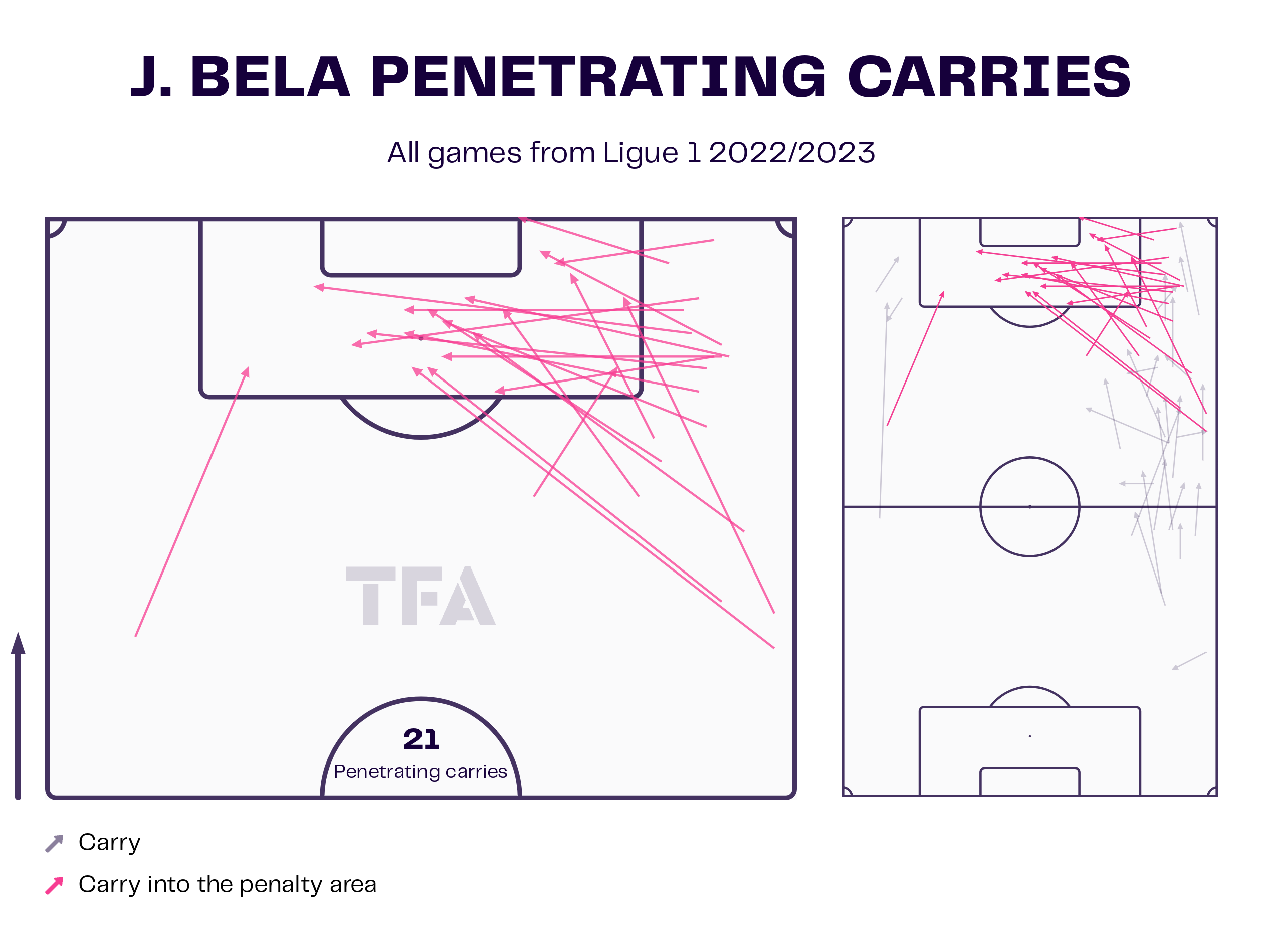 The above viz depicts Bela’s winger actions during the 2022/23 Ligue 1 season. Bela attempts to dribble in the middle as well as in the final third. The number of successful dribbles is poor in his own half and goes on to increase in the final third. There are many attempts to cut inside from the flanks on the right wing. Additionally, he makes 3.52 crosses on average per 90 with a 37% success rate. In terms of dribbles, Bela completes 5.07 dribbles per 90 with a success rate of 44.4%. He has made a total of 21 penetrating carries into the penalty box. The player has an average of 1.13 touches in the penalty area per 90. 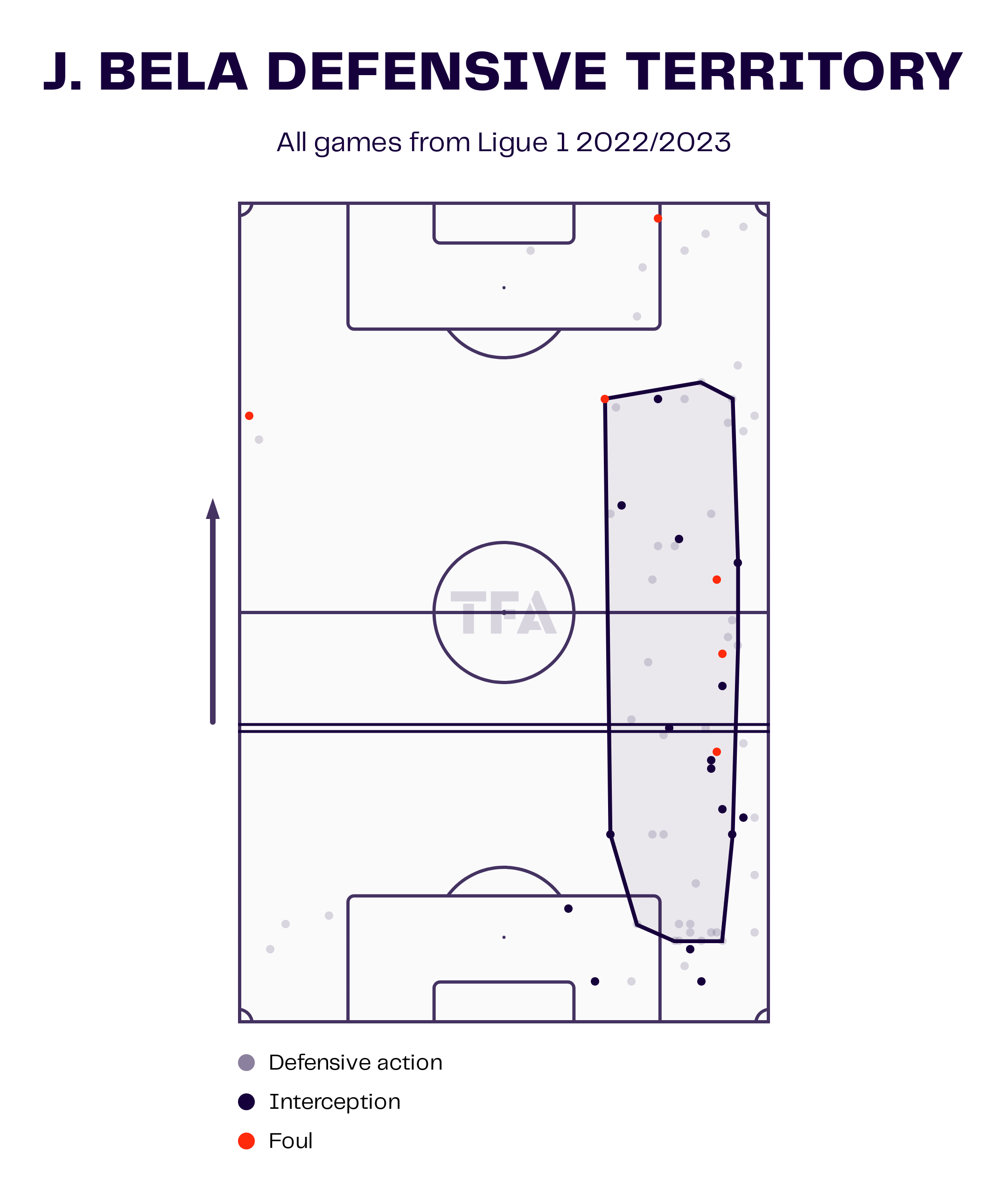 The above viz represents the defensive action made by Bela in the current season. He moves up and down the flank and has a good work rate. He has made interceptions in his own half as well as near the final third. He has 17.89 duels per 90 with a success rate of 51.2%. He has also given away a few fouls, averaging 0.85 fouls per match in Ligue 1 in 2022/23. He makes 4.93 interceptions per 90 minutes, compared to 4.08 recoveries in the opposition half. 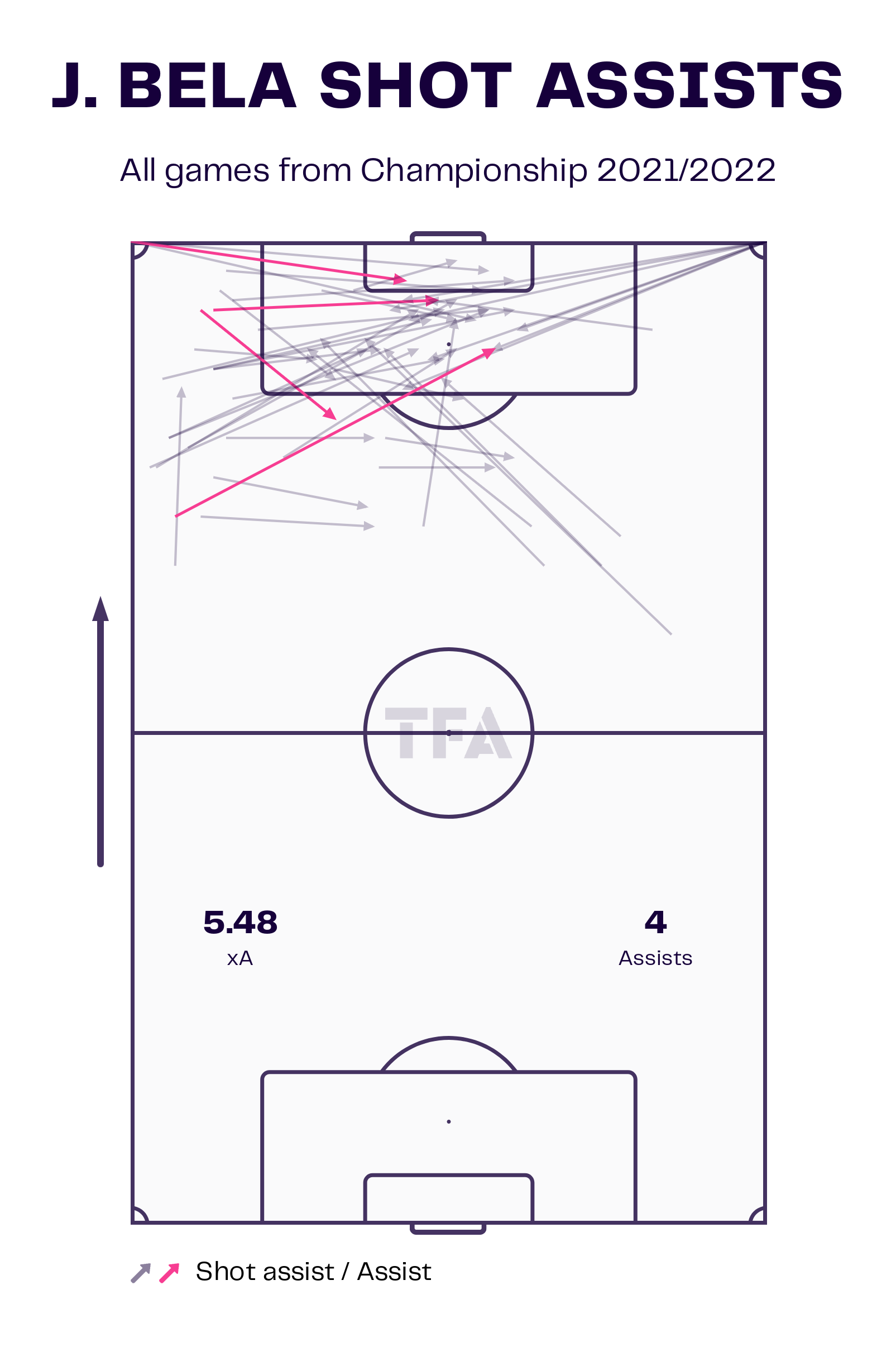 Jeremie Bela played for Birmingham City in the EFL Championship during the 2021/22 season. He appeared in a total of 31 matches for the side and managed to score two goals and provide four assists over all the matches played. The above viz shows his assist map for last season. He finished the season with an xA of 5.48 and provided four assists. Most of his action came from the left flank on the pitch, and he was also active in corner duty.

Overall, Bela has had a decent season for Clermont so far. He has the ability to generate an attacking threat from the wings and perform offensive and defensive duties from the flanks. He is not the best in front of goal but performs well in terms of creating an attacking threat on the pitch. He will look to push further this season and help his side move up the ranks.