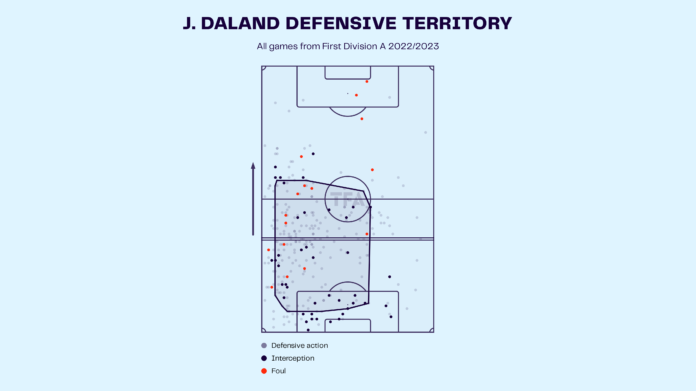 This season in Ligue 1, Monaco’s form is gaining some attention. AS Monaco are overall with eight wins, three draws, and four losses. This performance currently places Monaco at sixth out of 20 teams in the Ligue 1 Table. Monaco has scored a total of 29 goals this in the 2022/23 Ligue 1 season. AS Monaco is keeping tabs on Cercle Brugges’ centre-back Jesper Daland who is a Norwegian professional footballer playing as a defender for Belgian First Division A club, Cercle Brugge. It will be interesting to see how AS Monaco can utilize the services of Jesper Daland to improve their long-term Ligue 1 standings. Let us now look at some of the stats displayed by Jesper Daland at Cercle Brugges and how he can hopefully benefit Monaco by joining hands under coach Phillipe Clement. 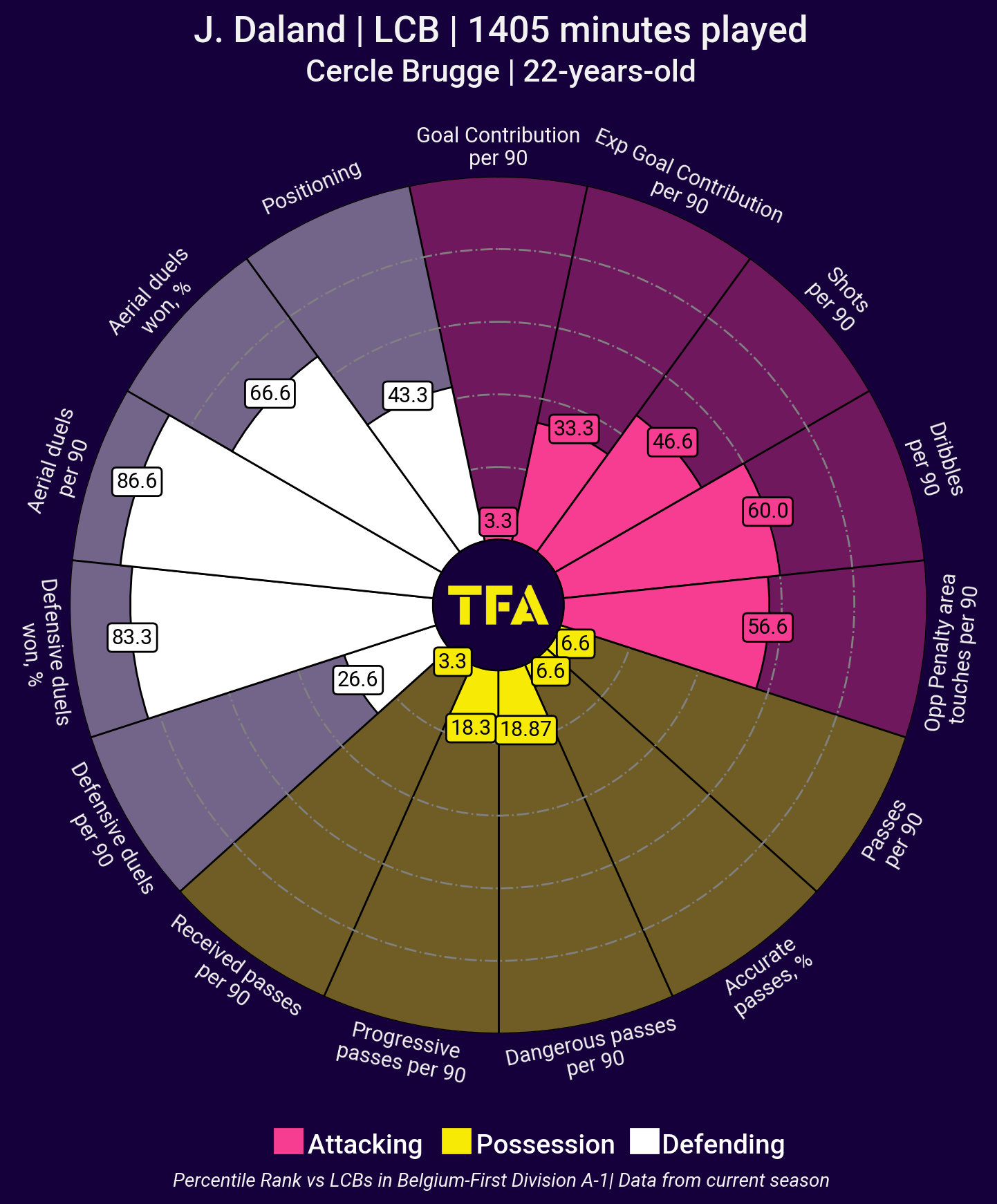 Jesper Daland has been a regular part of the Belgian First Division side, Cercle Brugge. Jesper plays as a left centre-back for Cercle Brugge. He has played in the vast majority of the club’s First Division A matches in 2022–2023, making 16 appearances overall and accumulating 1,294 minutes of playing time. He has been selected in the starting lineup in 14 of these appearances across their 17 fixtures and has entered as a substitute on two occasions. The above viz shows the stats of the player in comparison to the other players featured as left-centre backs. Defensively, Jesper Daland has displayed good numbers in terms of the percentage of defensive duels won and ariel duels per 90. As a centre-back, he also possesses surprisingly good ability with the ball. He has attempted frequent dribbles per 90 as well. 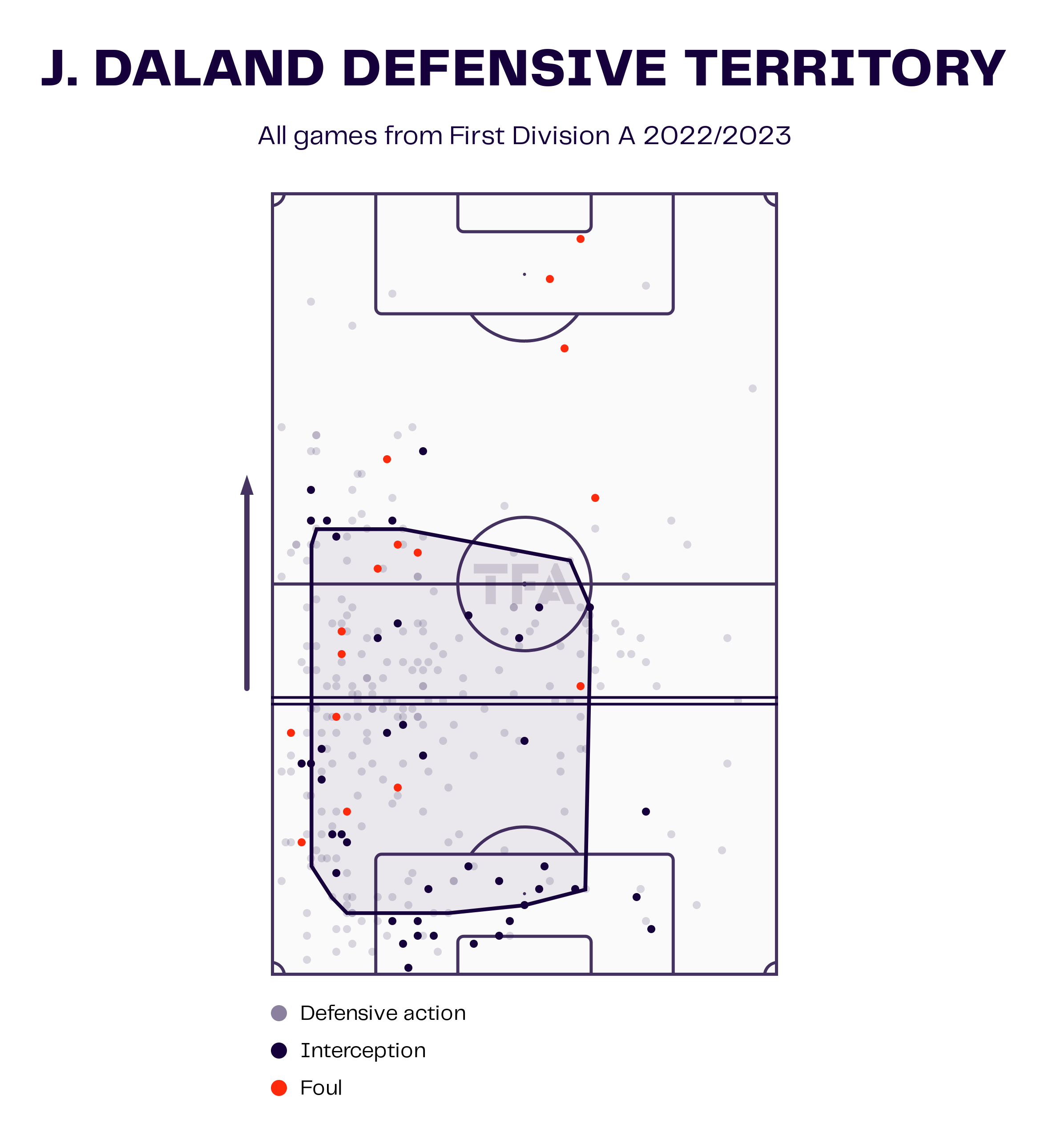 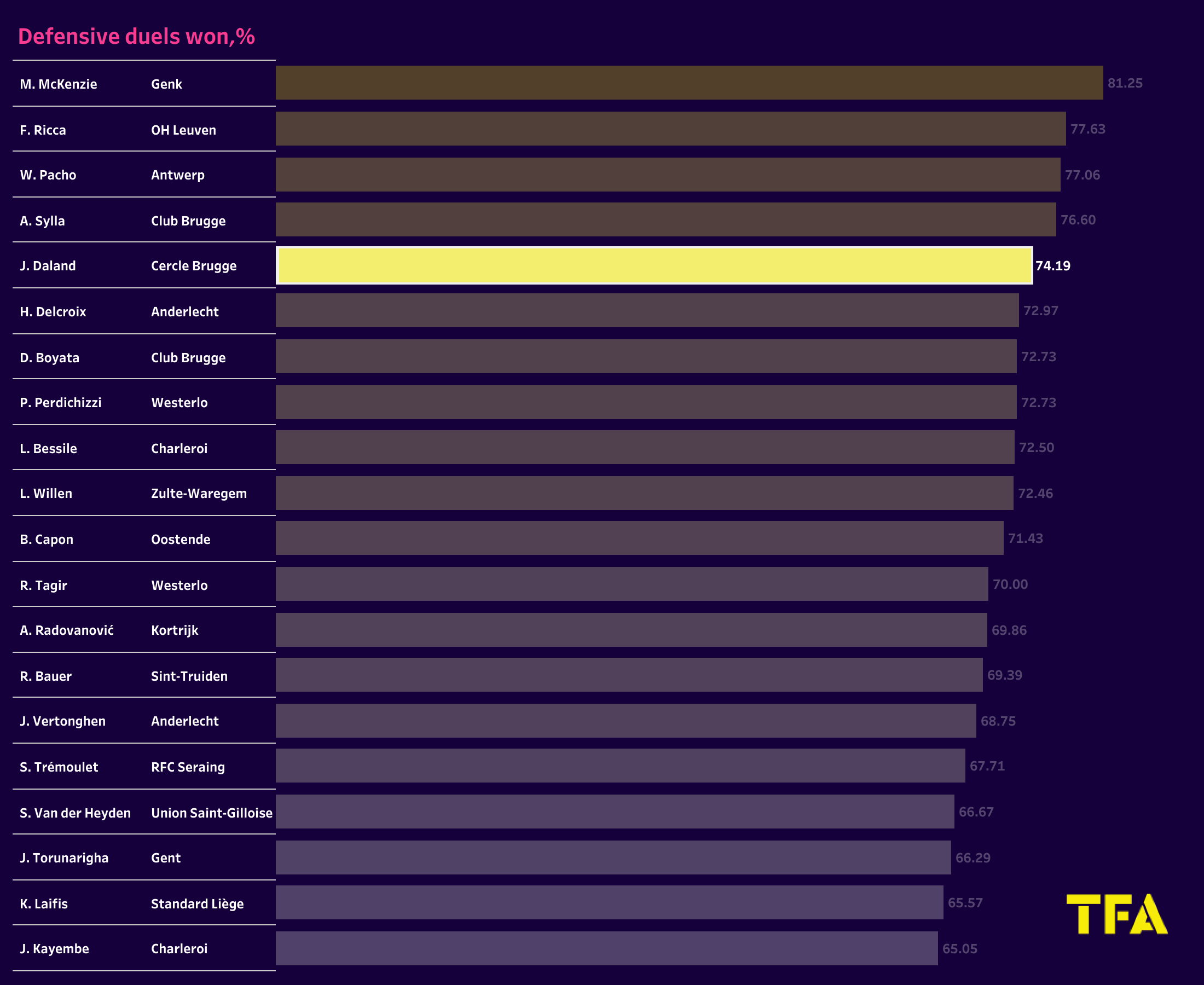 The above table is for all the left centre-backs playing in the Belgian First Division. Jesper Daland is performing decently overall and has won 74.19 percent of the defensive duels he has taken on. Additionally, his performance in the air has been only somewhat impressive. He has won only 69 per cent of all the ariel duels he has contested. 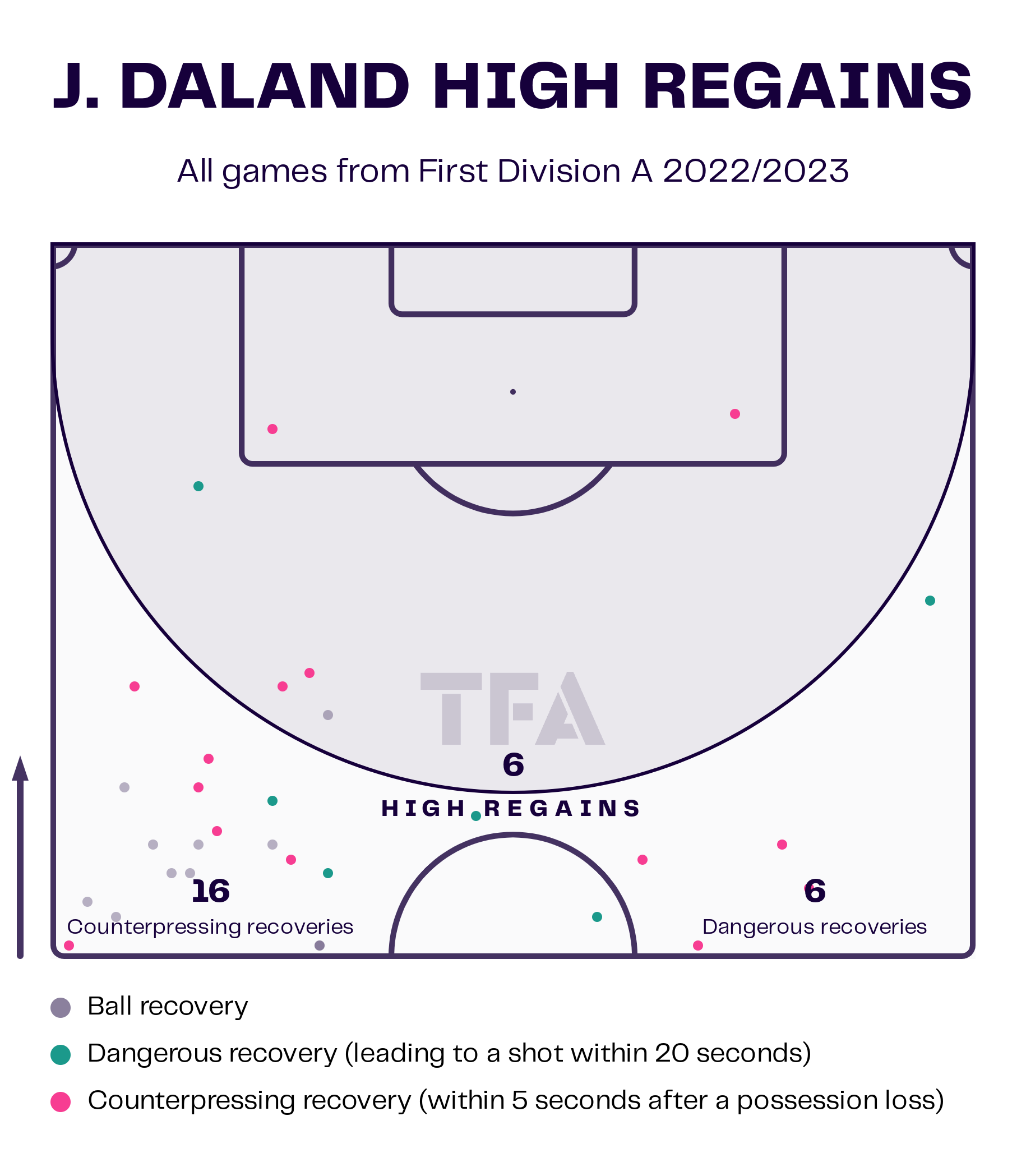 Jesper Daland has a total of 16 counter-pressing recoveries made within five seconds of losing the ball. This is a good sign for the likes of Monaco, who like to apply pressure on the opponent with lots of intensity. He has also made a total of six high regains and six dangerous recoveries each. The highlight with respect to his left-sided positioning on the pitch is also visible. Most of the defensive action takes place in that area of the pitch.

Who can Daland replace at Monaco? 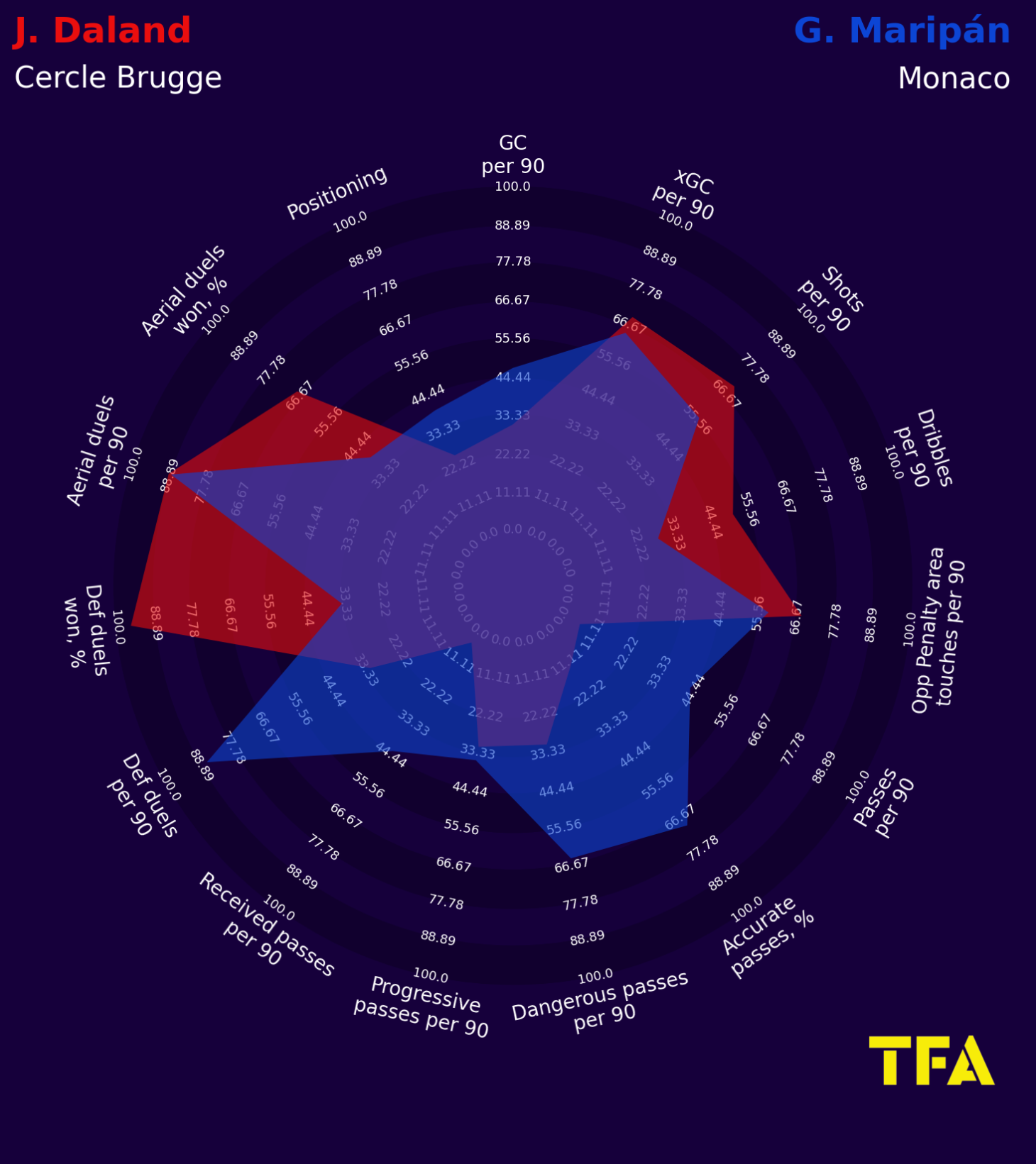 As a defender, Guillermo Maripan has conceded eight goals and kept two clean sheets in ten matches in the Ligue 1 2022–2023 season. The above viz is a comparison between Maripan and Daland for the matches played for their teams, Monaco and Cercle, respectively. Daland has done well in defence, and he has won the aerial duel. Maripan, on the other hand, has fared far better in terms of accurate passes and overall passing stats. There is room for improvement in Dalands’ passing attributes, and being just 22 years old, there is an improvement to come.

AS Monaco are currently sixth on the table and in the race to climb up the table. Monaco are hungry and wants to pick the spot that gives them a ticket to European competition. They will be interested in gaining the services of 22-year-old Jasper Daland and monitoring the situation closely.

Transfer Analysis: What Ruslan Malinovskyi could bring to Marseille’s midfield