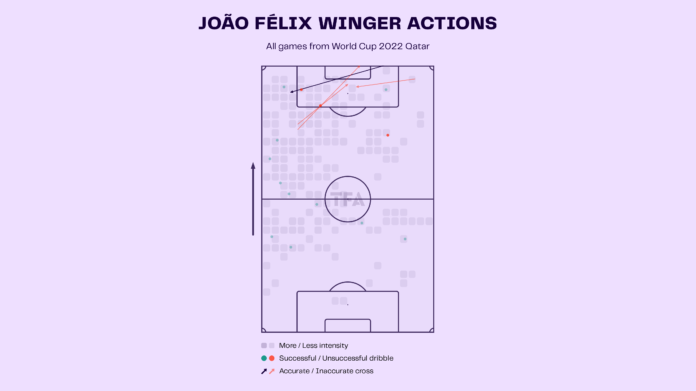 Joao Felix, a forward for Atletico Madrid, desires to play for Paris Saint-Germain. A transfer to the Ligue 1 team is heavily rumoured for the Portuguese forward. He is reportedly interested in clubs such as Arsenal, Manchester United, and Aston Villa. PSG are also interested in the forward, with the reigning Ligue 1 champions looking to add another forward to their arsenal. Atletico Madrid wants a huge fee and the player apparently wants to go to PSG. Given that Felix is still just 23 years old, Atletico could justifiably argue that his best years are ahead of him. Additionally, Felix didn’t do potential buyers any favours with his strong form at the World Cup. The Portugal international grabbed a goal and two assists in four games at the tournament. He looked particularly good in their win over Switzerland. Let us now look at the stats and performances of Joao Felix for club and country this season. 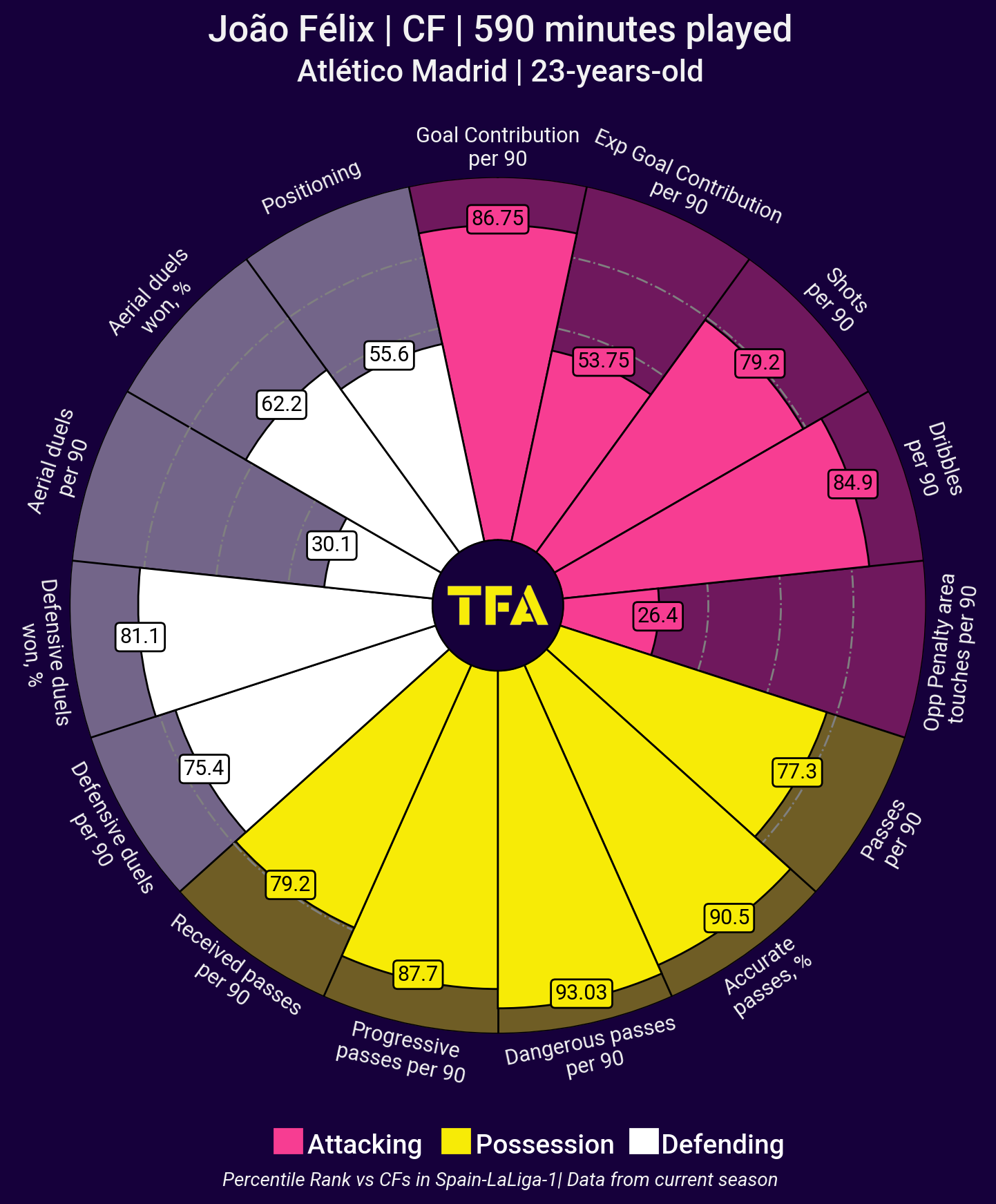 Joao Felix has fallen down the pecking order in Diego Simeone’s squad selection for Atletico Madrid this season. Felix has struggled to impress his manager this season, resulting in limited playing time for his club. In La Liga 2022/23, Joao Felix has played five matches (plus seven as a sub). The above viz shows the stats of Joao Felix in comparison to the other players featured as centre forwards in La Liga. It can be observed that Felix has excellent attacking as well as possession stats. Joao Felix possesses eye-catching stats for a player who has played very little this season. His goal contribution per 90 minutes demonstrates his importance to the club’s goal-scoring. Felix also boasts a high number of dribbles per 90. Additionally, being trained under Simeone has built his defensive abilities. Felix has a good percentage of defensive and aerial duels won per 90 minutes.

Felix in attack for Atletico Madrid 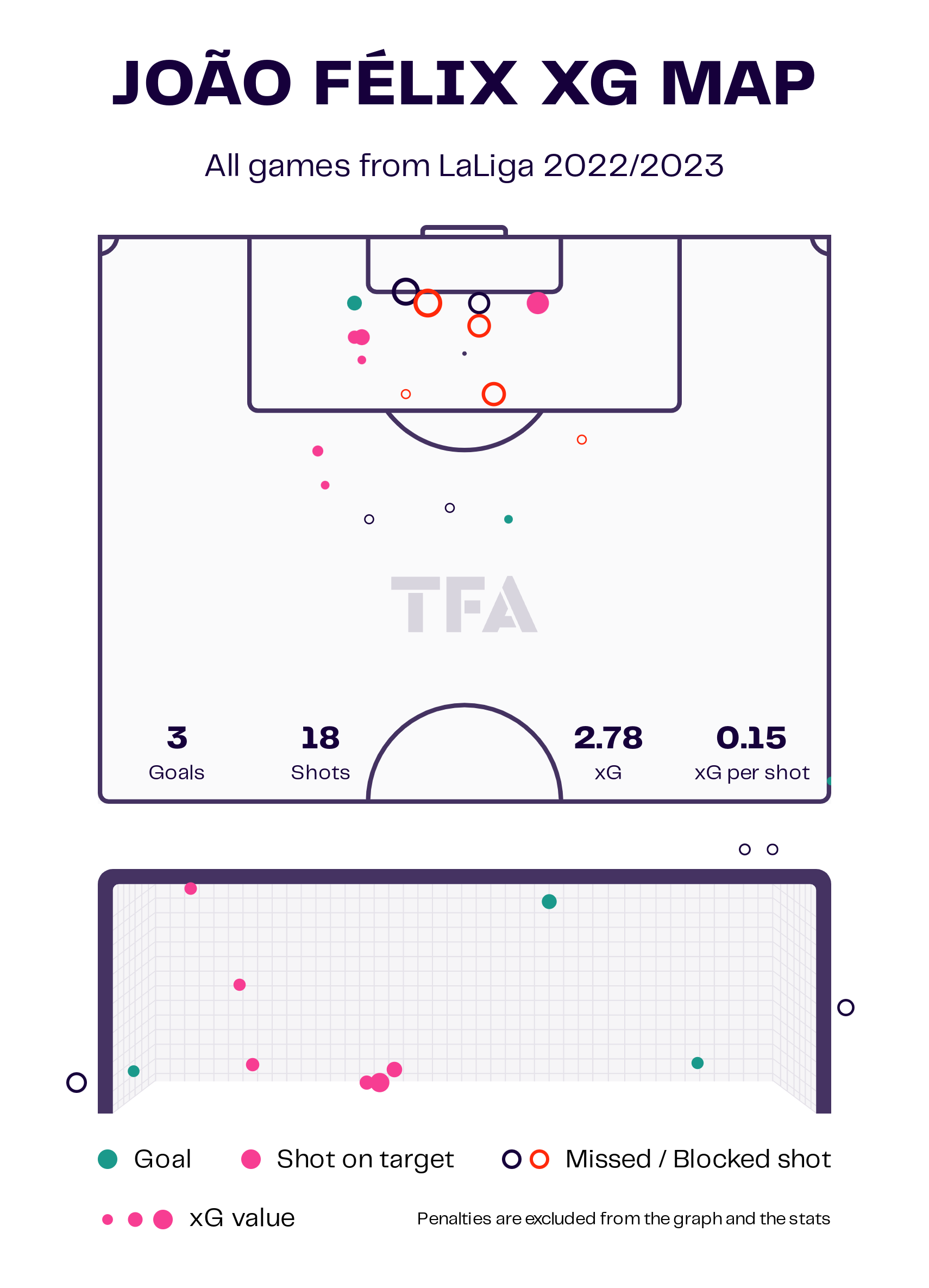 Joao Felix has scored three goals in 18 shots so far in the La Liga 2022-2023 season. One of the three goals was scored at home, while the other two were scored on the road. Overall, Joao Felix’s goals scored per 90 minutes are 0.46. Moreover, Joao’s total goal contribution (goals plus assists) is six. His xG equates to 0.42 per 90 minutes and has an overall xG of 2.78. It is seen that Joao takes shots from inside and outside the box and successfully scores on both occasions. 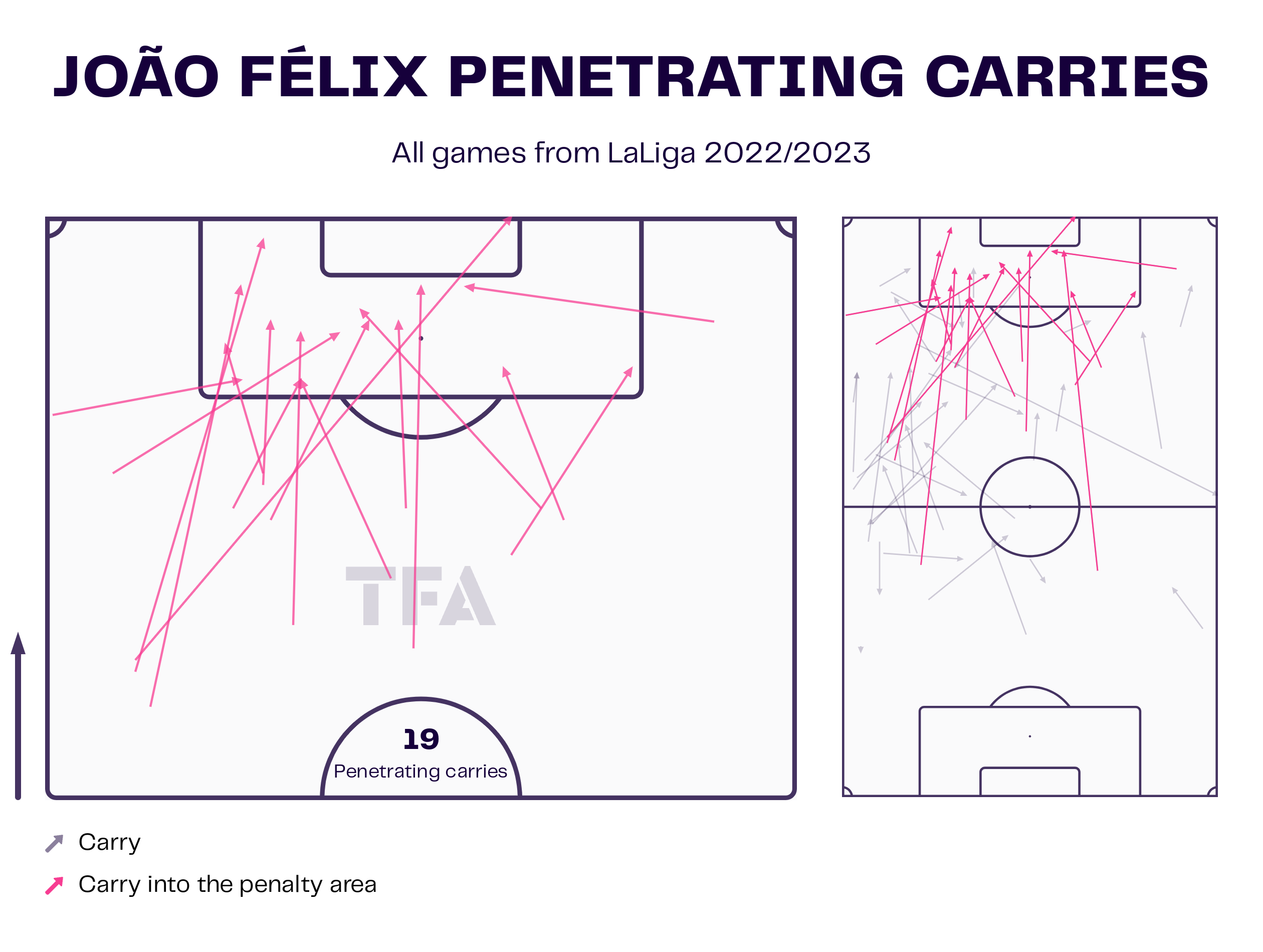 Joao Felix plays with tenacity for Atletico and has an excellent ability with the ball. Overall, Felix ranks among the top percentile for dribbles per 90 in La Liga. He makes 4.2 dribbles per 90, which is the eighth most for centre-forwards in La Liga in 2022/23. The above viz depicts Felix’s penetrating carries in all La Liga 2022/23 games. Felix has made 19 penetrating carries into the penalty area. 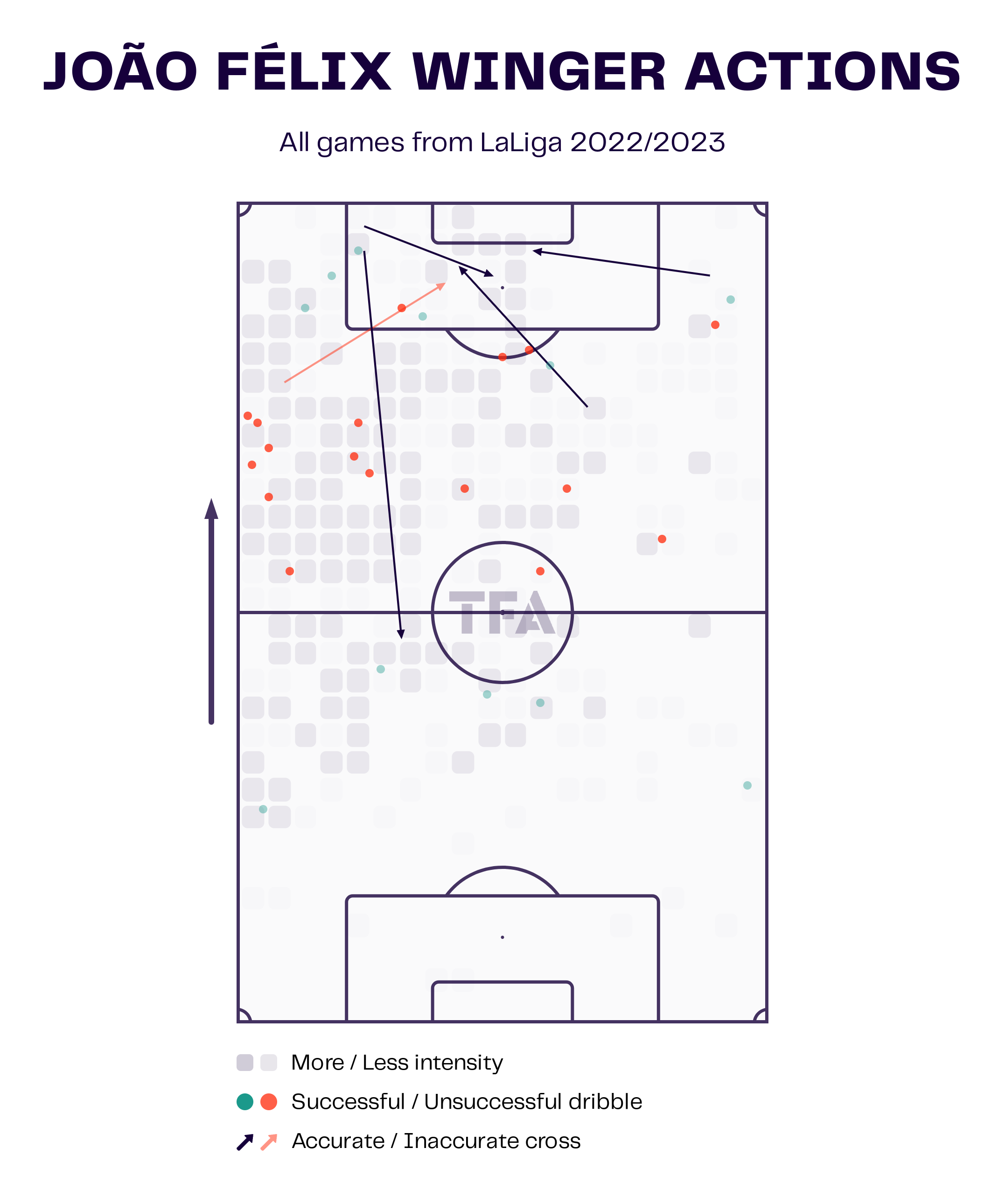 Joao Felix makes 4.2 dribbles per 90 and has a success rate of 77% for dribbling. Most of his intense actions take place in the left half of the field. He also attempts to carry the ball forward from his own half on many occasions. His attempts at dribbling are more in the middle third of the pitch. Felix has also attempted to carry the ball into the box in the final third on a few occasions. 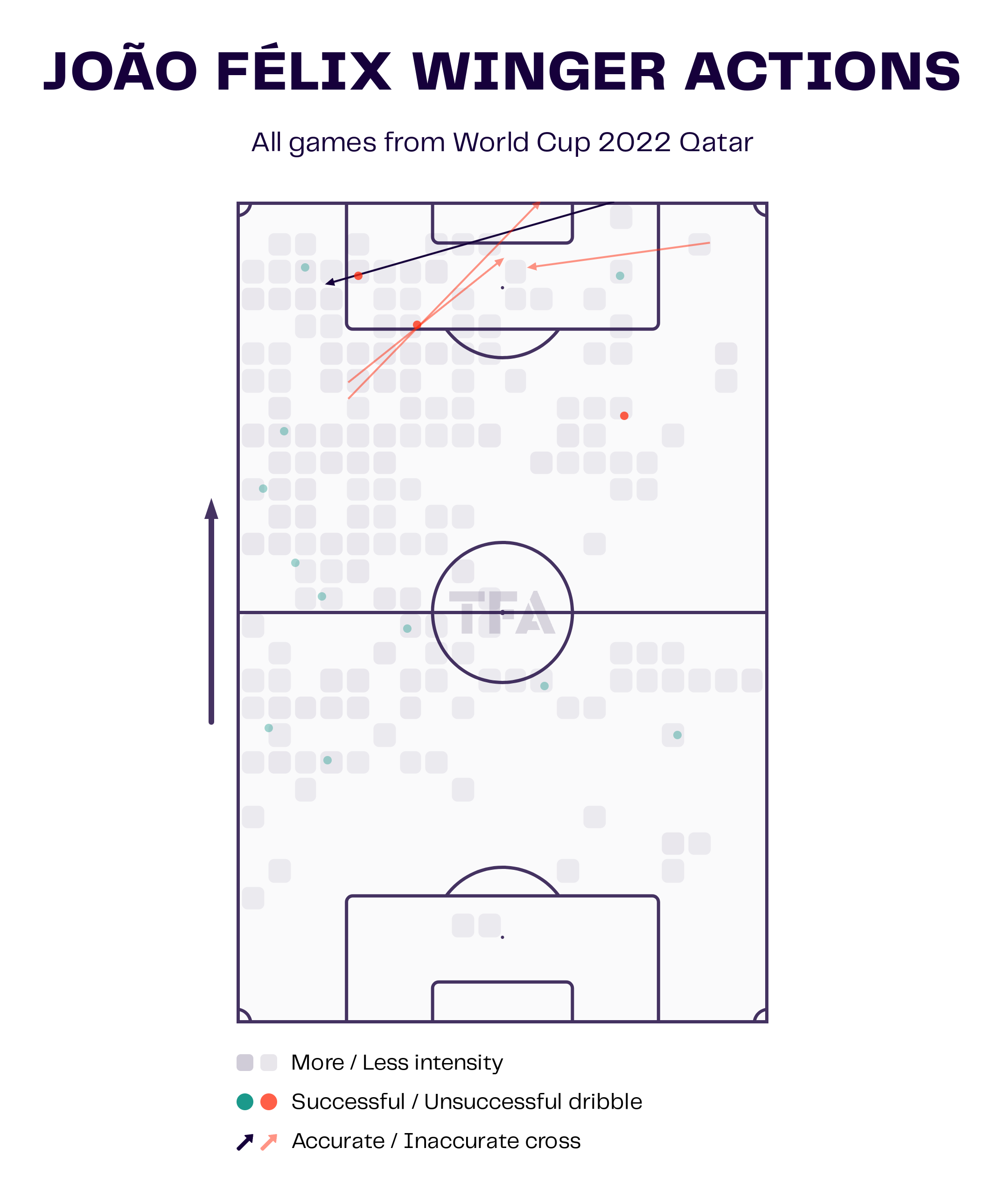 In the World Cup 2022, Joao Felix played four matches. They had three shots on target from a total of six shots and scored one goal (0.96 xG). Joo Félix averaged 29 passes per game with a 77% completion rate and two assists. Joao Felix covers most of the opposition’s half for Portugal in the World Cup 2022. He has more intensity in the final third and some movement in the middle third for Portugal. He also dribbles successfully in the middle and final thirds of the pitch.

Who would Felix replace? 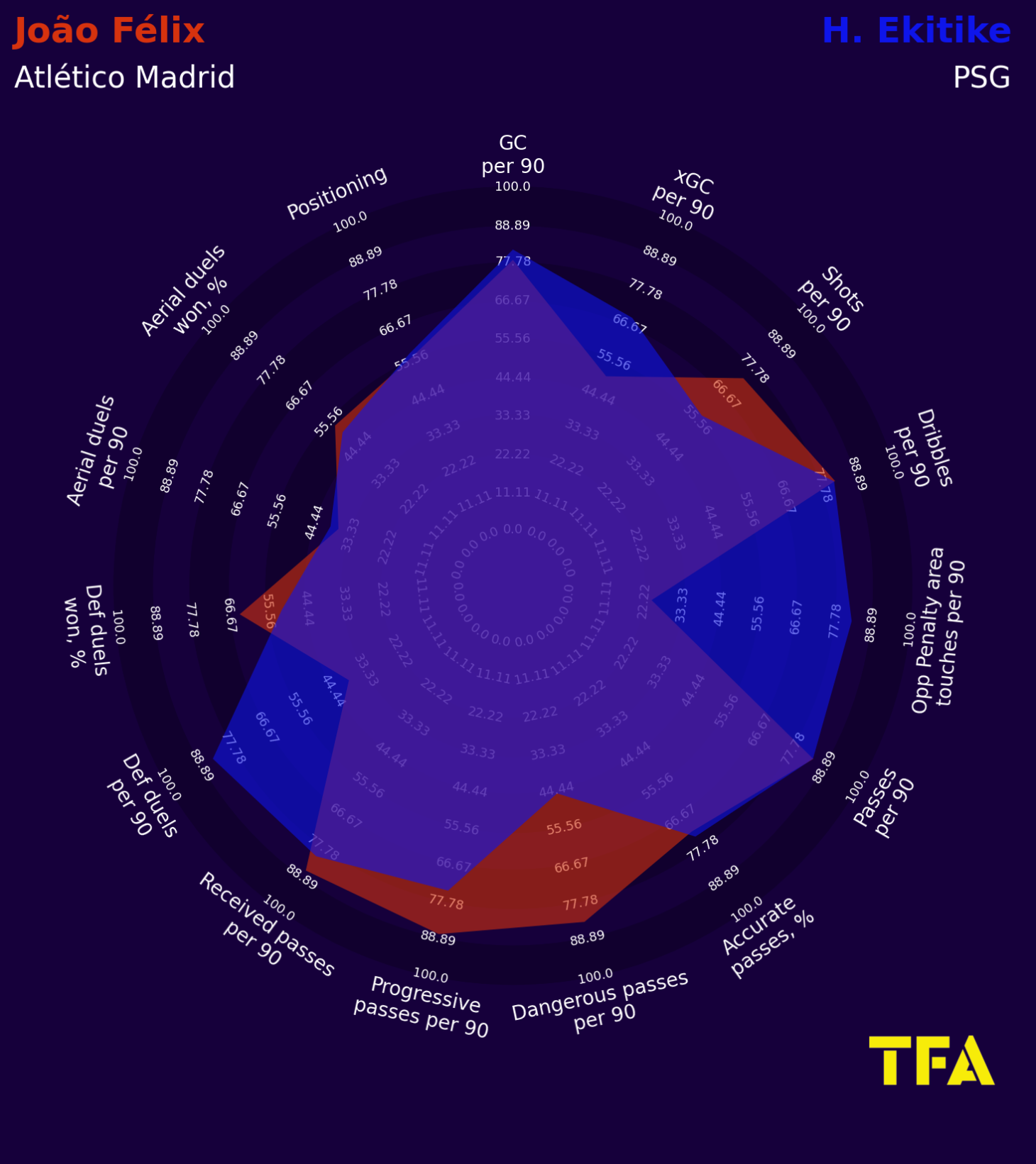 The above viz is a comparison between Joao Felix and Hugo Ekitike of PSG. In Ligue 1 2022/23, Hugo Ekitike has played two matches (plus seven as a sub). They have three shots on target from a total of five and have scored one goal (1.19 xG). Hugo Ekitike averages ten passes per game with an 88% completion rate and two assists. It can be observed from the above viz that Joao has better stats in terms of passing and progression. There is only a minute difference in terms of goal contributions and expected goals.

Given the overall stats of Joao Felix and his impressive abilities on the pitch, PSG will surely want to secure his services. In addition, the unsatisfying treatment at Atletico also means that Felix is looking for a club where he can find more minutes. Although the PSG lineup is already full of stars to build their squad around, it is unclear if they will stay at the club for long. Joao Felix is an important asset for any team, and it will be interesting to see if PSG make a move to obtain his services anytime soon.

Under the microscope: Why Rennes could end up playing Champions League...

Can Rennes finish in the top three?