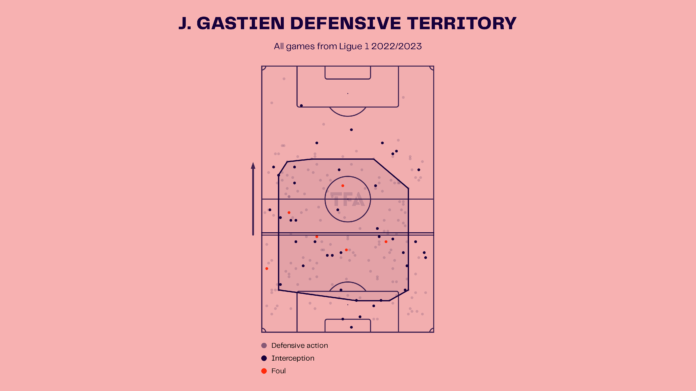 Johan Gastien, a hard-working player for Clermont, is enjoying his second season in the French top division. Despite having played in 259 games in the second tier, Johan is flourishing in Ligue 1 and demonstrating that he can compete with the league’s top players. Gastien helped Clermont narrowly avoid relegation in the second half of the 2021/22 season by frequently playing in the middle of a midfield triangle alongside Julien Berthomier and Salis Abdul Samed. After 15 games, Clermont are just one point ahead of 11th-placed Reims. Let’s now look at some stats that capture Johan’s Ligue 1 2022/23 season. 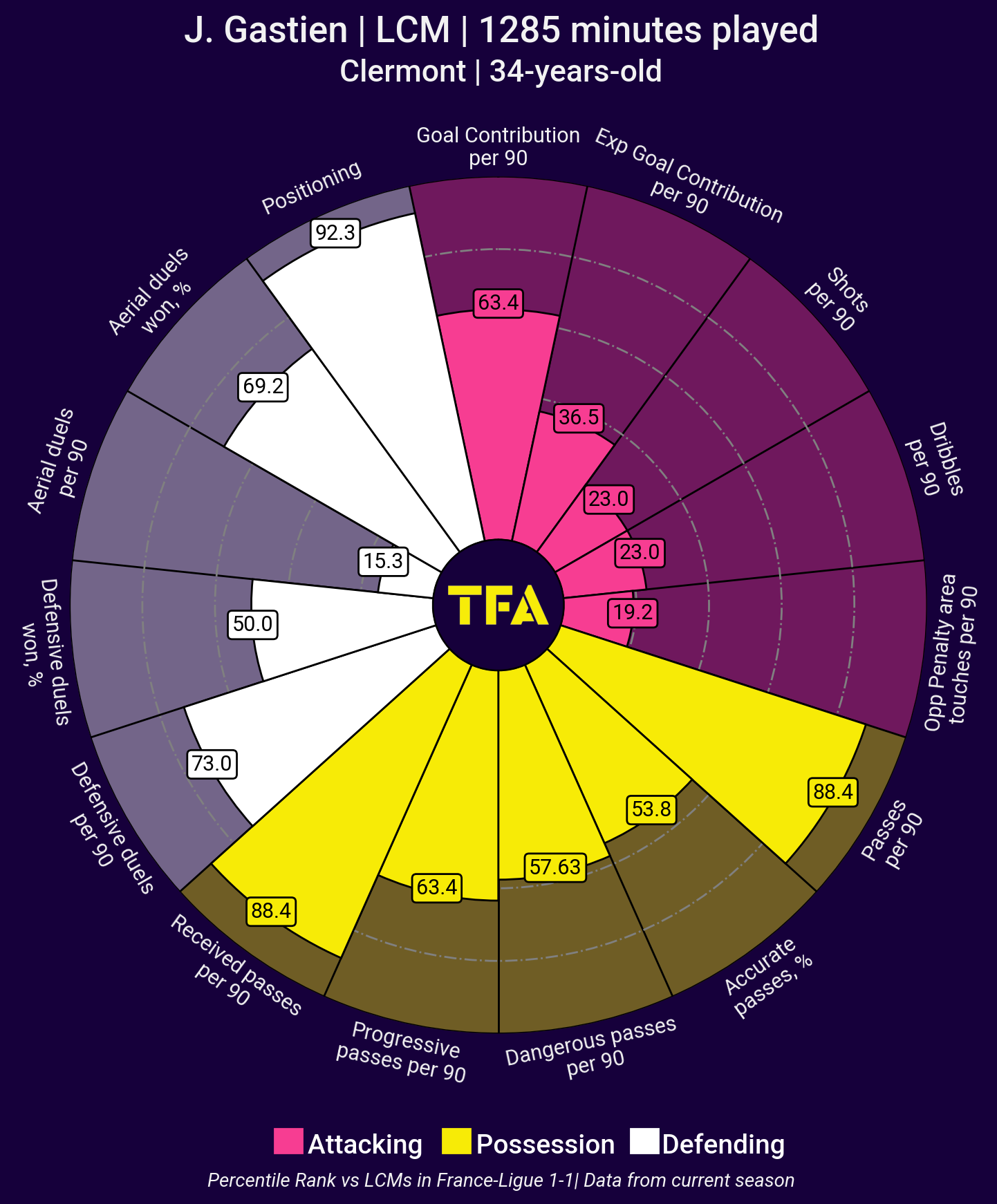 Johan Gastien usually plays as a left-defensive midfielder for Clermont. His performances this season have been impressive and provided a strong foundation in midfield. The above pizza chart shows the stats of the player in comparison to other left-centre midfielders in the French top division. It can be observed that the player is ranked highly in terms of positioning, aerial duels won, and defensive duels won. He is also ranked well for passes per 90 and received passes per 90. Being a defensive midfielder, Gastien does not have many contributions in terms of attack. He does not progress much forward with the ball; instead, Gastien is the man who receives the ball and releases it for the team to progress up the pitch. 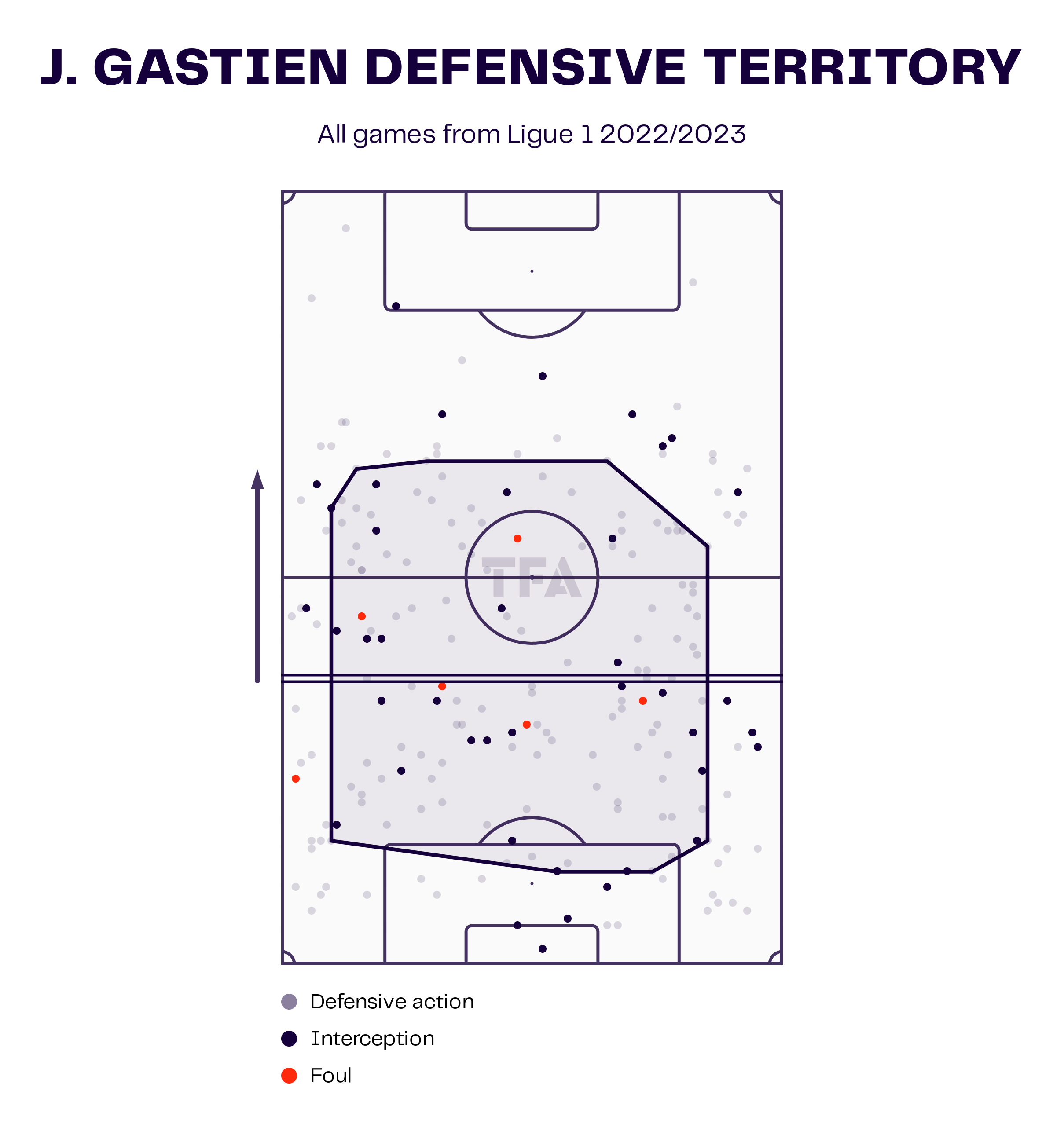 Clermont does not play with an extremely high backline; they tend to sit back close to their defensive third. This enables the midfield to be tucked in with the defence, especially the defensive midfielders. The above viz shows the defensive territory of the player. It indicates that Gastien is involved in a lot of defensive actions in the defensive third. Overall, he has a percentile of 50% for defensive duels won and a 68% win rate for aerial duels. He also makes interceptions inside the box as well as in his defensive third. 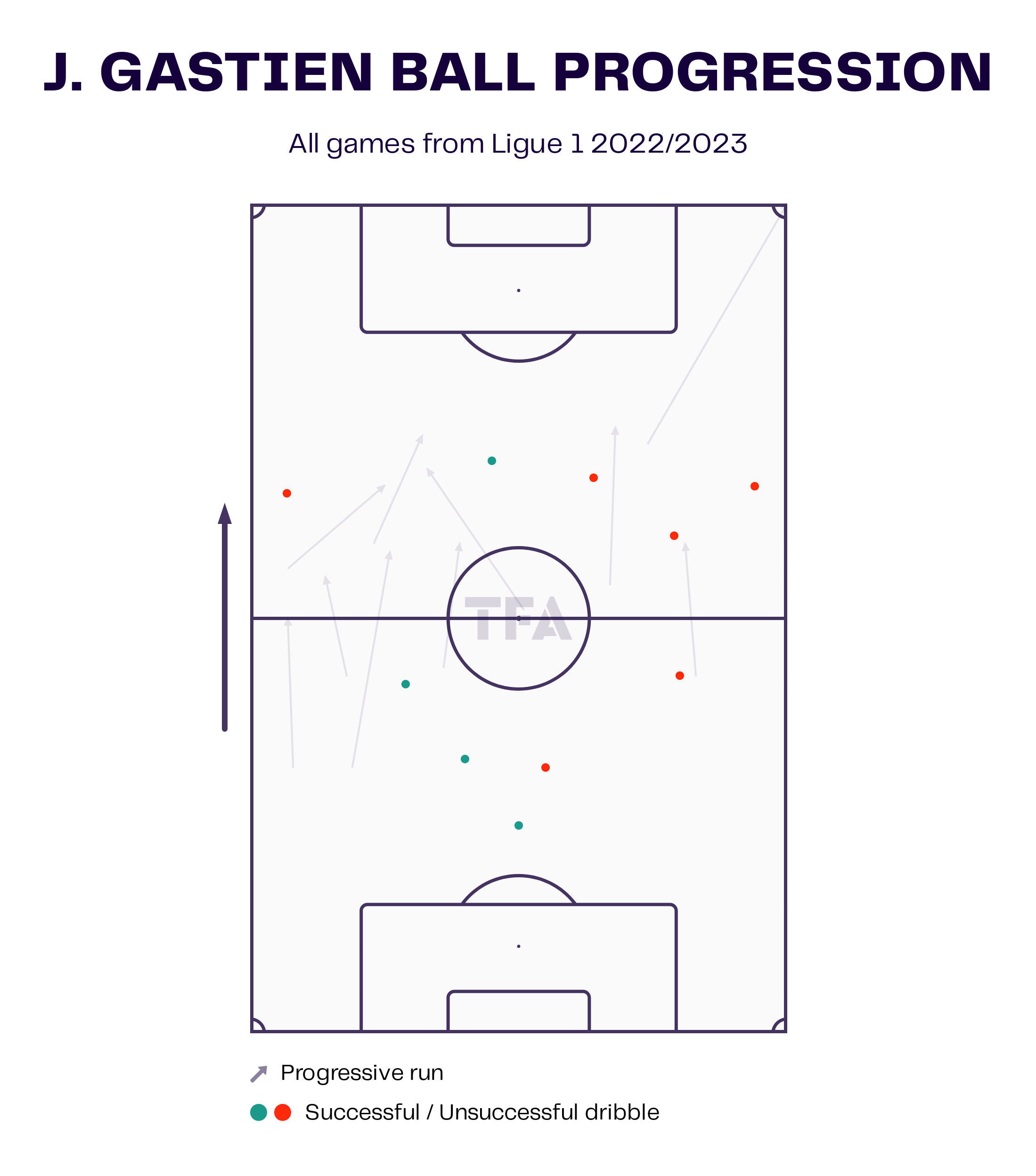 In terms of ball progression, Johan Gastien has made four successful attempts at dribbling. They are inside his own half, and one of them is in the opponent’s half. He also made progressive runs up the pitch in order to move the ball forward and make plays with the flanks or forwards. As a defensive midfielder, Johan is not as attack-minded as other central midfielders. 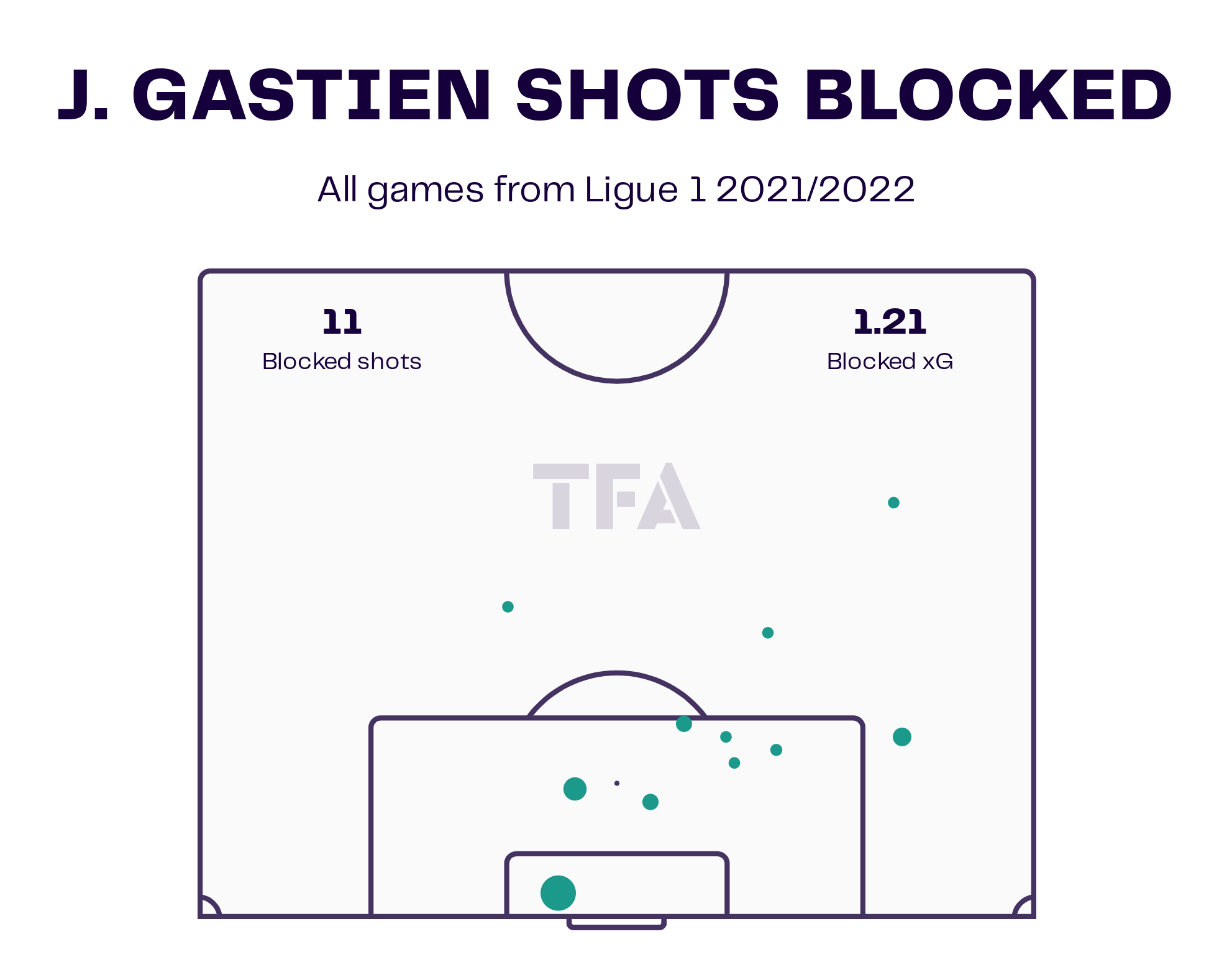 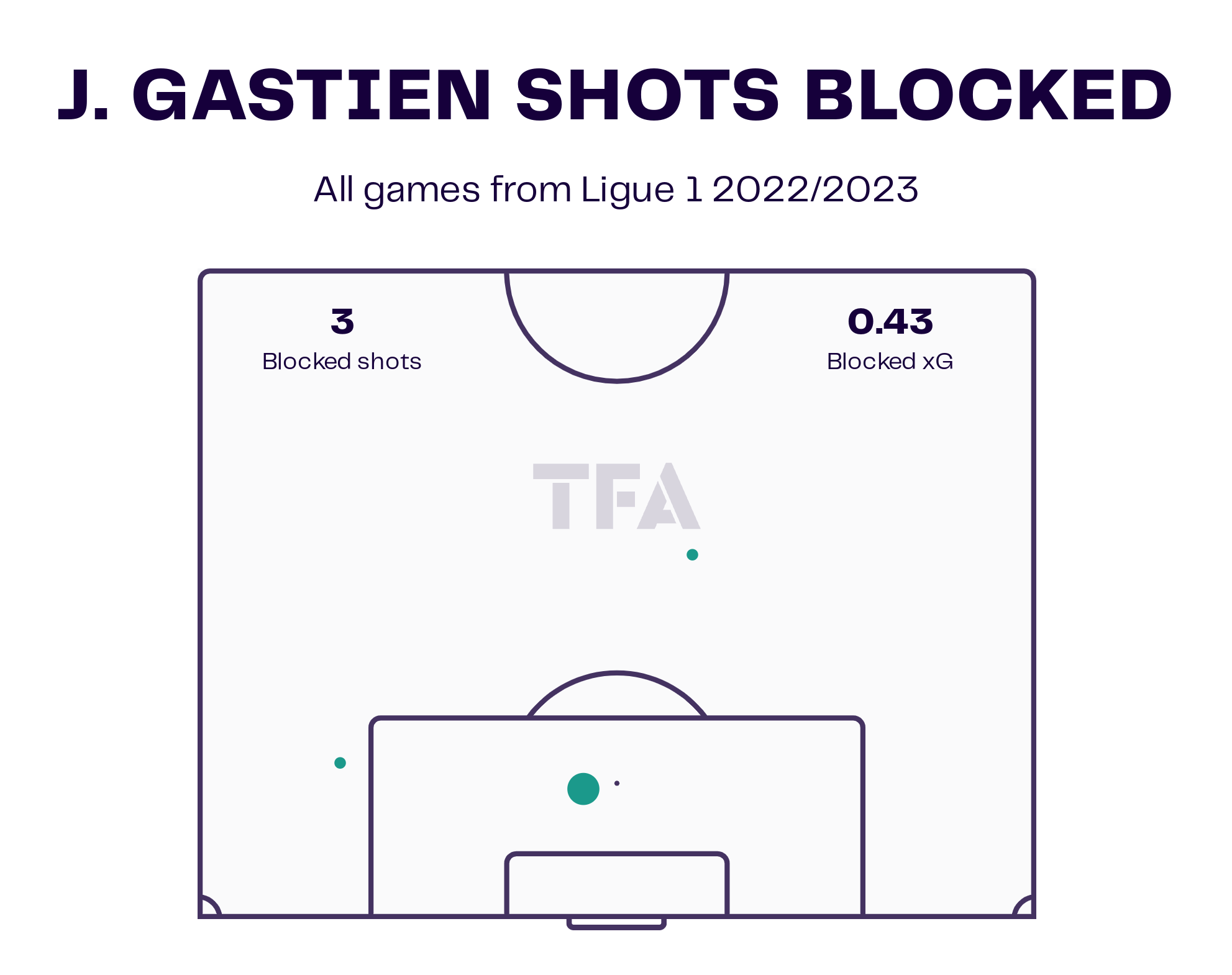 The above viz represents the shots blocked by Johan Gastien in the Ligue 1 seasons of 2021–22 and 2022–23, respectively. In the 2021/22 Ligue 1 season, Gastien has blocked a total of 11 shots with an xG of 1.21, most of them from inside the box. Currently, in the 2022–23 season, he has three successful blocked shots and a blocked shot xG of 0.43. It can be observed that Gastien is very active in defending and supporting the backline since he has a defensive style of play. 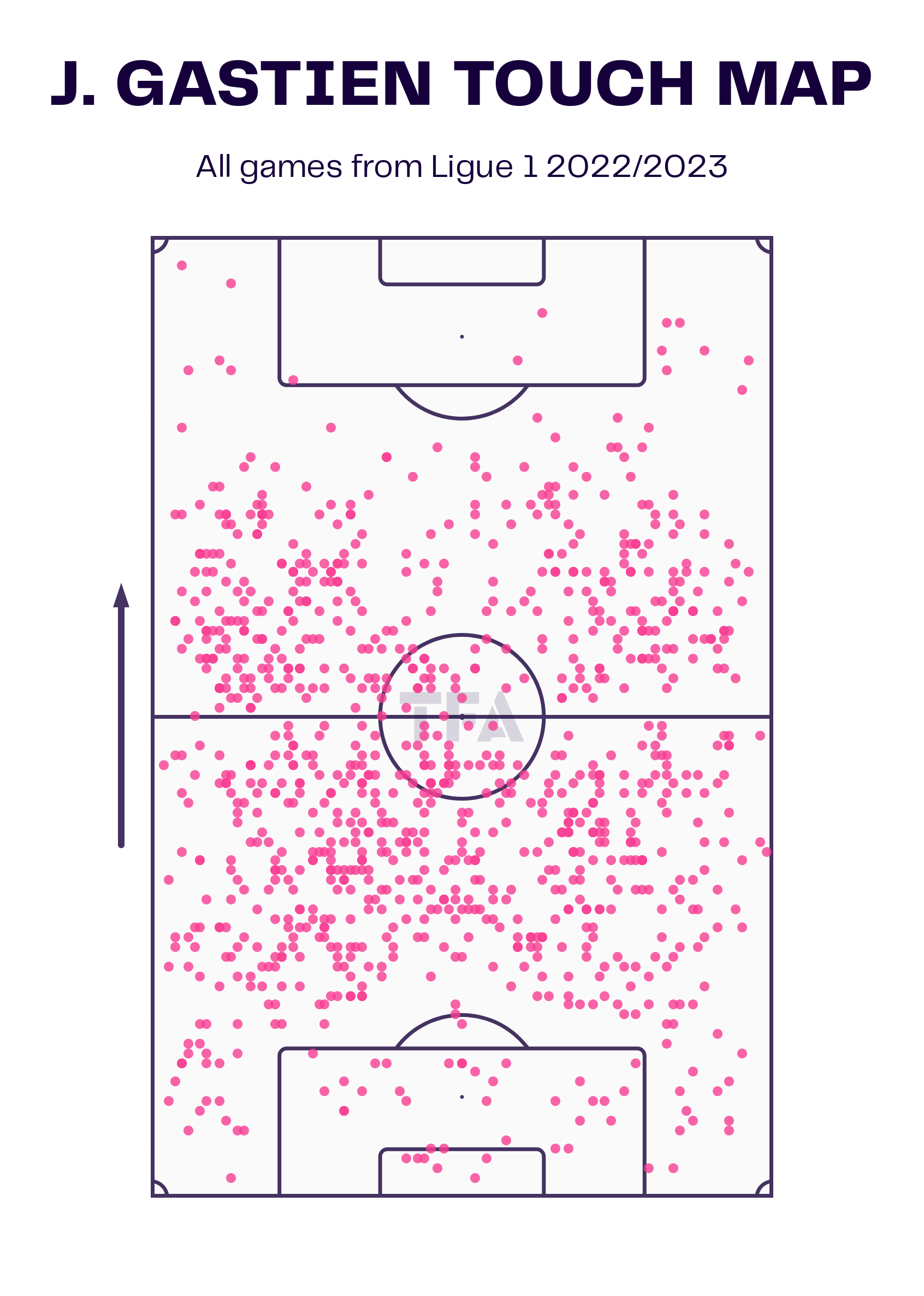 Johan Gastien is responsible for preventing the opposition from penetrating the centre of the pitch. His positioning is such that there can be maximum efficiency in making interceptions. The above viz depicts a touch map for Gastien in the 2022–23 Ligue 1 season. It can be observed that he gets most of his touches in the defensive third. As a defensive midfielder, he spends a lot of time in the middle third of the field. In terms of the overall movement and intensity on the pitch, Gastien performs his duties almost all over the pitch. He has more intensity in the middle third and near the halfway line. Gastien also helps out the defence by dropping back and covering areas in the defensive third.

Finally, it appears that Gastien is a player who is familiar with other players’ defensive positioning. His ability to position himself in defensive areas gives his team an advantage. This is because he is able to stop the opponents’ attacks in a split second and enable a counterattack for his team. This is an uncommon skill for a defensive midfielder, and the ability to move and position efficiently on the field can always be decisive for a team.

The making of Paris Saint German as amongst top sports brand...