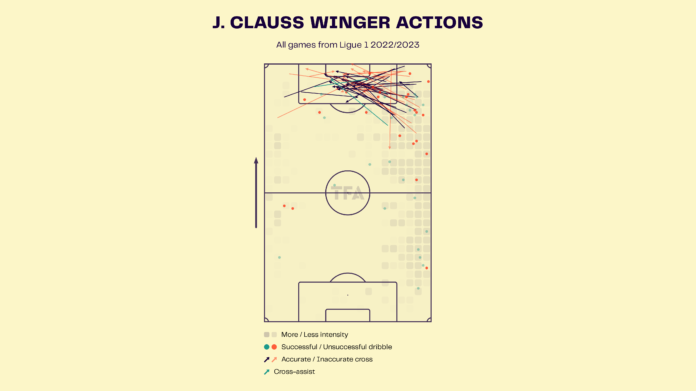 Jonathan Clauss is a French professional footballer who plays as a right-back for Ligue 1 club Marseille and the France national team. As a defender, Jonathan Clauss has conceded nine goals and kept five clean sheets in 16 matches in the Ligue 1 2022-2023 season. That means when Clauss is on the pitch, his team concedes a goal every 136 minutes. Moreover, Jonathan Clauss has scored one goal so far and has assisted seven goals in 16 matches in Ligue 1. He joined the team from Lens last season and has already proven that he is valuable to his team despite his age of 30. He has shown plenty of experience in his position and has provided firepower as well as defended in a solid manner on the flank. Below are some of his stats from the current season highlighting his impressive performance for Marseille. 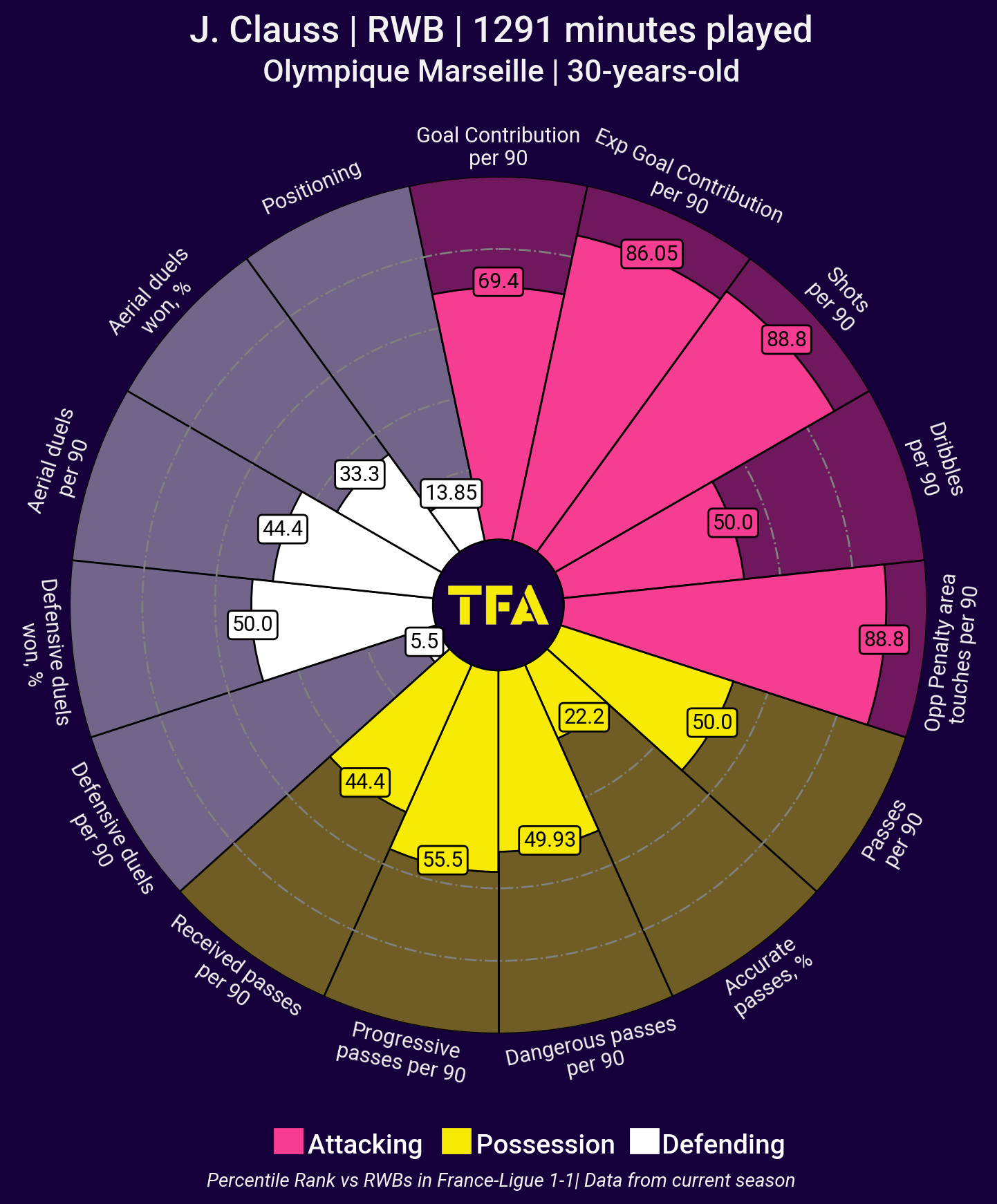 The above viz shows the percentile rank of the player in comparison to other players in Ligue 1. Clauss is an excellent right wing-back, a big threat in front of the goal, and ranks among the top for goal contributions. Overall, he ranks highly in expected goals per 90, shots, and touches in the opposition’s penalty area per 90, proving to be an extremely efficient resource for the team. Clauss gets 3.56 touches in the opposition’s penalty area per 90 minutes.

A valuable asset in the attack 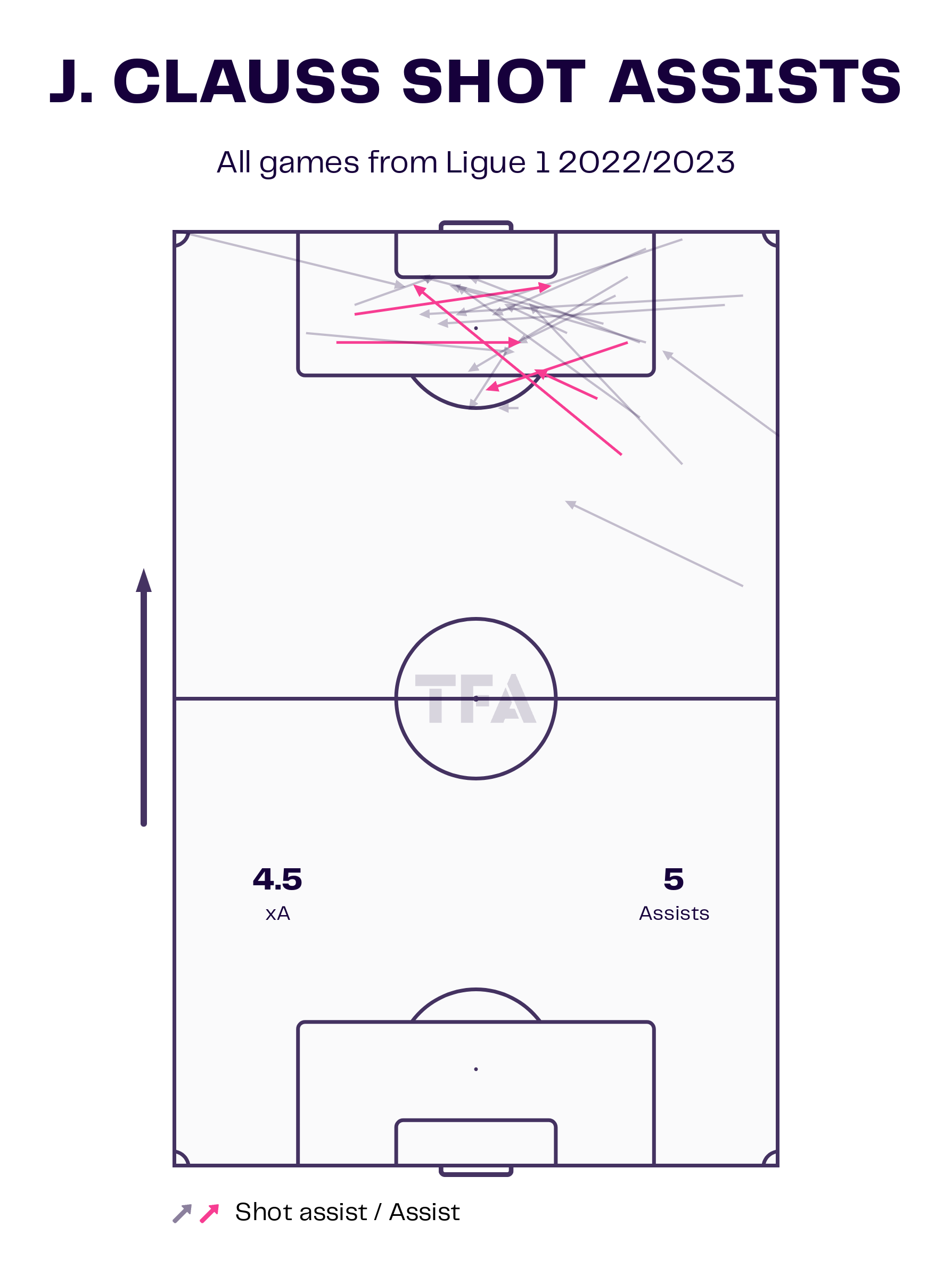 The above viz is a representation of shot assists for Jonathan Clauss. With five assists, Clauss has an xA of 4.55 for the matches played. He averages 0.35 assists in the current season and makes 1.6 shot assists per 90. Most of the actions have been taken inside the box, with some in the final third. He makes 4.51 passes into the final third per 90 with an accuracy rate of 69.2%. He averages 3.2 passes into the penalty area with a pass accuracy of 72%. 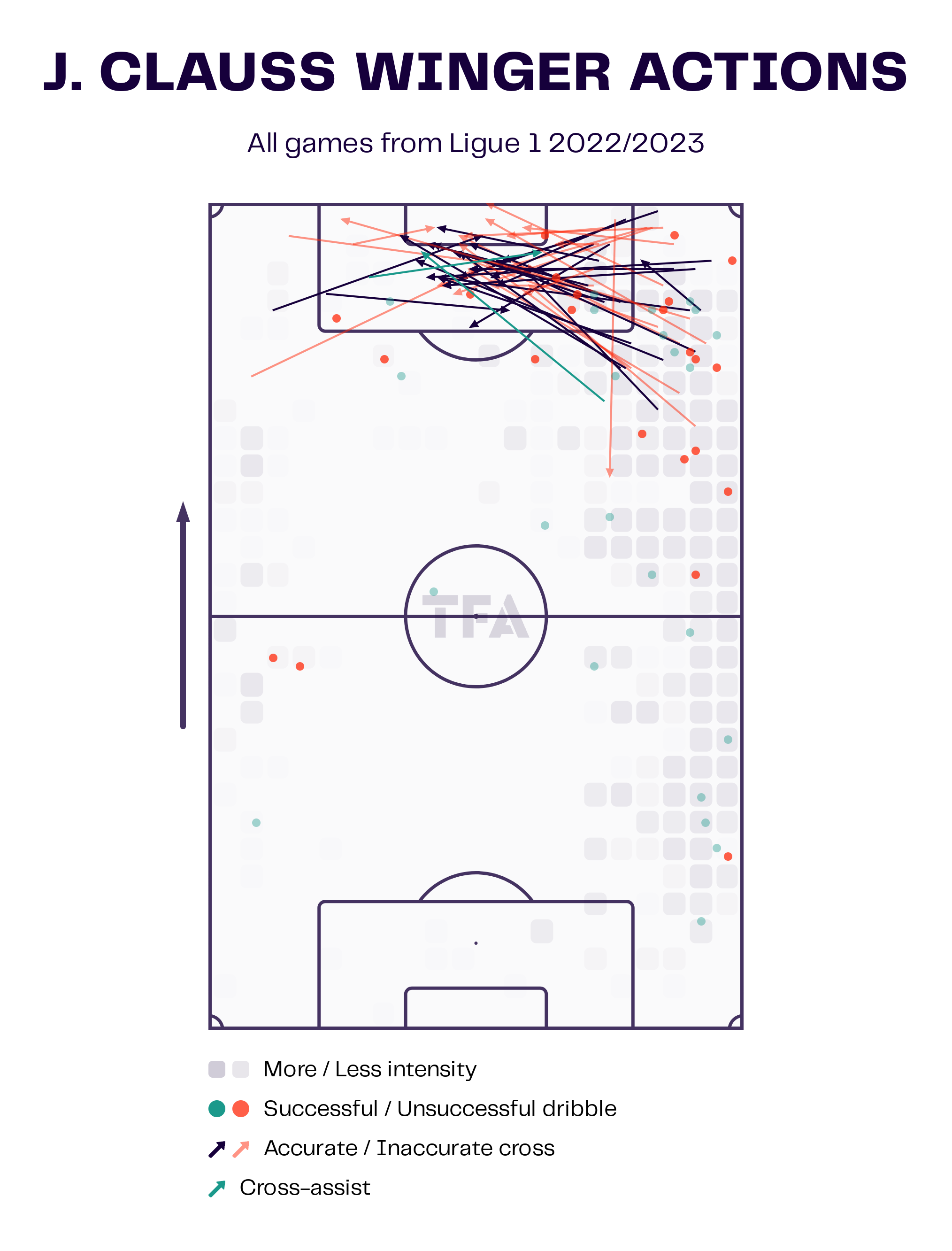 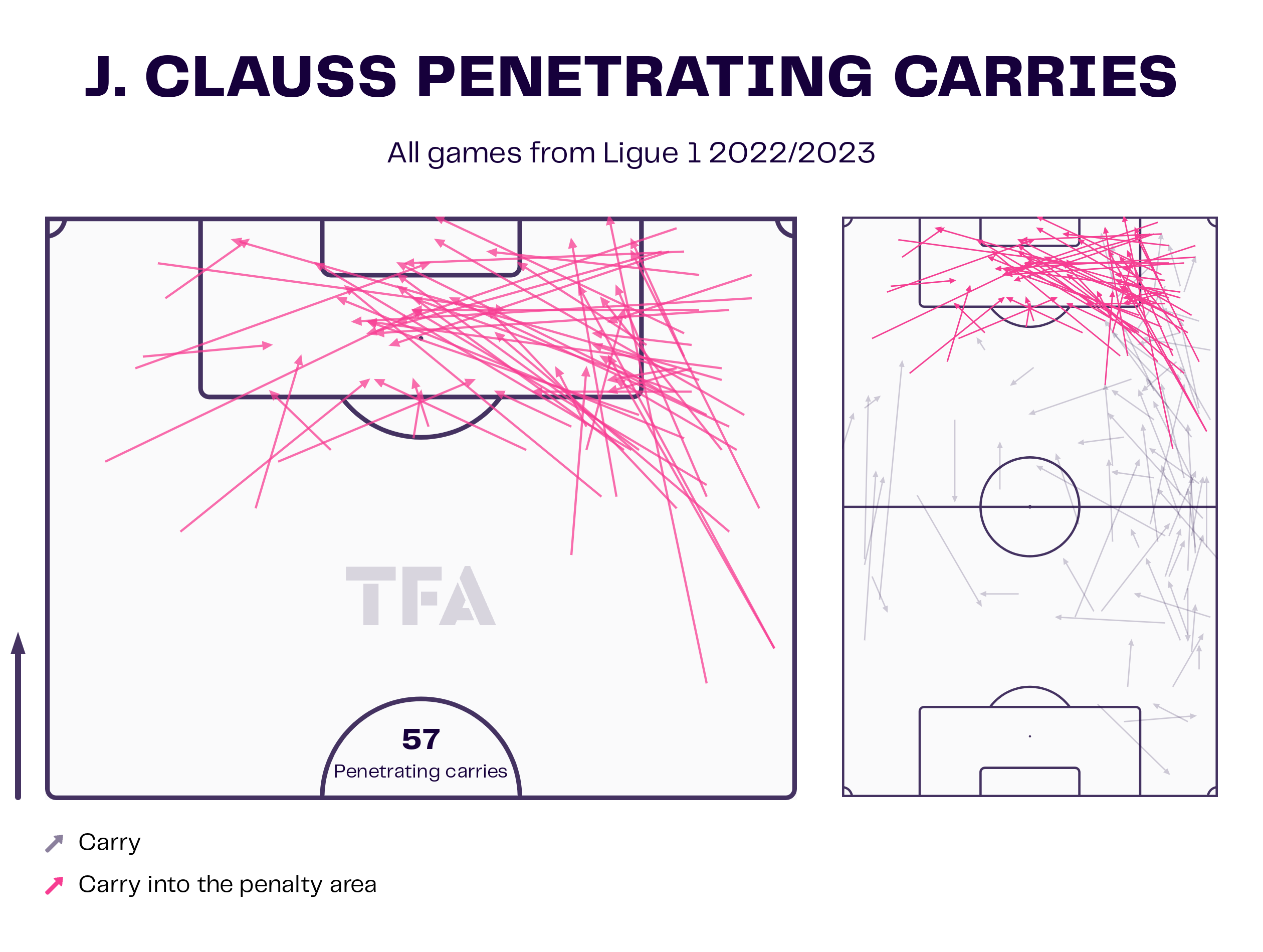 The above viz depicts Clauss’s winger actions and penetrating carries in the current Ligue 1 season. Jonathan attempts to dribble in the middle third as well as the final third. The number of successful dribbles is decent in the midfield and goes on to increase in the final third. There are many attempts to cut inside from the flanks on the right wing as well. Additionally, he also makes 3.76 crosses per 90 with 46.3% accuracy.

Jonathan Clauss likes to play direct football through the flanks. He attempts 3.28 dribbles per match with 51.1% successful dribbles, and this has been a crucial advantage for the player and his team. Most of his action is in the middle and final third of the pitch. His confidence and ability to move the ball forward in the final third have been a major threat to opponents this season. He averages 2.09 progressive runs per match and makes penetrating carries into the penalty area. Clauss has made a total of 57 penetrating carries for Marseille in Ligue 1 this season. 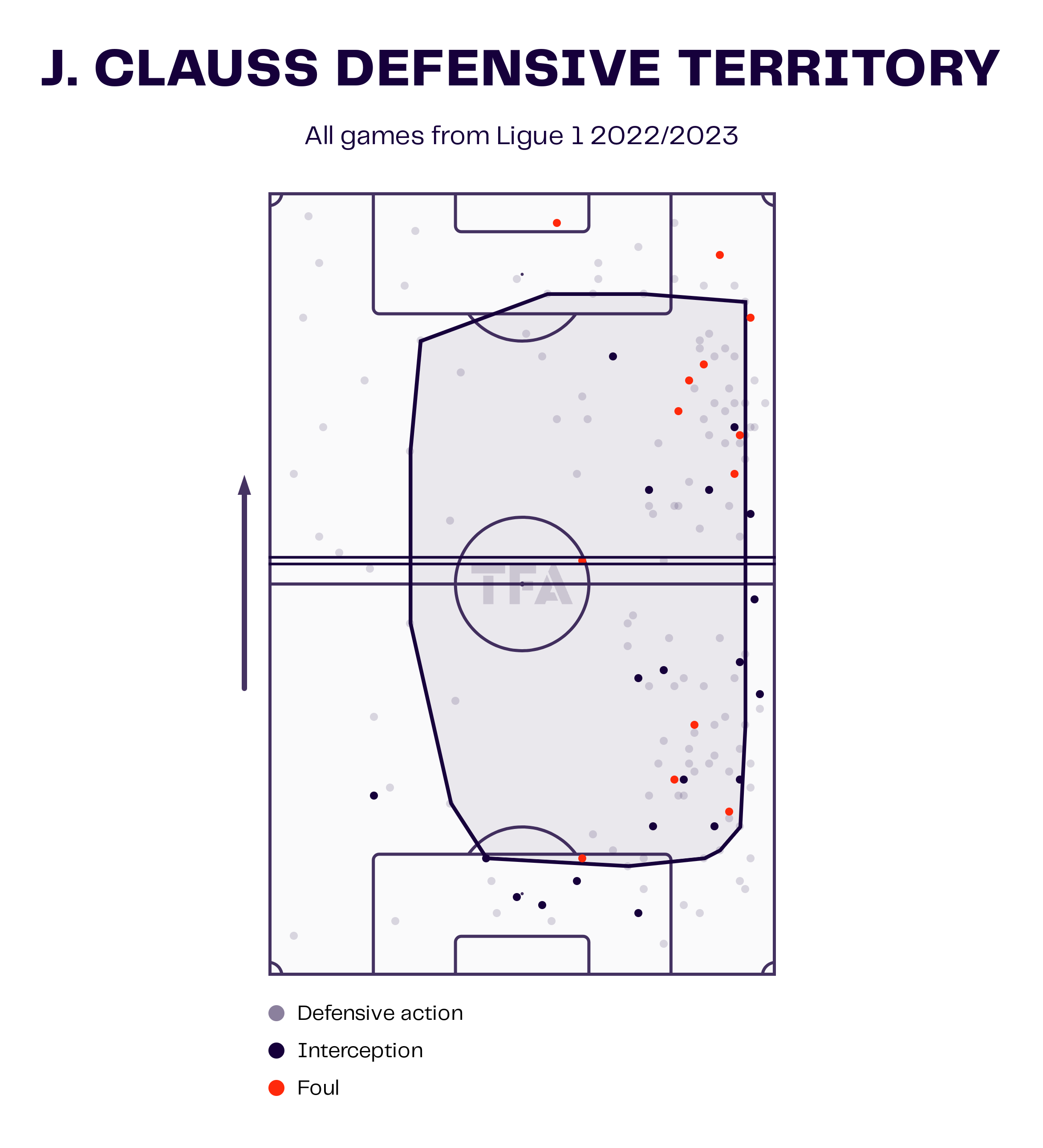 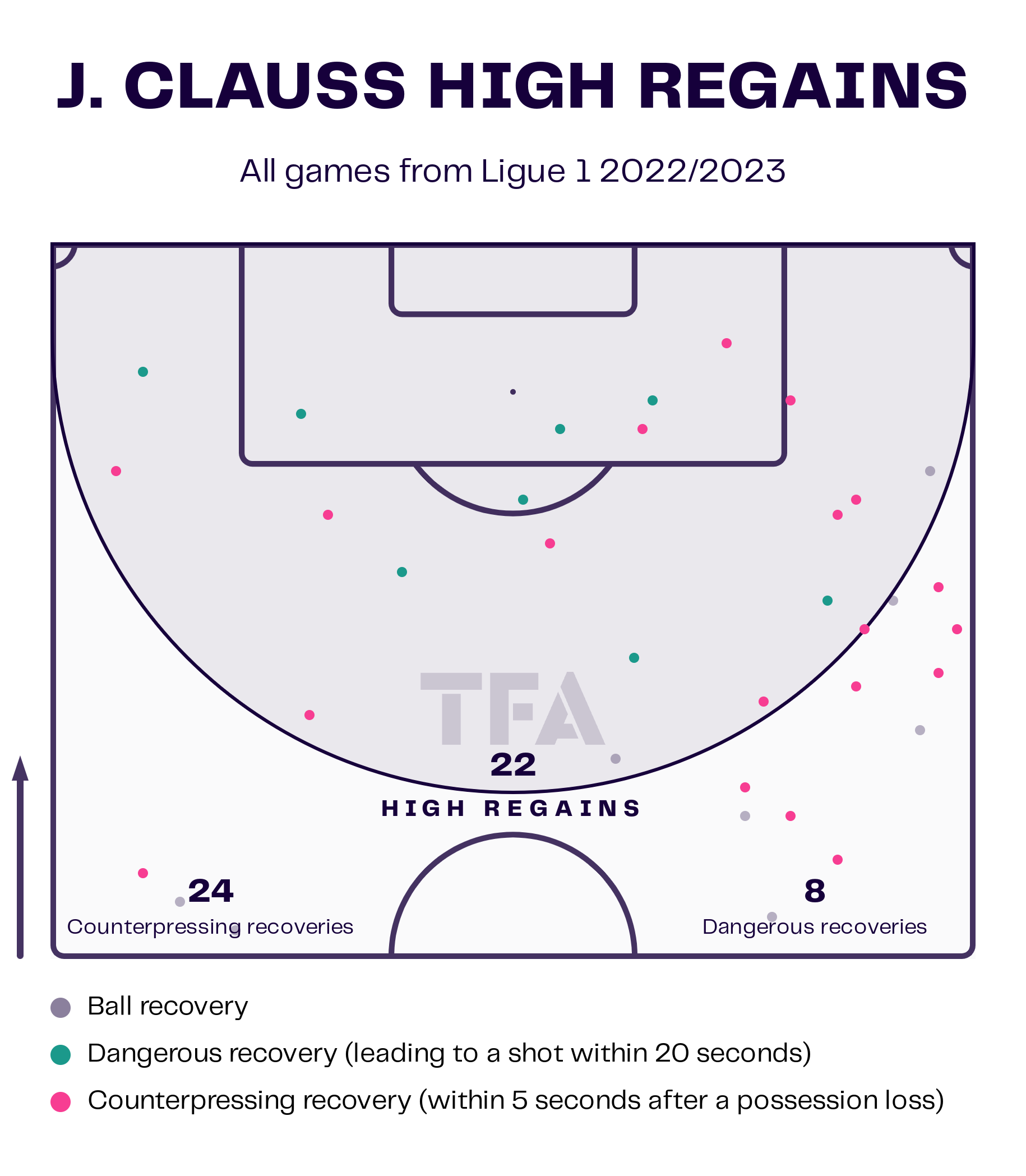 The above viz shows the defensive territory and various high regains of the player for Marseille in Ligue 1 2022/23. It indicates that he is involved in a lot of defensive actions in the middle third and makes interceptions near the middle and final thirds. Clauss averages 0.91 fouls in the current season. Overall, he has an average of 14.63 duels per 90 and a 44.8% win rate. Clauss averages 2.86 interceptions per 90 minutes and takes on 4.18 defensive duels, winning 59.5% of them per 90 minutes. It can be seen that he has made 22 high regains, 24 counter-pressing recoveries, and eight dangerous recoveries. He makes 6.13 recoveries in the opposition’s half per 90. 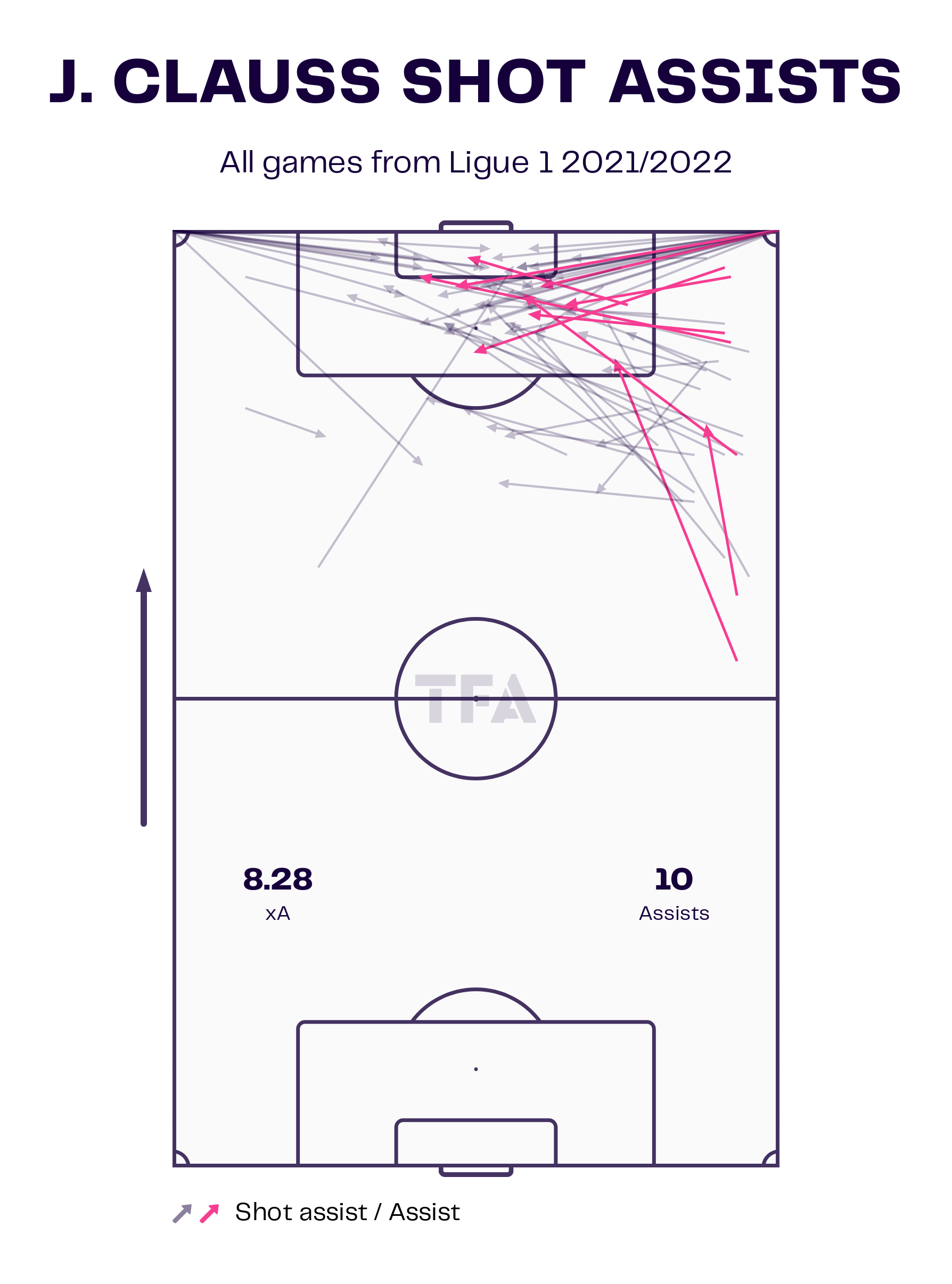 The above viz is a representation of shot assists for Jonathan Clauss from last season. With ten assists, Clauss had an xA of 0.23 per 90 for the matches played. Last season, he averaged 0.28 assists and made 1.92 shot assists per 90 minutes. He has already racked up half the number this season and seems to be improving on his performances from last season.

Overall, Clauss has been in sensational form for Marseille on the right flank. His performances in the attack, providing crucial assistance, have led to Marseille being in much better form this season. His presence on the field has aided the team in both attack and defence, and his overall ability to contribute to the team is extremely valuable for Marseille.

Under the microscope: How the Brazilian has fared in his second...

Under the microscope: Why Montpellier is hovering above the relegation zone

Under the microscope: How has this veteran forward aided Lens’ attack?