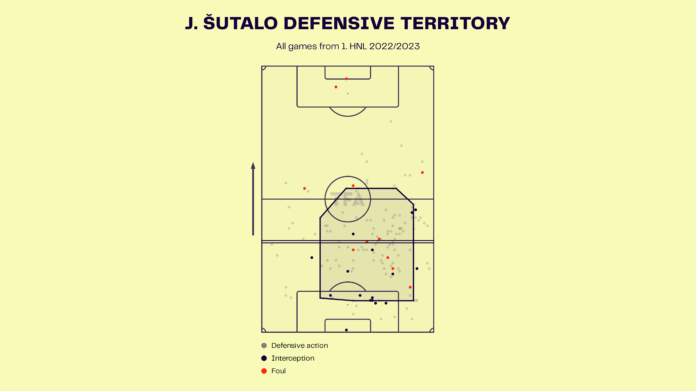 Josip Sutalo is a Croatian professional footballer currently playing as a defender for Prva HNL club Dinamo Zagreb and the Croatia national team. His impressive performances in defence for club and country have raised many eyes, and of the pair, belongs to Ligue 1 side Monaco, who are in hot pursuit of the player. Sutalo is a defender who has appeared in nine matches this season in the Premier League, playing a total of 748 minutes. Josip Sutalo has scored a total of one goal so far this season in the league. As a defender, he has conceded seven goals and kept two clean sheets in nine matches in the Prva HNL 2022–2023 season. That means when Sutalo is on the pitch, his team concedes a goal every 100 minutes. Sutalo has been a regular for Dinamo Zagreb during the 2022-23 season. He has played three times in the UCL and also starred as the Croatian champions stunned Chelsea in the UEFA Champions League. Below are some of the players’ stats for the current season. 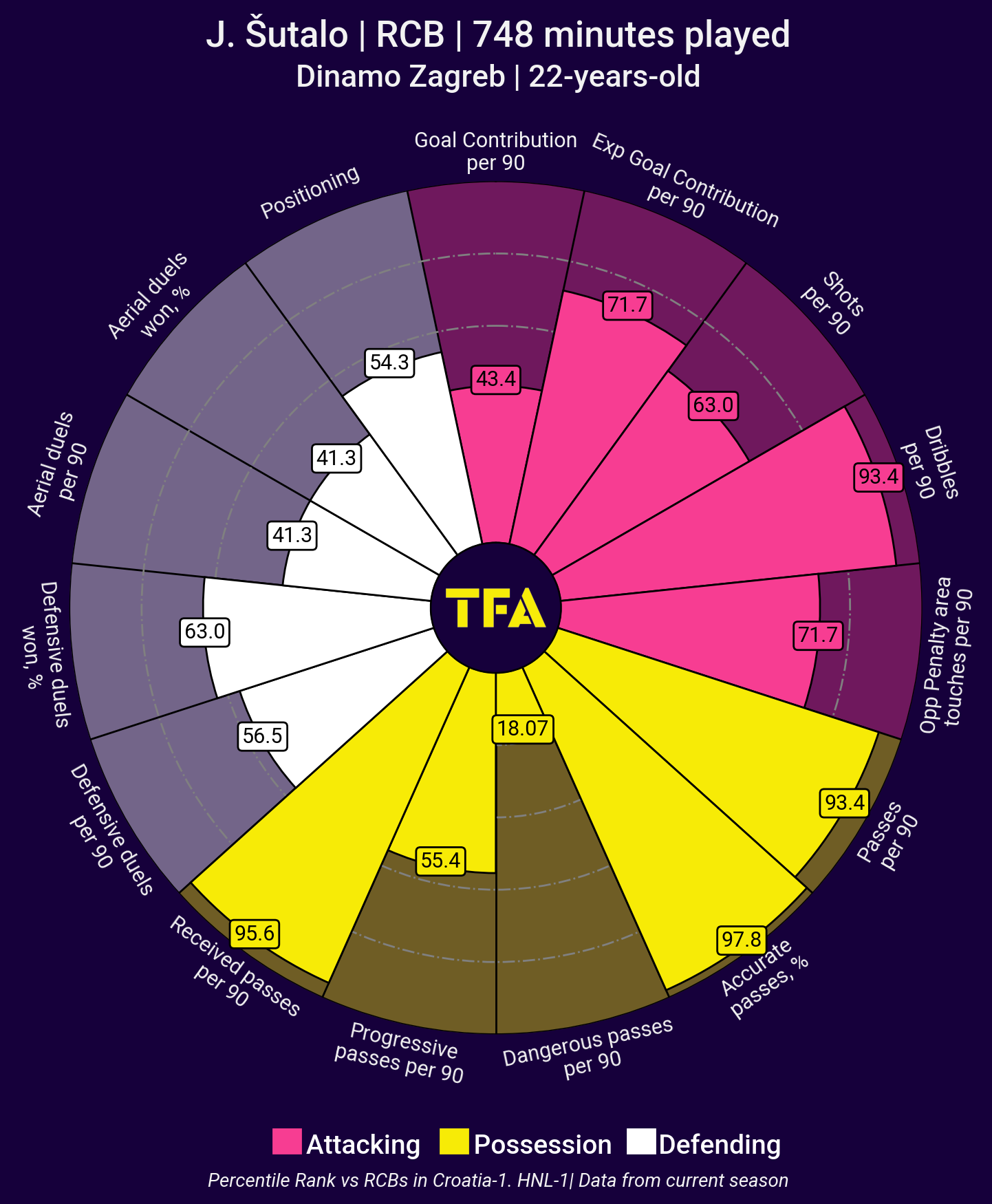 The pizza chart above depicts his percentile rank in comparison to the other centre-backs in Croatia’s top flight. Josip’s offensive capabilities have been significant for Dinamo Zagreb. He is ranked highly for dribbles and shots per 90 minutes and has a high expected goal contribution. He is ranked high for accurate passes and passes per 90, and this has been a crucial advantage for the player and his team. Defensively, he has fair numbers compared to other centre-backs in the Croatian League. He ranks fairly in terms of aerial and defensive duels won.

Movement across the pitch 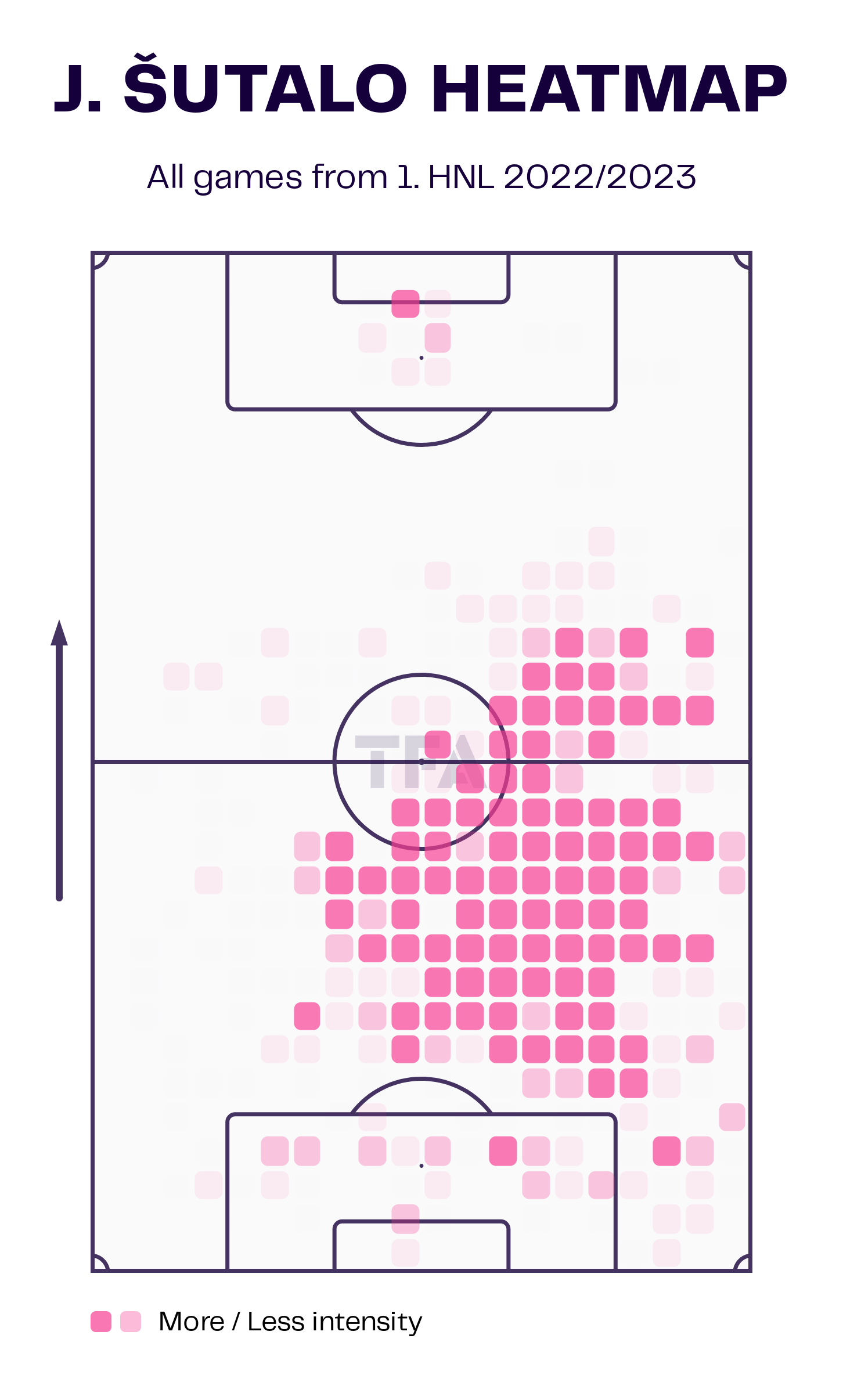 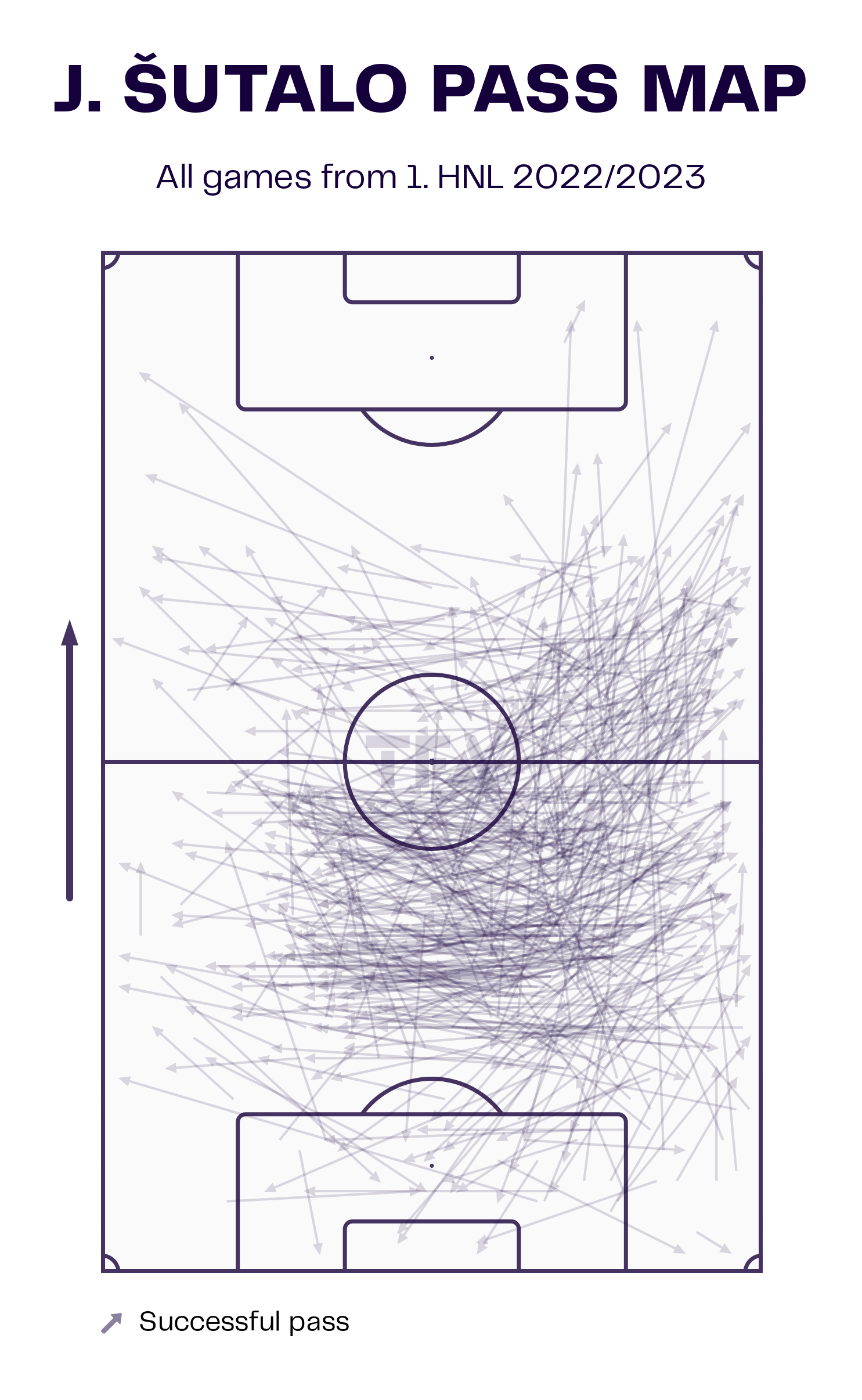 Josip Sutalo covers the central defensive area in the defensive and middle thirds for Dinamo Zagreb. He performs defensive duties as a centre-back, and most of his intensity can be seen in the defensive third of the pitch for his team. He makes 1.08 progressive runs per 90 minutes and mostly prefers to release the ball into the midfield or wider areas, averaging 22.86 forward passes per 90 minutes. Additionally, he manages to make 6.38 passes to the penalty area per 90, having 80.1% accuracy. 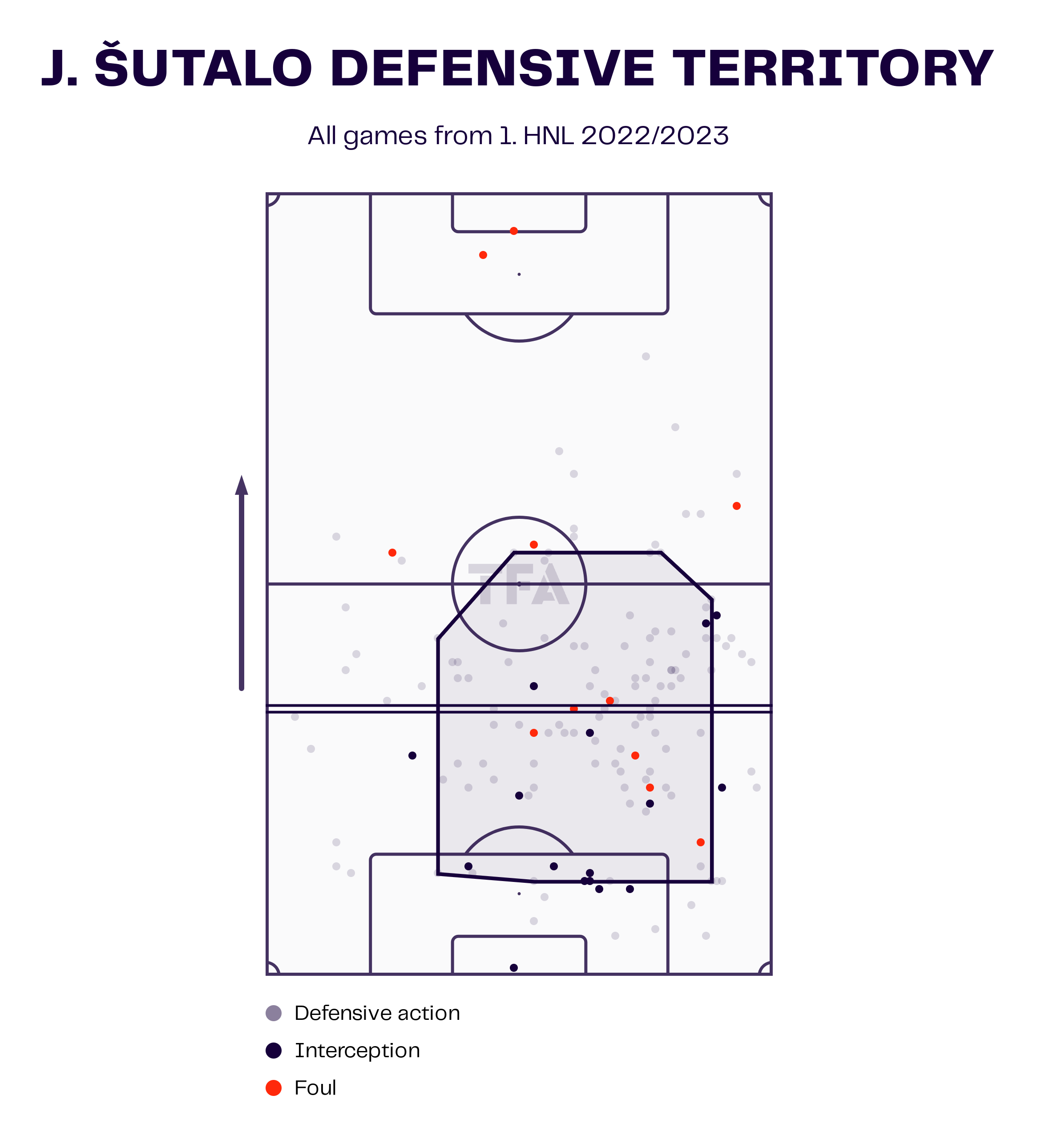 Pressing high up the pitch 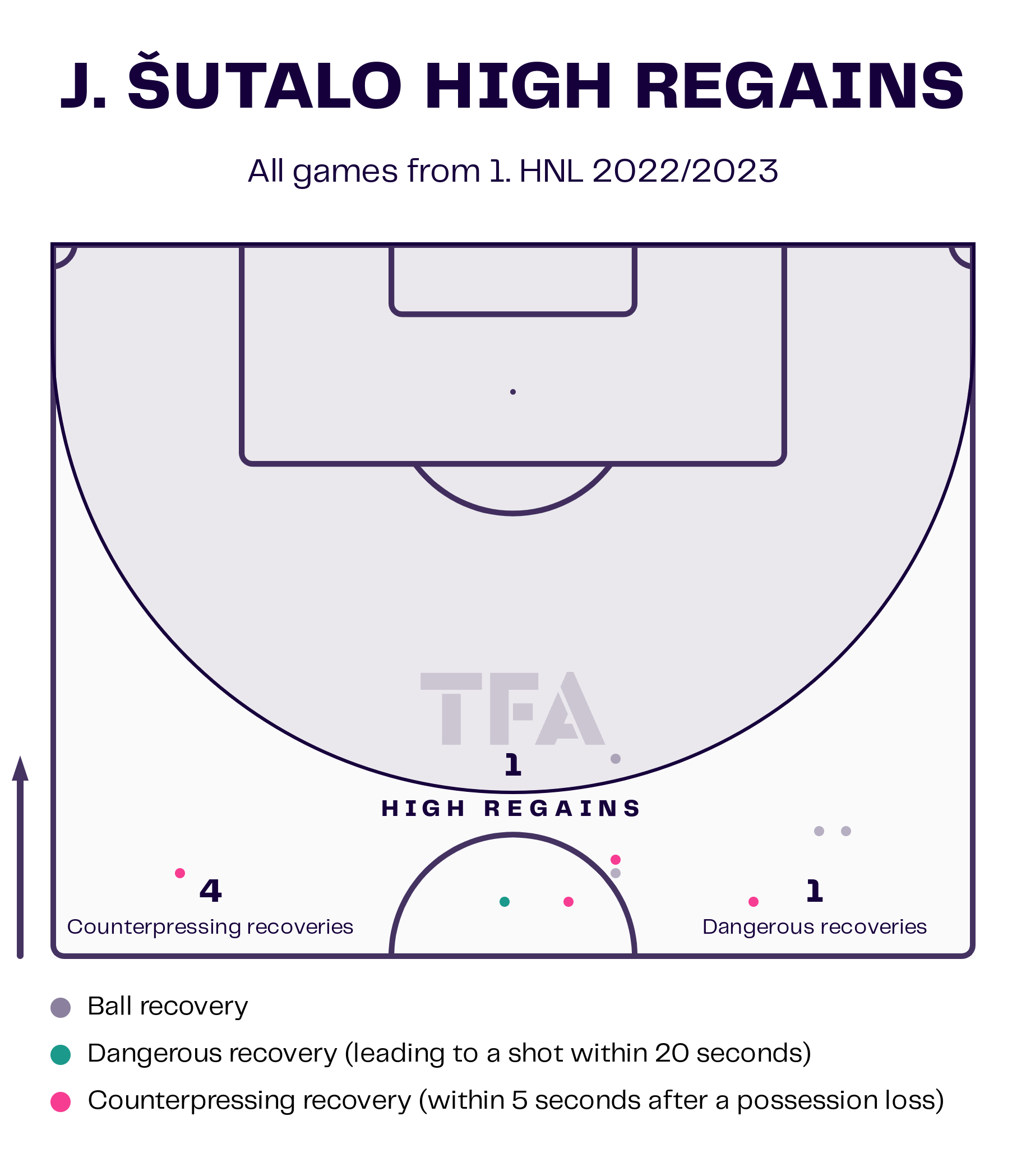 Josip Sutalo makes occasional movements in the opposition’s half in order to put high pressure on the opposition’s midfield and final third. The above viz represents various high regains made by Sutalo for Dinamo Zagreb in the 2022–23 Croatian HNL season. It can be seen that he has made one high regain, four counter-pressing recoveries, and one dangerous recovery. Additionally, the player attempts 0.36 shots per 90, with a shot accuracy of 40% for attempted shots. Overall, he is a player with a good ability to press forward as well as halt the opposition from transitioning into an attack. 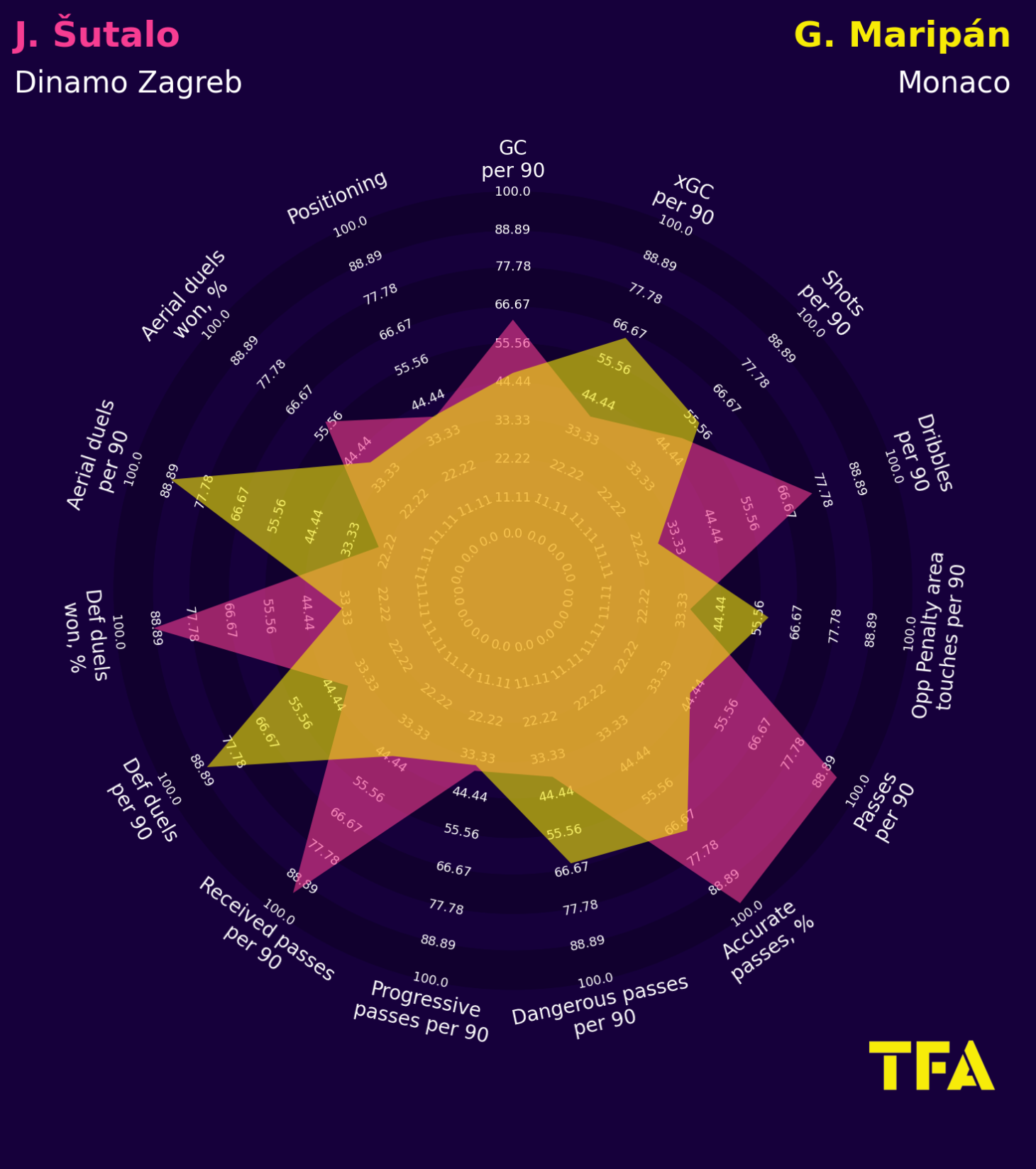 The above viz is a comparison between Josip Sutalo and Guillermo Maripan for the matches played for their teams, Dinamo Zagreb and Monaco, respectively. Sutalo has done well in defence and has better numbers in terms of defensive duels and aerial duels won. Guillermo, on the other hand, does not have any advantage over Sutalo and only performs slightly better in terms of dangerous passes. Josip has impressive passing abilities and has made more accurate passes. Josip will be an excellent replacement for the ageing Maripan, and he is already outperforming her in terms of overall stats.

Overall, Sutalo looks like a useful player, and crucially, he’s got bags of potential. He would complement the team nicely and help Monaco secure a player who could become a future star. Sutalo looks like a promising player, but signing him won’t be easy. That said, the player will have other clubs interested in him, and the French side will need to fight tooth and nail to bring him to Ligue 1.

‘Hour of need’- AC Milan could regret loss of Leonardo to...

PSG president confident his name will be cleared

Under the microscope: How a loan spell to Lille has worked...