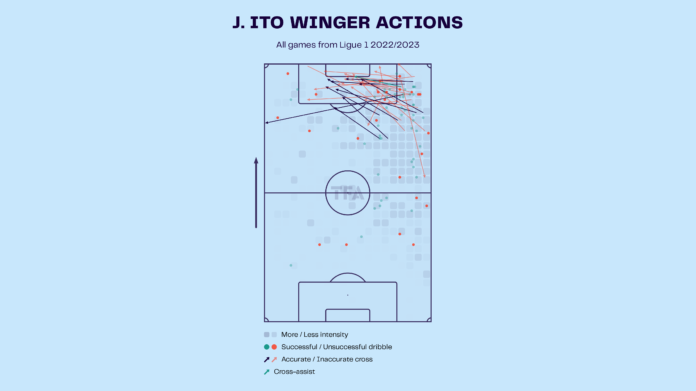 Junya Ito is a Japanese professional footballer who plays as a winger for Ligue 1 club Reims and the Japan national team. Since moving to Ligue 1, Ito has shown that he can play in France with confidence. Ito has four goals and one assist in ten games in the Ligue 1 2022–23 season so far. Ito currently has 43 caps for his national team, Japan. He has scored nine goals and had ten assists for the Blue Samurai at the international level. Junya Ito started in both victories over Spain and Germany as well as the last-16 defeat to Croatia in Qatar. Below are some stats and visuals with respect to Junya Ito’s Ligue 1 2022/23 and World Cup 2022 performances so far. 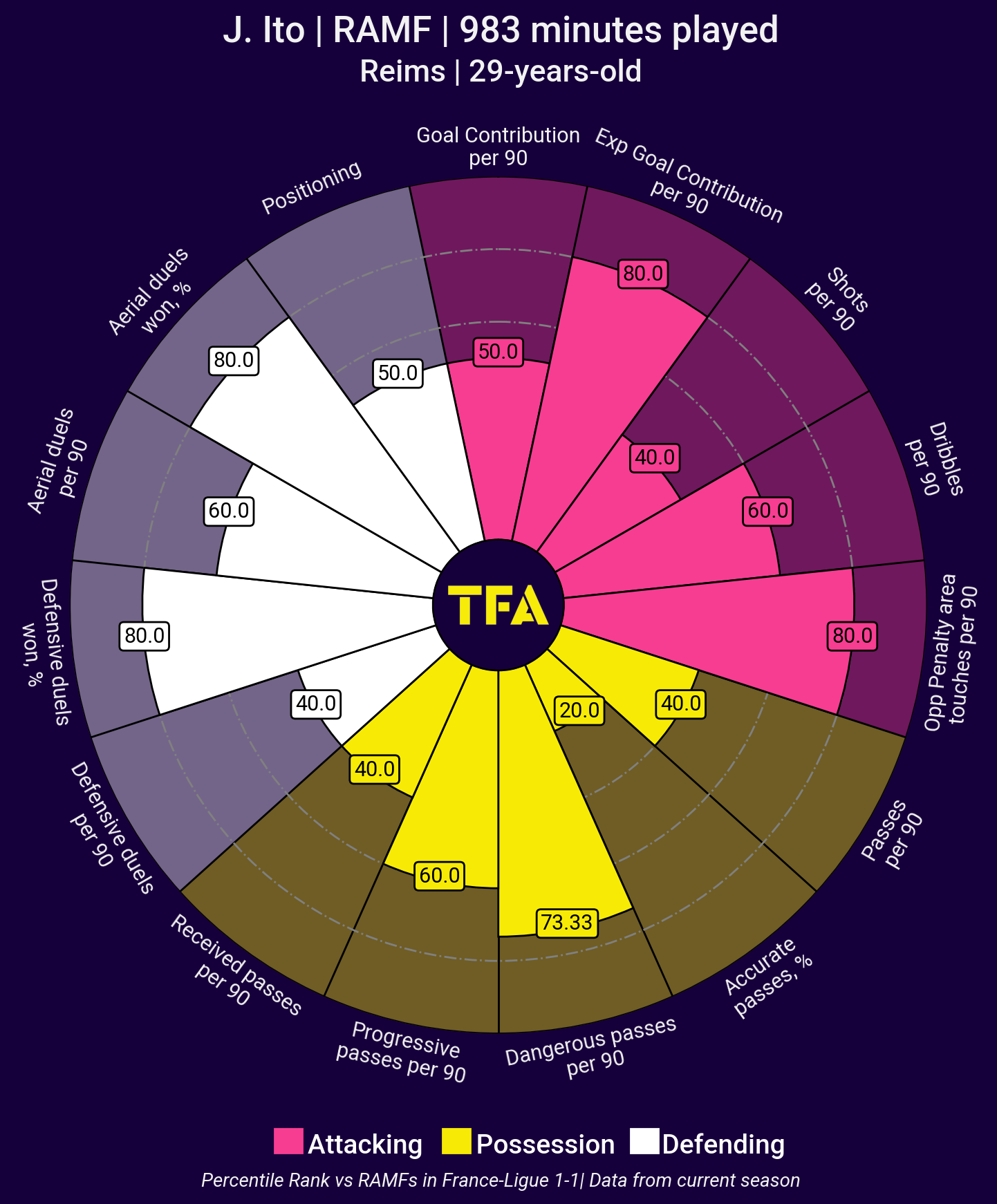 Junya Ito is a second striker for French Ligue 1 club Reims, and he joined them in July 2022. The above viz shows the percentile rank in comparison to the other right-attacking midfielders in Ligue 1. Junya Ito’s attacking stats have been crucial for Reims. He is ranked highly for goal contributions, shots, dribbles, and touches inside the opposition penalty area for Lorient. The player’s ability to defend has been extraordinary. He is ranked high for defensive duels won, and this has been a crucial advantage for the player and his team. 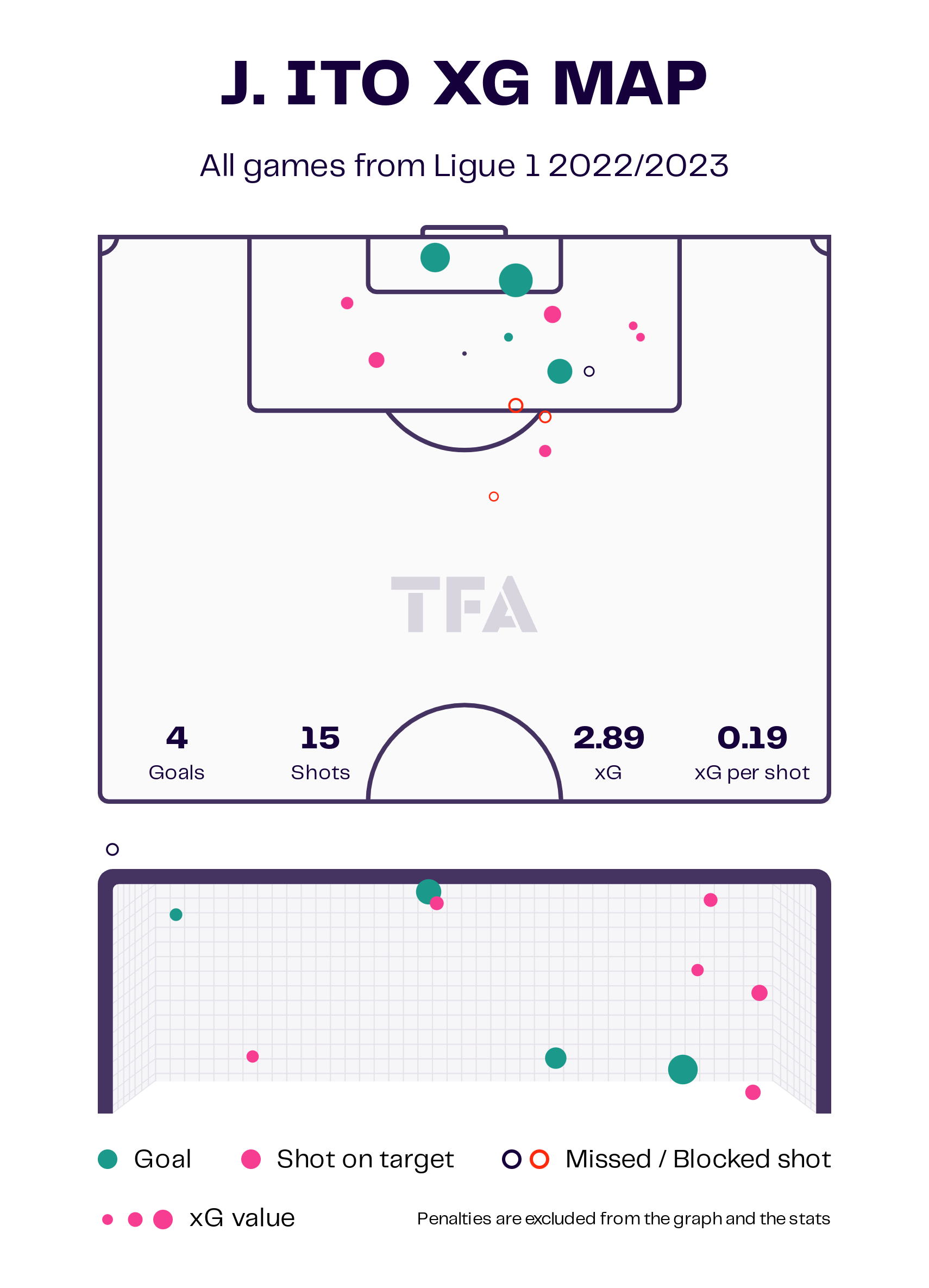 In the French Ligue 1 season 2022/23, Junya Ito has played 11 matches (plus one as a sub). They have ten shots on target from a total of 15 shots and have scored four goals (2.89 xG). Junya Ito averages 21 passes per game with a 69% completion rate and one assist. All of his goals have come from inside the box. Ito also attempts long-range shots occasionally, which are on target. 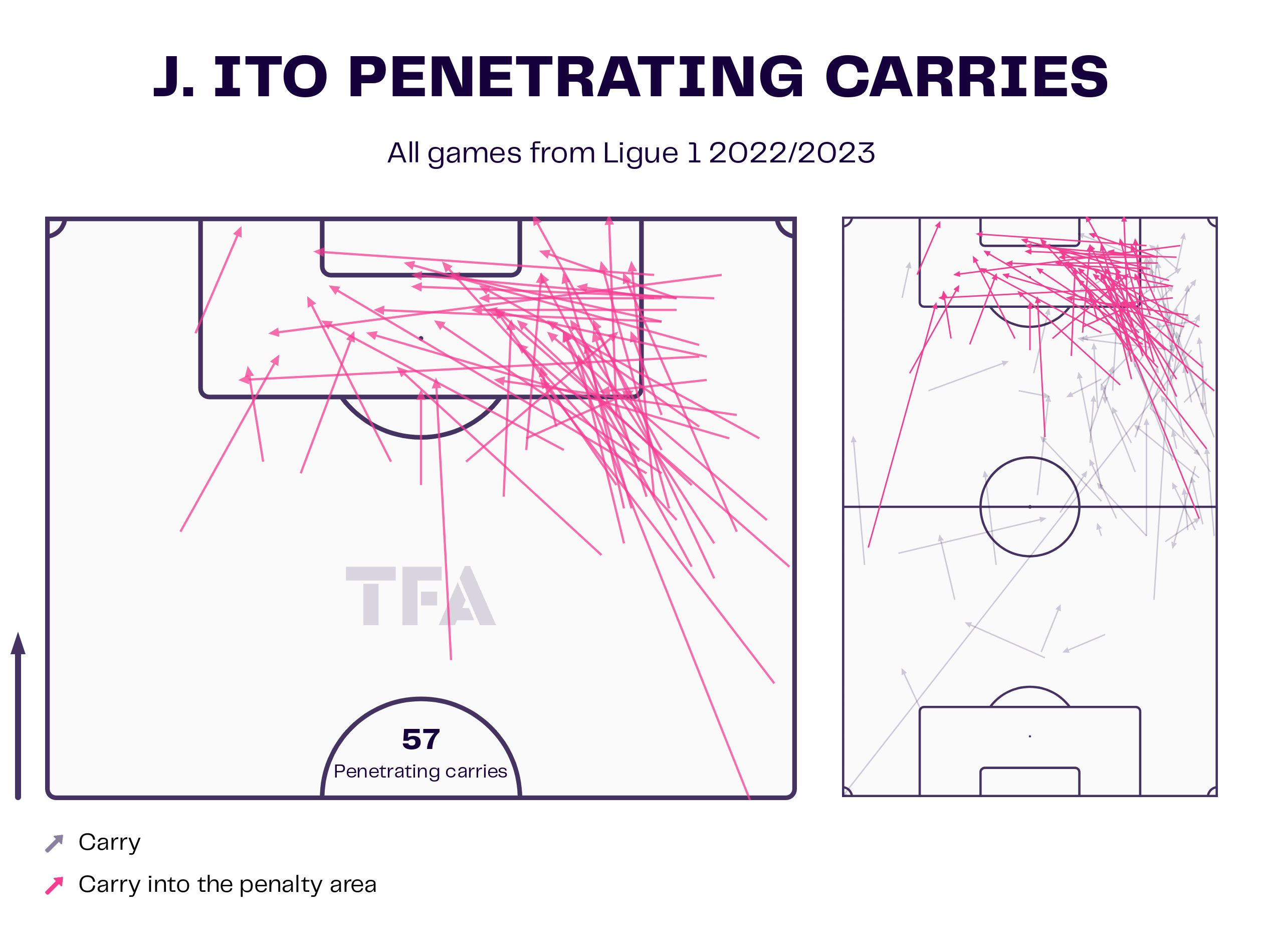 As a player who usually plays on the wing, Junya Ito prefers to play on the right flank of the pitch. The above viz shows the stats for penetrating carries and carries into the penalty area. Junya Ito has a total of 57 penetrating carries, which is impressive since it represents his ability to beat the defenders and fullbacks.

Ito from the wings 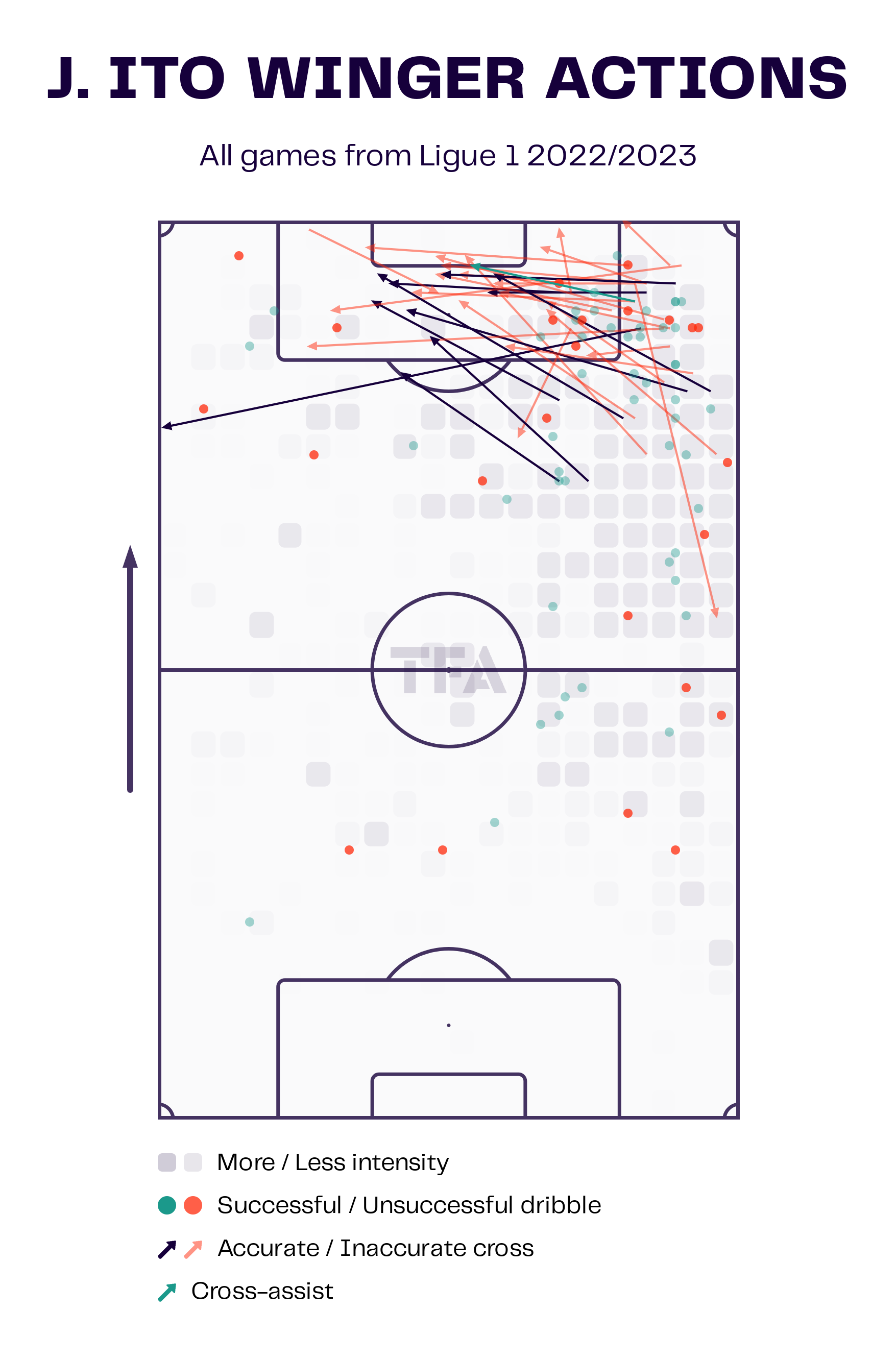 Ito is a textbook-wide man in many aspects since he possesses both technical skills and athleticism. He can stretch defences with his speed and is also content to run in from behind. Ito benefits from speed and core strength, which makes it challenging for defenders to push him off the ball. Ito is content to go past the defence. The above viz shows Junya Ito’s winger actions in Ligue 1 in 2022/23. It can be observed that most of his intensity is on the right side of the middle and final third. The number of successful dribbles on the right side of the final third is astounding. His ability to make accurate crosses is also demonstrated. 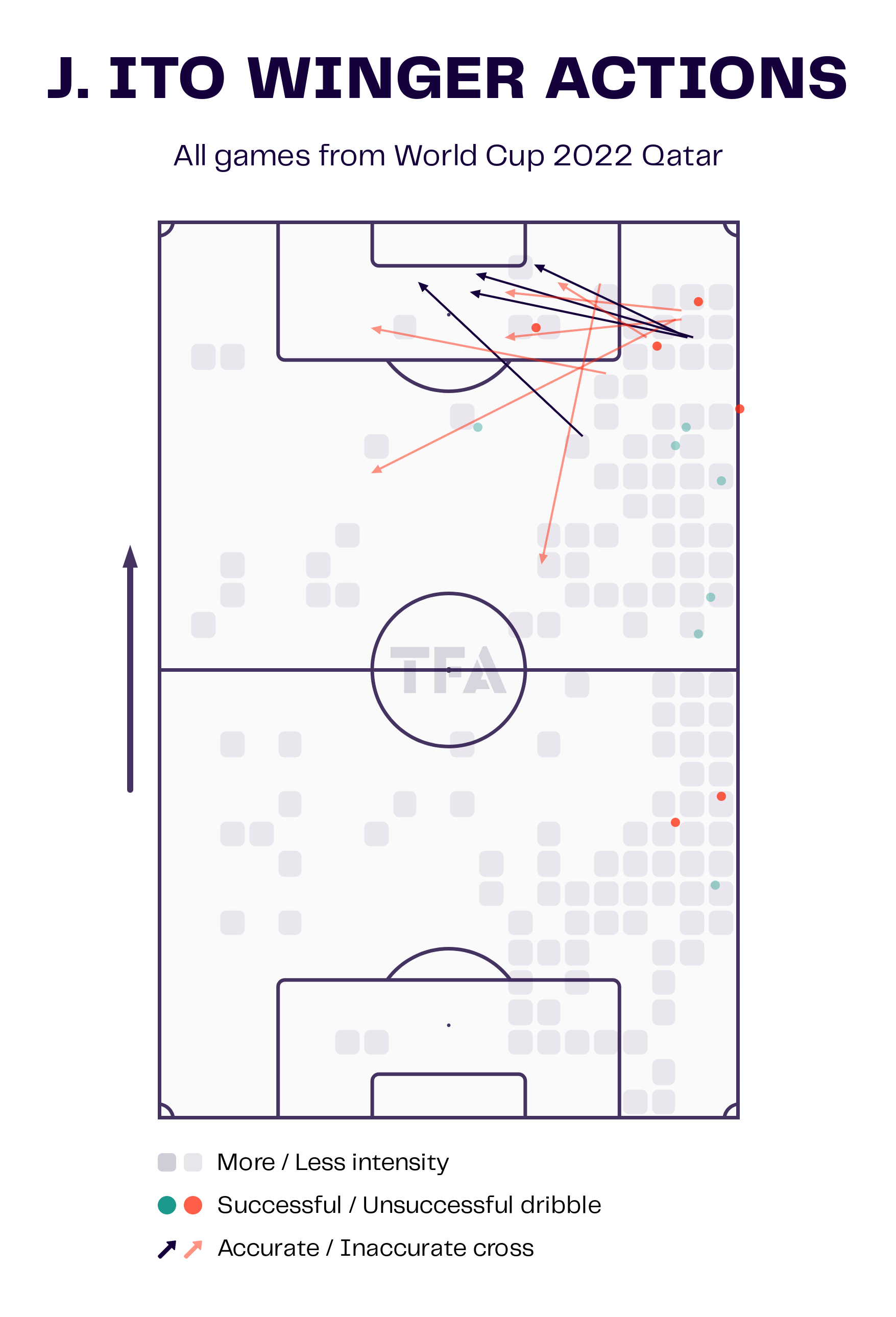 When it comes to finishing, Ito is very much a two-footed player. He usually plays on the right wing, but because he is left-footed, he can cut inside. Due to his two-footedness, Ito has more possibilities for beating his man when dribbling. The Japanese player is content to drive inside and possibly set up a shot for himself with his left foot or go outside and look for a cross with his right. The above viz is a representation of Junya Ito’s wing actions for Japan in the 2022 World Cup. The difference here is that Ito has made a greater contribution in terms of intensity in his half as well. Mainly, this is because Japan played against teams like Spain and Croatia, which are possession-dominating teams.

Ito’s move to one of the top European leagues may arguably have come too late, but at 29, he still has a couple of seasons remaining in his prime. His composure is often on display, as he usually makes a good decision when receiving the ball beyond the defence. Junya Ito is a player of immense quality and experience. His ability with the ball as well as his perfection on the pitch are helping Reims pick up some tough fights and emerge victorious.

André Villas-Boas finally producing what we expect from him

How can Neymar revive his career?