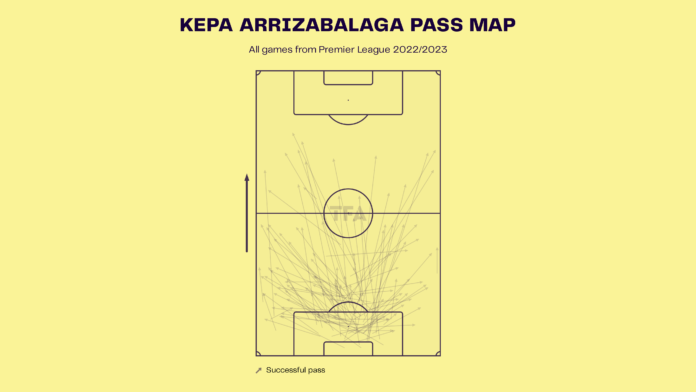 Kepa Arrizabalaga is a Spanish professional football goalkeeper who plays for the English Premier League club, Chelsea. In 2018, he was the subject of a record association football transfer when he moved to Chelsea in a transfer worth €80 million, a record fee for a goalkeeper. There, he won the UEFA Europa League, the UEFA Champions League, and the UEFA Super Cup. Since Mendy’s arrival in the goal, he has fallen down the pecking order. In the 2021 UEFA Super Cup against Villarreal, Arrizabalaga came on as a substitute in the 119th minute to replace first-choice goalkeeper Mendy. He saved two penalties, including the decisive attempt from Villarreal captain Raúl Albiol, in the shootout as Chelsea won their second Super Cup title. Now it remains to be seen where Kepa will find the playing time he is desperately in need of. Nice, which is currently ninth in the Ligue 1 table in 2022/23, is one of the emerging destinations. Below are some stats depicting Kepa’s overall performance for Chelsea in the English Premier League. 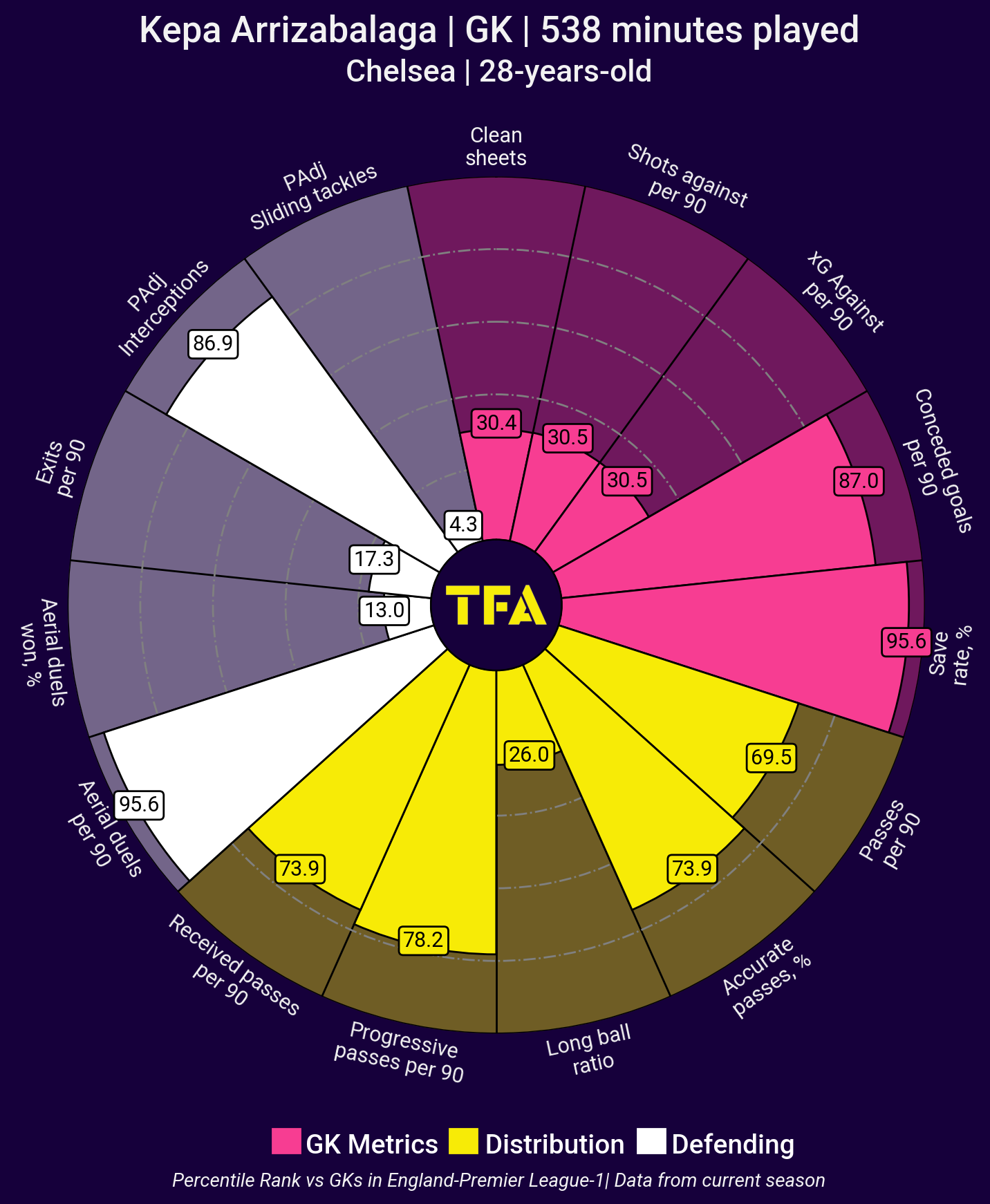 Movement and action in the defensive third 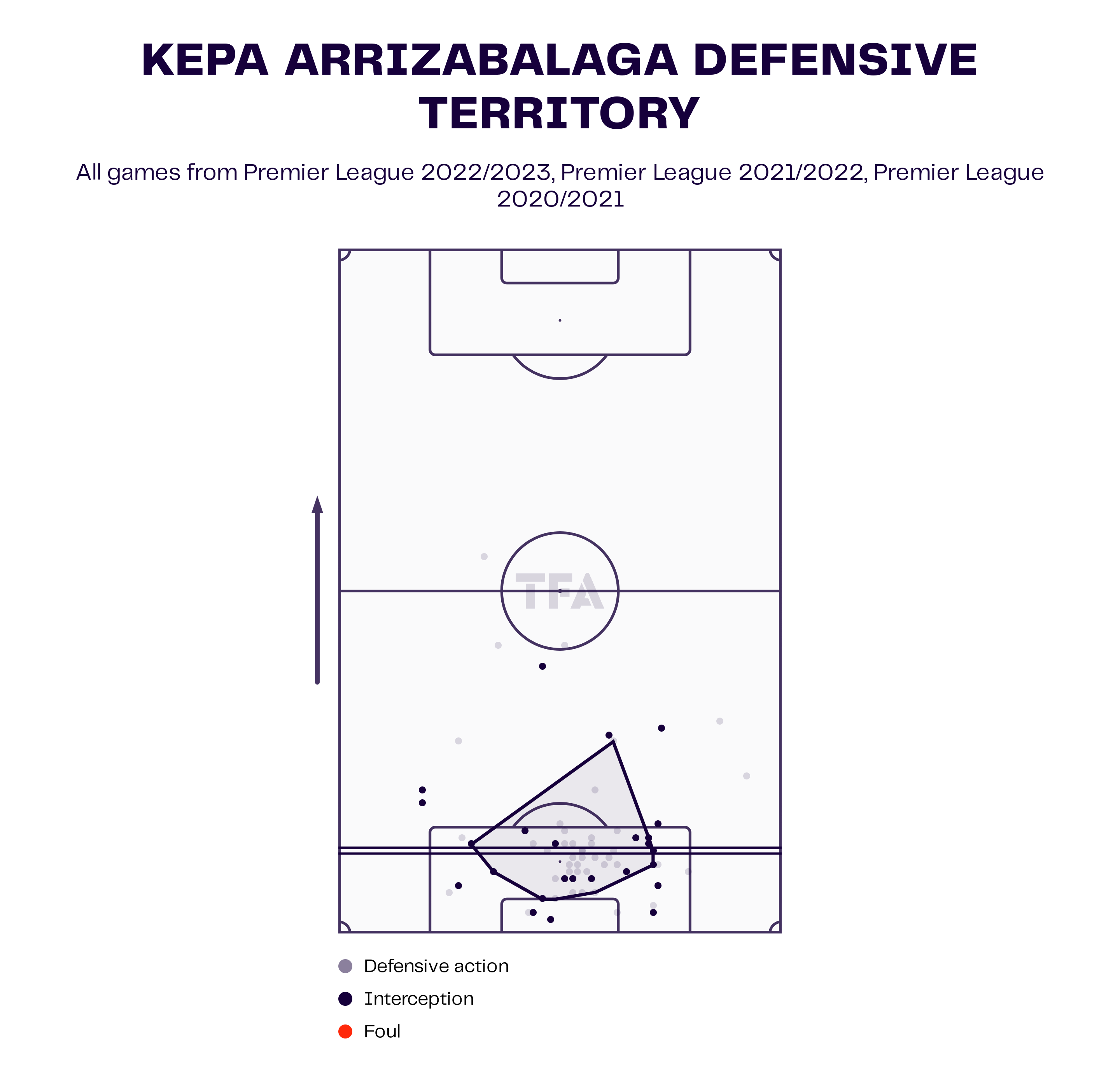 The above viz represents the area covered by Kepa in goal and during possession. As a goalkeeper, it is necessary to stay in the box and protect the goal. Kepa has a lot of interceptions in his win box and even a few in his six-yard box. He has not committed any silly fouls in that area. 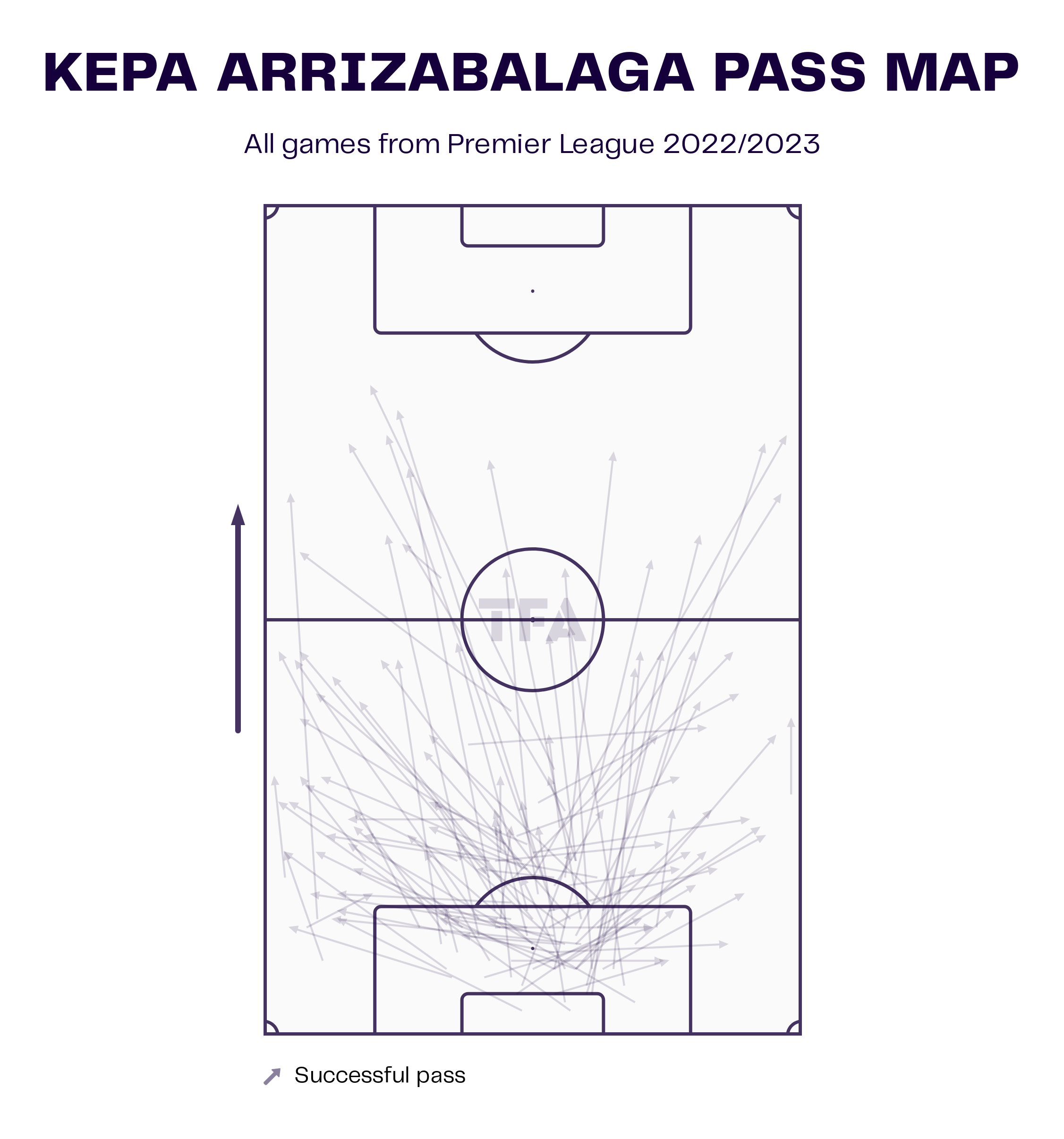 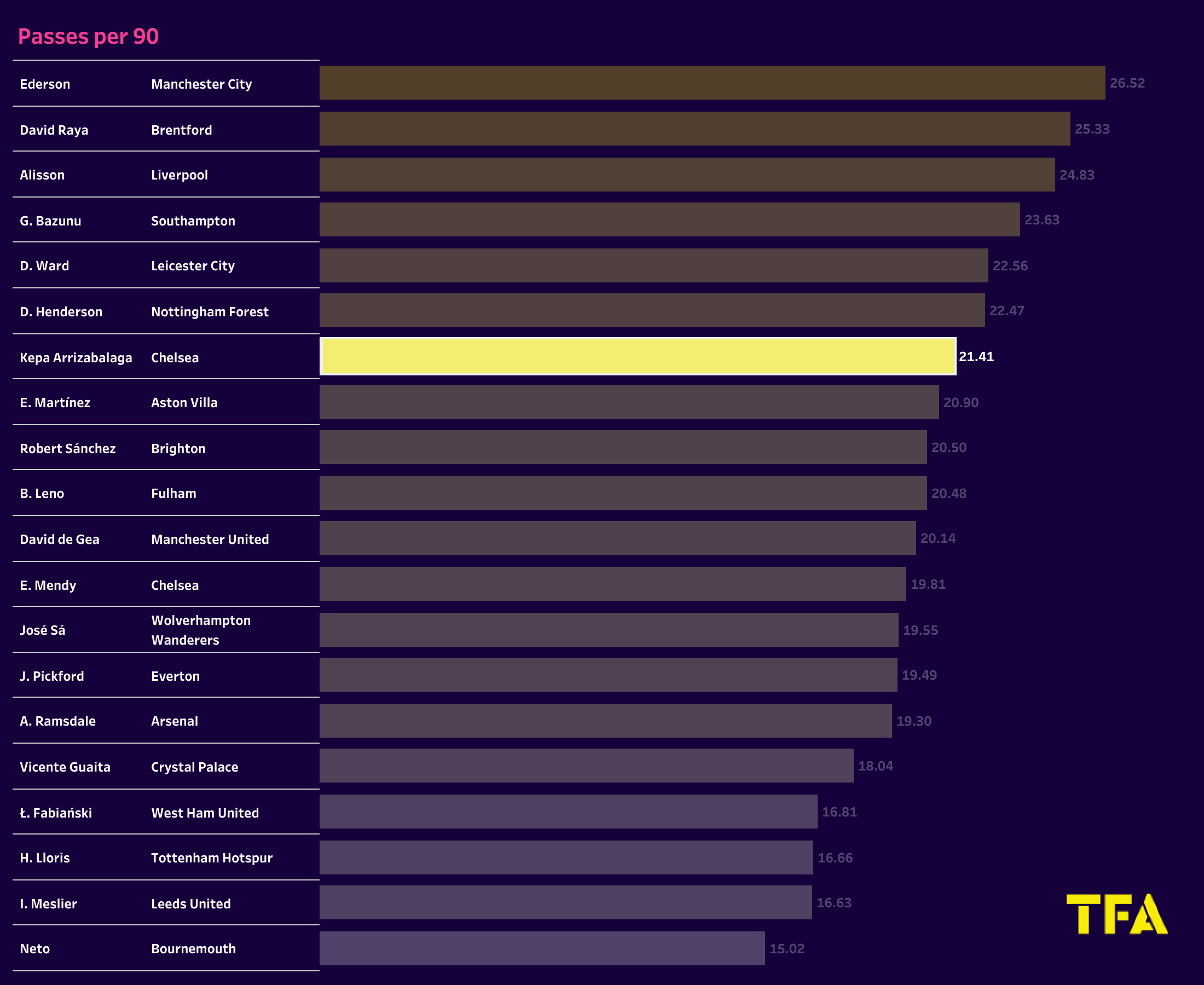 Chelsea is a team that likes to play from the back, so the game begins with the goalkeeper. Kepa usually plays the passes to his centre-backs, finds the free man near the full-backs, or tries a long pass. Kepa is also good at short distribution and has a passing accuracy of 83%.

Kepa is a goalkeeper who makes more passes per 90 minutes as compared to other goalkeepers in the Premier League. He ranks seventh in terms of the total number of passes per 90. Passing is an important attribute for a goalkeeper because one wrong pass can result in a gift to the opponent. Especially in teams that like to play from behind or use the keeper as much as possible to play the ball back in times of pressure.

Weak in the air 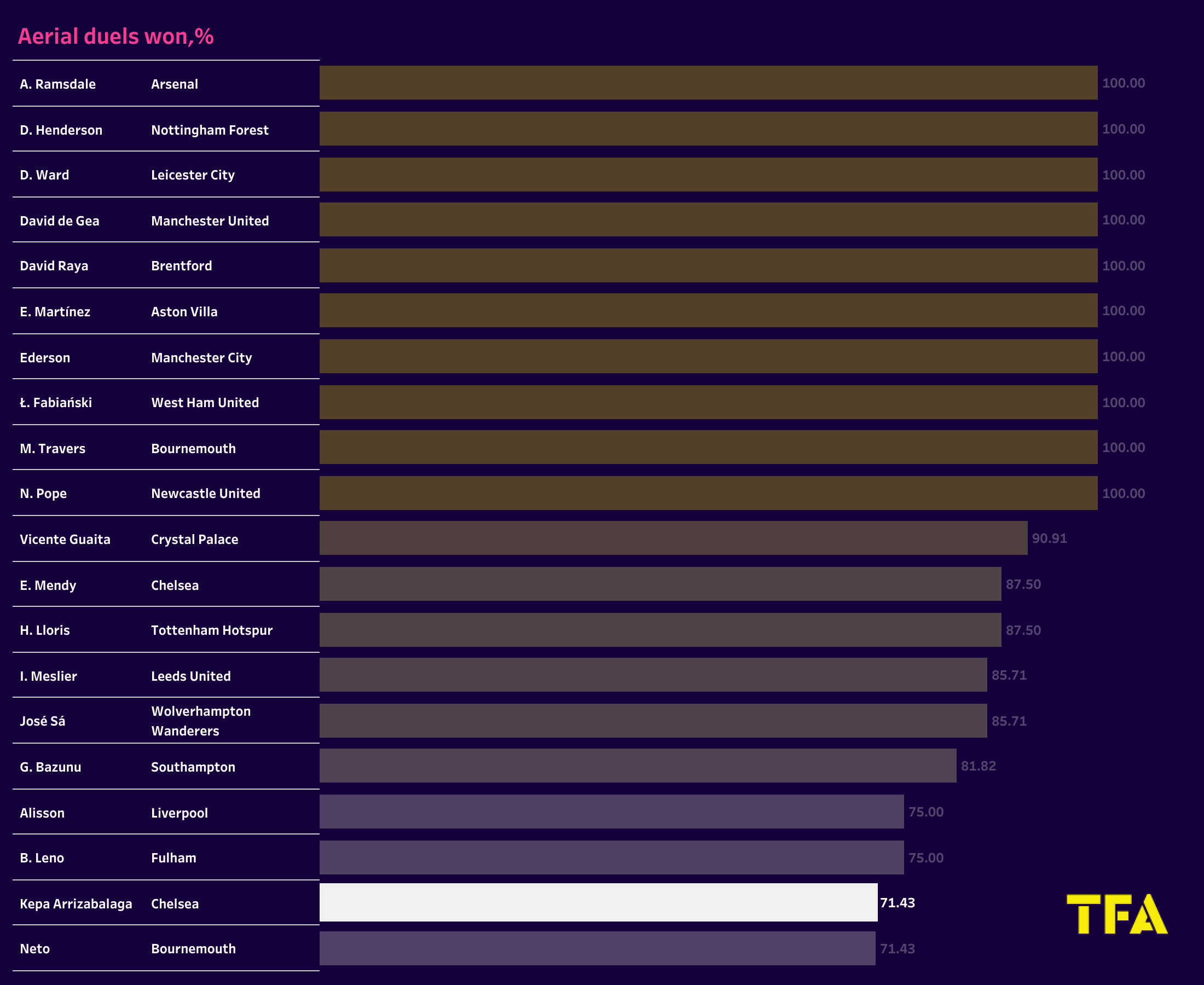 Kepa is not ranked among the best when it comes to aerial duels. His percentage of won aerial duels is low compared to other Premier League goalkeepers. The above player benchmarking shows the percentage of aerial duels won by all Premier League goalkeepers. It is seen that he faces some trouble when he tries to claim the high balls. Kepa sometimes gets into awkward positions and loses the ball. He has difficulty having the necessary reach, mainly due to his height disadvantage. 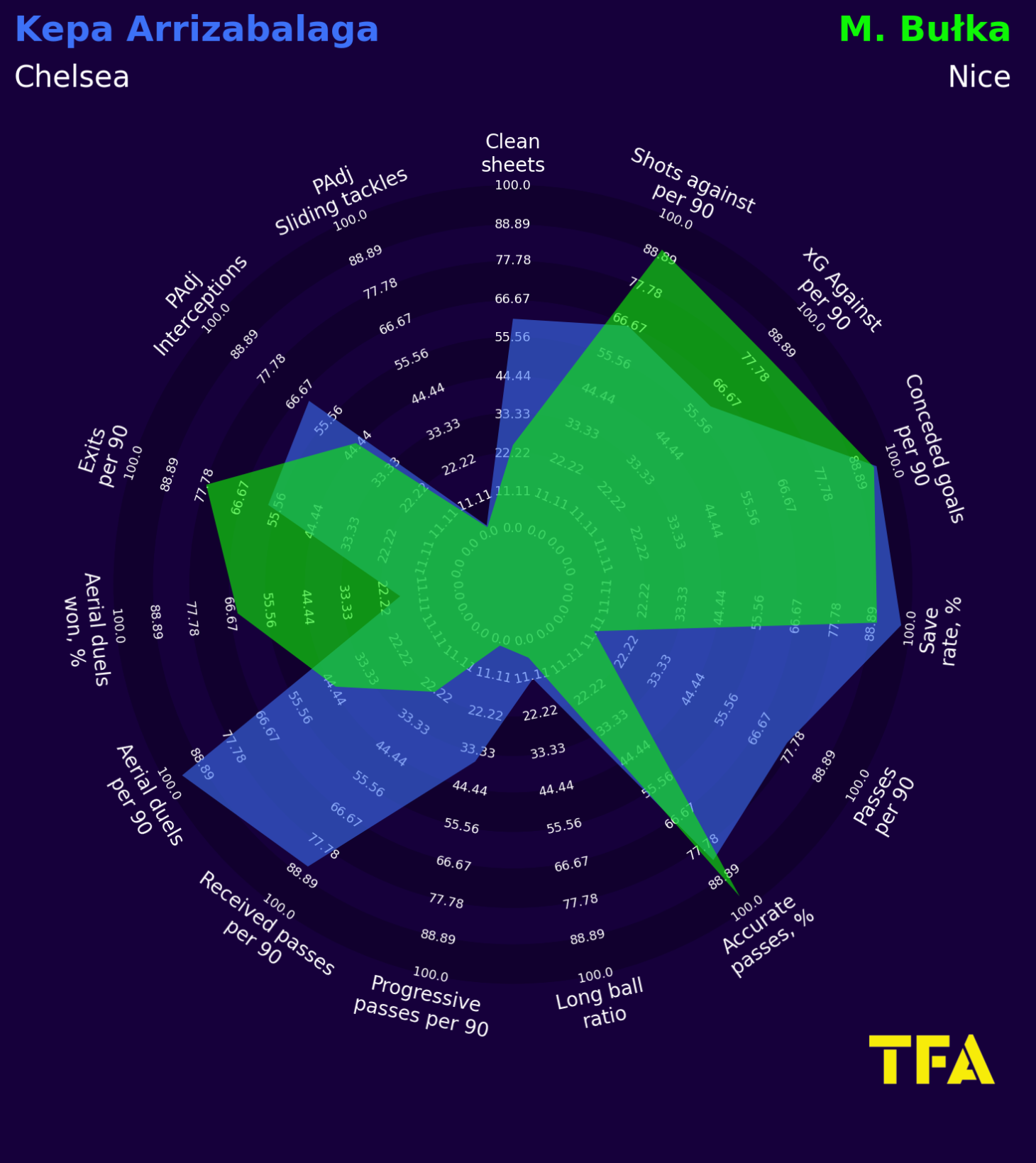 The above visualisation shows the comparison of radars between Kepa Arrizabalaga and Marcin Bulka, who is the second-choice goalkeeper for Nice. Kepa Arrizabalaga is a fantastic goalkeeper and has displayed impressive performances over the years. There are areas where Kepa performs better than Bulka. We can observe from the visual that Kepa surpasses Bulka when it comes to passing accuracy and positioning, both of which are very important for goalkeepers. Kepa isn’t the best in aerial combat, but he has a higher save rate percentage.In terms of goals conceded, both keepers have similar numbers.

Kepa Arrizabalaga was a sensation and star in Chelsea colors, but he faded in popularity due to injuries and poor performances. This has resulted in the most expensive goalkeeper signings of all time being somewhat of a flop. Kepa has the necessary abilities that a goalkeeper needs, and hopefully, with lots of confidence, he can come back soon. The drop in form has led to a situation where he may have to exit the club sooner or later and look for newer options in search of playing time.

Ligue 1 could be hit hard financially as TV rights deal...

Under the microscope: Why Troyes are having a tough time in...

The emerging threat to PSG’S crown