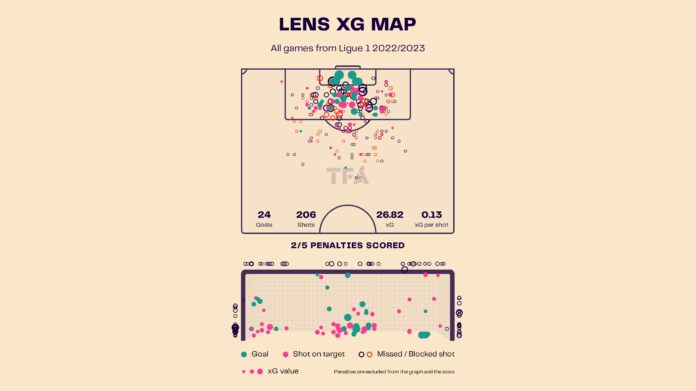 After a record start to the Ligue 1 2022-2023 season, RC Lens are currently in second place, thanks to their home form. The largest home-away point differential of any team in the Premier tier of French football belongs to Franck Haise’s team. Lens came from behind to beat Clermont 2-1 and consolidate their second place in Ligue 1 by extending their perfect run at home. The result put Lens, who have won all their home games this season, on 36 points from 15 games. Out of these 15 games, they have won 11, drawn three, and lost just one match in the Ligue 1 2022-2023 season. We now look at the various stats that can help us better understand Lens’ impressive performance. 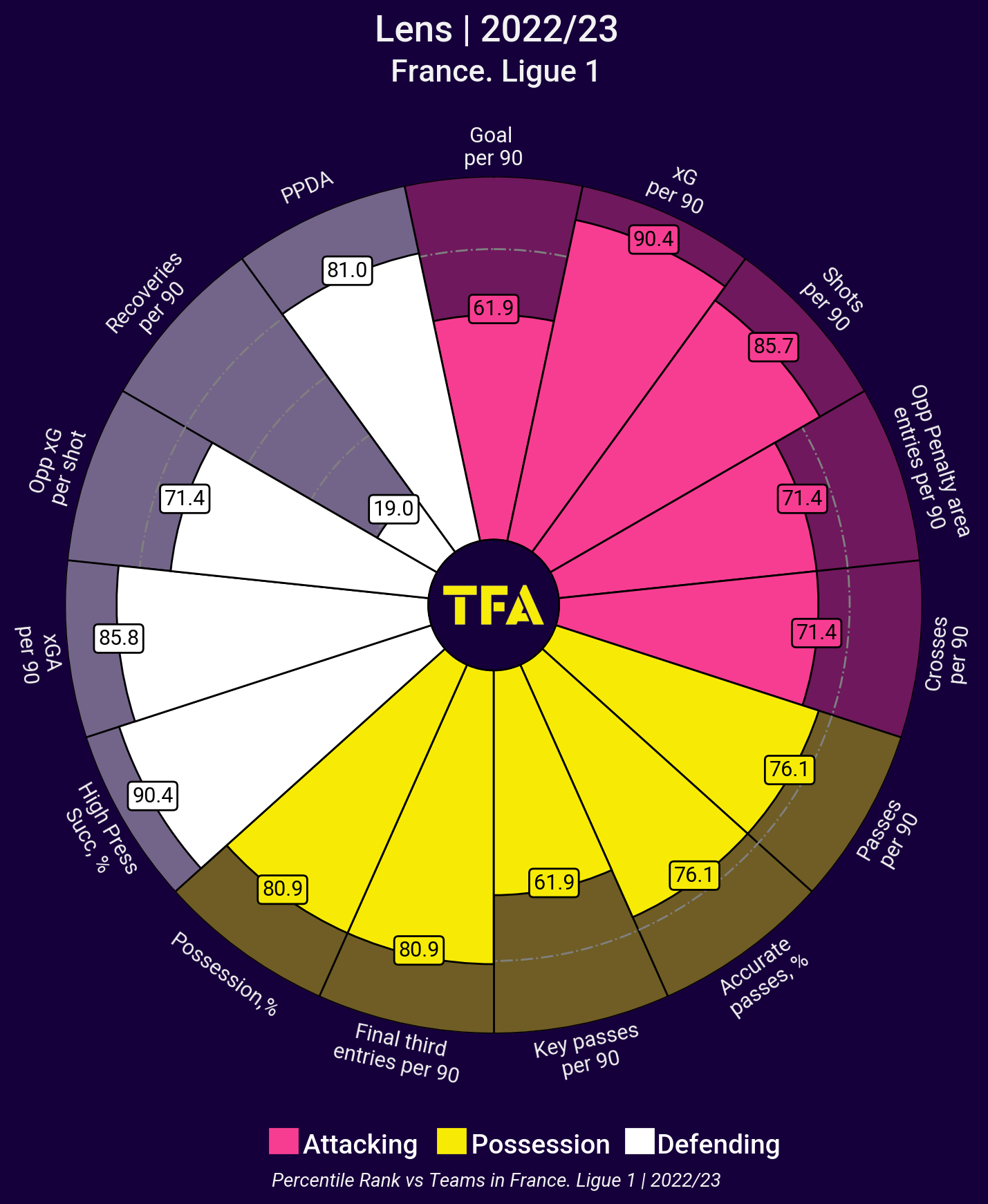 RC Lens are currently on a five-match winning streak. Franck Haise’s men have managed to score 26 goals in 15 matches and conceded just ten. The above viz shows the percentile rank of the team in attacking, defensive, and possession stats compared to other teams in Ligue 1. We can clearly observe that Haise’s men are ranked at the top in the attacking stats, especially for expected goals per 90 and shots per 90. Lens have a high xG rate of 1.79 per match. They are also ranked highly in defensive displays, which has led to a successful start. Another area where they have excelled is in a high-pressure succession rate. In terms of possession, they have maintained an overall high possession rate. Another factor is the number of entries in the final third per 90. The overall performances have led to early-season glory. 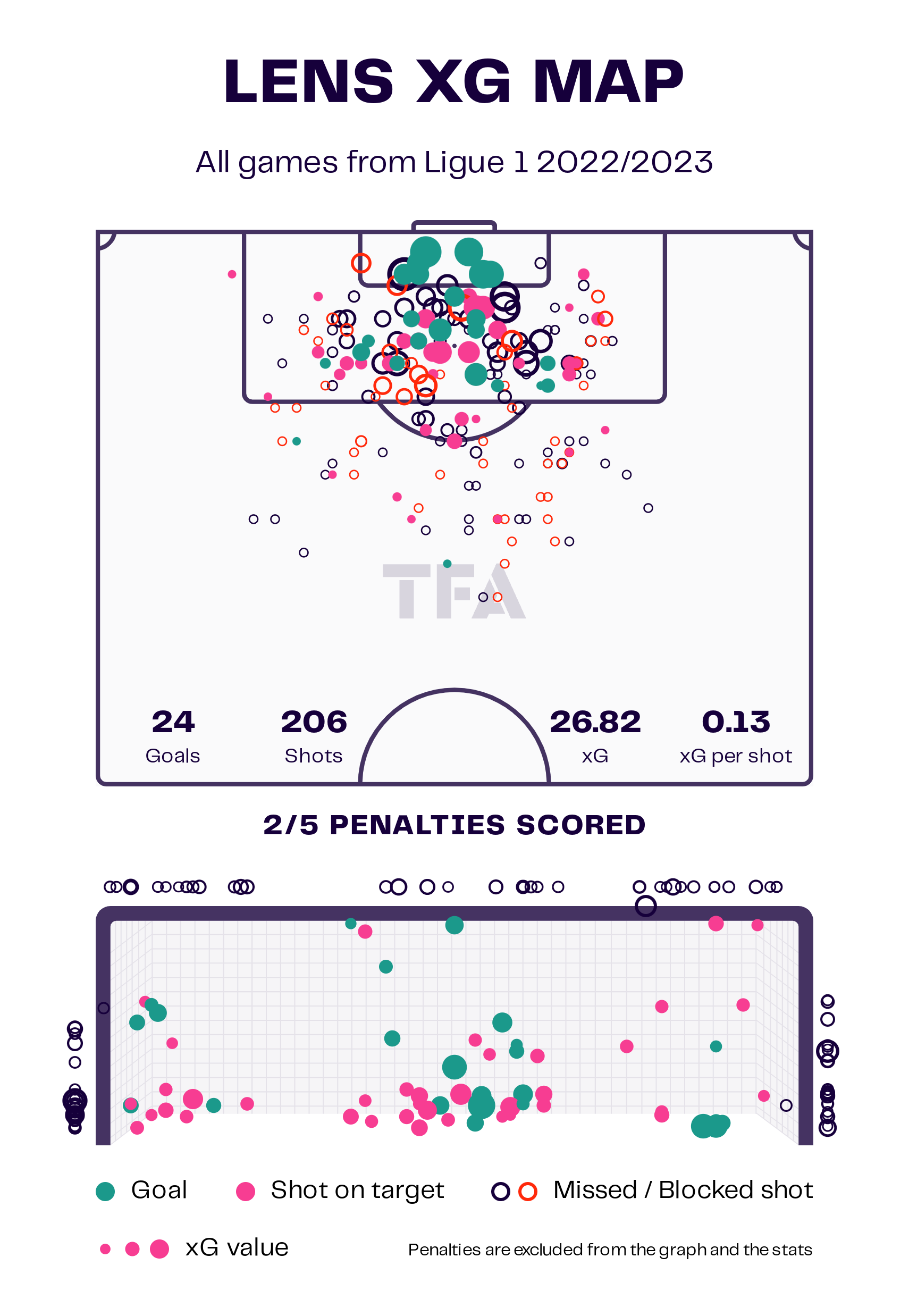 Lens have scored 26 goals with an average of 1.73 goals per match. They create 32.6 positional attacks and 1.53 counterattacks on average per match. The above viz shows the shot map of the team in the current season. It can be observed that Haise’s men have scored most of their goals from just around the 6-yard box. The xG is high because they have managed to take shots from dangerous areas inside the penalty box. 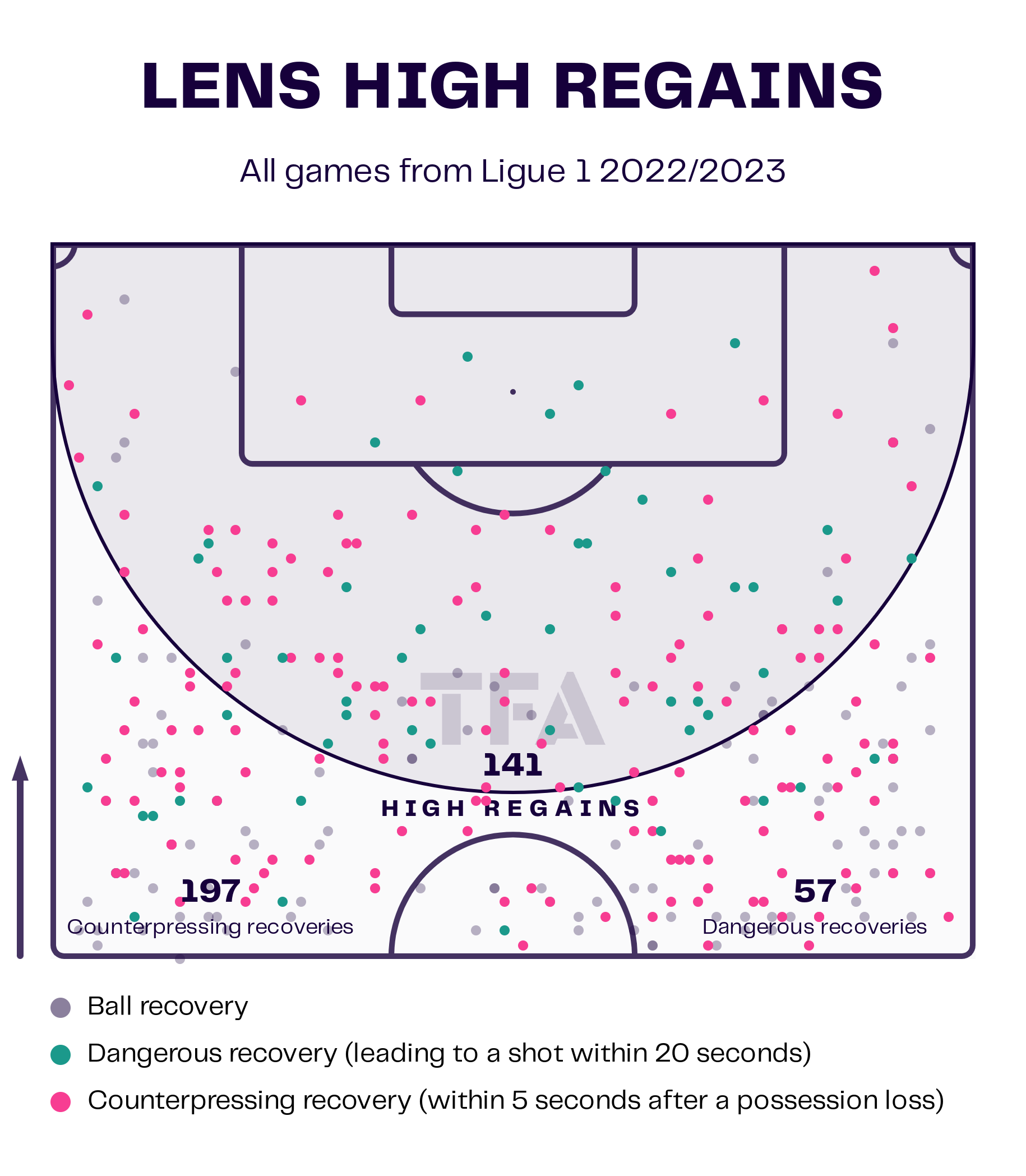 Another reason why they have excelled in the attacking department is due to their high-pressing success. This high pressing has allowed them to make 141 high regains. A total of 57 dangerous recoveries have been made by the team, and most of these recoveries have been made in the attacking third. Lens have also made a few dangerous recoveries inside the opposition penalty box, and that has led to a shot on five occasions. Additionally, Lens have made a total of 197 counter-pressing recoveries, which have contributed to their successful season so far. 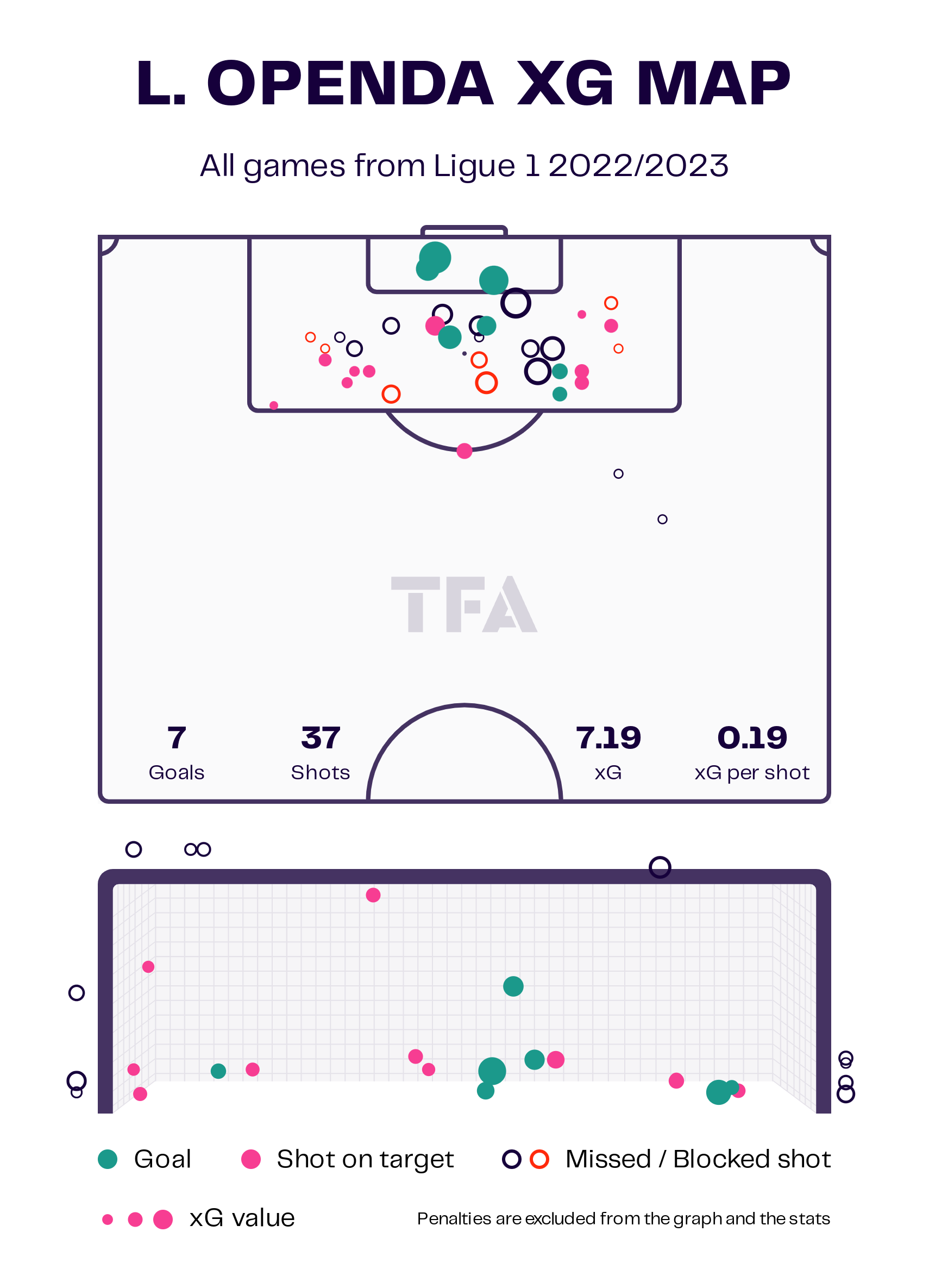 Luis Openda has found his touch in Ligue 1 this season. The winger has managed to score seven goals for his side. The Belgian’s main position is centre forward, but he also plays as a left winger or right winger. He managed to score all three goals in a 3-0 victory against Toulouse after being subbed on in the 60th minute. He likes to get into dangerous positions inside the box to receive the ball and manages to score goals. The Belgian has attempted 37 shots and has an xG of 7.19. All of his goals have come from inside the box. This shows his positional awareness and ability to enter dangerous areas. 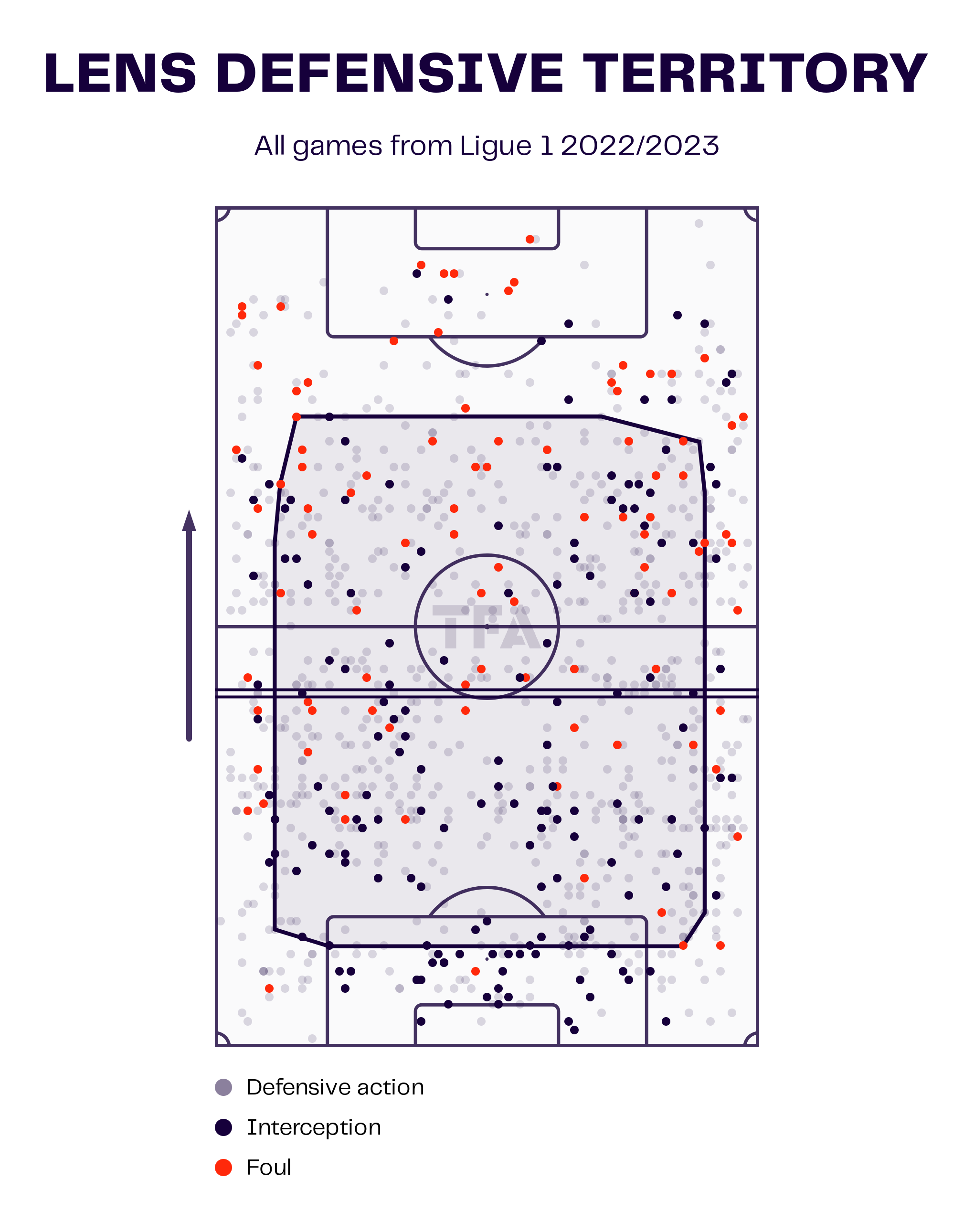 Franck Haise’s men have surprised many with the displays they are giving on the pitch. Their defence has been solid and has kept a clean sheet against the likes of Lyon and Marseille. The above viz depicts the team’s defensive territory during the 2022/23 Ligue 1 season. Lens gives up 14.4 fouls per match. Another thing that can be observed is that Lens have committed one foul in their defensive areas. They have made many interceptions in and around their box. 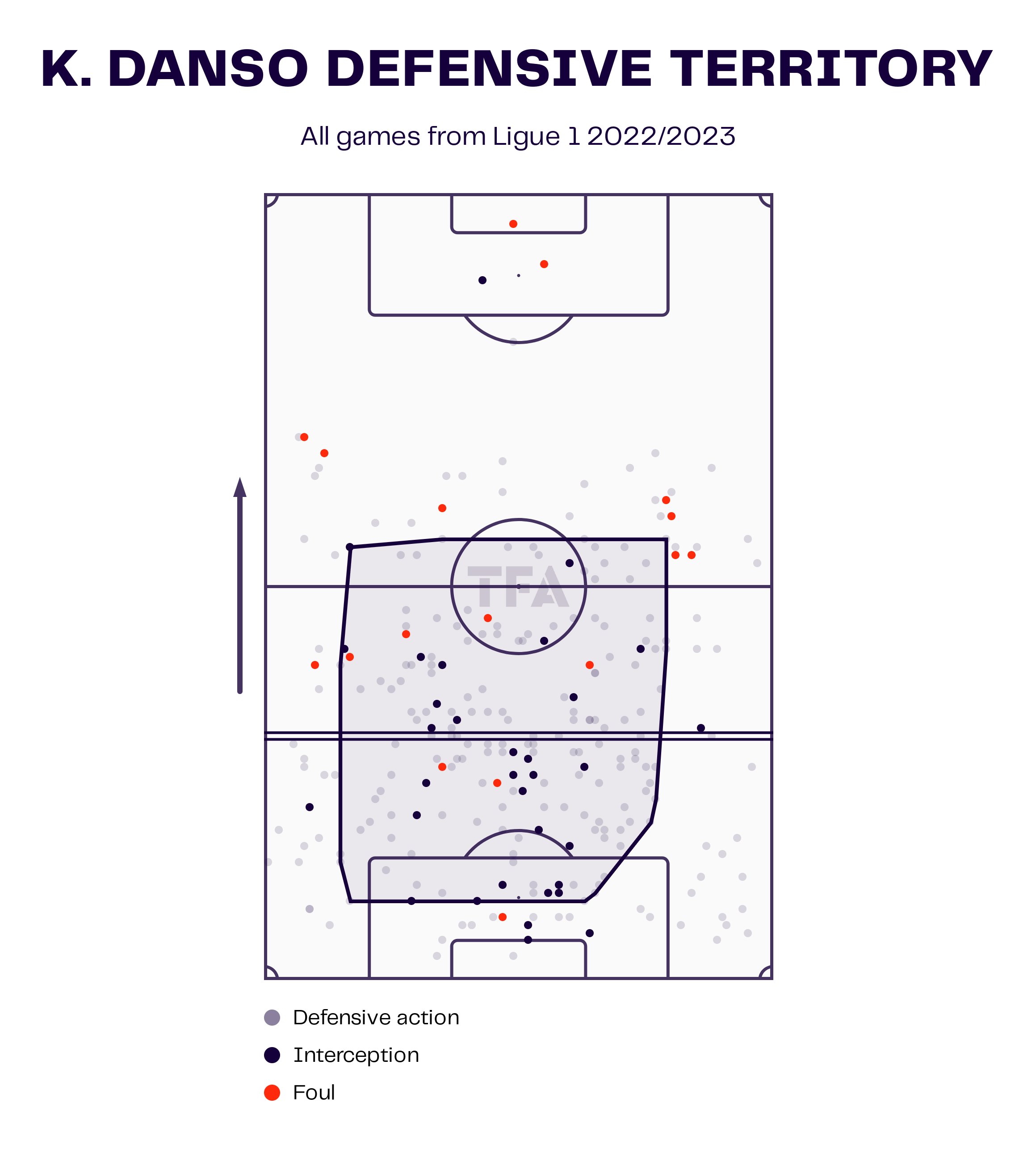 Currently, the best defender in Lens is Kevin Danso, with a total of 98 pass interceptions. With this top performance, he ranks number 8 of all top 5 European league defensive players and number 136 in the overall ranking of the French Ligue 1. He plays an important role in providing a strong backline for the Lens team. 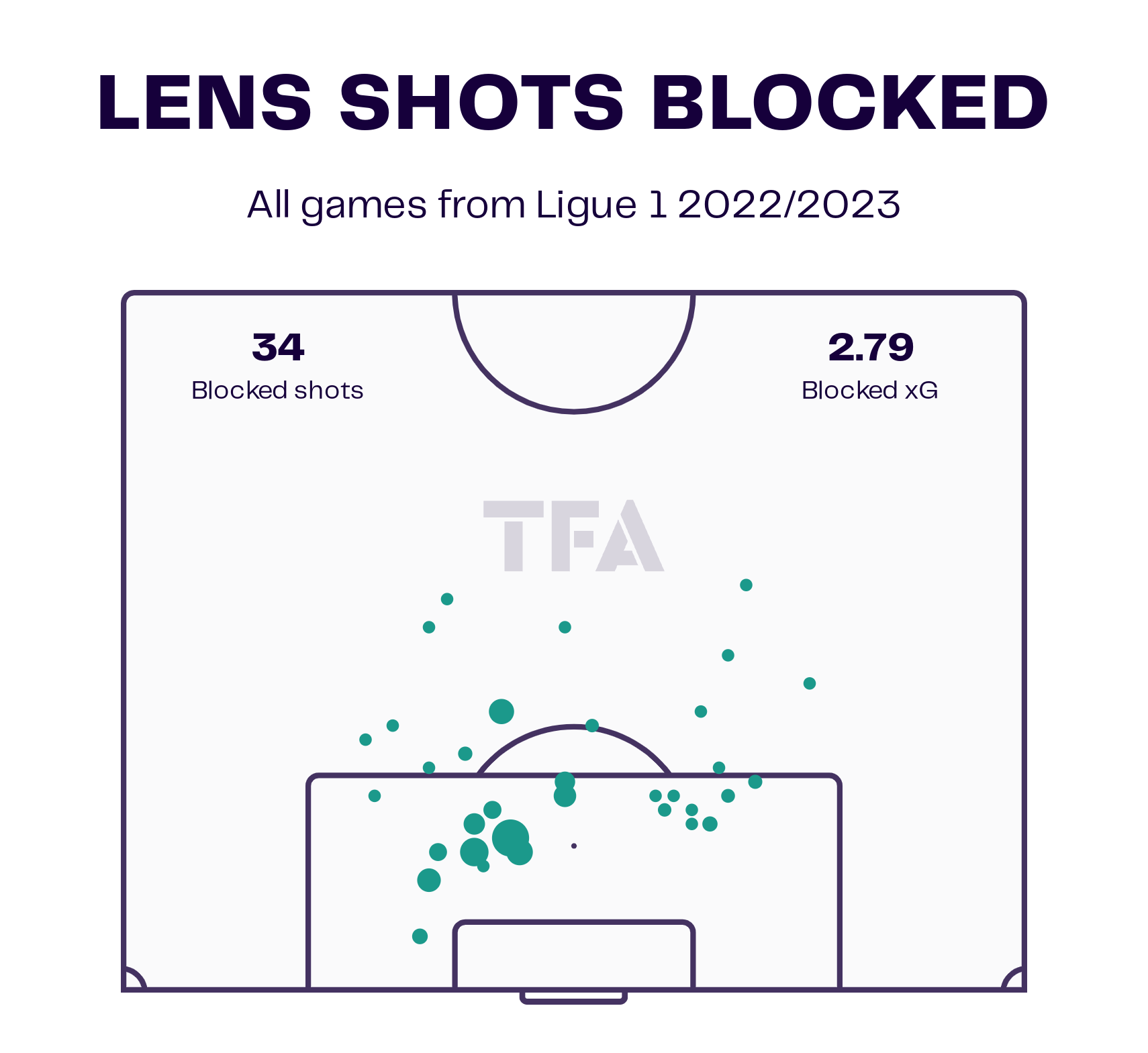 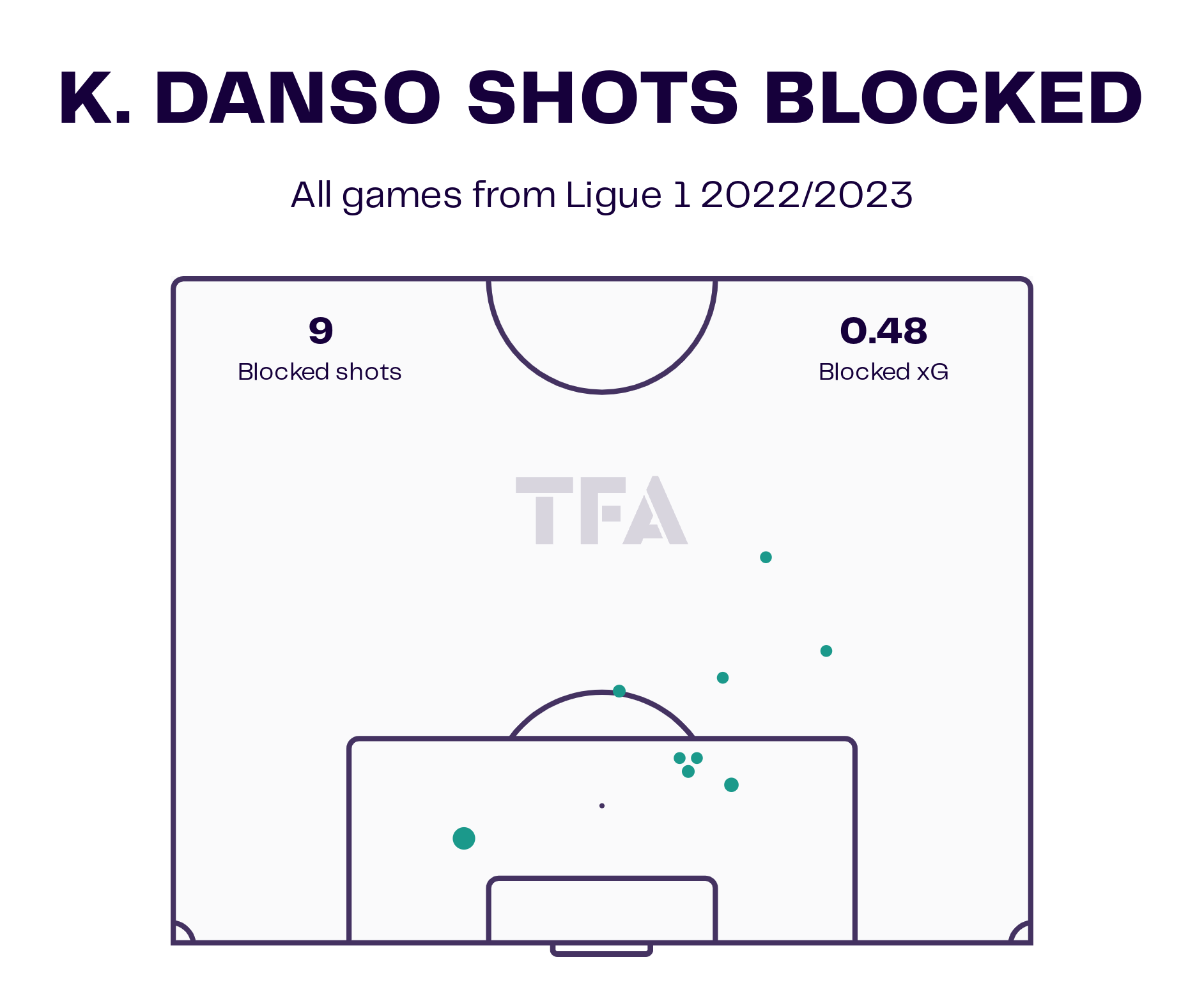 Lens defenders have put their bodies on the line and blocked 34 shots. These blocks have been crucial and were made in and around their own penalty box. One of the players who has been consistent at the back is their Austrian Center Back Kevin Danso. He has made nine crucial blocks, both in and around the box. He has also made a total of 98 pass interceptions. This shows the commitment shown by the players and their dedication to carrying Lens to the top, preferably to European glory.

Franck Haise’s men have conceded only three goals in the last ten games. The defence has played a crucial part in their success. They have won crucial duels and stopped the opposition from scoring goals. The attack is led by Florian Sotoca and Luis Openda. Other players have also contributed toward scoring goals. These contributions have led to success in the league. Franck Haise will hope that these players stay at the top of their game after the World Cup and finish in the top two.

Transfer Analysis: What could the former Manchester City graduate add to...

Bekhti is in full praise for his former youngster