As the new Ligue 1 campaign starts, many are already hoping to see PSG finally get dethroned by the end of the season. However, Les Parisiens managed to win comfortably against Nimes with a convincing scoreline of 3-0 in their opening match, making those that aren’t exactly fans of the oil-rich club doubting as to whether or not they’ll be seeing new champions this season.

However, Thiago Silva and co. faced Rennes again in their second fixture, a stronger team overall who managed to defeat PSG three times in their last six meetings. The last two meetings particularly, have been quite tight with PSG and Rennes each got a vital win in the final of Trophee des Champions and Coupe de France respectively.

The match on Sunday was another proof that PSG should be more cautious this season as their competitors have now vastly improved not just in terms of player quality both as a team and as an individual, but also in the tactical side of the game. PSG may have players some levels above their opposition in terms of quality, but they were easily overcome via smart strategy and tactics employed by Rennes.

We’ll be taking a closer look at both team’s tactics in this tactical analysis. 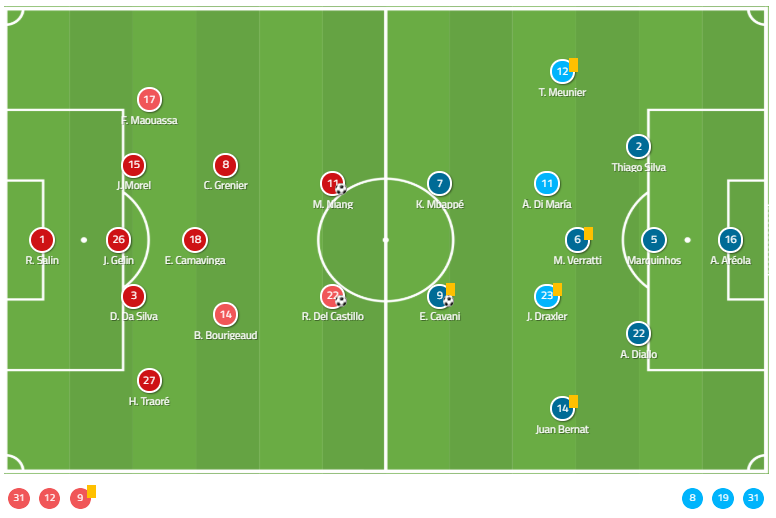 Stephan deployed his team once again in a 5-3-2 shape, however, there doesn’t seem to be much change in terms of tactics despite his team having to face a much more offensively aggressive PSG, having previously faced a rather defensive Montpellier. Not a lot of change in terms of personnel as well for Rennes. Benjamin Bourigeaud started the game ahead of James Lea-Siliki which shows Stephan’s desire to have a more defensively active midfielder in his side in this game. Romain Del Castillo replaced Flavien Tait who received a direct red card in his debut with Rennes the last time out.

Tuchel, on the other hand, opted for a three-man defence, taking the shape of 3-5-2 despite previously playing in a 4-3-3 system in their 3-0 win in the opening game against Nimes. Only two players were relegated to the bench. Thomas Meunier started ahead of Thilo Kehrer in this match, playing as the right wing-back. Maruqinhos moved deeper into the centre-back position having played as a defensive midfielder in the previous match. Angel Di Maria also started the game, replacing Pablo Sarabia. The Argentinian played as a right central midfielder in this game.

To read the rest of this tactical analysis, go here