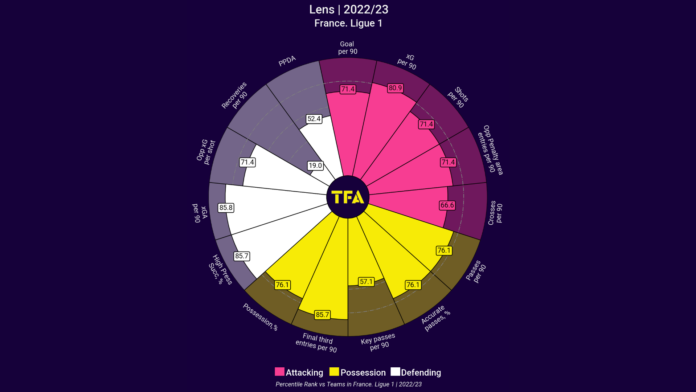 Lens welcomes Strasbourg to the Stade Bollaert-Delelis on matchday 18, After a record start to the Ligue 1 2022-2023 season, RC Lens are currently in second place, thanks to their home form. The largest home-away point differential of any team in the Premier tier of French football belongs to Franck Haise’s team. Lens recently beat the league leaders three goals to one at home and consolidated their second place in Ligue 1 by extending their perfect run at home. The result put Lens, who have won all their home games this season, on 40 points from 17 games. They have scored 29 goals and conceded only 11 this season.

Strasbourg have won just one of their Ligue 1 games so far this season. Currently, Strasbourg are living very dangerously indeed and lost three goals to two to Troyes in their last away outing. They are in 19th place with only 11 points after having played 17 matches. Strasbourg have scored 20 goals and conceded 31.

Below, we will look at both teams’ stats from the current season and provide a match preview for PSG vs. Strasbourg. 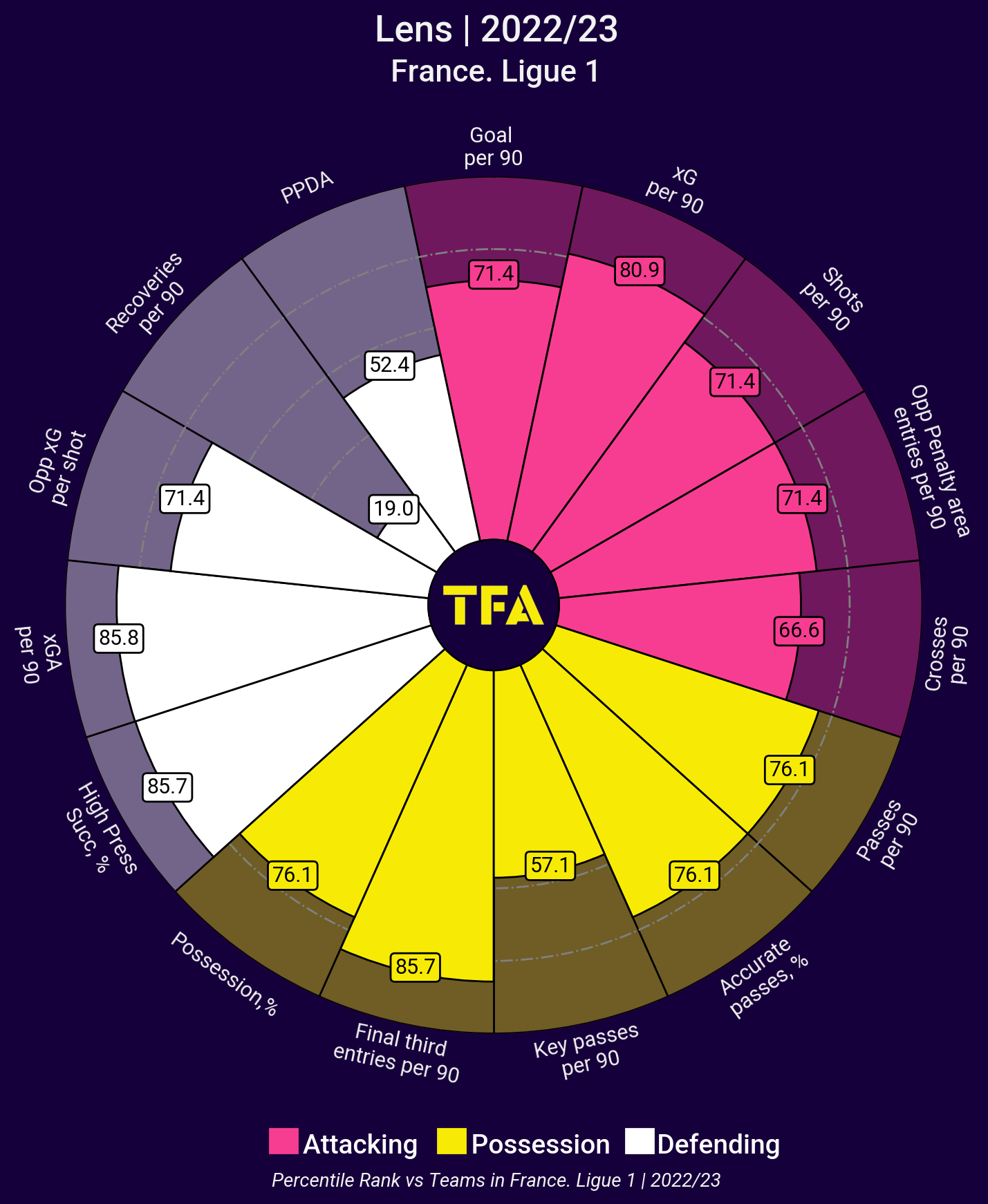 The above viz shows the percentile rank of Lens in attacking, defensive, and possession stats compared to other teams in Ligue 1. We can clearly observe that Haise’s men are ranked at the top in the attacking stats, especially for expected goals per 90 and shots per 90. The team makes 76.47 recoveries per 90 minutes. 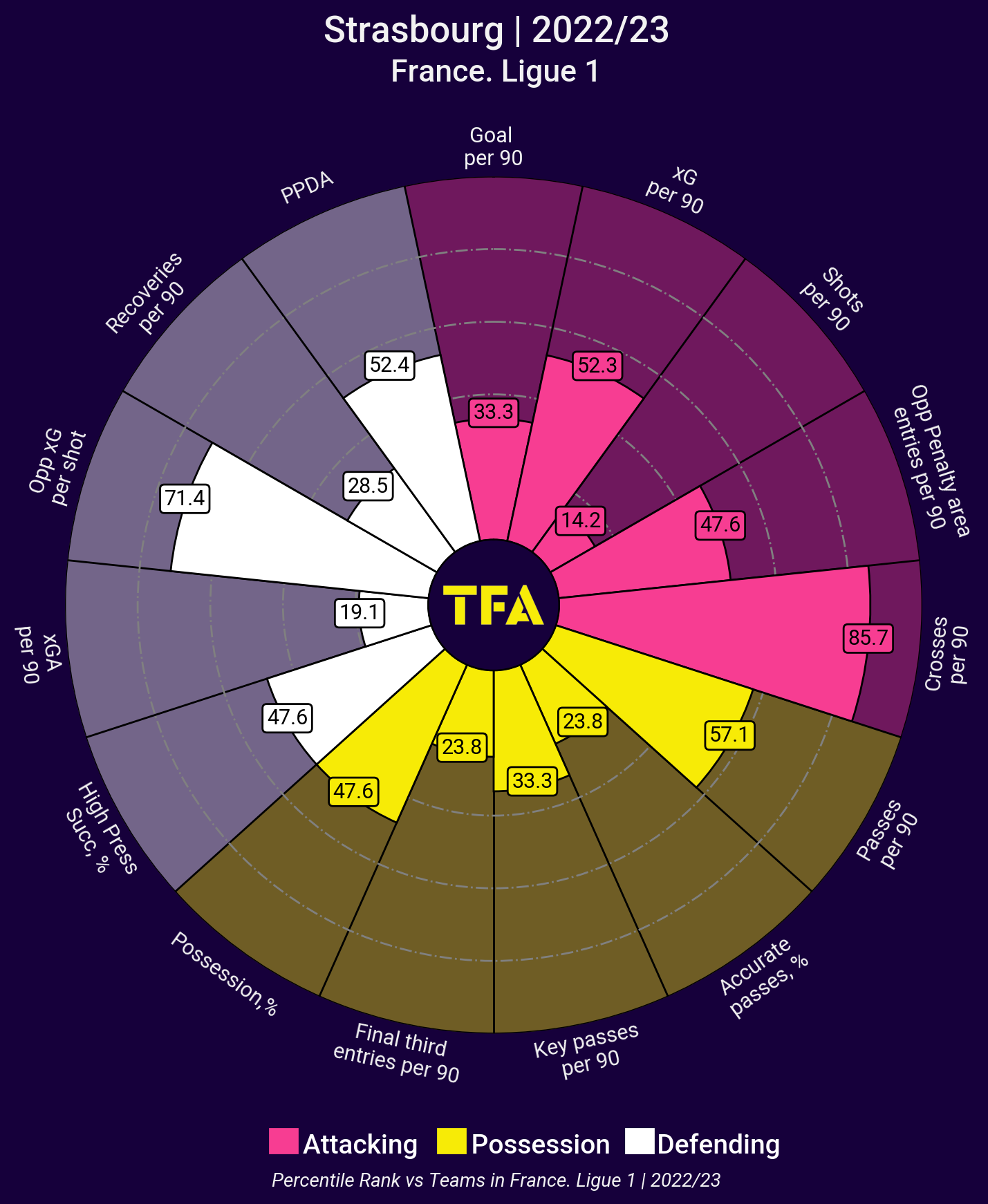 Strasbourg are performing poorly in terms of attacking and ranks among the bottom percentile ranks for most of the departments. The team heavily depends on crosses, which is one area where they are among the top 85.7 percentile rank in Ligue 1. Strasbourg makes a total of 86.41 recoveries on average. 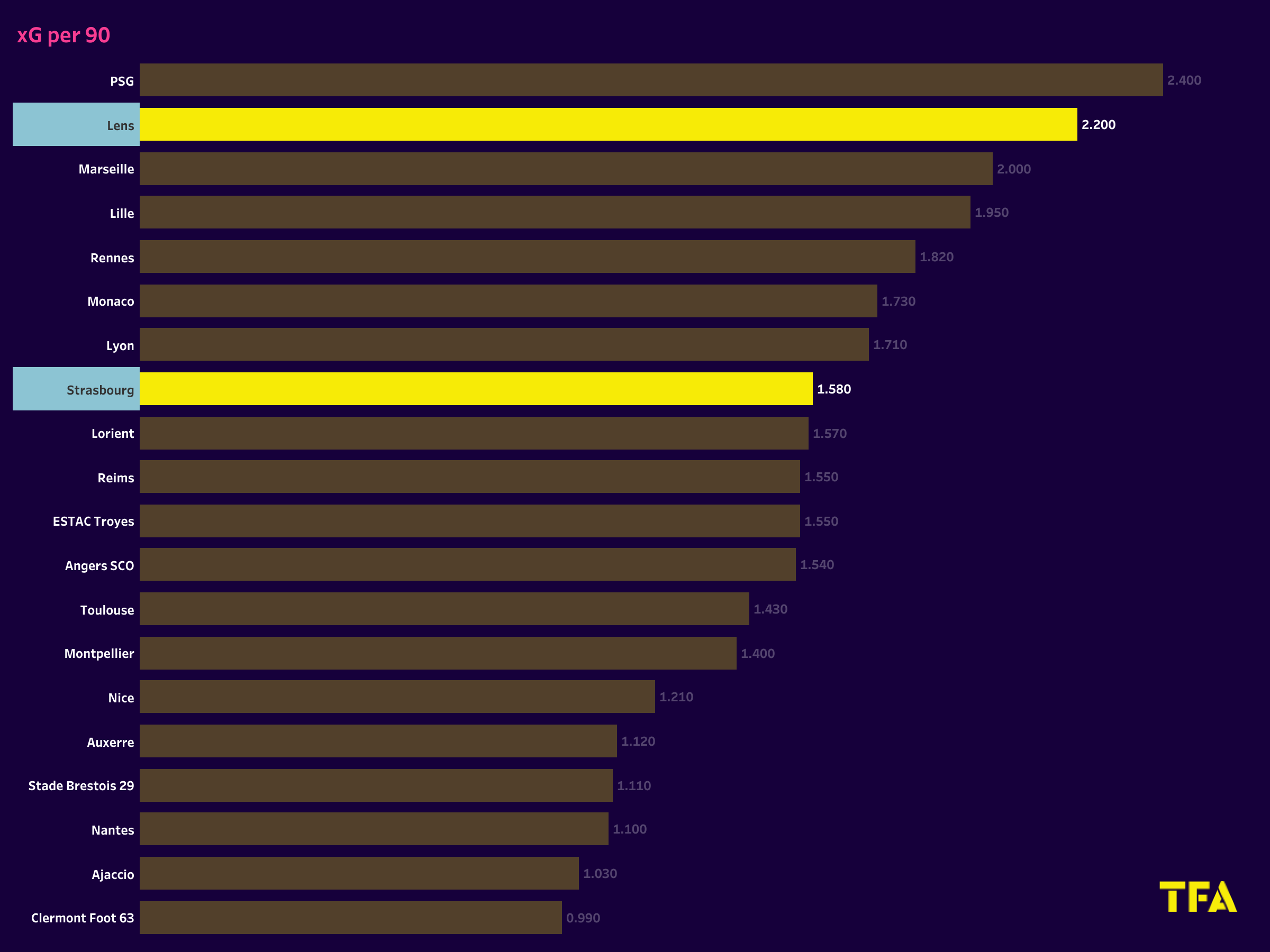 Lens in their thrashing of PSG 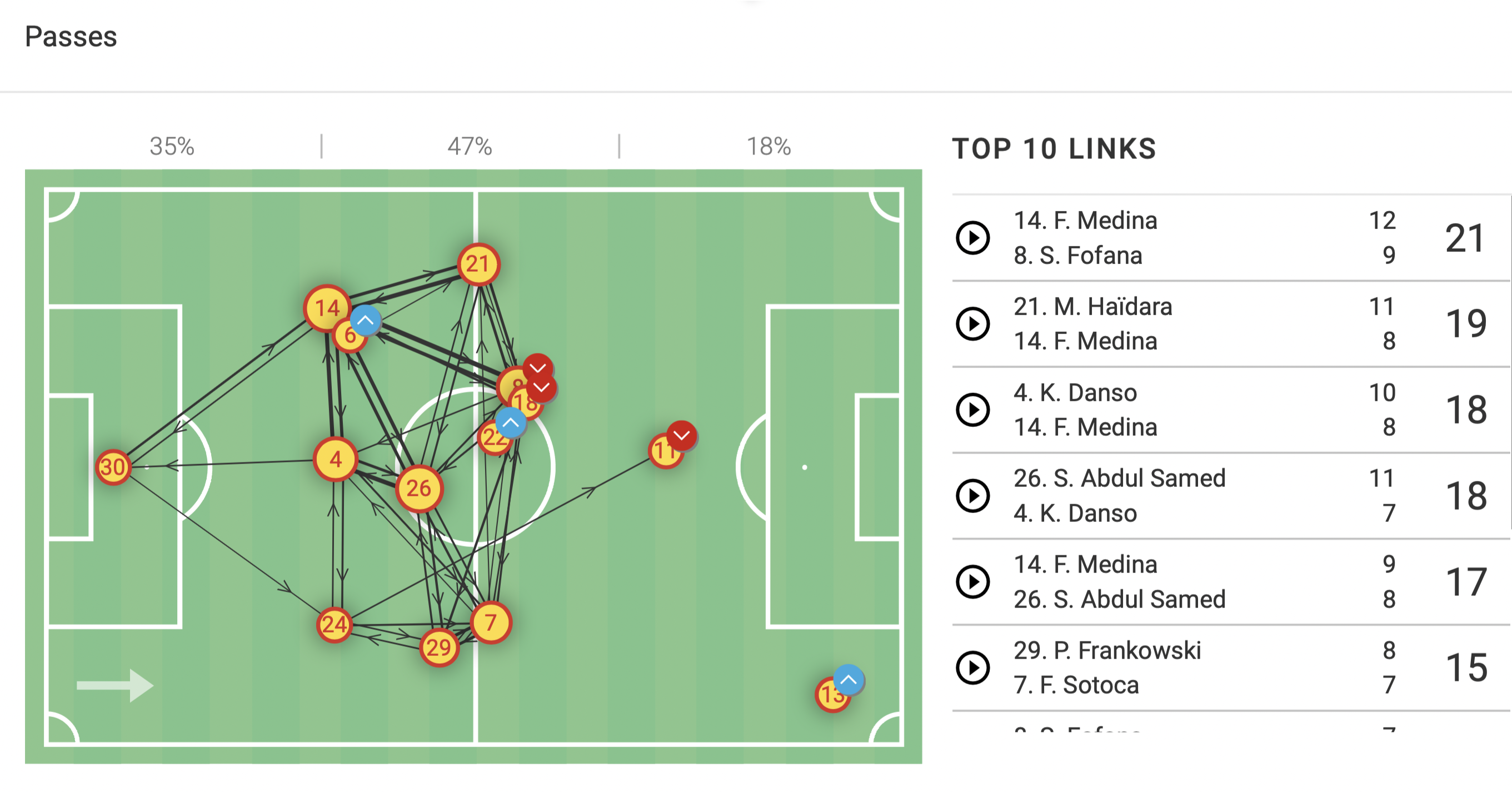 The above data is from Lens’ most recent home game against PSG. Lens won the match three goals to one. Lens played the match in a 3-4-2-1 formation. Louis Openda started on top with Maurice and Sotoka. The back three were comprised of Medina, Danso, and Gradit. It can be seen that Medina was heavily involved throughout the game, appearing in four of the top five links in the match. He constantly released the ball down the left and through the centre and created attacks for Lens from there, as seen below. 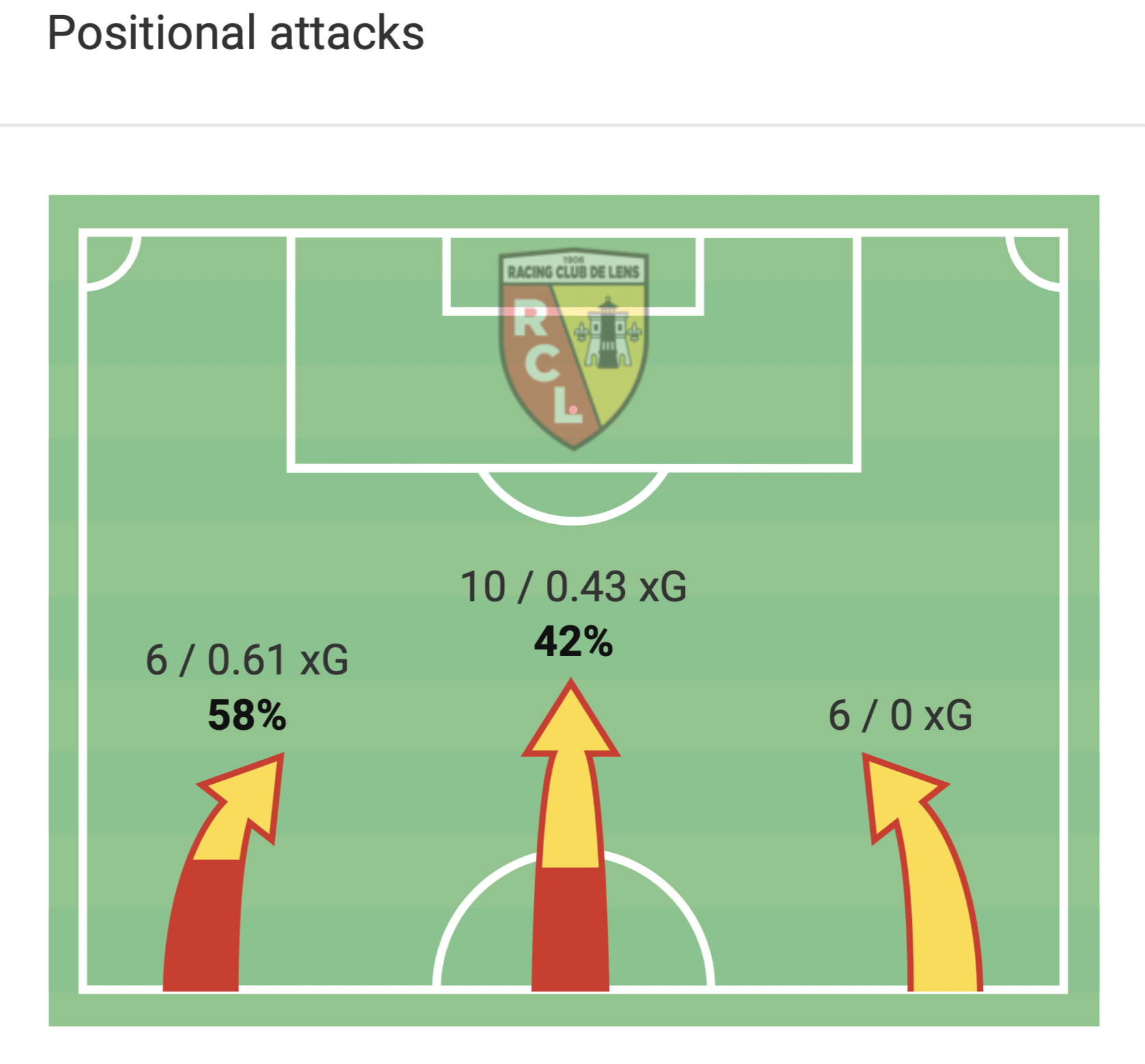 Lens players created 22 positional attacks and attempted a shot with every fifth attack. They created most of the chances from the centre, with ten in total having 0.43 xG. They were also frequently using the channel down the left to progress the ball forward and create an attacking threat. 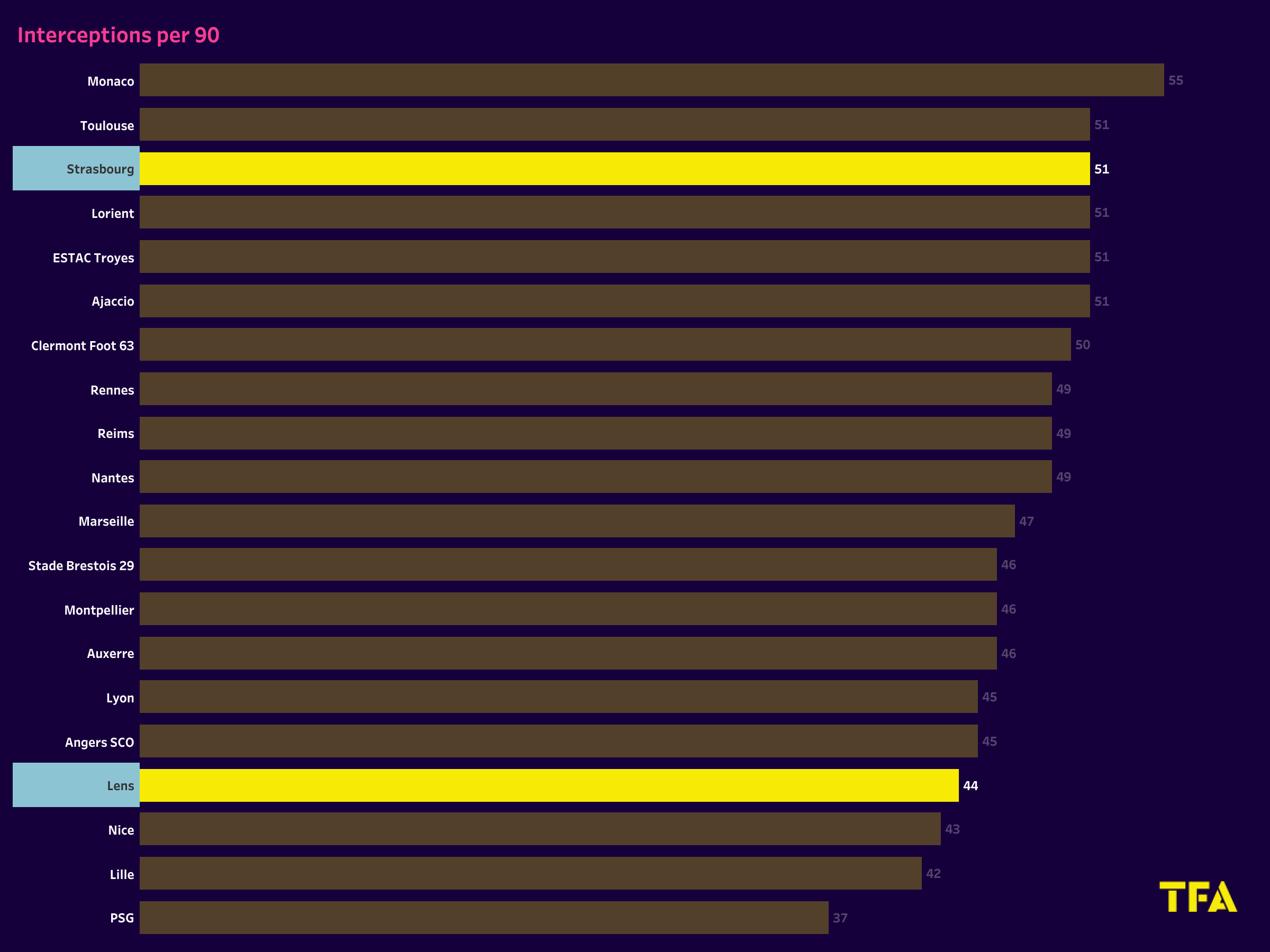 Franck Haise’s men have surprised many with the displays they are giving on the pitch. Their defence has been solid and has kept a clean sheet against the likes of Lyon and Marseille. Lens gives up 14.4 fouls per match and makes 44 interceptions on average. 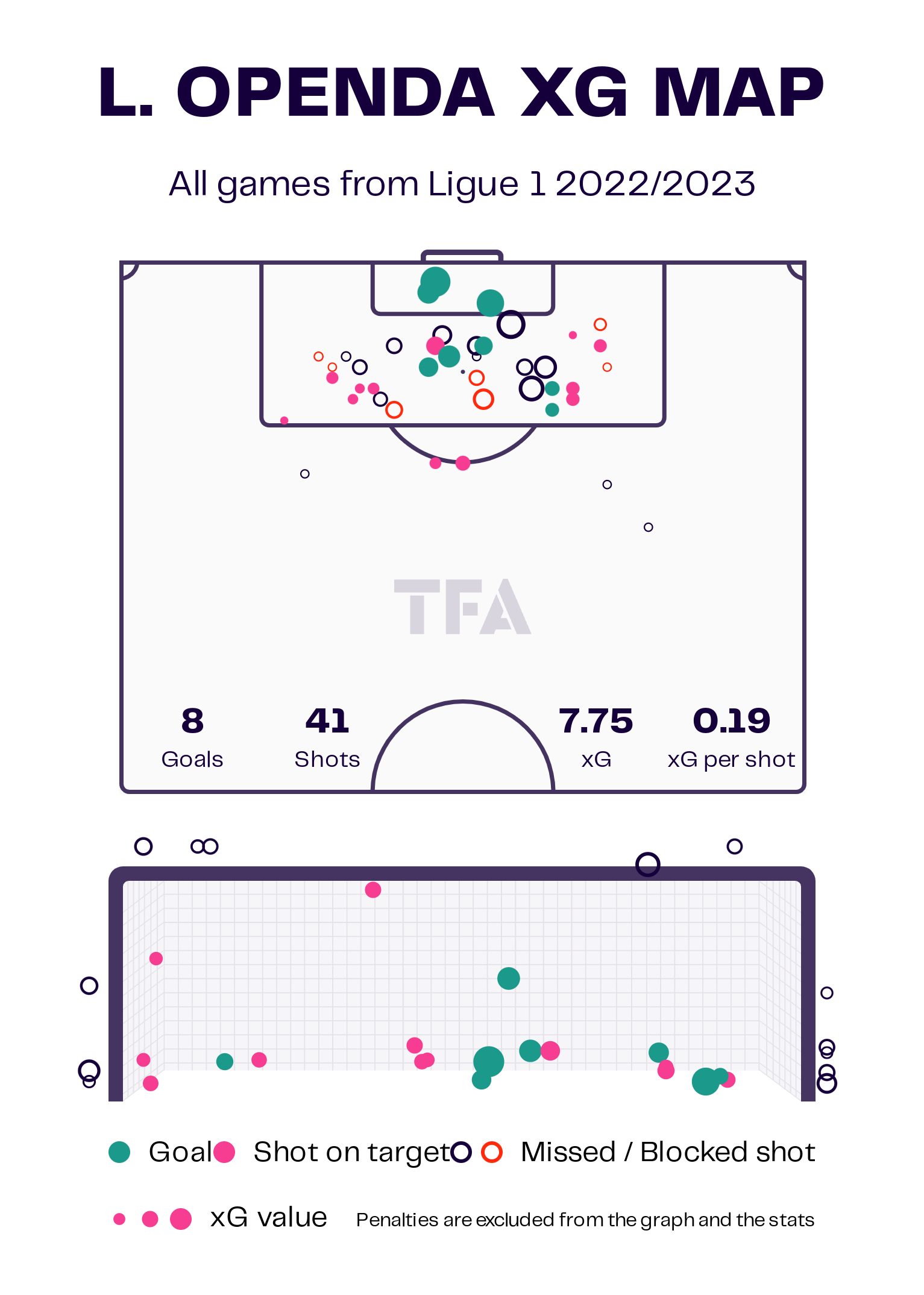 Luis Openda has found his touch in Ligue 1 this season. The winger has managed to score seven goals for his side. The Belgian’s main position is centre forward, but he also plays as a left winger or right winger. He managed to score all three goals in a 3-0 victory against Toulouse after being subbed on in the 60th minute. He enjoys getting into dangerous positions inside the box to receive the ball and score goals. The Belgian has attempted 37 shots and has an xG of 7.19. All of his goals have come from inside the box. This shows his positional awareness and ability to enter dangerous areas.

Lens manager Haise saw his team come through their draw with Nice unscathed, leaving the hosts with a quartet of confirmed absentees for this showdown, including ACL victims Jimmy Cabot and Wuilker Farinez. The attacking duo of David Costa (shoulder) and Adam Buksa (ankle) do not have as long a road to recovery but should also miss out here. Jean Onana can look forward to a start against the champions if that is the case, although Lois Opendareplaced the Cameroon international before the hour mark on Thursday and could now come in for Onana or Wesley Said.

Strasbourg were due to be without Alexander Djiku for their trip to PSG after the Ghanaian defender was caught up in a wide-scale betting scandal, but he stepped out onto the turf as captain after his ban was overturned. Les Couriers did not sustain any fresh concerns in the loss to the champions, but Colin Dagba, Eiji Kawashima, Dimitri Lienard, Maxime Le Marchand, Nordine Kandil, and Thomas Delaine are all struggling with injuries and could miss out again. Right-back Ronael Pierre-Gabriel will be back from his own suspension and will expect to displace Ismael Doukoure in the rearguard, while Habib Diallo’s fresh legs could be preferred to Kevin Gameiro in attack given the short turnaround.

Overall, it will be a thrilling clash between the two sides, and Franck Haise’s men have the upper hand going into the game. Lens will be looking to close the gap between them and the leaders. A win for Strasbourg in this game could help them towards the end of the season, as it was the crucial three points that kept them out of the relegation zone.

Transfer Analysis: Why Boubakar Kouyate has earned his way back into...

Under the microscope: Metrics behind Brest’s struggle at the start of...

Reborn: Statistics suggest that Tuchel and PSG have a star back...