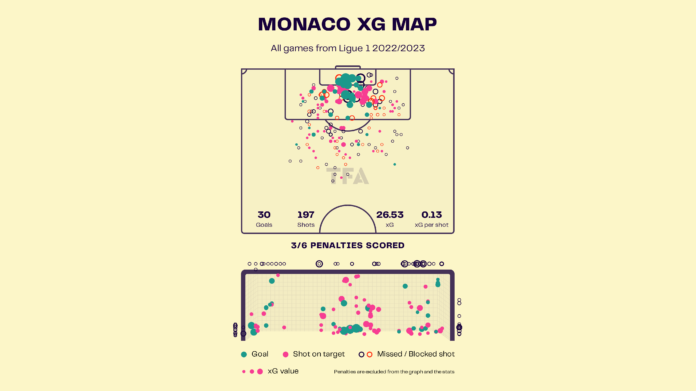 Lorient will welcome Monaco to Stade du Moustoir on matchday 18 in Ligue 1, with a chance to overtake them for a UEFA Europa Conference League qualifying spot next season.

Lorient began the domestic campaign unbeaten in their first five home games, conceding just a single goal in all but one of those encounters. They are in sixth position, having played 17 matches this season, and have lost three straight league games at home. Lorient have one win, one draw, and three losses from their last five matches in Ligue 1.

Monaco have only lost one league match away from home this season, while four of their six clean sheets have occurred away from home. The team has four wins from their last five Ligue 1 matches. In addition to that, they have won nine of their 12 Ligue 1 games played since the beginning of September and are currently in fifth place with 33 points from 17 matches played. The above viz shows the percentile rank of Lorient in attacking, defensive, and possession stats compared to other teams in Ligue 1. We can clearly observe that the team is at an average rank in the overall stats; the few areas of decent rank include goals per 90 and pass accuracy. The team averages 1.65 goals per 90 minutes in the current season. 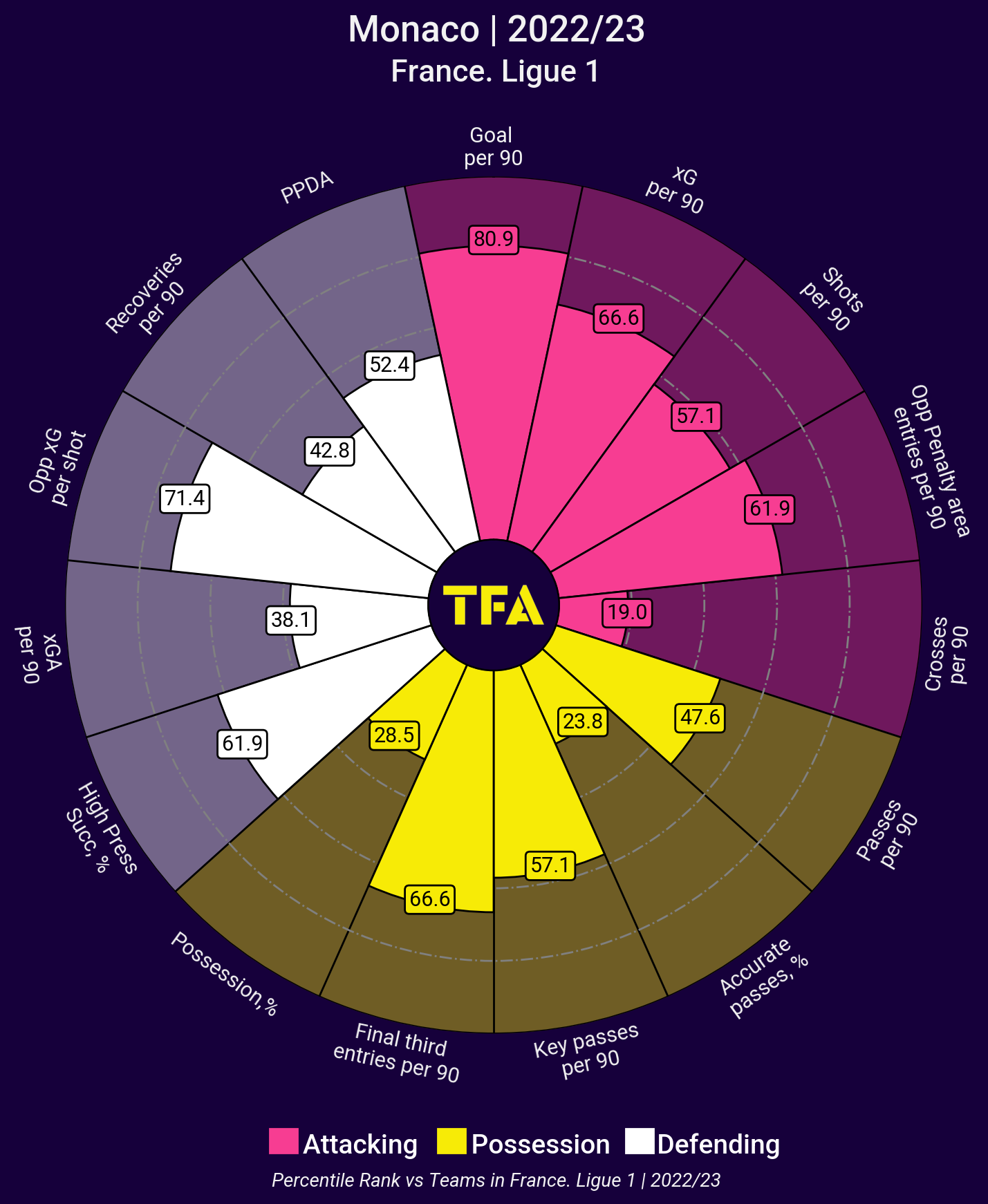 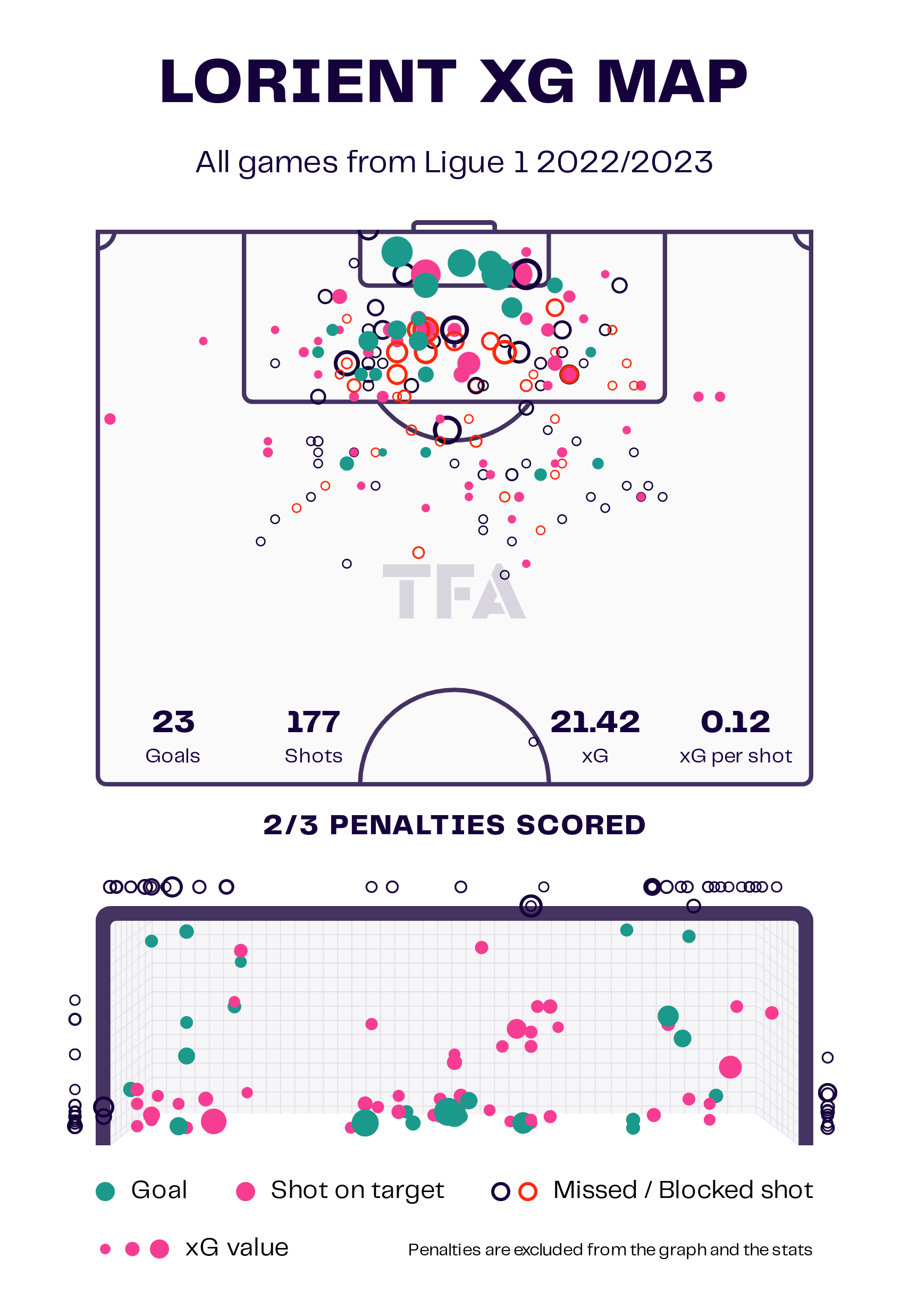 Lorient are currently in 6th place in the 2022–23 French Ligue 1, with 31 points from 17 matches played. They have won nine matches, drawn four, and lost four. They have scored 28 goals (21.4 xG) and conceded 24 goals (26.4 xGA). They attempt 10.59 shots on goal per 90 and have a shot accuracy of 41.6% in the league. Most of their goals have come from inside the penalty box, with a few shots on target from long distance as well. Additionally, the team has managed to create more threats from the left flank and left side of the penalty box.

Monaco in front of the goal 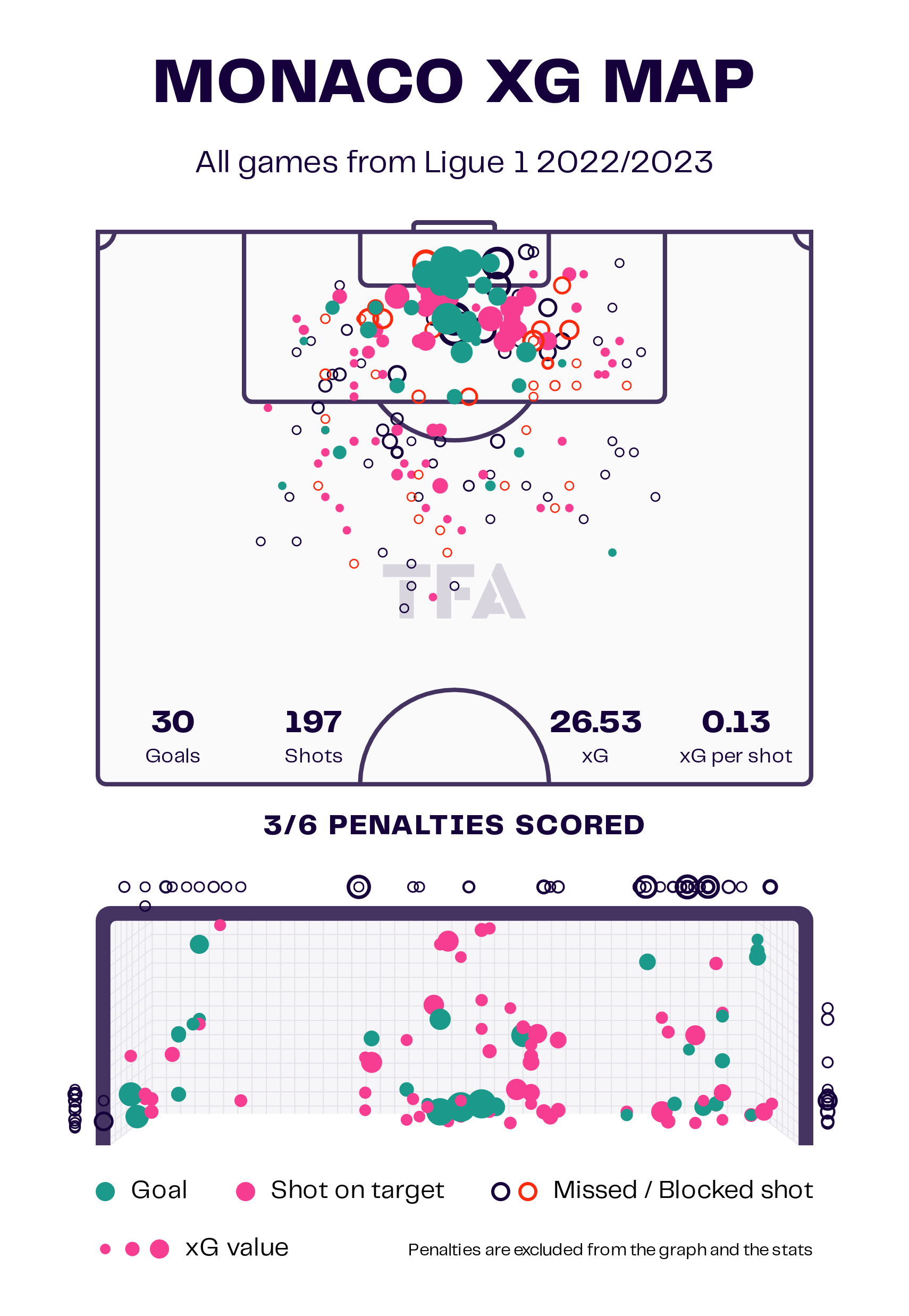 Monaco are currently in fifth place in the 2022–23 French Ligue 1, with 33 points from 17 matches played. They have won ten matches, drawn three, and lost four. They have scored 33 goals (26.5 xG) and conceded 23 goals (24.2 xGA). They attempt 11.94 shots on goal per 90 minutes and have a shot accuracy of 48.7% in the league. Monaco have scored most of their goals from around the penalty area and the six-yard box. The team has also managed to score goals from distance. The goals scored have been spread out evenly inside the penalty box, with a large concentration of goals coming from central positions. 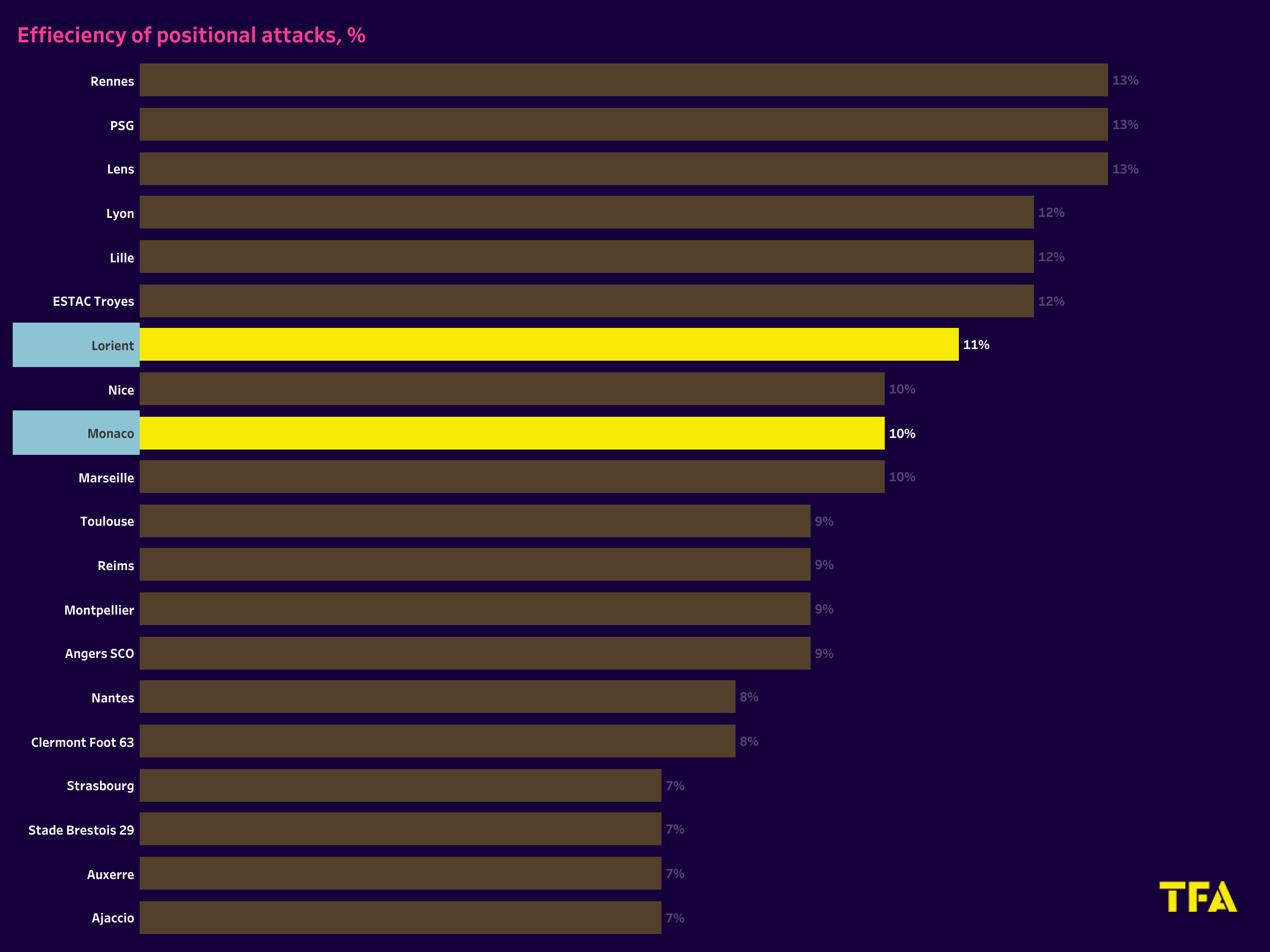 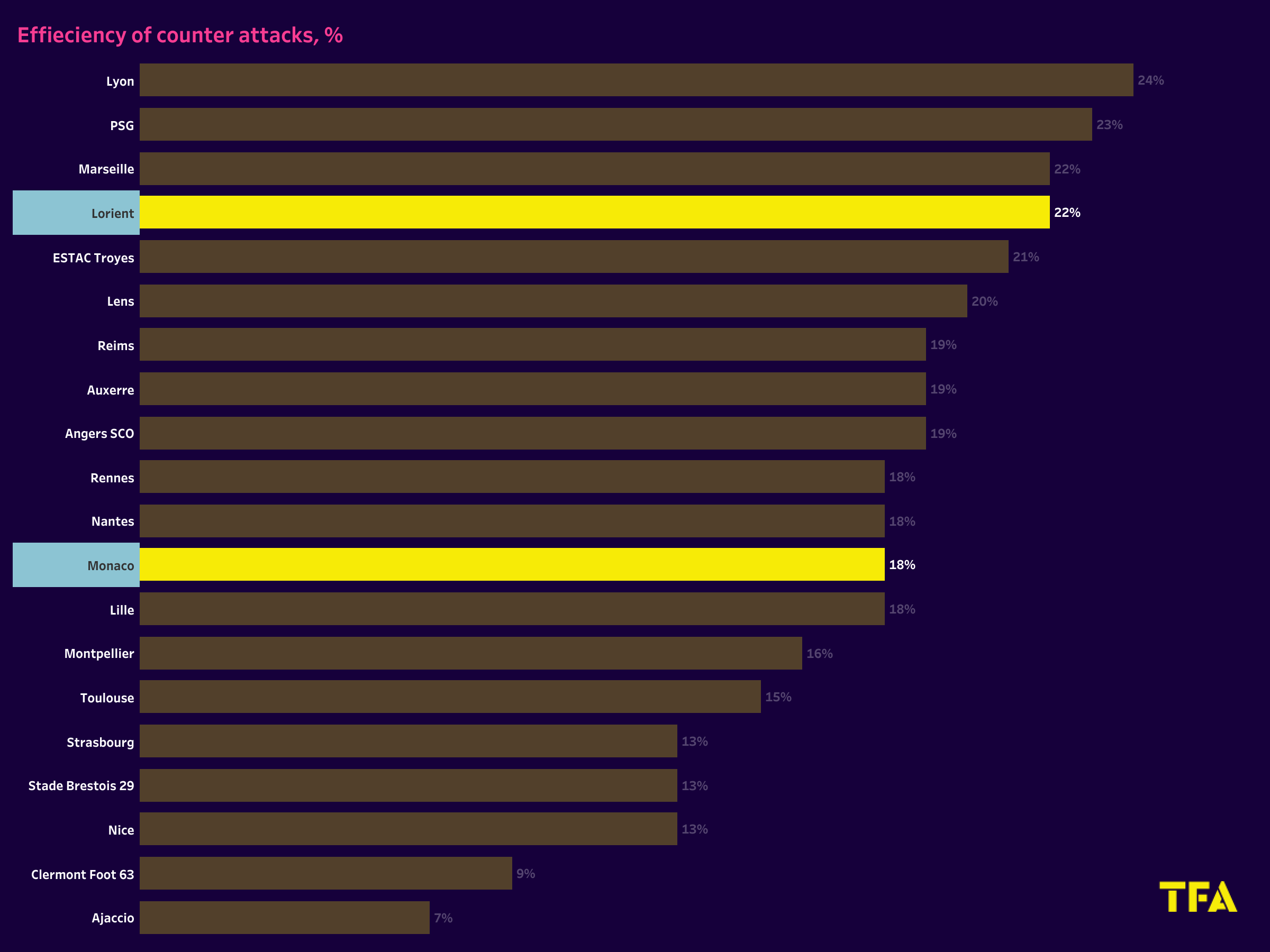 Lorient are at a decent rank when it comes to their efficiency in attack, and the above benchmarking shows where they stand currently in Ligue 1 as compared to other teams. Lorient are currently at 22% counterattacking efficiency, making 2.47 counterattacks per 90, with 33.2% of them ending in shots. They perform 25 positional attacks per 90, with 24.2% ending in shots.

Both teams at defence 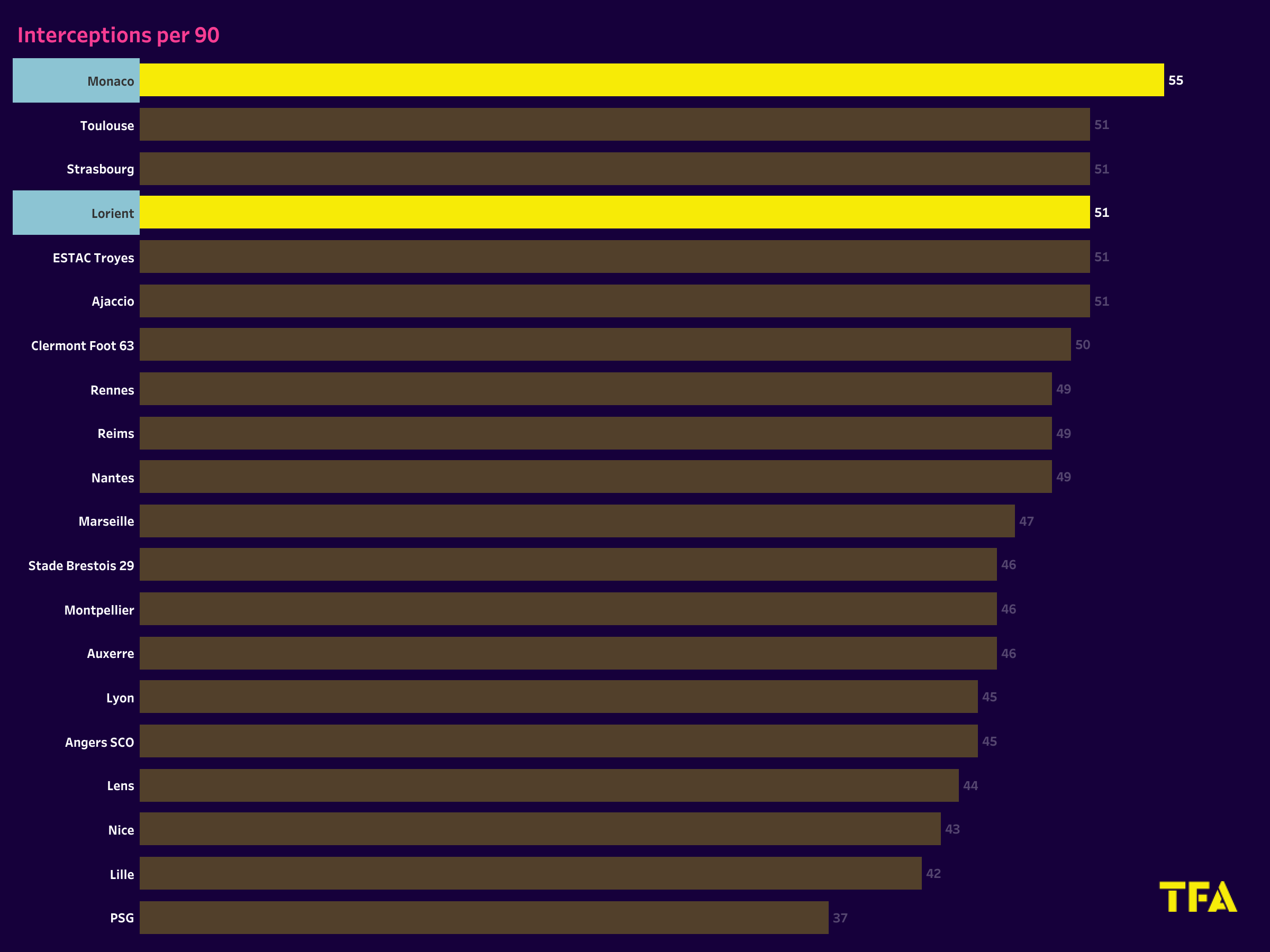 Lorient have surprised many with the displays they are giving on the pitch. Their defence has been solid and has conceded 24 goals, which is the 9th fewest goals conceded in the league. Lorient gives up 9.76 fouls per match and makes 51 interceptions on average. Defensively, they take part in 73.71 duels with a 61.3% success rate. 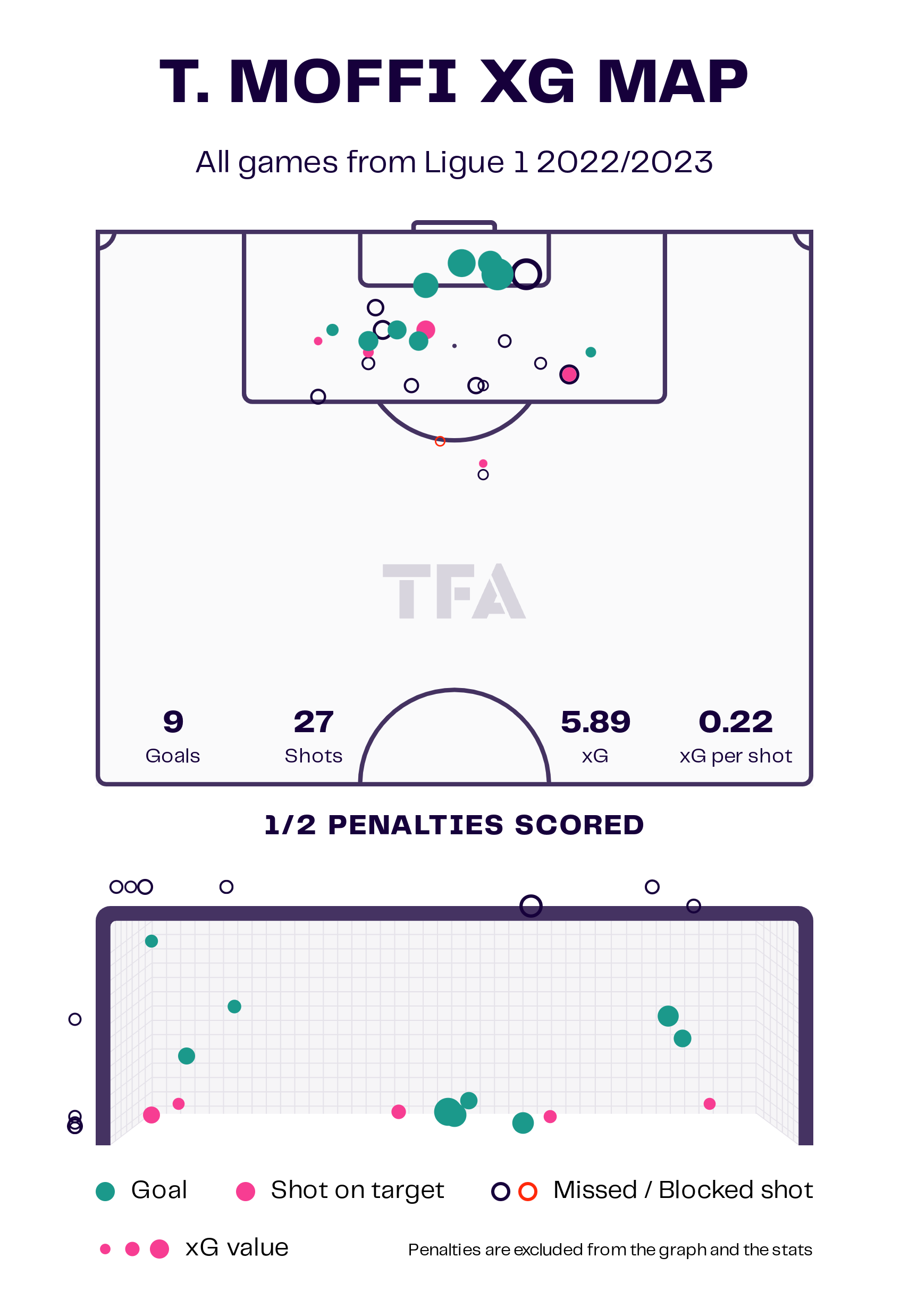 In the 2022–23 French Ligue 1 season, Terem Moffi has played 15 matches (plus one as a sub). Terem has taken 17 shots on target from a total of 31 shots and scored ten goals (6.61 xG). Terem Moffi averages 12 passes per match with a pass completion rate of 76% and has zero assists. All of the goals have come from inside the box. Terem Moffi has also attempted shots from outside the box and managed to put a few of them on target. His form is something that Monaco’s defence will need to keep in mind.

For Lorient, Yvon Mvogo will be sidelined until early March because of a tendon injury, Theo Le Bris has a sprained ankle, and Julien Laporte might not be available until the end of January due to a hamstring strain. Monaco’s Willem Geubbels could be available soon despite a muscle injury, while Kevin Volland might not be back until the middle of the month after hurting his ribs.

Overall, Lorient are in better form, but they have not faced a formidable opponent this year, with their two wins coming against an Angers side who are bottom of the Ligue 1 table and a sixth-tier team at the Coupe de France. Their backline will have to contend with a Monaco side filled with plenty of attacking options and eager to close the gap between themselves and a Champions League place.

Transfer Analysis: Why the 21-year-old Serb is on Marseille’s wishlist