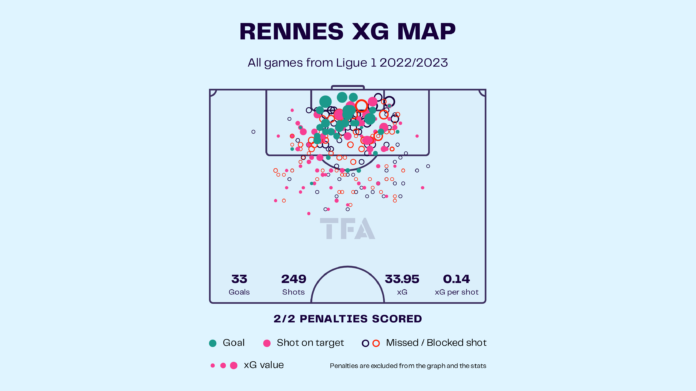 Lorient will play against Rennes at home on matchday 20 of the Ligue 1 2022/23 season. As we surpass the halfway point of the Ligue 1 campaign, Lorient can close the gap between themselves and a place in Europe when hosting Rennes on matchday 20 at Stade du Moutsoir. Lorient are seventh in the table following a 3-1 domestic defeat at Marseille, putting them five points behind Rennes, who upset Paris Saint-Germain 1-0 in their previous league fixture.

Since climbing back into the French top flight two seasons ago, it has been a real struggle for Lorient to remain in Ligue 1 until the 2022-23 campaign. With 32 points after 19 domestic games, it is the highest tally ever for this club at this stage of a campaign, putting them in contention to potentially compete in Europe for only the second time in their history.

At the moment, Rennes have picked up 37 points domestically, their best return at this stage of a Ligue 1 season, while also scoring 36 goals. Scoring goals has rarely been a problem for Rennes in this competition, but preventing them has been an issue, particularly away from home. 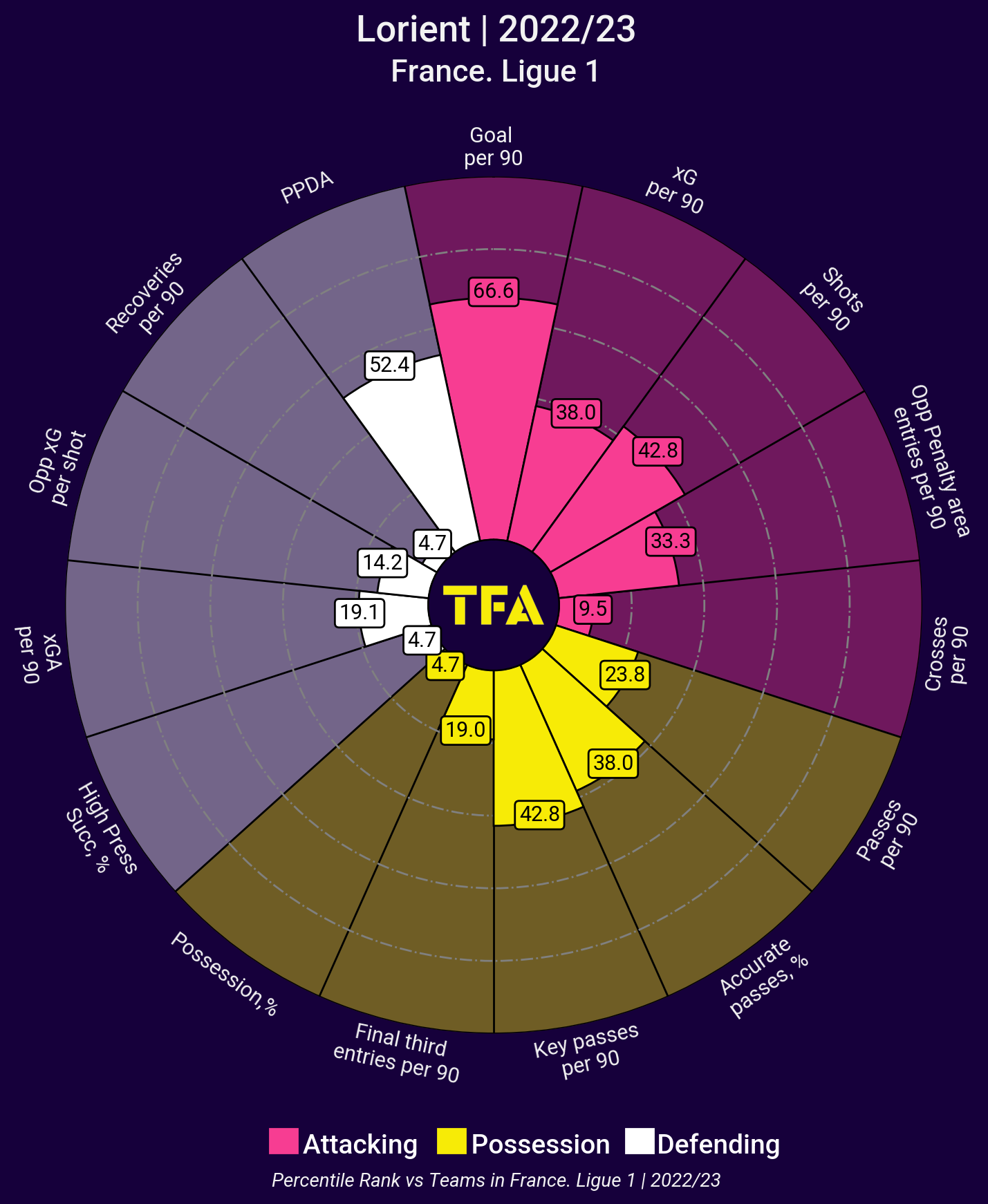 The above viz shows the percentile rank of Lorient in attacking, defensive, and possession stats compared to other teams in Ligue 1. We can clearly observe that the team is at an average rank in the overall stats; the few areas of decent rank include goals per 90 and pass accuracy. The team averages 1.67 goals per 90 minutes in the current season. 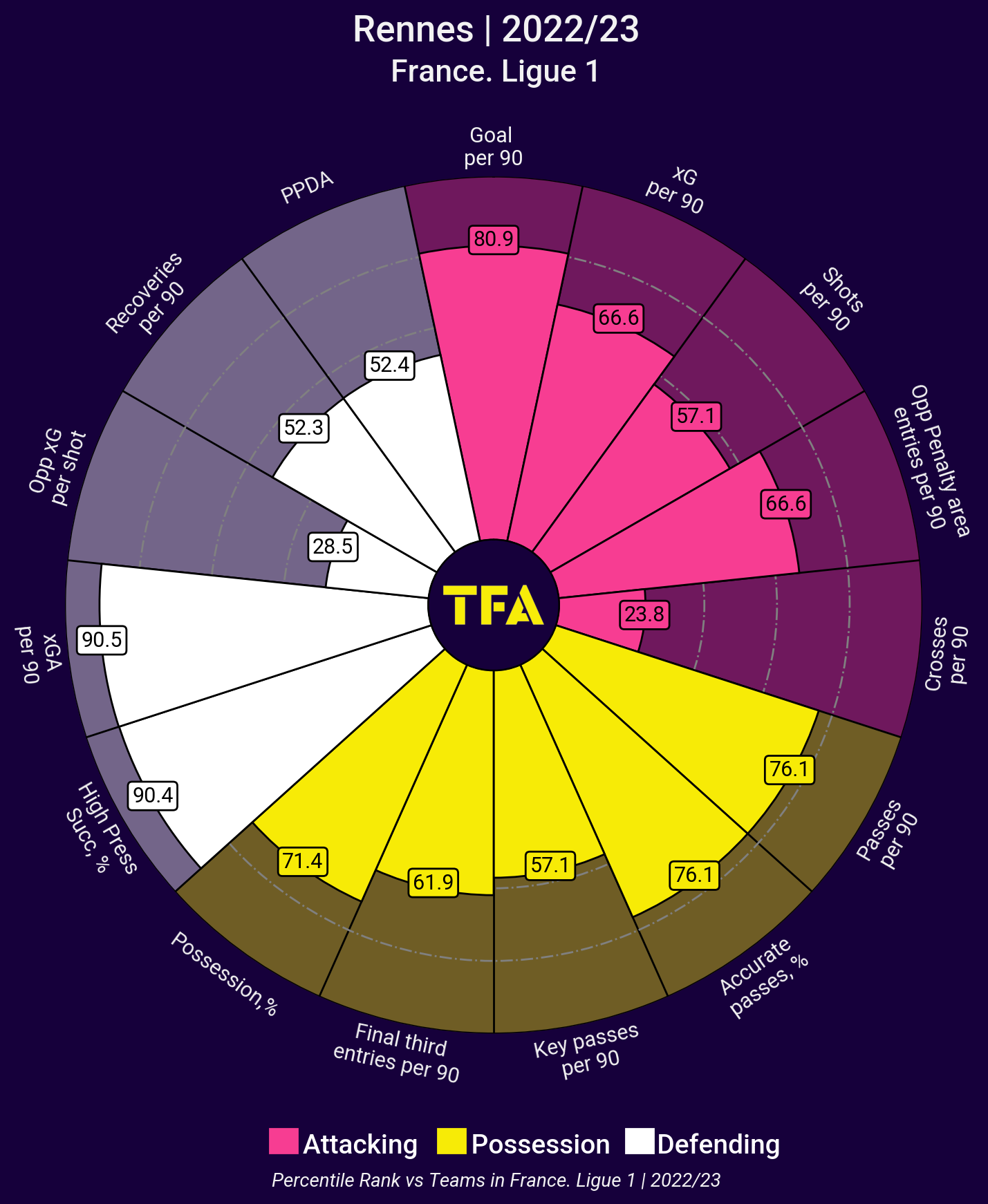 Both teams in front of the goal 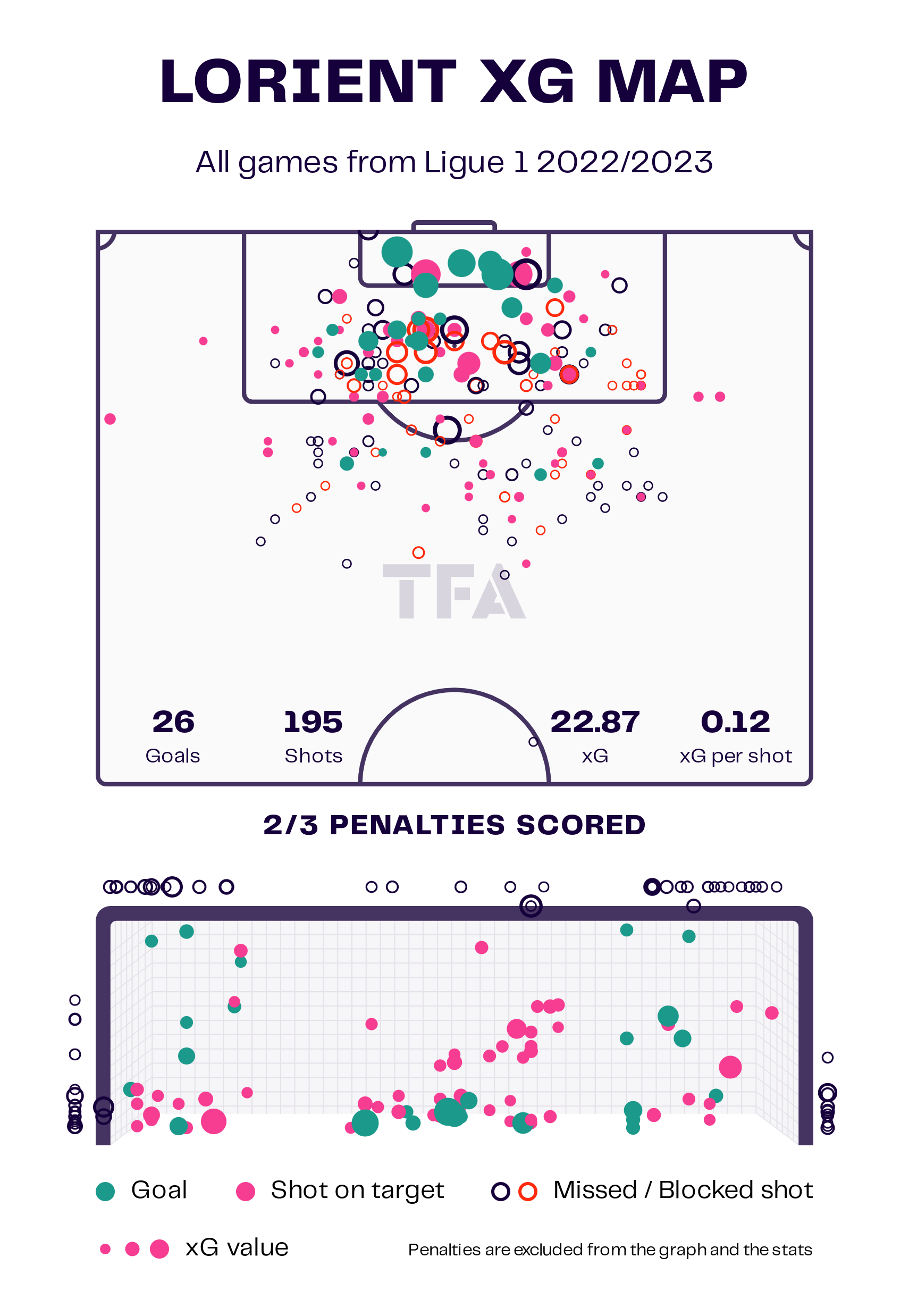 The above viz shows the shot map of the team in the current season. It can be observed that Lorient have scored most of their goals from just around the 6-yard box and have found the back of the net from distance on a few occasions. Lorient averages 10.44 shots per match with 43.1% accuracy. They have an xG of 22.87, which is comparatively low due to their low conversion rates in front of the goal. Additionally, Lorient have an xG per shot of 0.12 in the league. They have an xG per 90 of 1.37 for the current season. 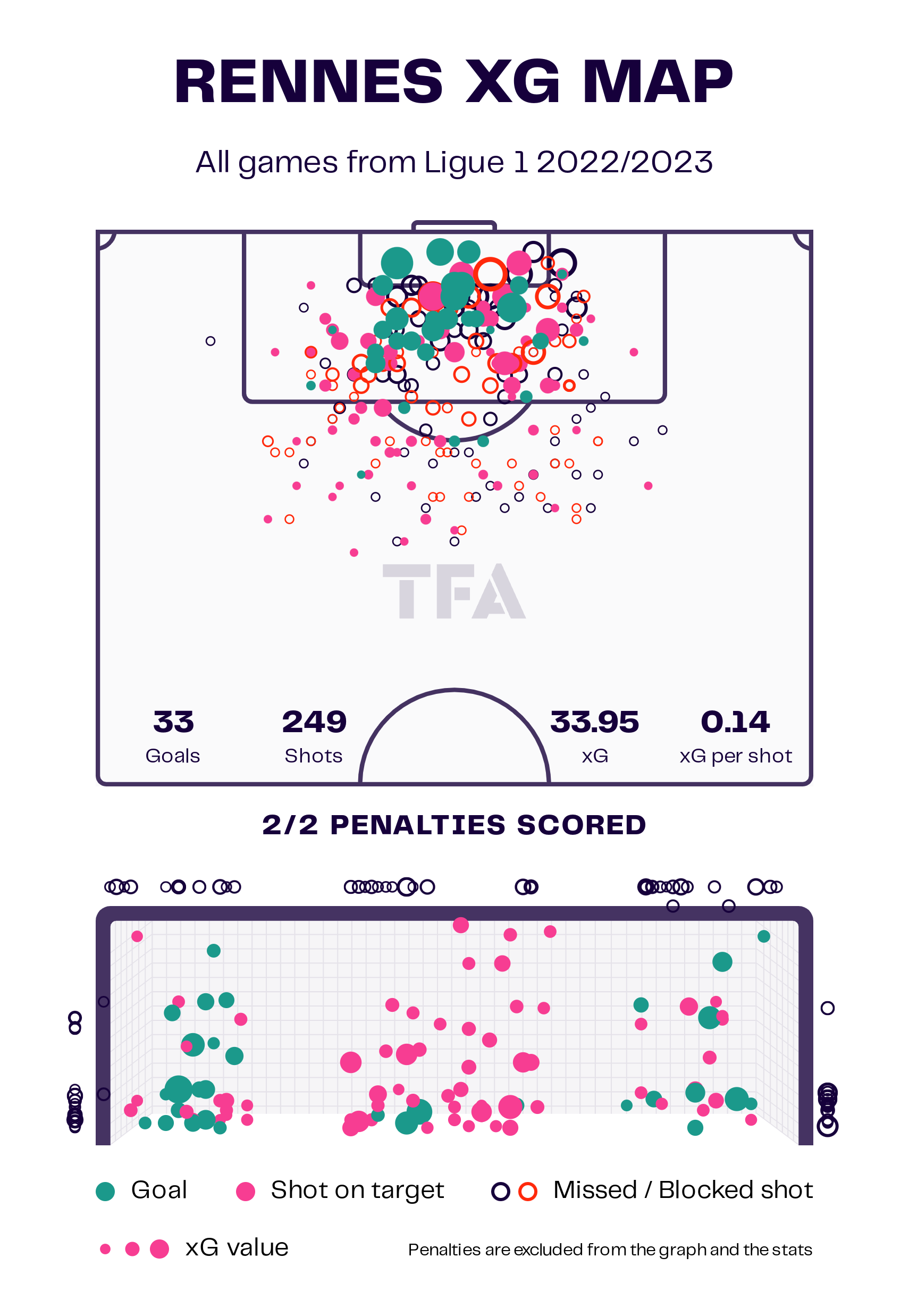 The French side has scored 36 goals with an average of just over two goals per match. The above viz shows the shot map of the team in the current season. It can be observed that Rennes have scored most of their goals from just around the 6-yard box. Rennes averages 14 shots per match with 50% accuracy. They have an xG of 33.95, owing to the fact that the majority of their shots have come from dangerous areas inside the penalty box. Additionally, Rennes have an xG per shot of 0.14 in the league. They have an xG per 90 of 1.98 for the current season. 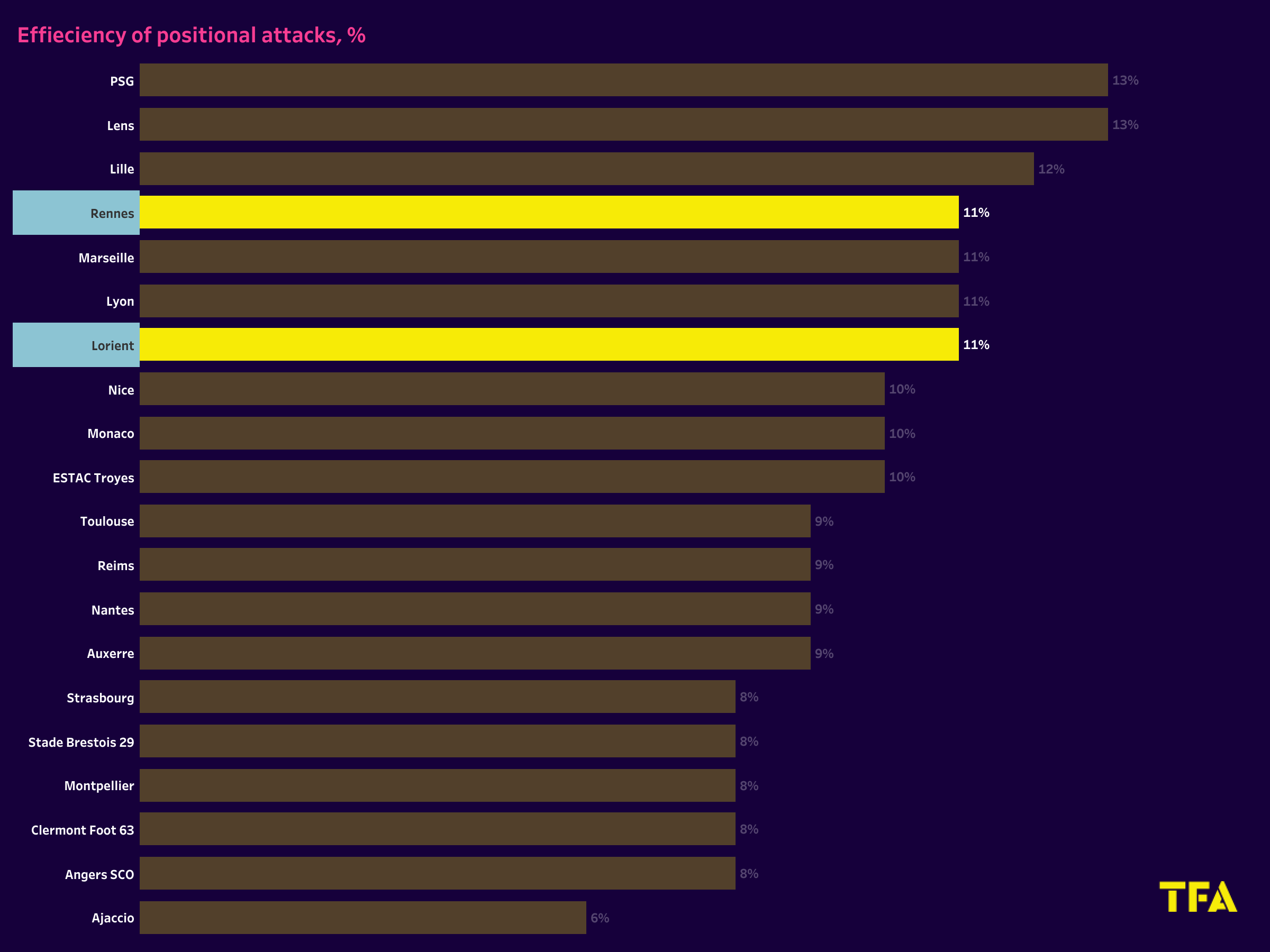 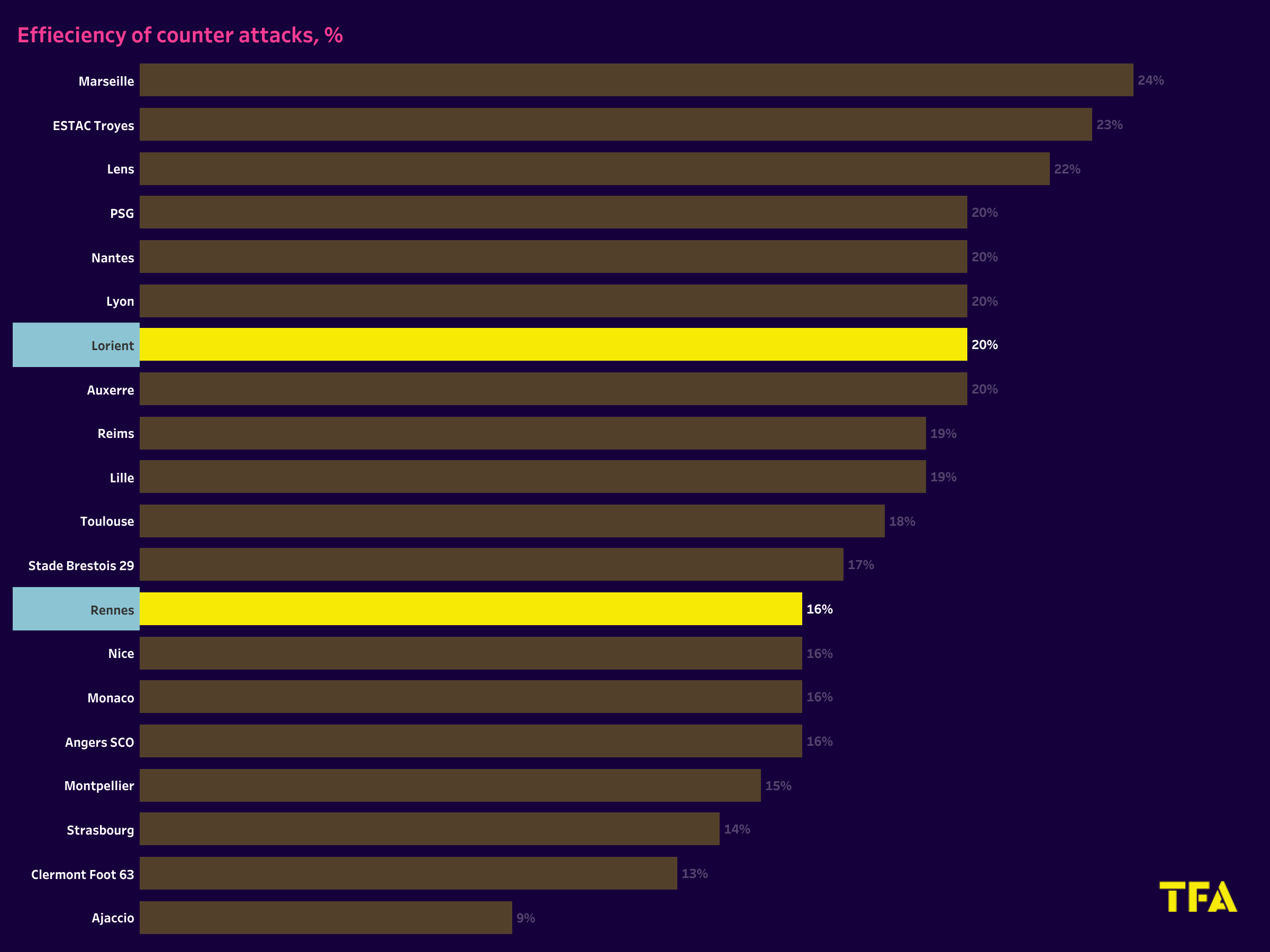 Lorient are ranked highly when it comes to their efficiency in attack, and the above benchmarking shows where they stand currently in Ligue 1 as compared to other teams. Lorient are currently at 20% counterattacking efficiency, which is among the top ten in the league, making 2.63 counterattacks per 90, with 31.9% of them ending in shots. They perform 24.64 positional attacks per 90, with 24% ending in shots.

Rennes, on the other hand, creates 31.4 positional attacks per 90, with 25% ending in shots. Rennes are currently at 16% counterattacking efficiency, which is decent in the league, making 1.4 counterattacks per 90, with 37% of them ending in shots. Rennes are among the top of the league in terms of efficiency in positional attacks, and it will take some smart defending from Lorient to stop Rennes’ attacking prowess. 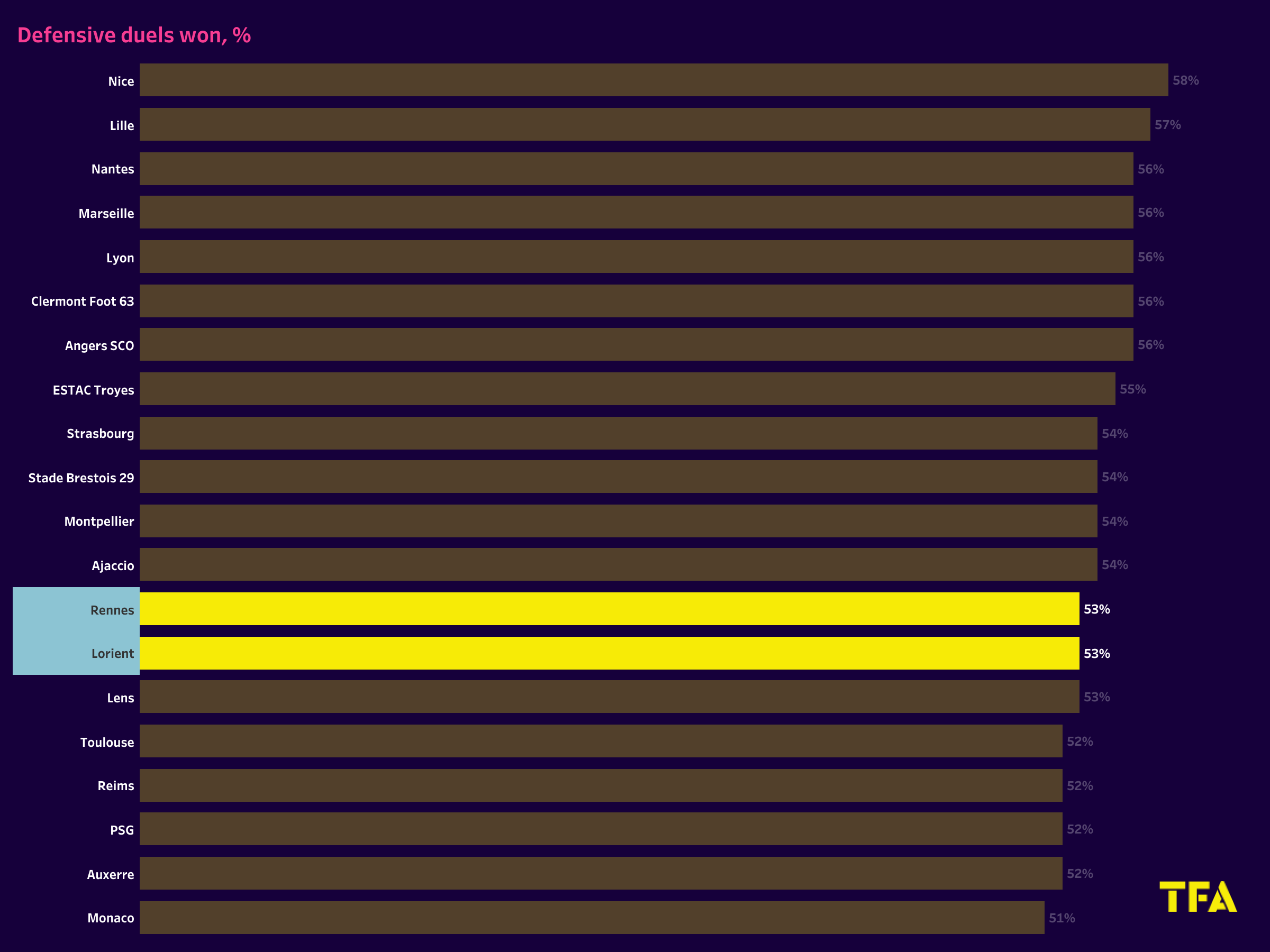 Lorient have not had a great ride in defence in Ligue 1 this season. Their defence has been average and has conceded 29 goals, which is among the top 10 goals conceded in the league. Lorient gives up 9.79 fouls per match and makes 44.63 interceptions on average. Defensively, they take part in 72.6 duels with a 60.8% success rate. 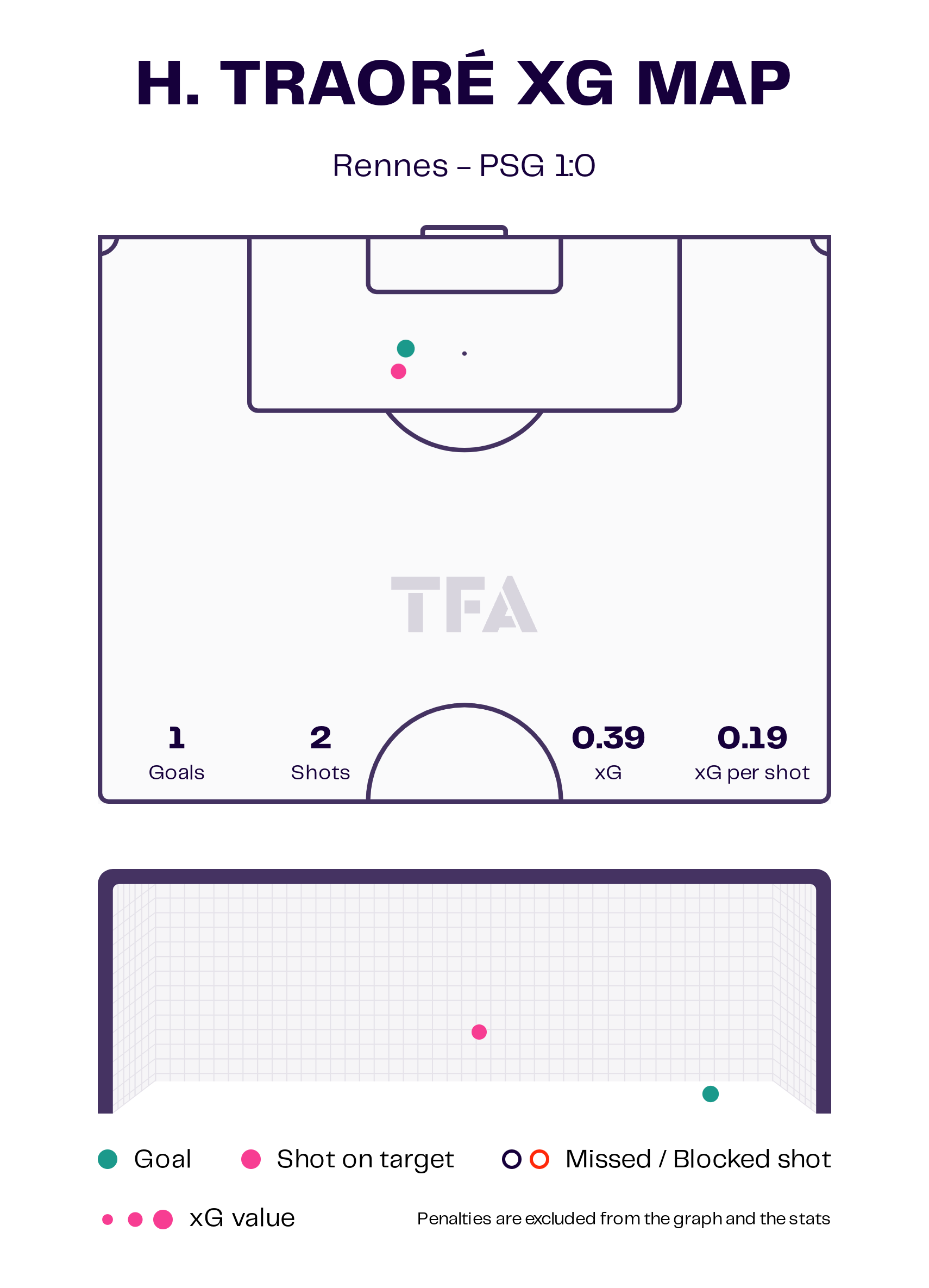 In the 2022–23 French Ligue 1 season, Hamari Traore has played 17 matches (plus one as a sub). He has five shots on target from a total of 14 shots and has scored one goal (0.71 xG). Although he has scored only one goal, Hamari shows intent to take a shot at goal, averaging 0.76 shots on goal per match. He puts plenty of intent behind his shots, which acts as an example for his teammates. As a right back, it is a rare skill to be able to find shots on target, which Hamari Traore possesses. Lorient will have to watch out for the Rennes skipper, especially with him being in ecstatic form lately.

For Lorient, Terem Moffi has found the back of the net in his last two league fixtures for Le FCL, as he and Dango Ouattara, who transferred to Bournemouth this month, both scored when they drew Monaco in their previous domestic home game. Lorient’s possible starting lineup: Manonne; Le Goff; Talbi; Matsima; Kalulu; Le Fee; Innocent; Cathline; Ponceau; Aouchiche; Moffi

For Rennes Martin Terrier will not be back this season, having torn his ACL, Xeka remains out with a sprained ankle. Rennes’s possible starting lineup: Mandanda; Wooh, Rodon, Theate; Traore, Majer, Ugochukwu, Truffert; Doku, Kalimuendo, Gouiri

Overall, Rennes are in the lethal form currently having toppled the French Champions in their last outing. Lorient, on the other hand, came from a three-goal deficit to defeat Marseille. Both teams are separated by five points, with Lille sitting in between at 34 points, and all three of them are somewhat fighting for the same European qualification at present.

Under the microscope: How has this veteran forward aided Lens’ attack?