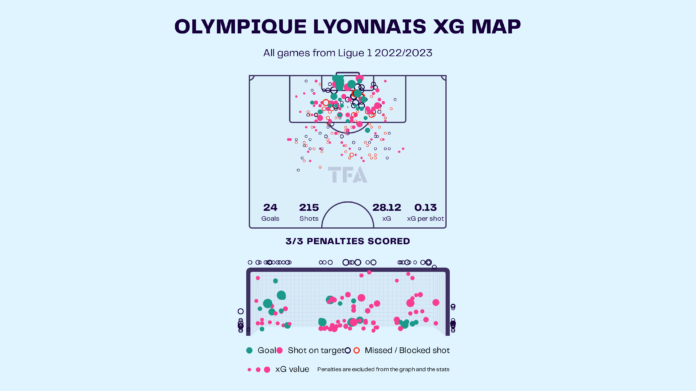 Nantes will face Lyon at Stade de la Beaujoire on matchday 18 in Ligue 1. Both teams will be desperate to grab all three points. The second half of the season is underway, and Lyon have already been shocked in their previous match at home. Nantes are having a tough season and will be looking to get into top gear and move up the ladder in the second half of the season.

Nantes are currently in 15th place in the 2022–23 French Ligue 1, with 17 points from 17 matches played. They have won three matches, drawn eight, and lost six. The team finished ninth last season and is currently not in a position to improve on its standings from the previous season. They will be looking to bag all three points in a crucial home game. They won their last home game against Auxerre one-nil and will hope to do the same again.

Lyon are currently in eighth place in the 2022–23 French Ligue 1, with 24 points from 17 matches played. They have won seven matches, drawn three, and lost seven. They played their last match against Clermont, which they surprisingly lost one-nil at home.

Nantes will hope to capitalise on the recent Lyon slip-up, and Lyon will be looking to bounce back from their loss with a strong away victory.

We now look at some of the stats that could predict the outcome of the match. 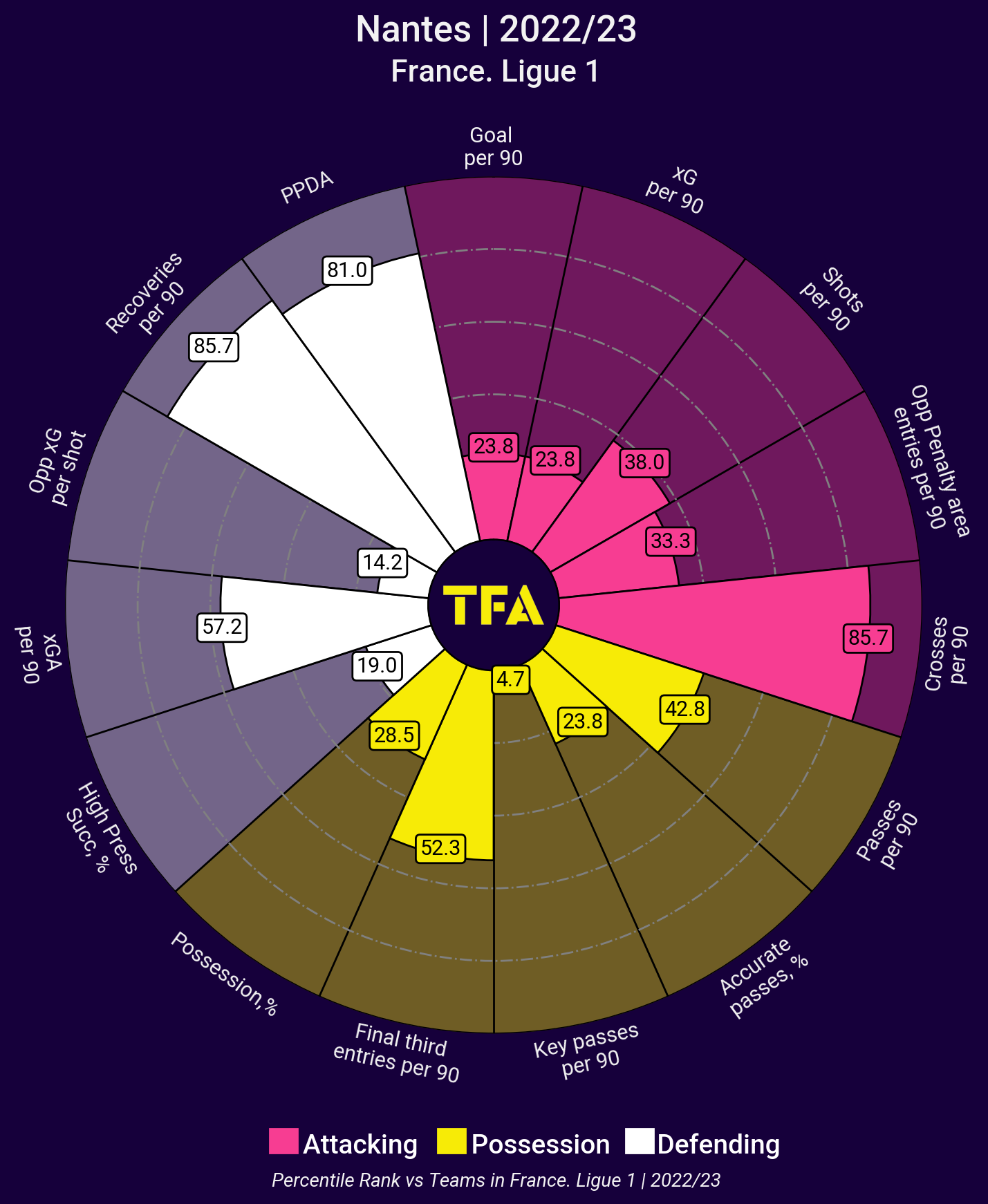 The above viz shows the percentile rank of the team in attacking, defensive, and possession stats compared to other teams in the French League. We can clearly observe that Nantes are ranked at the bottom in the defensive stats, especially for high-pressing success. They are ranked poorly in attacking displays, and Nantes have a low xG rate of 1.34 per match. The area where they excel is in making recoveries, averaging 82.41 recoveries in the current season. They are putting 17.24 crosses into the box on average. 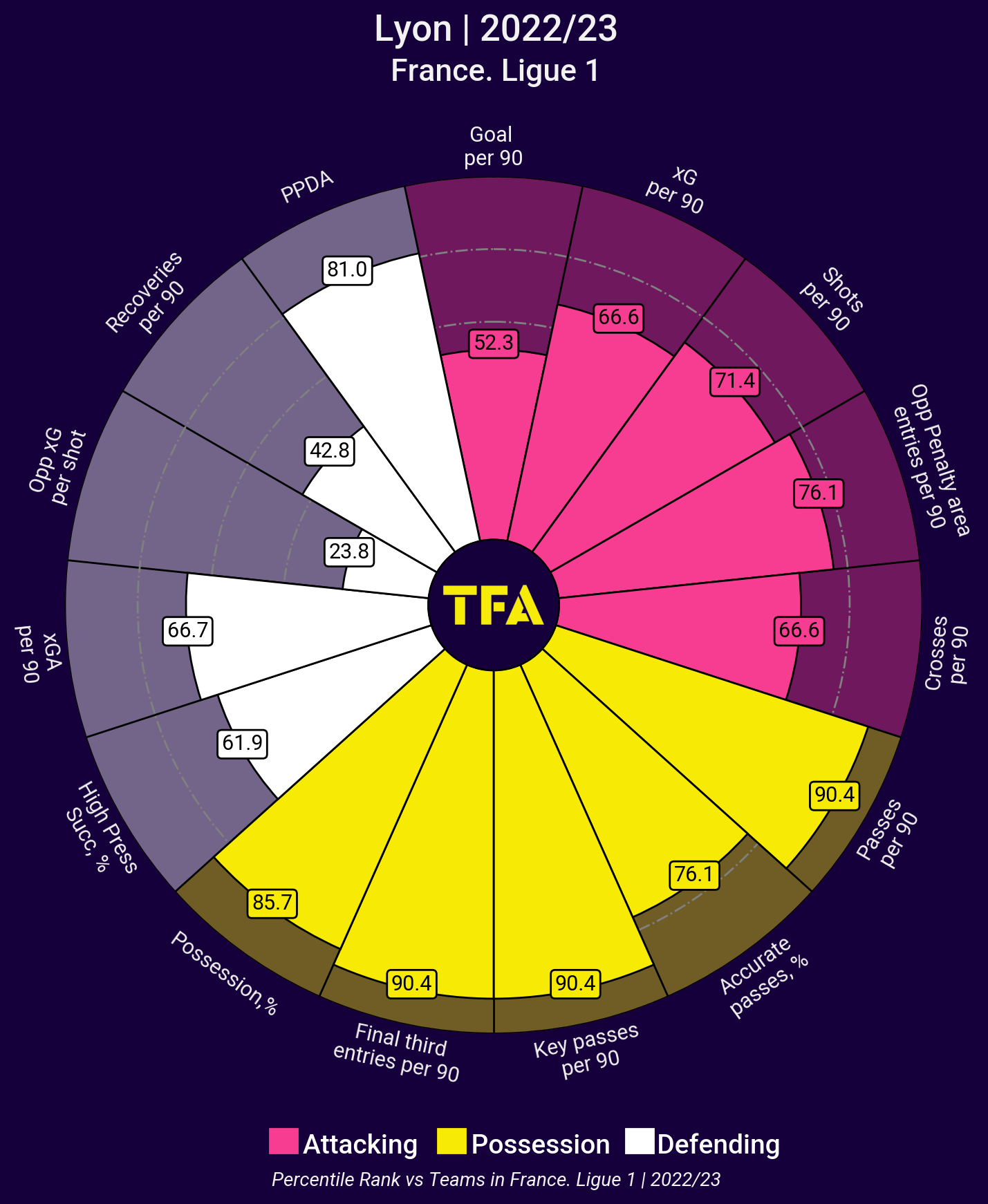 The above viz shows the percentile rank of the team in comparison to other teams in Ligue 1. It can be observed that the team is well-ranked in the division. They have done well to pass the ball and score goals. But the percentile rank in other departments like attack, goal contribution, and xG is a bit disappointing. The team makes 87.6 recoveries per 90 minutes and averages 18.29 crosses per match with 32.8% accuracy. 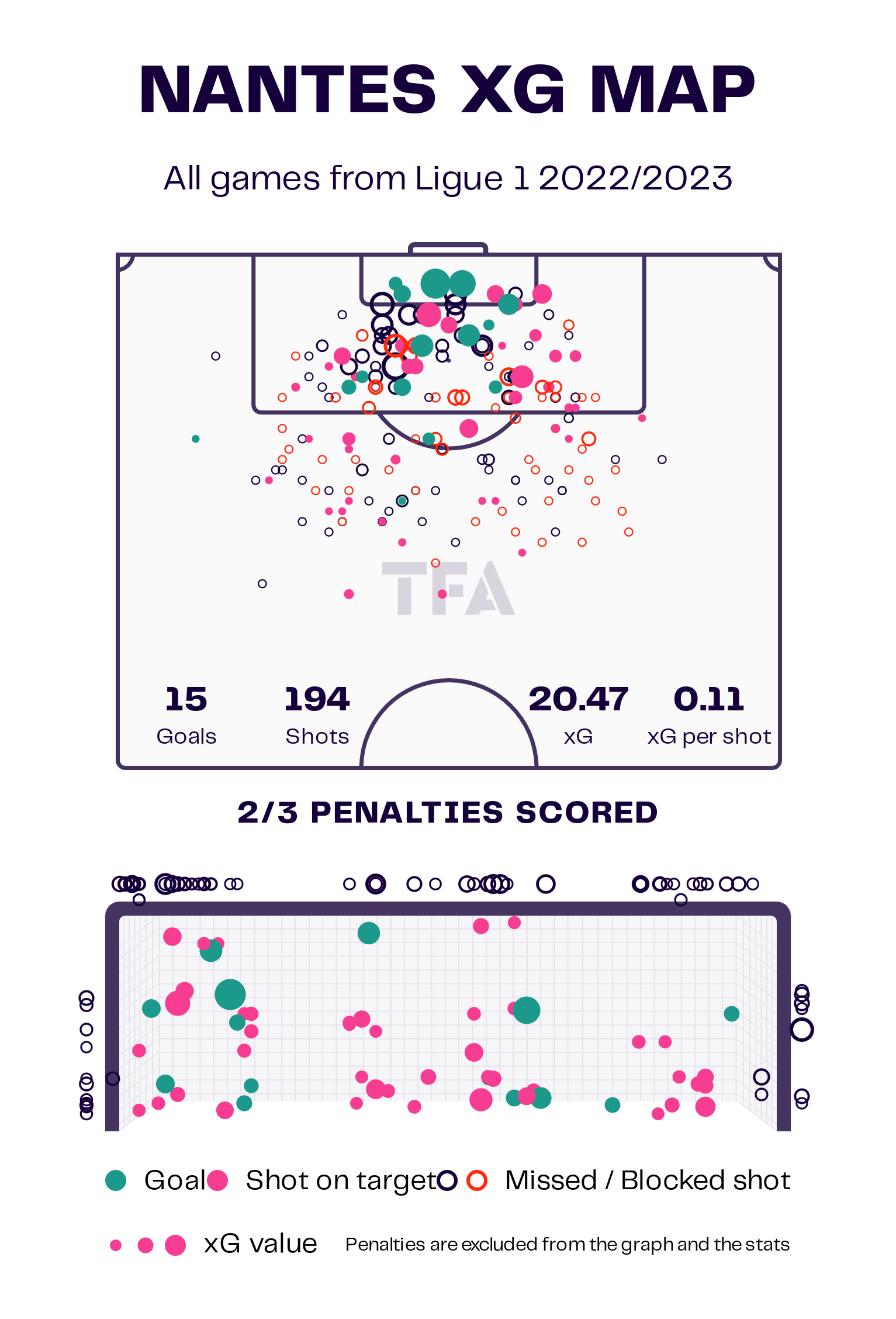 Lyon in front of the goal 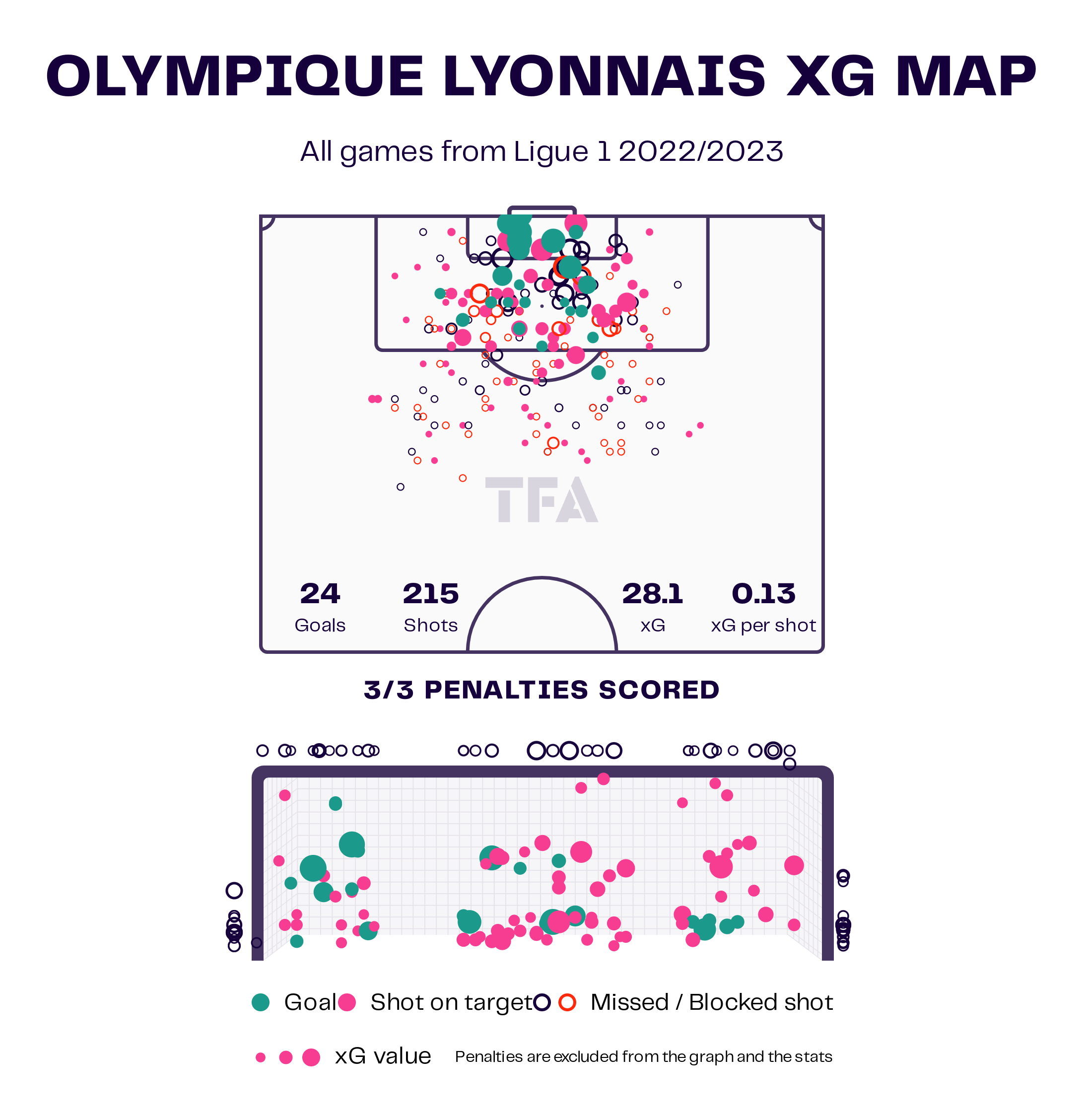 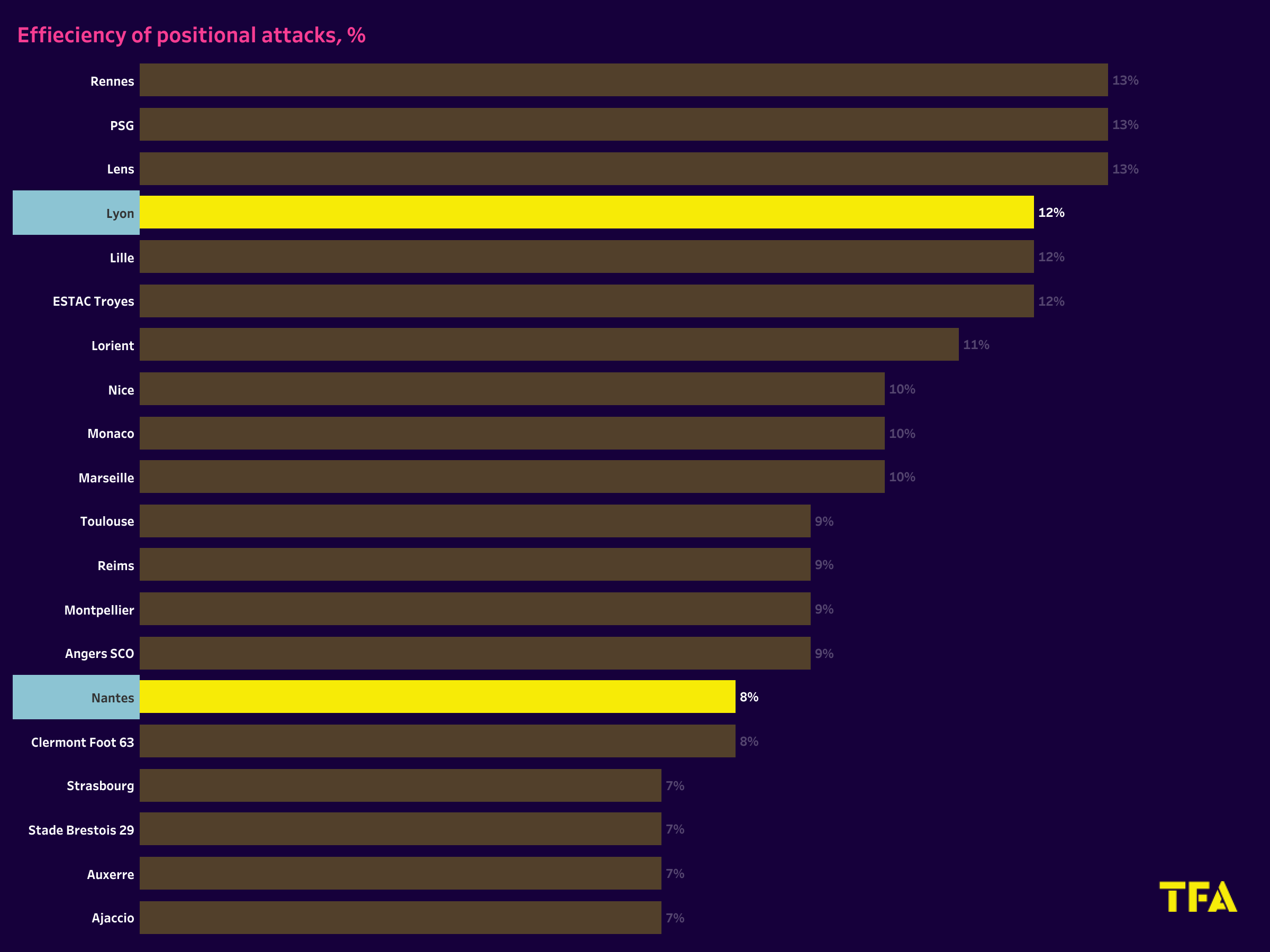 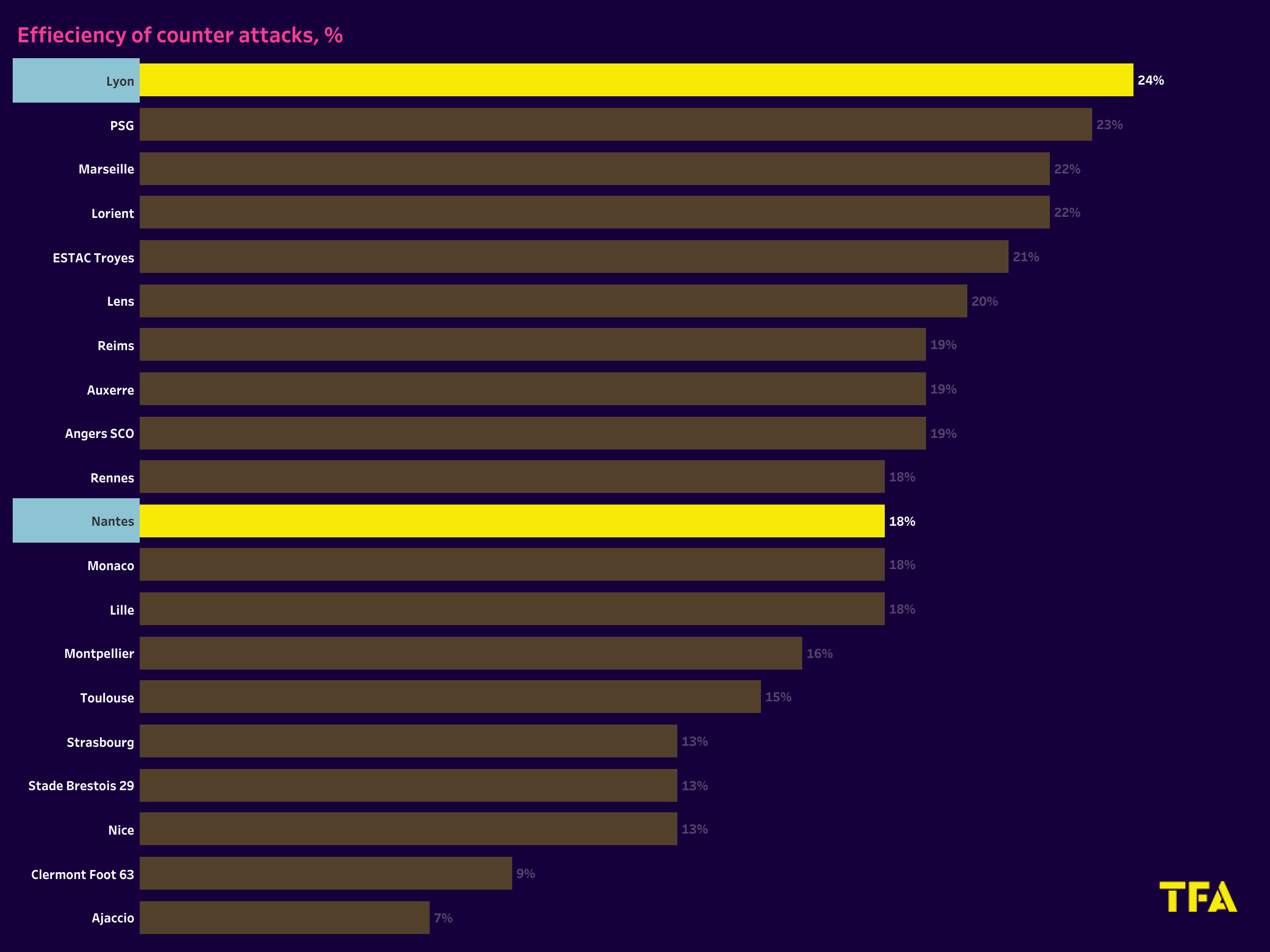 The above viz shows the defensive territory of the team. It indicates that Nantes are involved in a lot of defensive actions in the defensive third, and the team makes 41.06 interceptions per 90. They have committed numerous fouls in their half, including a few in the box, and average 12.24 fouls. The team makes 82.41 recoveries and attempts 208.51 duels on average with a win rate of 46.6 per cent. Defensively, they possess numbers that are similar to those of their opponents in the current season, but they still have work to do in the department of goals conceded on average, as they let in 1.44 goals as compared to their opponent’s 1.06 goals conceded per 90 minutes. 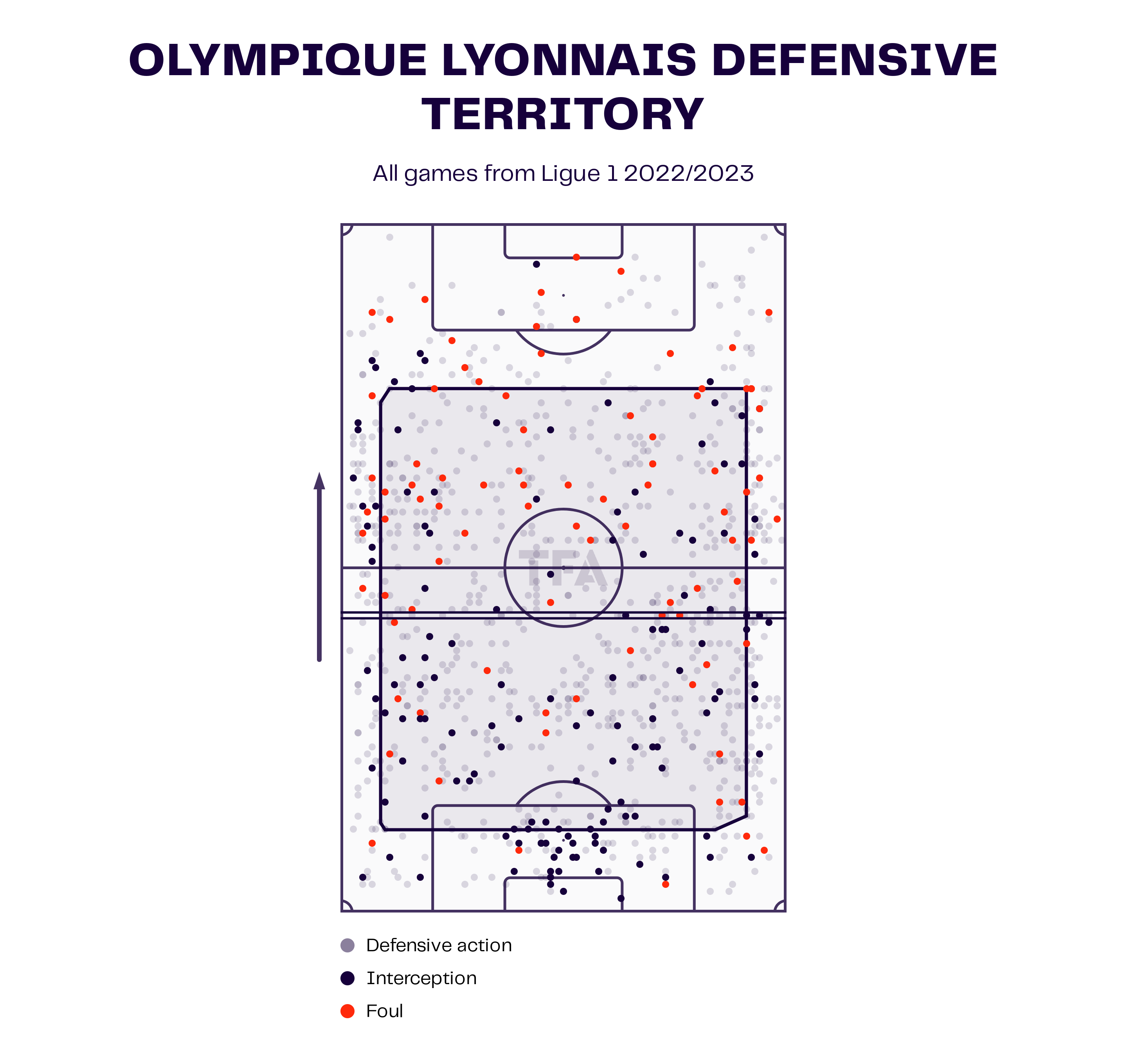 The above viz shows the defensive territory of the team. It indicates that Les Gones were involved in a lot of defensive actions in the defensive third. Lyon makes 39.53 interceptions per match. They have given up two fouls in the box and average 12.94 fouls per match. They play with a high backline. It can be seen that they have made many interceptions in the opponent’s half as well as 87.76 recoveries on average. Most of their defensive action happens in the defensive third and the middle third of the pitch, and they contest 210 duels per 90 with a success rate of 48.6%. Lyon are ranked fifth in Ligue 1 for overall pressing efficiency. 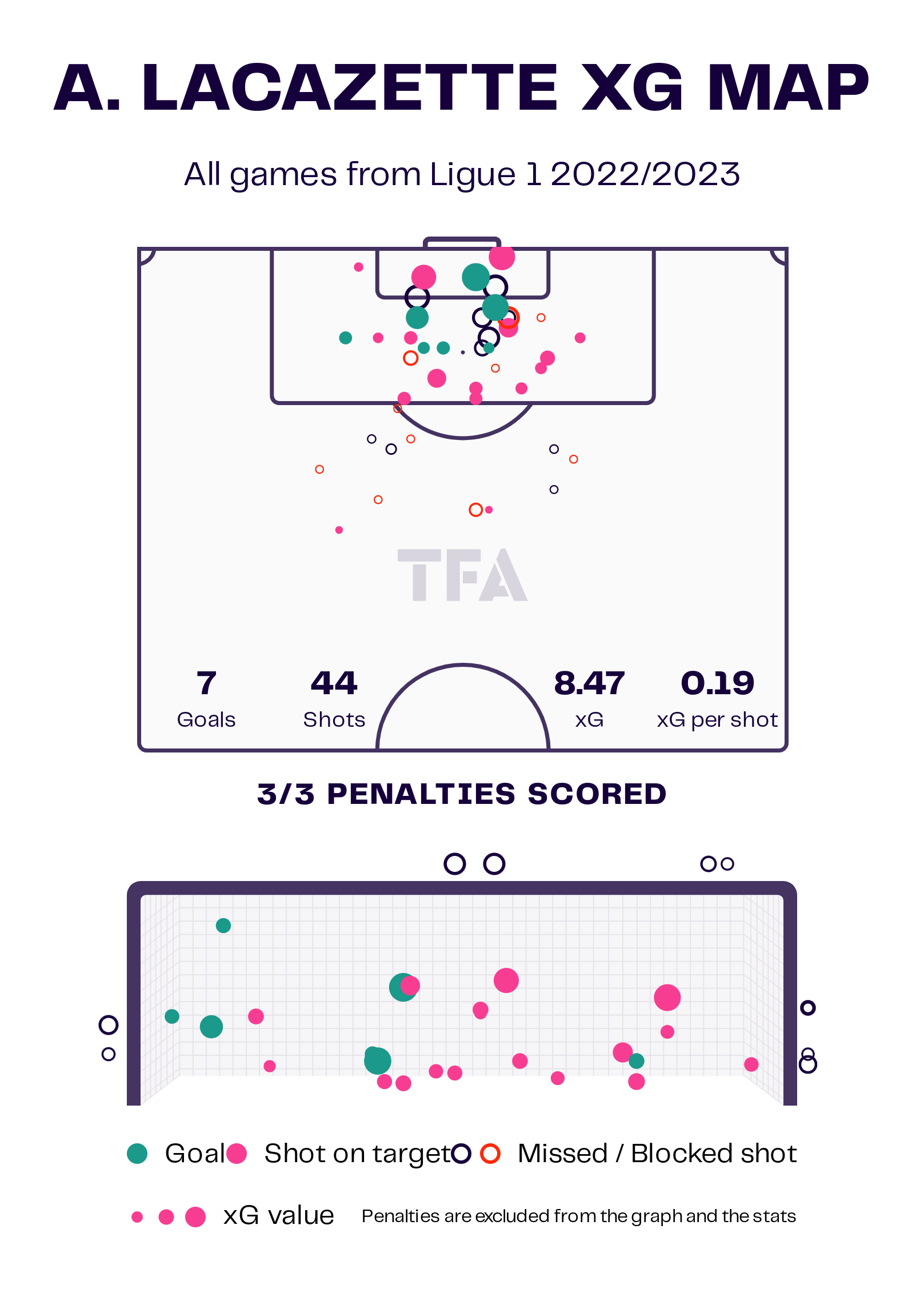 Lacazette is pumping goals for Lyon and is a crucial part of their attack. In the 2022–23 French Ligue 1 season, Alexandre Lacazette has played 17 matches. Lacazette has 26 shots on target from a total of 44 shots and has scored ten goals (9.50 xG). Alexandre Lacazette averages 26 passes per game, has a 73% pass completion rate, and four assists. All of his goals have come from inside and around the six-yard box, along with a few attempts on goal from outside the box.

After Nantes finally welcomed back Charles Traore following his long layoff with an ACL injury on Wednesday, the Mali international could be in contention to start again, though Quentin Merlin is the favourite to keep his place on the left flank if he overcomes an adductor issue.

For Lyon, Jerome Boateng and Henrique remain sidelined due to knee issues, Houssem Aouar has a muscle strain, and Malo Gusto is likely to miss another game because of a thigh injury.

Overall, the match will be an epic clash between the two teams. Lyon are the favourite in this game, and Nantes have the home advantage. It will be a test for Antoine Kombouaré’s men against Lyon, who will be looking to overcome their misery from their last Ligue 1 outing.

Transfer Analysis: What drives PSG to rival other European clubs for...