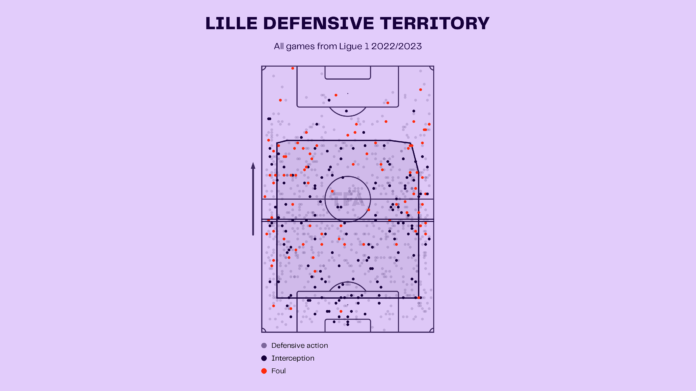 On May 23, 2021, with a win over Angers on the final day of the season, Lille were crowned Ligue 1 champions. The achievement was very surprising and was considered an upset, as Paris Saint-Germain had always been the favourites to win Ligue 1 for the fourth time in a row. Lille’s point total of 83 was the best in their history, and they only lost three matches all season. One season has passed, and Lille are in the middle of their second season since being crowned champions.

Lille have had a turbulent start to the Ligue 1 2022/23 seasons, they sit at 7th in the table after nine wins, three draws, and five losses. Last season was inevitably tough for Lille as they dealt with a new status, a changed team, a new coach, and the additional challenge of the Champions League. They were 11 points short of a European spot and reached the round of 16 in the Champions League. Currently, they sit three positions short of a Europa League spot, and there are four points between them. It will be exciting to see whether Lille manage to close the gap and catch up to the likes of Lens, who are playing impressively well this season. Below is an analysis of stats from Lille’s current and previous seasons in the French top flight.

How have Lille performed so far? 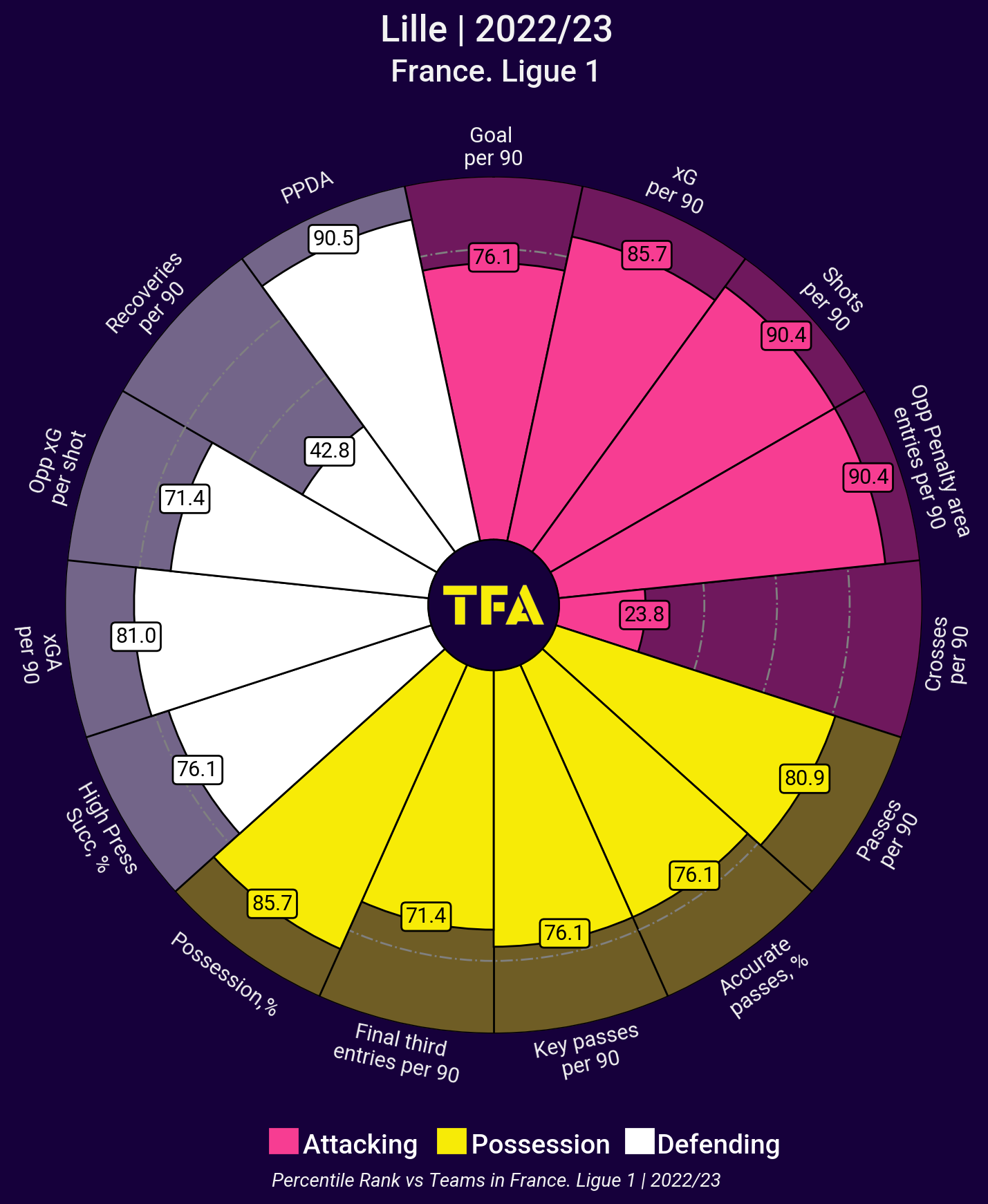 Lille have won two of their last five games, drawing two and losing one. They have scored five goals in their last five games and kept a clean sheet in only two of them. The above viz shows the percentile rank of Lille in attacking, defensive, and possession stats compared to other teams in Ligue 1. We can clearly observe that Lille are ranked at the top in attacking stats, especially for expected goals and shots per 90. They are also at the top for entries into the opposition’s penalty area per 90. Defensively, there is much room for improvement in their game in terms of high-pressure success rate and recoveries per 90. It is worth noting that Lille won the French championship in 2020/21 thanks, in large part, to their outstanding defensive record.

Lille in attack at present 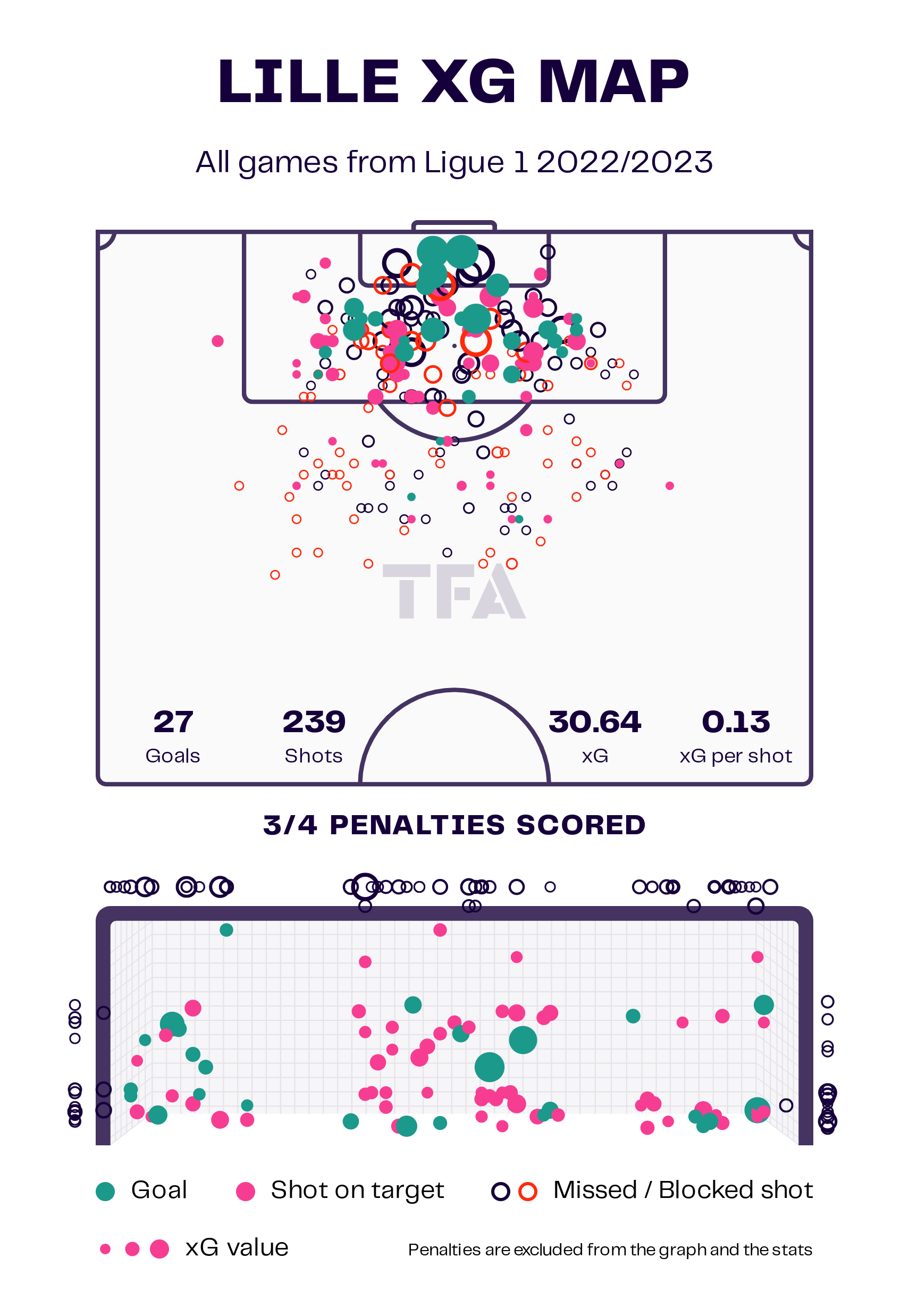 Lille are currently in seventh place in the 2022–23 French Ligue 1, with 30 points from 17 matches played. They have scored 30 goals (30.64 xG) and conceded 24 goals (20.2 xGA). Lille have scored most of their goals from around the six-yard box. They have also managed to take quite a few shots on target from outside the box. Lille are successful in taking shots from hazardous locations inside the penalty box, which raises their xG. Lille have an average xG of 1.98 this season and an average of 36% shot accuracy, taking 14.29 shots per 90 minutes. 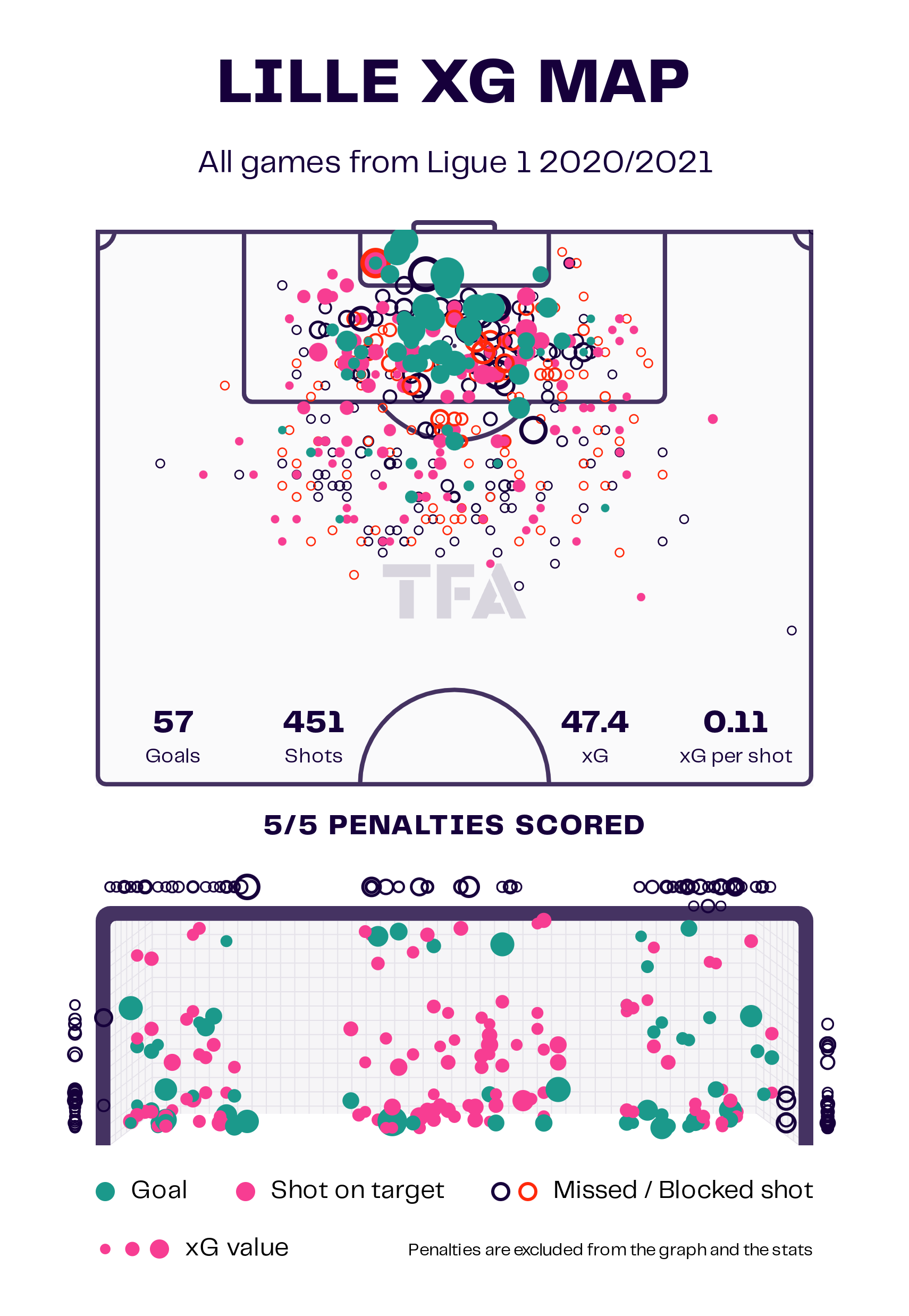 In their league-winning campaign, Lille scored a total of 64 goals and conceded a mere 23. The team finished their season with an average xG of 1.35 and a shot accuracy of 39.7%, averaging 12 shots per 90 minutes for their 2020/21 campaign. The team scored most of their goals from inside the box. It can be observed that Lille have already conceded more goals in fewer matches this season. Therefore, Lille’s crowning moment was largely due to the team’s efforts in defence. 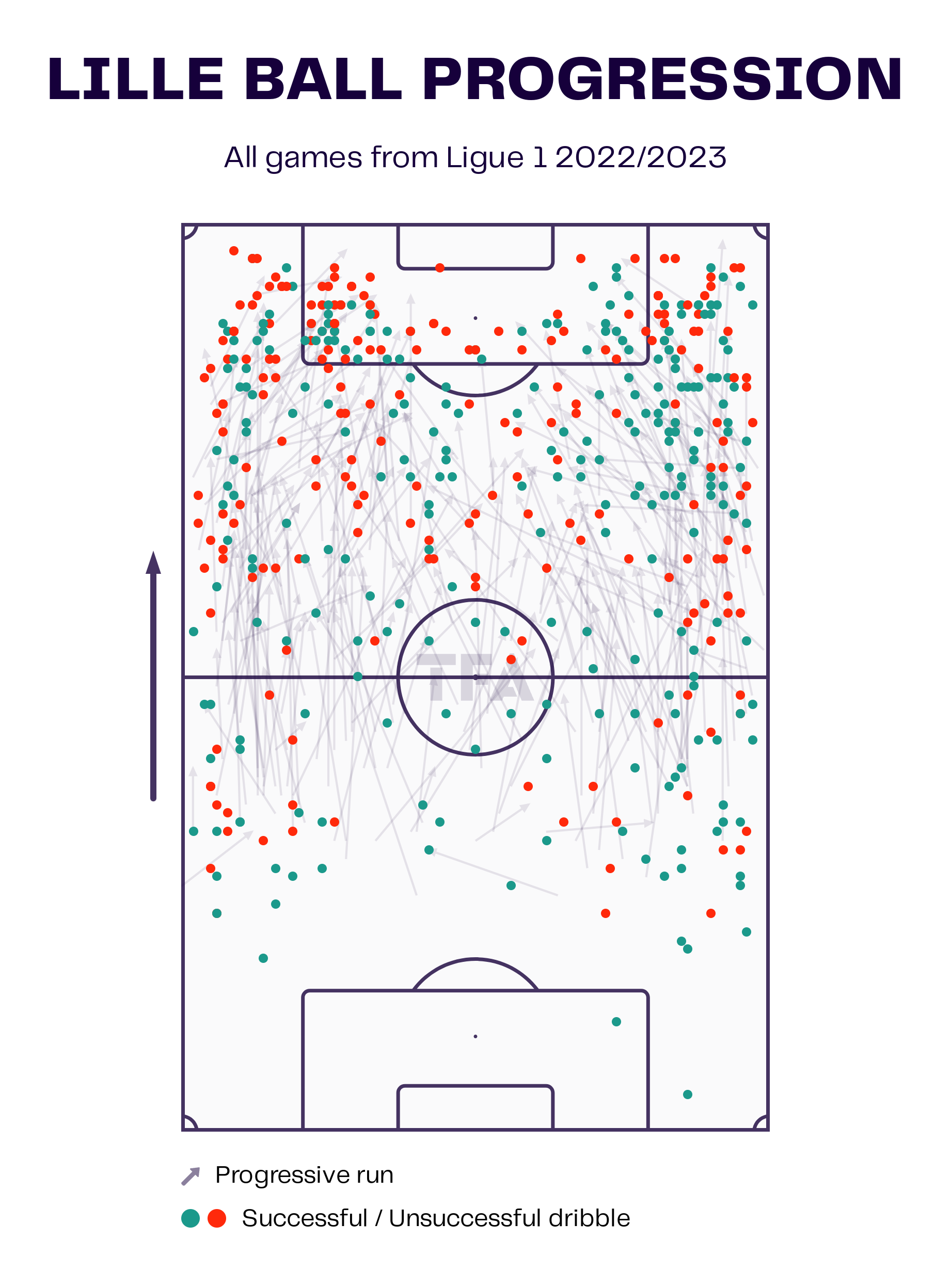 Like most teams nowadays, Lille likes to play out from the back. This is done in an attempt to lure an opposition press so that Lille can exploit the space left behind the pressing players and allow them to move the ball forward centrally. If Lille cannot play centrally, they will build up in the wide areas, which can be seen in the above map for Lille’s ball progression in Ligue 1 2022/23. Lille are currently making 2.47 counterattacks per 90, with 50.2% of them ending in shots. They perform 31.47 positional attacks per 90, with 26% ending in shots. Additionally, they make 69.59 progressive passes per 90 with 74.59% accuracy. As seen below, much of Lille’s attacking strategies were defined during their league-winning season. 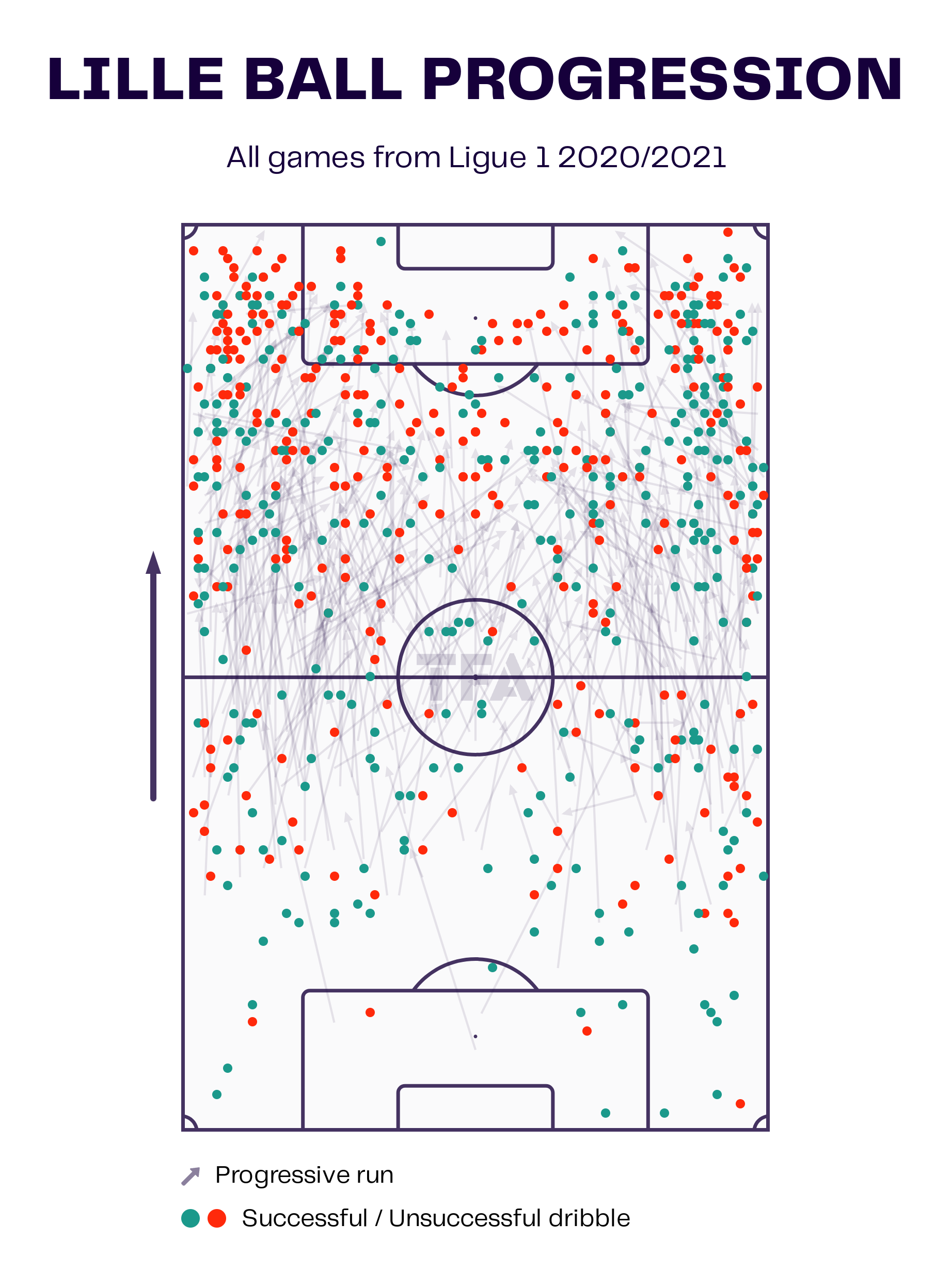 The structure Lille used to advance the ball up the pitch during their championship season is shown above. In it, the fullbacks and wingers remain in their wide areas, often isolating the opponent’s wide defenders. They then looked for spaces to move the ball into, create attacking danger, and maintain possession. In terms of attack, Lille created 32.13 positional attacks per 90, with 24.4% ending in shots. The team was also making 4.29 counterattacks per 90, with 39.9% of them ending in shots. Additionally, they made 77.71 progressive passes per 90 with 78.8% accuracy in the 2020/21 Ligue 1 season.

Lille in defence this season 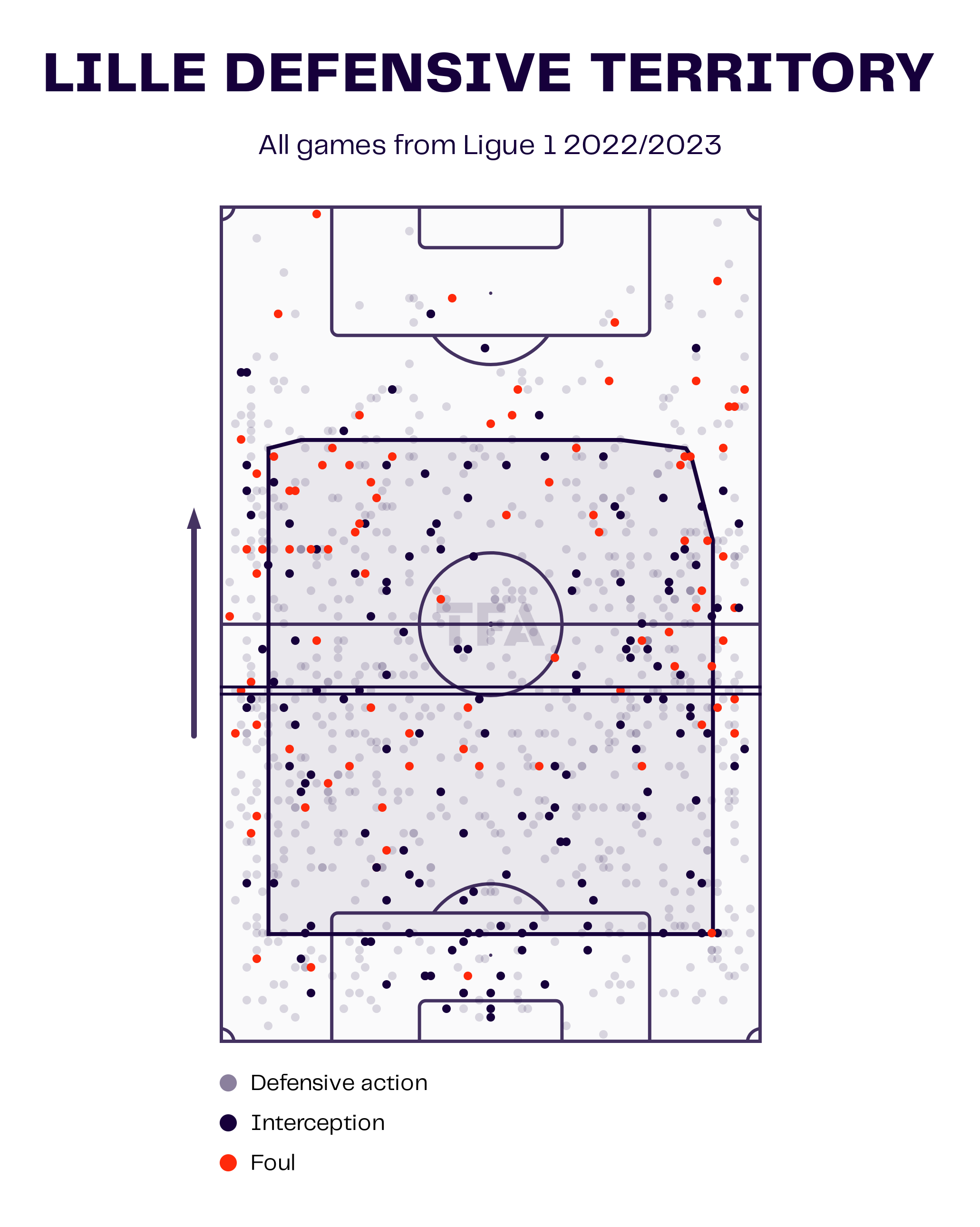 The graph above depicts the stats for Lille’s defensive territory in Ligue 1 in 2022/23. They average 39.41 interceptions per 90. It indicates that Lille are involved in a lot of defensive actions in the defensive third. The team gives up 13.88 fouls on average and wins 58.5% of their defensive duels. The team concedes 1.41 goals on average, which is one of the reasons behind Lille’s downfall at defence. 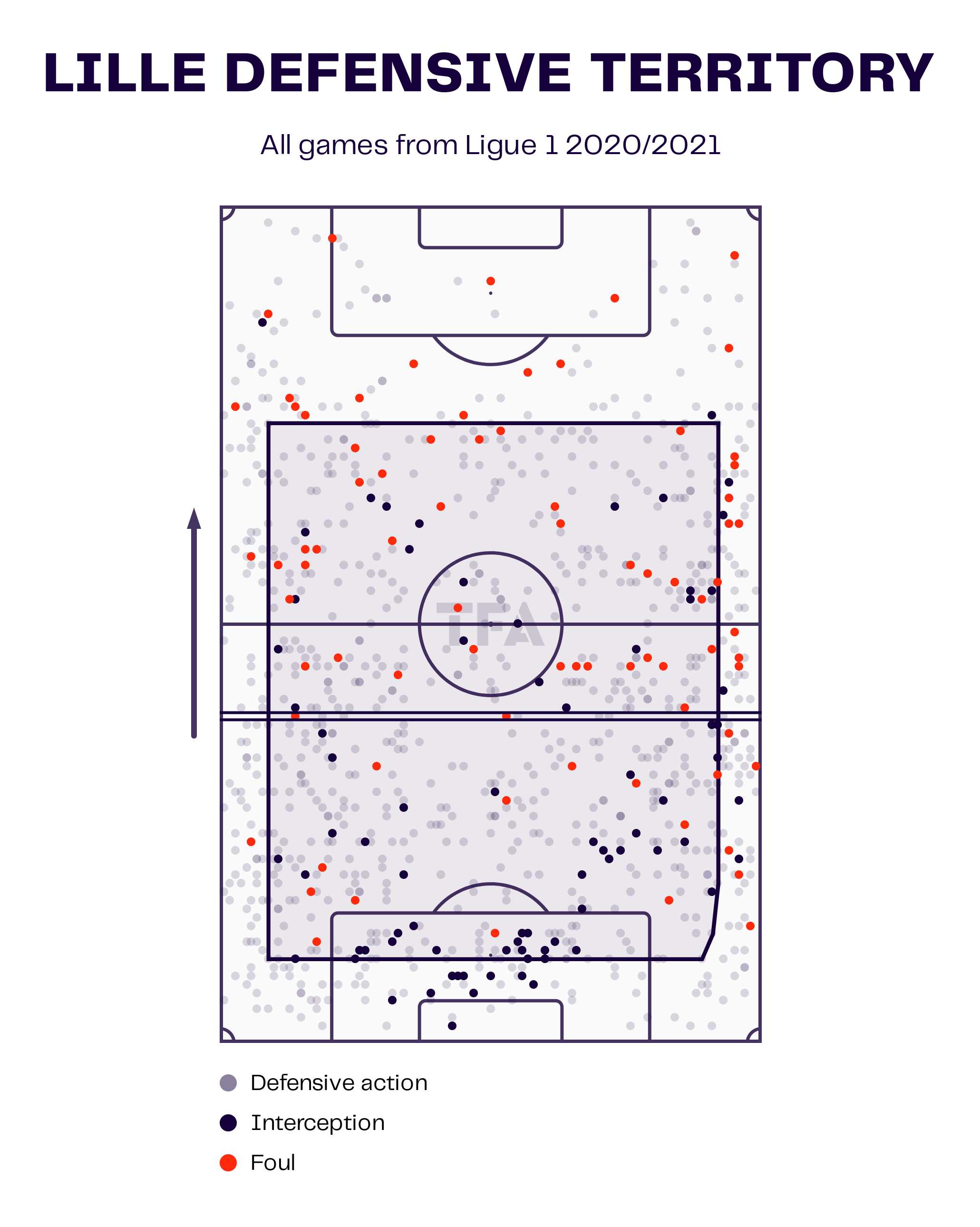 When defending, Lille played incredibly narrowly in the 2020–21 season. This was done in order to prevent the opposition from using central passing options. However, it also allowed Lille to counter-attack with pace and fluidity when they won the ball back. The graph above depicts the stats for Lille’s defensive territory in that season. They averaged 42.4 interceptions per 90 and gave away 12.76 fouls on average. They won 60.2% of their defensive duels and finished their campaign conceding a mere 0.61 goals on average, which saw them lift the trophy.

In the end, the Lille team that was crowned champions was special. It was full of exciting players who played under a great manager and coach, who earned his way into managing the current PSG team. Each player contributed significantly to Lille’s Ligue 1 title in 2020/21. Rolling down a season and a half, Lille are seeing their defence broken easily and are managing to create a decent attacking threat. It seems like Lens have taken over their spot this season and have similar numbers to Lille’s winning campaign in terms of goals conceded. There is a long way to go before the 2022–23 champion is decided and spots in Europe are allotted. Lille will look to redeem themselves before the season is over and grab one of the desired positions in the Ligue 1 standings.