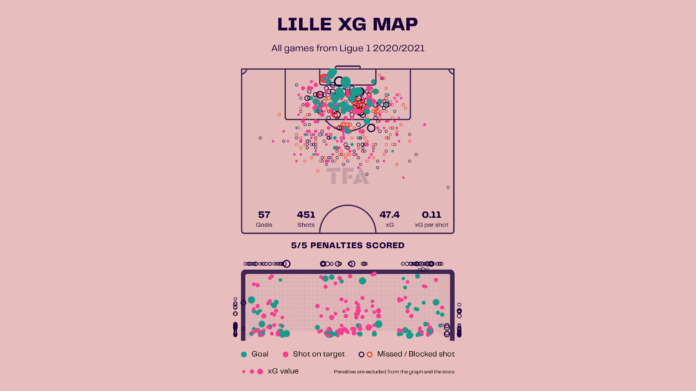 Lille have had a turbulent start to the Ligue 1 2022/23 season, they sit at 7th in the table after eight wins, two draws, and five losses. Last season was inevitably tough for Lille as they dealt with a new status, a changed team, a new coach, and the additional challenge of the Champions League. Lille finished 10th on the table last year with a total of 55 points. They were 11 points short of a European spot and reached the round of 16 in the Champions League. Currently, they sit three positions short of a Europa League spot, and there are four points between them. It will be exciting to see whether Lille manage to close the gap and catch up to the likes of Lens, who are playing impressively well this season. Below is an analysis of stats representing Lille’s performance in the Ligue 1 2022/23 season so far.

How have Lille performed so far? 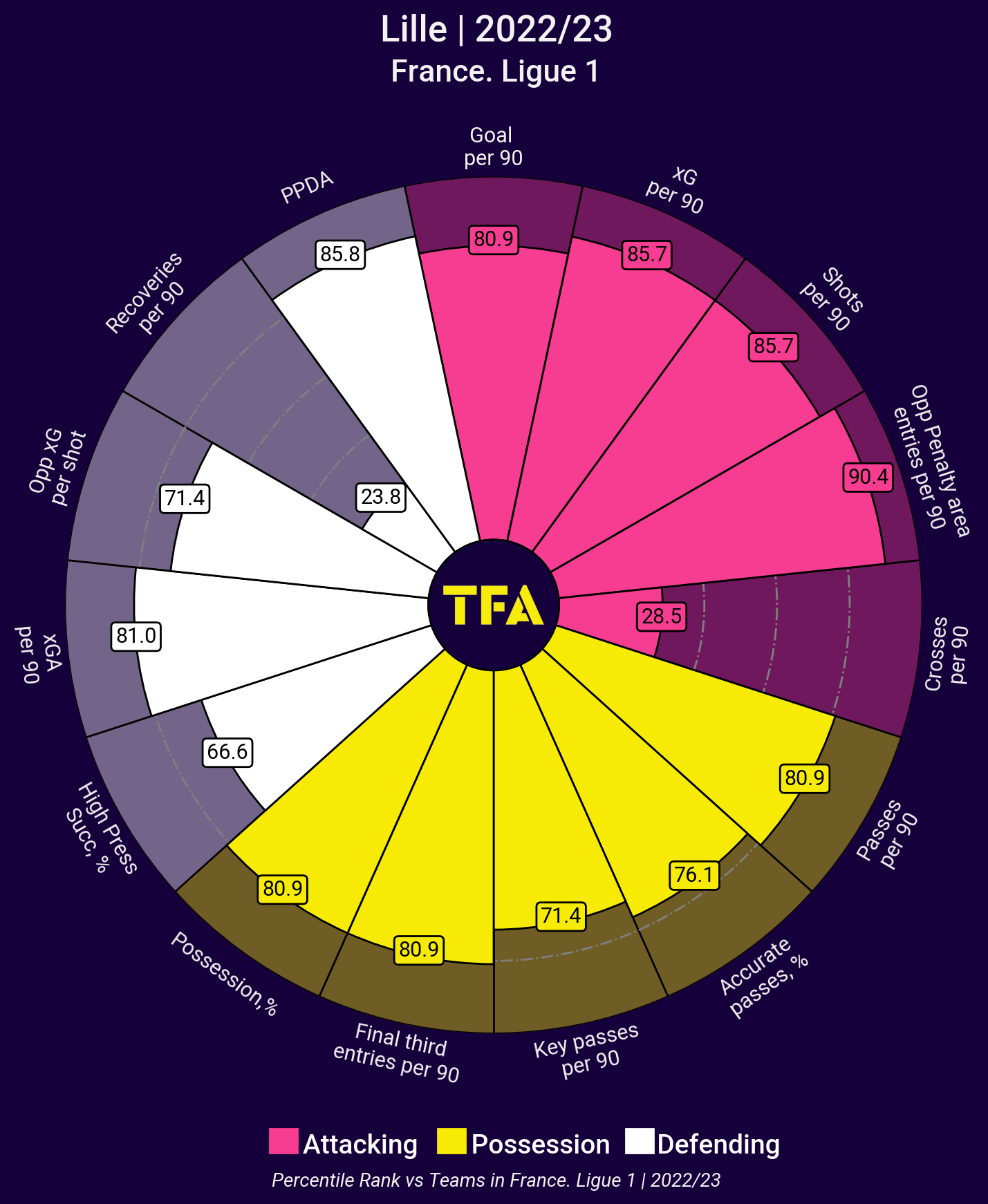 Lille have won three of their last five games, drawing one and losing one. They have scored six goals in their last five games and kept a clean sheet in only one of them. The above viz shows the percentile rank of Lille in attacking, defensive, and possession stats compared to other teams in Ligue 1. We can clearly observe that Lille are ranked at the top in attacking stats, especially for expected goals and shots per 90. They are also at the top for entries into the opposition’s penalty area per 90. Defensively, there is much room for improvement in their game in terms of high-pressure success rate and recoveries per 90. 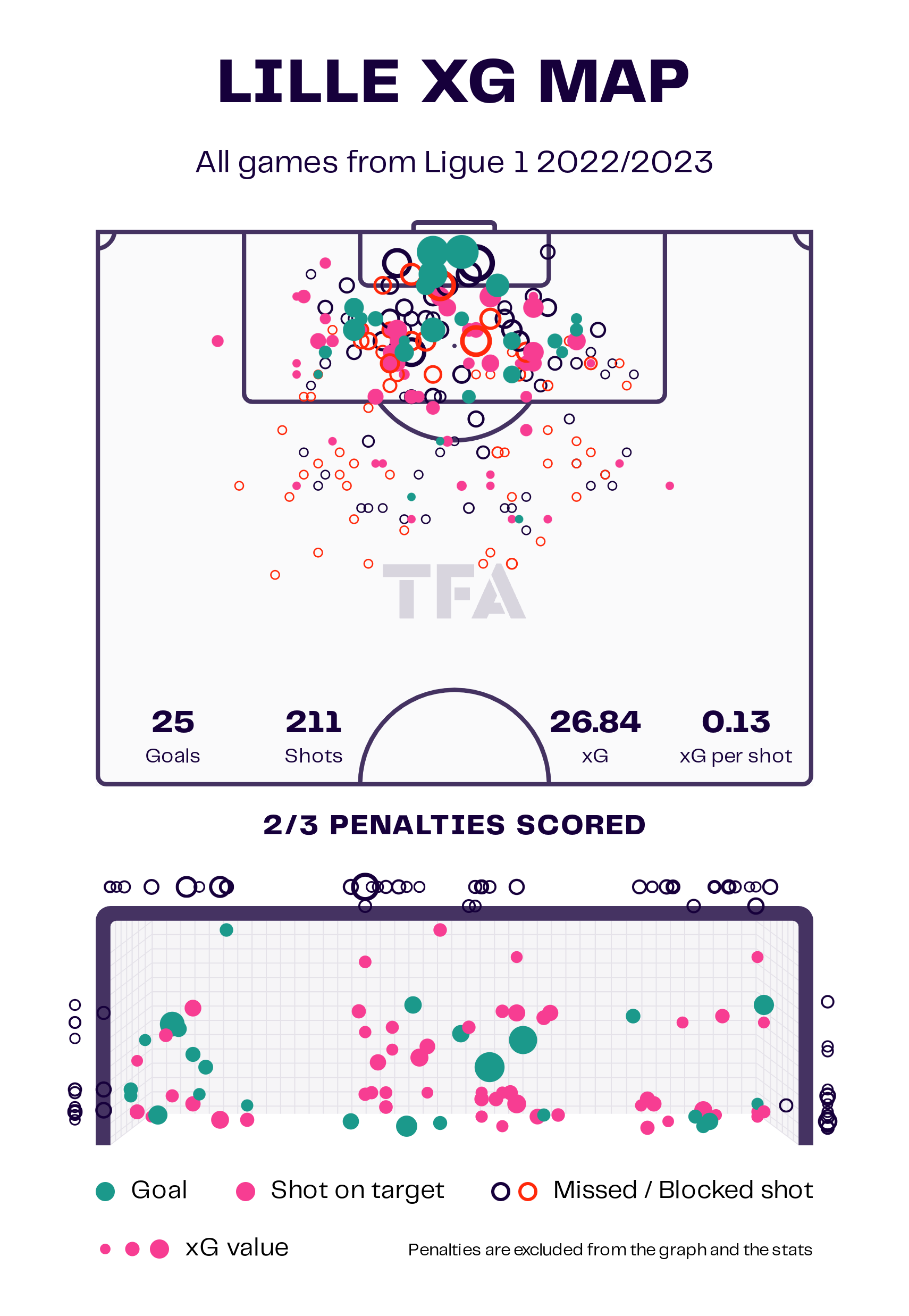 Lille are currently in 7th place in the 2022–23 French Ligue 1, with 26 points from 15 matches played. They have won eight matches, drawn two, and lost five. They have scored 25 goals (26.8 expected goals (xG)) and conceded 23 goals (18.7 expected goals against (xGA)). Lille have scored most of their goals from around the six-yard box. They have also managed to take quite a few shots on target from outside the box. Lille are successful in taking shots from hazardous locations inside the penalty box, which raises their xG. 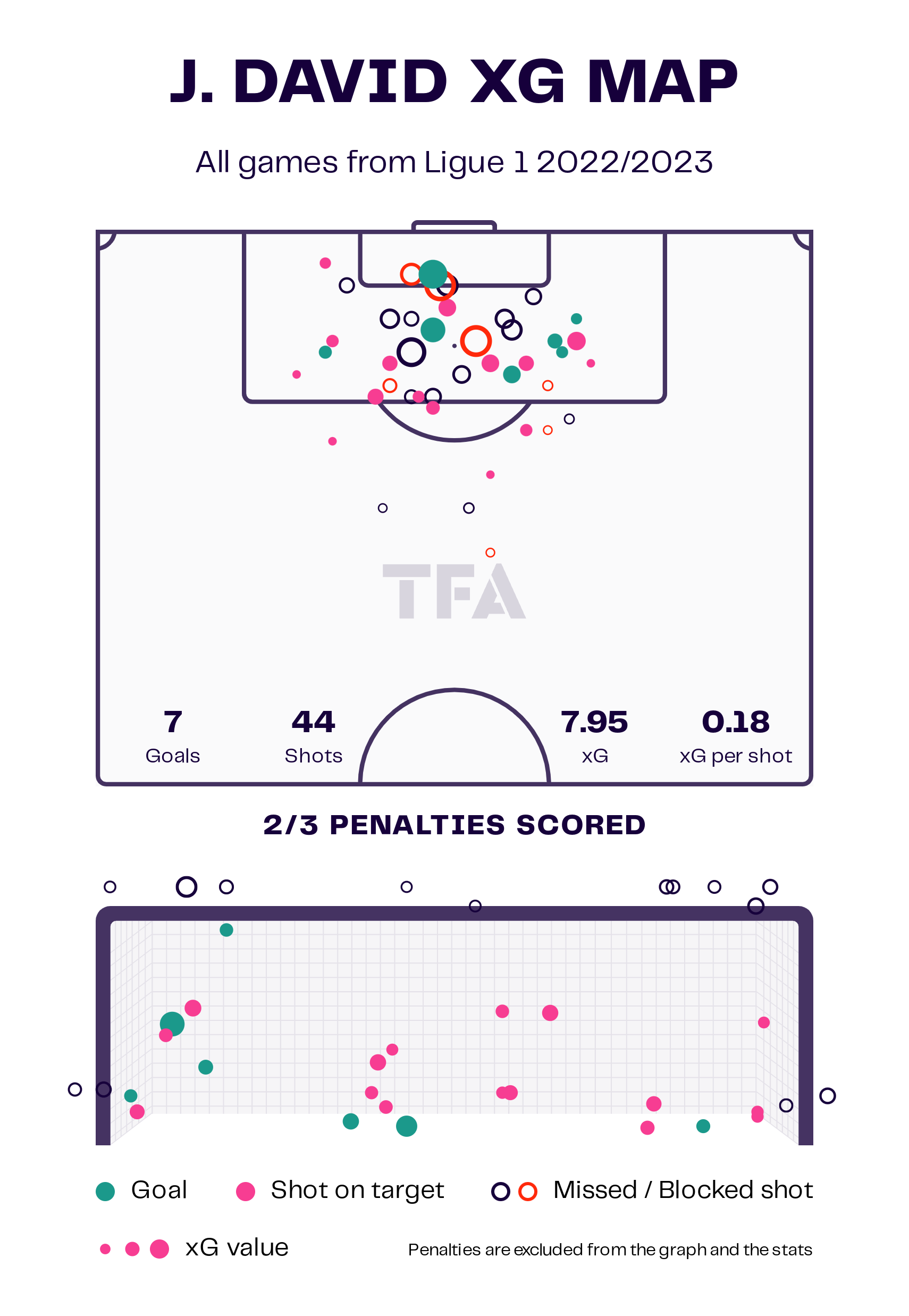 One of the players performing well in attack for Lille is Jonathan David. The above viz shows the stats for expected goals. In Ligue 1, he has scored seven goals from 44 shots attempted. Jonathan is helping Lille bag the necessary goals and has an xG of 7.95 next to a 0.18 xG per shot. All of his goals have come from inside the box. He has scored two out of three penalties taken, and most of his attempts at goal are in and around the six-yard box. 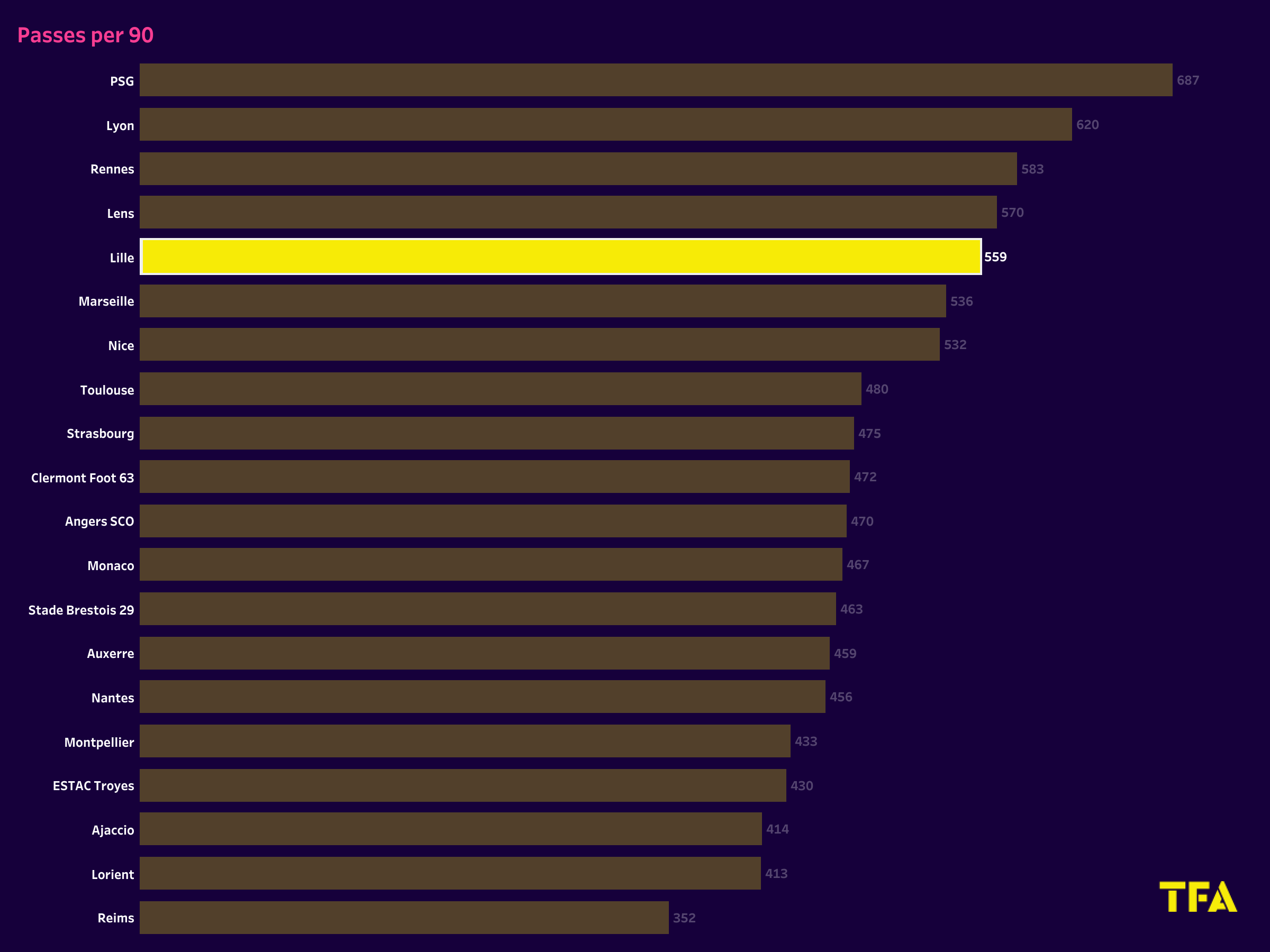 Lille is fifth in Ligue 1 in terms of total passes per 90 minutes in 2022/23. This highlights their intent to play with the ball and maintain possession. It also speaks of how Lille looks at building play and building from the back. PSG, Lens, and Rennes are first, second, and third, respectively, in Ligue 1. where Lyon is just below Lille in the table at number eight. 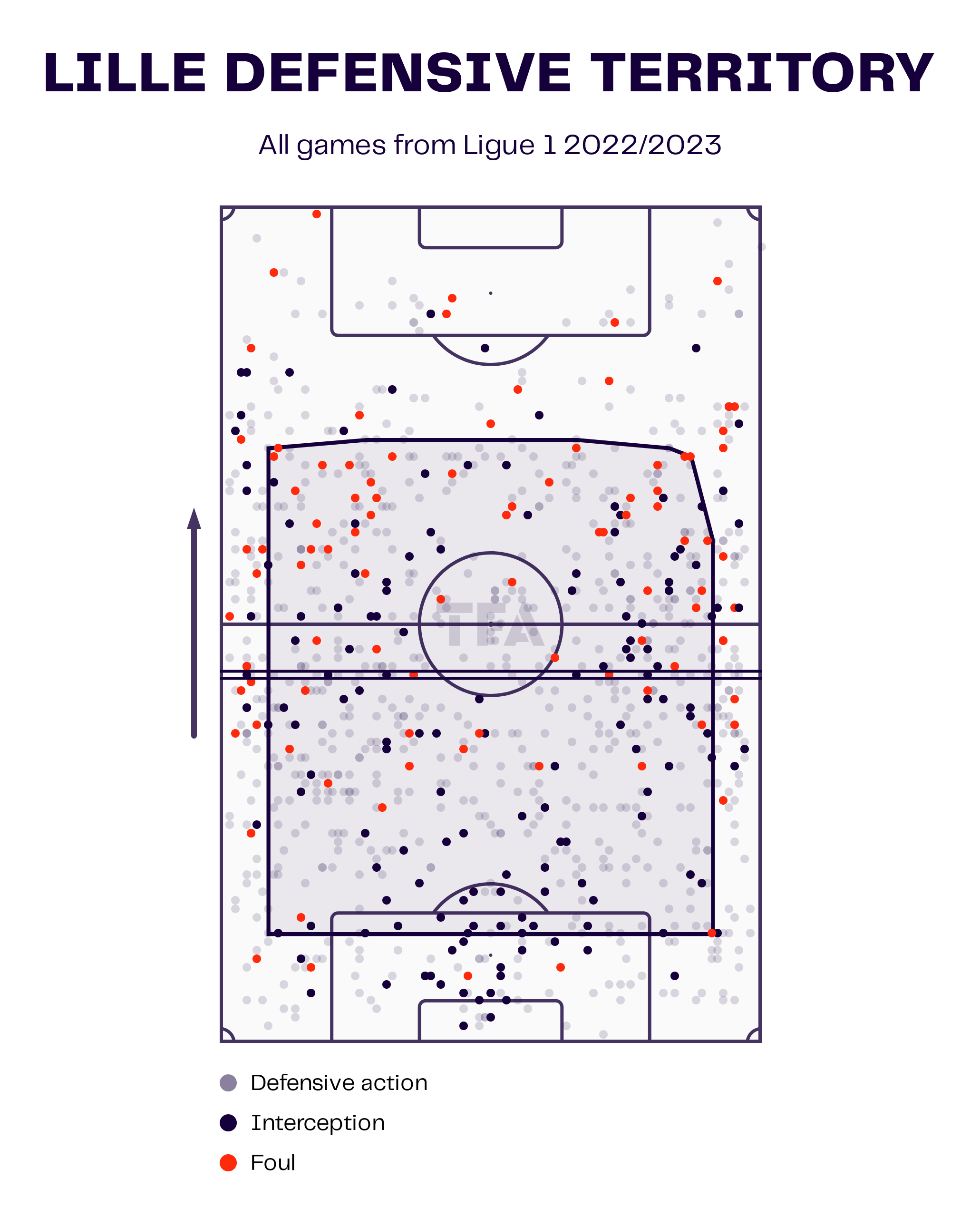 The graph above depicts the stats for Lille’s defensive territory in Ligue 1 in 2022/23. Lille have conceded 23 goals so far in the Ligue 1 2022/23 season. They average 42 interceptions per 90. The above viz depicts the team’s defensive territory during the 2022–23 Ligue 1 season. One of the key things that can be observed is that the French side have a high defensive line. They have given up two fouls in the box, which may have cost them a bit. Lille are ranked at the bottom in terms of interceptions per 90, which shows their intent to maintain possession during the game. 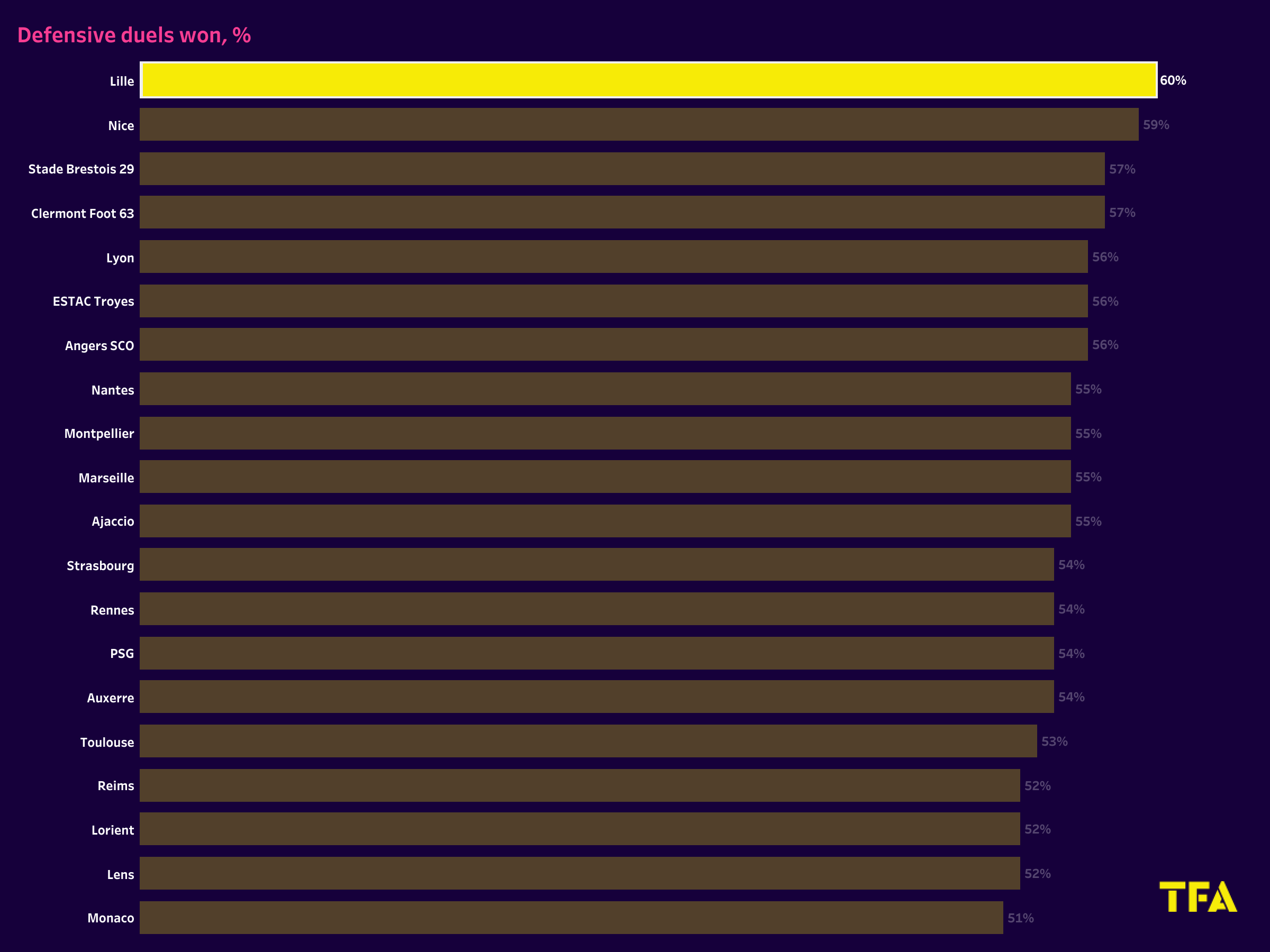 The above viz is a collection of stats showing Lille’s percentage of defensive duels won. The French side is in the best of books, with 60 percent of defensive duels won in the Ligue 1 2022–23 season. Overall, Lille has conceded a total of 24 goals this season in Ligue 1. Lille concedes a goal every 59 minutes and concedes an average of 1.53 goals per game.

Lille players with the ball 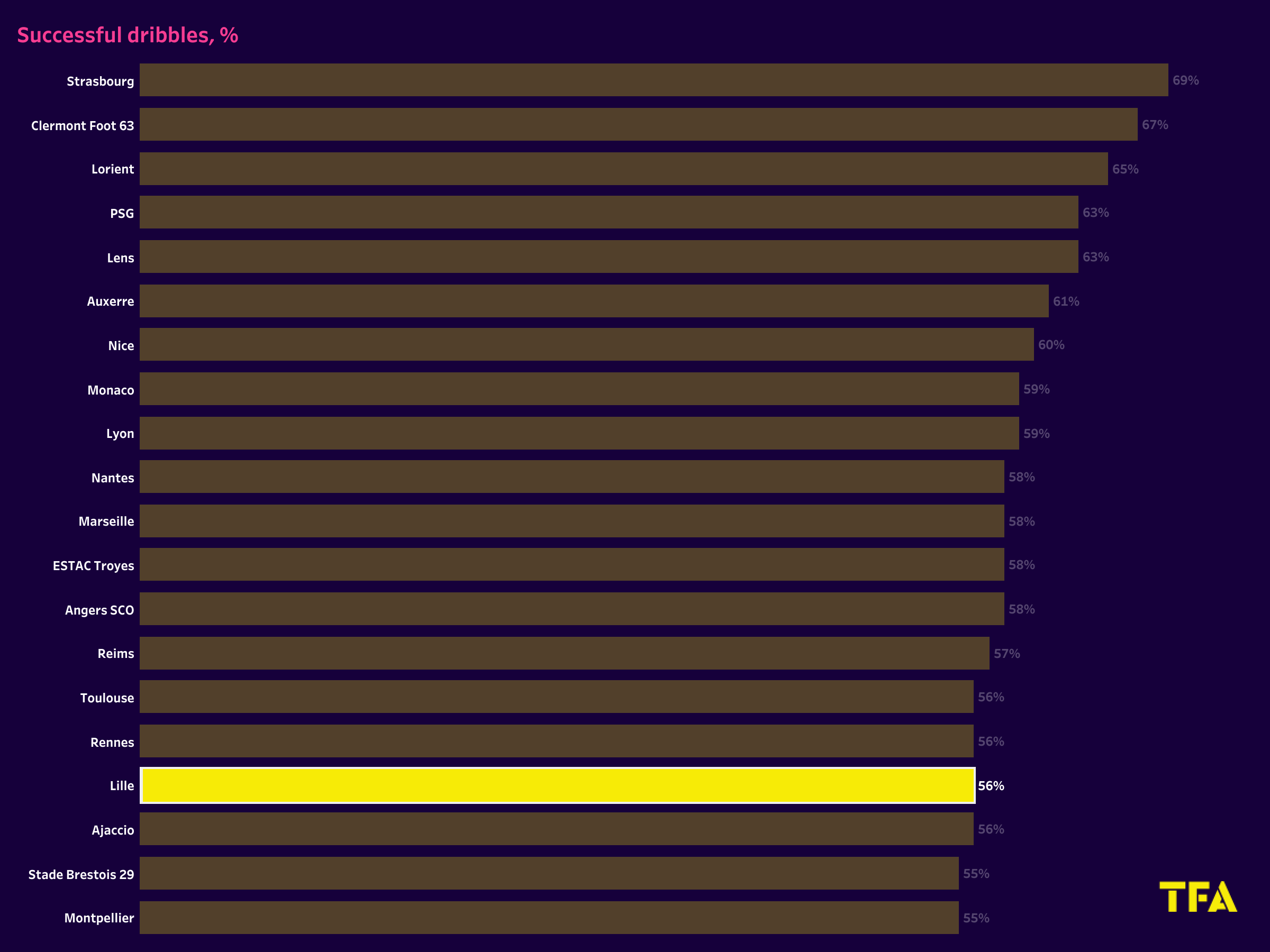 The above viz shows the percentage of successful dribbles for all teams playing in Ligue 1 in 2022/23. It can be observed that Lille are not in the best spot and are struggling in their attempts at successful dribbles. More failed attempts equals more possession loss for Lille during games. Since they are a possession-based team, looking at their total number of passes, Lille cannot lose possession of the ball due to unsuccessful dribble attempts. There is an indication of a silly loss of possession. This means that Lille is not in the best position at the moment and needs to display more assertive gameplay.

This season began with André scoring Lille’s first goal of the season within one minute of kick-off. Lille have recovered from a shaky start to reach the mid-season break in seventh place, which doesn’t reflect the quality of Lille’s football. It will be interesting to see if Lille can push this season to compete with the likes of Lens in the second half of the Ligue 1 2022–23 season and maybe try to grab the second spot or even capitalise on slip-ups from the big teams, if any.

Under the microscope: How are Lyon facing a downfall in Ligue...