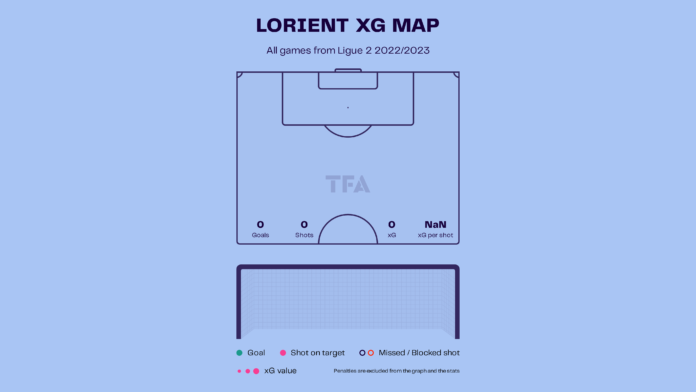 Few expected Lorient to enjoy such an impressive start to the campaign. Lorient’s start has been remarkable in the 2022–23 Ligue 1 season. Lorient’s form is good overall, with eight wins, four draws, and three losses. This performance currently places Lorient fifth in the Ligue 1 standings. It is a remarkable performance for a club that won just eight times in the whole of last season and finished the season in 16th place, only four points clear of the relegation zone. Lorient, a French Ligue 1 club, named reserve team boss Regis Le Bris as their new manager this season. Let’s now look at the stats behind Lorient’s impressive season so far and what’s keeping them in the battle for a spot in Europe this season.

How Lorient are performing this season 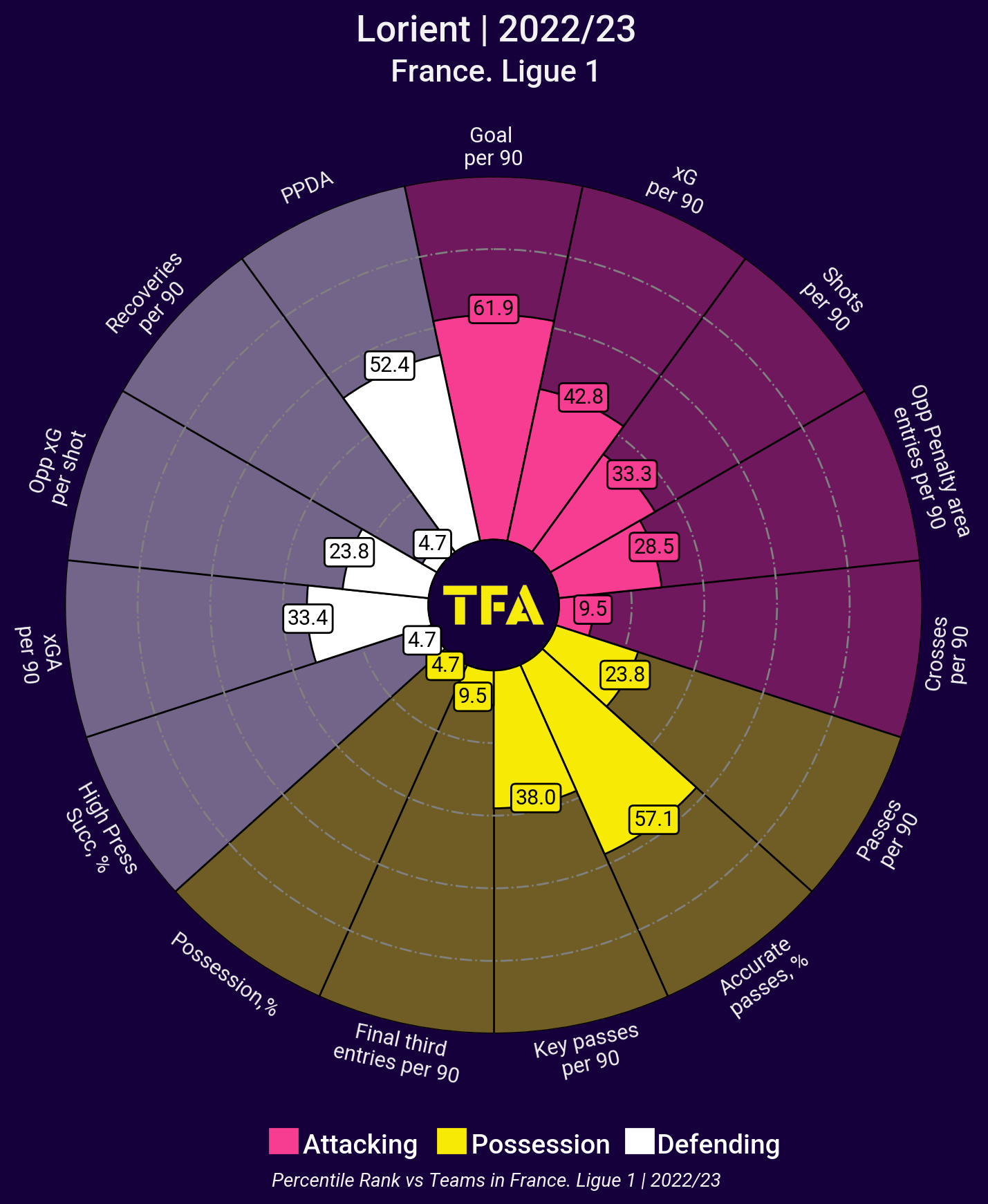 Lorient started the season in top form. For a large portion of the season, they looked like the team that could challenge PSG for the championship. However, they have since lost a bit of ground. The above viz shows the percentile rank of the team in attacking, defensive, and possession stats compared to other teams in Ligue 1. It can be observed that the stats for Lorient are not as eye-catching as they may seem given that they stand fifth in the league. They are performing fairly decently with respect to goals per 90. Defensively, they are not the best either; in terms of recoveries per 90 minutes, they are one of the lowest-ranked teams in Ligue 1. 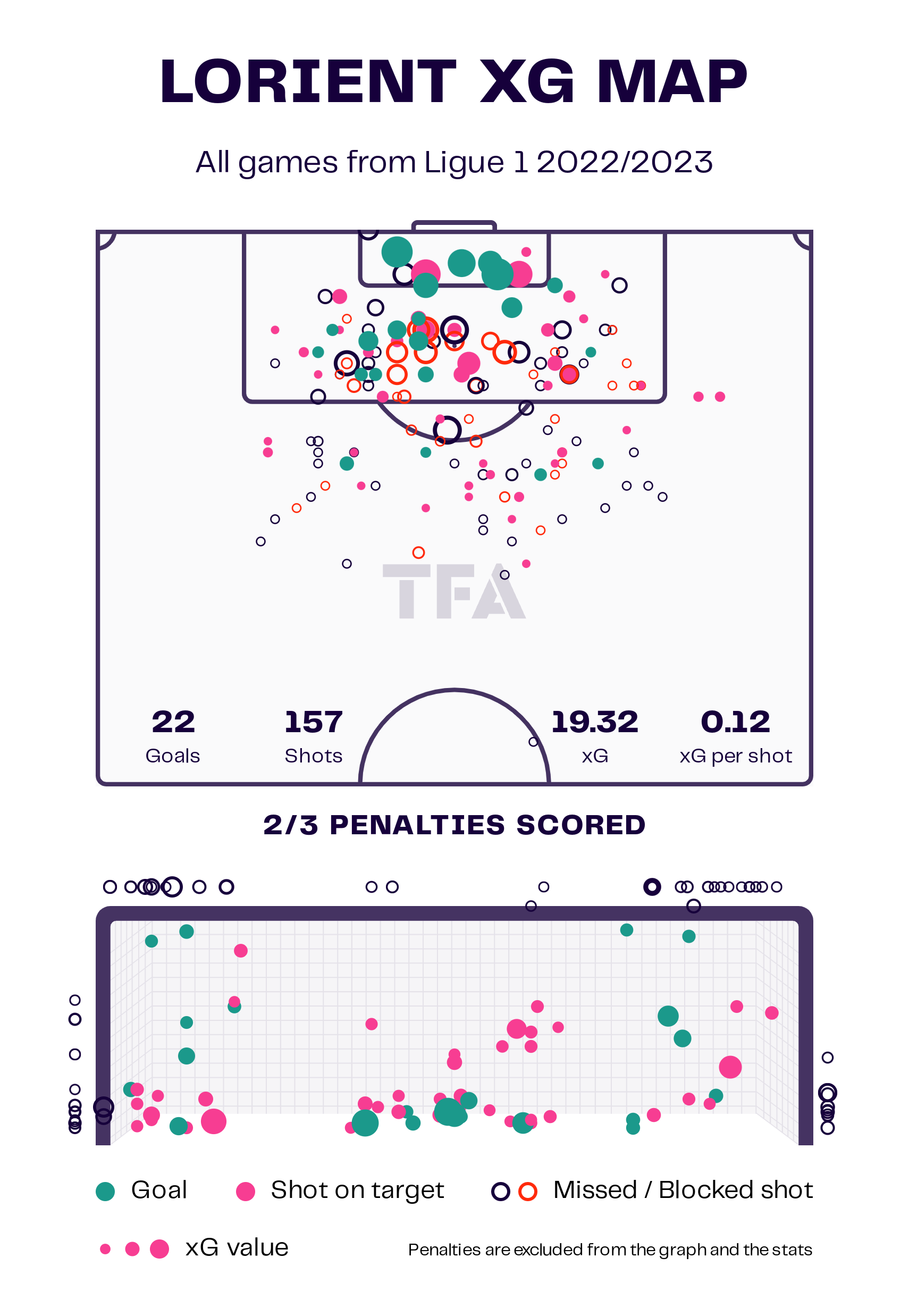 Lorient are currently in fifth place in the 2022–23 French Ligue 1, with 28 points from 15 matches played. They have won eight matches, drawn four, and lost three. They have scored 26 goals (19.3 expected goals (xG)) and conceded 21 goals (22.5 expected goals against (xGA)). Lorient have scored most of their goals from around the six-yard box. They have also managed to take quite a few shots on target from outside the box. 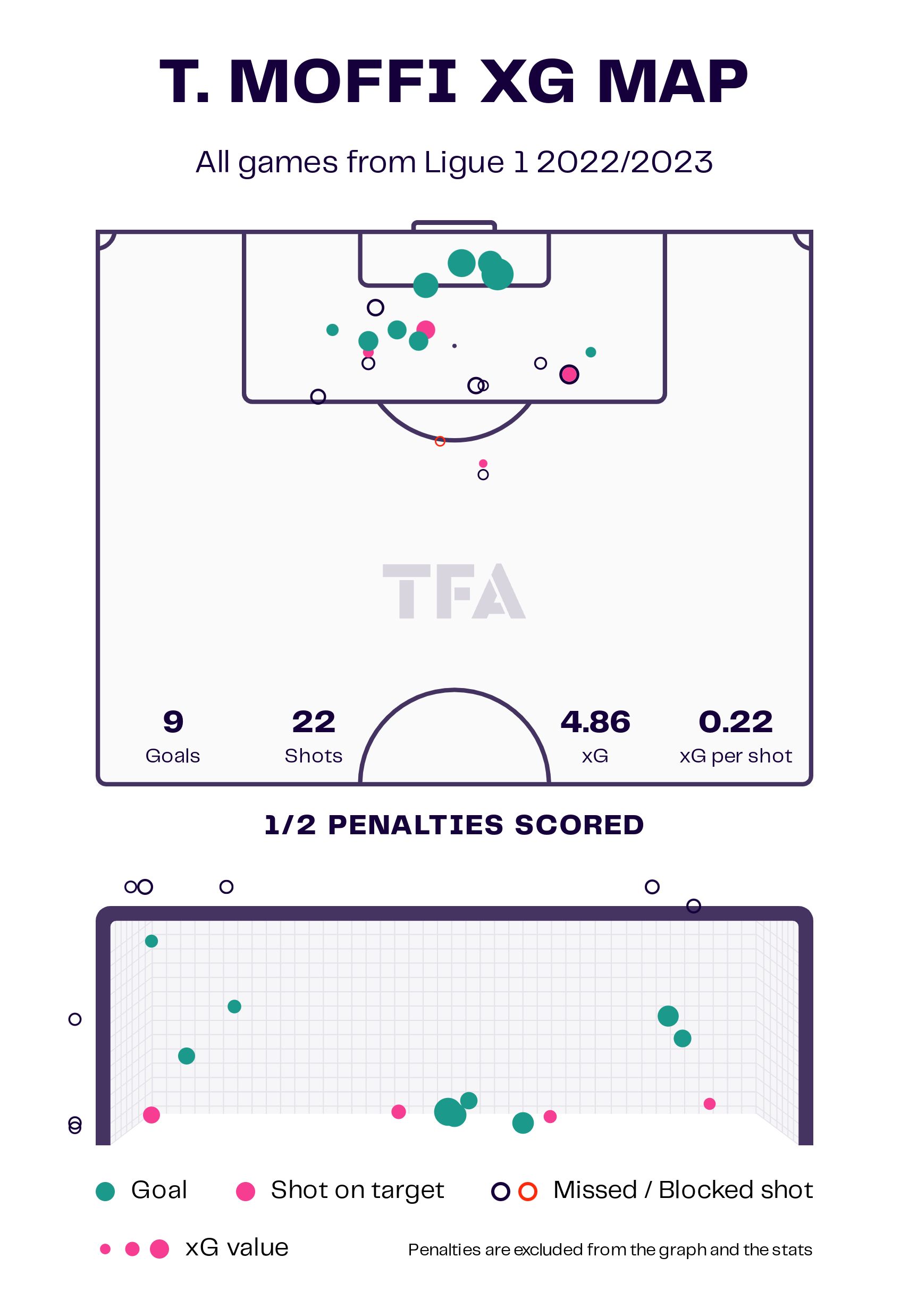 One of the players performing well in attack for Lorient is Nigerian international Terem Moffi. He has scored ten goals for Lorient this season. In Ligue 1, he has scored nine goals from 22 shots attempted. Terem Moffi is helping Lorient bag the necessary goals and has an xG of 4.86 next to a 0.22 xG per shot. All of his goals have come from inside the box. 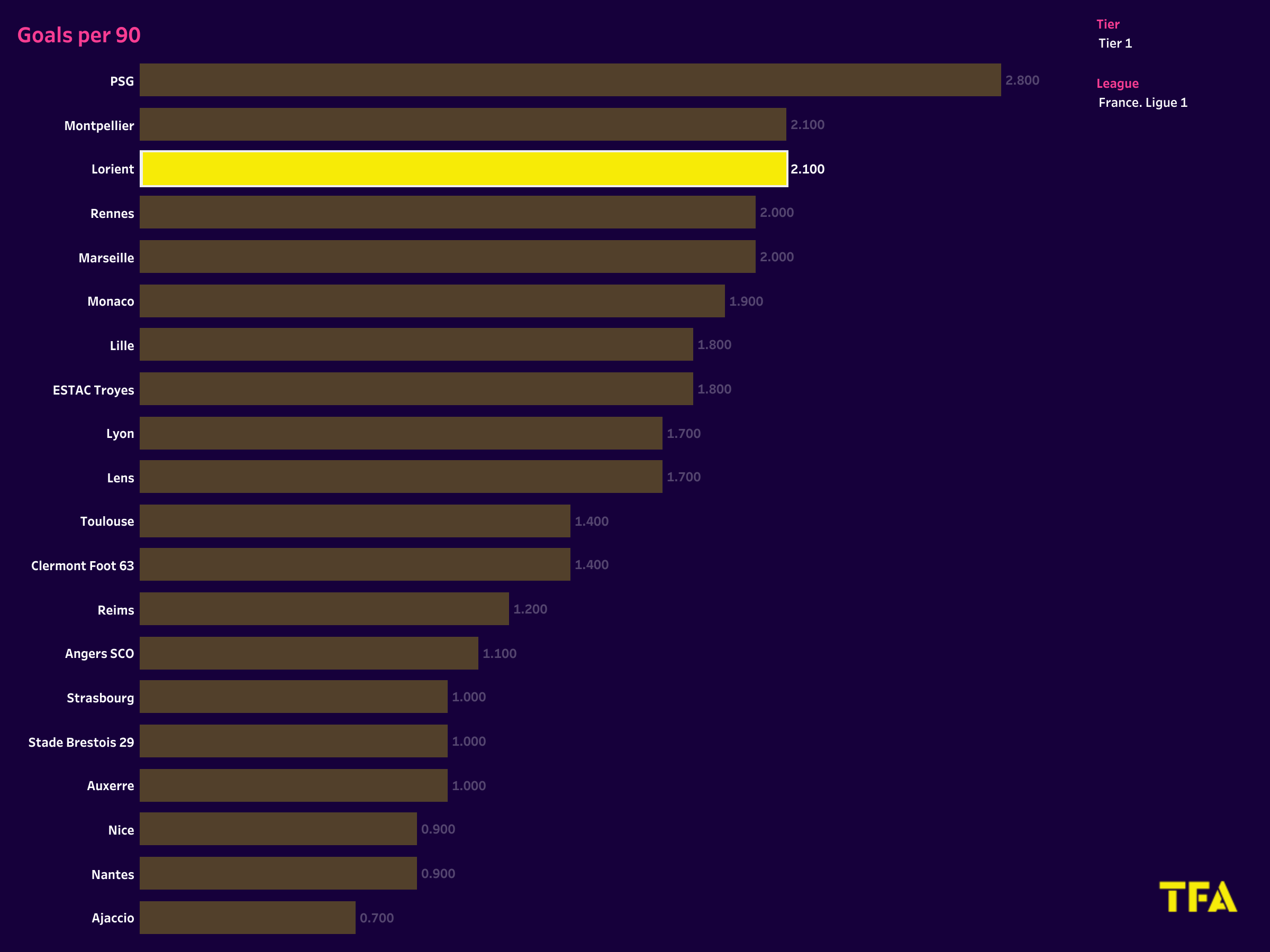 Lorient are among the top three teams in Ligue 1 for the most goals per 90 as well as the most dribbles per 90. Lorient have an xG per 90 of 1.57, which is among the top ten teams in Ligue 1. In terms of goals per 90, they are at 2.1 per match, which is a good sign considering they are looking to grab a spot in the top four. Dribbles are an important aspect of the game and can help carry the ball forward. Lorient are completing 29 dribbles per 90 compared to PSG’s 35. The intent is clear, and Lorient are clearly pushing this season in order to make a mark. 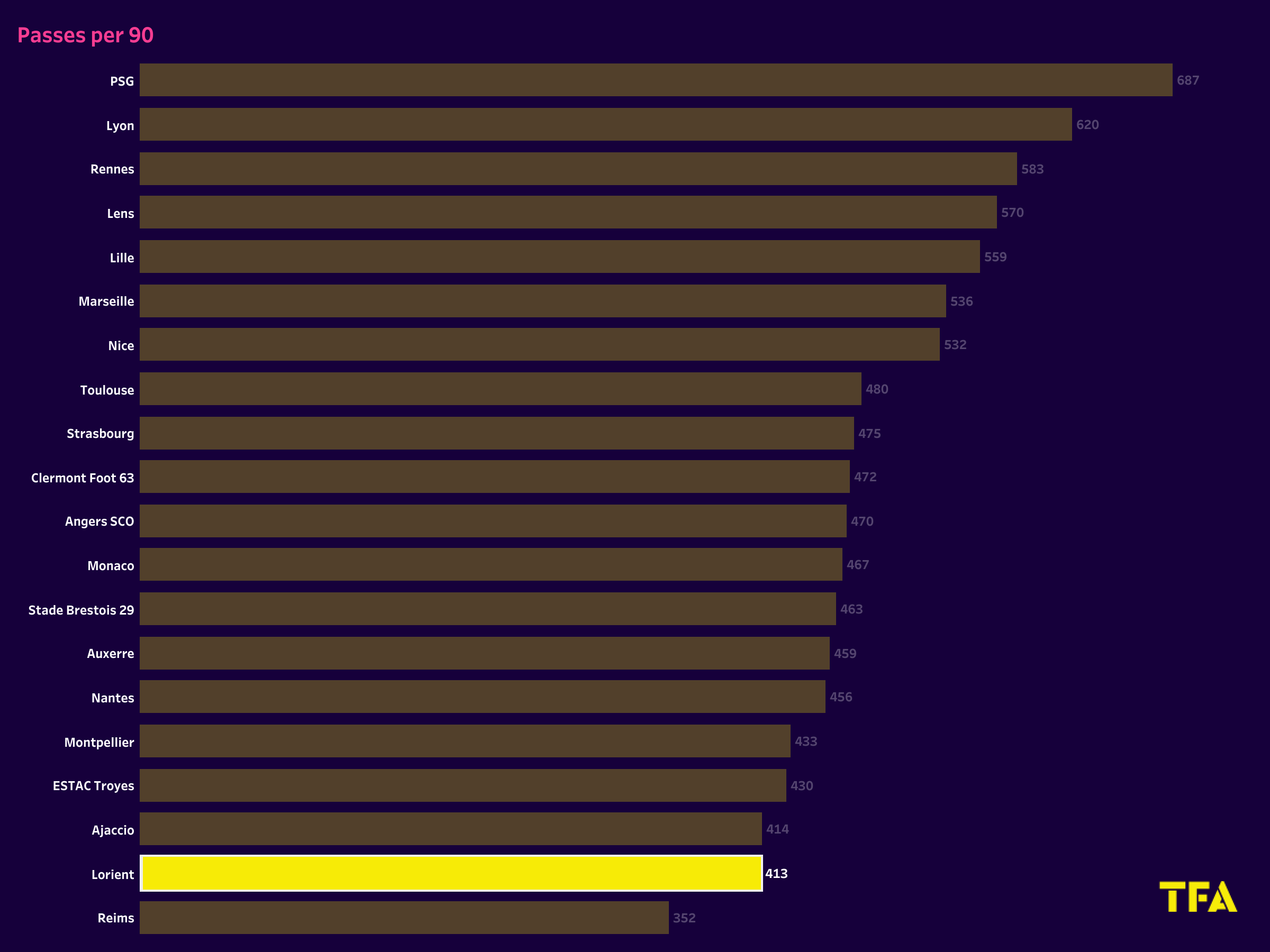 Lorient are second-to-last in the league in terms of total passes per 90 minutes. The two teams above and below Lorient are Ajaccio and Reims, respectively. Reims is currently 11th in the Ligue 1 standings, whereas Ajaccio is 19th. It is interesting to observe that Lorient are in 5th place as compared to the two teams above and below them in the stats for passes per 90. This is an indicator of the intent shown by Lorient to play counter-attacking football and capitalise on this strategy. 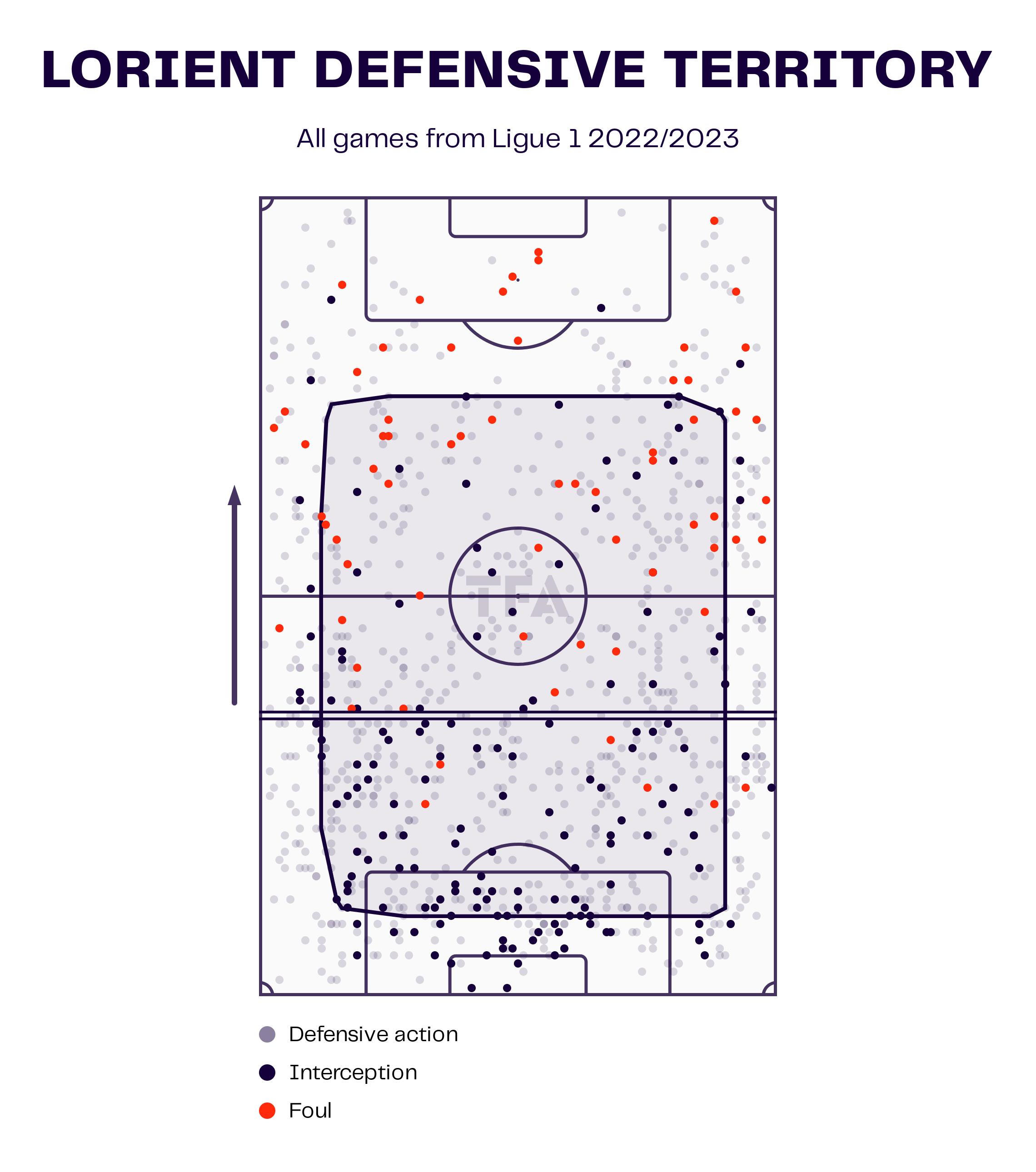 Lorient have surprised many with the displays they are giving on the pitch, especially against the big teams. Their defence has been solid, averaging 51 interceptions per 90. The above viz depicts the team’s defensive territory during the 2022–23 Ligue 1 season. One of the key things that can be observed is that the French side hasn’t committed any fouls in their defensive areas. They haven’t conceded a penalty, and the defence has shown discipline. Lorient are ranked at the bottom in terms of recoveries in the opponent’s half, which shows their intent to sit back deep. They are also last in terms of pressing efficiency, with only 33% efficiency. 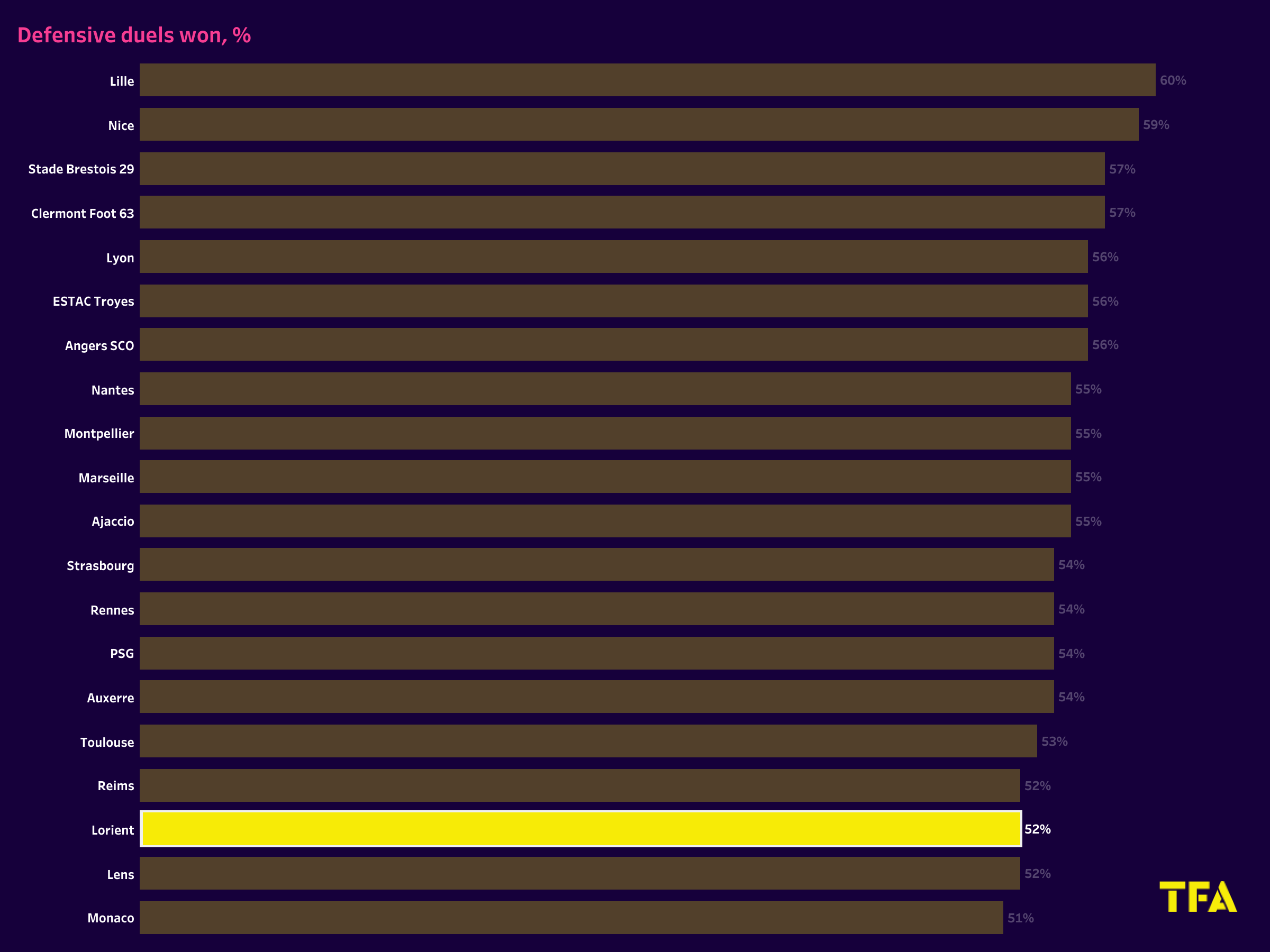 The above viz shows Lorient’s percentage of defensive duels won. The French side is not particularly in the best of books, with only 52% of defensive duels won in the Ligue 1 2022/23 season. Overall, Lorient have blocked 48 shots in the 15 matches played, for a blocked xG of 2.39. Lorient appears to be struggling in the air, having won only 43% of ariel duels so far.

Lorient currently sits in 5th place on the league table. While the club from Brittany has dropped points over the last few matches, they have remained competitive. Their next league match is against regional rival FC Nantes. Lorient are playing some impressive counter-attacking football this season. It will be interesting to see how they see their remaining season given that they are chasing some European glory.