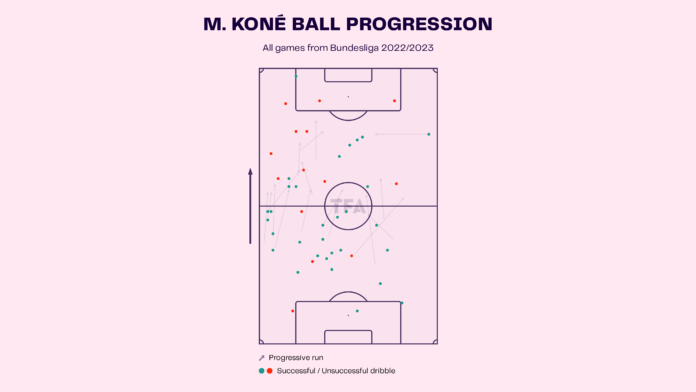 Kouadio Manu Kone has played some spectacular football in his first season in the Bundesliga and has become one of the league’s most complete midfielders. In his second season, the young Frenchman is starting to get linked with a move to a bigger club, with several clubs trying to join forces with the midfielder. One of them is Ligue 1 giants PSG, who are closely monitoring the player. The Bundesliga midfielder possesses enough quality on the ball to be a competent offensive threat and is an absolute machine when it comes to pressing and winning duels. Kouadio Kone appeared in 14 games for the 2022/23 Bundesliga season, scoring one goal and assisting another. Below are some stats for the player from his current season. 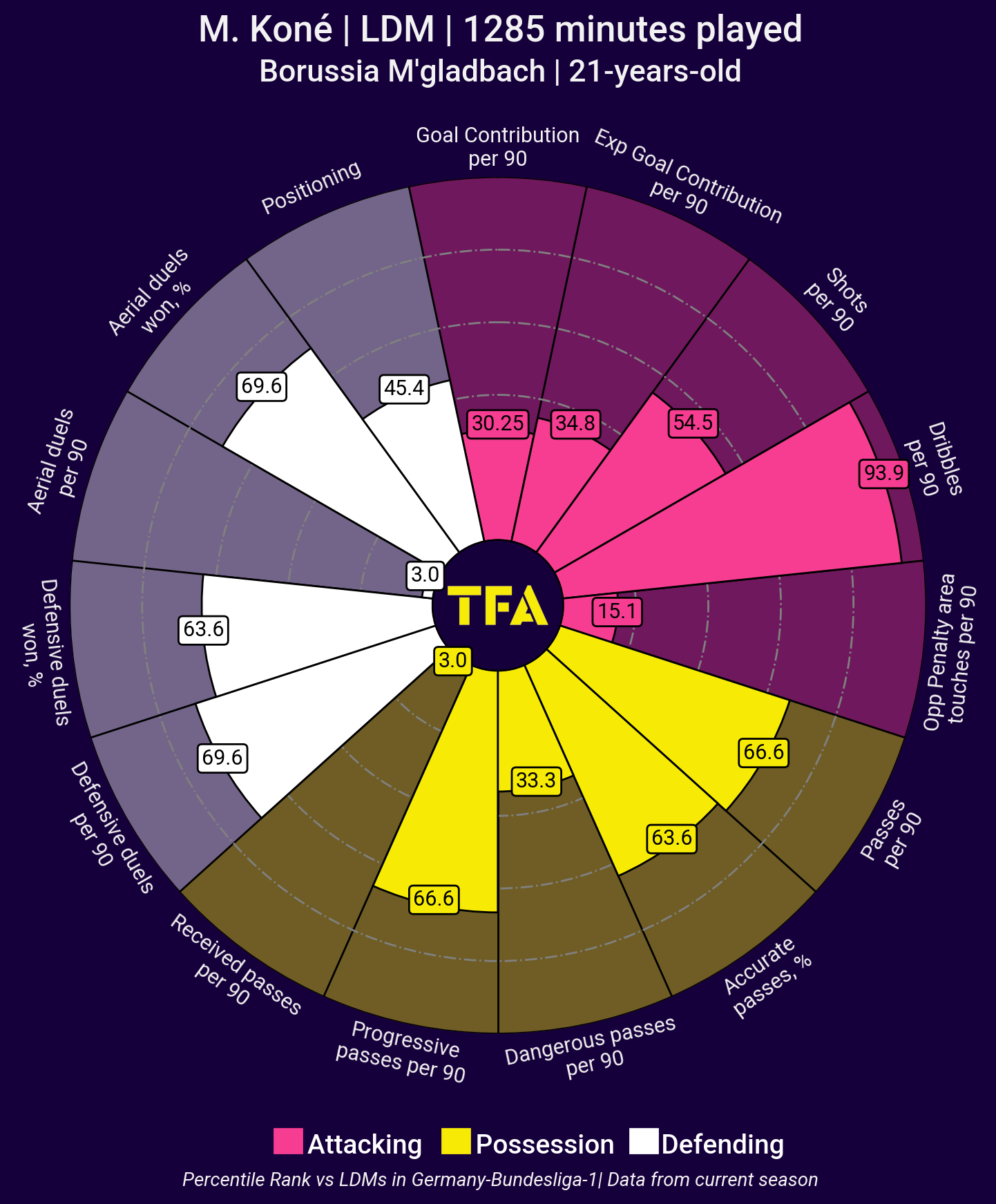 The above viz shows the percentile rank in comparison to the other left defensive midfielders in the league. Manu Kone’s ability to defend has been extraordinary. He is ranked high for aerial and defensive duels won, and this has been a crucial advantage for the player and his team. He has also maintained impressive possession stats and ranks well in terms of progressive passes per 90. He provides a countable option in the midfield who can take control of the game and does not give away the ball. 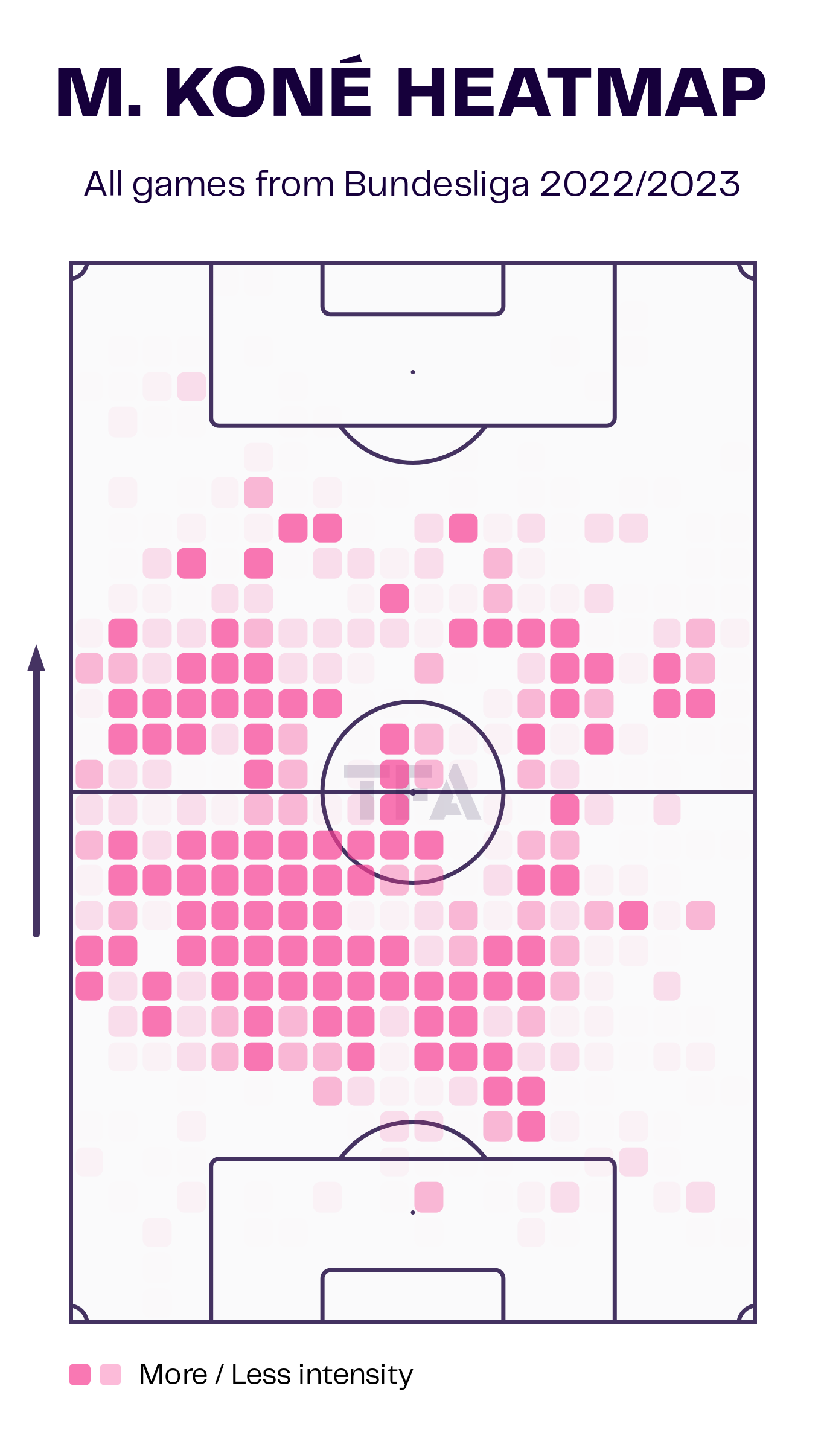 Manu Kone makes movement in the defensive and middle thirds. He also shows intensity in the final third in order to put high pressure and make high regains. Kone averages 47 passes per match with a completion rate of 87%. Midfielders must have an exceptional ability to read the game and conserve energy for use at critical moments. Kone possesses that ability and plays the entire 90 minutes with the same intensity. 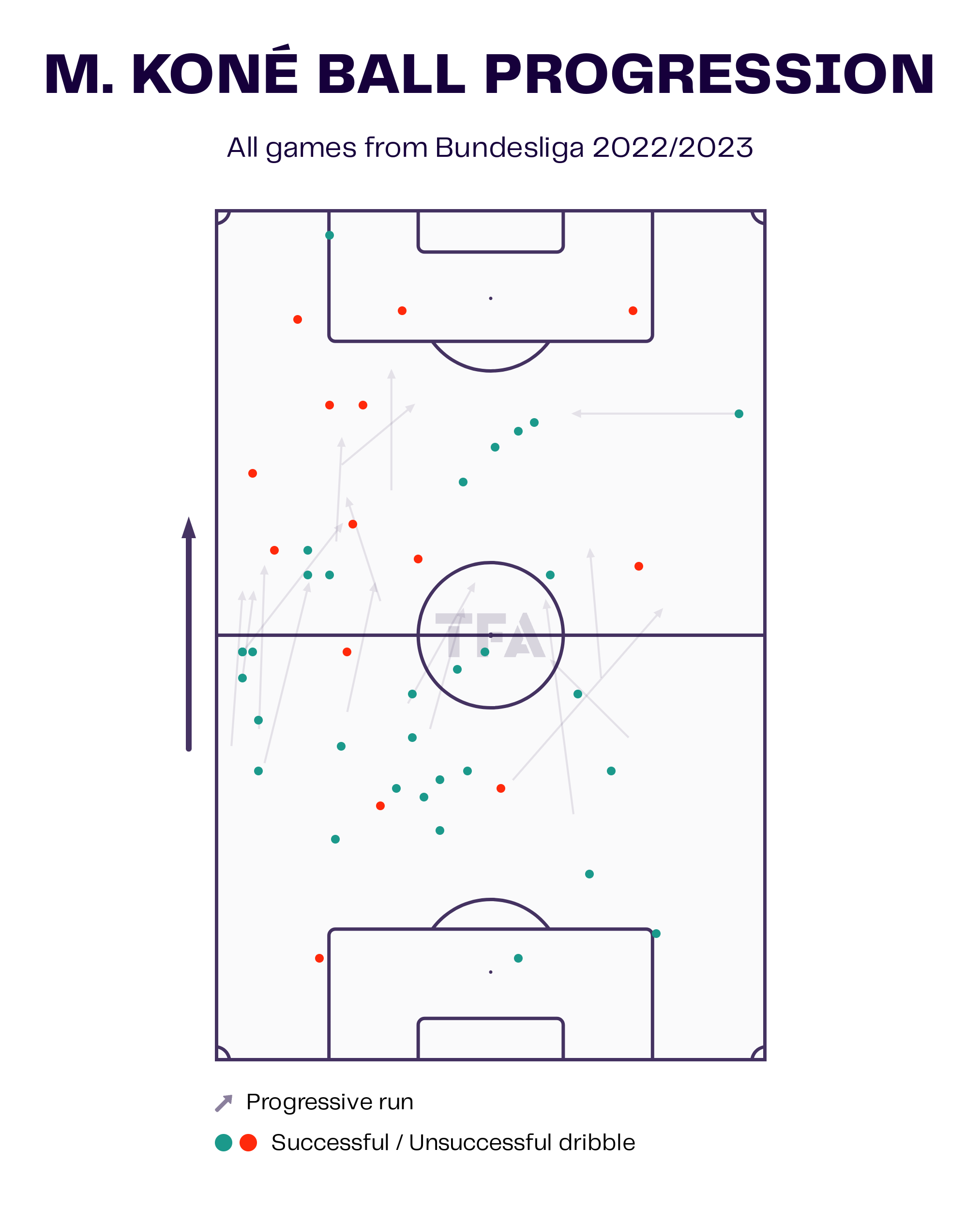 Kone enjoys dribbling and is a player who takes on his man. He makes 3.22 dribbles on average and is successful in 70% of the attempts. Most of his action is in the middle third of the pitch. His confidence and ability to keep hold of the ball are what make him worth more and are one of the reasons behind his rising demand. 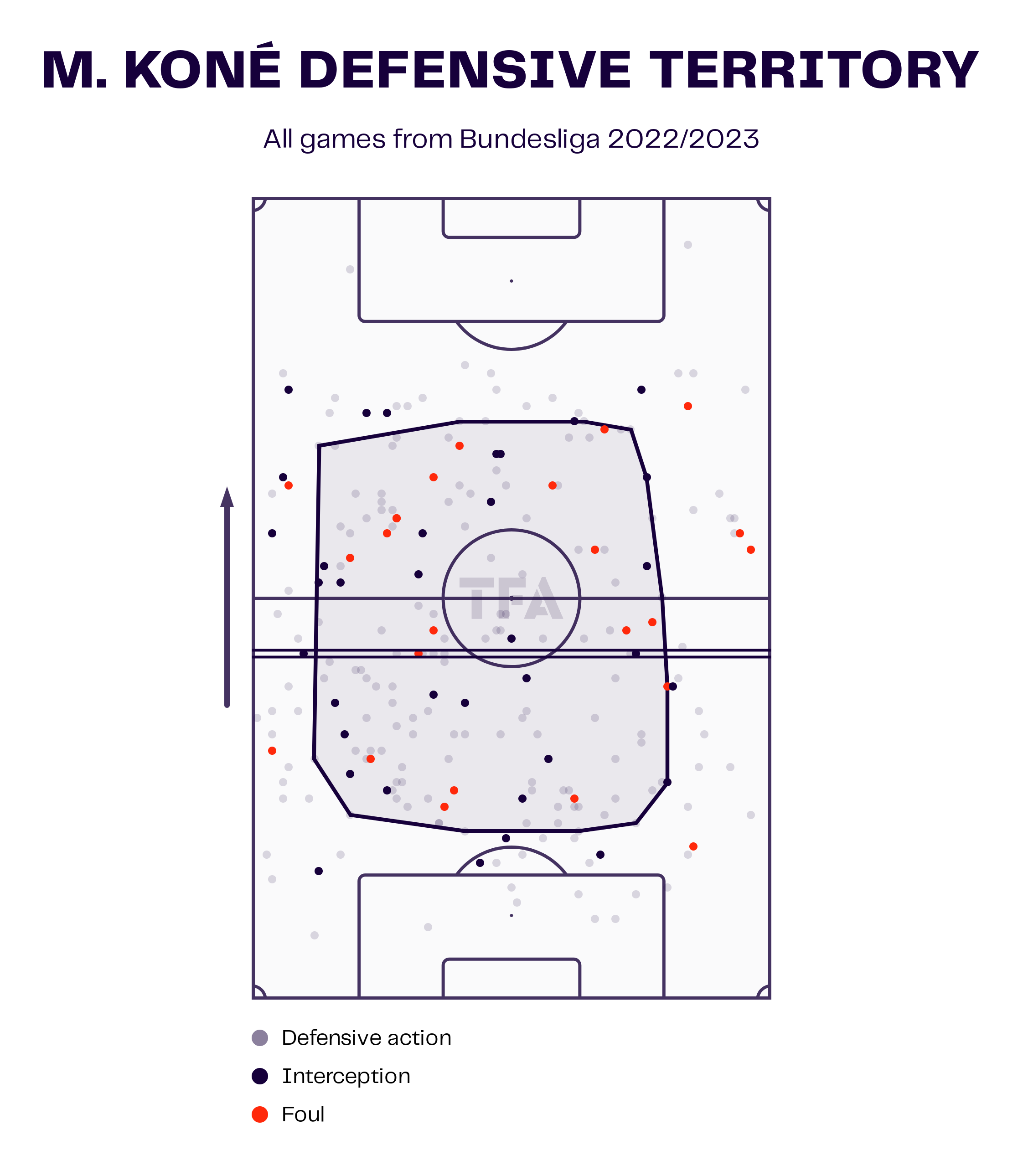 The above viz represents the defensive territory of the player. The distribution of his tackles and interceptions describes his role in the team well, as most of his interceptions are in the middle third and final third of the pitch. He averages 8.12 defensive duels and 3.43 interceptions per game. In terms of fouls, he gives away 1.68 fouls per match but has not given away many in dangerous areas. 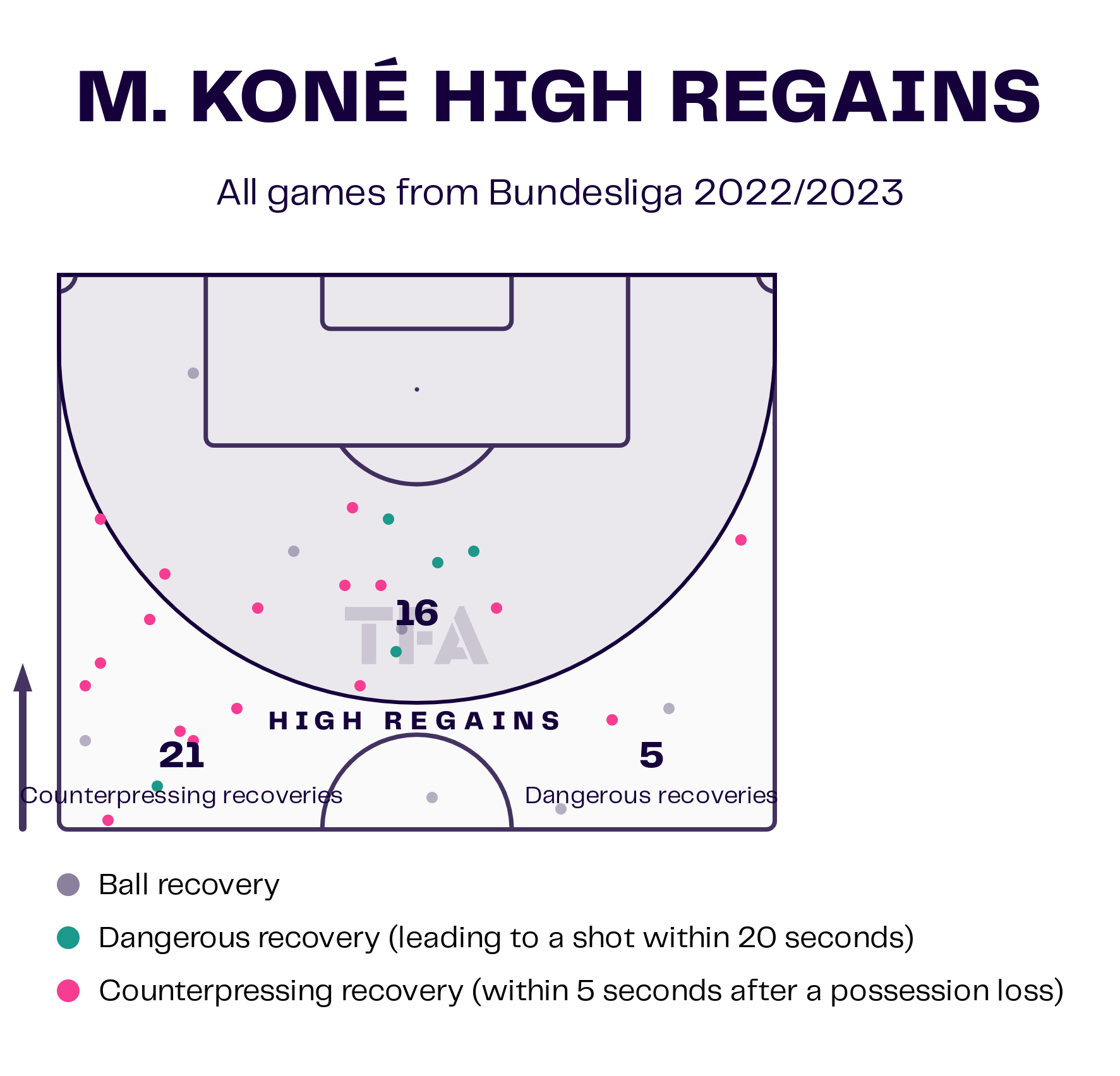 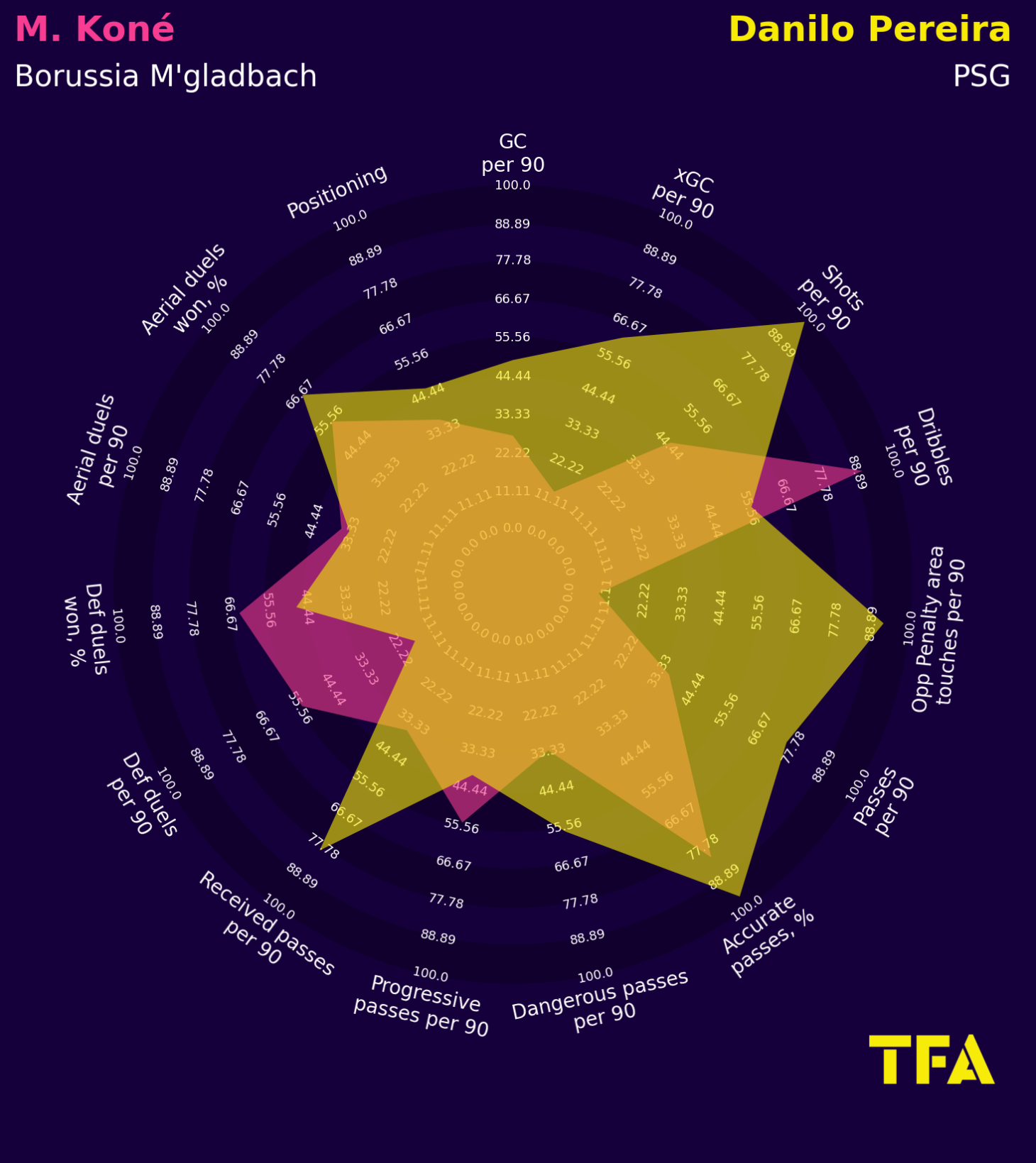 Kone would most likely replace Danilo Pereira at the French capital club. The above viz is a comparison between both players. It can be seen that Kone is performing much better in terms of defensive numbers. Pereira has an upper hand in attacking stats. Kone is making more progressive passes per 90 as compared to Danilo.

Overall, Manu Kone has the best dribbling ability among pure midfielders in the league, and his ability to escape from traps and even two-versus-one situations around the centre of the pitch is respectable. His strength in duels makes him a valuable asset in any defensive line or situation, and he is comfortable running the pitch forward to press or retreating to form a middle block. Manu Kone has a terrific set of skills and is unquestionably ready for the type of football that is played by some of the European giants.

Under the microscope: The stats behind Franck Haise’s side run to...