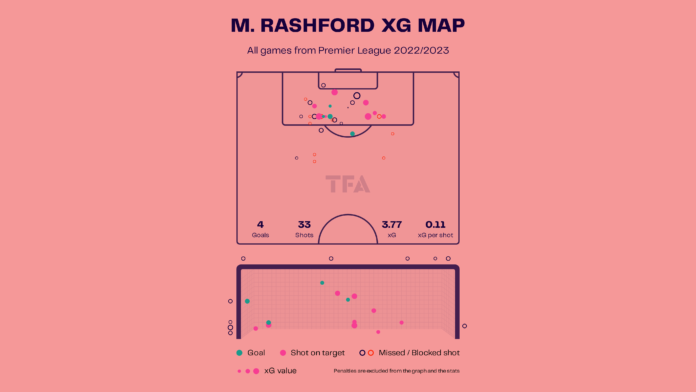 Marcus Rashford has been linked with a move away from Manchester United for the past couple of seasons. The most recent interest comes from Ligue 1 club Paris Saint-Germain, with the club’s president praising the player’s abilities. Amid concerns over the futures of Lionel Messi and Kylian Mbappe, the French club will need a player to count on in the upcoming seasons. The England forward will be out of contract in June, although United have the option to extend for another year. Rashford has scored eight goals for United this season and three for England in Qatar to help them reach the quarterfinals of the World Cup. We now look at some of the stats that show why the French capital has shown such an interest in the young England star. 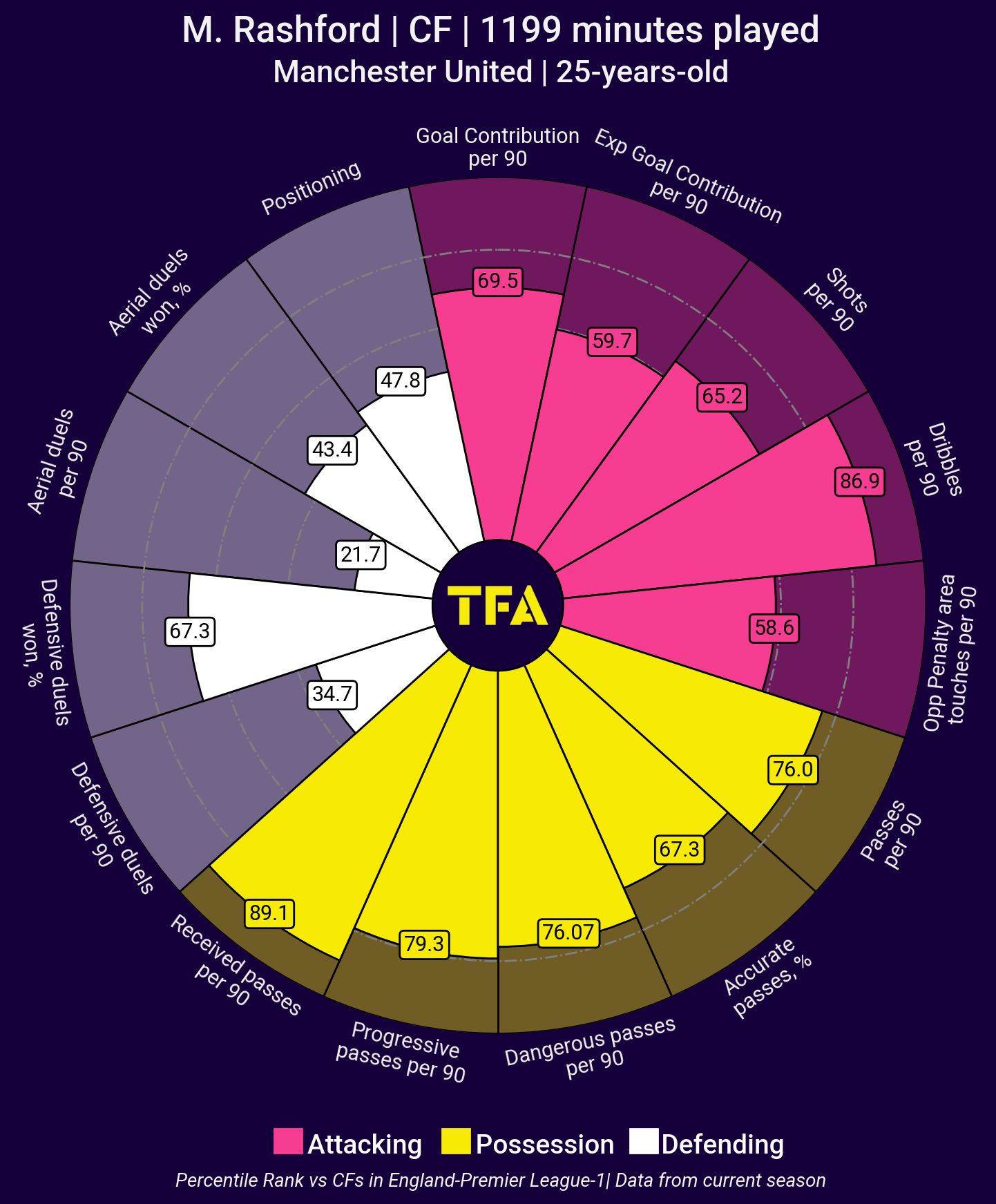 Marcus Rashford is a regular for Manchester United. He is adept at cutting infield and shooting, and his movement constantly puts his direct opponent to the test. The Englishman played 14 matches in the Premier League this season and scored four goals along with two assists. The above viz shows the stats of the player in comparison to the other players featured as centre forwards in the Premier League. It is observed that Rashford has performed well in terms of dribbles per 90 and positioning in terms of passes received. Additionally, Rashford has contributed in terms of ball progression and dangerous passes. 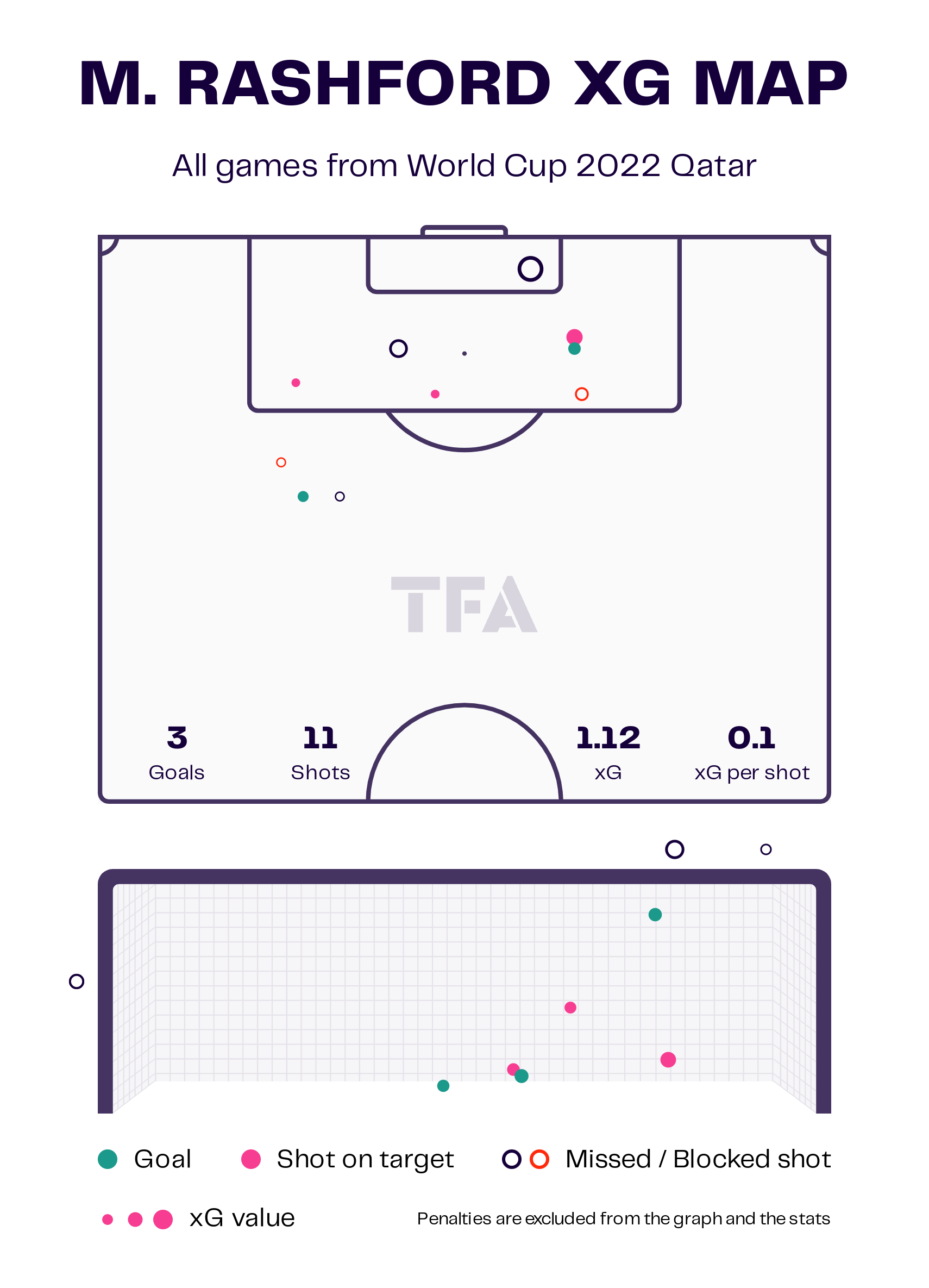 In the World Cup season 2022, Marcus Rashford played one match (plus 4 as a sub). They have six shots on target from a total of nine shots and have scored three goals (1.12 xG). This shows the reliability the team can have from the player, given that he has impressed for England During the World Cup. Rashford has an improved performance when he is surrounded by a more quality team. 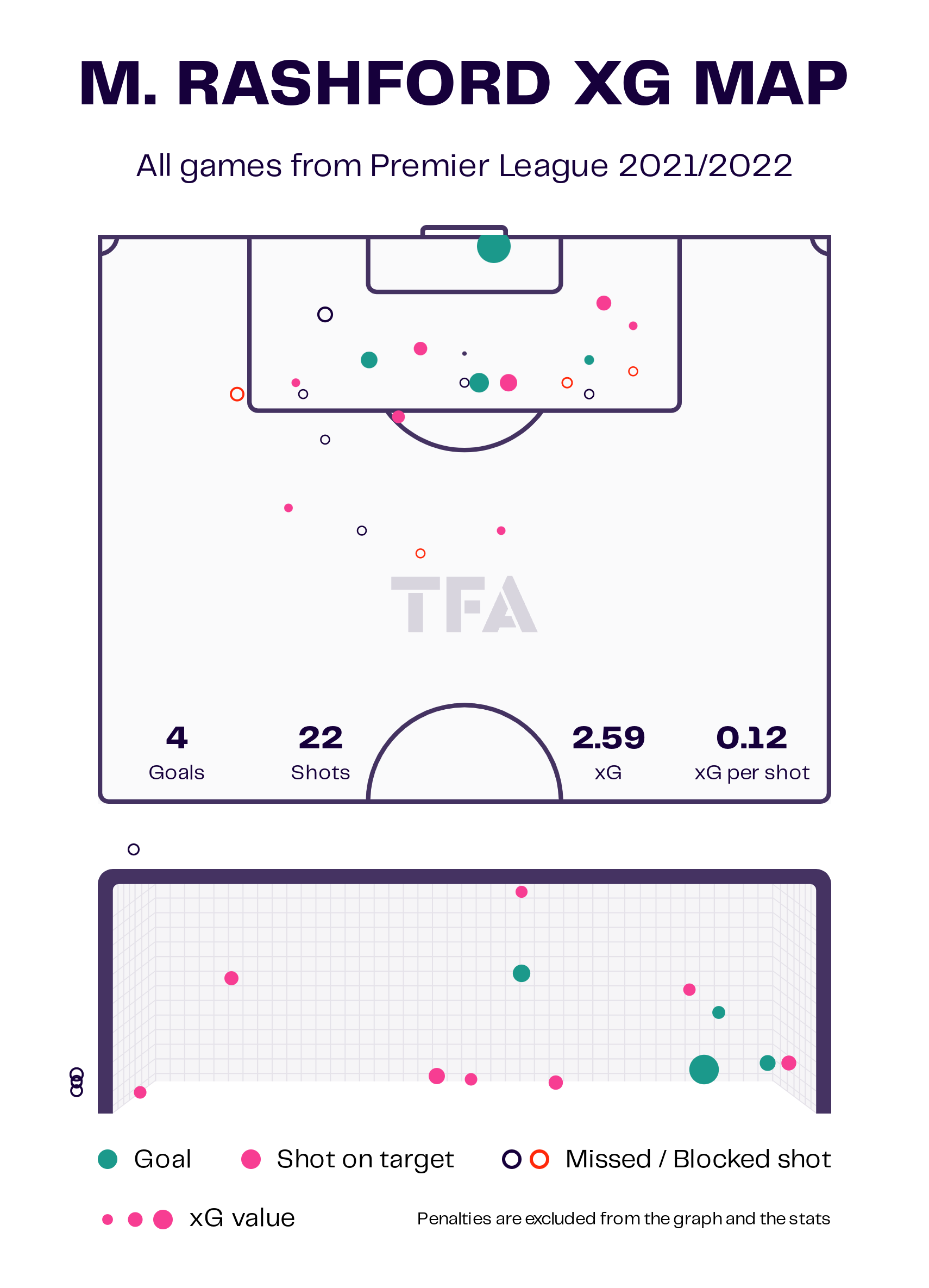 Marcus Rashford has scored four goals in 25 matches in the Premier League 2021/2022 season. Overall, Marcus Rashford’s with a 2.59 xG, moreover, Rashford’s total goal-contribution (goals + assists) is six. This shows that Rashford did not have a particularly impressive 2021 to 2022 season as compared to the current season which is halfway through.

Looking at the data the progress made by Marcus Rashford since the 2021-2022 Premier League season is visible. It can provide some certainty as to his ability to grow and perform at the highest level. 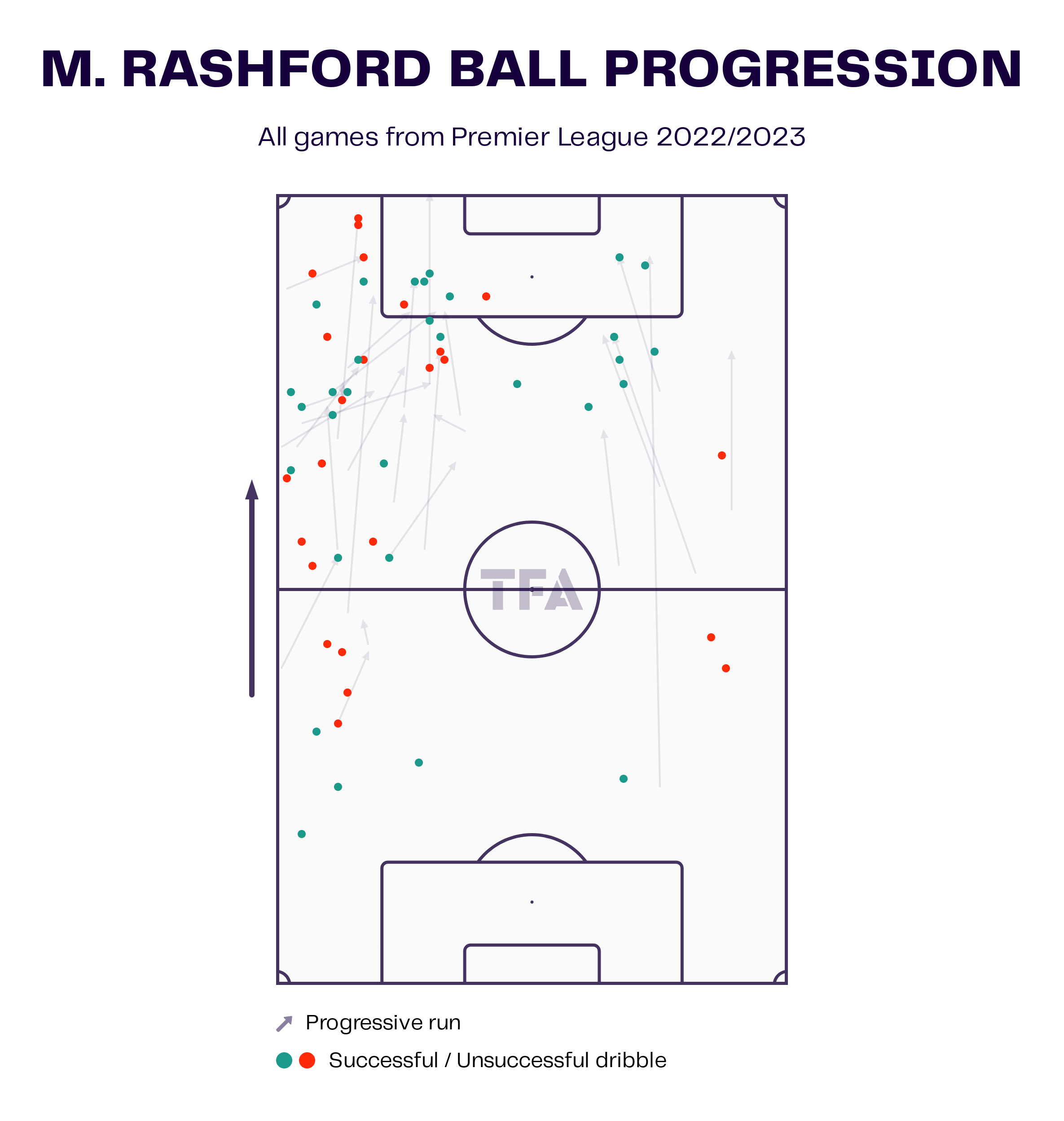 He favours dropping deep and receiving possession wide before dribbling diagonally towards the goal. In doing so, he can gather momentum and work himself space to shoot, or dart on the outside. Defenders prefer not to follow Rashford when he drops, because of the risk that comes with leaving spaces in behind. There are few who could genuinely compete with him in a race. 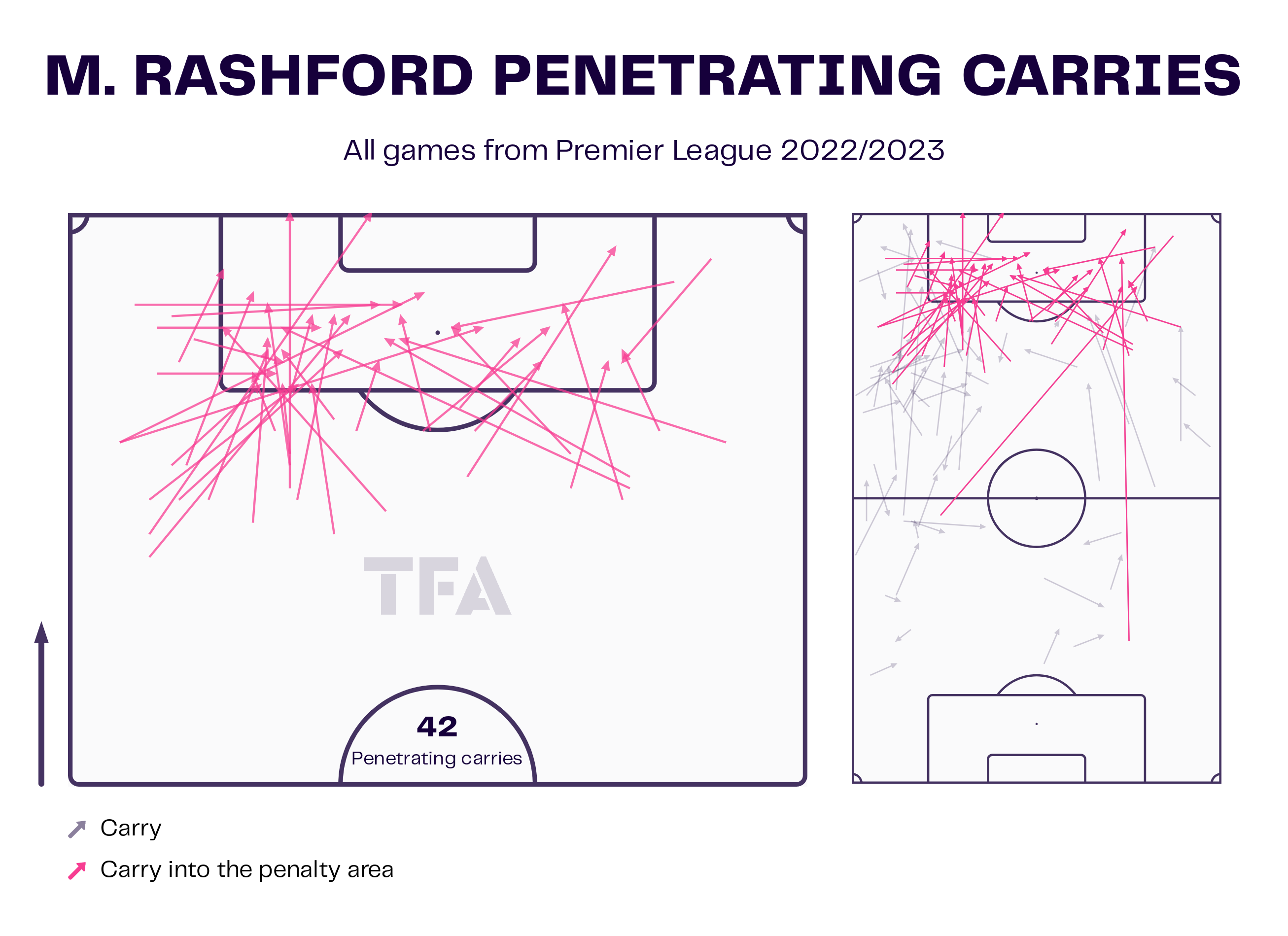 Rashford is at his most threatening, however, when he moves into a position on the shoulder of the last defender. This is typically done on the outside of the opposing right back in order to make a diagonal run towards goal. Similar to the likes of Kylian Mbappe’s role at Paris Saint Germain. The viz above depicts Rashford’s penetrating carries in the Premier League in 2022 and 2023. This suits PSG’s style of play, and Rashford can naturally fit into the system.

Who Would Rashford Replace? With Mbappe’s contract set to expire at the end of next season, PSG must find a suitable replacement. The above viz shows the comparison between the two players in their respective leagues. It can be observed that Mbappe has played better than Rashford and has better stats than him in most of the data points mentioned above. It is no doubt that Mbappe’s form is unmatched; Rashford, on the other hand, needs plenty of improvement in terms of his overall attacking prowess.

In conclusion, Marcus Rashford is a player who has much more room for growth. In case he decides to move to Ligue 1 and play for PSG, where he will be surrounded by much more quality players as compared to his days at Old Trafford. With the futures of some PSG stars being uncertain, Marcus Rashford may have a chance to make a dream move to the French Capital Club and begin to display his true strengths.

Under the Microscope: How Folarin Balogun is helping Reims get points...