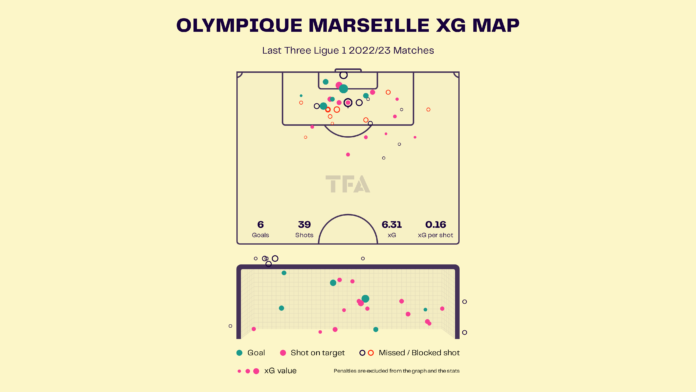 Third-placed Marseille remains hot on the heels of Lens in second after coming back from a goal down to beat Lorient three goals to one at home in Ligue 1 on matchday 19. Lorient took the lead after 29 minutes when Terem Moffi turned in his 12th league goal of the season. Marseille then came roaring back as Sead Kolasinac levelled with a header before the break, while Alexis Sanchez and Jordan Veretout struck in the second half to seal the points. Following a run of four winless games in October, Les Olympiens have won their next six to rediscover their mojo. This run has seen them go from fifth in the standings to third with 42 points from 19 games. PSG, the league leaders and Le Classique rivals, are eight points ahead of Igor Tudor’s side in the title race. Let’s look at some of the stats for Marseille in the current season. 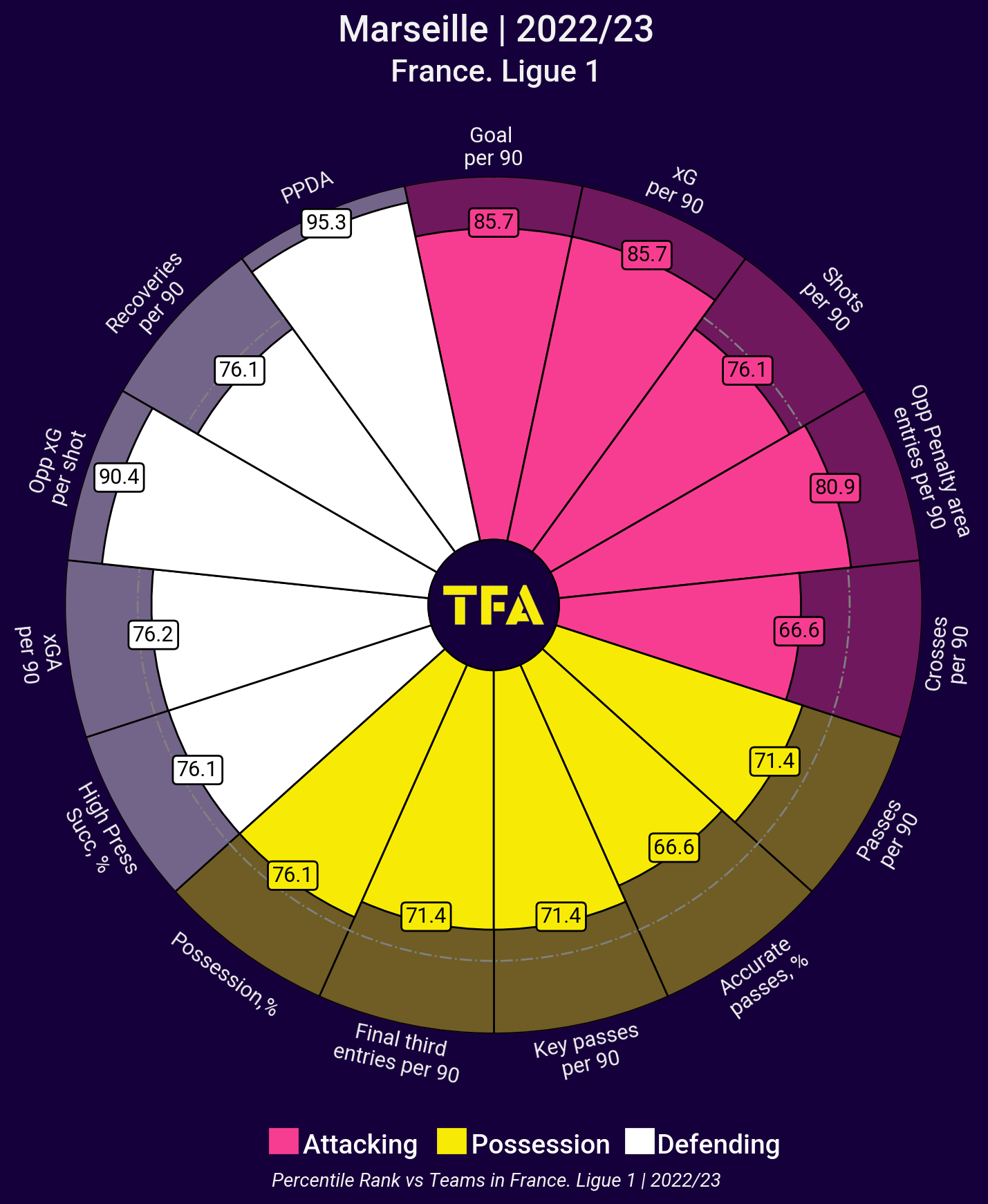 The above viz shows the percentile rank of Marseille in attacking, defensive, and possession stats compared to other teams in Ligue 1. We can clearly observe that they are ranked at the top in attacking stats, especially for expected goals and shots per 90. They are also at the top for entries into the opposition’s penalty area per 90. Defensively, too, they are performing well in their game in terms of high-pressure success rate and recoveries per 90.

Marseille in front of the goal in the new year 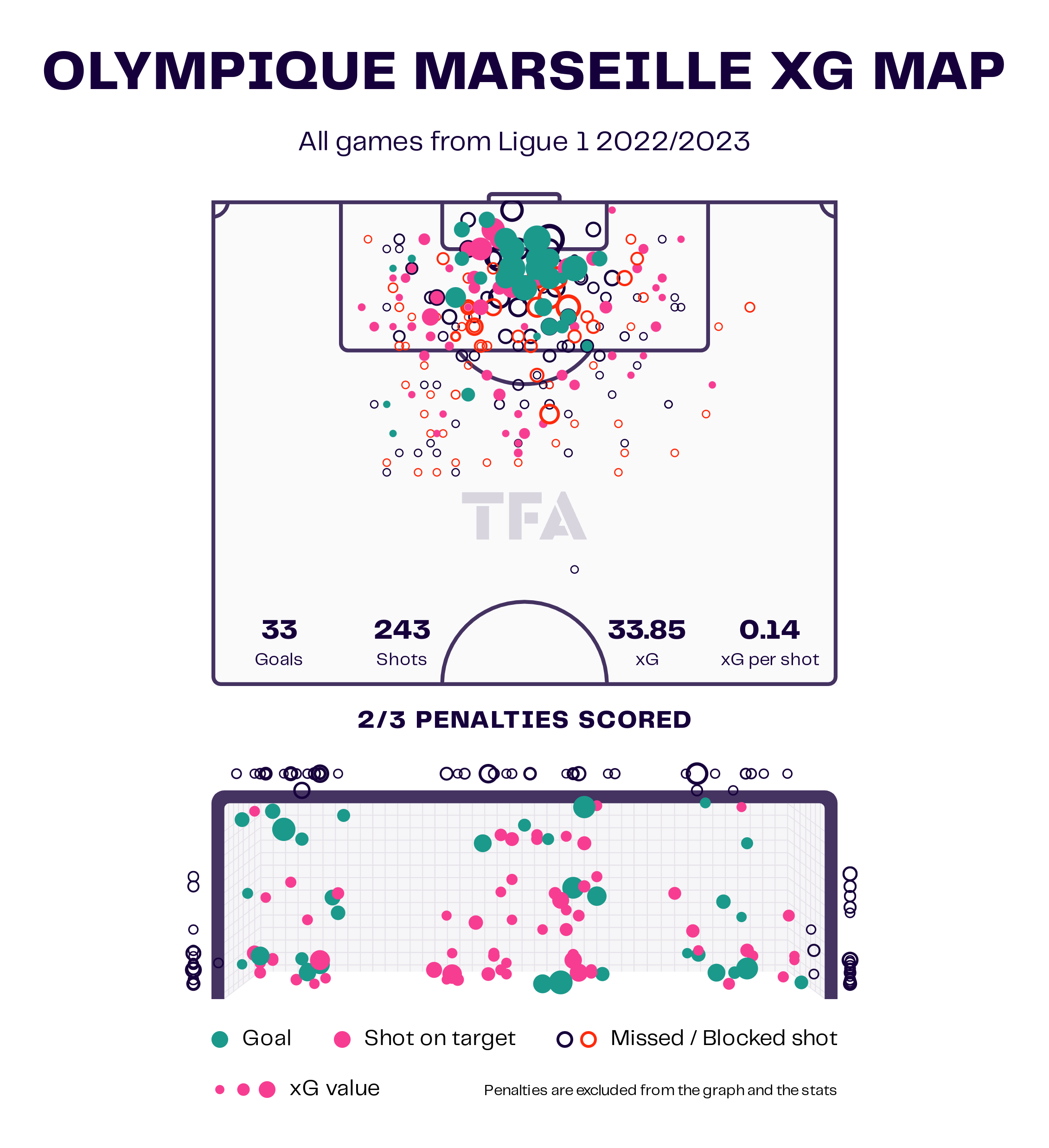 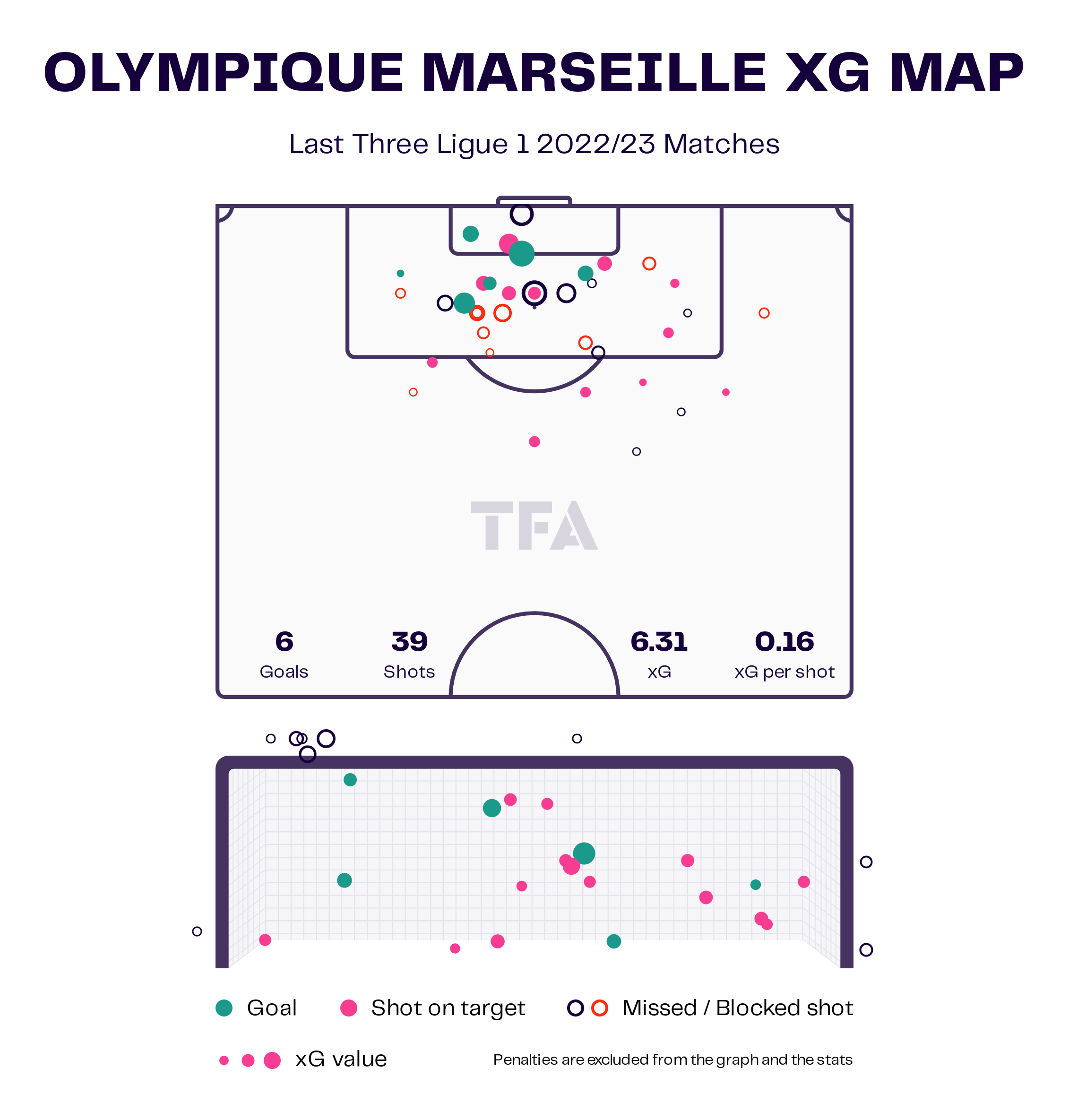 Marseille are currently in third place in the 2022–23 French Ligue 1, with 42 points from 19 matches played. They have scored 35 goals (33.85 xG) and conceded only 16 goals (20.2 xGA). They have scored most of their goals from around the six-yard box. They have also managed to take quite a few shots on target from outside the box. They are successful in taking shots from hazardous locations inside the penalty box, which raises their xG. Marseille have an average xG of 1.98 this season and an average of 36% shot accuracy, taking 14.29 shots per 90 minutes.

In their last three games, the team has scored a total of six goals from 39 shots, putting them at an xG of 6.31 overall. All of the goals have come from inside the box, and the team has an xG per shot of 0.16.

Performance in their recent outing 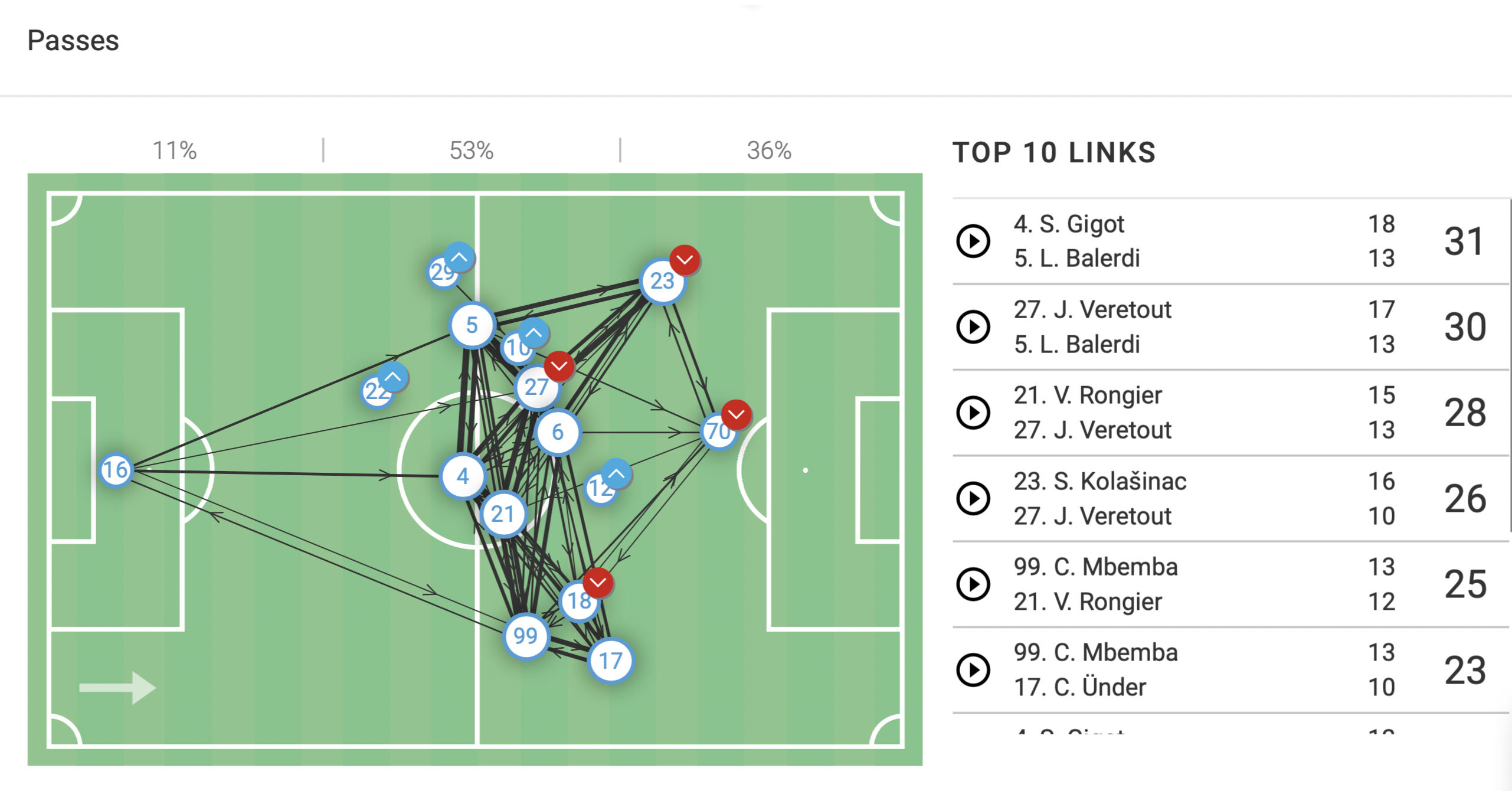 The above visuals depict Marseille’s pass and shot map for their most recent Ligue 1 outing against Lorient. The team can be seen playing high up the pitch. They play with four at the back and make sure to maintain possession, averaging 59.13% possession per 90. Additionally, they complete 540 passes per match on average.

The team took 13 shots, of which 8 were on target, against Lorient and managed to score three goals. They finished the match with a high xG of 1.97. 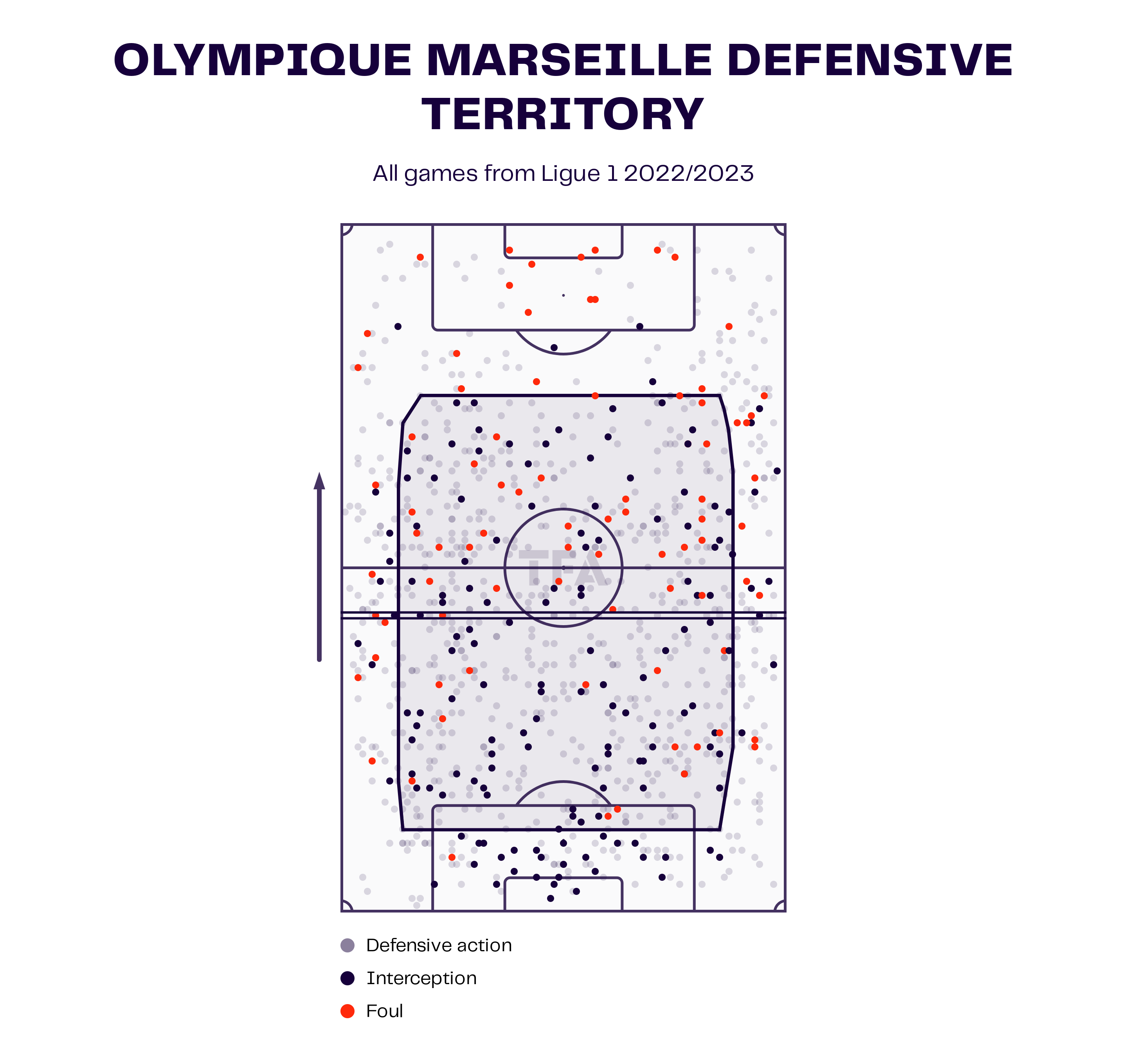 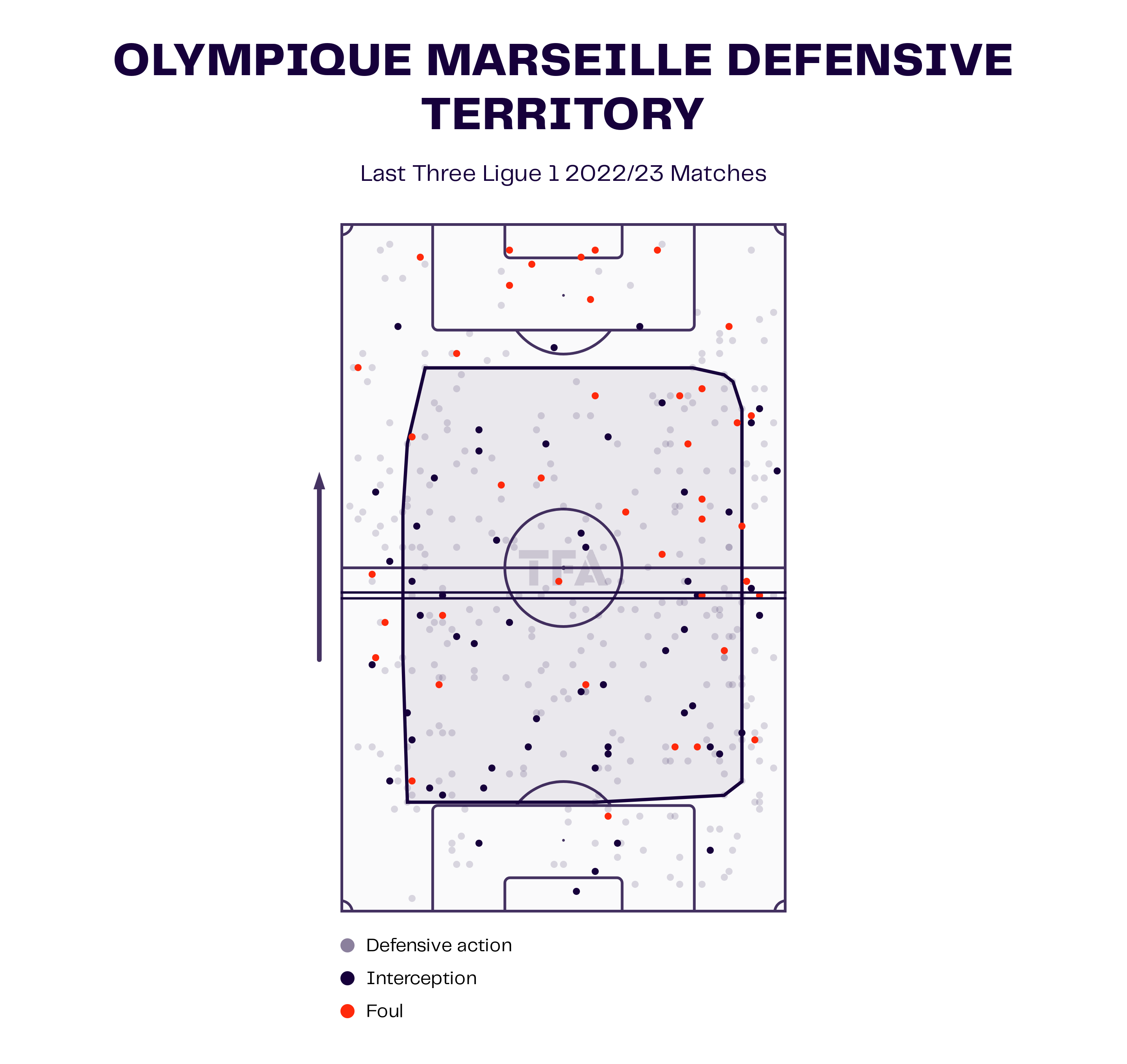 The graph above depicts the stats for Marseille’s defensive territory in Ligue 1 in 2022/23. They have 35.4 interceptions per 90 minutes. It indicates that Marseille are involved in a lot of defensive actions in the defensive third. The team gives up 11.8 fouls on average and wins 62.8% of their defensive duels. The team concedes 1.14 goals on average, which has been a reason behind their success this season. The team has given up a penalty in each of their last three matches but has fared well in other departments while defending. They have conceded only one goal in their last three outings, which has shown their solid intent in defence.

Overall, there is a long way to go before the 2022–23 champion is decided and spots in Europe are allotted. Marseille will look to redeem themselves before the season is over and grab one of the desired positions in the Ligue 1 standings.

Under the microscope: Why Troyes are having a tough time in...