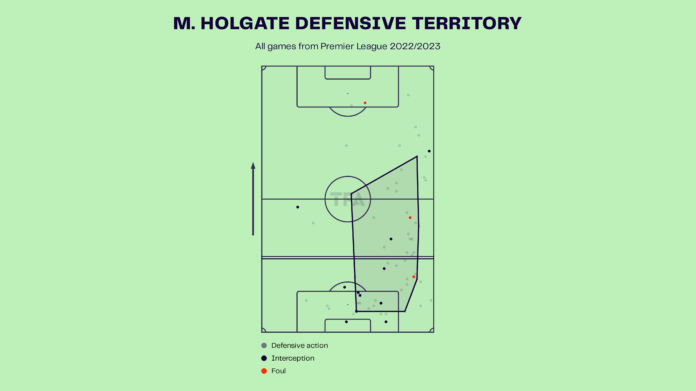 Mason Holgate is an English professional footballer who plays as a centre-back for the Premier League club, Everton. Ligue 1 side Lyon has made a transfer enquiry for Everton defender Mason Holgate. The 26-year-old defender has made only four appearances this season in the English Premier League and is struggling for regular game time under Frank Lampard. Holgate last appeared in a competitive game on August 27, playing 68 minutes for Everton against Brentford in a 1-1 draw. Holgate played 25 Premier League games last season for Everton, scoring two goals and providing one assist. So far in his Premier League career, he has appeared 122 times in the competition, with three goals and five assists. Below are his stats over a few seasons for the English side Everton. 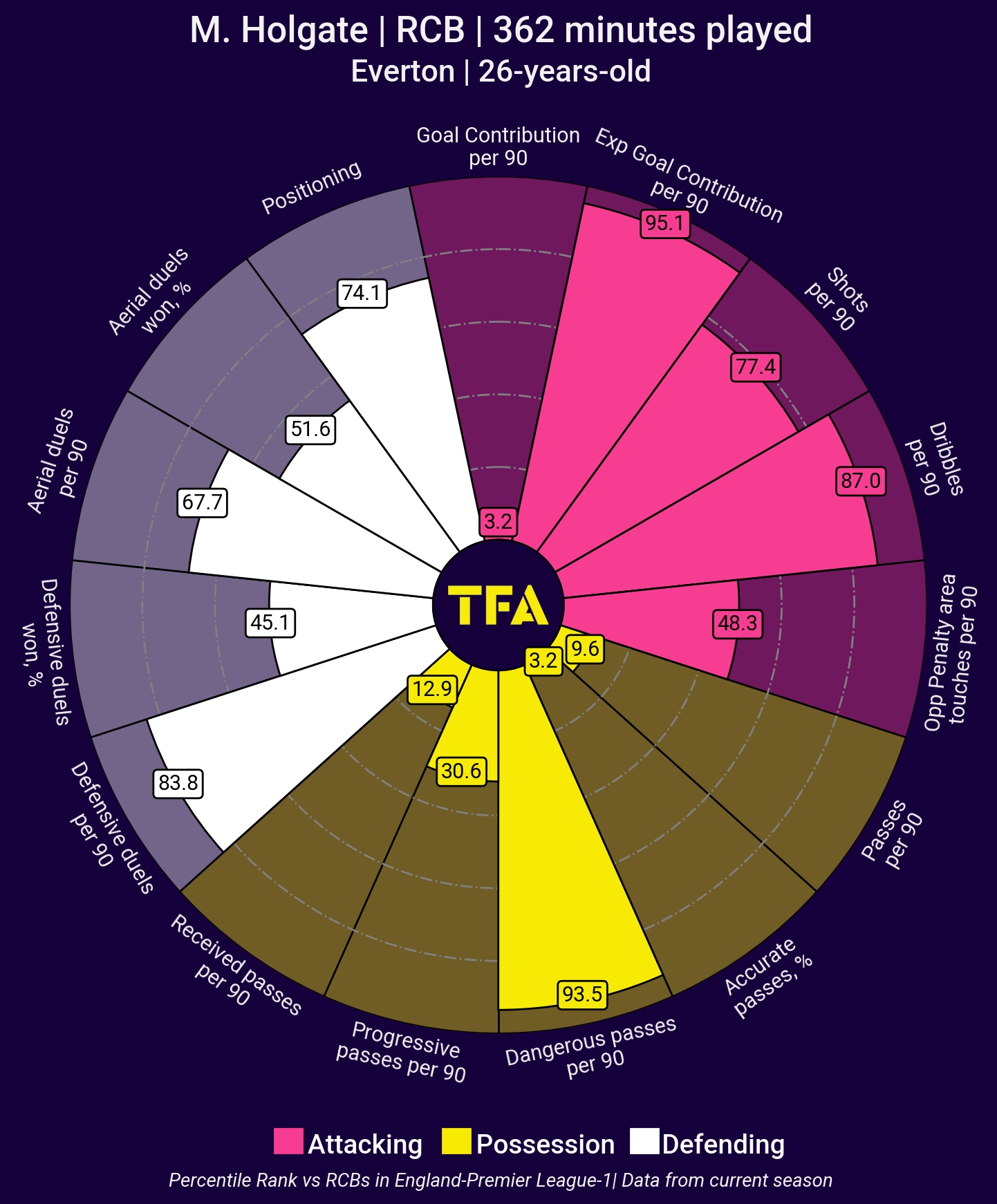 Holgate has made only four appearances this season in the Premier League and is struggling to get regular game time. The above pizza chart shows the overall stats of the player in comparison to other right centre-backs in the Premier League. The defensive side shows that Mason has a high percentile rank for defensive and aerial duels contested. He ranks highly for dangerous passes per 90. The player also has good attacking stats and is on top for expected goal contributions per 90. 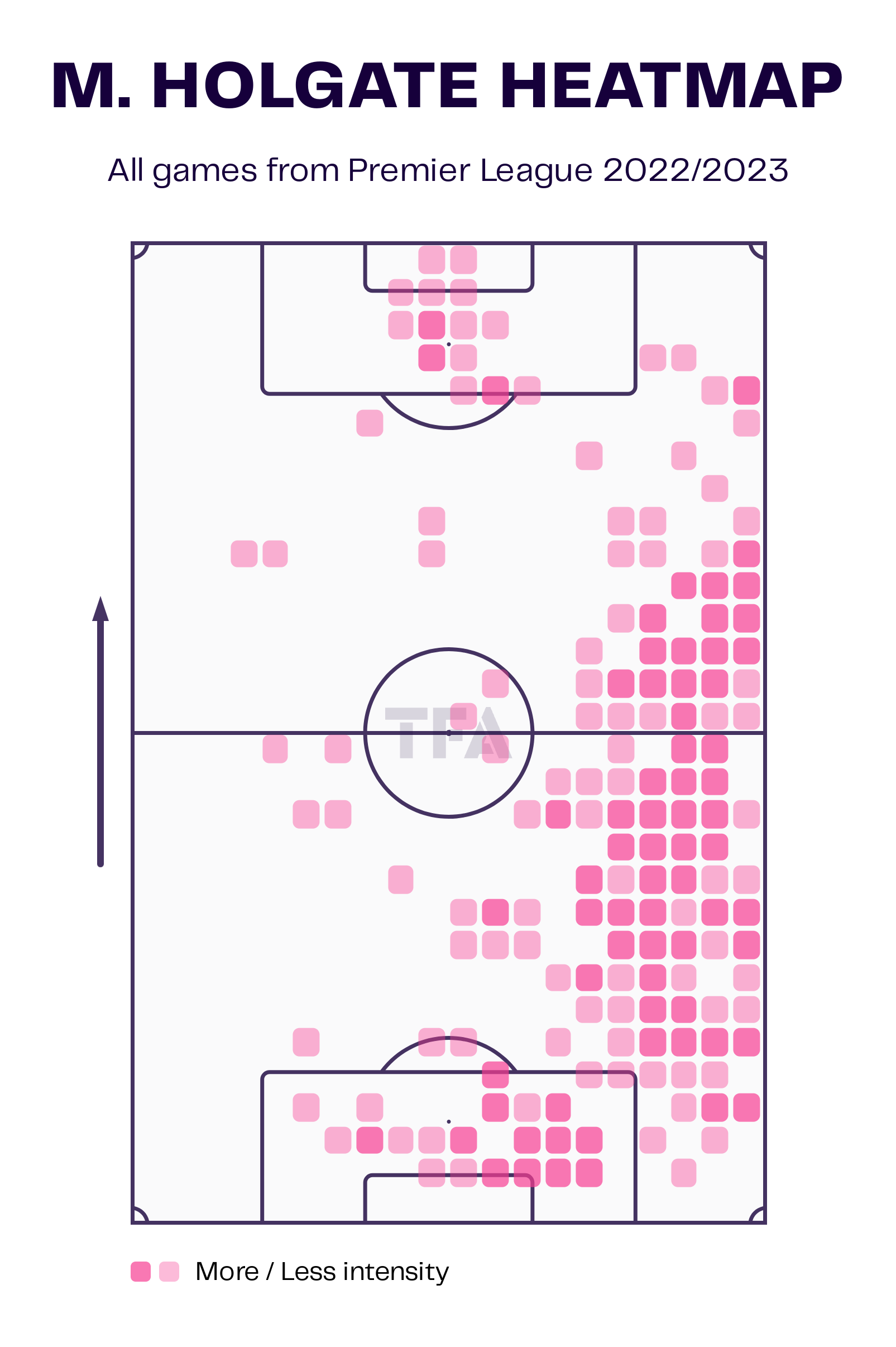 Mason Holgate covers the right flank in the defensive and middle third. He performs defensive duties as a right centre back, and more intensity can be seen inside his own box. Holgate makes 1.6 average interceptions per 90. It can be observed from the above that he plays with more intensity in the defensive third of the pitch, averaging 3.8 tackles per 90 minutes. 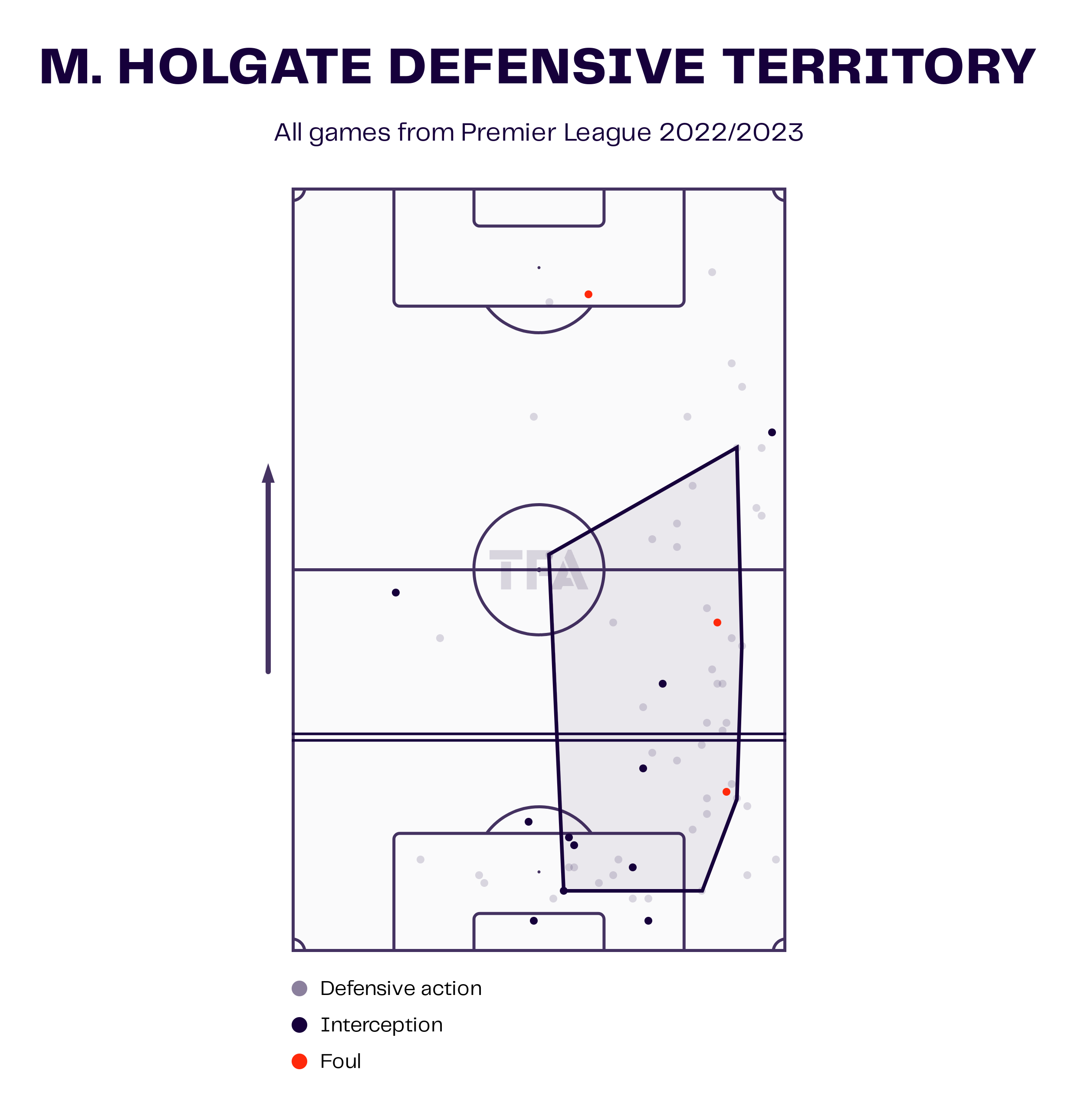 Body on the line 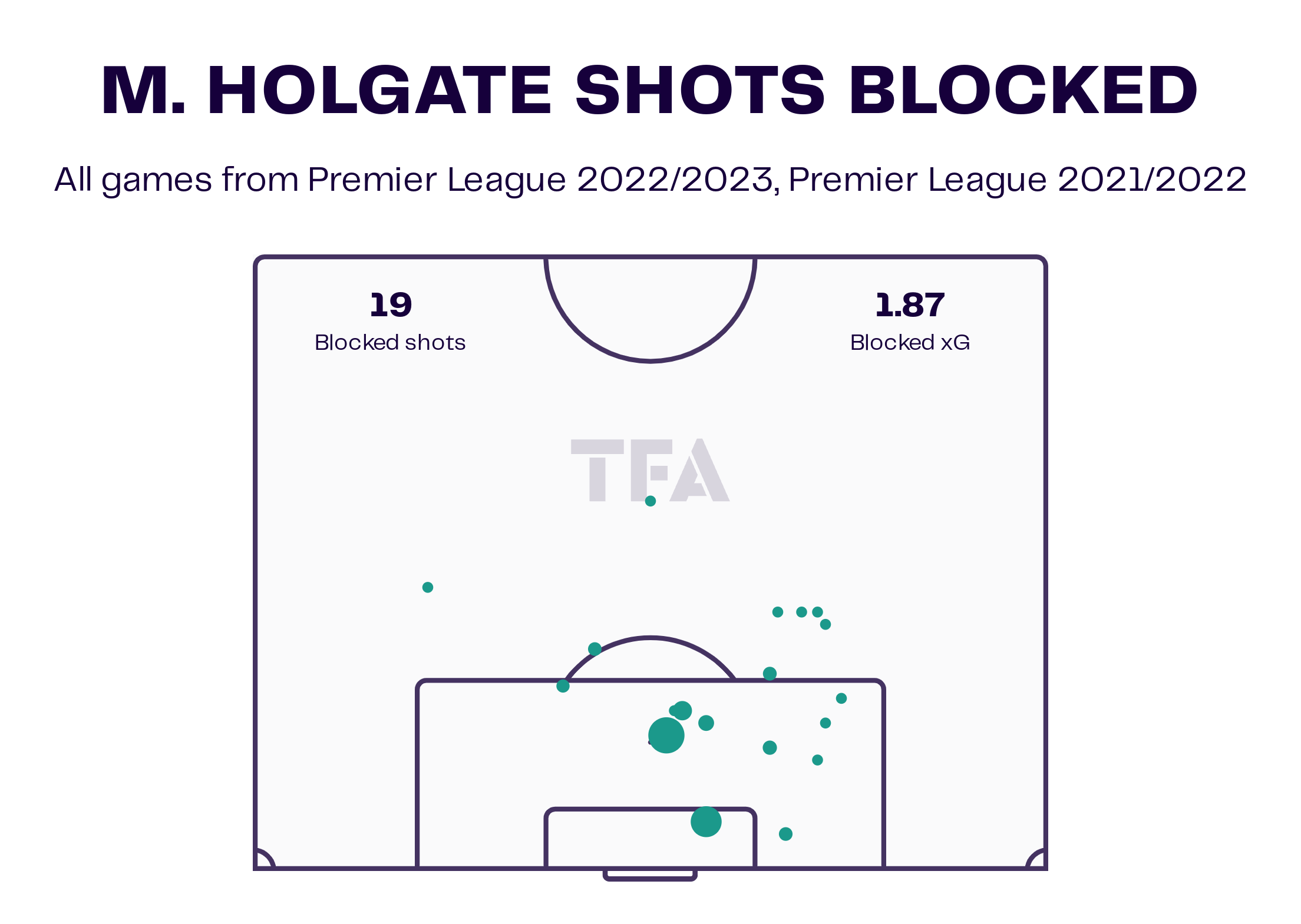 The above viz represents the shots blocked by the player over the last two Premier League seasons. He has a shot block xG of 1.87 and has blocked 19 shots. Most of his blocks have come from inside the box. In the 2021/22 season, he had an average of 1.5 shots blocked per 90 and 1.9 blocked shots per 90 in the current season. Holgate also averages 0.84 blocked passes per 90. 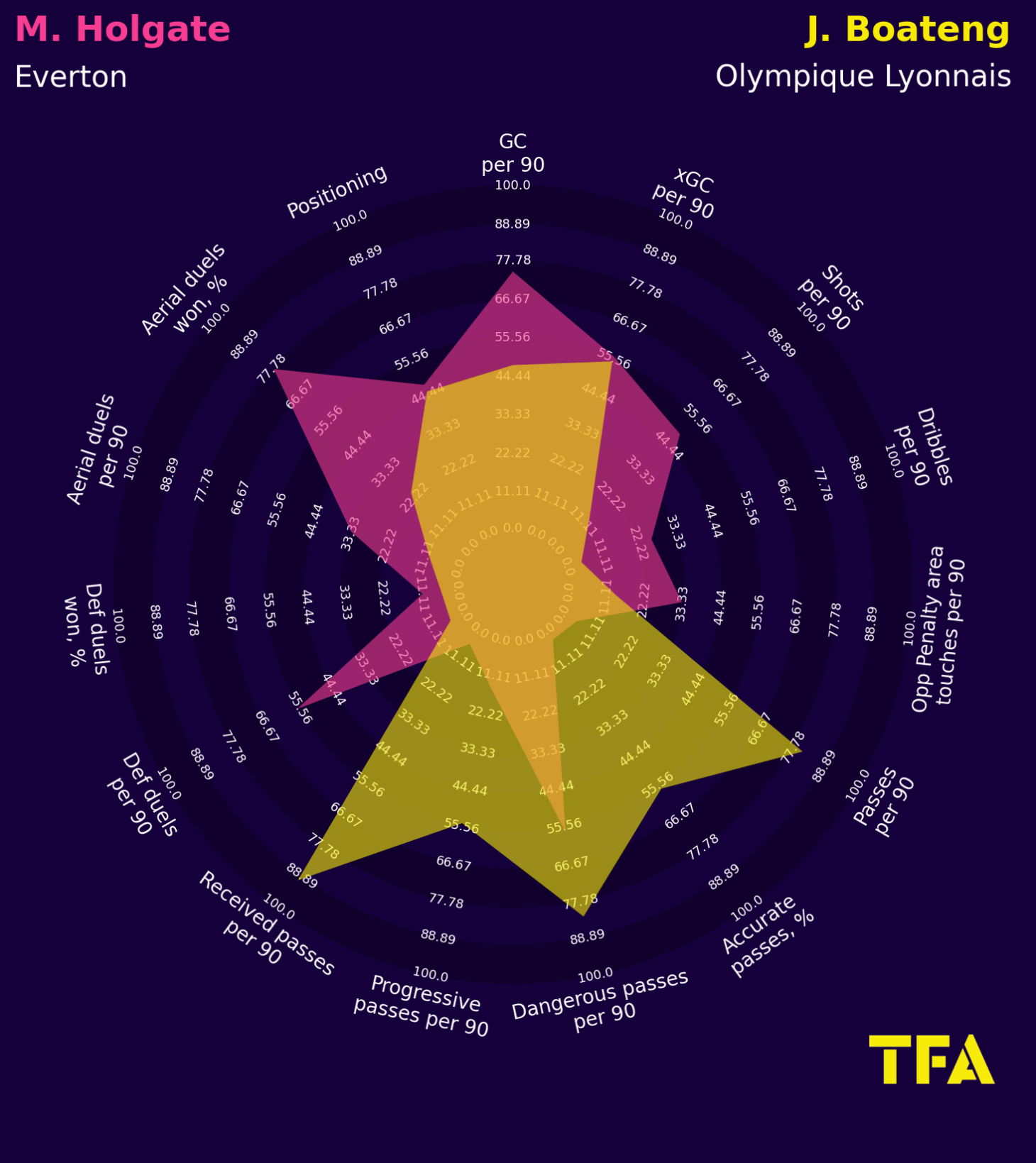 The above viz is a comparison between Holgate and Boateng for the matches played for their teams, Everton and Lyon, respectively. Holgate has done well in defence and has better numbers in terms of defensive duels won. Boateng, on the other hand, has fared far better in terms of overall passing stats. Positioning-wise, Mason is better positioned and also attempts more dribbles per 90. Overall, Holgate is a more quality defensive option given his age as compared to Boateng. Holgate also performs better on offensive plays.

Overall, Mason Holgate is a good fit in terms of being a central defender for his team over the course of the season in the Premier League. His performances and stats have been impressive at the moment, even though he has played very few games. His contribution has primarily been as a dependable option for the team who can also serve some offensive purposes by making forward runs and contributing to dangerous plays and passes. Lyon will be looking to have such a versatile central defensive option in their team.

4-3-3: Tuchel has a tactical decision to make over tactics to...

The making of Paris Saint German as amongst top sports brand...