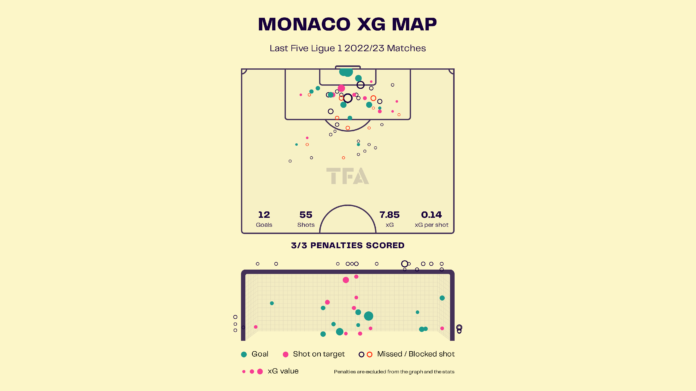 Monaco striker Wissam Ben Yedder scored a 14-minute hat trick as Monaco routed Ajaccio in a huge seven-goals-to-one victory on matchday 19 in Ligue 1. Ben Yedder scored in the 21st and 28th minutes with neat finishes before completing his second treble of the season with a penalty in the 35th minute. Substitute forward Breel Embolo added two late goals for Monaco as well. The result saw Monaco move up to fourth in the Ligue 1 standings with 37 points overall. Monaco will look to keep up the intensity in the future. Below are team stats from the current season. 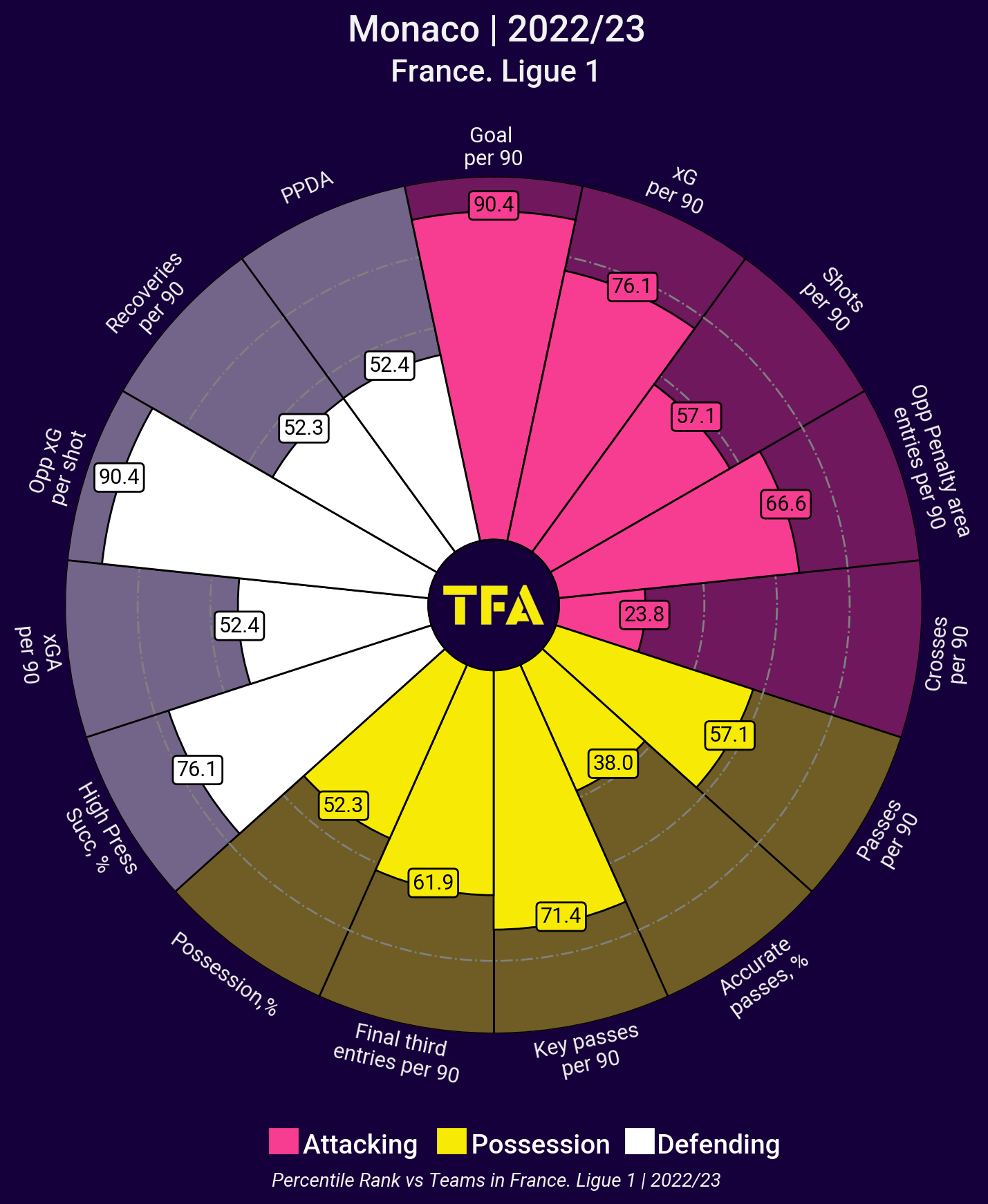 The above viz shows the percentile rank of the team in comparison to other teams in Ligue 1. It can be observed that Monaco are well ranked in the division. They are performing well in attack, with plenty to show for it. In terms of defence, Monaco are successful in putting high pressure on opponents. In the possession department, they are not able to maintain plenty of possession but are compensating in terms of key passes and final third entries.

The team in attack 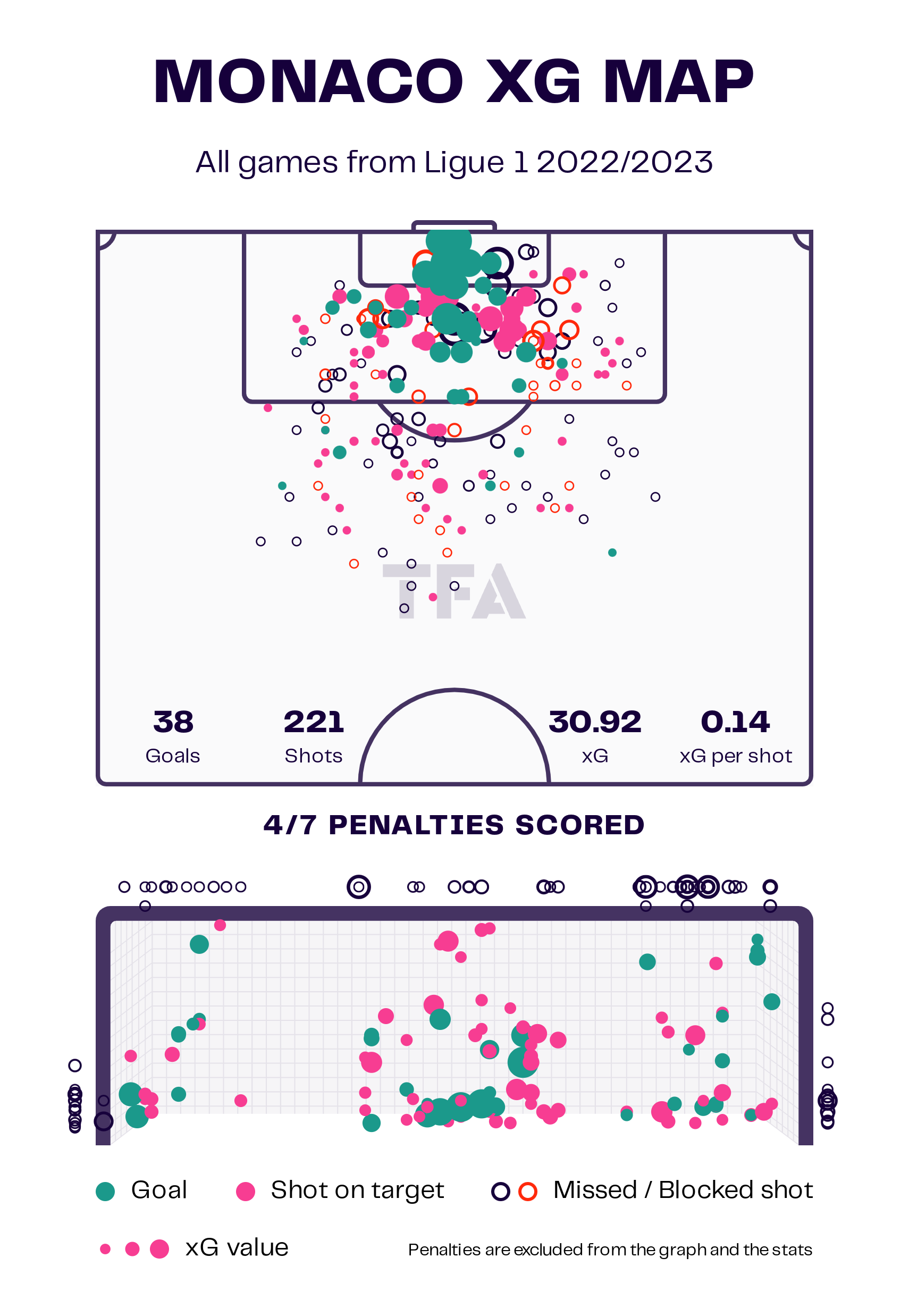 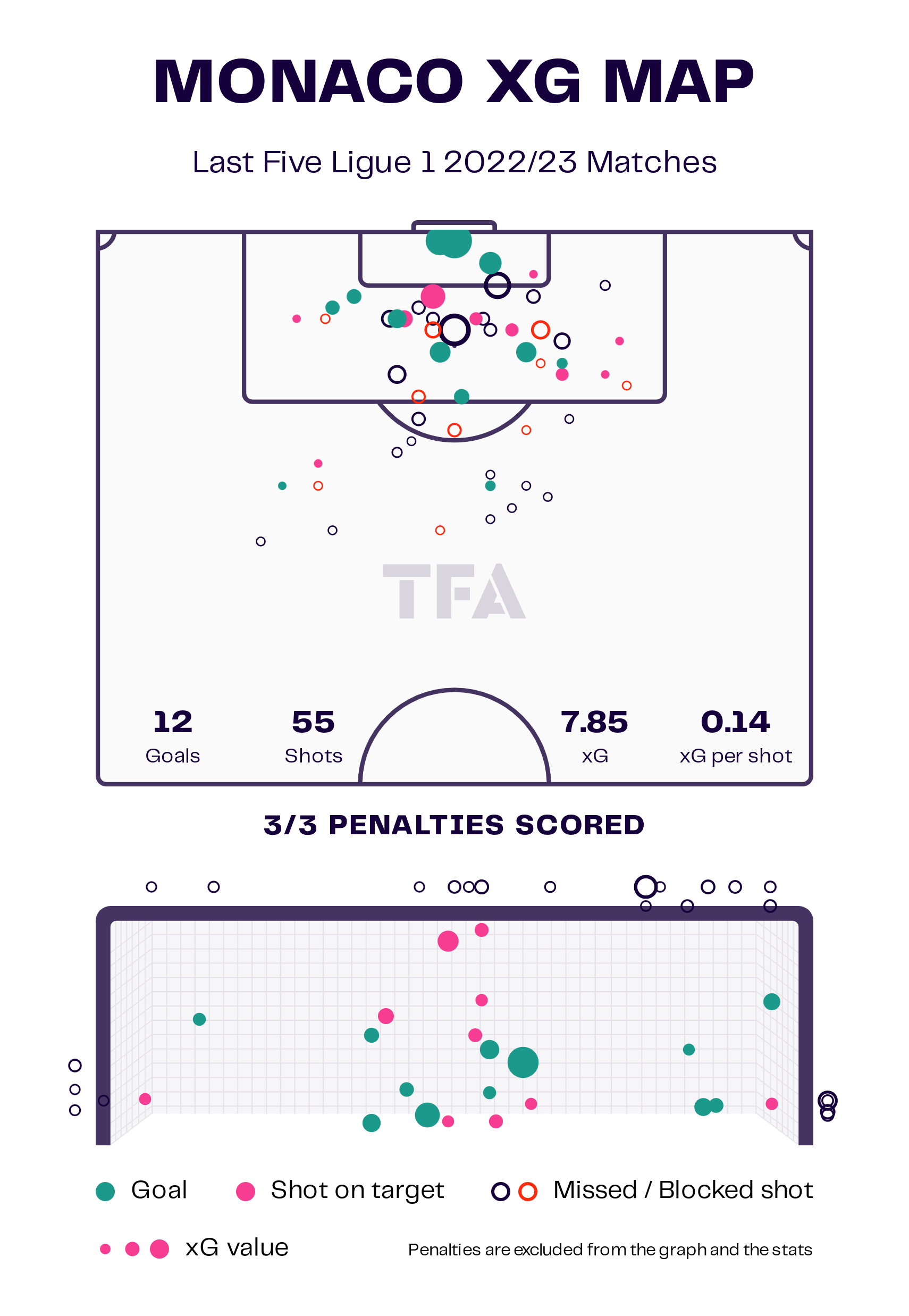 Monaco are currently in fourth place in the 2022–23 French Ligue 1, with 37 points from 19 matches played. They have scored 42 goals (30.92 xG) and conceded 26 goals (26.2 xGA). They have scored most of their goals from around the six-yard box. They have also managed to take quite a few shots on target from outside the box. They are successful in taking shots from hazardous locations inside the penalty box, which raises their xG. Monaco have an average xG of 1.91 this season and an average of 48.7% shot accuracy, taking 12 shots per 90 minutes.

In their last five games, the team has scored a total of 12 goals from 55 shots, putting them at an xG of 7.85 overall. Ten of the goals have come from inside the box, and the other two from long distance. The team has an xG per shot of 0.14. 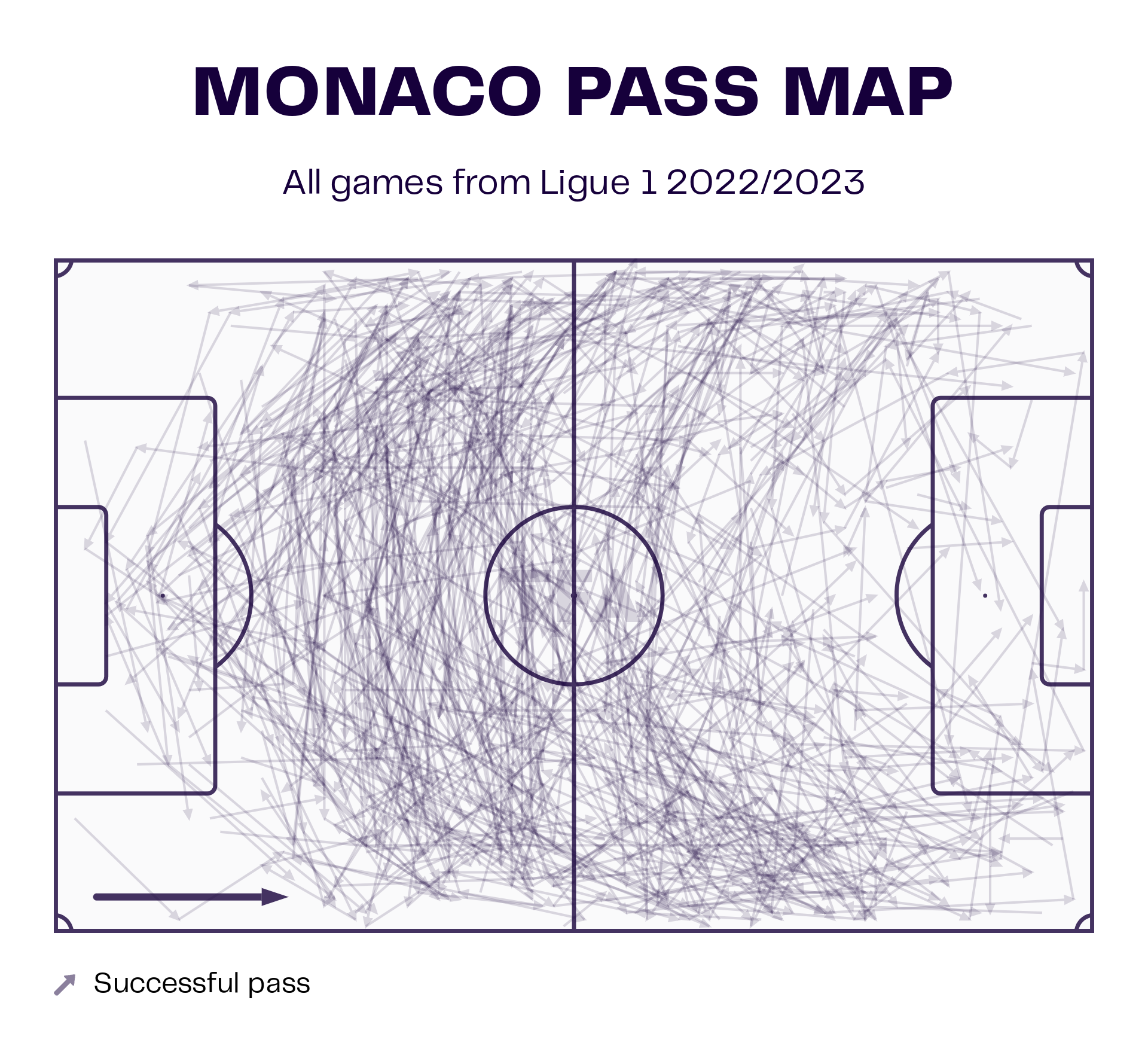 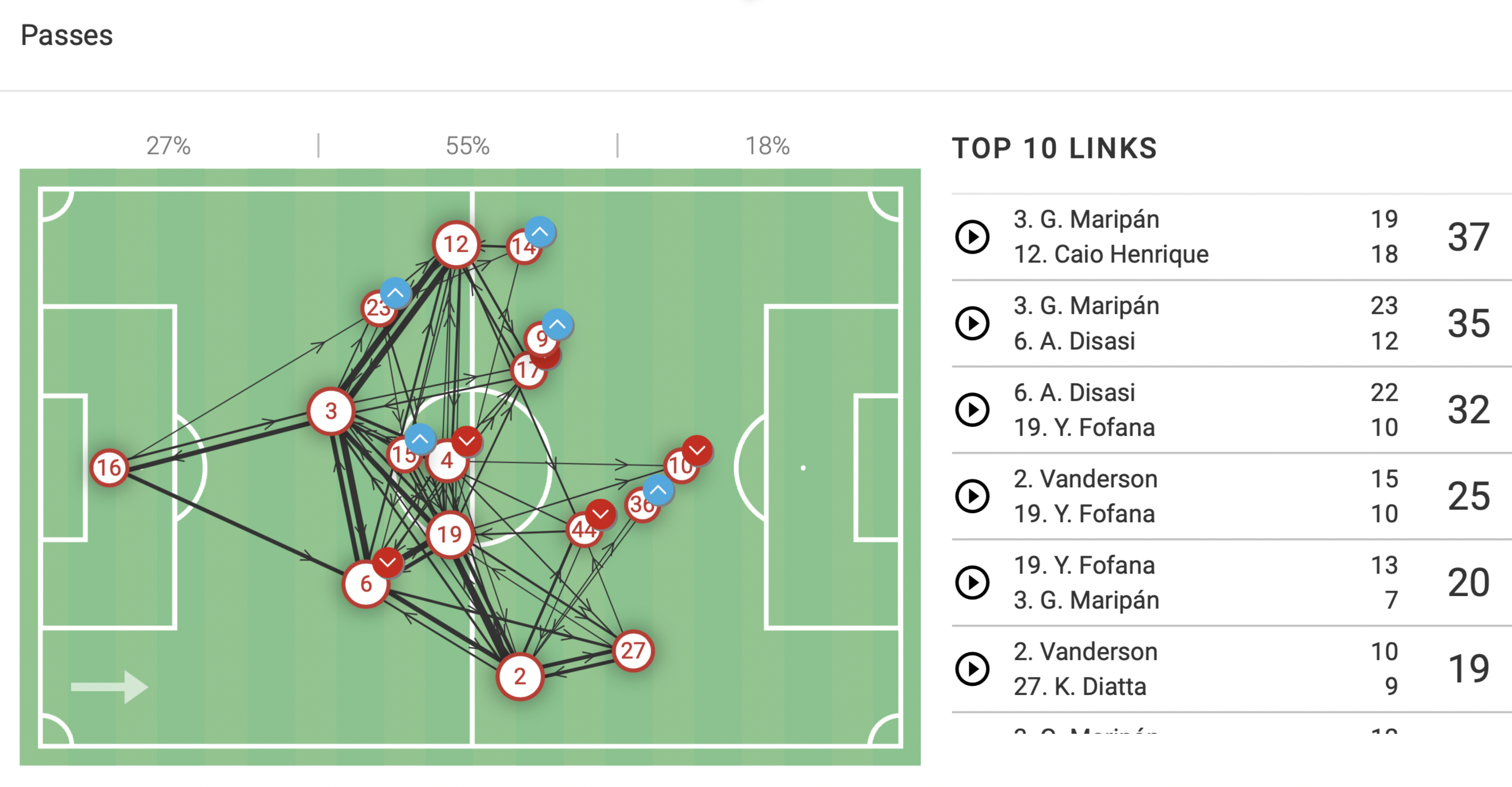 In their most recent Ligue 1 outing against Ajaccio, the team can be seen playing high up the pitch. They play with three at the back and make sure to maintain possession, averaging 65% possession for the 90 minutes. Additionally, they complete 545 passes out of a total of 624, having an 87% pass completion rate. The team took nine shots, of which eight were on target, against Ajaccio and managed to score three goals. They finished the match with a high xG of 3.24. 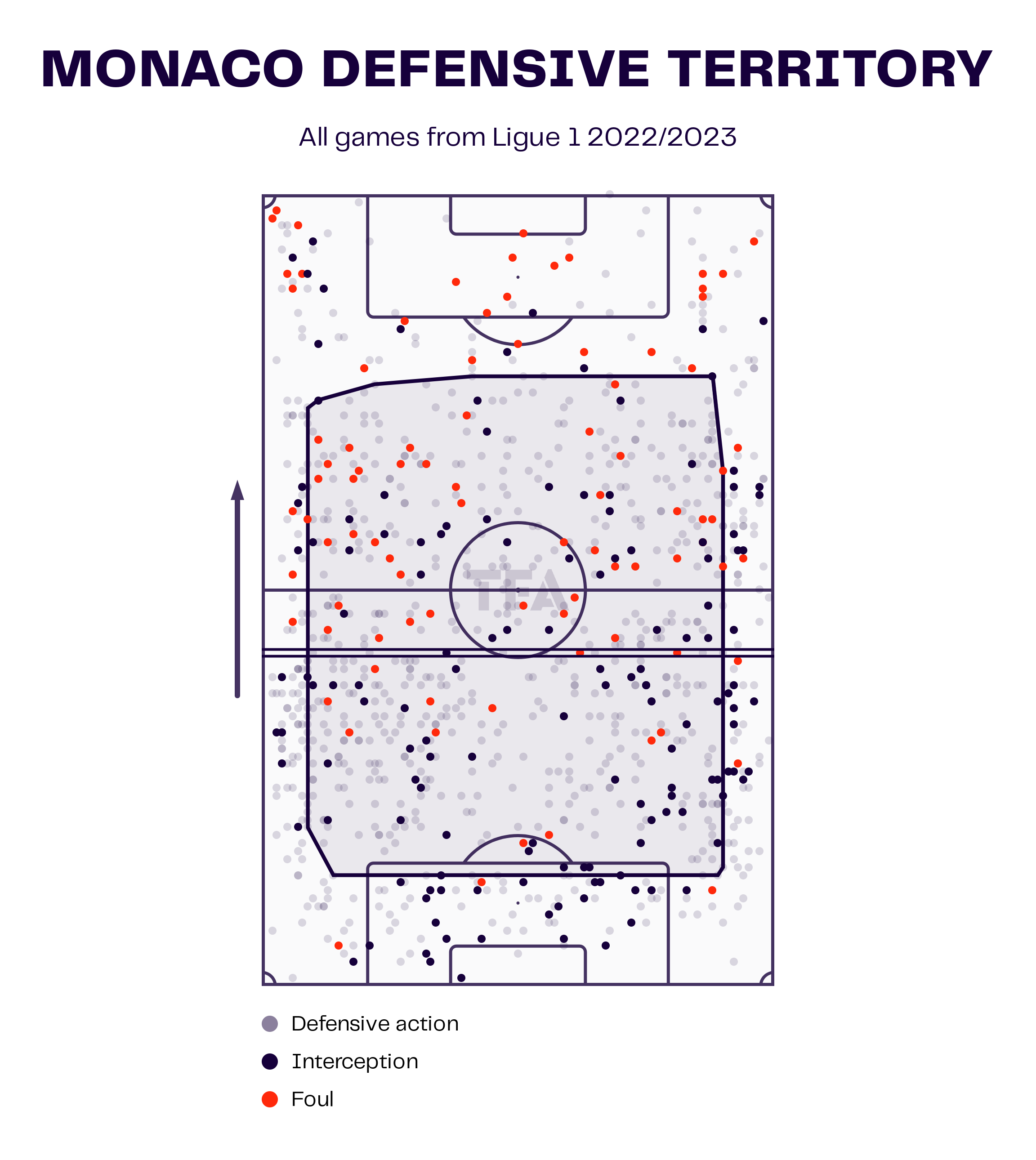 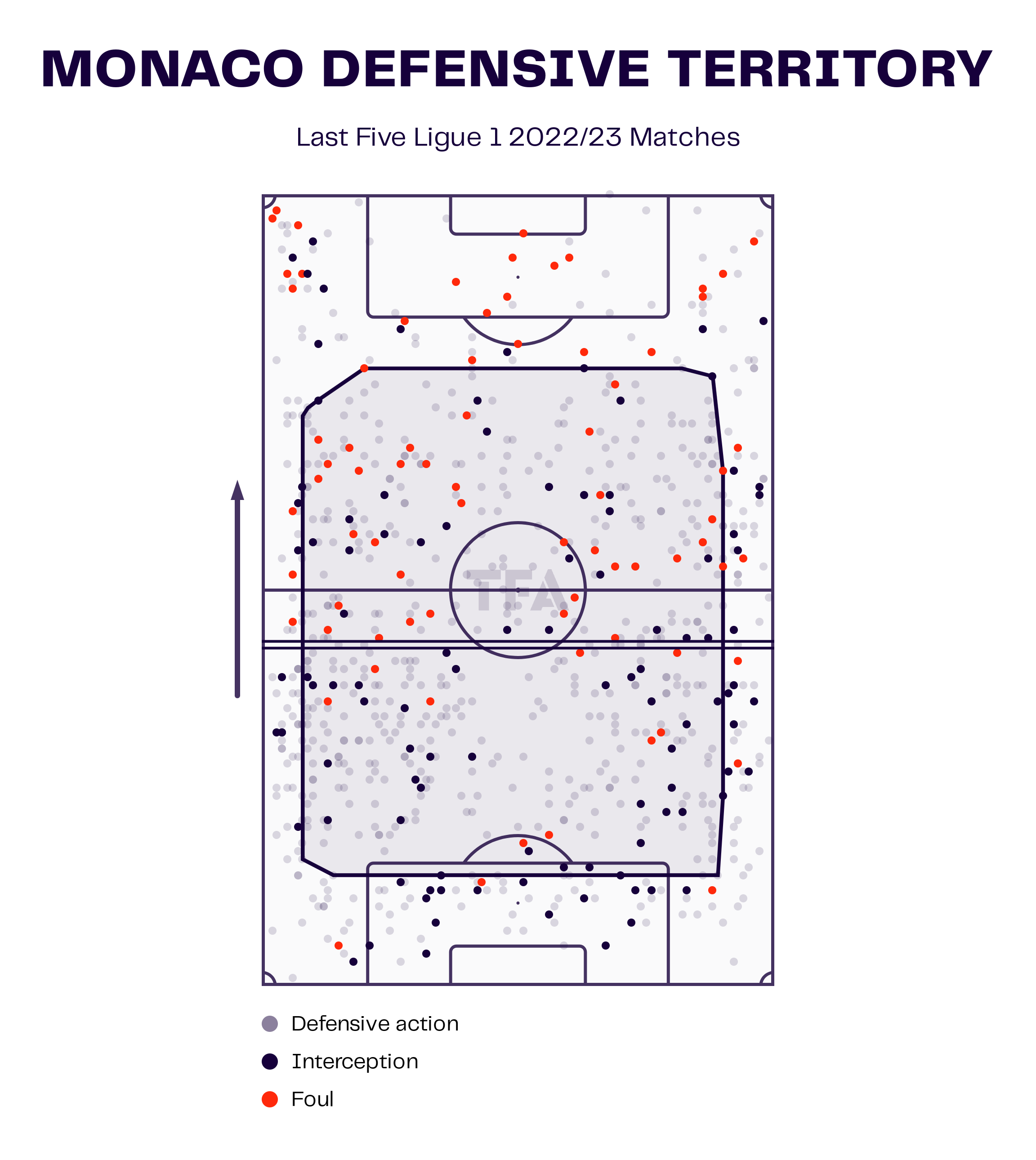 The graph above depicts the stats for Monaco’s defensive territory in Ligue 1 in 2022/23. They have 41.05 interceptions per 90 minutes. It indicates that Monaco are involved in a lot of defensive actions in the defensive third. The team gives up 13.6 fouls on average and wins 60.1% of their defensive duels. The team concedes 1.37 goals on average, which has been fairly decent compared to other teams in Ligue 1 this season.

Monaco have moved slightly up the pitch in their last five matches as compared to their overall defensive territory in the league this season. Their backline is positioned slightly higher up the pitch. It can be seen that the team has also committed most of their fouls in these matches. Monaco have conceded seven goals in their last five matches. Additionally, they are not finding much success in defence in the middle of the park, with teams being able to penetrate relatively easily from the centre. The team will look to fill this gap in the middle for their future matches.

Overall, Monaco is showing some strong performances this season. Recently, veteran Ben Yedder was the star as Monaco gave their push for European qualification a boost by winning 7-1 at home against struggling Ajaccio. Monaco will be hopeful of pulling off some European magic this season to bring home some epic football action for their fans. They seem equipped for the same based on their current form. It will be a tough race for the club; a long run still awaits, and Monaco will have to stay consistent in this run to achieve positive results.

Emiliano Sala plane crash: Pilot did not have required licence