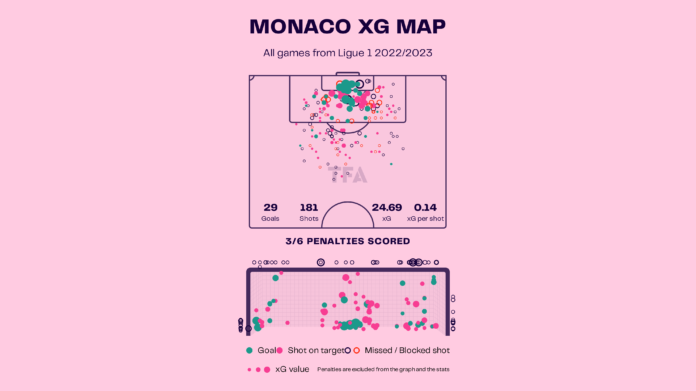 Monaco football club are nicknamed “Les Rouges et Blancs (The Red and Whites)”. They are currently in fifth place in the 2022/23 French Ligue 1, with 30 points from 16 matches played. They have won nine matches, drawn three, and lost four. They are in a good spot currently and are looking to step up next season by being involved in European competition. There are many teams in the league fighting for the European spot this season. It will require a mammoth effort and extreme consistency from Monaco in order to maintain and move up from their current position. Below are some stats depicting Monaco’s Ligue 1 2022/23 season. 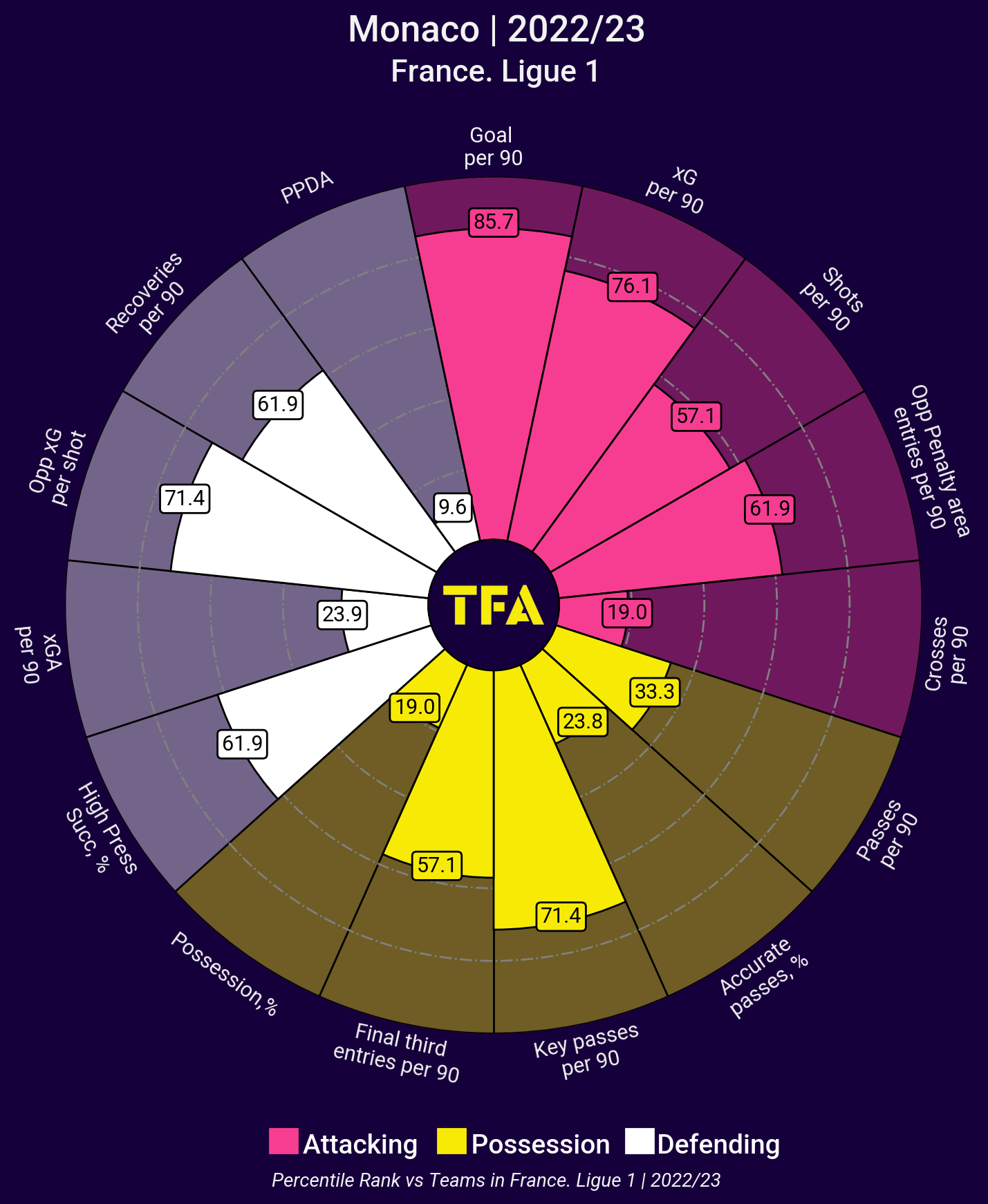 The above viz shows the percentile rank of the team in comparison to other teams in Ligue 1. It can be observed that Monaco are well ranked in the division. They are performing well in attack, with plenty to show for it. In terms of defence, Monaco are successful in putting high pressure on opponents. In the possession department, they are not able to maintain plenty of possession but are compensating in terms of key passes and final third entries. 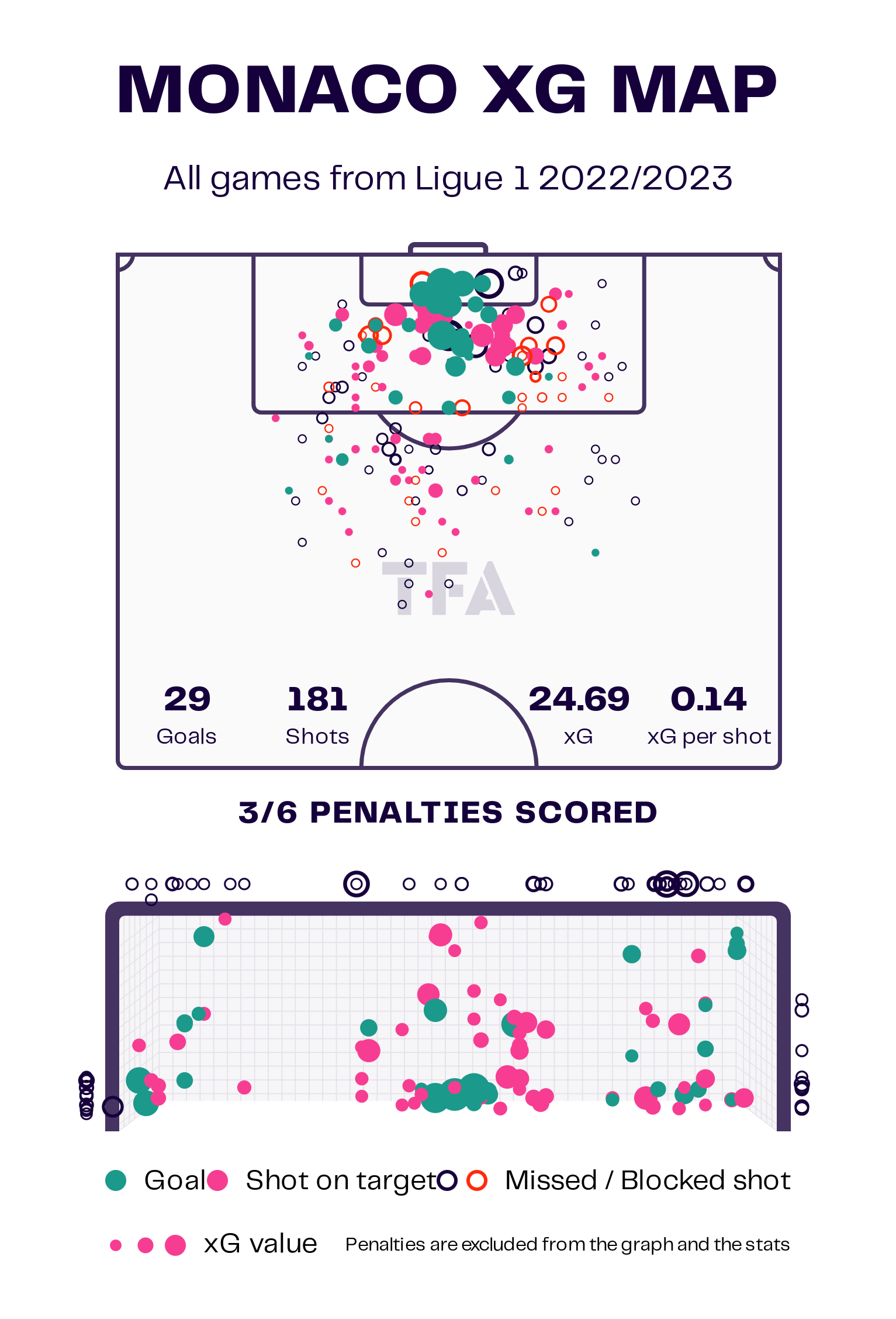 Monaco are currently in 5th place in the 2022–23 French Ligue 1, with 30 points from 16 matches played. They have won nine matches, drawn three, and lost four. They have scored 32 goals (25.2 expected goals (xG)) and conceded 23 goals (23.1 expected goals against (xGA)). In the above viz., it can be seen that they have made many attempts at goal from the six-yard box. They also have a few goals and shots on target from well outside the box. On average, they attempt 11.69 shots with 50.3% accuracy. 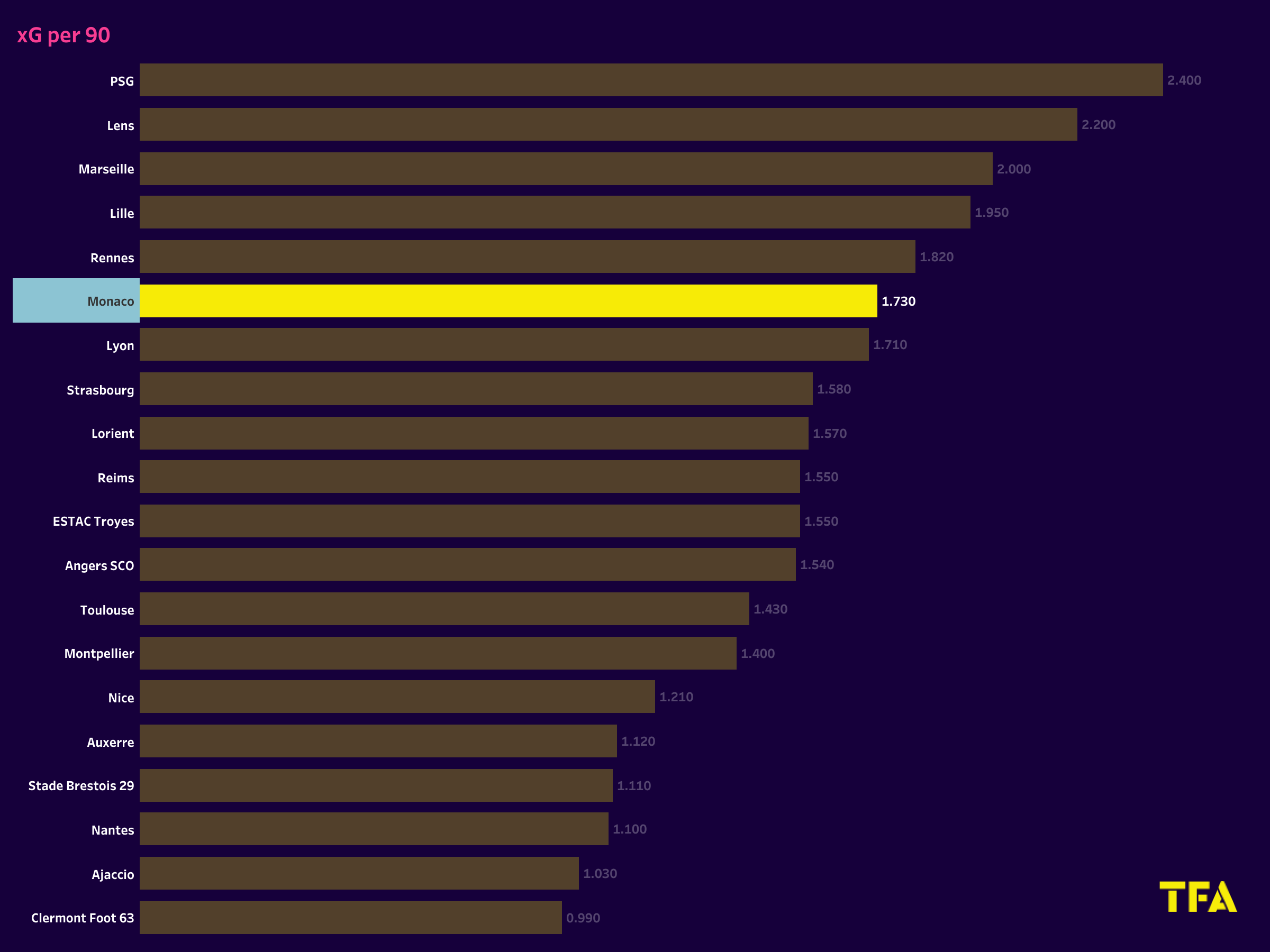 Monaco are ranked sixth in the team stats for xG per 90 in Ligue 1. They have an xG per 90 of 1.73. The other teams, which are ranked between first and sixth in the above graph, are also currently among the top six teams in the current Ligue 1 standings. Monaco are ranked fifth, while Lille is ranked sixth. They are averaging 12 shots per 90 minutes and scoring 1.9 goals per 90 minutes, with an average of 6.00 shots on target. 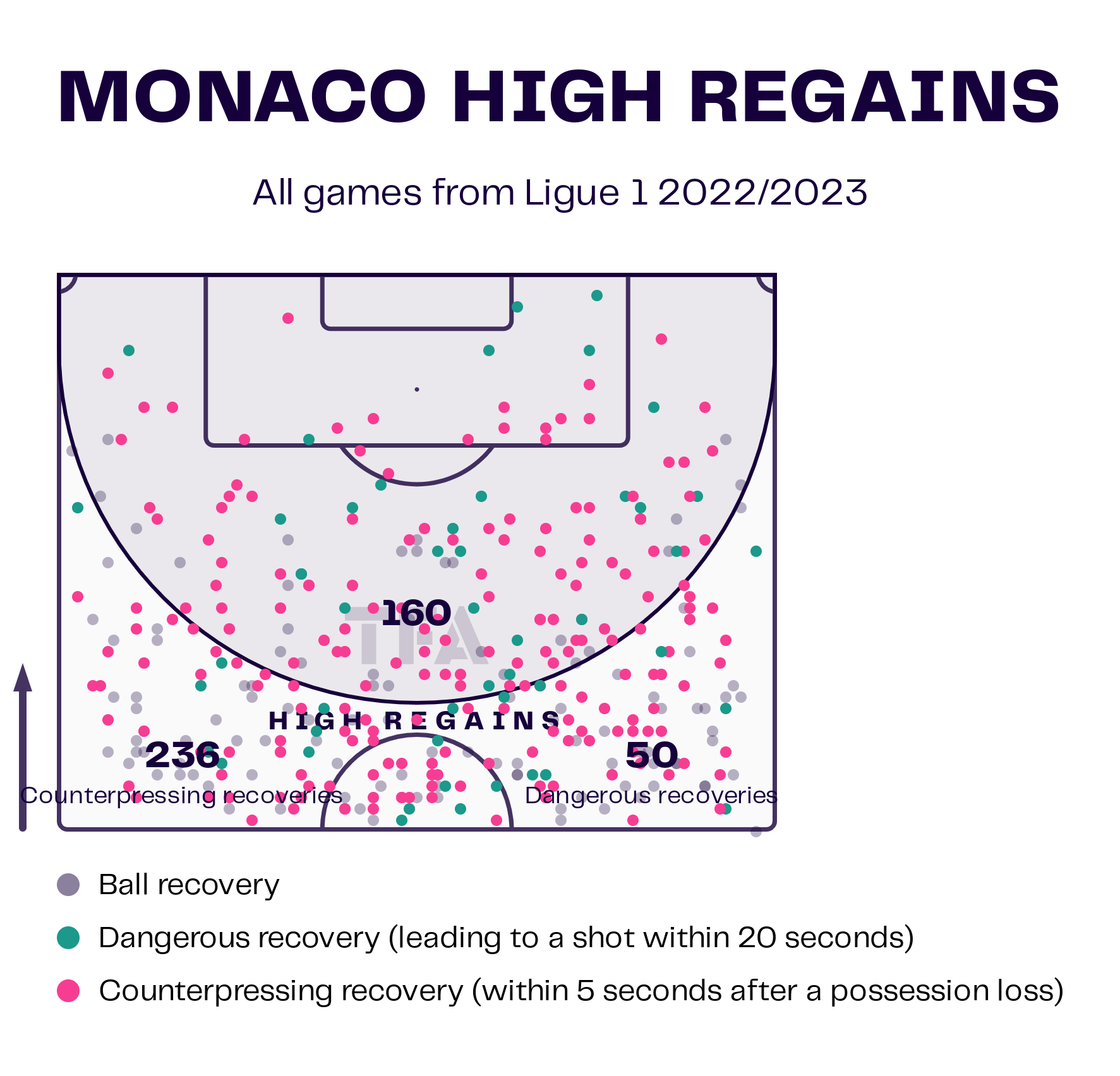 The above viz is a representation of the high regains made by the team in the current season. Monaco have made a total of 236 counter-pressing recoveries within five seconds of losing the ball. They have also made a total of 160 high regains in the final third of the pitch. In addition to that, they have made 50 dangerous recoveries leading to a shot within 20 seconds of getting the ball. Monaco are at the 61.9 percentile for a high press success rate in the league, which is decent. They average 2.3 tackles per 90 in the attacking third, 7.06 in the middle, and 7.06 in their defensive third. In addition, they average 81.38 recoveries per 90. 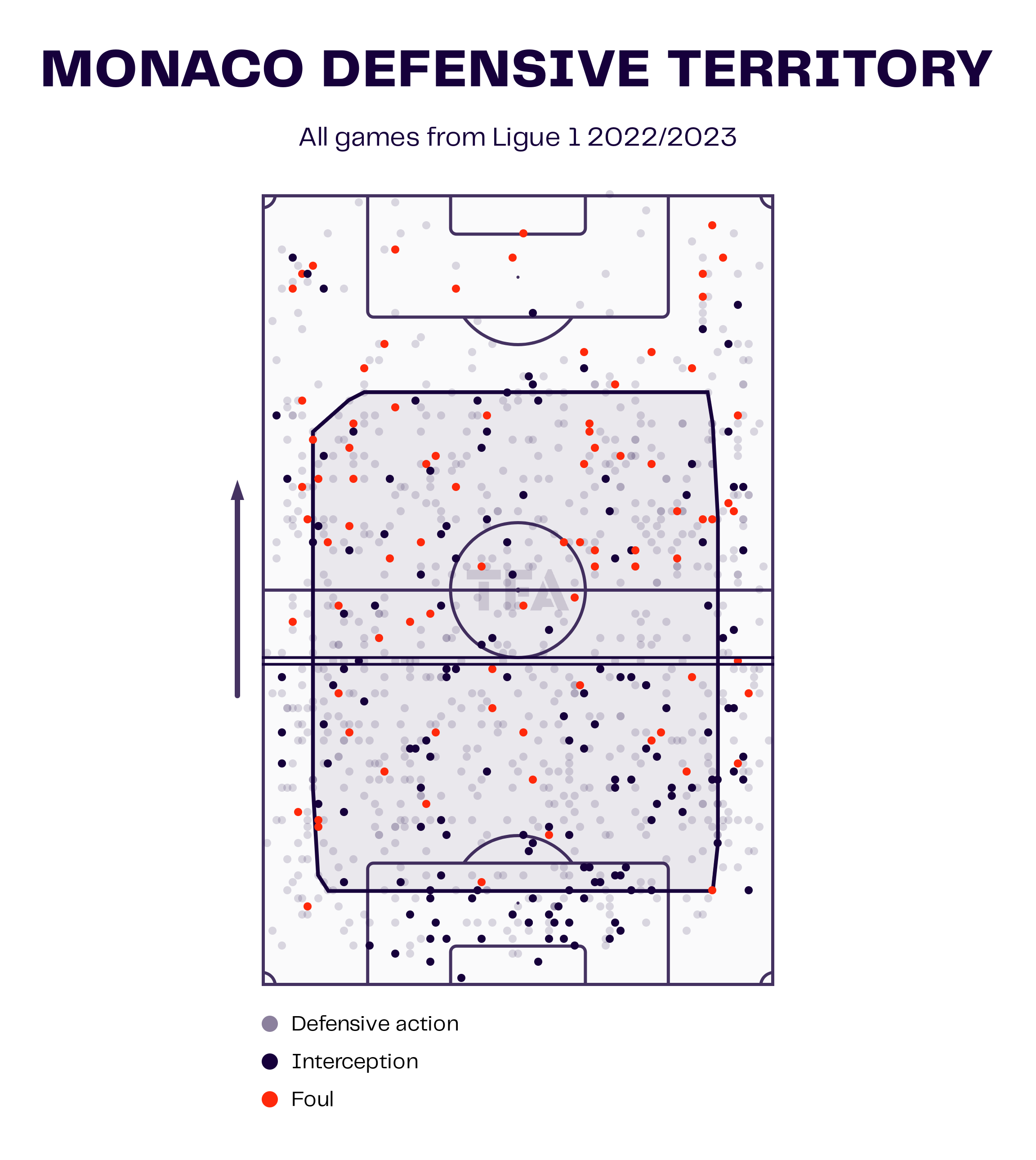 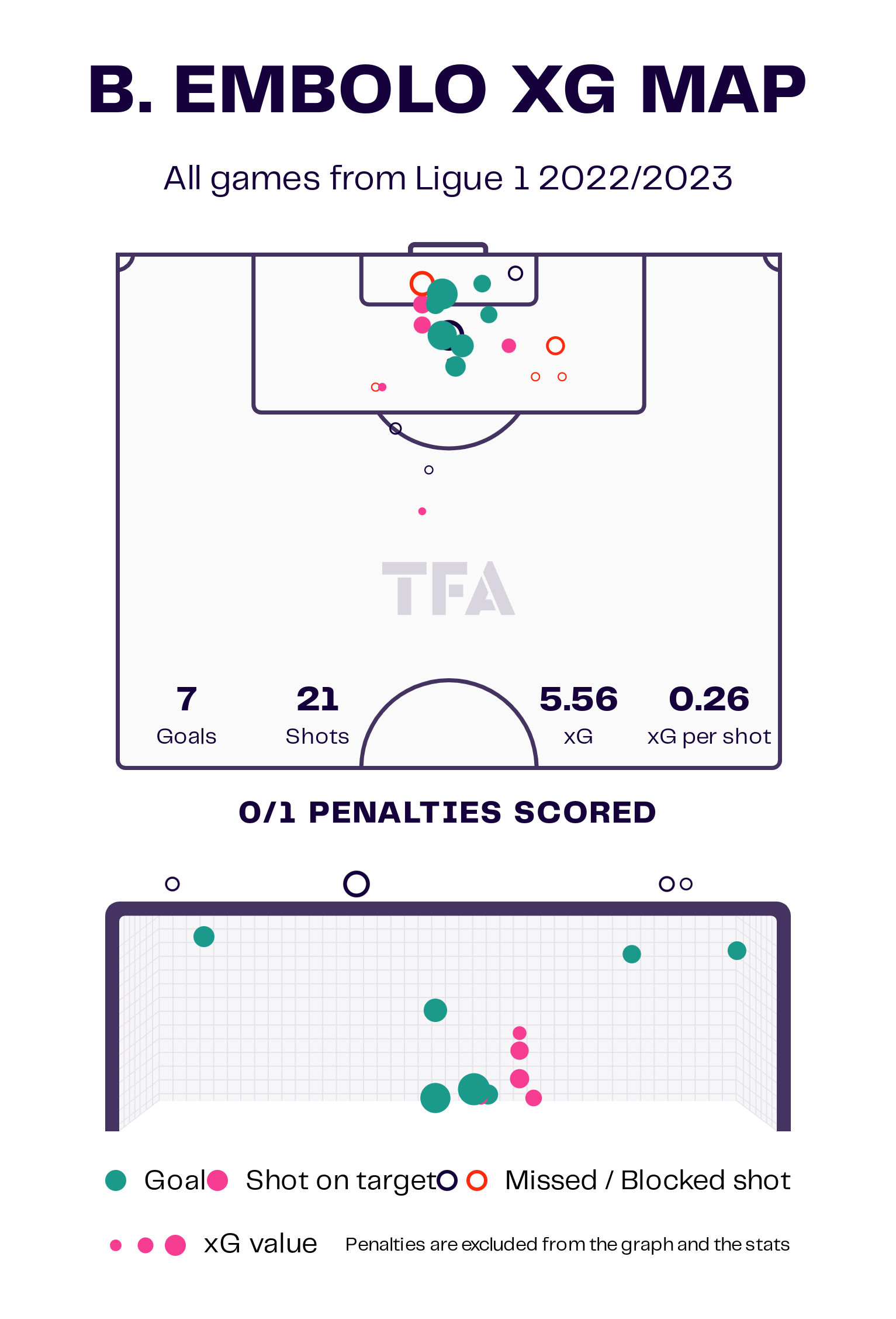 Breel Embolo has been a crucial part of Monaco’s attack. In the French Ligue 1 season 2022/23, Breel Embolo has played 14 matches (plus two as a sub). They have 12 shots on target from a total of 21 shots and have scored seven goals (5.57 xG). Breel Embolo averages 17 passes per game, has a 69% pass completion rate, and has two assists. All of his goals have come from inside the box.

Overall, Monaco is showing some strong performances this season. Recently, teenager Ben Seghir was the star as Monaco gave their push for European qualification a boost by winning 3-2 away at struggling AJ Auxerre. Monaco will be hopeful of pulling off some European magic this season to bring home some epic football action for their fans. They seem equipped for the same based on their current season so far. It will be a tough race for the club; a long run still awaits, and Monaco will have to stay in this marathon till the end if they are to achieve any benefits.

Stade Brestois reveal they turned down move for Yaya Toure