This season in Ligue 1, Montpellier’s form is poor overall with five wins, two draws, and ten losses. This performance currently places Montpellier 14th out of 20 teams in the Ligue 1 table, winning 29% of matches. Montpellier’s home form is poor, with the results being three wins, one draw, and five losses, and their away form is considered poor as a result of two wins, one draw, and five losses. Montpellier have scored a total of 27 goals this season in Ligue 1. Montpellier have also struggled to perform in Ligue 1 this season and currently finds themselves in the bottom half of the French top flight. They picked up a two-nil win over Lorient on their return to domestic action last week before suffering a two-one home defeat to third-placed Olympique Marseille in their first game of the year. The team finished 13th last season and is currently four points off the relegation zone. Below are some stats stating why they are close to relegation in Ligue 1 this season. 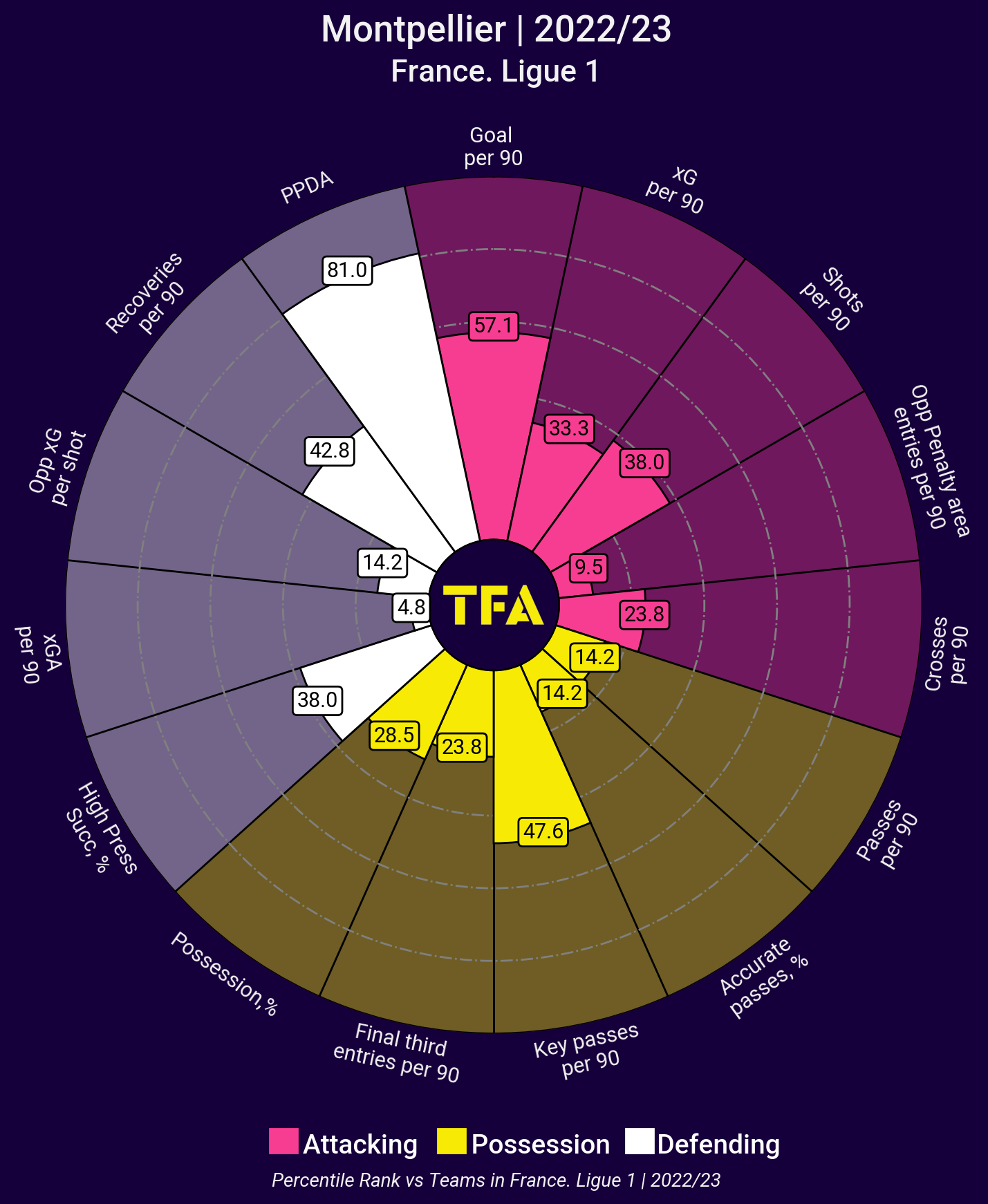 The above viz shows the percentile rank of the team in attacking, defensive, and possession stats compared to other teams in the French League. We can clearly observe that Montpellier are ranked at the bottom in the defensive stats, especially for high-pressing success. They are ranked poorly in attacking displays, which has led to an unsuccessful start. Montpellier have a low xG rate of 1.40 per match. The area where they have excelled is in making recoveries, but their overall performances have led to them hovering above the relegation zone. 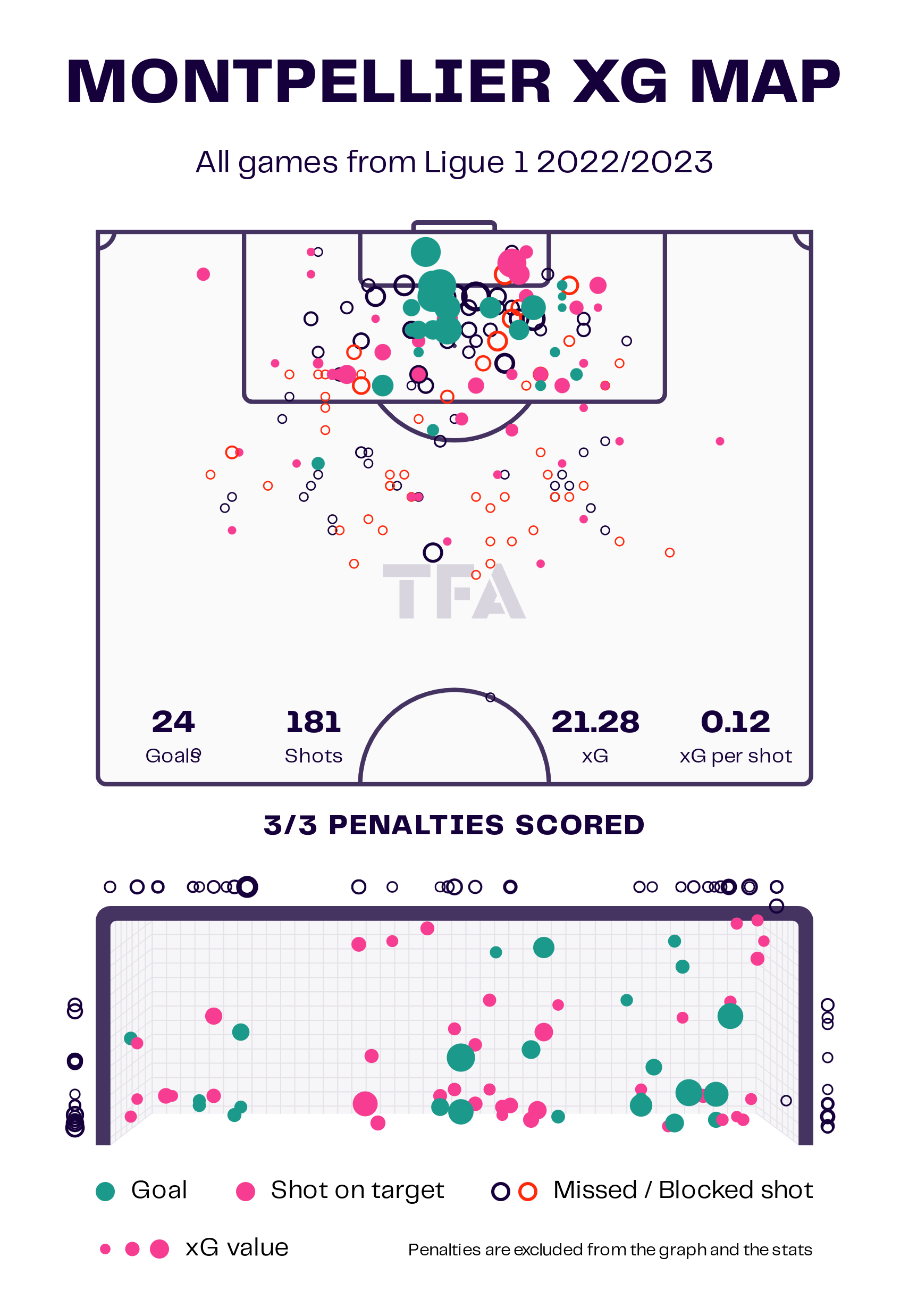 Montpellier are currently in 14th place in the 2022–23 French Ligue 1, with 17 points from 17 matches played. They have won five matches, drawn two, and lost ten. They have scored 27 goals from 181 shots attempted (21.28 expected goals (xG)) and conceded 31 goals (27.5 expected goals against (xGA)). Most of their goals have come from inside the box, and the team has an xG per shot of only 0.12. The team ranks among the bottom six teams in Ligue 1 for xG per 90 minutes, which is not a good sign for them. This puts them in the danger zone. Angers, who are at the bottom of Ligue 1, have a higher xG per 90 compared to Montpellier. The team is not able to bag the points when needed, and this may go on to haunt them in the final stages of the season. Montpellier are at an average rank when it comes to their efficiency in attack and the above benchmarking shows where they stand currently in Ligue 1 as compared to other teams. Montpellier are currently at 16% counterattacking efficiency, making 2.47 counterattacks per 90, with 28.7% of them ending in shots. They perform 24.53 positional attacks per 90, whereas their opponents are averaging 33 positional attacks this season. Their lack of efficiency in attack is one of the major factors behind them not being higher in the league standings and being placed just four points above relegation.

Entries into the final third 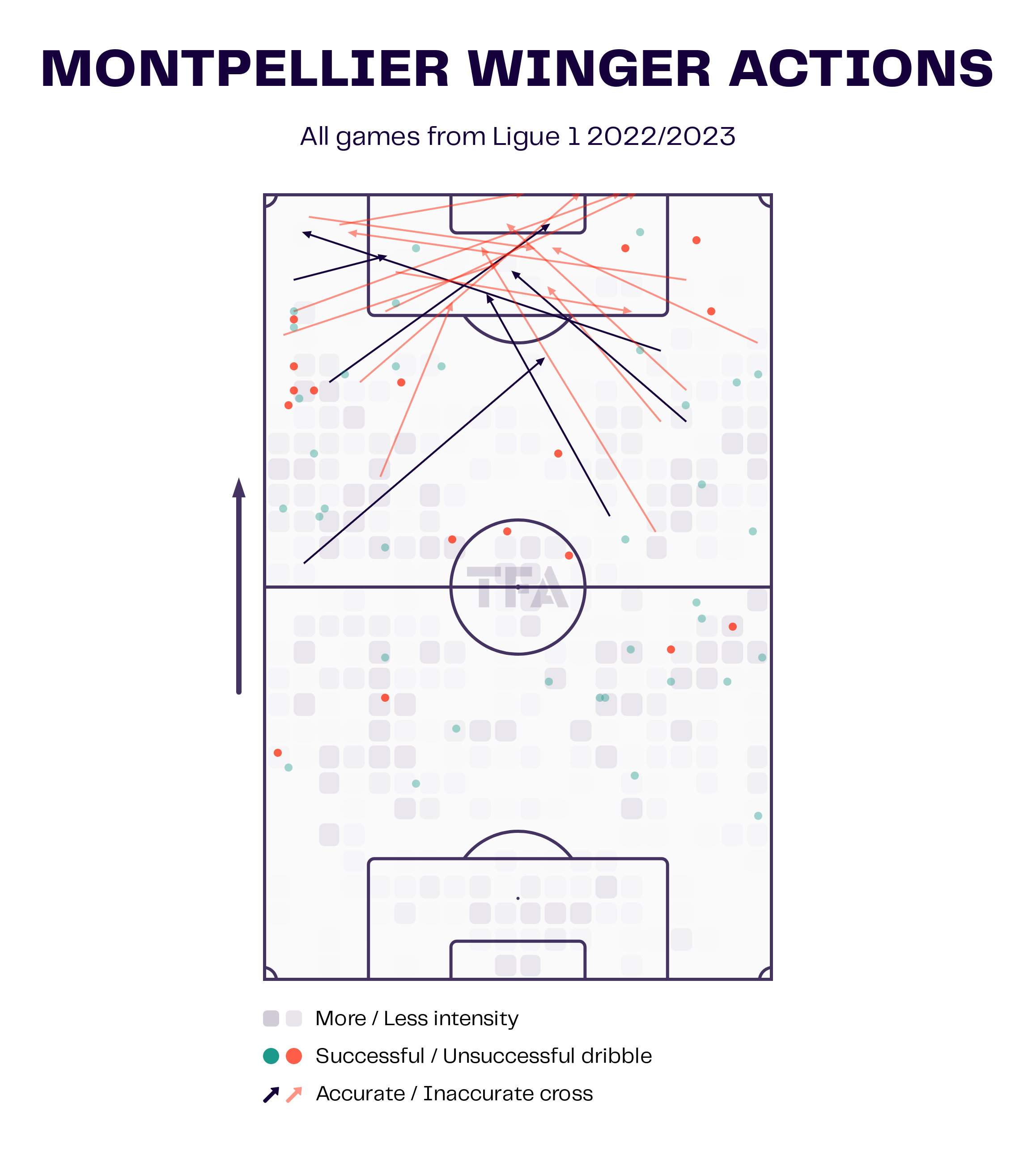 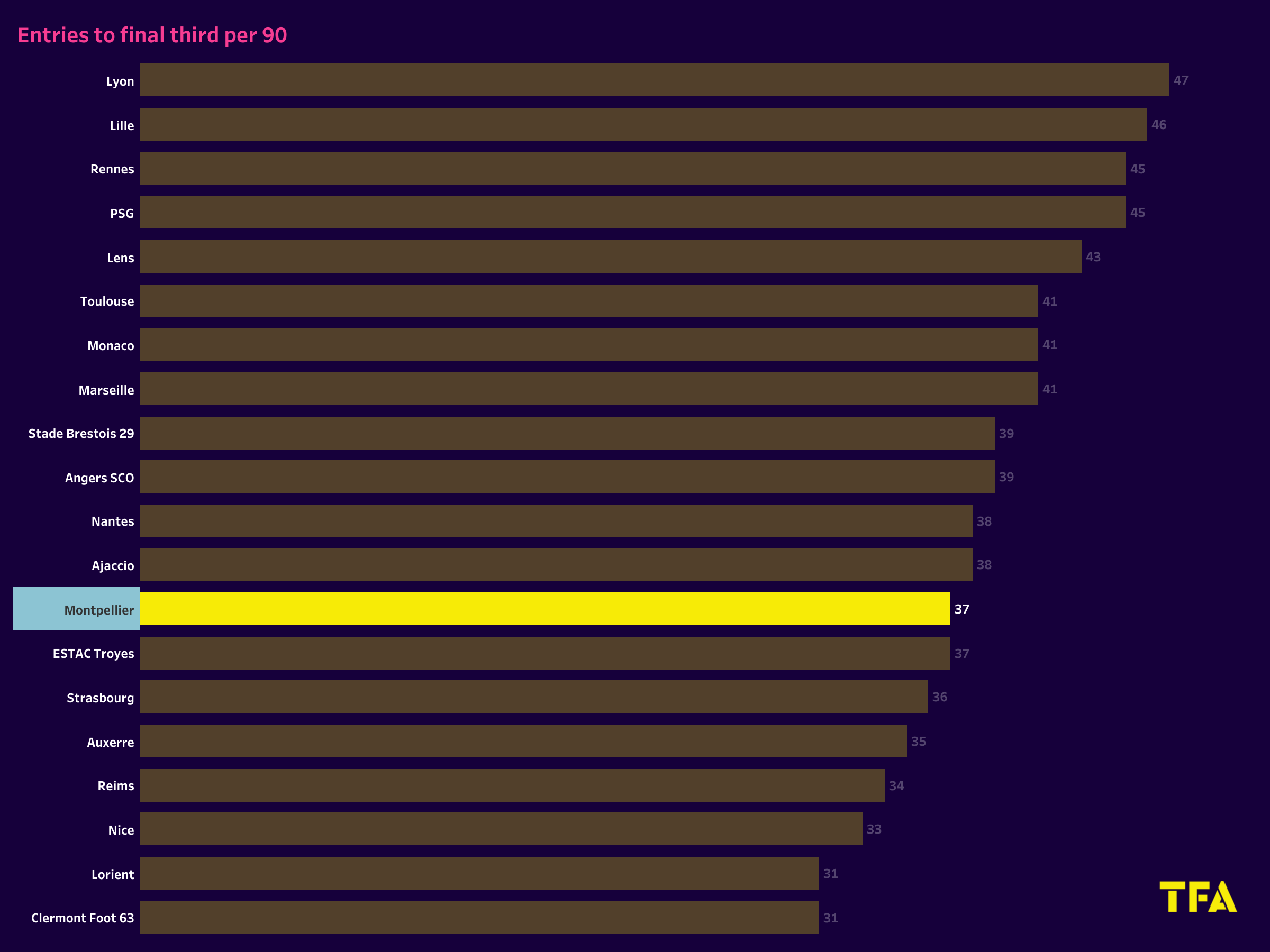 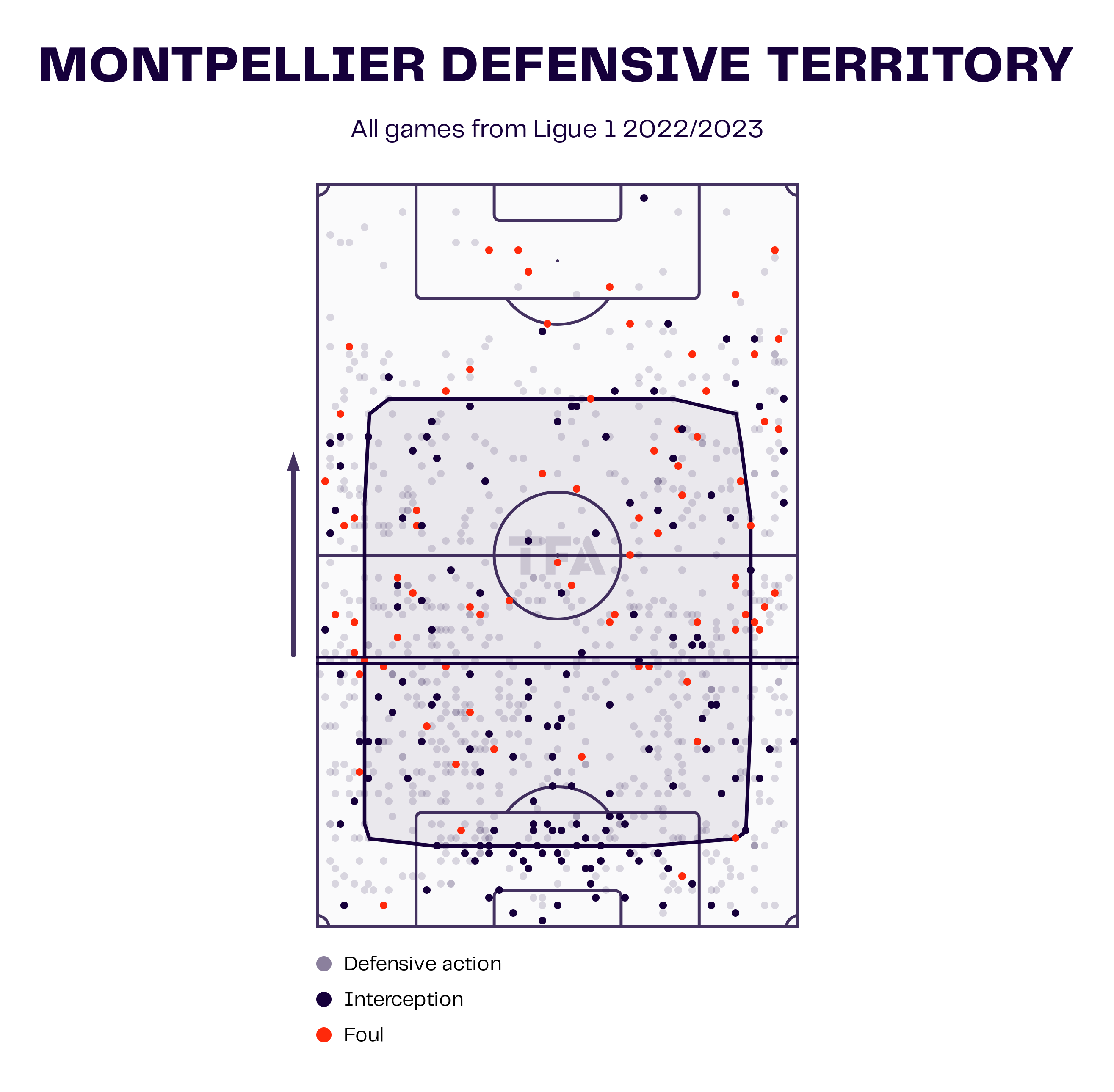 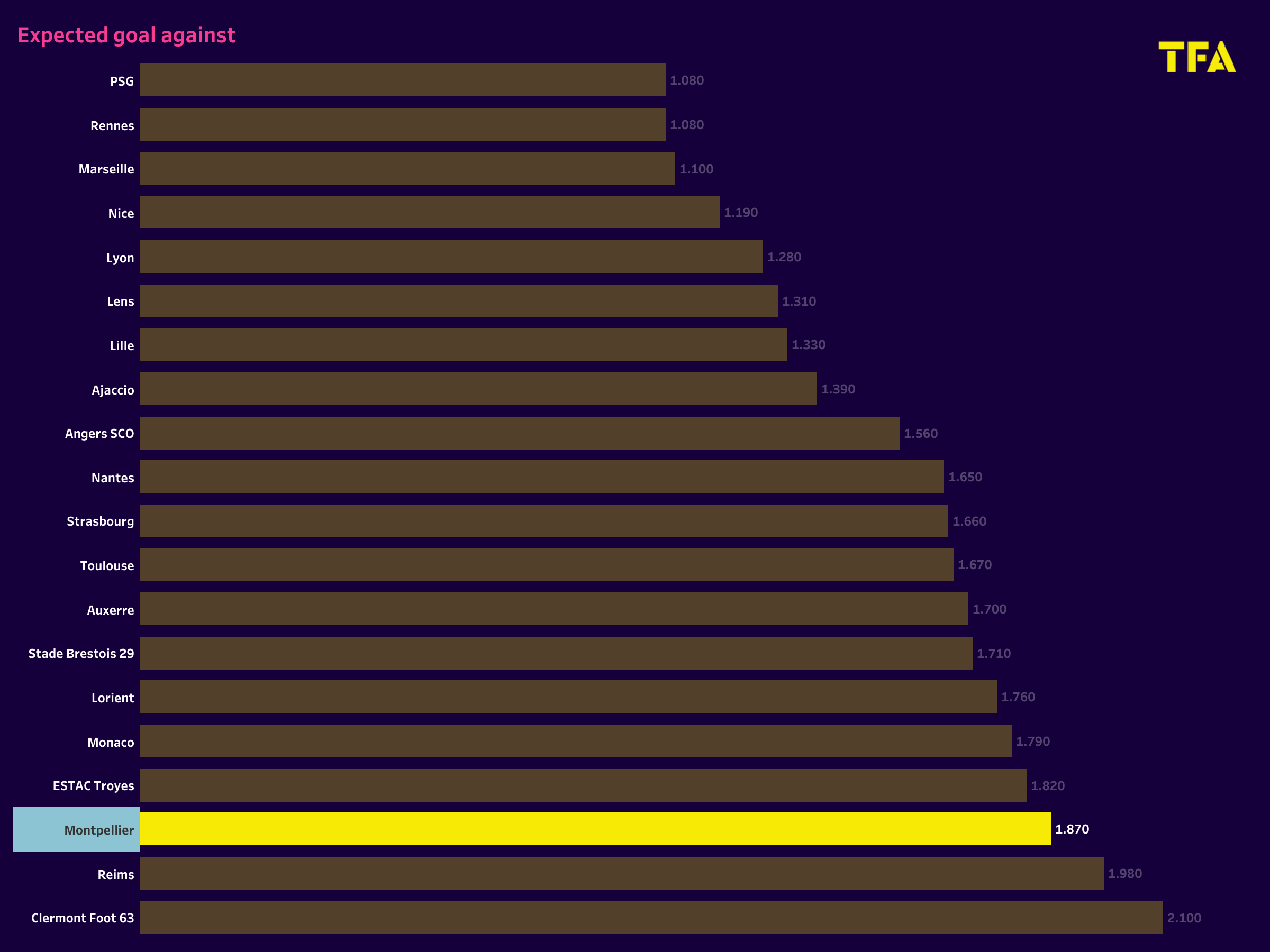 The above viz shows the defensive territory of the team. It indicates that Montpellier are involved in a lot of defensive actions in the defensive third, and the team makes 42.76 interceptions per 90. They have committed numerous fouls in their half, including a few in the box, and average of 11.94 fouls. The team makes 78 recoveries and attempts 205.12 duels on average, with a win rate of 49.5 per cent. Defensively, they possess numbers that are similar to those of their opponents in the current season, but they still have work to do in the department of goals conceded on average, as they let in 1.87 goals as compared to their opponent’s 1.59 goals conceded per 90 minutes. They have ranked among the bottom three clubs in Ligue 1 for expected goals against per 90 minutes, which is a major reason for their poor standing in the table. 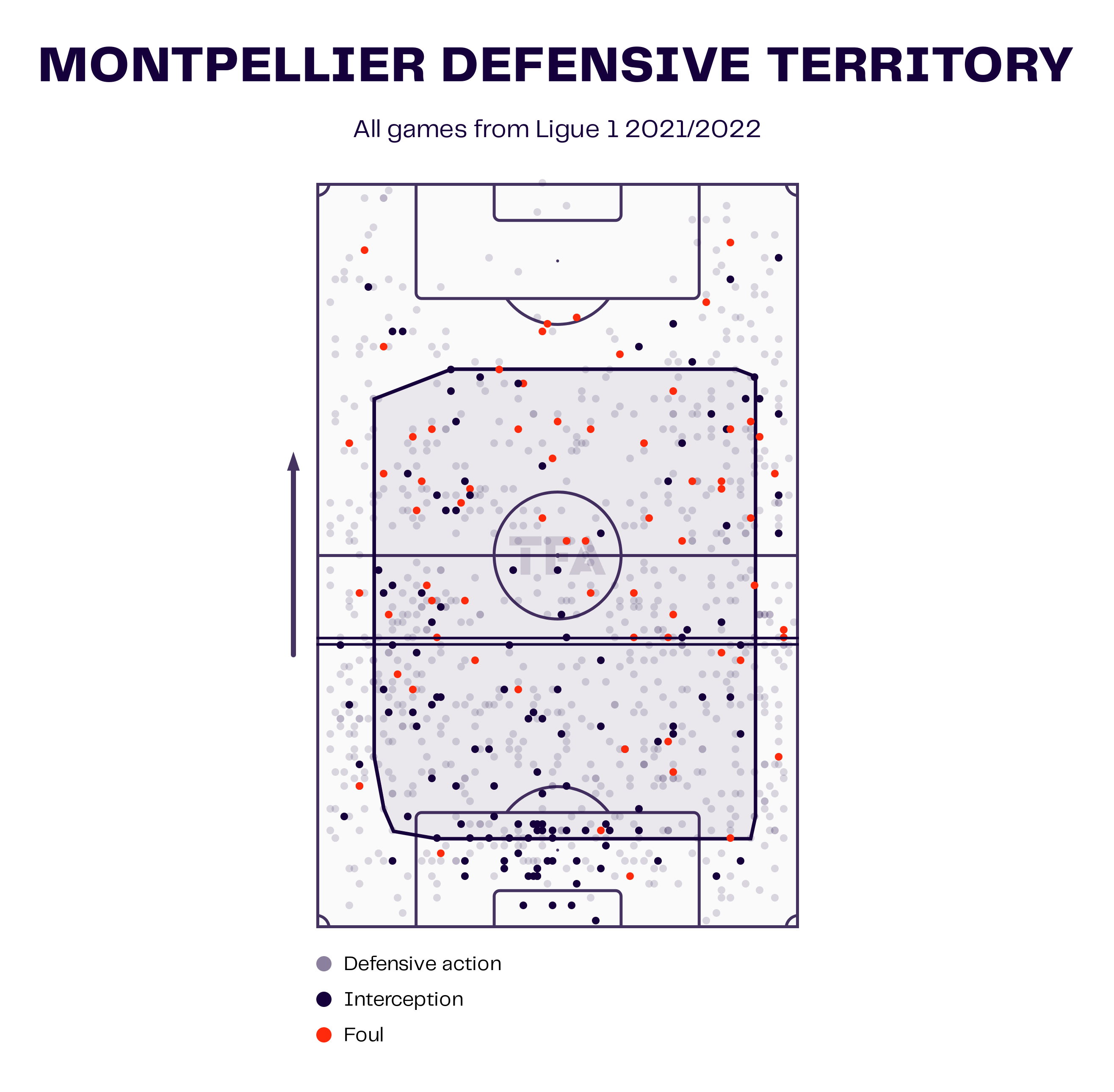 Montepellier conceded a total of 61 goals last season, which was the sixth most in the Ligue 1 2021/22 season. The team conceded 1.61 goals per 90 minutes as compared to 1.26 goals let in by their opponents. Additionally, the team had 14.92 shots taken against them per match, whereas they took only 10.66 shots. This season, Montepellier averages 10.81 shots per 90 minutes while facing 13.42 shots from opponents.

Overall, the team needs to make a lot of improvements, especially in attack, in order to rack up some points in their upcoming matches in the league. They are very close to relegation, and a few bad results might see them sitting in one of the spots in no time. They will face 11th-placed Nice away from home in their next outing, and both teams will be looking to seal all three points. It is going to be a long, restless season for Montpellier as they struggle to perform and hover close to relegation.

PSG president confident his name will be cleared