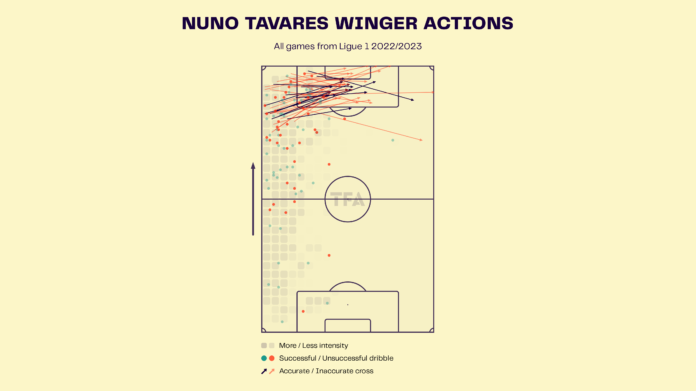 Nuno Tavares, a left-back at Marseille, has taken advantage of his chance in France to develop into one of the league’s most unpredictable and dangerously offensive wing-backs. Arsenal once again trusted Ligue 1 and Marseille with one of their most promising defensive prospects. Tavares has played every minute of Marseille’s European games this season, giving him more UEFA Champions League experience than his parent club. His performance in Europe sums up a larger trend that is also evident in Ligue 1. Below are some stats behind Nuno Tavares’ growing form for Marseille this season. 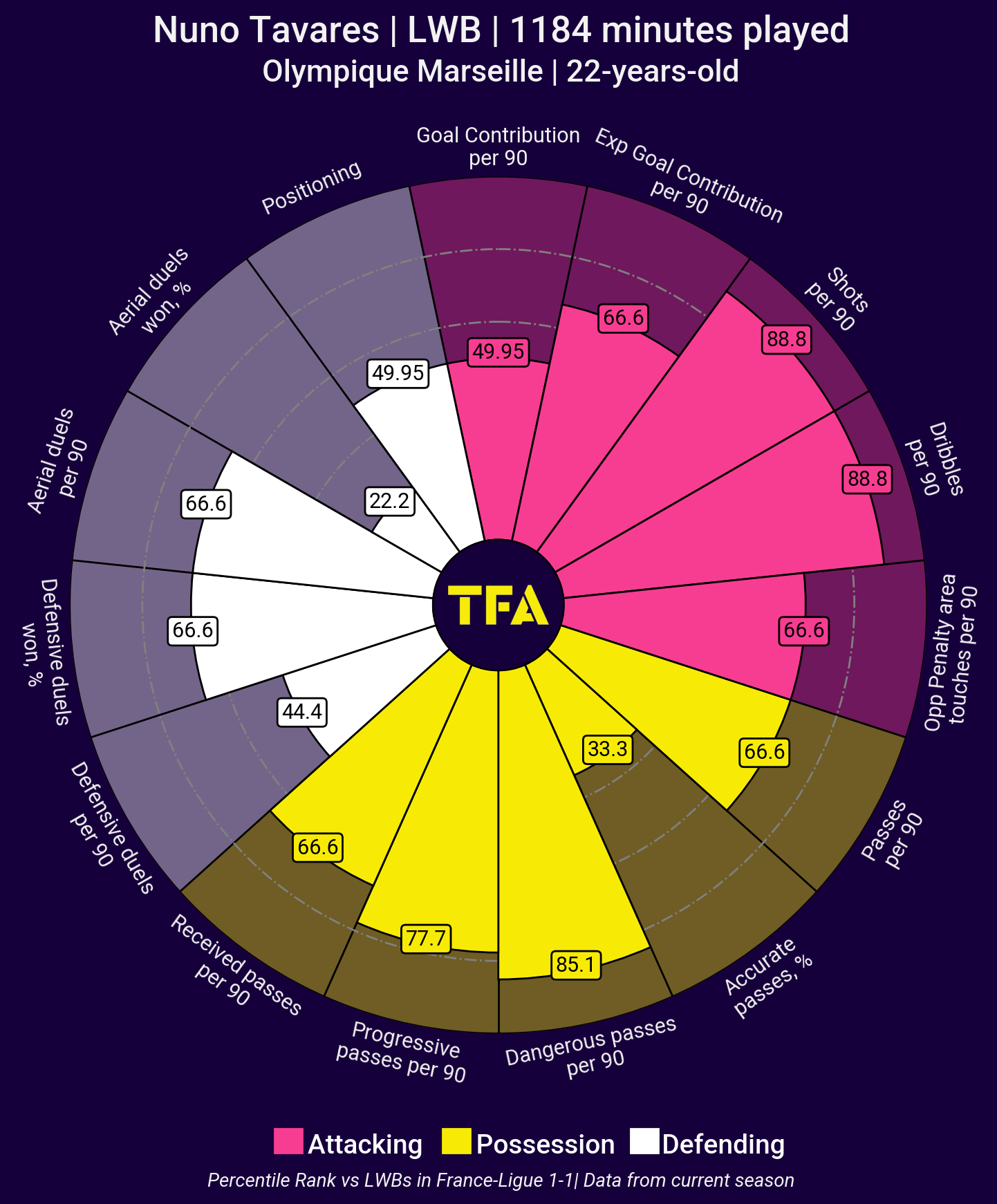 The above viz shows the percentile rank in comparison to the other left-wing backs in Ligue 1. Nuno Tavares’ offensive capabilities have been significant for Marseille. He is ranked highly for shots, dribbles, and touches inside the opposition’s penalty area for Marseille. He is ranked high for dangerous passes per 90, and this has been a crucial advantage for the player and his team. Nuno is decent in defensive duels and aerial duels as a left-back in Ligue 1.

Skilled with the ball 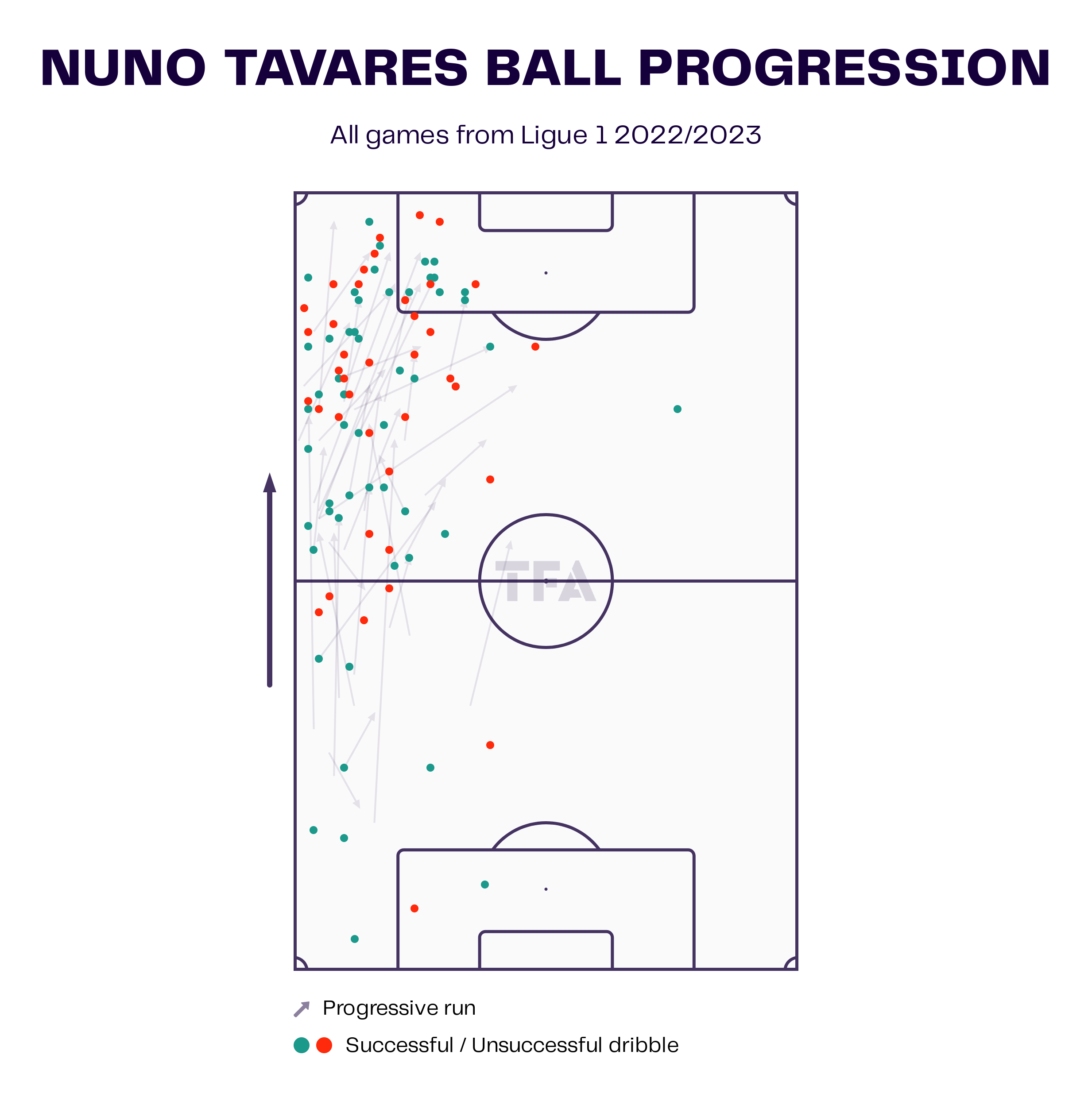 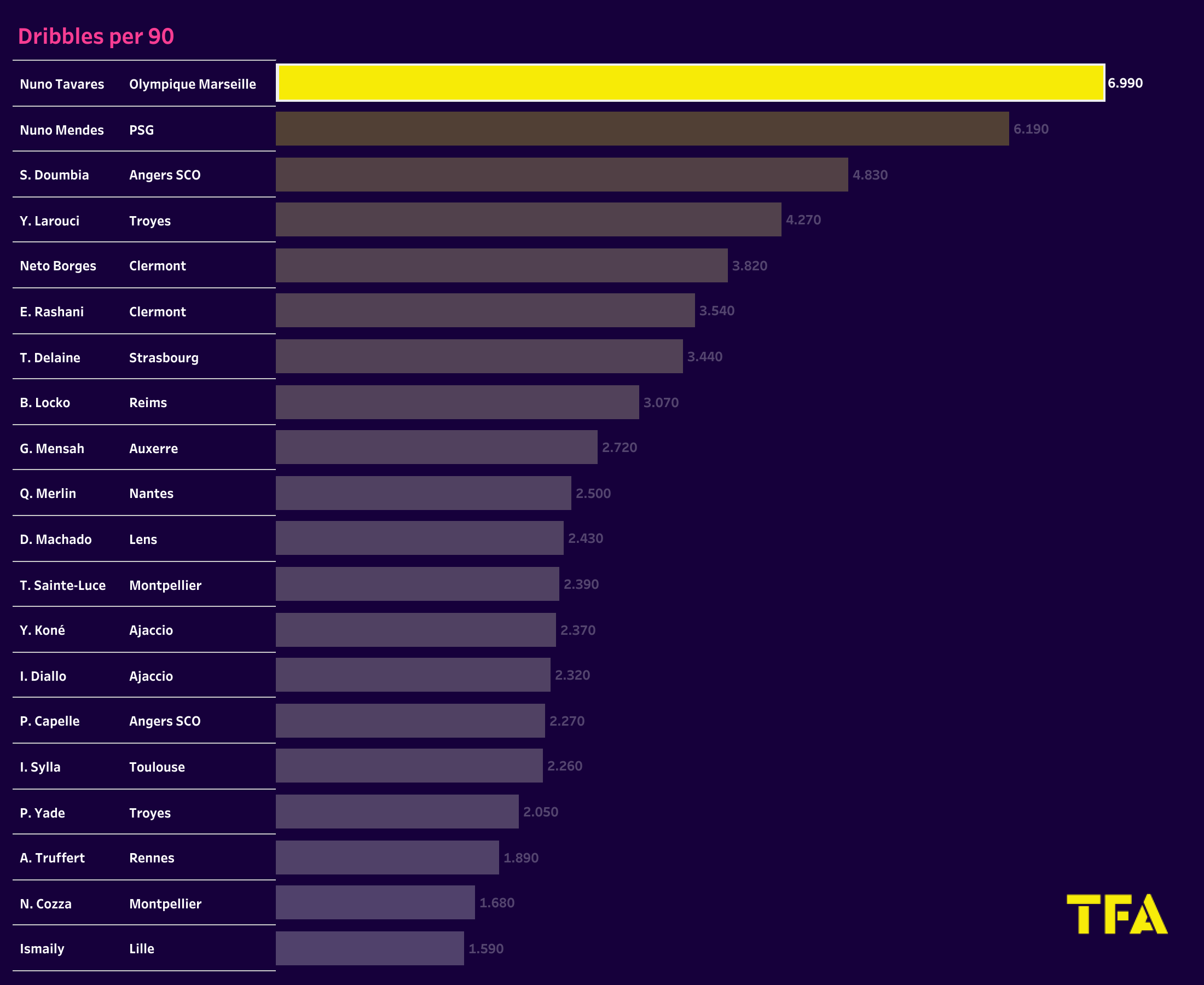 Flank from the left 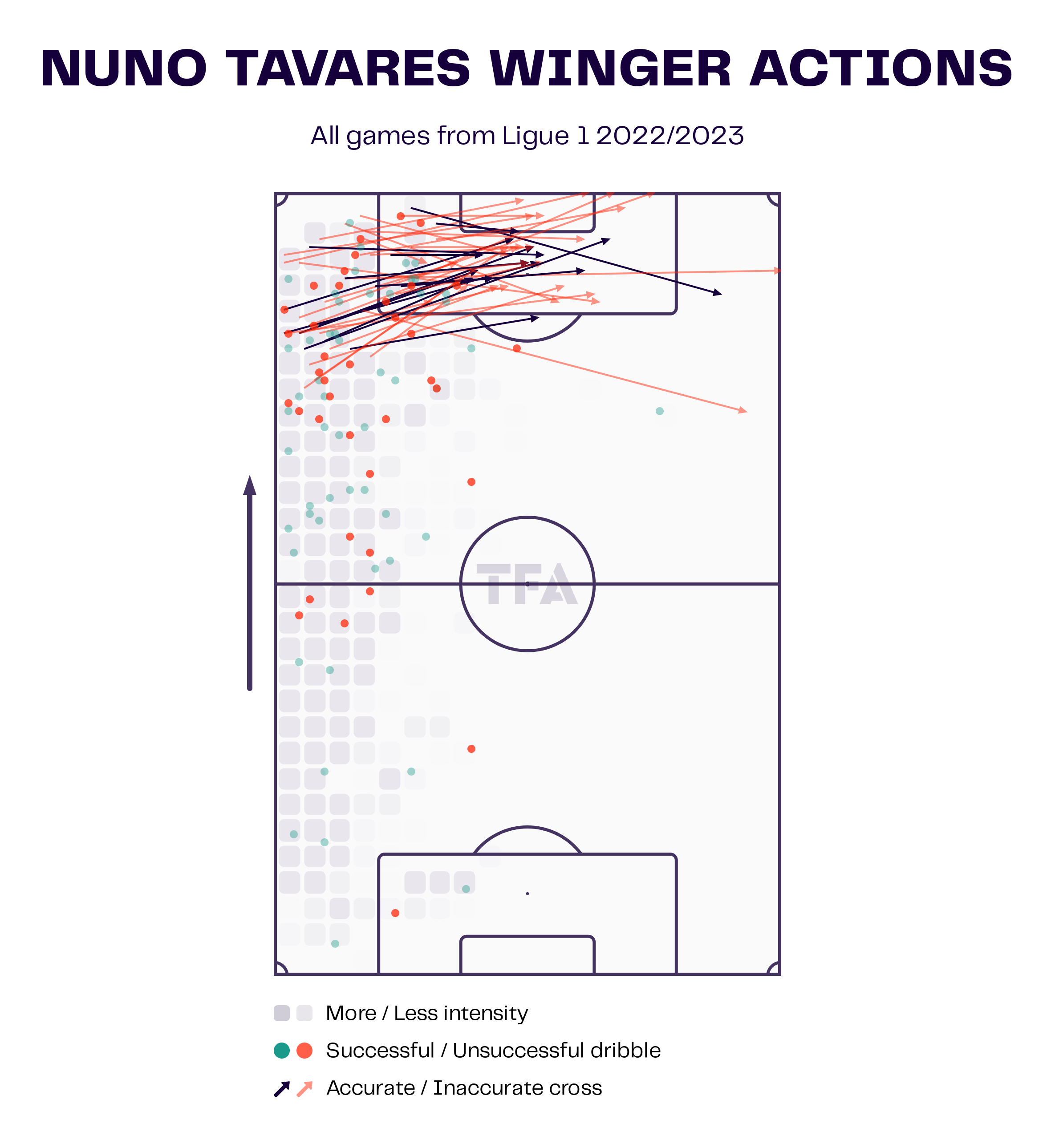 Nuno is an extremely attack-minded left-wing back, which makes him a constant threat for opponents. He is an extremely agile and fast wingback, which makes it difficult to keep pace with him. His tendency to attempt dribbles in the final third causes damage to the opponent. Taraves tend to either cut inside or send in a deep or even a short cross into the box. The above viz shows Nuno Tavares’ winger actions in Ligue 1 in 2022/23. It can be observed that most of his intensity is on the left flank of the middle and final third. The number of successful dribbles on the left flank of the final third is very high. His tendency to take frequent crosses and his ability to deliver them accurately is also demonstrated. 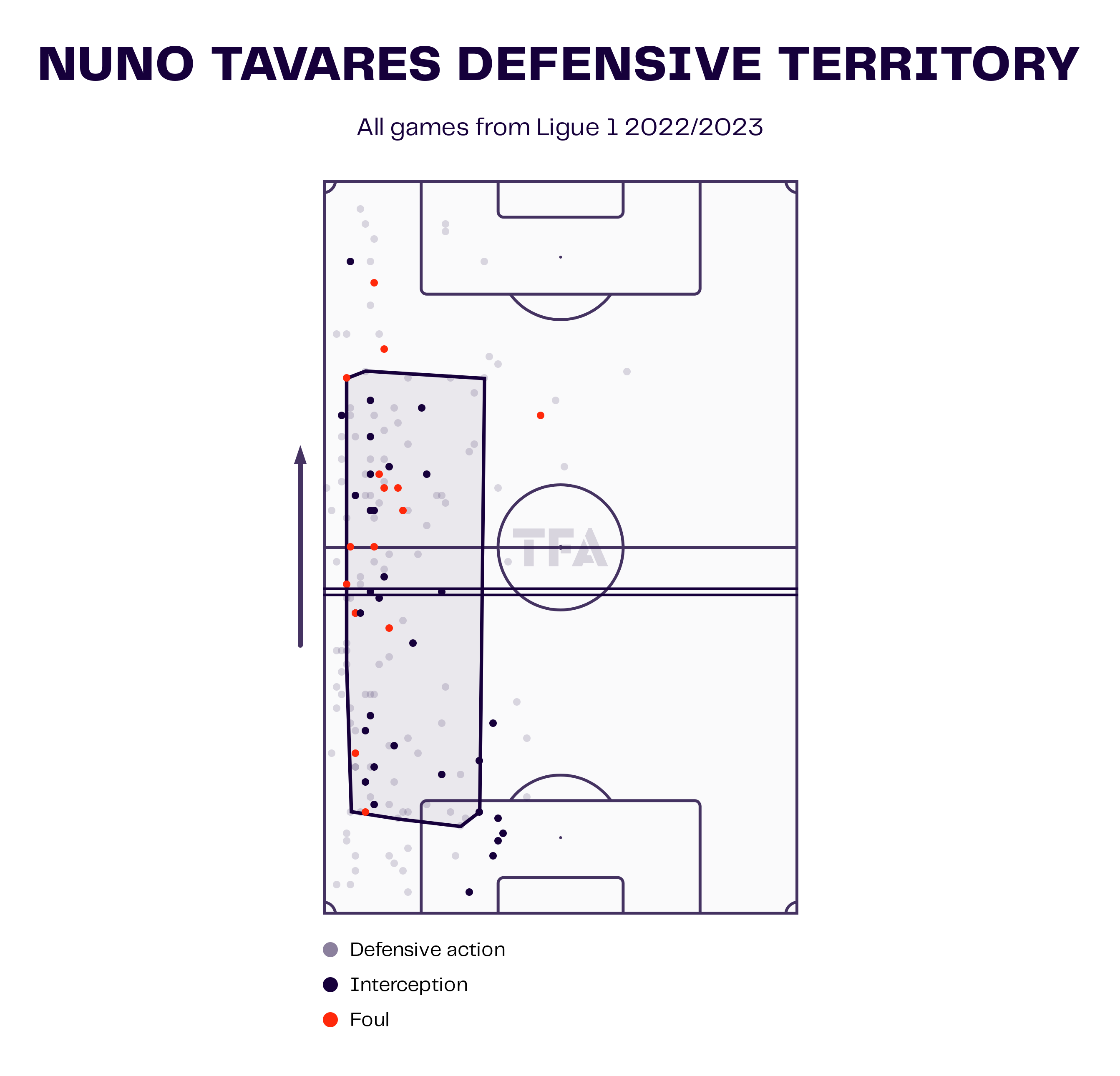 Overall, it appears that Nuno Taraves is a player of constant attacking ability for Marseille. His ability to position himself in dangerous attacking areas on the left flank gives his team an advantage. His dribbling abilities are also a factor in his growing success in games. The ability of a left-back to provide the team with a consistent attacking option can prove to be an asset for any team.

Transfer Analysis: Why AS Monaco is keeping tabs on Cercle Brugges’...