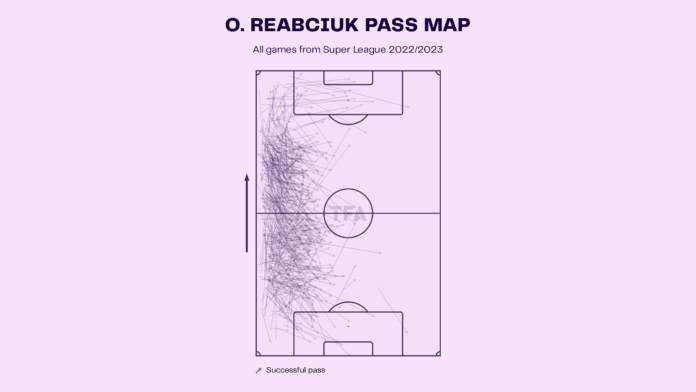 Oleg Reabciuk is a Moldovan professional footballer who plays as a left-back for Super League Greece club Olympiacos and the Moldova national team. Raised in Portugal, he played in the LigaPro for Porto B and the Primeira Liga for Paços de Ferreira. Strasbourg are looking for a left-back and hopes to bring the player to Ligue 1. As a defender, Oleg Reabciuk has conceded nine goals and kept eight clean sheets in 15 matches in the Super League 2022/2023 season. That means when Reabciuk is on the pitch, his team concedes a goal every 141 minutes. He is a pure left-back and performs textbook left-back actions for his team. He is currently having the best season at his club and is playing a key role in Olympiacos’ quest for the Super League title this season. Below are some stats for Oleg Reabciuk’s impressive performance at left-back for Olympiacos in the Super League this season. 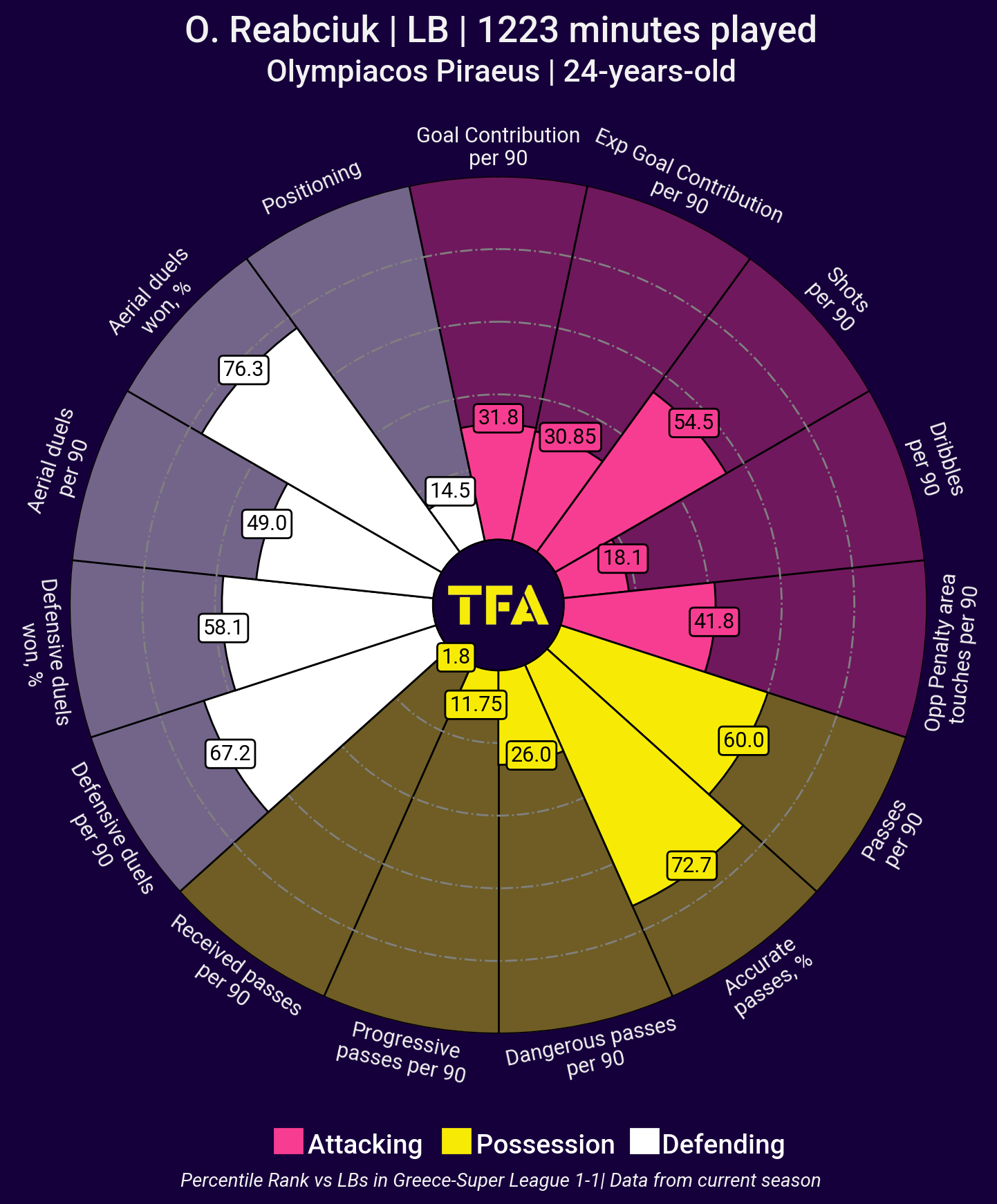 Quick on the pitch 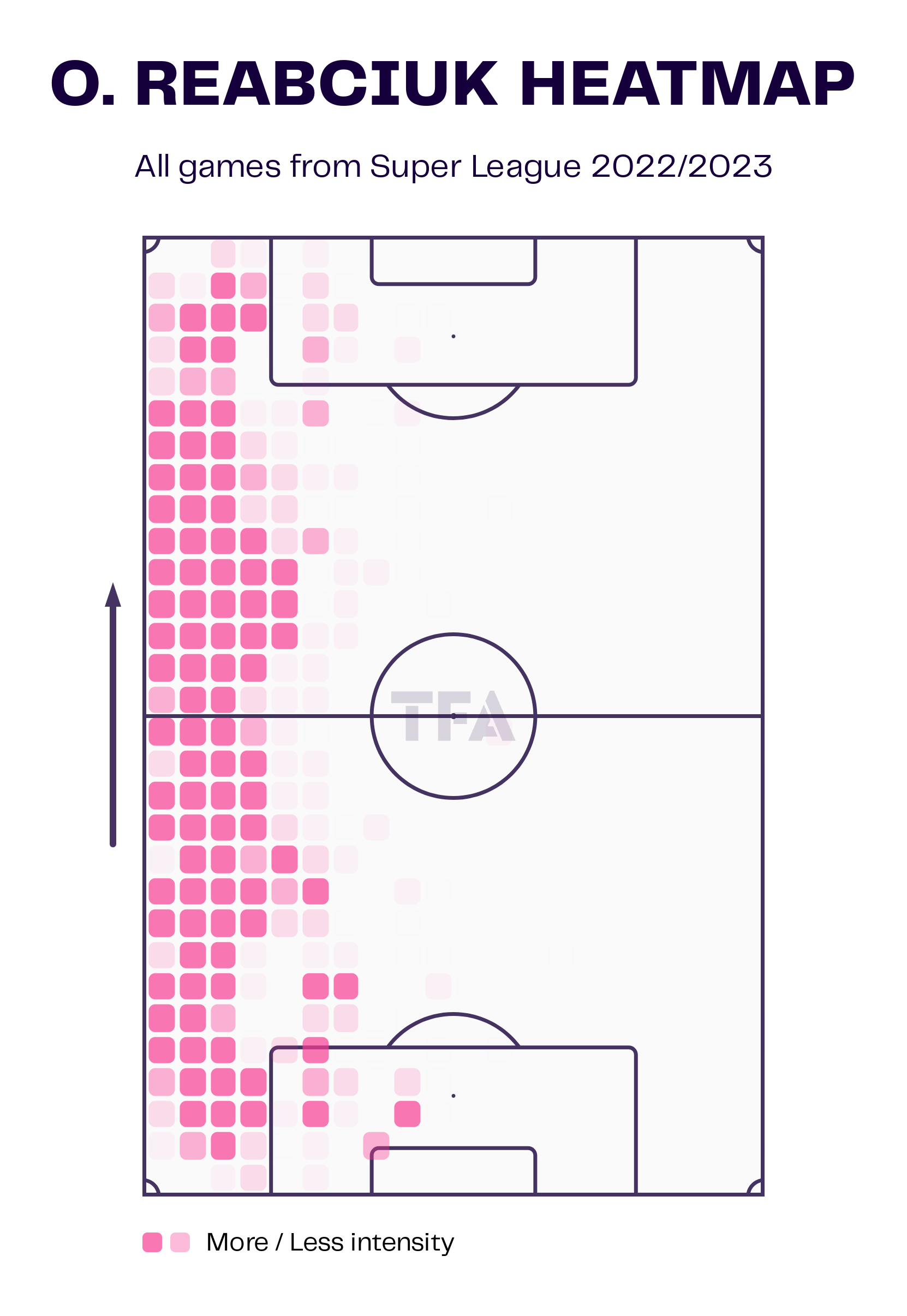 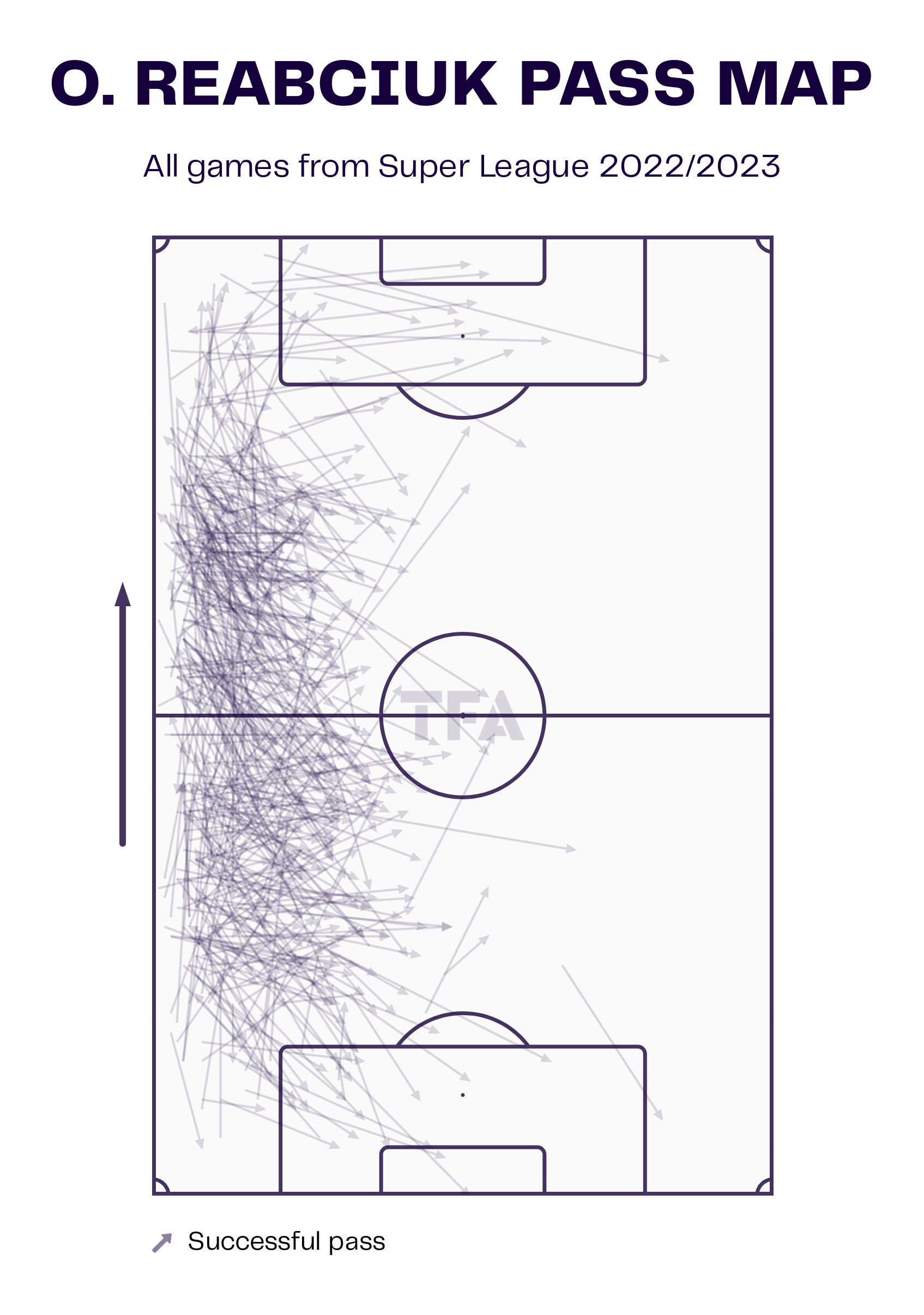 Oleg Reabciuk covers the entire left flank of the pitch as a left-back. He has assisted three goals in 15 matches so far in the Super League 2022–2023 season. Looking at his passing aspect of the game, Reabciuk passes the ball roughly 39.48 times during a game with a pass completion rate of 85%. He also plays 0.50 key passes each game, which leads to significant scoring chances. Overall, Reabciuk’s xA output is 0.22 per 90 minutes.

Movement up the left 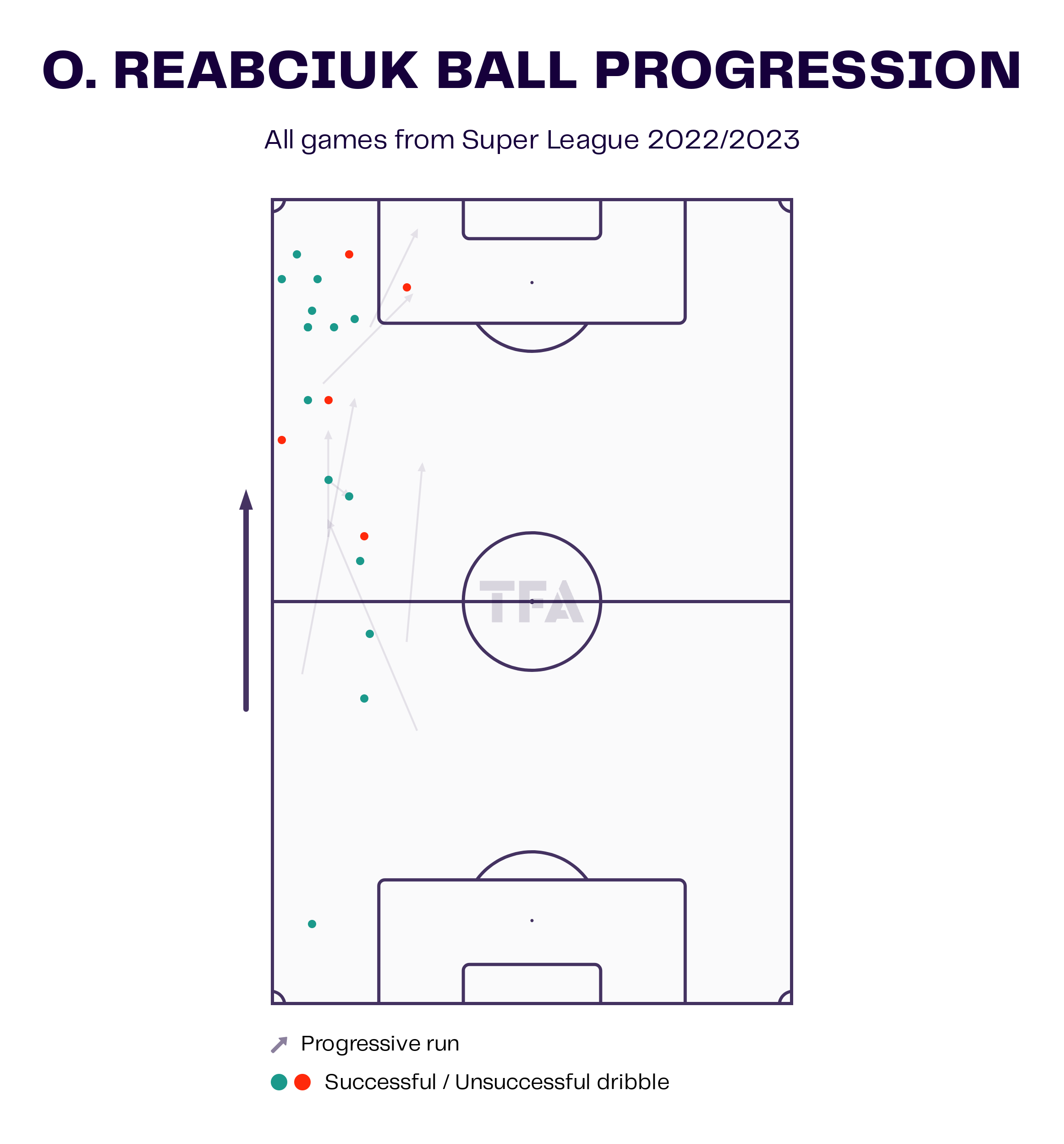 The above viz depicts the ball progressions made by Oleg. It can be observed that he makes most of his attempts in the middle third and final third of the pitch. We can also see that he attempts 1.3 dribbles per 90 with a success rate of 75% but is not among the top percentile for average dribbles in the league. He tends to move across the pitch with the ball once he’s near the final third of the pitch. He has most of his success deep on the left flank, from where he can create chances.

From left-back to left-winger 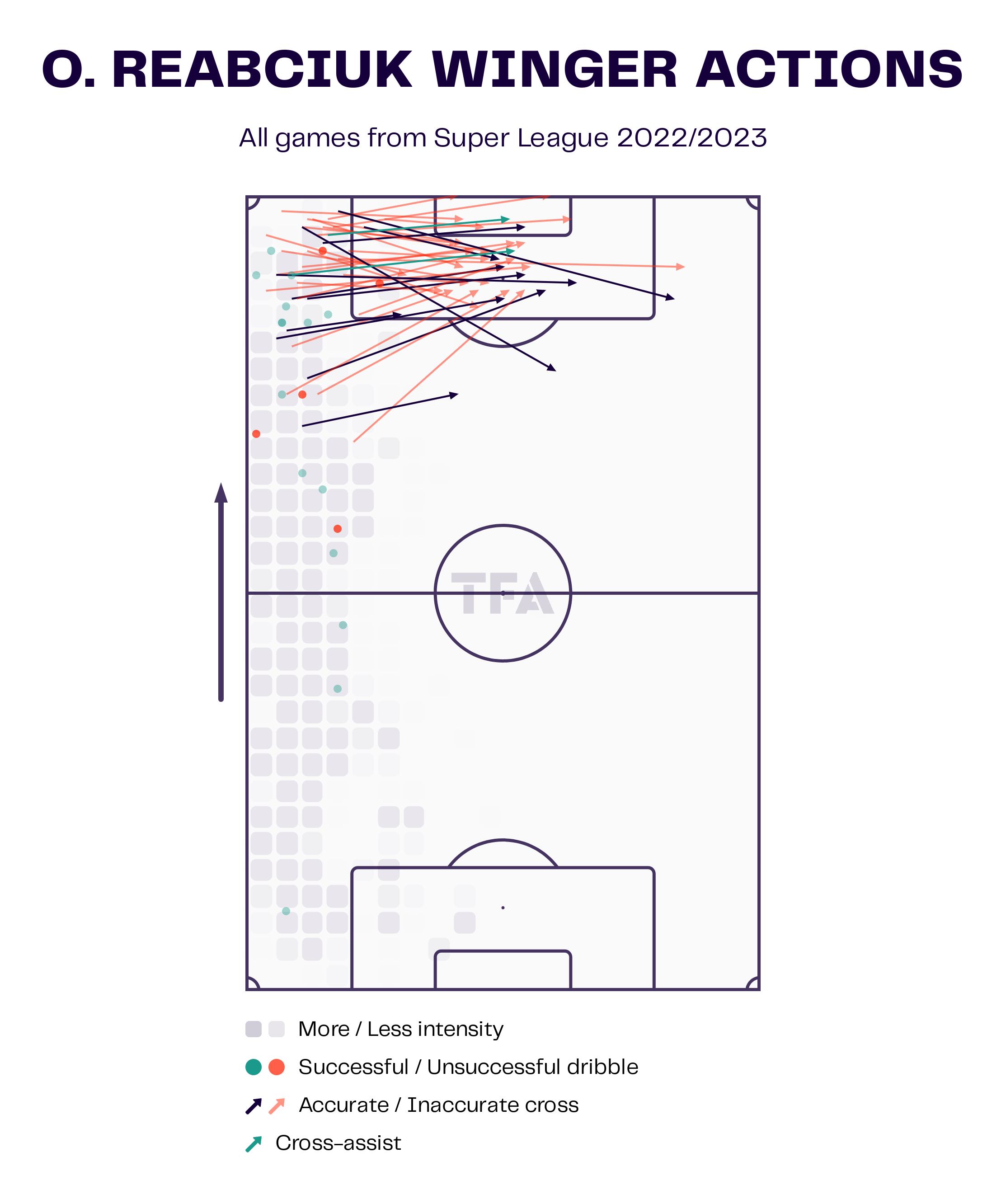 Oleg is a textbook left-back, which makes him a very valuable asset for the team. He is extremely agile and fast, which makes it difficult to keep up with him. His tendency to attempt dribbles in the final third causes damage to the opponent. Oleg tends to either cut inside or send in a deep or even a short cross into the box. The above viz shows Oleg Reabciuk’s winger actions in Super League in 2022/23. It can be observed that most of his intensity is on the left flank of the middle and final third. The number of successful dribbles on the left flank of the final third is very high. His tendency to take frequent crosses and his ability to deliver them accurately is also demonstrated, and he makes 2.73 accurate crosses on average. 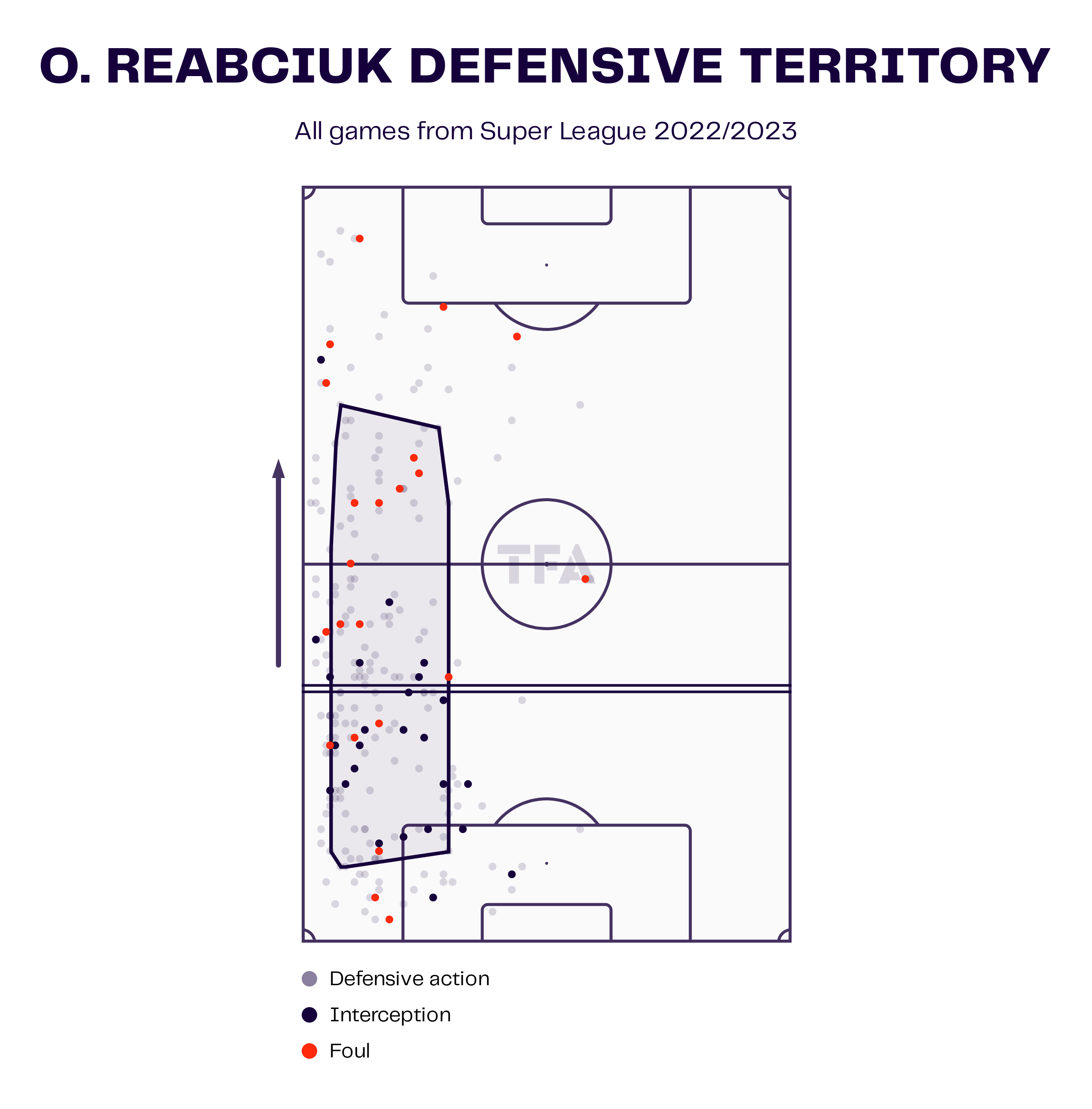 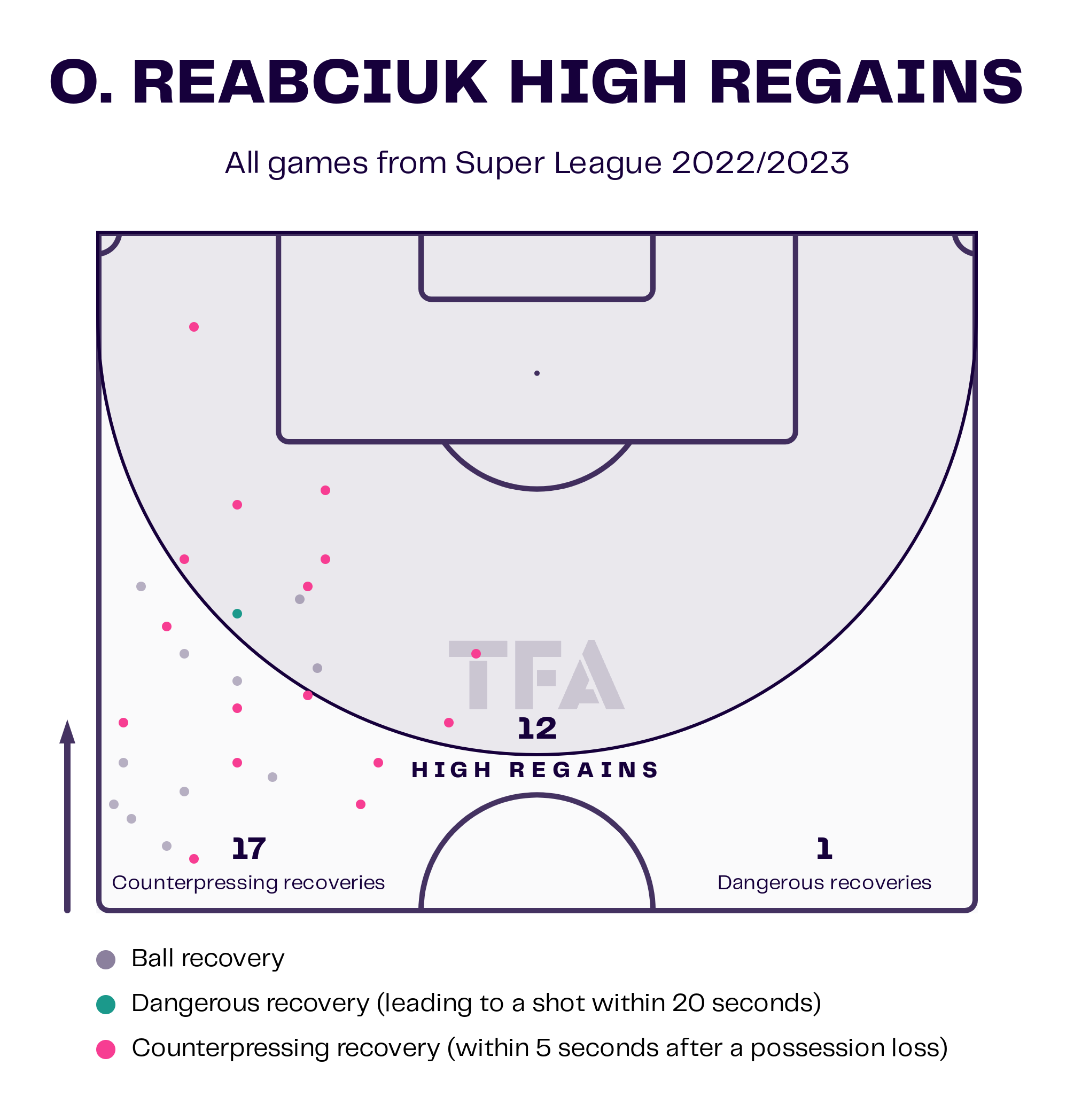 The above viz shows the defensive territory of the player. It indicates that Oleg is involved in a lot of defensive actions in the defensive and middle thirds. Being a left-back, he covers the entire left flank in terms of his defensive area. There are a few interceptions inside the box as well. Overall, he has a win percentage of 64.4% for defensive duels and 58.9% for aerial duels per 90 minutes. He also makes interceptions inside the box as well as in his defensive third. He makes 3.44 interceptions per 90 and 8.12 recoveries in the final third per 90. He has also made high regains and counter-pressing recoveries, as shown above. Again, he plays exclusively on the left wing and has contributed to one dangerous recovery this season. 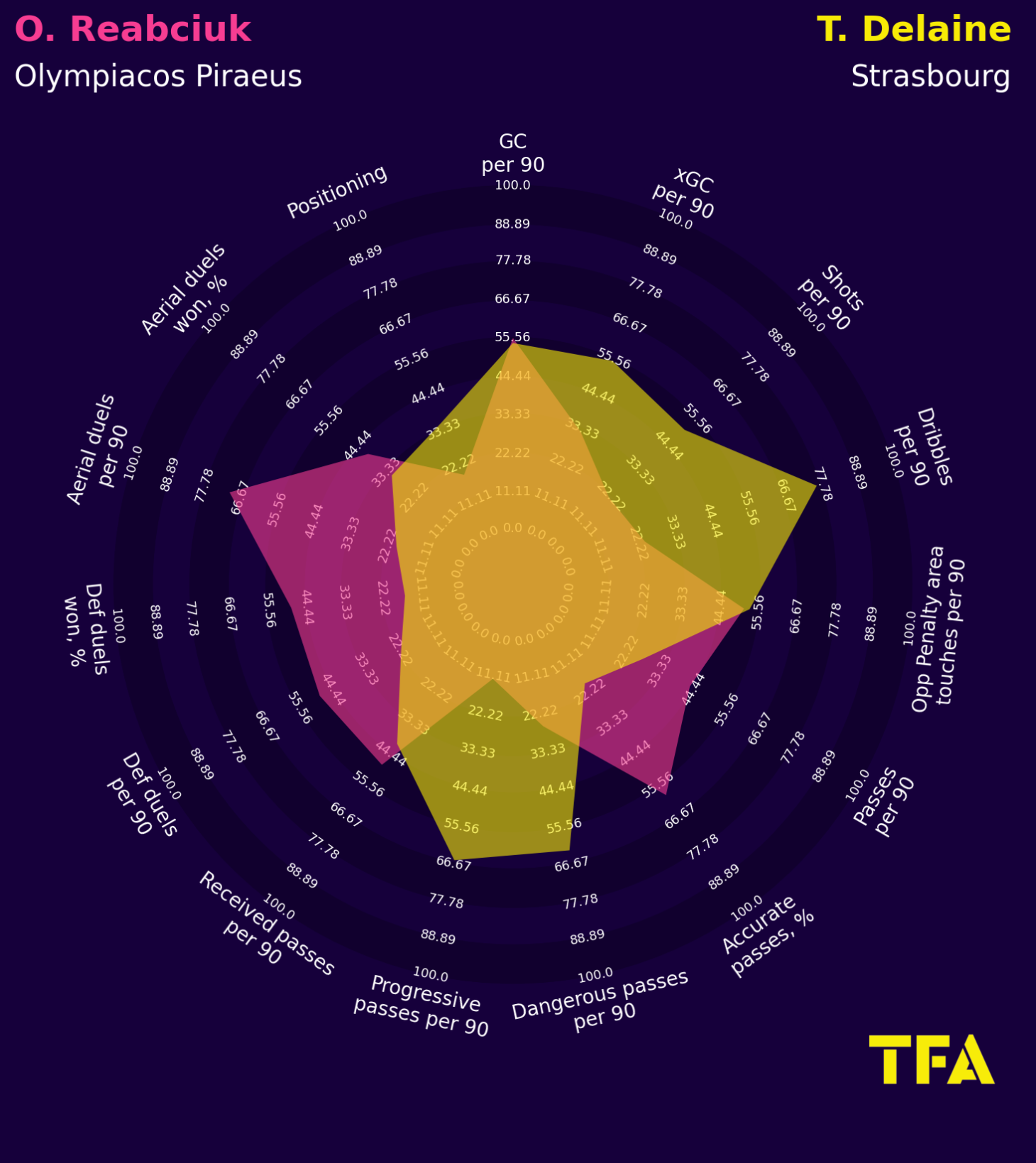 The above viz is a comparison between Reabciuk and Delaine. Currently, 30-year-old Thomas Delaine plays as a defender for Strasbourg in Ligue 1. It can be seen that Oleg has better numbers compared to Thomas in most of the stats. Given the age of Reabciuk and the amount of potential he possesses, he will serve as the perfect replacement for Delaine in the Strasbourg backline. More importantly, Strasbourg does not have any players in their squad who are outright left-backs. Therefore, having Reabciuk join them will be a huge boost to their overall defensive structure.

It remains to be seen whether Strasbourg will be able to acquire Oleg in this transfer window. Overall, Oleg Reabciuk is a master in his position and seems familiar with the requirements at left-back. His ability to provide stability in attack as well as stop opponents from penetrating makes him a valuable addition to any side.

Under the microscope: How Amine Harit is a big miss for...