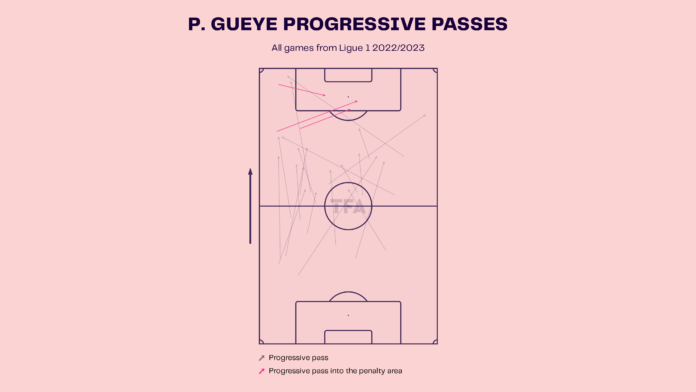 Pape Gueye is a Senegalese professional footballer who plays as a defensive midfielder for Ligue 1 club Marseille. Born in France, he plays for the Senegal national team. Pape Gueye is a midfielder who has appeared in 11 matches this season in Ligue 1, playing a total of 511 minutes. He is a defence-minded midfielder and provides plenty of support to his team’s backline. Pape Gueye has scored one goal in the league this season as a midfielder, placing him eighth on the Olympique Marseille team’s top scorers list. Gueye is a box-to-box midfielder, noted for his aggressive and highly competitive style of play. He also has good game-viewing skills and physical strength. His ability to position himself in the most suitable positions to start and stop attacks make him special and a valuable asset for the team. Below are some stats for the player from the 2022–23 Ligue 1 season. 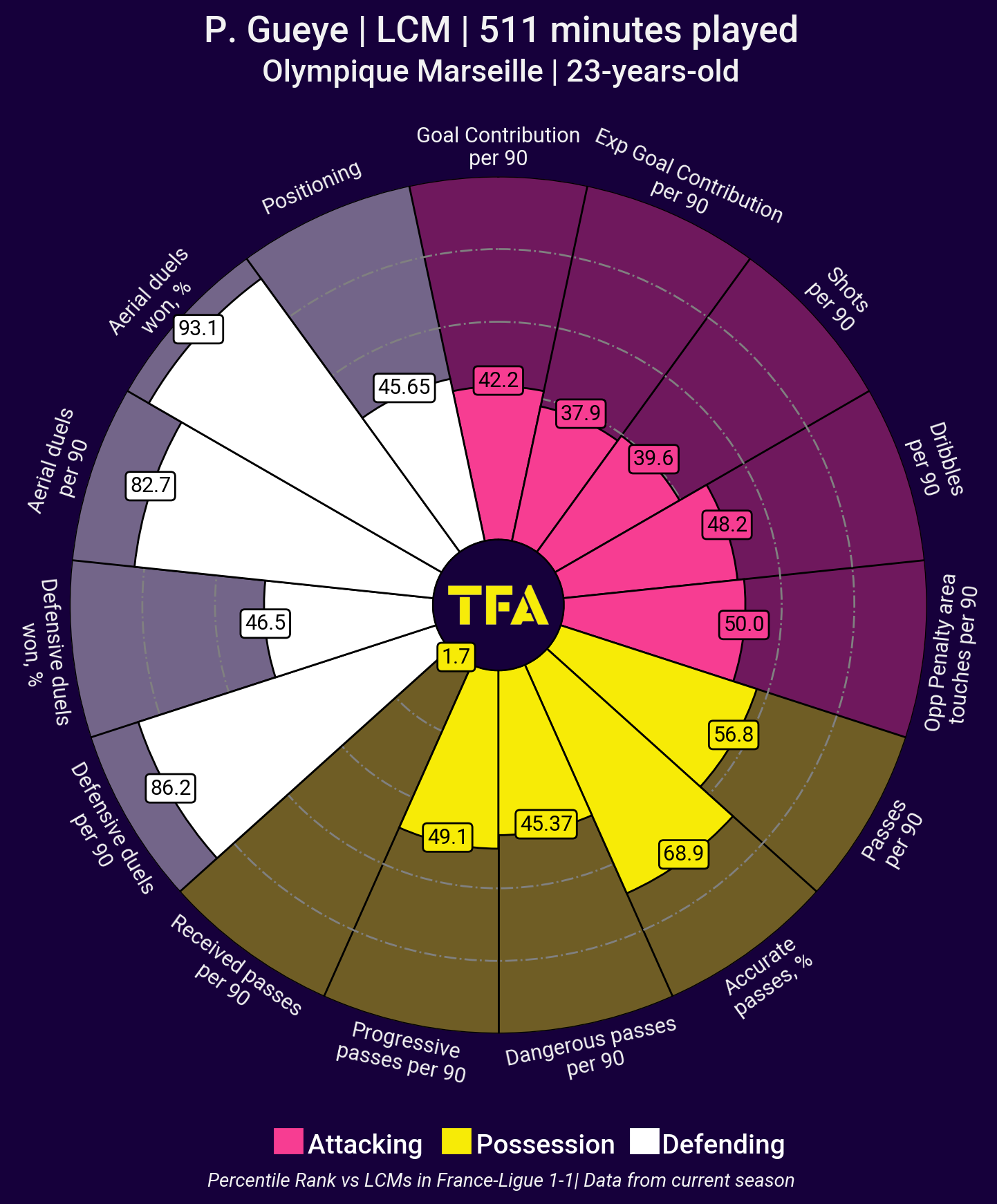 The above viz shows his percentile rank compared to the other central midfielders in Ligue 1. Gueye’s defensive stats are excellent for a midfielder. He is ranked highly for winning aerial duels. The player’s ability to attack has been decent. He is ranked fairly for shots and dribbles. He has also maintained decent possession stats and ranks well in passing abilities. 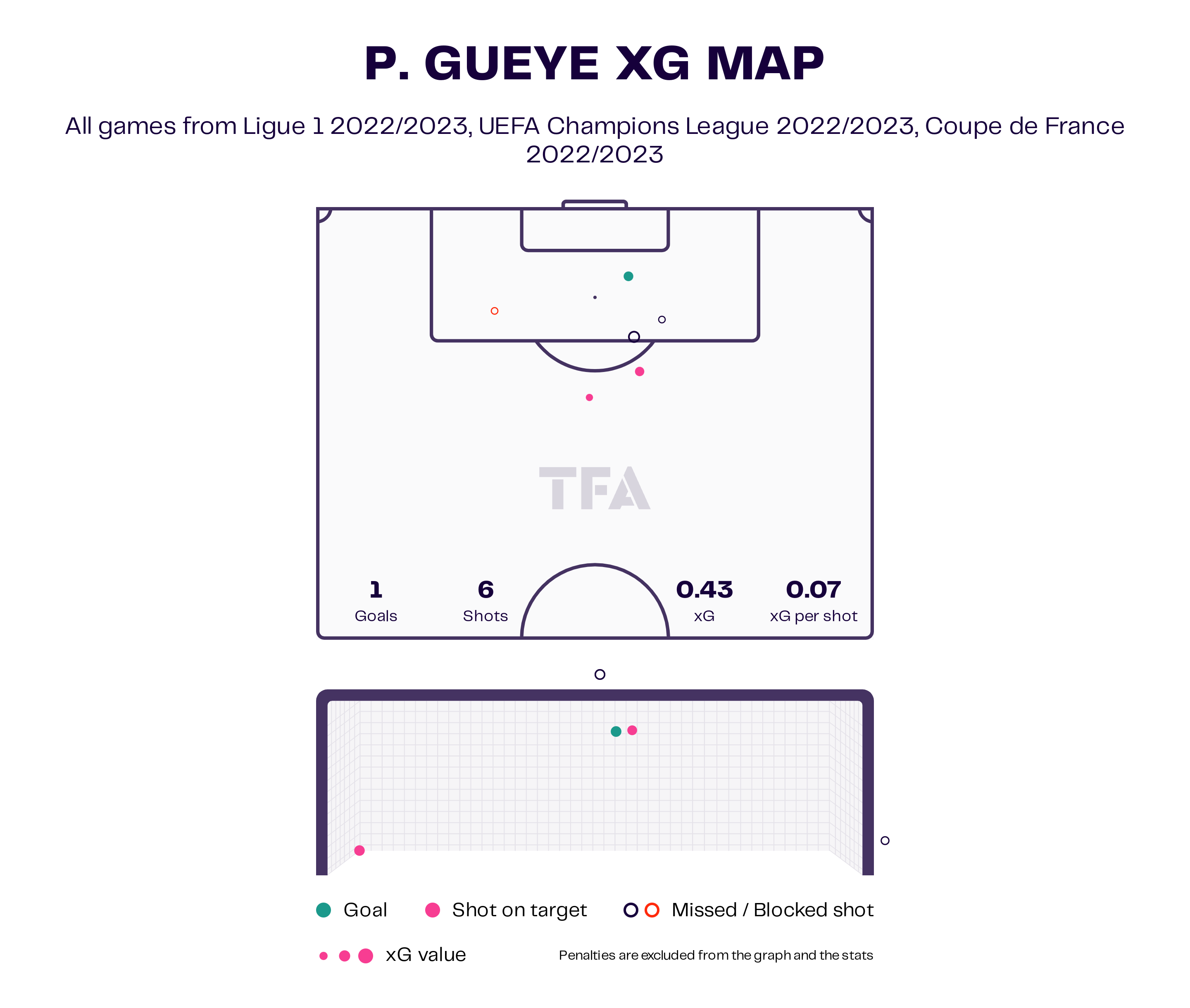 Pape Gueye has scored one goal in eight appearances for Marseille across all competitions this season. Overall, Pape Gueye’s goals scored per 90 minutes are 0.2. Moreover, Gueye’s total goal contribution (goals plus assists) is two. He is more of a holding midfielder who plays box-to-box and gives the team support and composure. He has an overall xG of 0.43 and has attempted shots on target from outside the box on a couple of occasions. He takes 1.6 shots per 90 with 50% accuracy in Ligue 1. 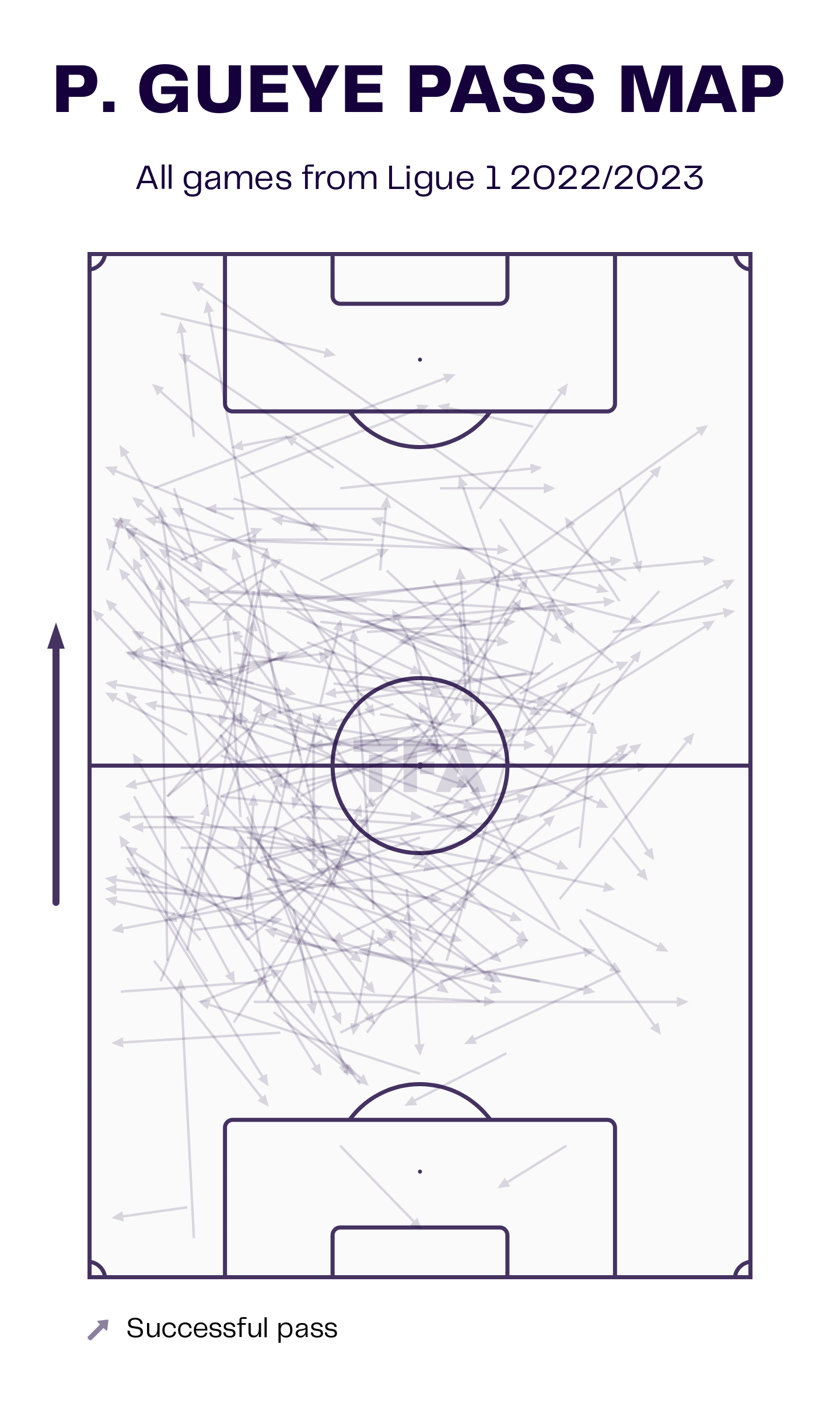 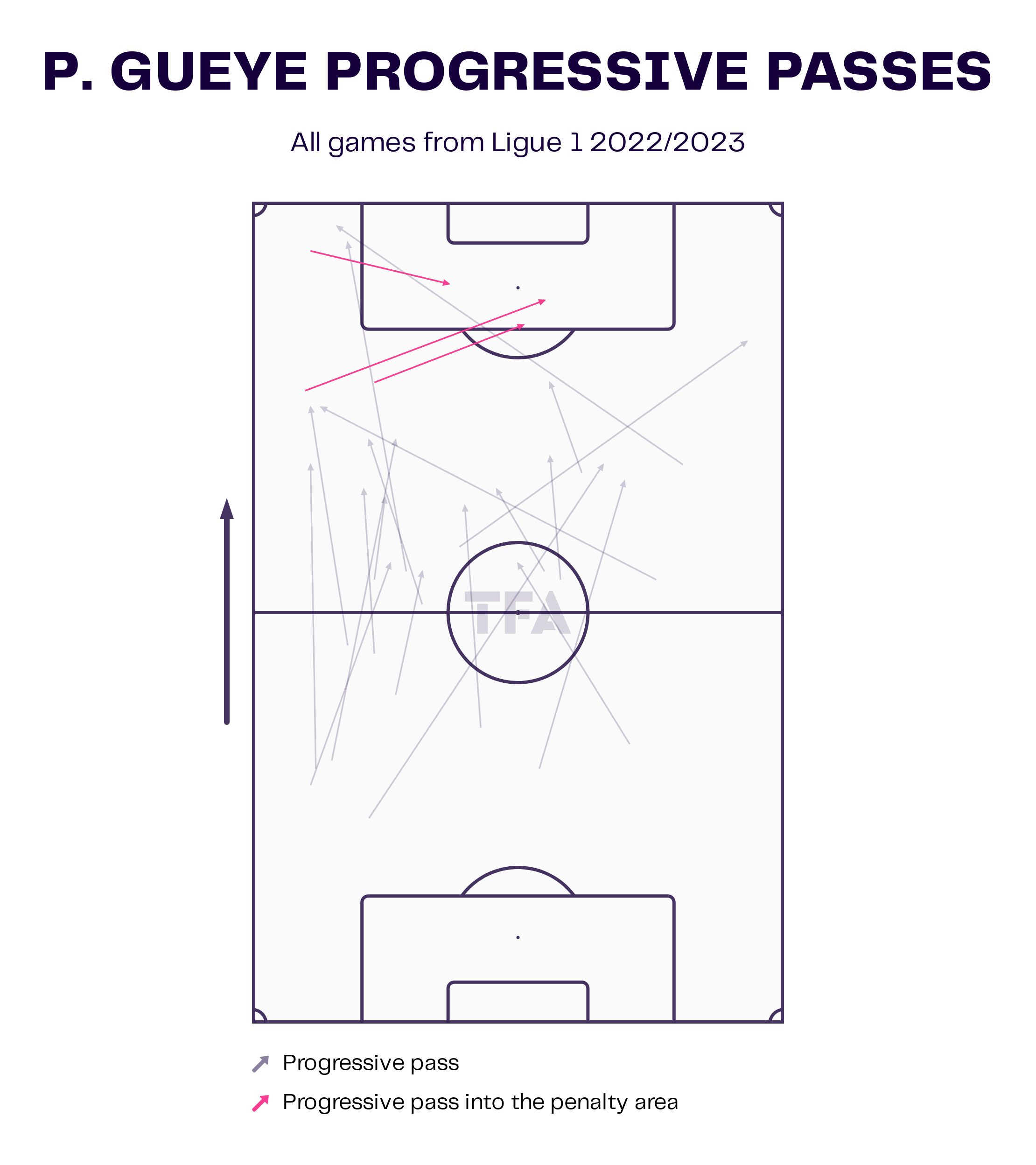 Pape Gueye covers the left central midfield area in the middle third for Marseille. He is primarily a holding and defensive midfielder who likes to sit back, maintain possession, and provide a passing option. He also performs defensive duties, and most of his intensity can be seen in the middle of the pitch for his team. Pape usually plays on the left side of the midfield and makes movements up the pitch in order to create an attacking threat and receive the ball in dangerous areas. Gueye makes 48.79 accurate passes on average per 90, with a completion rate of 89.2%. It can be seen that the player makes many forward passes, averaging 13.56 per match, and makes 5.99 passes to the final third per 90.

Progression through the mid 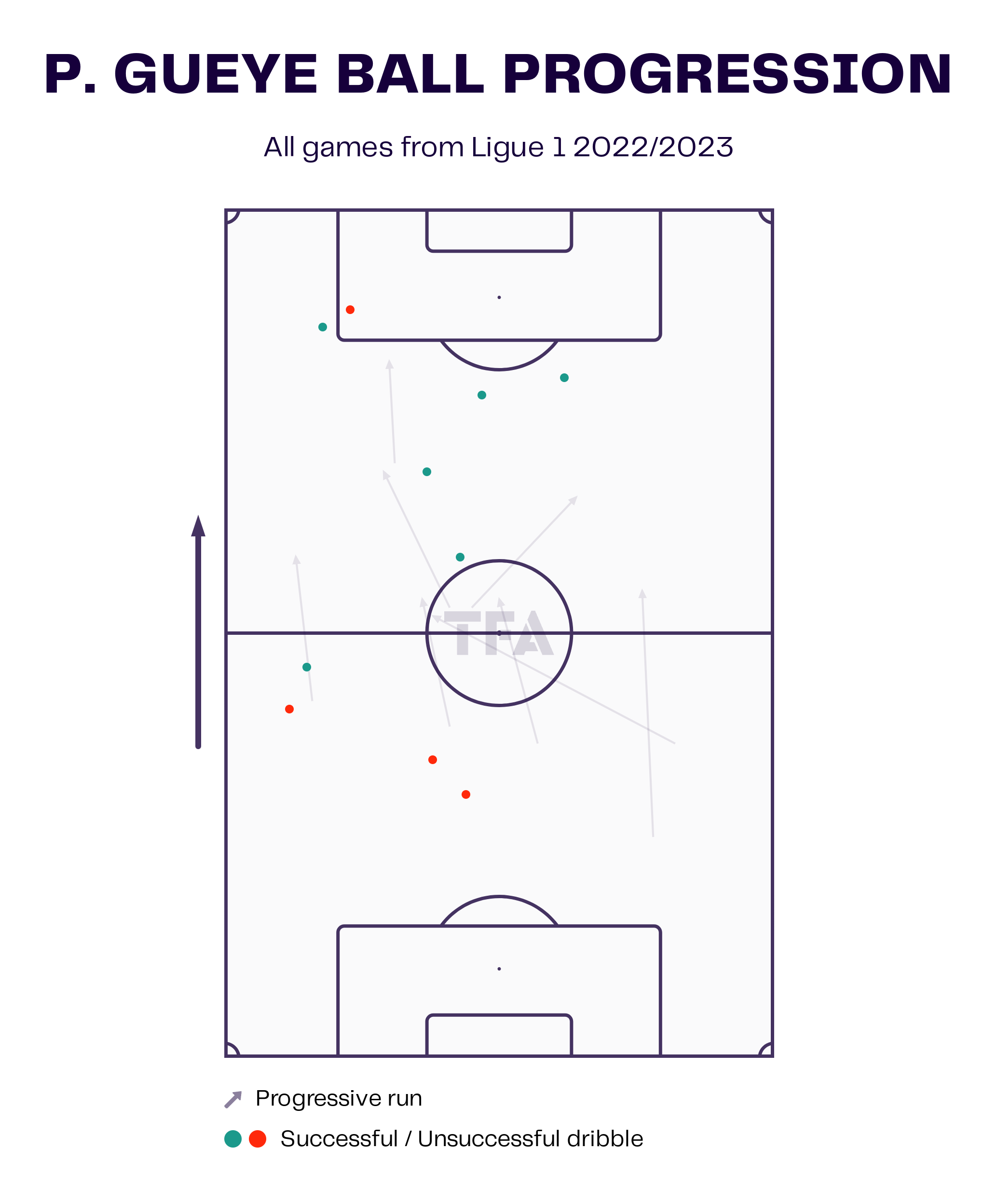 Pape Gueye likes to play possession football through the middle of the pitch. He attempts 1.76 dribbles per match, with 60% of them being successful. Most of his action is in the middle and final third of the pitch. His confidence and ability to keep hold of the ball are what make him worth more and are one of the reasons behind his success. He averages 1.41 progressive runs per match and makes penetrating carries into the penalty area. 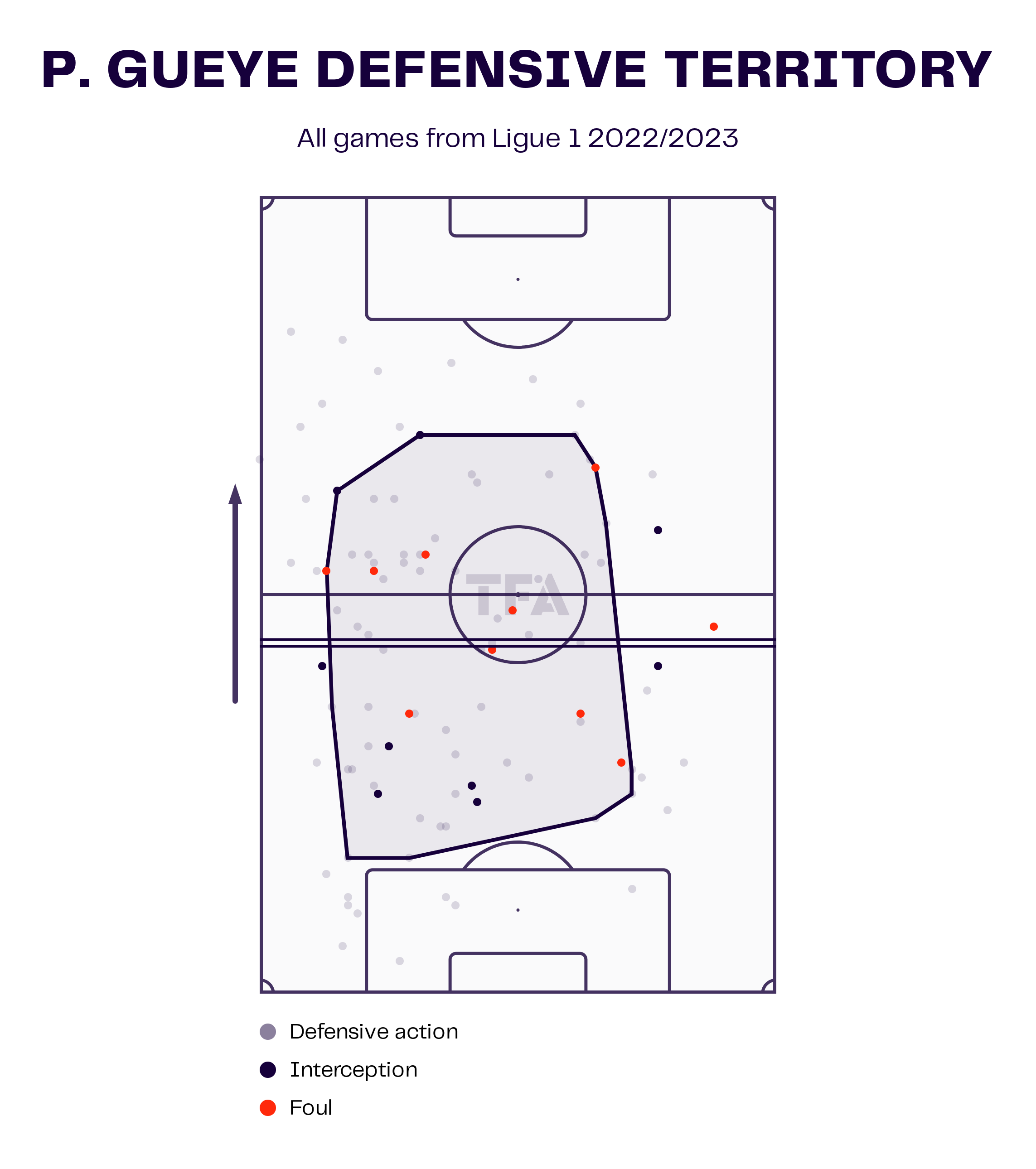 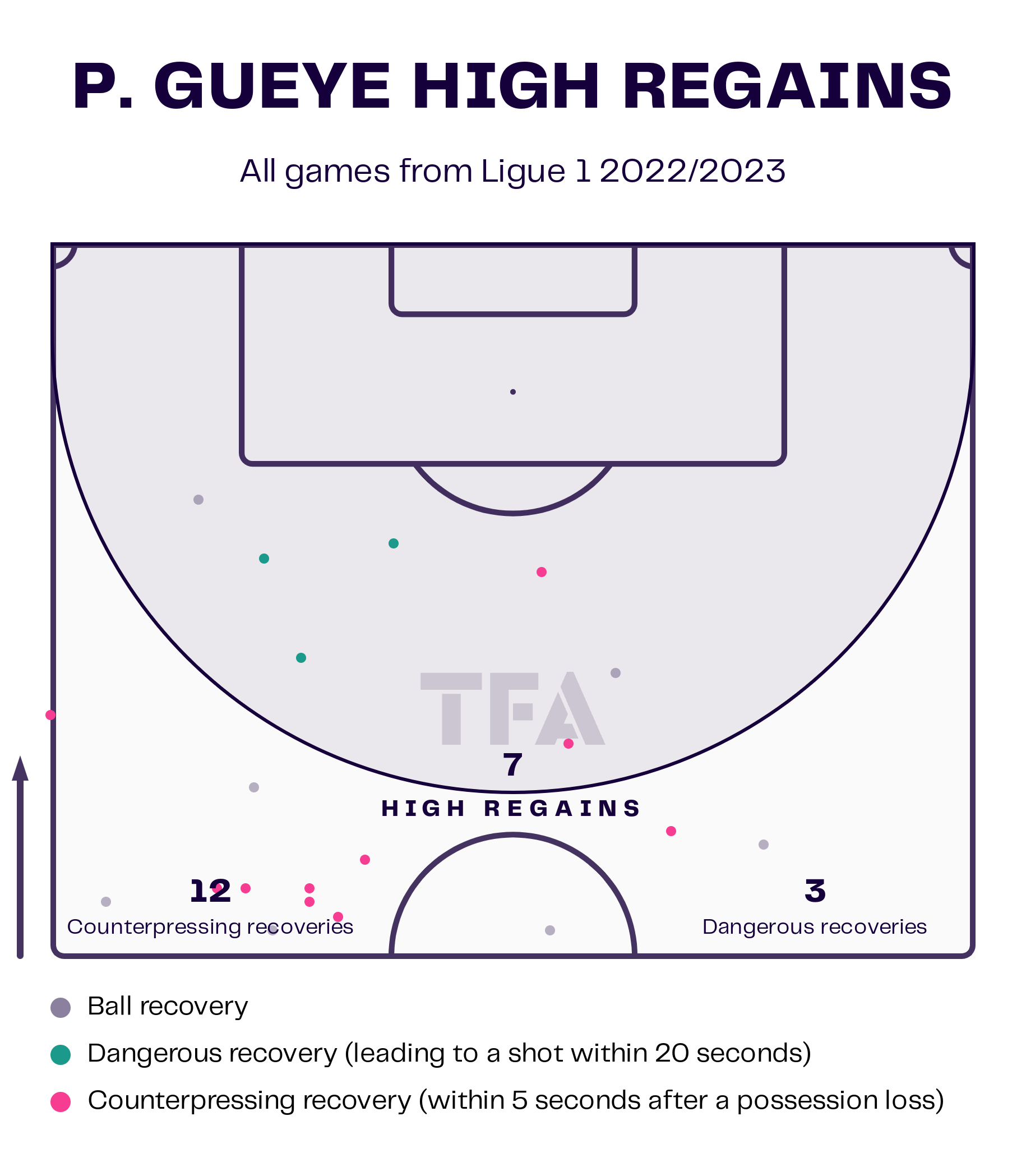 The above viz shows the defensive territory and various high regains of the player for Marseille in Ligue 1 2022/23. It indicates that Pape is involved in a lot of defensive actions in the defensive third and makes interceptions near the defensive and middle third. It can be observed that the player has not given up many fouls and has averaged only 1.76 fouls in the current season. Overall, he has an average of 21.14 duels per 90 and a 55% win rate. Gueye averages 2.64 interceptions per 90 minutes and makes a lot of movement in the opposition’s half in order to put high pressure on the opposition’s midfield and final third. He makes 8.81 recoveries in the opposition’s half per 90.

Overall, Pape Gueye has been performing his duties in the middle of the park and is a diligent player who likes to act as a calming presence in the midfield. He is a player with extremely high quality and precision and is a crucial part of the current Marseille team. He is a valuable asset for his team and provides additional defensive strength on the pitch. His role is well-defined, and he makes sure to execute his game perfectly while on the field.

‘Has all the attributes’ – Sagna praises Saliba