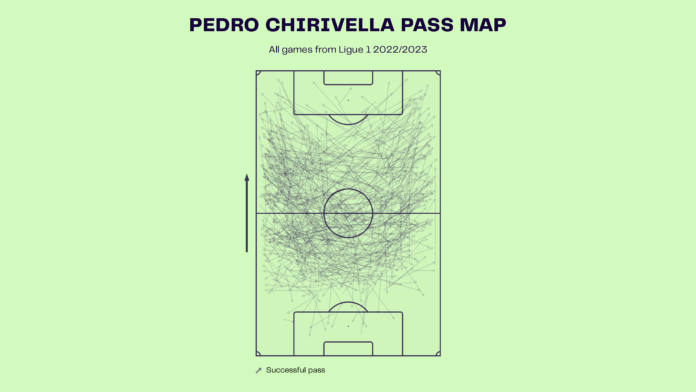 Pedro Chirivella didn’t lack potential when he transferred from Liverpool’s under-23s to Ligue 1 side Nantes in 2020, despite having never played in a senior match for Merseyside. Chirivella was only 23 years old and had performed admirably during loan stints in the Dutch second division and the Spanish second division, but it was still unclear how well he would adjust to the demands of French football. The team improved last year under Antoine Kombouaré, finishing in the top half and winning the Coupe de France. Despite the fact that managing Europe, where the club will face Juventus in the new year, has not always been easy, Chirivella has remained exceptional. In April, while he was getting close to 100 appearances for the team, he even obtained a contract extension. Below are some stats showing his performances for Nantes this season. 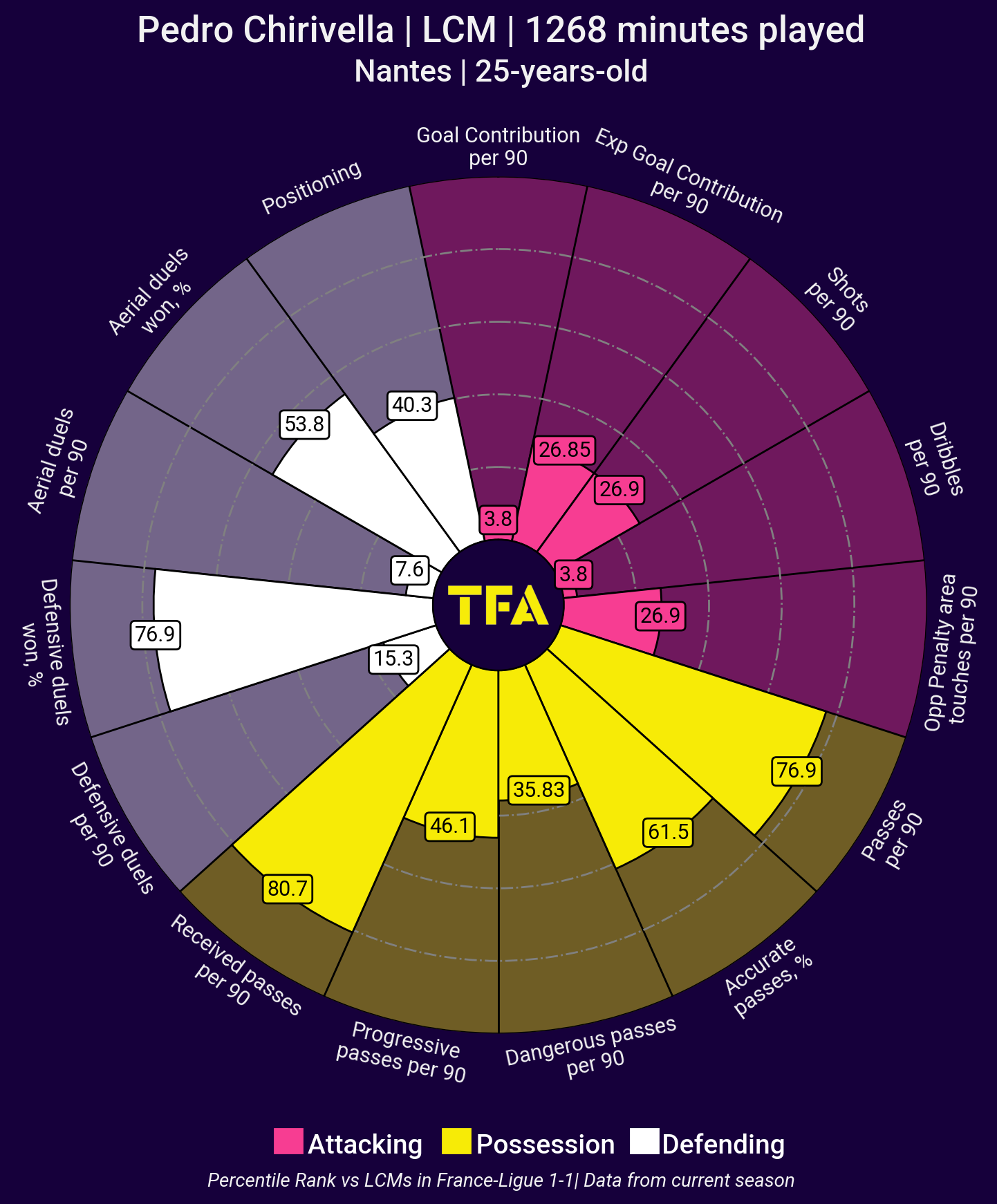 The above viz shows the percentile rank in comparison to the other left central midfielders in the league. The player’s possession stats are in a good range for a midfielder. He is ranked highly for passes received. The player’s ability to defend has been extraordinary. He is ranked high for defensive and aerial duels won, and this has been a crucial advantage for the player and his team. He has also maintained impressive possession stats and ranks well in terms of passing abilities. 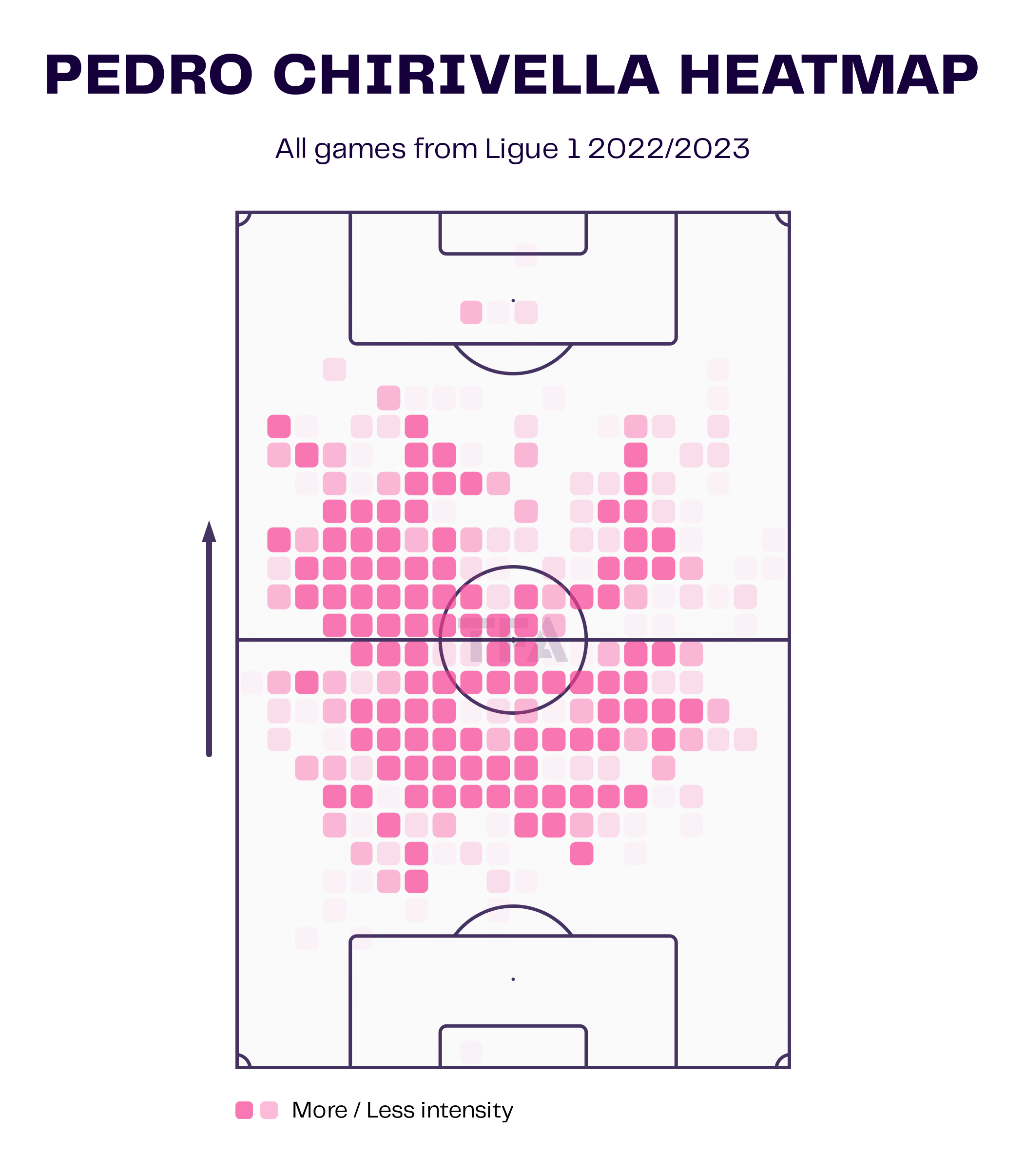 Pedro Chirivella covers the central defensive area in the middle third for Nantes. He performs defensive duties as a midfielder, and most of his intensity can be seen in the middle of the pitch for his team. Pedro makes only 0.2 dribbles per 90 with a 33.3% success rate. He gets 0.44 touches in the opponent’s penalty area per 90. The player tends to act as an anchor in the midfield, helping to maintain control in the game and on the pitch. 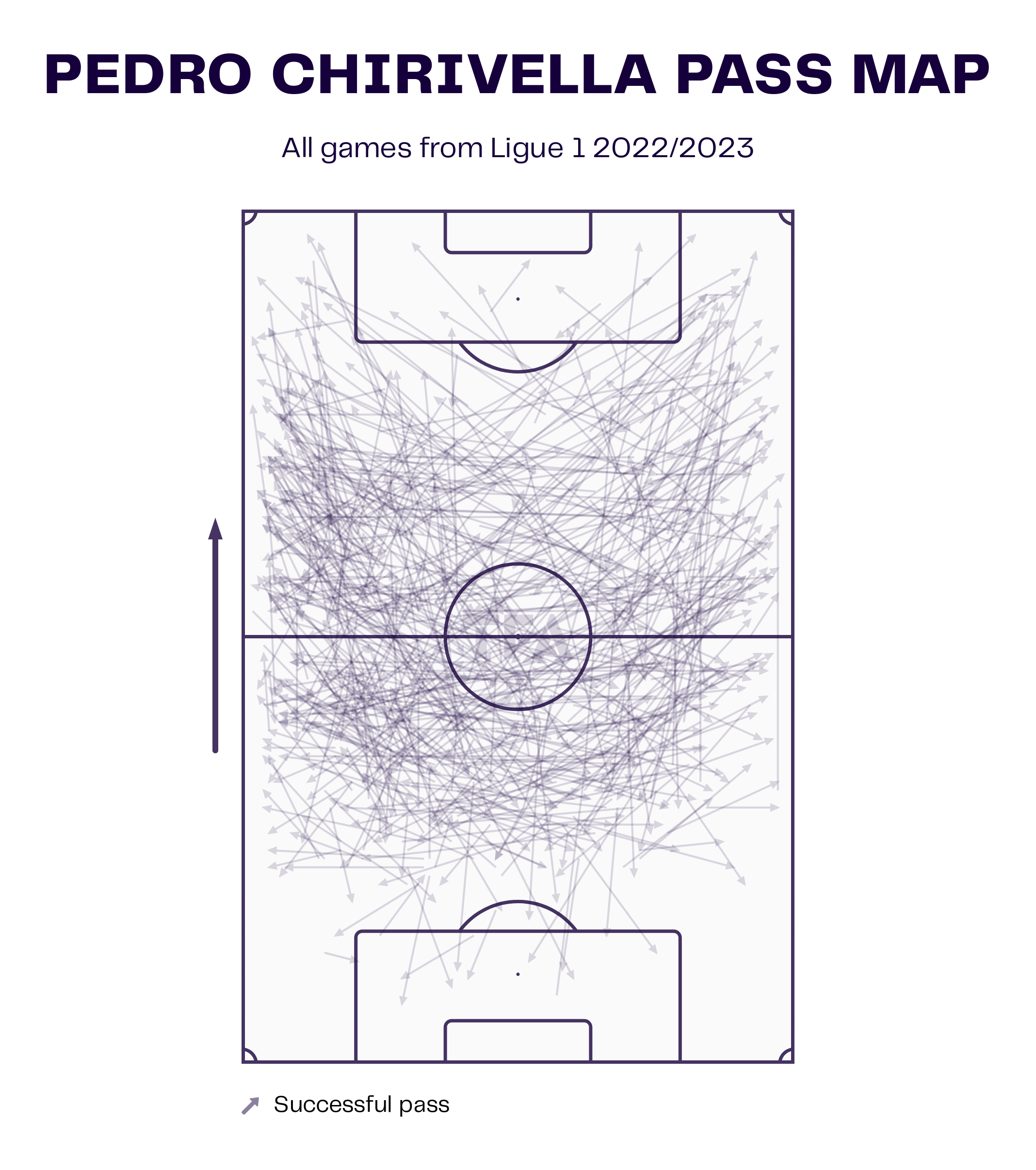 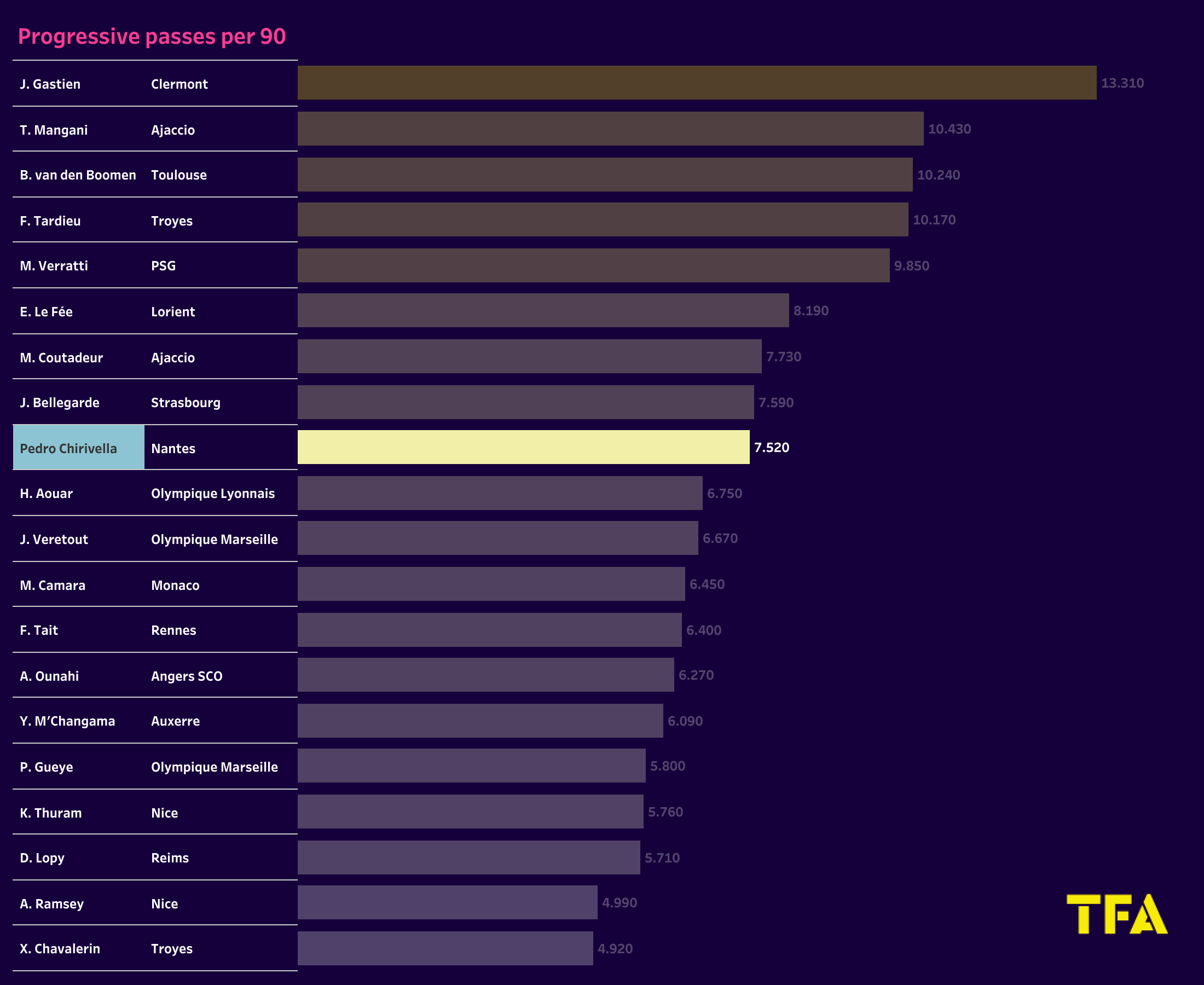 Pedro Chirivella usually plays on the left side of the midfield and makes movements up and down the pitch in order to create space and receive the pass. Pedro makes 57.43 accurate passes on average per 90 with a completion rate of 87.9%. It can be seen that the player makes many passes back toward the backline or centre-backs, indicating his tendency to maintain possession for the team. He makes 11.73 passes to the final third per 90. Additionally, the player makes 16.69 forward passes and 8.51 backward passes on average. The player is among the top ten central midfielders for progressive passes per 90, averaging 7.52 progressive passes per 90. 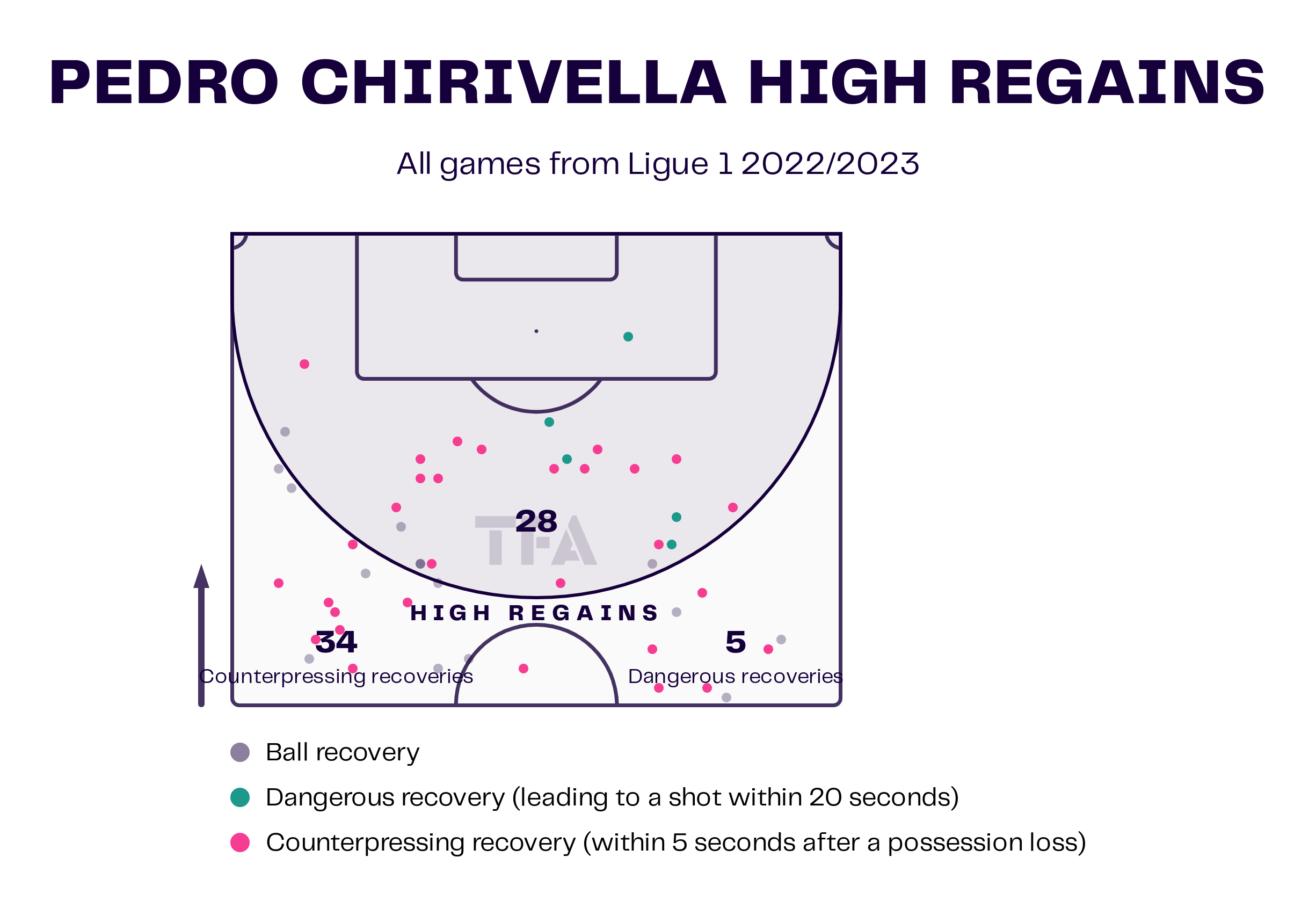 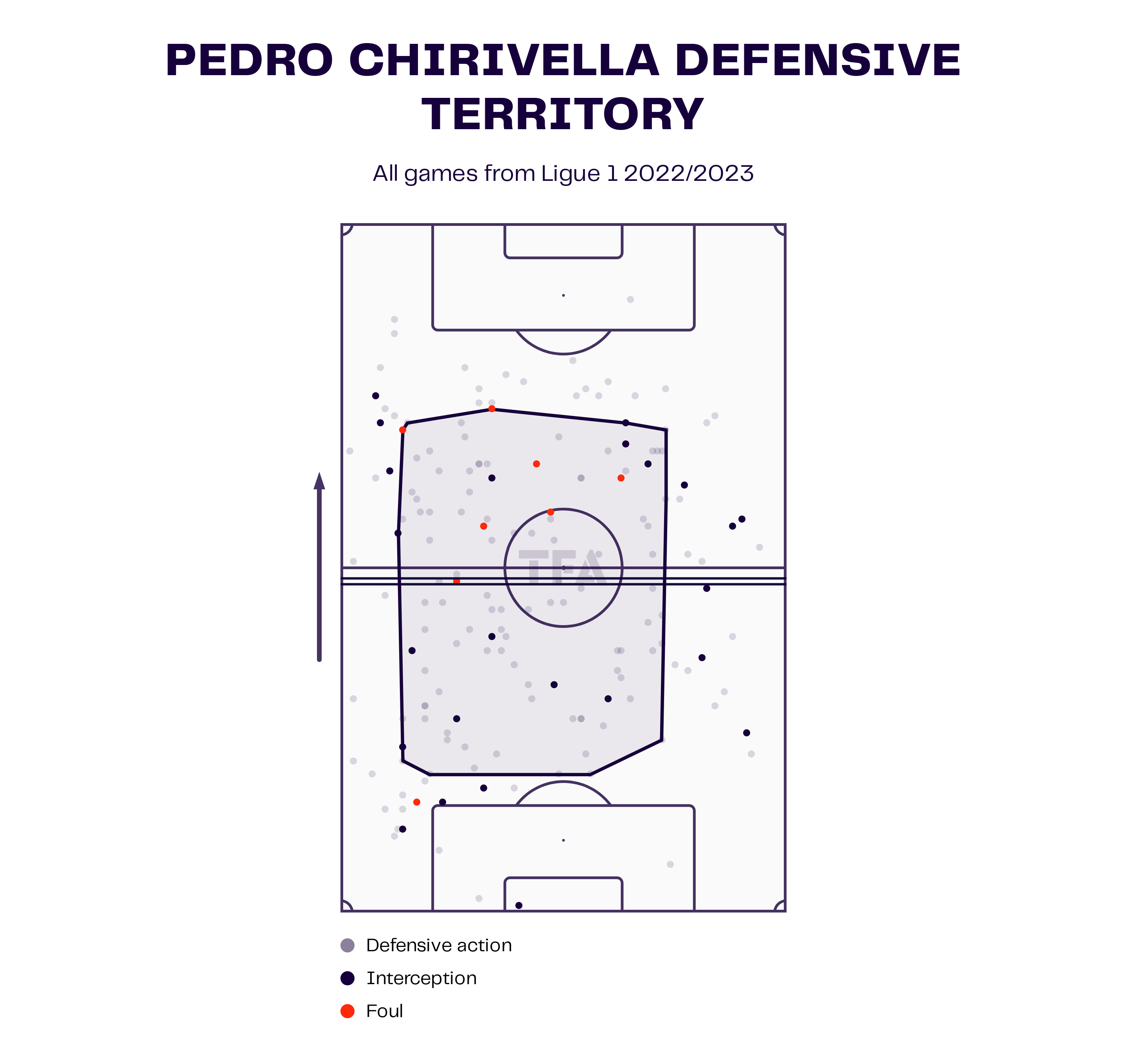 Nantes play with an extremely high backline; they tend to put pressure close to the middle and final third. The above viz shows the defensive territory of the player. It indicates that Pedro is involved in a lot of defensive actions in the middle third and makes interceptions all around the pitch. It can be observed that the player has not given up many fouls and has averaged only 0.55 fouls in the current season. Overall, he has an average of 10.25 duels per 90 and a 59.7% win rate for defensive duels. Pedro averages 2.68 interceptions per 90 minutes. In terms of aerial duels, he averages a win rate of 45.5% out of 0.74 contested on average.

Overall, Pedro Chirivella has been a stronghold in the Nantes lineup. He has been performing his duties in the middle of the park and is a diligent player who likes to act as a calming presence in the midfield. Relegation may remain a threat for the team, with four clubs going down this year, but with Chirivella pulling the strings, Nantes remain a force with which to be reckoned in any given match. The Spanish midfielder has played no small part in that, and his lofty place in this year’s 100 is well-deserved.

Lovro Majer: Top clubs will battle for the Ligue 1 midfielder