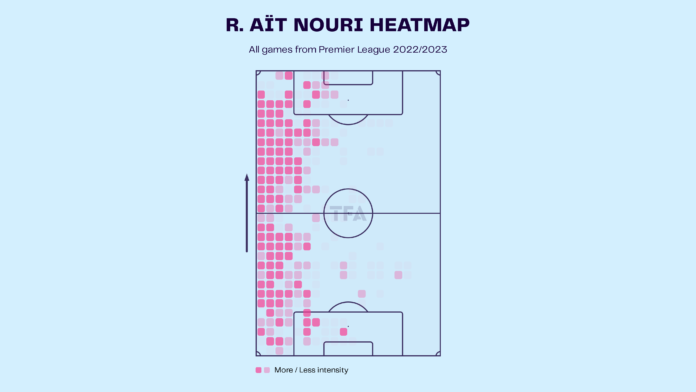 Wolves’ 21-year-old talent, Rayan Ait-Nouri, has gained some French interest in recent times. The most notable interest shown is in the form of potential buyers, Nice. The Ligue 1 club seems impressed by his performances for the English outfit this season. Nouri has made ten appearances for Wolves this season. Nice are currently ninth in the Ligue 1 standings and are hoping to get something out of this season in terms of some European qualification. Below are some stats representing Rayan Ait-Nouri’s performances for Wolves in the English Premier League this season. 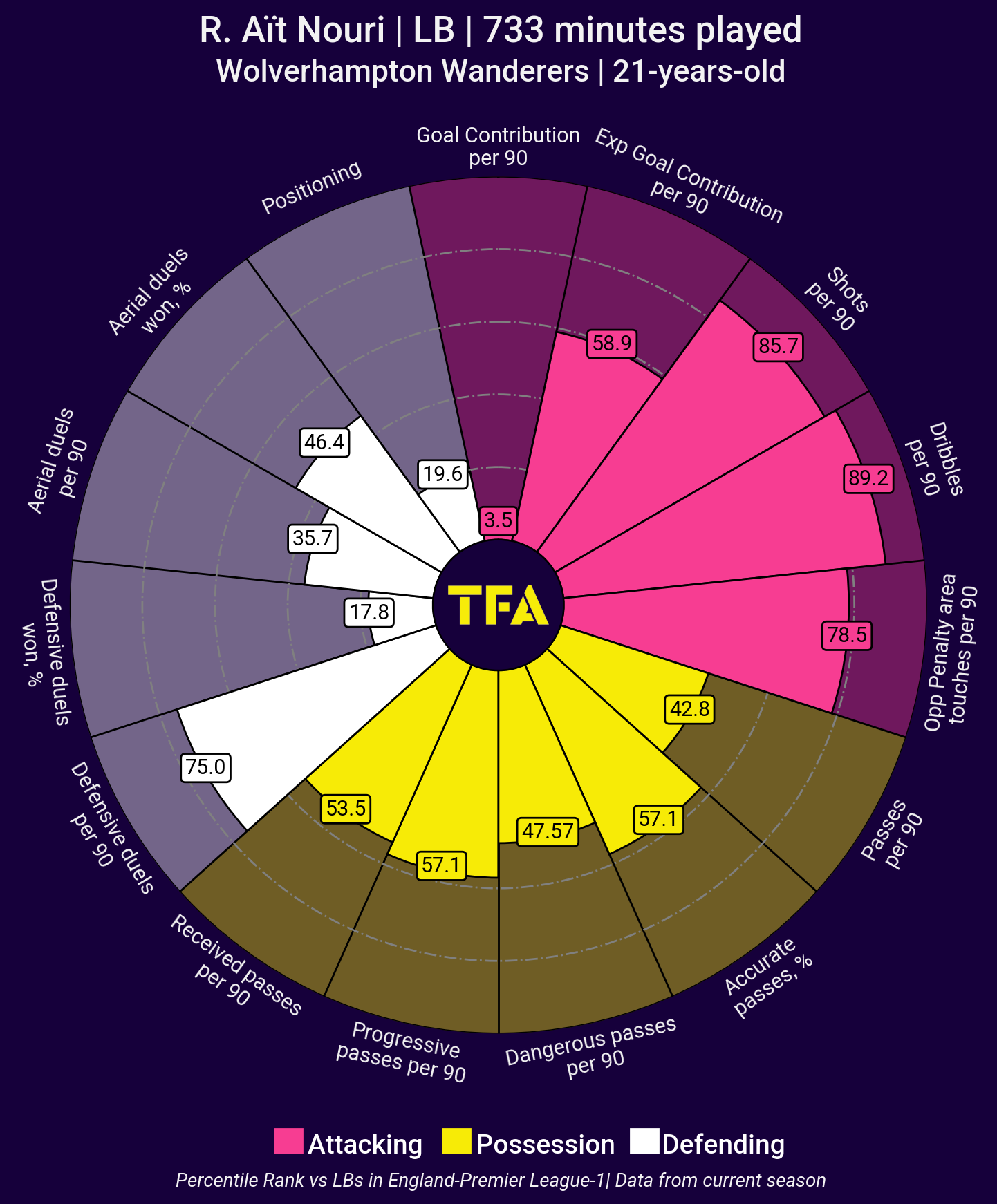 The above graph shows the percentile rank of the player in comparison to the other left-backs in the English Premier League. It can be observed that the ranking in the possession and attacking departments is fair. Nouri has more involvement in terms of attacking. He attempts a lot of dribbles and entries into the opposition’s penalty area per 90 minutes. Defensively, Nouri is weak in aerial and defensive duels despite contesting plenty of duels per 90. That is compensated for as he manages to attempt a high number of shots per 90. 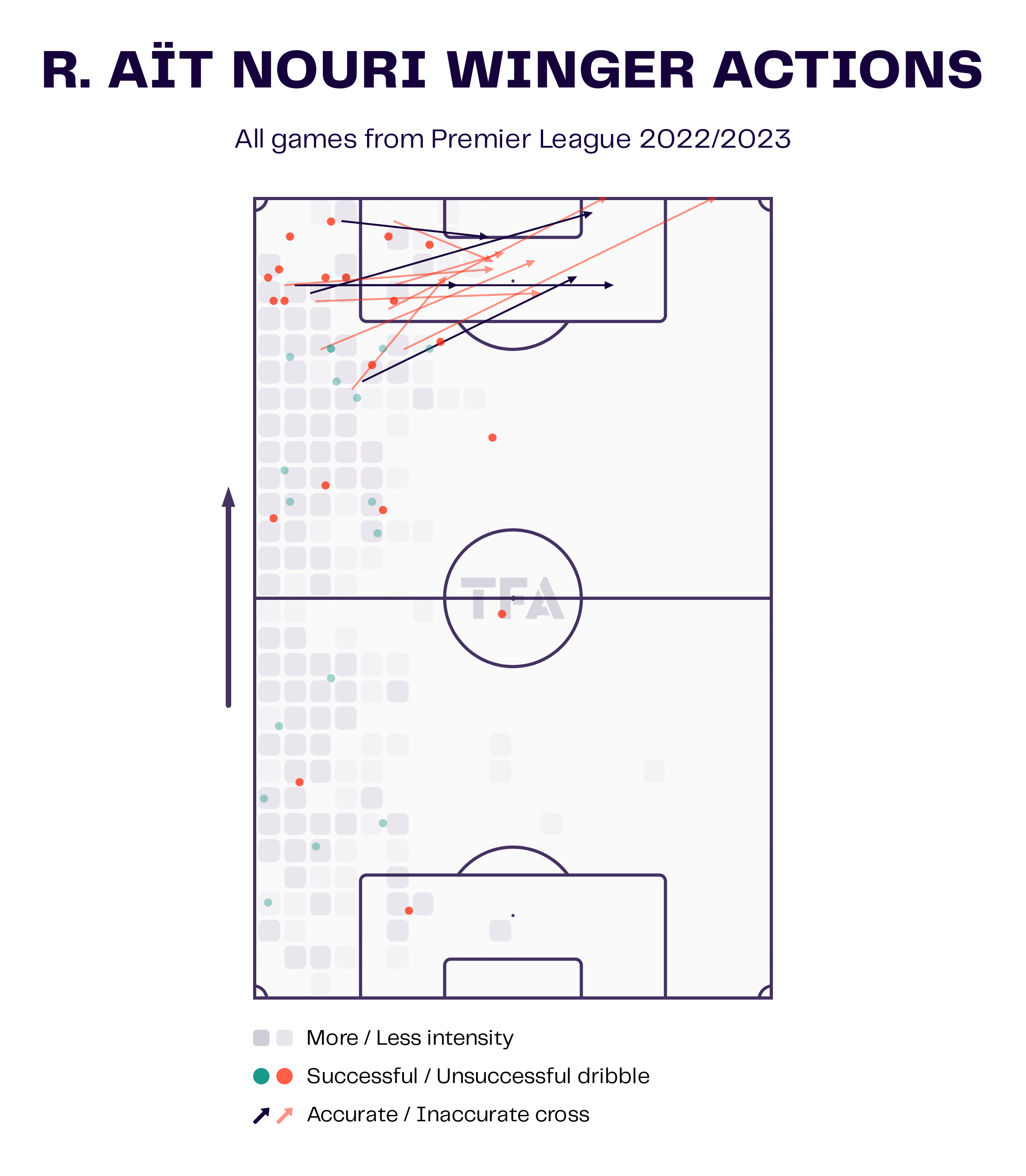 The above viz shows Rayan’s winger actions in EPL in 2022/23. Nouri attempts dribbles inside his defensive third as well as the final third. The number of successful dribbles is decent, and there are many attempts to cut inside from the flanks on the left wing. Additionally, he makes 2.35 crosses on average per 90 with a 26% success rate. 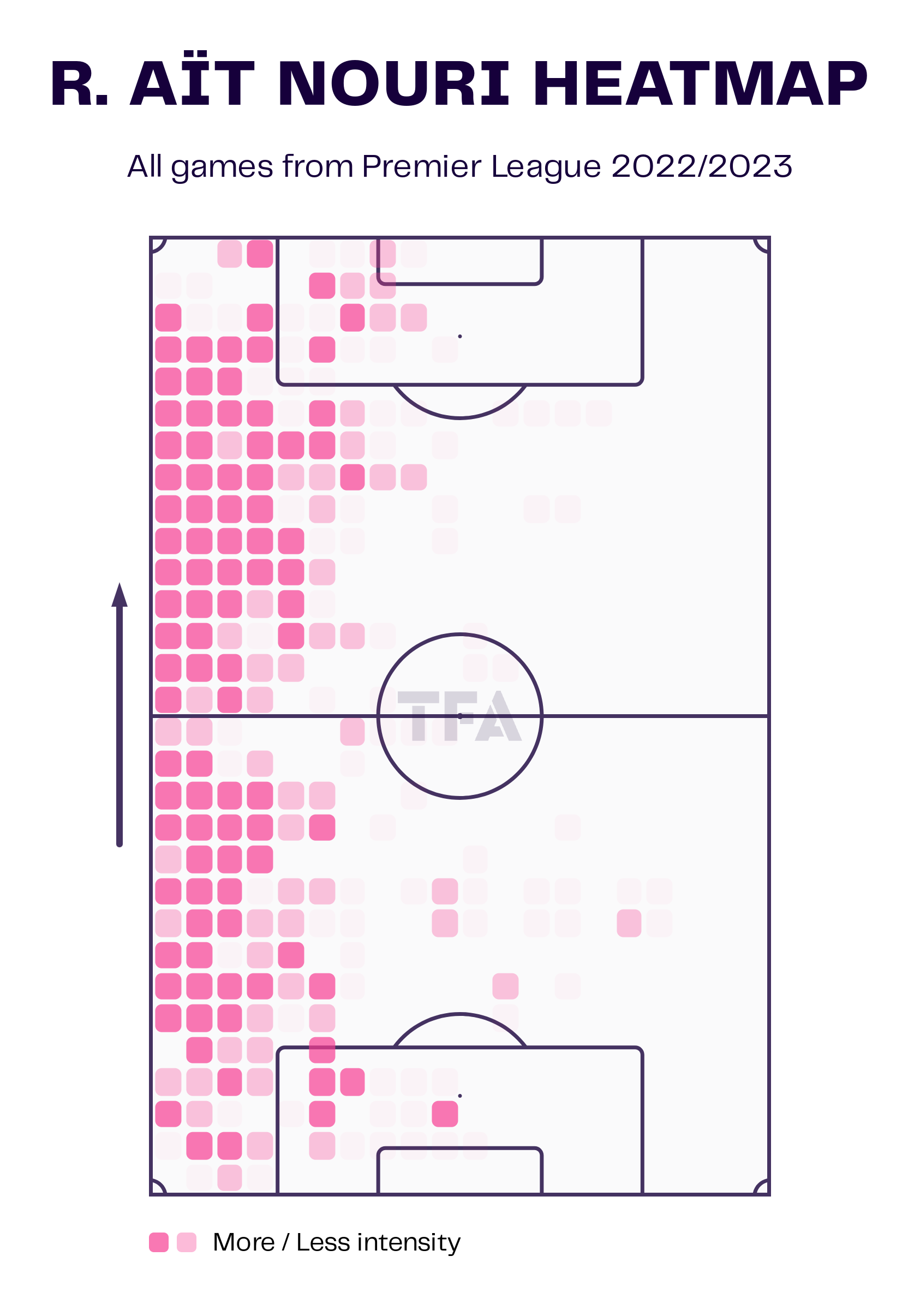 Rayan Ait-Nouri covers the entire left flank of the pitch as a left wingback. He performs fewer defensive duties as compared to his attacking role. Rayan makes 3.47 average interceptions per 90. He also completes 4.7 dribbles on average per 90, for a success rate of 47%. It can be observed from the above that he plays with more intensity in the final third of the pitch. 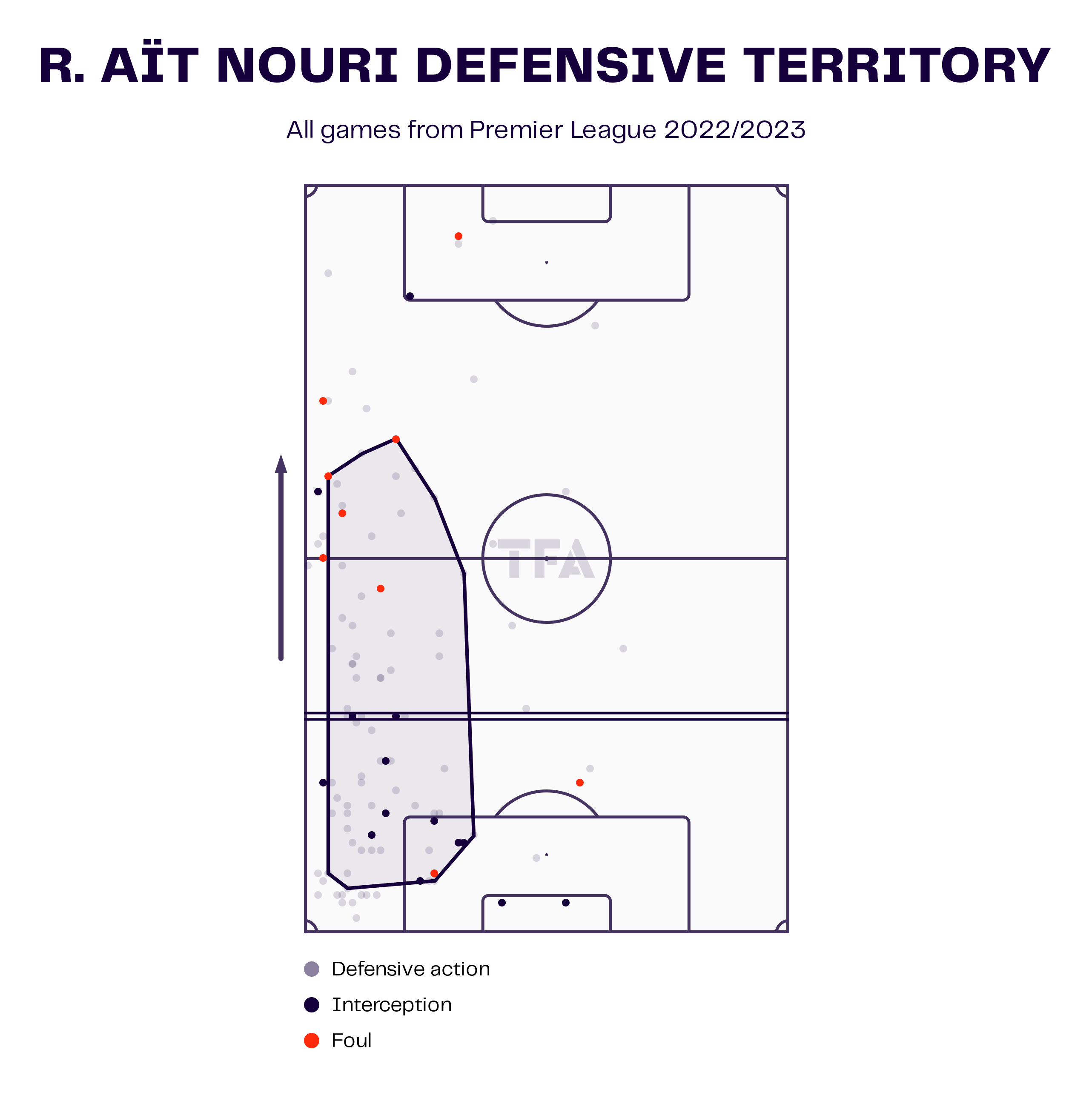 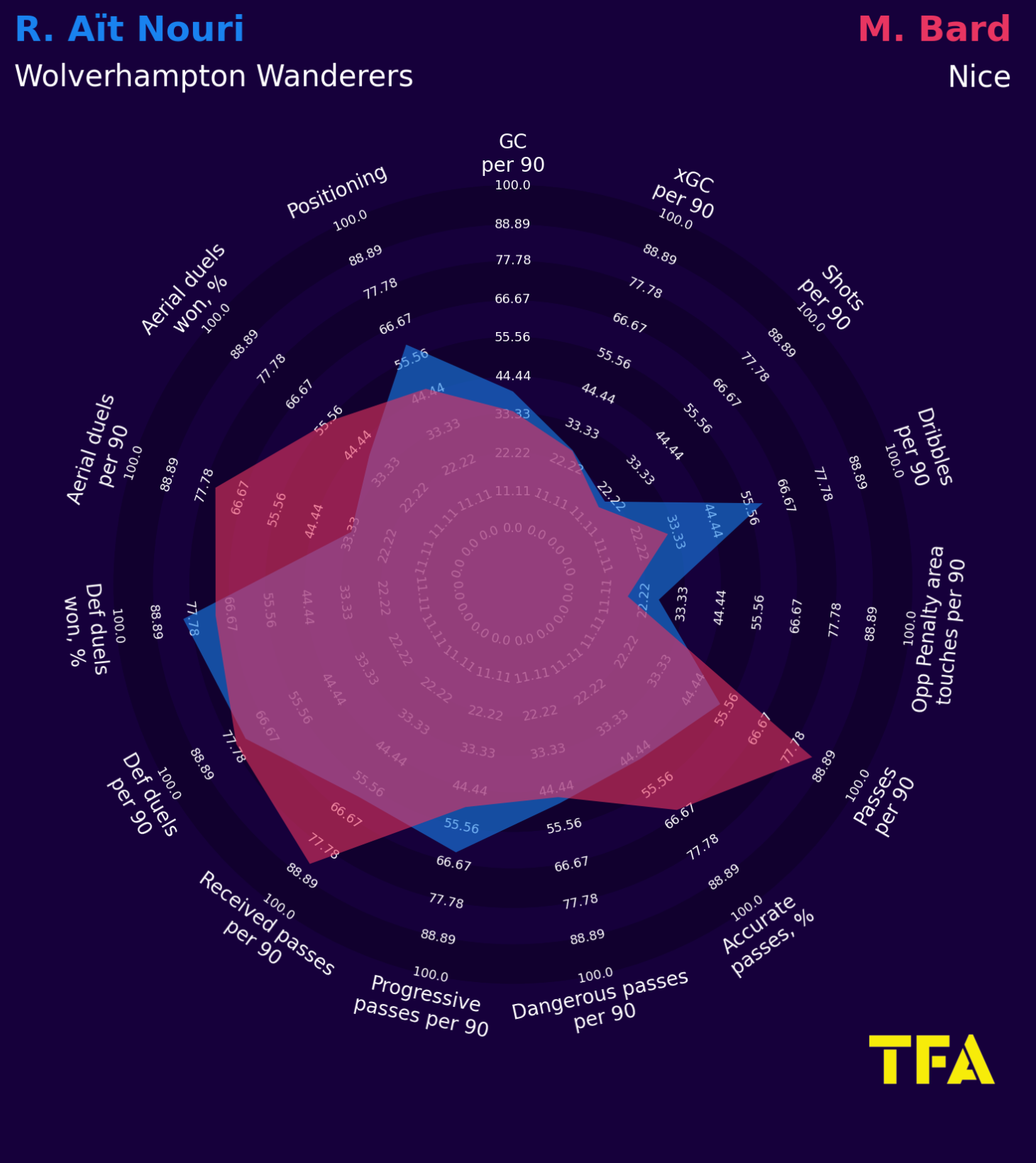 The above viz is a comparison between Nouri and Bard for the matches played for their teams, Wolves and Nice, respectively. Nouri has done well in defence and has better numbers in terms of defensive duels won. Bard, on the other hand, has fared far better in terms of winning aerial duels. Positioning-wise, Nouri is better positioned and also attempts more dribbles per 90. Overall, Nouri is a more dangerous attacking threat down the left flank than Bard.

Overall, Rayan Nouri is a good fit in terms of an attacking fullback for Wolves this season. His performances and stats have been impressive at the moment. His contribution has come primarily in the form of an attacking option for the team who is also able to serve some defensive purposes. Nice will be looking to have such an attacking option in their team.

Transfer Analysis: Why Boubakar Kouyate has earned his way back into...