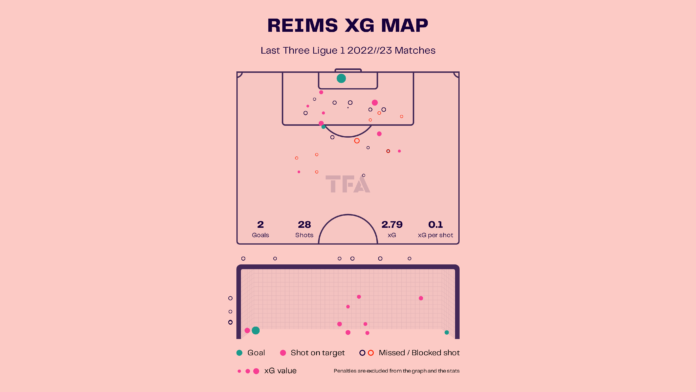 Reims are currently 11th in Ligue 1 2022/23, having taken 25 points from 19 matches. Currently ten points from safety, Reims seem to be stagnant in the league based on their recent performances. They finished 12th last season and are one spot ahead right now, but will need to dig deep to put points on the board. This season in Ligue 1, Reims’s form is average overall with five wins, ten draws, and four losses. This performance currently places Reims 11th out of 20 teams in the Ligue 1 table, winning 26% of matches. Reims’ home form is average with the following results: three wins, four draws, and two losses. Additionally, their away form is considered average as a result of two wins, six draws, and two losses. Reims have scored a total of 21 goals this season in Ligue 1. Below are team stats from the current season. 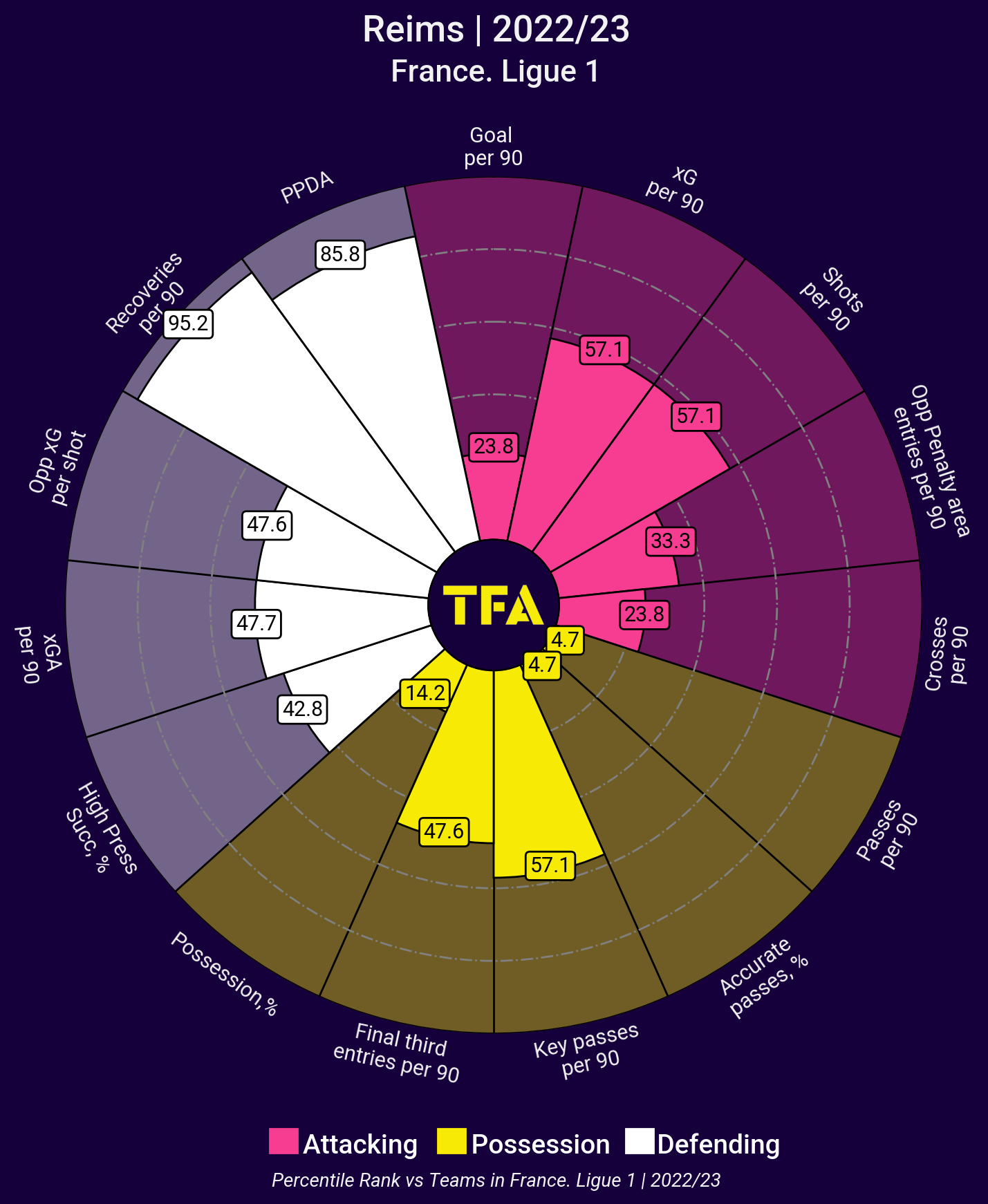 The viz above depicts Reims’ percentile rank in terms of stats when compared to other Ligue 1 teams. It can be observed that the team is struggling to attack. They possess a poor ranking with respect to entries into the box, goals per 90, and xG per 90. Reims are not possession-based and like to sit back. In terms of recoveries and pressing efficiency, Reims excels. Meanwhile, the team is also struggling in defence, with a low rank for expected goals against them per 90. 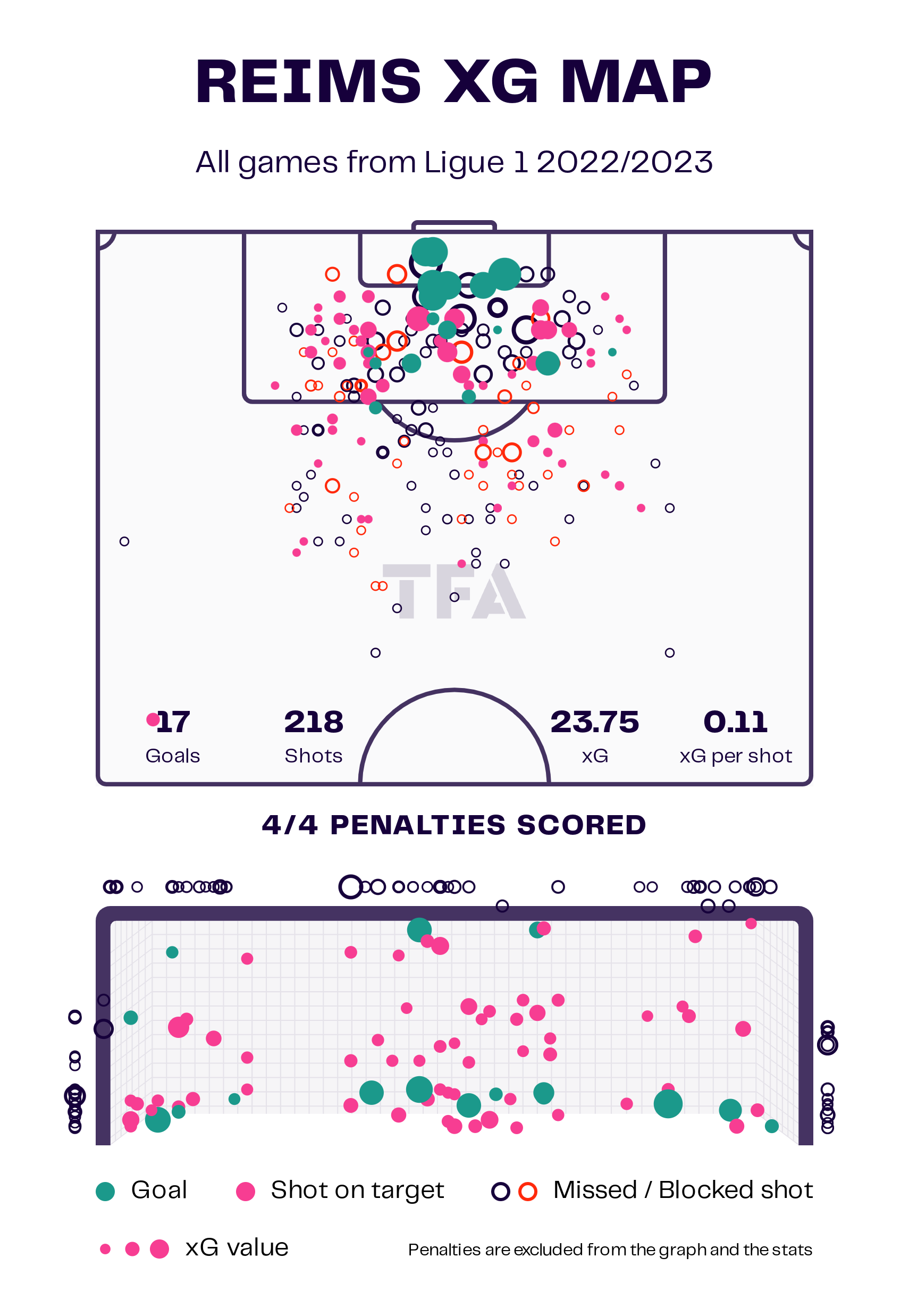 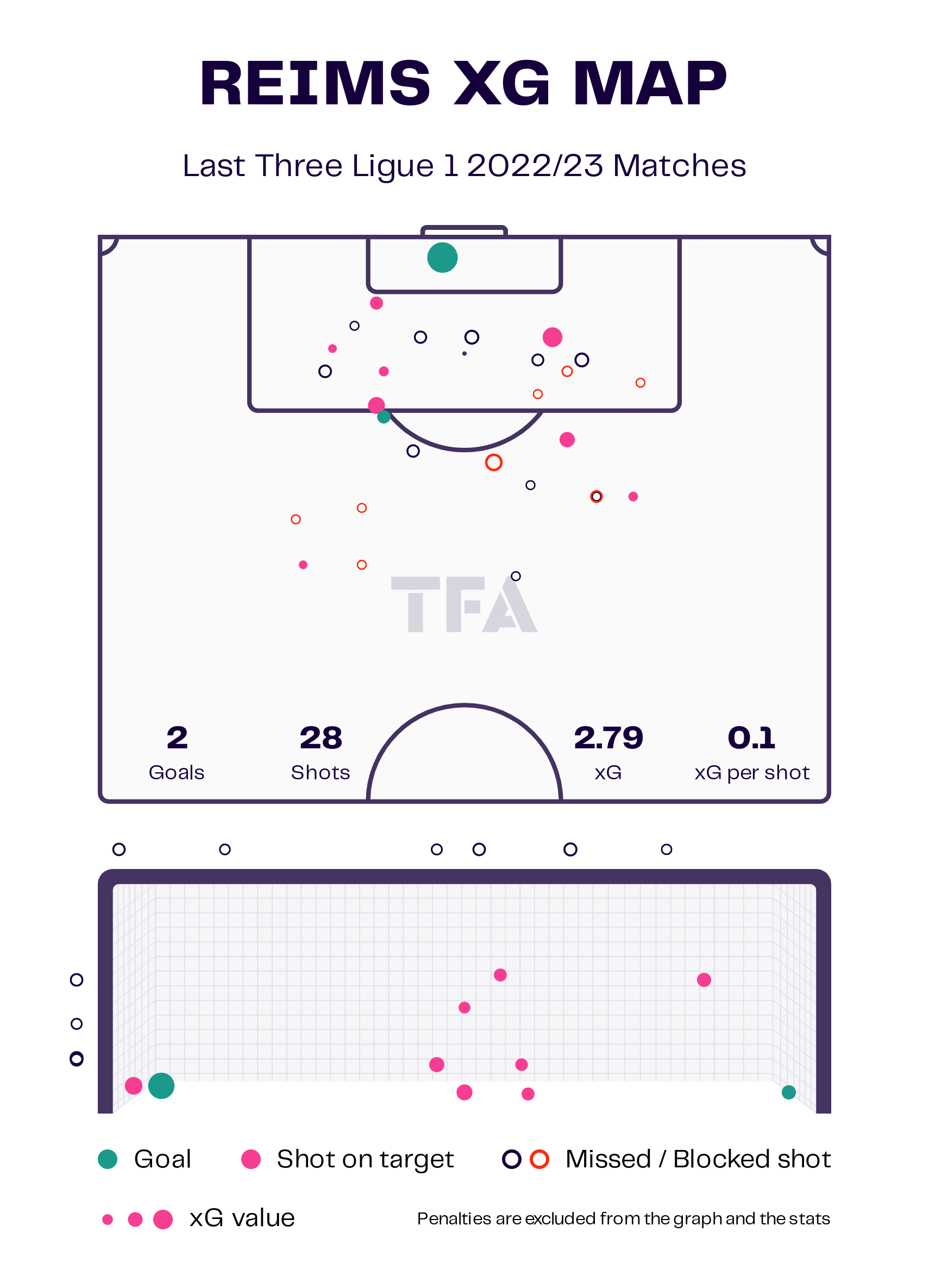 The above viz is for Reims from their last three Ligue 1 matches, in which they have scored only two goals. They drew their most recent game, a nil-all draw at home against Nice, which was a must-win for the team, especially since Nice is now tied with Reims on points and one place ahead in the standings. This shows how the goal difference plays an important role and can have an effect on the psychology of players due to the difference in the ranks. Overall, Reims scored two from a total of 28 shots, resulting in a very low 0.1 xG per shot.

They played against Ajaccio in between and faced Lille in their first match of the new year, both of which were away from home. Reims took 11 shots against 18th-placed Ajaccio in a 1-0 victory, of which only one was on target. In contrast, they managed eight out of thirteen shots on target against Lille in a one-all draw. 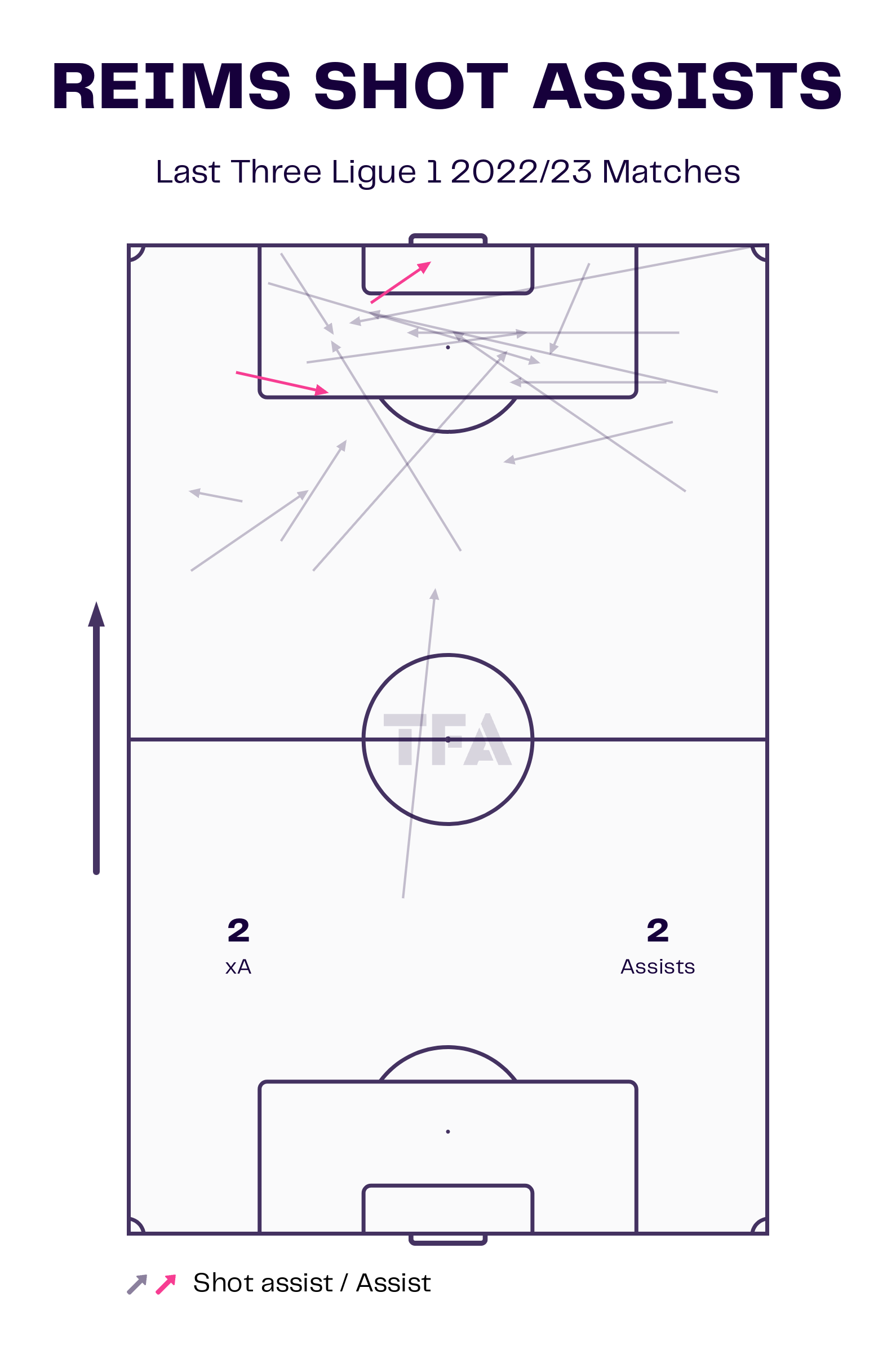 The above viz shows the map for assists made by Reims in their last three Ligue 1 matches, and it can be seen that they have managed to provide two assists with an overall xA of two. Again, the main reason behind their failure to get more goals and score, especially versus Nice, comes down to their lack of determination to produce an efficient attacking display. The team averages 26.5 positional attacks per 90 minutes, with only 26% of them ending in shots. Even though they tend to play on the counter, they make only 2.5 counterattacks per 90 and usually try to take control of the game after winning the ball from the opponents. 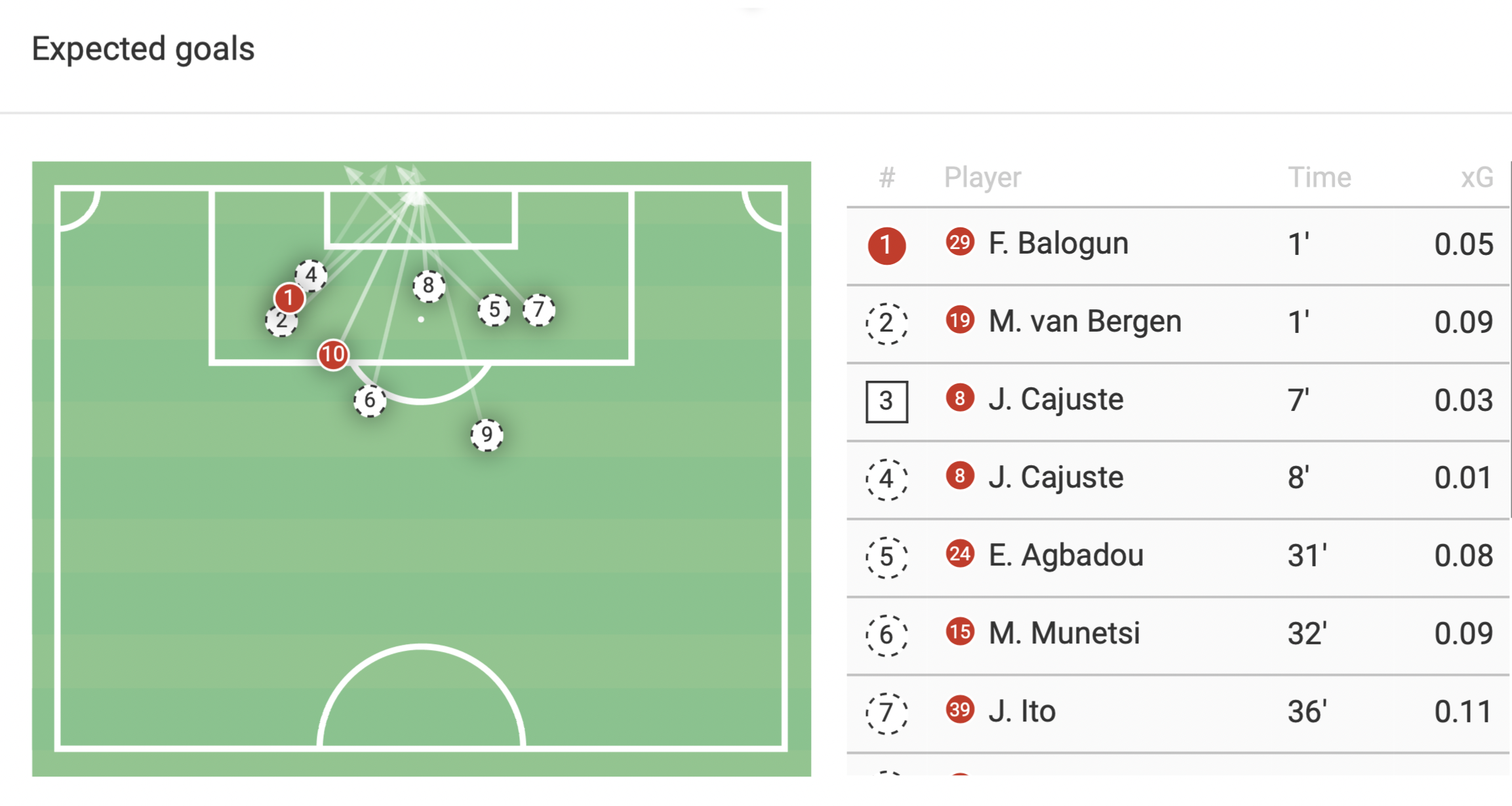 There was no winner between Reims and Nice, but the loss was Reims’ to bear, especially in front of their home fans. They took 13 shots against Nice, of which only two were on target, whereas Nice took five shots with four shots on target. Although Reims started the match as favourites and put pressure on early, they were never able to find the back of the net. They attempted most of their shots from inside the box, and Florian Balogun looked the most threatening for Nice’s defence.

Reims finished the match with an xG of 1.1 but never showed any major intent to keep pushing. They had 46% possession in the game and were able to complete 420 passes. Reims have an average xG of 1.11 this season, which is just enough to keep them floating in the middle of the Ligue 1 table till the end of the season, but they need to increase their output and fulfil their potential. 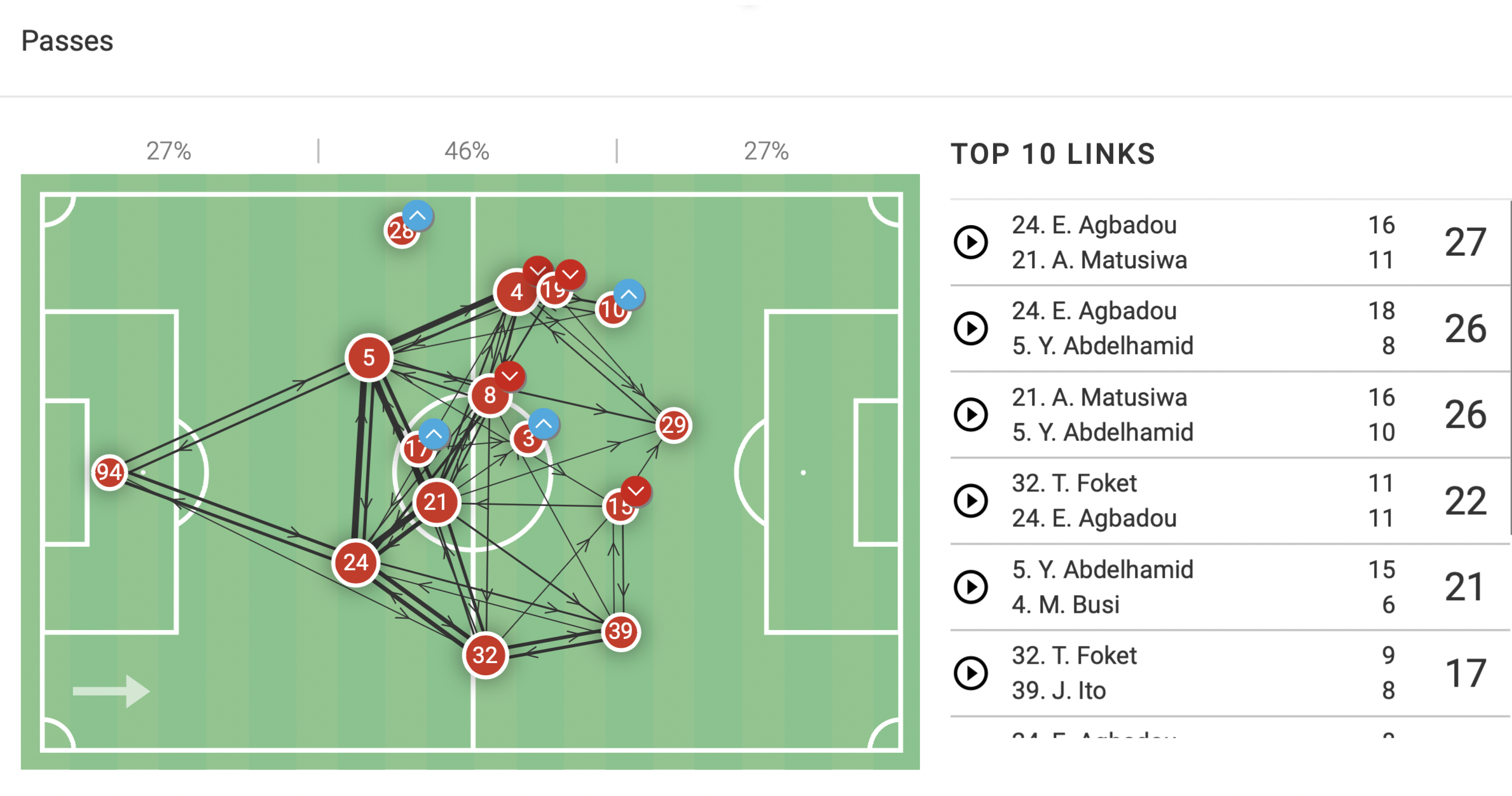 The above visuals depict Reims’ pass and shot map for their most recent Ligue 1 outing against Nice. The team can be seen playing in the middle third of the pitch, with the backline in their own half. They play with four at the back and make sure to maintain passing lines with the midfield and forwards. Most of the involvement is between the centre-backs and defensive midfielders. Reims must try to move their game further up the pitch in a more sensible manner after losing the ball 69 times in the final third against Nice, demonstrating failure in attacking and penetration. Reims made 60 passes to the final third out of a total of 500 passes attempted.

Reims in defence this season 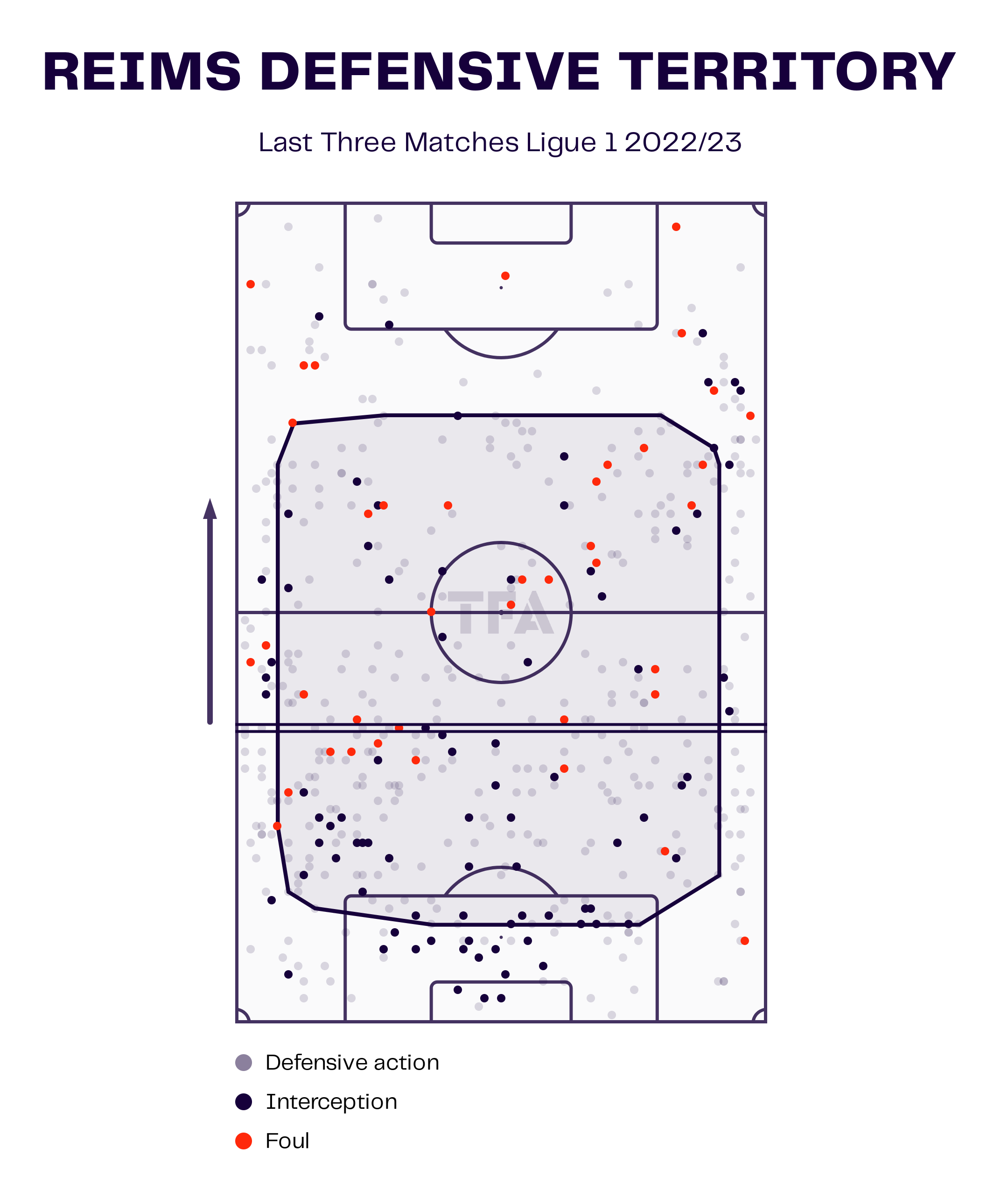 The above viz shows Reims’ defensive territory from their current season in the French top tier. Reims have conceded a total of 23 goals (26.0 x GA). The team makes 86.5 recoveries per 90 minutes and 47.4 interventions, which is slightly better compared to their opponents this season. They haven’t given away any dangerous fouls, but they average 12.9 fouls per 90 minutes. They win 61.3% of defensive duels and 44.9% of aerial duels contested. They do not perform much defensive action in the final third, as can be observed.

Overall, Reims are currently in a dilemma in Ligue 1, having not only lost their last three games but also missing out on opportunities to grab points. They will draw motivation from their last two results to shift the momentum and register more positive results on the board. The team will have to work on its offensive lapses for a turnaround in fortunes and progression in the top flight.

‘The new Kanté’ – Santamaría has been immense for Angers